One Toyota Corolla for the price of basically two. That’s the deal Autopian reader Max got offered recently at a California Toyota dealership in his quest to secure a 2023 GR Corolla. He could’ve taken the car home, but the dealer markups would’ve meant paying an additional $19,995 in the “limited market value” adjustment alone.

In case you’re curious, that’s not terribly far off the price of a new, base-trim Corolla, which starts at $21,550 before delivery.

Toyota’s three-cylinder, 300-horsepower demon-hatch starts at $35,900, before delivery. The final price for the car Max got offered was more than twice that at $77,597 after taxes and fees. 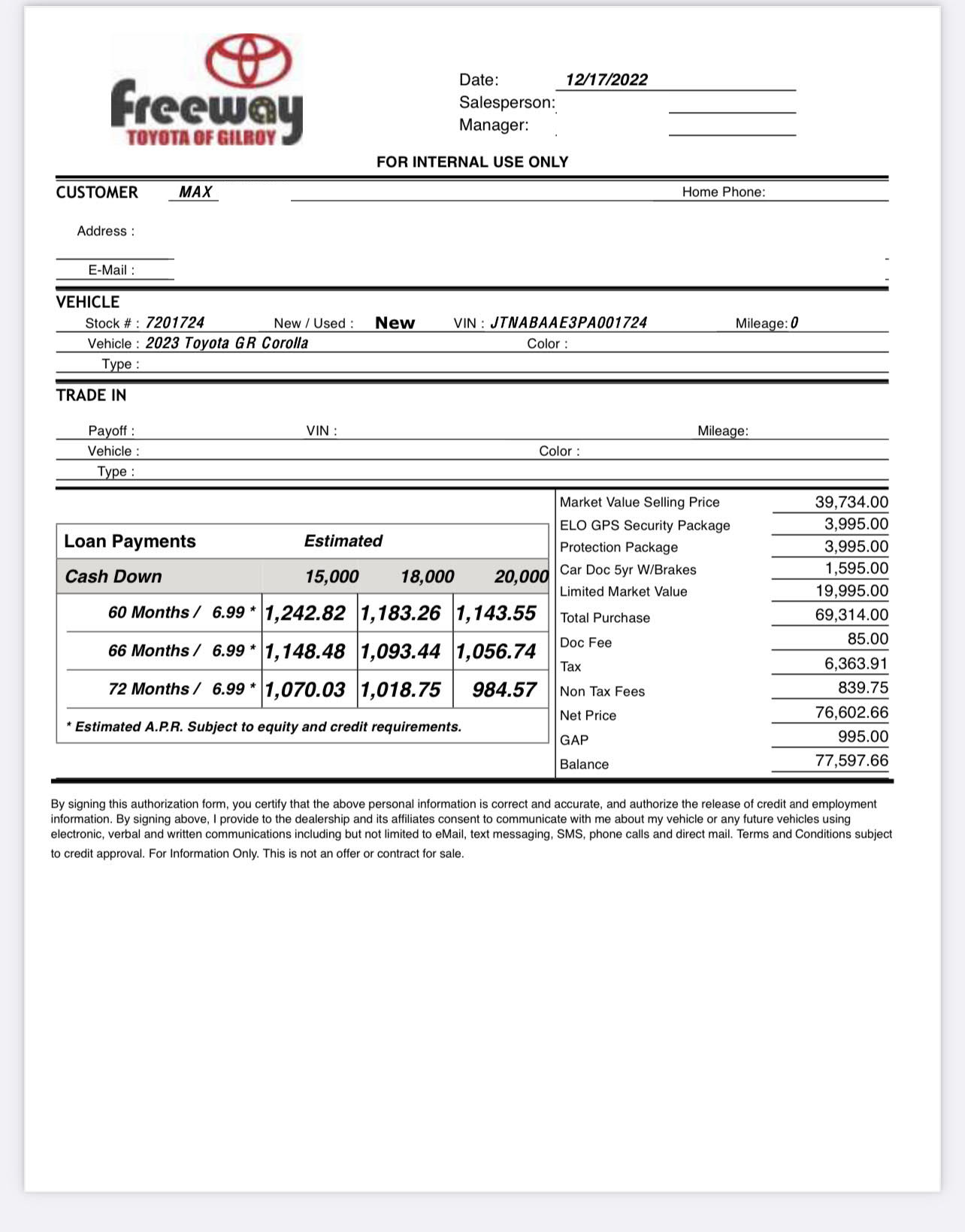 Perhaps needless to say, Max didn’t pull the trigger and remains GR Corolla-less as of this writing.

“I’m not into this markup game with dealers,” said Max, who is based in Santa Cruz, California. (He asked that his full name not be used for this story.) “I’m happy to pay for some B.S. extras but not a 25% markup, regardless of the vehicle.”

Max said he’s been in the market for the GR Corolla since it launched. “My local dealer called me first and offered me a base with a $10,000 [Additional Dealer Markup.] I offered to purchase another vehicle and they wouldn’t budge.”

So he said he started calling around until he found Freeway Toyota in nearby Gilroy. When he did, he said the dealer told him one such car was coming in. He said he was prepared to put down a deposit down for it.

“On the phone, I asked for the specs and if they were going to add a markup,” Max said. “The saleswoman said she couldn’t give me that info but would send me a proposal and the build sheet.” Max said he then received what he considered a “ludicrous proposal.” You can see their text message exchange below: 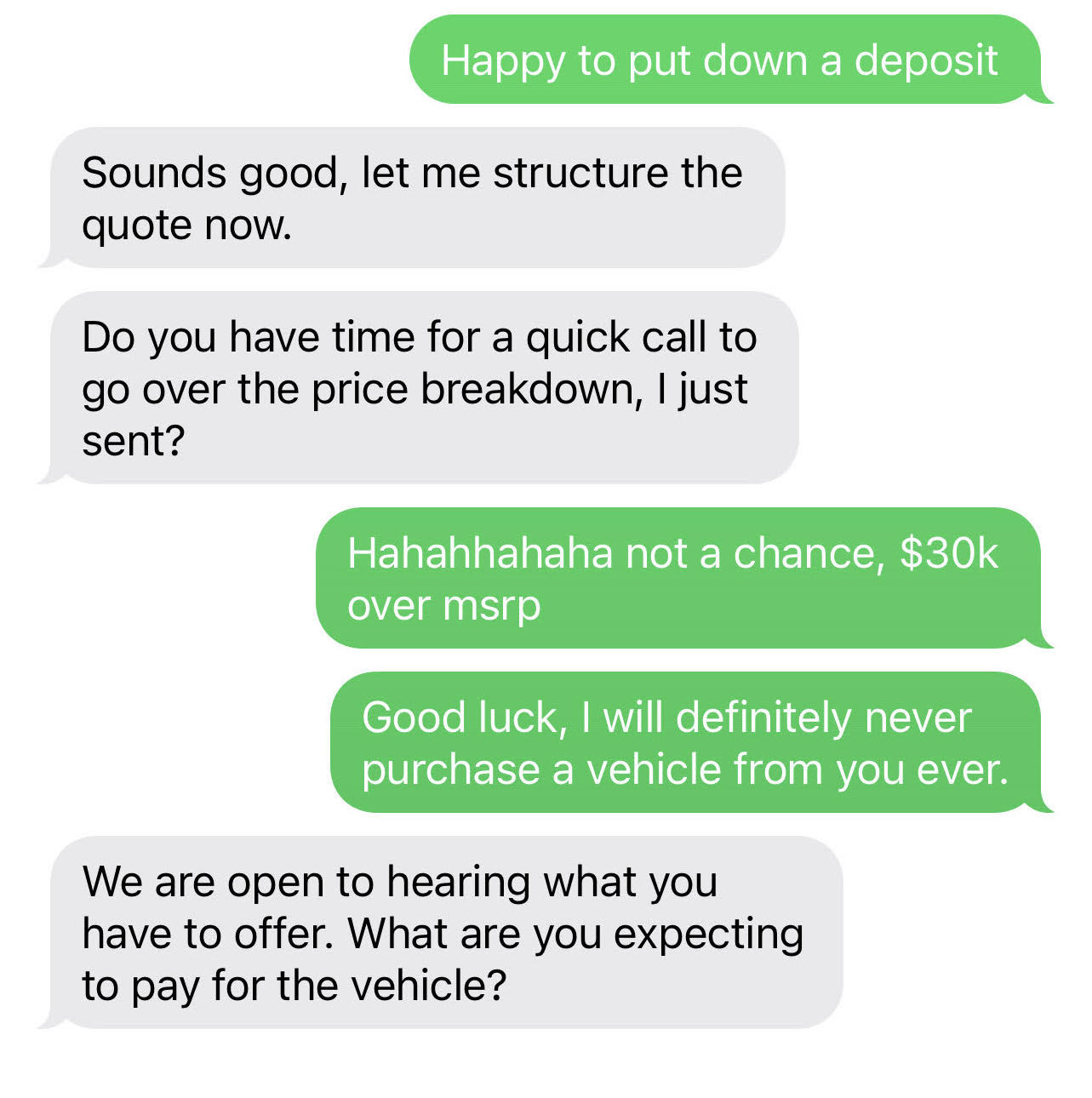 Freeway Toyota of Gilroy and its sister store, Freeway Toyota of Hanford, have not responded to multiple calls and an email seeking comment from The Autopian over the past two days. Additionally, the name of the salesperson listed in the text messages and sale quote document—whom we aren’t naming to protect their privacy—matches the name of a salesperson listed in multiple Google reviews of the dealership.

Granted, dealer markups on hot cars—especially limited-production performance cars aimed at enthusiasts—are nothing new. Only 6,600 GR Corollas will go to U.S. dealers for the 2023 model year. But prices have really gone bananas, to use an industry term, over the past year or so, thanks to COVID-19-related supply chain disruptions, inflation, skyrocketing car prices and limited vehicle supplies.

The GR Corolla has already seen its fair share of this. CarScoops reported in November on one such hot hatch in Maryland with an alleged 50% markup. Other new cars recently caught up in markup mania include the new Nissan Z, the Ford Bronco Raptor, and the new Honda Civic Type R, according to Road & Track.

The markup situation has gotten so wild that folks in the forums have started compiling lists of more scrupulous dealers willing to sell GR Corollas at MSRP and without markup. If you really want one of these, you should probably consult that list, and be potentially ready to travel a bit to get the deal of your dreams.

Above all, some good advice is to do what Max did: don’t be afraid to walk away from a terrible deal. It’s hard to justify a GR Corolla—and it’s a fantastic, fast car, but still a Corolla—at $50,000. At nearly $80,000? Forget about it.

But for Max, the ongoing markup situation is a disappointment for anyone who got excited about the GR Corolla—a rare modern foray into the performance car market from Toyota, and one with a unique engine packing a lot of speed for what’s supposed to be a reasonable price tag. But many dealers are working to make sure they get their cut at the buyer’s expense.

“As an automotive enthusiast, it’s upsetting when manufacturers listen to the desires of enthusiasts, just to have dealers price out the folks who originally created the demand in the first place,” Max said.

The 2023 Toyota GR Corolla Morizo Edition Is A Lightweight Version Of The GR Corolla With No Rear Seats, No Rear Window Motors, And No Rear Speakers

Editor-at-Large at The Autopian.
Read All My Posts »
PrevPreviousThe Citroën CX Familiale Holds A Ridiculously Specific Automotive Record
NextWhen Should You Try To Swerve To Avoid A Crash?: Comment Of The DayNext