This Is How I Made Special, One-Of-A-Kind Motor Oil From Scratch

If you think about it, we live in an era that generally has a lot of great access to exciting, small-batch-created fluids. There’s tons of small local breweries, there’s local farms selling milk and chicken juice, coffee shops that will brew up obscure beans, you name it. So why shouldn’t your car enjoy the same liquidy fruits of the craft-liquids movement? They should, and as a way of proving this, I got noted oil-maker Valvoline to help me whip up a batch of special, bespoke one-of-a-kind motor oil for our own David Tracy and his 1958 Nash Metropolitan.

You know what I like about the name “Valvoline?” It reminds me of “Vaseline,” but with “valves” in it, conjuring up images of Vaseline-slathered valves, which really isn’t such a bad image for a company that makes motor lubricants. Anyway, Valvoline invited me out to their top-secret New Product Development Lab located on a small private island off the coast of Kentucky, where I worked with two of Valvoline’s finest scientists, Dr. Michael Warholic and Sarah Razor, who helped me develop a batch of oil specifically designed for David’s Nash Metropolitan. 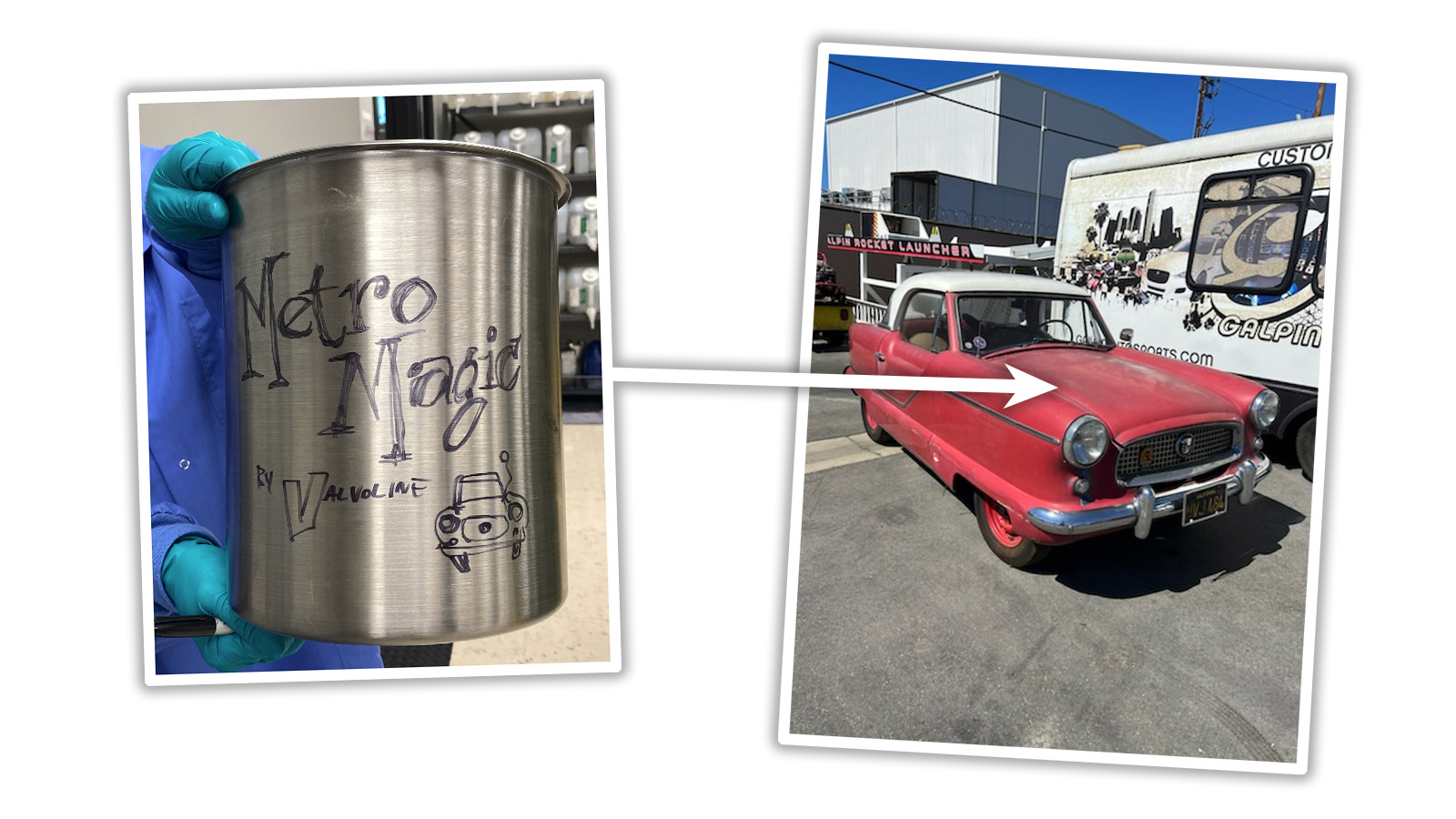 Luckily for you, we were granted special permission by Emperor Viscous T. Valvoline himself to video the process:

If you’re wondering why Valvoline would invite filthy me out to their nice, clean lab (they also paid for a relatively oil-free hotel room for the night, and we get the six quarts of oil we made for free) it’s because they’re very proud of a very specific claim: that their oils provide “24X stronger protection against engine-killing contaminants than the industry-leading full synthetic motor oil.”

I’m all for anything that stops engine-killing in general, and here those contaminants are water, fuel and ethanol, none of which are any good at lubricating. Valvoline scientists even showed me these vials to prove their claim: 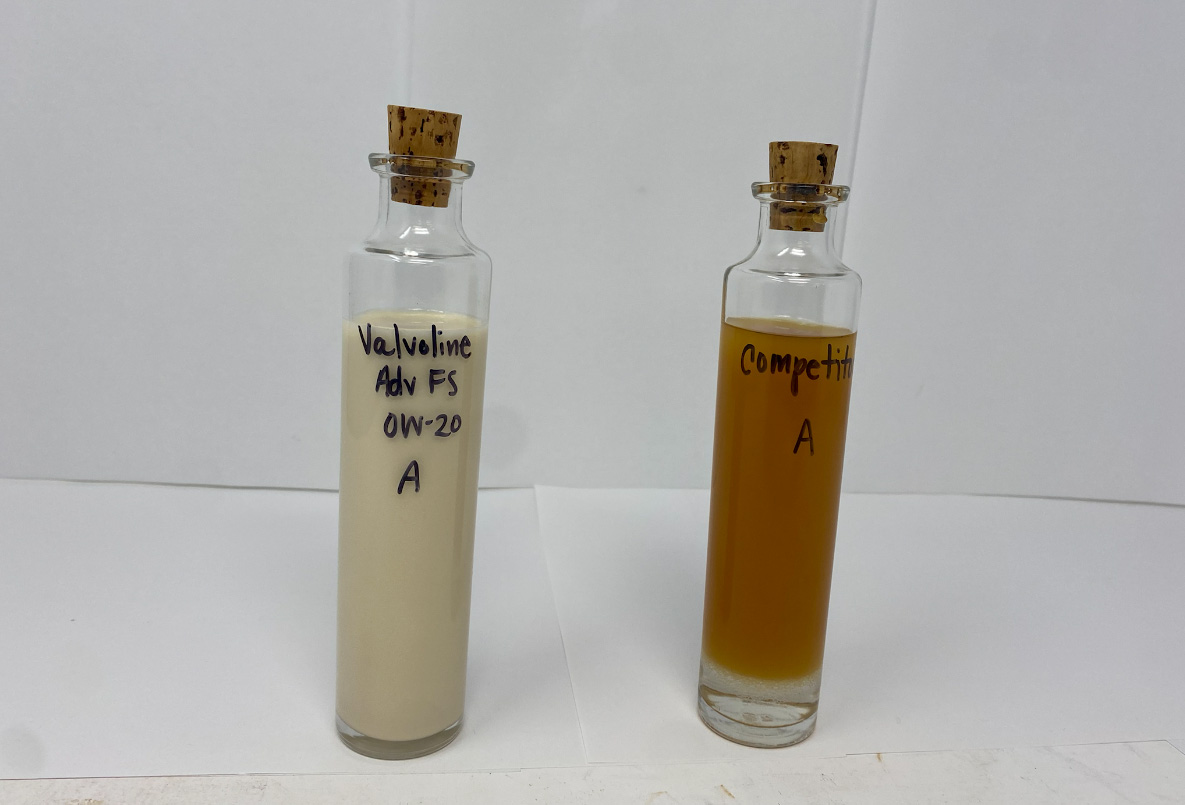 What you’re looking at here is a little counter-intuitive, because that milky-looking oil is what you want. You see, both samples have been contaminated with water, and left to sit overnight. The Valvoline oil looks like a creamery milkshake because it has effectively trapped and diluted the contaminants throughout the oil, which is still a highly effective lubricant even in this state. The other oil has separated completely from the water (look at the bottom) so while the oil is pure, so is the non-lubricating, non-compressible water, and that will get into places that desperately need oil and cause all sorts of damage. So that makes sense.

I called the six quarts of oil we brewed up Metro Magic, because it’s specifically tailored to the demands of that ’58 Metropolitan. The old Metro’s engine is a little 1.5-liter Austin B-series engine, and pretty much everything inside that engine is well-worn. David was specifically concerned about the pushrods and valve tappets, which is why he requested an oil with a lot of zinc.

I mean he wanted a hell of a lot of zinc in there. Where a normal, high-zinc motor oil may have 1200 ppm (parts per million) of zinc, David wanted 2000 ppm. The reason, which Dr. Warholic explained to me, is that the zinc is great at coating parts and forming what he called, with a solemn, respectful tone, a sacrificial layer. This layer of sacrificial zinc takes the wear and abuse instead of the metal it’s covering, so it’s ideal for mitigating wear in old engines.

This oil also needed to be thick and viscous, because tolerances in old engines are much looser than modern ones, so the oil was made to be 20W-50 weight, about as thick as mainstream motor oil gets unless your plan is to pour it over pancakes.

Dr. Warholic also explained exactly how viscosity works in a way that I finally understood: the reason some oils are more viscous (thick, slow flowing) than others has to do with the chains of carbon molecules in the oil. If those chains are long, they tend to get in one another’s way more, and so the flow of the oil gets impeded, and slows down.

If the oil has shorter carbon chains, they physically don’t get in each other’s way as much, and the oil flows easier. In my head I thought about this like logs floating in a river. If there’s a lot of long logs, they don’t flow quickly at all:

That makes sense, right? Viscosity is just the difference between how logs and rubber duckies flow, and any decent scientist should agree.

It’s not just the zinc and high viscosity of this oil that makes Metro Magic great; it’s also the best quality oil you can get, and I mean that literally. You see, all oils start with a base oil, which is just the refined oil that comes out of the ground, but not all base oils are equal. In fact, there’s four groups of base oil (well, technically five, it seems) and the groups are categorized by how much refinement they get. This was explained to me on this sheet of paper by one of Valvoline’s helpful science-elves: 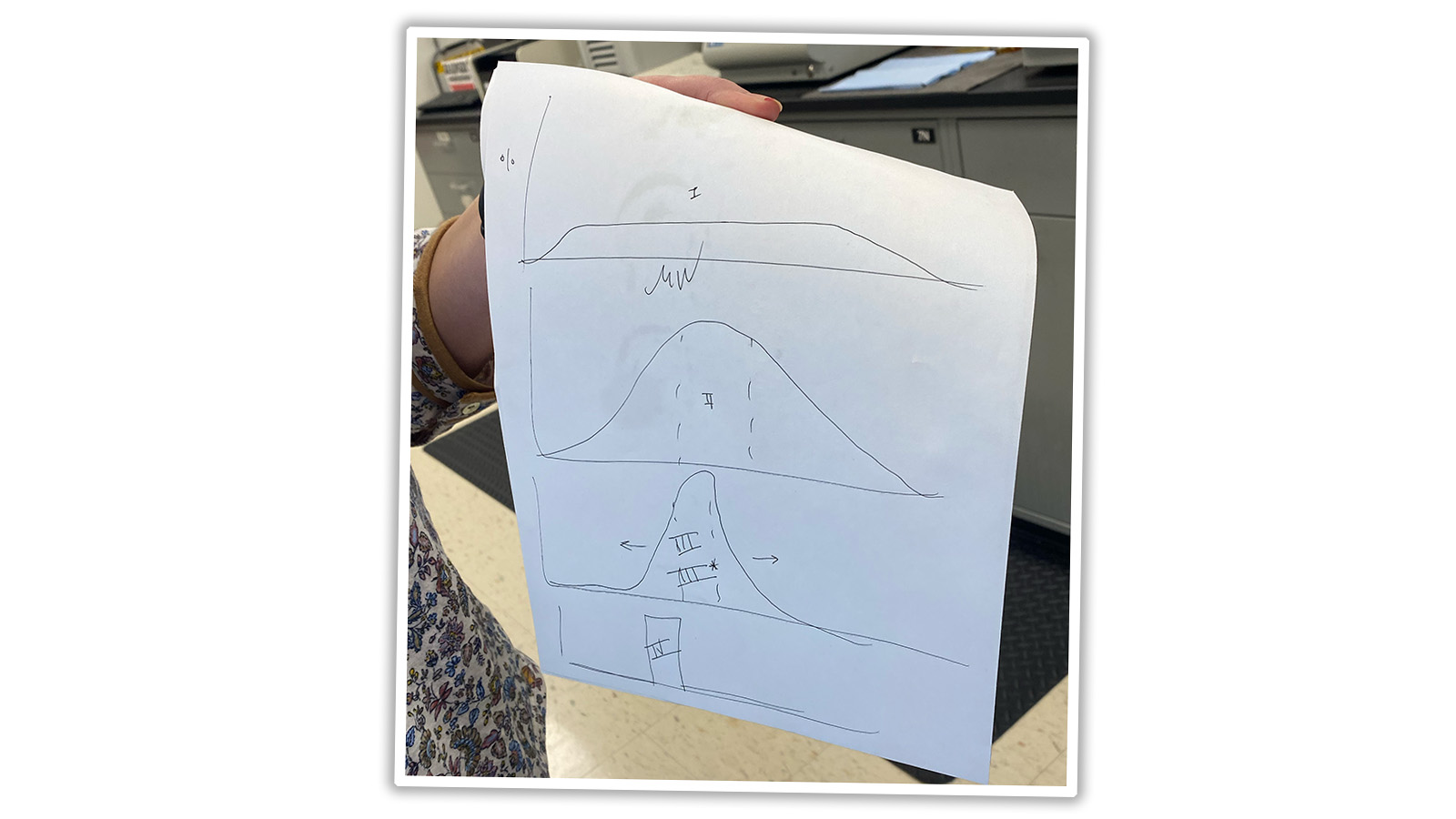 What those curves are showing is what percentage of the base oil has the qualities that you really want in your oil, and the oil that does is in the center of the curve. Group I takes the least refinement, and as such that curve is pretty flat, with about as much being to either side of the ideal zone, so you end up with a pretty low-grade, cheap oil.

More refinement gets you to Group II, which at least has a good amount in the ideal zone, but it’s still a pretty gradual ramp up and fall-off. Group III is refined even more, with high pressure and heat, to get most of the oil in the ideal zone, making a purer base oil.

And finally we have Group IV, which is refined into a synthetic oil known as a polyalphaolefins (PAOs) oil. As you can see on that ball-point graph, it’s pretty much all the good stuff. And that’s what we used as the base for Metro Magic.

Oh, and we also dyed it purple, so David will know he’s putting in the Good Stuff, and when it inevitably will slowly leak out of that Metro’s crankcase, he can stain his driveway with festive violet stains instead of boring, ordinary black oil stains.

This is some incredible oil the Valvoline team crafted up for us. If you had to buy it in stores – which, again, you can’t – it would be really expensive, and a cheap-ass like David would never buy it for his old Metropolitan.

But he doesn’t have to buy it, so the oil is being sent to him, and once he gets that thing going, it’ll be full of Metro Magic. The plan is to let him run it for a number of months or miles, and then send an oil sample to a test lab so we can see just how incredible the Metro Magic actually worked.

My prediction? A few quarts of this in the Metro’s engine will take horsepower from around 50 to, oh, 240 or so. And fuel economy will get up to about (messes with slide rule) 48 mpg city, 65 highway. These are just my guesses, based on a complex mathematical process called “making shit up.”

This whole process was fascinating. I’d hardly thought about motor oil, but now I realize what a rich and complicated and interesting subject lubricants are. I can’t wait for David to decant that sweet, creamery purple oil into that little car and see how it does, knowing that I pipetted the zinc into it with my own rubbery gloved hands.

I'm a co-founder of the Autopian, the site you're on RIGHT NOW! I'm here to talk to you about taillights until you cry and beg me to stop, which I absolutely will not. Sorry. Hug? Also, David's friend.
Read All My Posts »
PrevPreviousThe Fastest Dodge Last Call Special Editions Carry Lofty Six-Figure Price Tags
NextSomeone Turned A Smart Car Into A Tiny Off-Road Camper And It’s Not As Ridiculous As It SoundsNext