Something amazing has popped up on my YouTube recommendations, and it might just be one of my favorite DIY camper builds to date. Someone took a Smart Fortwo and transformed it into an off-roading tiny camper. And it’s not nearly as ridiculous as the premise sounds! I almost want to replicate this Smart car myself!

Back in 2018, I took my 2012 Smart Fortwo off-roading for the first time. Taking that little car off-road wasn’t just fun, but it legitimately changed my life for the better. At the time, it seemed like taking a Smart off-road was a rare concept. Sure, there was (and still is) a lift kit available for the Fortwo, and I’ve seen a number of lifted Smarts. But I’ve never really seen a Smart actually get dirty off-road. Most of the folks that I knew with the lift kit did it to get more clearance in the snow.

But times have changed, and it seems that more and more people are discovering that the little Fortwo is an off-road underdog. I can state with firsthand experience that the car’s practically non-existent front and rear overhangs means that you can clear all kinds of obstacles if you’re careful. Plus, the tiny footprint allows you to dodge things that you can’t get over. Of course, these cars are still just rear-wheel-drive, but in my experience, if you’re careful you can get a Smart almost anywhere a two-wheel-drive Ford Ranger will go. A good set of tires and a lift will only make it more fun.

I’ve even seen convertible Fortwos with doors removed like a Jeep Wrangler and even a convertible with chopped doors sort of resembling a modern interpretation of an old beach buggy. But what I’ve yet to see is an off-road Smart camper. Well, the folks of Silverline Tools changed that:

The host of the show, Max, opens with an explanation about why he thinks the Smart Fortwo is the greatest car ever built. As an owner of five of these things, Max has certainly found a way to warm my heart. He starts off by saying that the Fortwo is the first car with interchangeable plastic panels. That’s not necessarily true, as old Saturns have plastic body panels that could be changed out. And I’m sure there are other cars from the past like this.

However, the fact that you could change your car’s color effectively on the fly was a selling point for the Fortwo. And doing a whole color swap could take just 3 hours if you know what you’re doing.

The rest of what Max says hits the mark. I have on more than one occasion parked my Smarts perpendicular in a parallel space and the ability to do that still makes me laugh. Somehow, I haven’t gotten ticketed for it, either. And like Max, I still find it amazing that Mercedes-Benz managed to pack a whole real car into such a tiny space.

Max then gets a bit silly, and brews up an idea to turn his Fortwo into an off-roader. But more than that, he wanted to maintain the convertible top while also having a roof tent. Here’s how he did it. 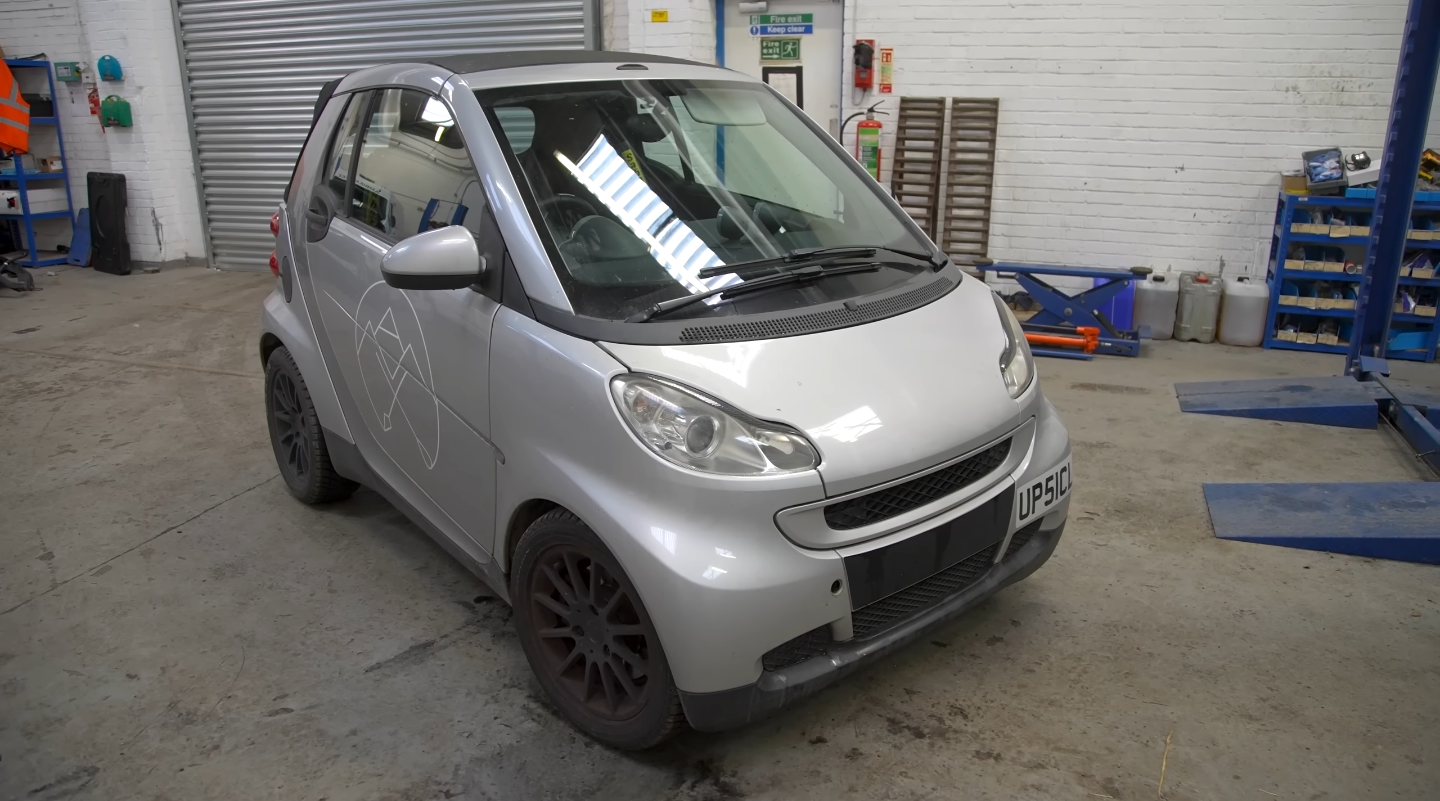 Max starts by removing the Smart’s panels, and in doing so illustrates how easy it is to change a Smart’s color. Stripping down a Smart’s exterior requires just some basic tools and some patience. Though, you could break some clips if the car is old enough.

During this process, Max recalls a time when he and another Smart owner swapped car colors just for the fun of it. Similar things used to happen in the early days of Smart in the United States!

After the teardown, Max explains the process to install the lift kit. He doesn’t indicate what lift kit he’s using, but Max explains that the lift involves 2-inch spacers on top of the struts and more 2-inch spacers at the front crossmember. This lift seems very similar in design and installation as the Daystar kit that you can get here in America.

In the rear, the kit consists of 2-inch spacers for the rear springs and attachments for the shock mounts that move the shock mounting points up two inches. Once again, installation is the same as the Daystar kit, so I wouldn’t be surprised if it was the same kit.

Max next tackles fitting off-road wheels. However, his wheel choice is a different lug pattern. As a solution, he installs thick spacers. Now, this step is actually unnecessary, as you can get stock Smart wheels that will fit off-road tires just fine. But of course, they don’t look like the wheels Max installed.

Then came fender flares secured using roofing bolts and a custom-fabricated exoskeleton. Max and his fabricator, Matt, found a clever way to mount that exoskeleton. A Fortwo comes with four bolt threads meant for recovery and for factory accessories. Max and Matt used those bolts as the mounting points for the exoskeleton. With the front and rear points in place, they slid the rest of the parts of the exoskeleton together, secured with bolts. It looks like there are additional mounting points for this setup under the car, too.

The exoskeleton was added for one specific purpose, and it’s a roof tent. While you can get roof racks for a Fortwo that might hold a roof tent, none of them will work with a convertible. This, I think, will do the trick. Other additions include a 3,000-pound winch, D-rings for recoveries, traction boards, and off-road lighting.

I have just one concern about the exoskeleton. I’ve learned the hard way about how strong those recovery bolt threads are, and they’re really only good for recovering the car itself or for static loads.

I once tried to rescue a stuck Toyota Tacoma with my recovery points, and ended up pulling one of them out almost an inch. If this car hits a tree, rolls, or tries to recover anything but itself, I’m afraid that those threads would get absolutely trashed. But replacing them isn’t too hard, as you’ll just need to replace the crash bars.

Aside from that, I adore what Max achieved here. He even finishes off the camper build with a custom trunk camping box that includes a stove and a sink. In a tour video, Max shows off even more cool ideas, from repurposing the trunk storage area meant for the roof rails for a table set. And since the roof tent forms a bit of a porch over the car, he even has an outdoor shower.

Incredibly, it seems that Max actually created a usable camper out of a Smart. It has just about everything but a toilet, and he can still use both seats! I’d love to do something similar with my 2008 Fortwo, but maybe instead of the exoskeleton, I’d get a tow hitch and a motorcycle camper.

Mercedes is a lifelong fan of all things powered by an engine. When she isn't driving one of her five Smart Fortwos or her 14 other vehicles she could be found in the cockpit of a Cessna 172 or perhaps swimming in any body of water that she could find. She also has a deep love for buses of all kinds. Please send her buses. mercedes@theautopian.com Instagram: @mistymotors Twitter: @Miss_Mercedes30 Facebook.com/neonspinnazz
Read All My Posts »
PrevPreviousThis Is How I Made Special, One-Of-A-Kind Motor Oil From Scratch
NextRenault Alpine GTA Turbo, GMC TopKick C4500 Monroe, Moto Guzzi Le Mans: Mercedes’ Marketplace MadnessNext