We’ve all dealt with coolant leaks, right? Wake up and find an expensive-looking puddle of greenish liquid under your car, or a hot, steamy shine coating your entire engine bay in maple syrup-smelling coolant? They’re no fun. All coolant leaks tend to end up on the ground, though, somehow, thanks to gravity. But have you ever wondered what a major coolant leak would look like in space? Of course you have; you’re human. Well, thanks to a spacecraft docked to the International Space Station, you don’t need to wonder any more. It’s a mess.

The spacecraft in question is the Soyuz designated MS-22, one of the two spacecraft that are always docked to the ISS, acting both as ferries to the station from Earth, and, when docked, acting as a way back home, both for scheduled returns and in case of emergencies. A Soyuz can carry up to three crew, and with the current complement of seven crew on the station (four came up and can return in the SpaceX Crew Dragon spacecraft) a working Soyuz is needed to provide safe evacuation of all crew. 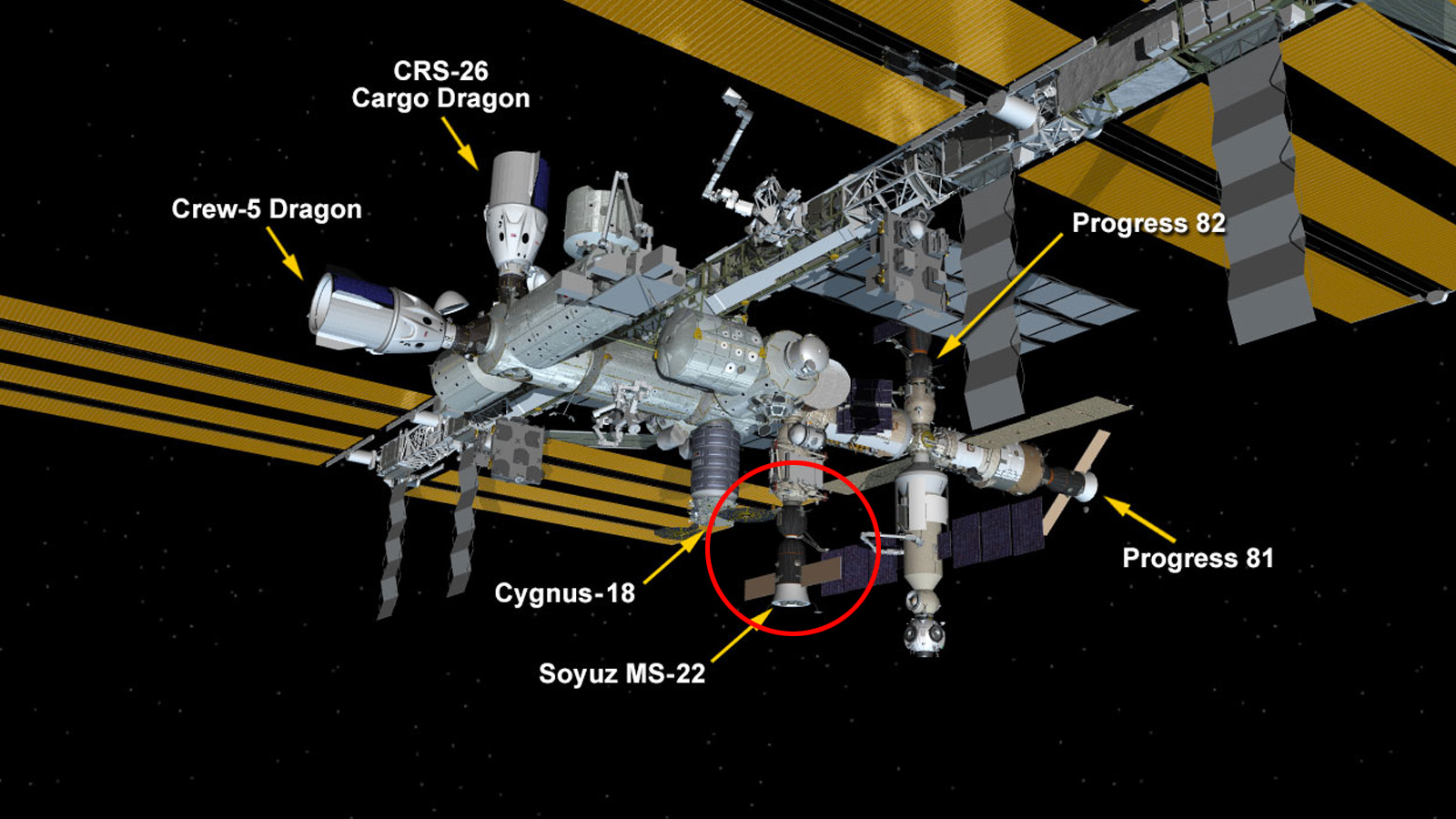 The Soyuz has been spraying out some sort of frozen flakes for hours; the particles were determined to most likely be coolant coming from one of the Soyuz’ external cooling manifolds, two of which make up part of the spacecraft’s single coolant circulation loop, which includes a radiator that wraps around the aft section of the service module. Pressure sensors in the cooling loop showed low readings, and despite the leak, currently the Soyuz’ temperature is within acceptable limits. 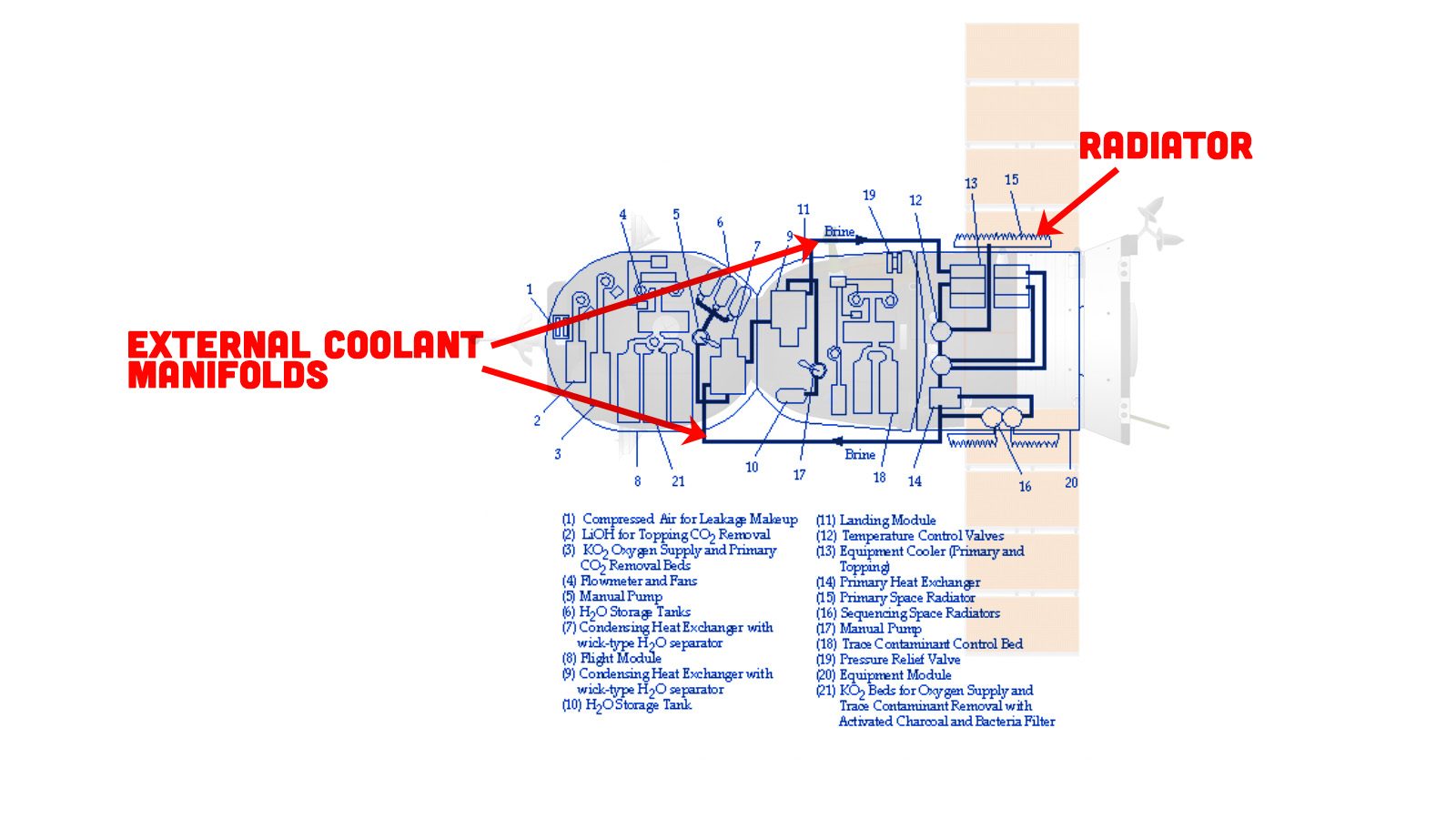 A spacewalk was scheduled but was cancelled when the leak was discovered, to prevent astronauts and cosmonauts from being potentially covered in spraying coolant. The Canadarm2 robotic arm was tasked to get closer video footage of the leak to try to determine its source.

Here’s some NASA footage of the leak in action:

That’s a hell of a leak! It’s not clear just yet what caused it, though a micrometeorite strike is a possible explanation.

The humble Soyuz has the longest and safest track record of any crewed spacecraft, so this is a very unusual situation. No one has died in a Soyuz since the Salyut 1/Soyuz 11 tragedy of 1971 when a faulty valve opened during reentry, causing the crew of three to suffocate after their successful mission to humanity’s first space station, Salyut 1.

While the ISS crew isn’t in immediate danger, if this Soyuz is found to now be unusable for re-entry, Roscosmos will need to launch an uncrewed Soyuz and dock it to the station remotely to replace the damaged Soyuz, which would be a first for the ISS.

A spacewalk is planned for December 19, and the Soyuz will be inspected remotely to determine what the plan is. We’ll update when NASA and Roscosmos figures out what they want to do, which probably won’t include some JB Weld, duct tape, and a stern warning to not leak, ya bastard.

I'm a co-founder of the Autopian, the site you're on RIGHT NOW! I'm here to talk to you about taillights until you cry and beg me to stop, which I absolutely will not. Sorry. Hug? Also, David's friend.
Read All My Posts »
PrevPreviousHere’s All The Good Stuff The Autopian’s New Commenting System Will Offer
NextThis One-Off 1993 Chrysler 300 Concept Car Built By ASC Was Probably Mind-Blowing When It Came Out; Now It’s For Sale And It’s Not That ExpensiveNext