BMW’s M division has been awfully busy for its 50th birthday. While the next M2 may be the car everyone wants, the upcoming XM SUV may be the high-margin product the M division needs. Pictures shot by an anonymous photographer and passed along by a friend to The Autopian appear to show a right-hand-drive production-spec BMW XM covered in a bare minimum of protective plastic. There’s a lot to unpack here, so let’s get into things.

The 2023 BMW XM is a new flagship SUV set to become the first M-only model since the BMW M1 supercar. If this seems distasteful to you, you’re not the only one who feels that way. While M originally stood for Motorsport, it sure seems to stand for Marketing these days. Hey, what better for marketing than a 650-horsepower plug-in hybrid super SUV? BMW has already confirmed in a press release that production will start this December in Spartanburg, S.C., so expect a full official reveal in the coming months. With that out of the way, let’s talk about the styling we see here. 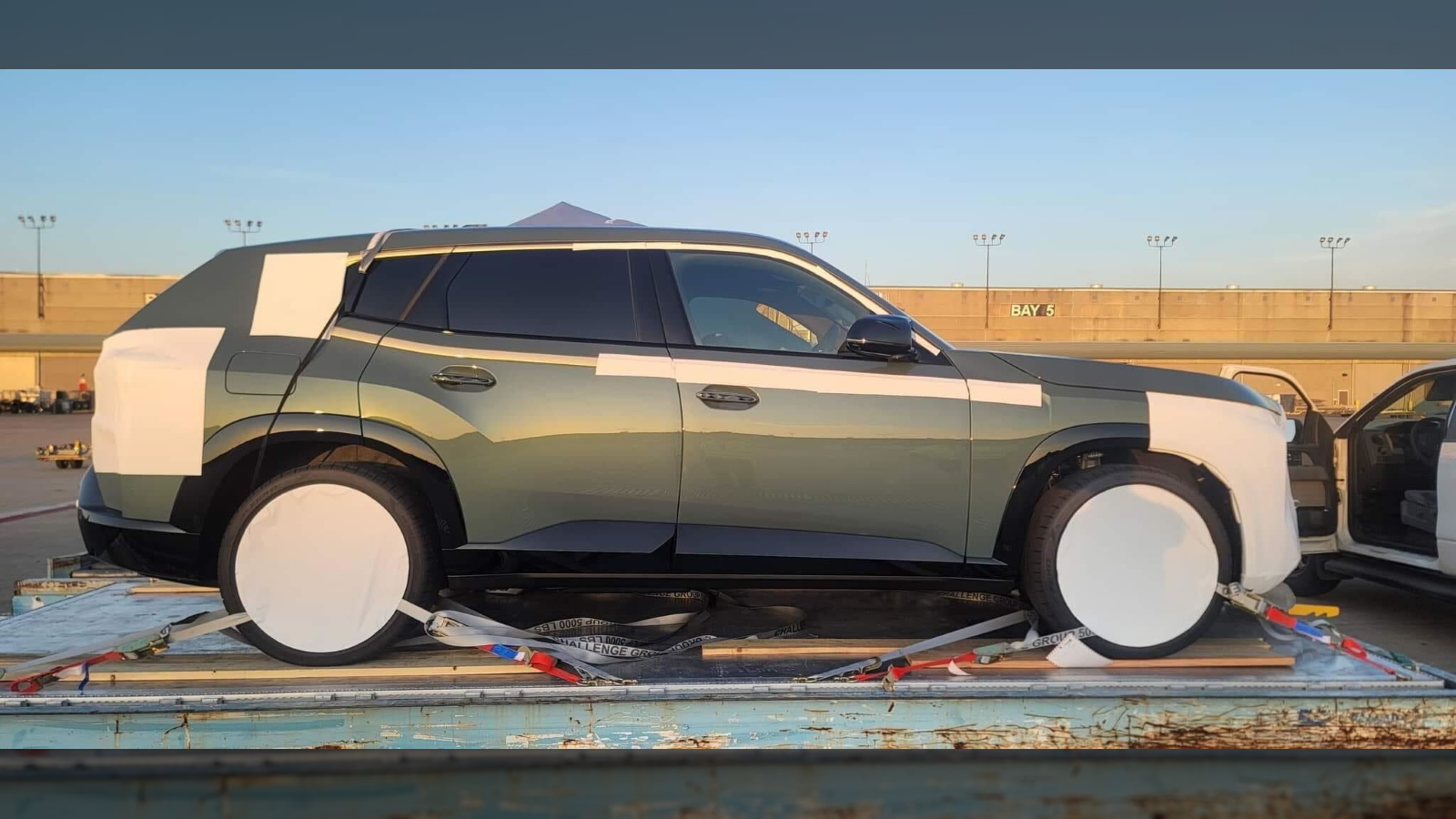 Looking at the side profile, this thing is absolutely huge. More importantly, every styling element on this SUV is enormous. Massive shiny black plastic cladding? Check. Available 23-inch wheels? Check. A front end blunter than a Kenworth? Check. This thing is an absolute monolith. It’s also very low-poly. What do I mean by this? You know how character modeling looks in GoldenEye for the N64? That’s low-poly. Blocky, angular, simplistic. The wheel arches on this BMW are slightly squared-off, the fender lines are squared off, the windscreen meets the roof and hood at sharp angles. Yet despite this very simple design language and Volkswagen Atlas Cross Sport-like silhouette, there are still many interesting details plastered onto this SUV.

Just for a second, imagine that there’s only paint under the protective film on the right front door. You’re picturing an enormous amount of metal between the plastic rocker panel/lower door cladding and the greenhouse, right? To break this up, BMW’s plunged the window trim down the body side, terminating it on the front fender. It certainly looks weird and it’s arguably a lazy way of breaking up the bodyside, but this trim element certainly does its job of tricking the eye. More importantly, it’s an opportunity to bring in some interesting color. A partially-covered photo seems to show that this body trim isn’t just a typical chrome piece, appearing gold-hued even without direct golden hour lighting. Interesting. Equally interesting are the low-poly inserts on the door handles, a weird sort of diamond pattern that echoes the interior trim on the new 7-Series.

Moving on to the back, this SUV seems fairly faithful to the XM concept, which by the way, looks like this: 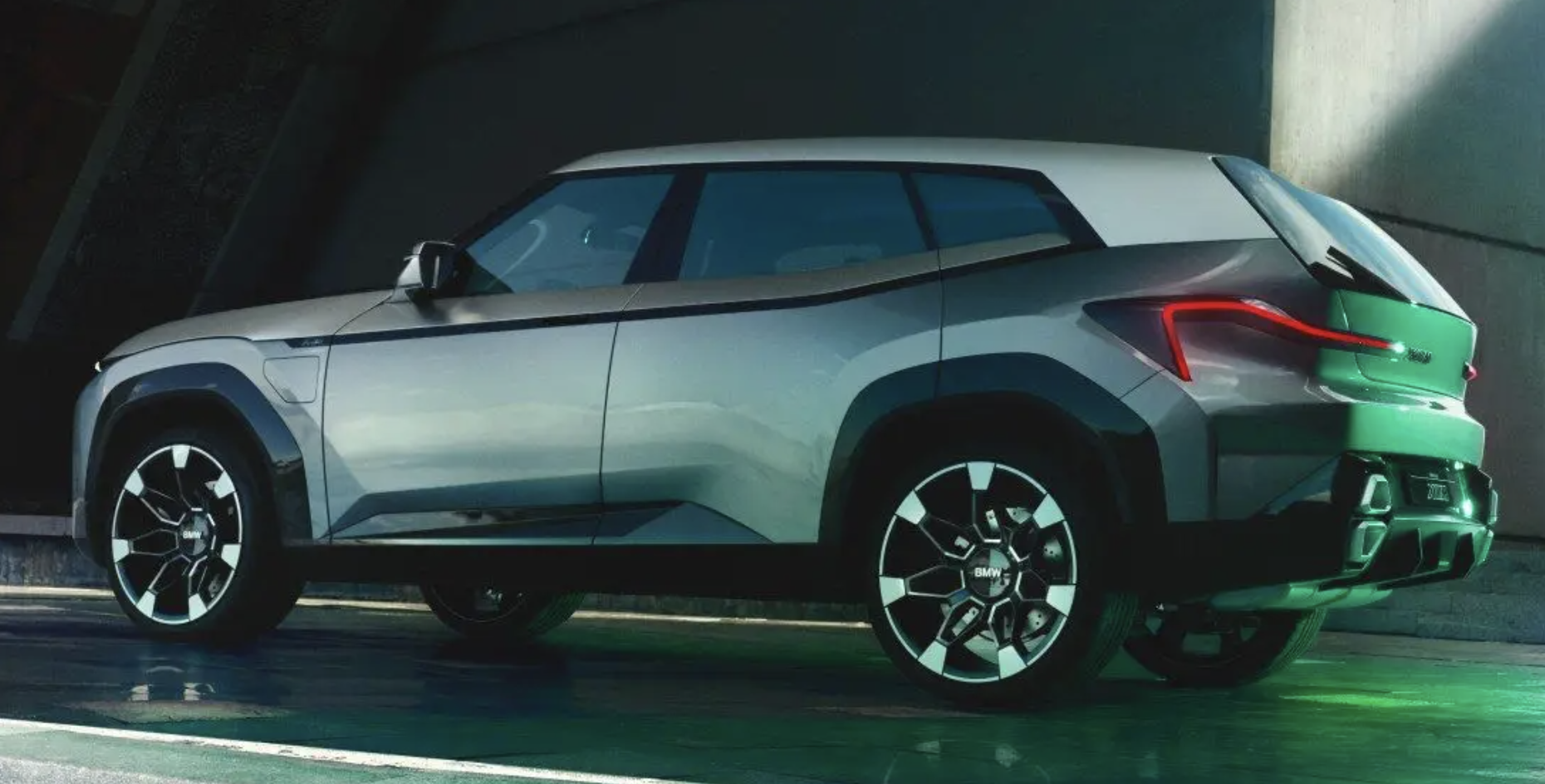 While the tail lights are still masked up, it’s fairly easy to see their silhouettes sweeping far along the hatch. The XM concept’s etched emblems in the rear glass make an appearance, as do the unusual stacked quad exhaust tips. However, none of these elements will be as controversial as the massive design crime on the rear bumper. Look at how far that shiny black plastic extends upward! Who on earth thought that would look good? It’s lazy, it makes a farce of the diffuser-style element and it’s generally uninspired. Throw the horizontal character line sweeping through both rear reflectors and it’s safe to say that this is one incredibly busy rear end. Oh dear. 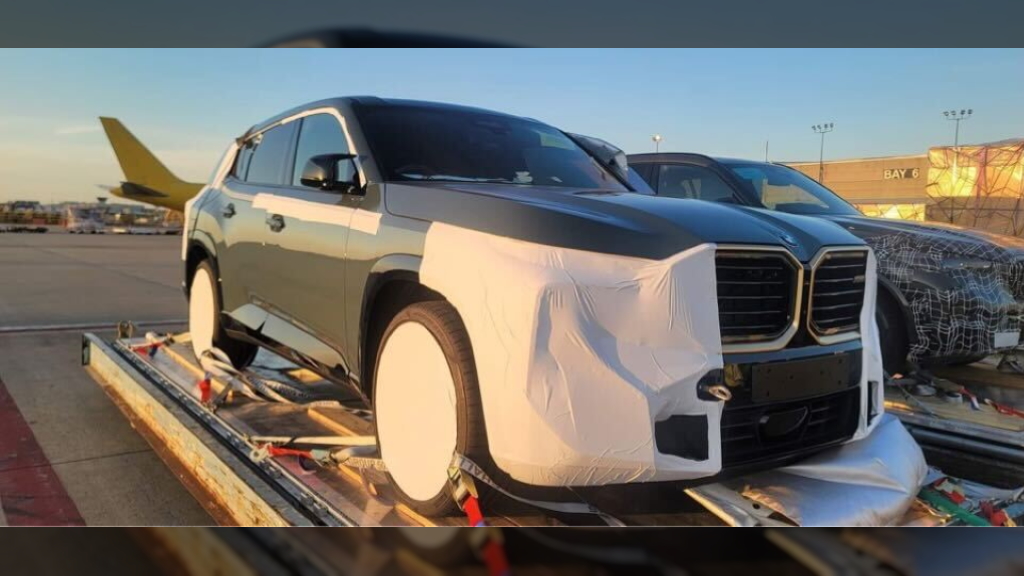 Compared to the rear of the BMW XM, the front might not be so bad. Despite the protective plastic on the corners of the vehicle, it’s really easy to see the split headlamp treatment and substantial air curtains, both of which flow well with the lines of the vehicle. Sure, the kidney grilles are roughly the size of two Changlis, but they appear wider than they are tall and stop well above the license plate mount. Throw in the fairly conventional lower grille and it really seems like BMW’s getting the hang of the big kidneys. The most polarizing part of the front end will likely be the double-bubble hood. While I get what BMW’s going with given the XM’s V8 engine, the bubble proportions are definitely outlandish. 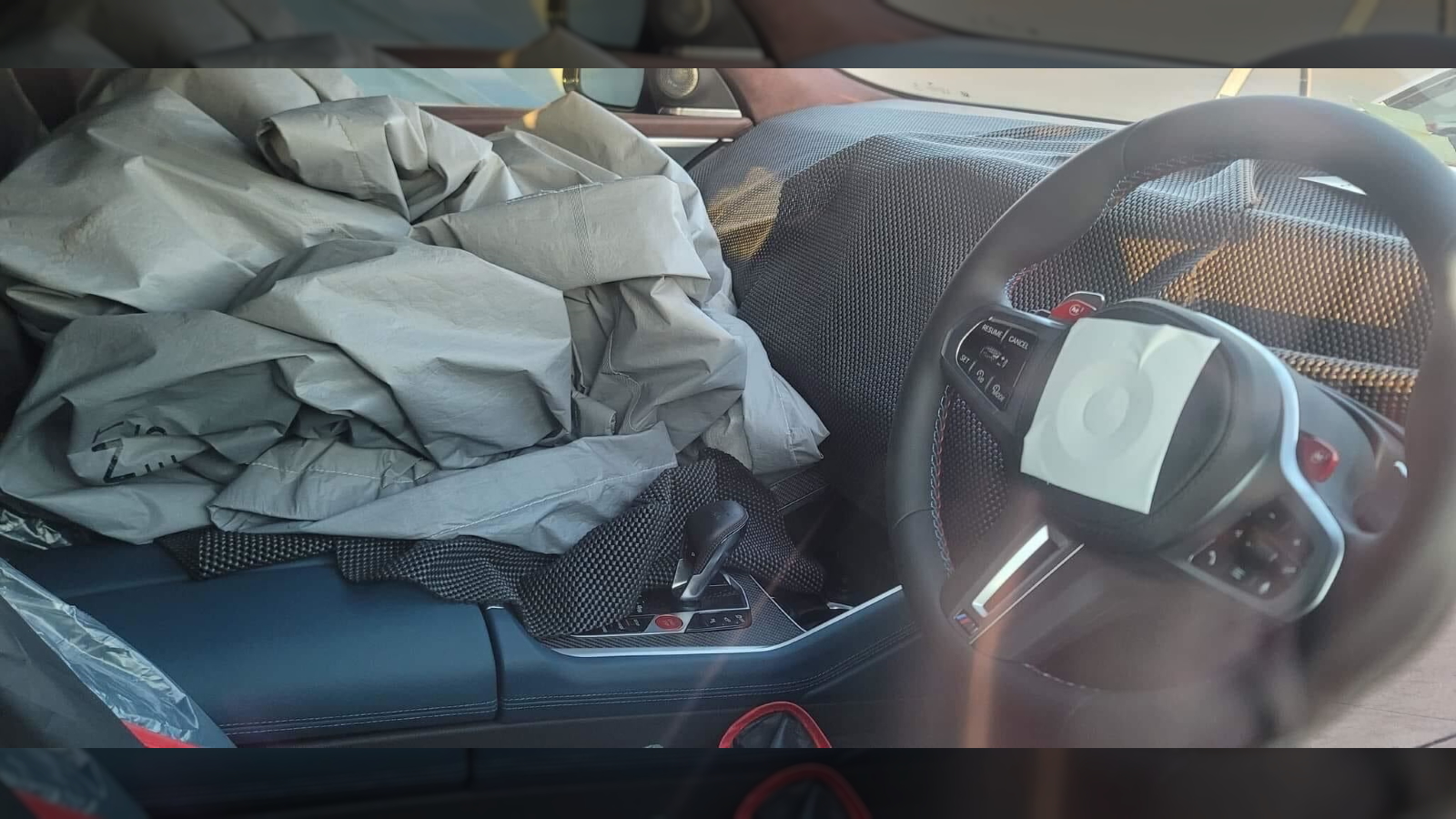 Right, that’s the outside covered, but what about the inside? Well, the dashboard on this vehicle is covered up but there are some interesting hints on offer. Let’s start with what we can see. The good news is that the steering wheel and shifter are proper parts-bin items. Not only does the wheel look identical to the one on other M cars, it’s a great steering wheel so I’m glad BMW didn’t try to reinvent it. There’s no capacitive-touch nonsense, everything is logically laid-out and the M mode Shrek ears are a nifty touch. As for the shifter, I’m glad it’s not a push-button affair like on the iX and new 7-Series because push-button shifters don’t really solve much. They’re not space-efficient, they’re not always intuitive and they’re reasonably complex from a component standpoint. Replacing one joystick assembly with integrated switches for shifter release and park with four or five individual buttons and switches doesn’t sound brilliant from an assembly standpoint.

The other clues on offer really just pertain to color options and equipment. This unit has blue leather on the console which is freaking awesome to see. I know, I know. Black interiors hide stains and sell well, but who doesn’t love a pop of color? If you’re spending six figures on a car, why would you order a boring one? White contrast stitching on the console is a nice touch, although a fairly expected one. Also expected is the metal-trimmed tweeter poking out of the left front door, typically part of BMW’s optional Bowers & Wilkins audio systems. Let’s hope the system in the XM features nice clarity and B&W’s signature warm sound. 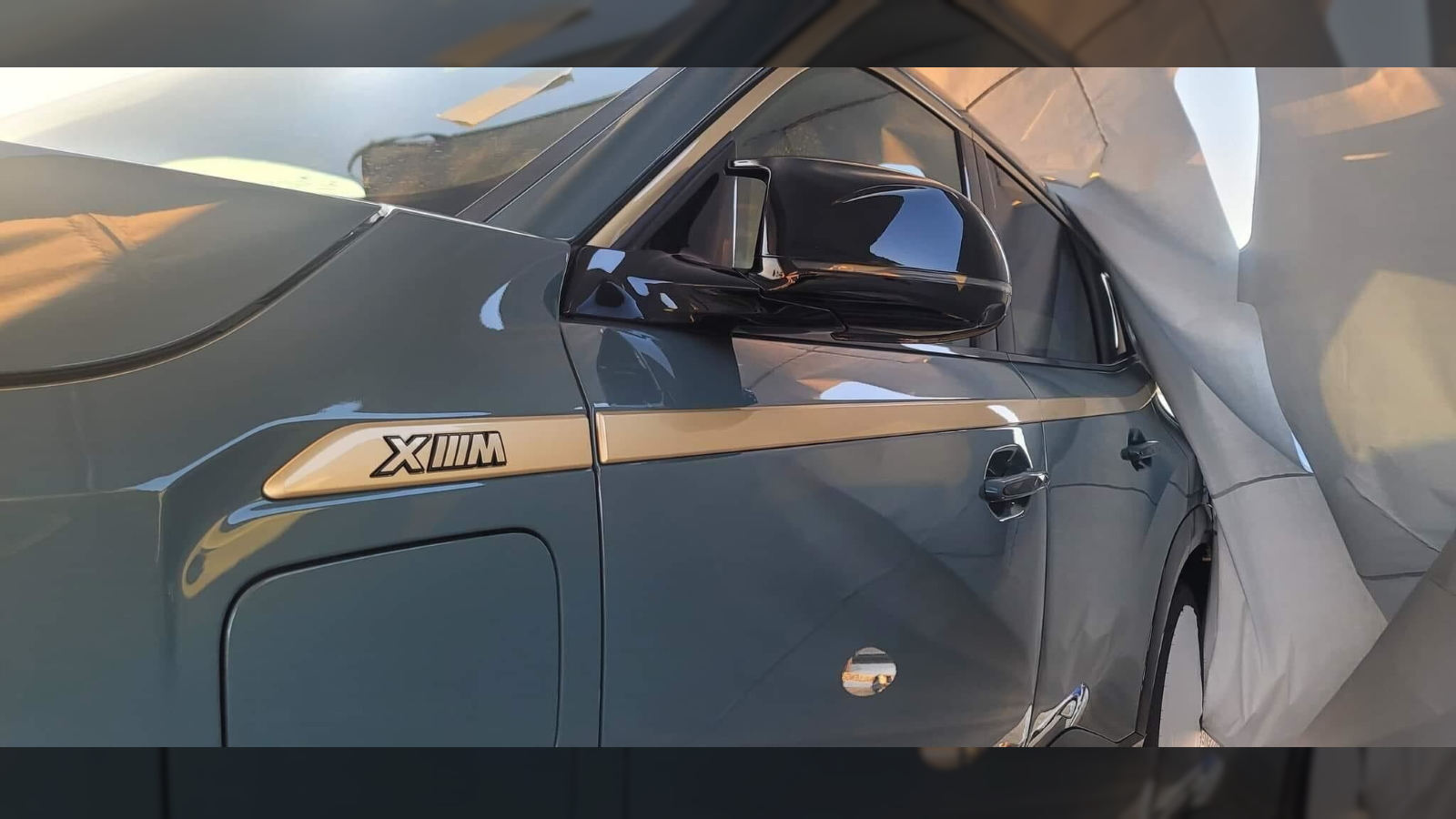 Well there we have it, an SUV that could very well be the BMW XM. Honestly, it’s both uglier and less ugly than I expected. I definitely can’t say I’m a fan, but there’s a lot of dreadful car design on the market these days. It’ll take feats of magic to make the XM drive like a proper performance vehicle, but I’m sure it’ll be great at parking up outside of Nobu. Hey, if ultra-lux SUVs help finance projects like the upcoming M2, I’m all for it. After all, if the margins on the Cayenne helped save Porsche, maybe the margins on the XM will help save the M cars we all know and love?

Hat-tip to Scott for passing along the photos and getting us permission to publish them.

Thomas is a Nu Rave-blaring, heel-toe downshifting, maple syrup-swilling, chassis-geeking, junkyard parts-hauling, floppy-haired scenester who's been writing about cars since college. His current ride is a 2006 BMW 325i with the six-speed manual gearbox. Instagram: @thomas.hundal Twitter: @thomashundal
Read All My Posts »
PrevPreviousBehold, The Ultimate Fuel Gauge Has Been Found
NextThis Video Of A Jeep Gladiator Driving Down A Highway Without Left Tires Is BafflingNext