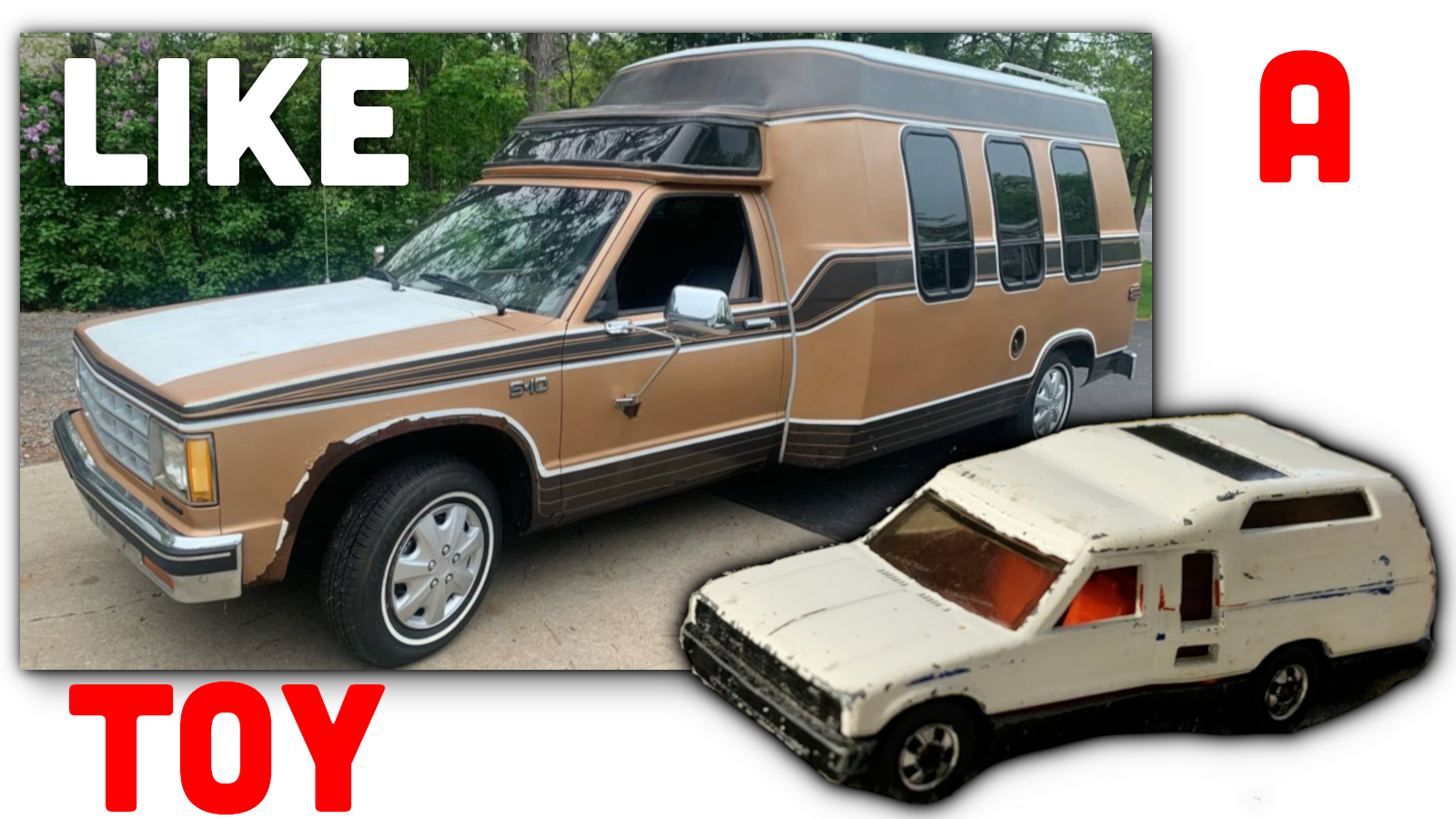 If you’ve been reading auto news sites at all in the past week or so, chances are that you’ve seen this Chevrolet S-10 conversion van for sale near Wausau, Wisconsin. I did, too, and I embarked on a search to figure out who made this van and why. After over a  digging through archives and undertaking countless searches I still have a lot of questions, but I did make one surprising discovery.

A couple of weeks ago, this 1984 Chevrolet S-10 conversion van popped up for sale near me. I scooped it up thinking that I’d feature it in a Mercedes’ Marketplace Madness, but finding information on this creation has been a challenge, to say the least. The fact that it exists at all isn’t too surprising. As some of our readers could probably attest, there was a conversion van craze in the 1970s and 1980s. People loved hauling themselves and their families around in vans filled to the brim with shag carpeting, huge recliners, and dim interior lights. And who can forget the murals!

Someone, or more specifically a company, thought that what the Chevrolet S-10 pickup was missing was a fiberglass conversion van body complete with a gullwing door. Oh yeah, I forgot to mention that, check it out!

As the General Motors Heritage Center notes, pickup trucks were becoming larger and GM saw a market for a smaller, less expensive pickup. At the time, small trucks were popular. Ford jumped into the market with Mazda with the Courier. Plymouth had the Mitsubishi Forte-based Arrow pickup. Dodge was selling the Mitsubishi Triton as the D-50. And GM itself had the Isuzu KB as the Chevy LUV. The Chevrolet S-10 released in 1981 and GM says it became a hot seller practically overnight. And soon, it replaced the LUV as GM’s small truck.

The S-10 and its GMC Sonoma badge mate would go on to become more than just a work truck. The GMC would get ironed out into the famous Syclone and the S-10 would even get an SS version. But none of the official versions came with a van body. That’s where New World Editions, Inc. comes in.

In all of my searching I couldn’t find much about this company. I found one Florida company matching the name that went out of business in 1994. There’s another matching the name in Mishawaka, Indiana that also appears to be long gone. Through some digging, I found that the Mishawaka New World Editions was featured in Woodall’s 1986 Western Campground Directory as selling Class B RVs.

But the van featured in that periodical was larger. If the Indiana company is the correct one, it would make sense that it would offer a smaller van, but on the bones of a pickup truck. This S-10 conversion van was created only a year after the launch of the first-generation Chrysler minivans. And building a van from a pickup truck offers the freedom of creating any body that you want.

In this case, the van body is said to be fiberglass and it hangs behind the cab like a growth.

The cab got a nice treatment, too, as it got taller with a neat wraparound upper window. New World Editions clearly put a lot of work into this van-truck (vuck?) and you’ll probably even notice that the rear axle features dually wheels.

Power comes from a 2.8-liter V6 2BBL making 110 horses and 145 lb-ft torque. When I was researching this van, something hit me. I have a Hot Wheels car that looks like this thing! Sure enough, buried in my two decade-old diecast stash and filed into my box of RVs is this Hot Wheels Minitrek camper.

Fans of this diecast model call it a Toyota Hilux-based Chinook camper, but I’ve yet to find a Chinook that looks exactly like it. I think that this van comes even closer than a Chinook! And it gives the vibes of a real life toy car. It has the goofy proportions of a Hot Wheels car and a hatch like you’d find on a toy. I love that.

The seller claims that the truck is one of five ever built. Since there’s no readily available history on this company at all, I asked how they came to that conclusion. As it turns out, this is essentially a game of Telephone where the seller learned from the previous owner, and the previous owner didn’t have any proof. That said, this is likely rare since this is the only one that I could find anywhere at any time.

I found just one old listing, and it was for the last time that this van was sold, which was in 2020.

That sold listing does give us more details than the current listing. Underbody shots show rust all over the van’s frame, and indicated that it had a rotted out brake line. The bad news continued in the form of a downshift clunk, a bad strut for the apparently heavy gullwing door, bald tires, rodent damage, and torn seats. It also said that every bit of metal was rusty.

The new owner wasn’t able to give me any history about the van or the company that built it, but tells me that a lot of work was done to the van. It now has six new tires, new rockers, new brake lines, new window seals, a strut for the door, fixed lighting, and the broken air-conditioner was repaired. The seller admits that they haven’t fixed everything as the fenders remain rusty. The price for it two years ago was $4,800. With the fixes, the current owner wants a little more than double at $10,800.

It’s hard to say if that’s a good price, even if it’s rare and looks like a toy. What I want to know is if any of you out there know anything about New World Editions. Someone out there thought that this van was a great idea, and I want to know about it! But annoyingly, I’ve come to a dead end in my own research. So if you have any details on this thing or just want a virtual hug, drop me an email at mercedes@theautopian.com.

Mercedes is a lifelong fan of all things powered by an engine. When she isn't driving one of her five Smart Fortwos or her 14 other vehicles she could be found in the cockpit of a Cessna 172 or perhaps swimming in any body of water that she could find. She also has a deep love for buses of all kinds. Please send her buses. mercedes@theautopian.com Instagram: @mistymotors Twitter: @Miss_Mercedes30 Facebook.com/neonspinnazz
Read All My Posts »
PrevPreviousWhy South Korea Sees New EV Tax Credit Rules As ‘Betrayal’
NextThe 2023 Alpina XB7 Will Let Your Whole Family Experience Luxury At 180 MPHNext