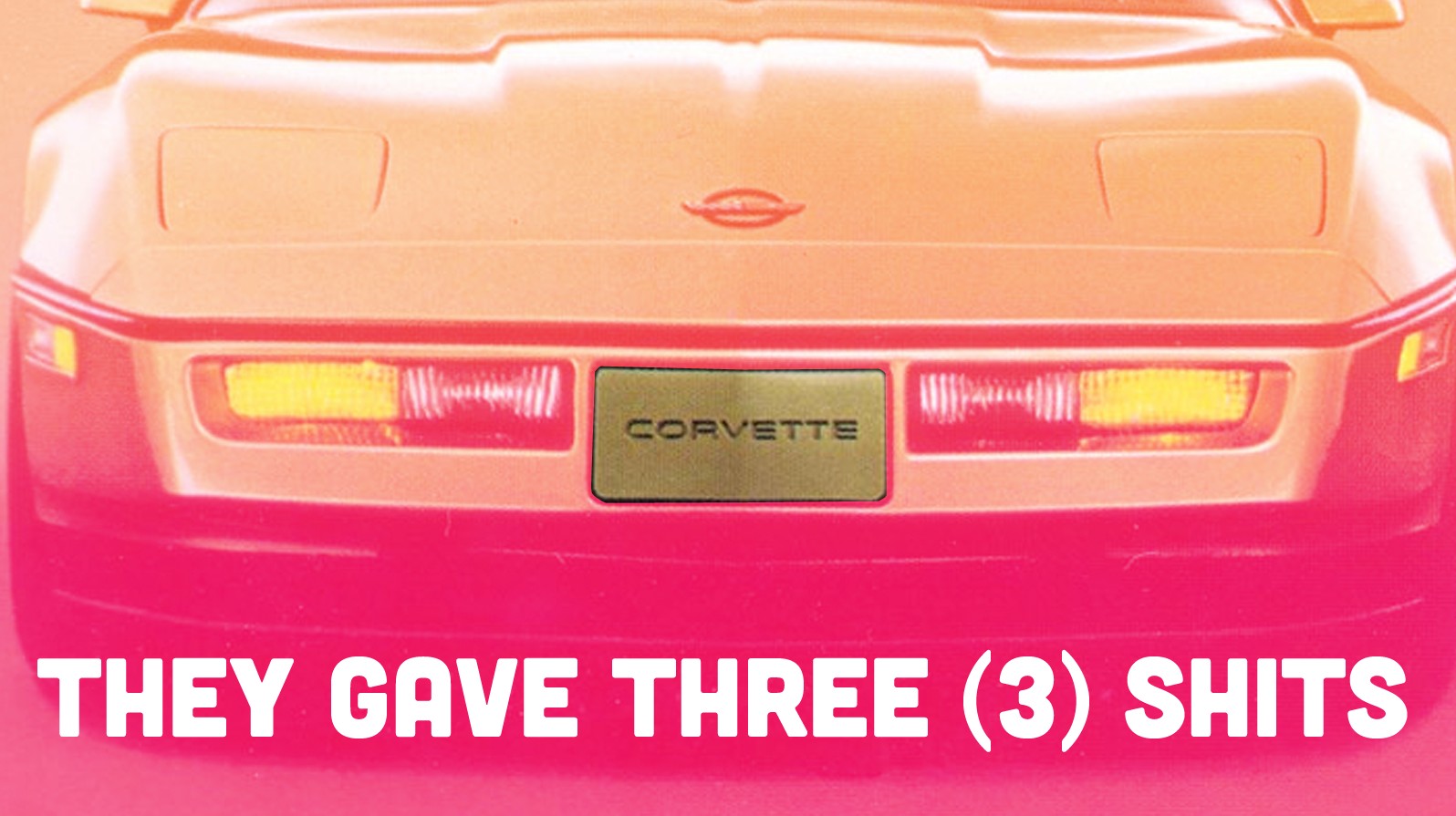 There’s something about license plates that feels like the most reluctant consideration of automotive design. Other necessary requirements of car design seem to be treated with much more enthusiasm: Lights are an opportunity for expression, grilles and heat-extraction vents offer so many ways to convey concepts and emotions visually, side mirrors and bumpers and door handles often feel like real excitement and creativity was poured into them. But not license plates. Far too often, they way plates are designed on a car feels like a chore, something your parents are making you do that you really, really don’t want to. Especially front plates. Every now and then, a carmaker decides to give a shit about license plates, and I want to note the rare times this happens. This time, let’s focus on GM, who gave some manner of shit about license plates at least three times.

Yes, three times. Three separate times some designer at GM considered the problem of license plates and didn’t roll their eyes and do the absolute minimum they had to do. Oh, and in this little roundup (which, I’ll admit, focuses mostly on American license plate standards) I’m not including flip-down license plates that hide the fuel filler, because regulations have made those effectively impossible for quite some time now, (I think the 1996 Chevy Impala was the last car to do it?) cool as they are.

One thing I’ve never fully understood is how many American-market cars seem so unprepared for the installation of a front license plate, which is ridiculous, considering that over half (31 out of 50) states require plates at the front. This isn’t some weird regulation only some backwater counties in the states of Idaho or Franklin have–it’s the majority of America, and, hell, there’s even a whole lobbying group for front license plates.

Seriously, there is.  I had no idea, but there are people who give so much of a shit about front license plates that they make maps like this: 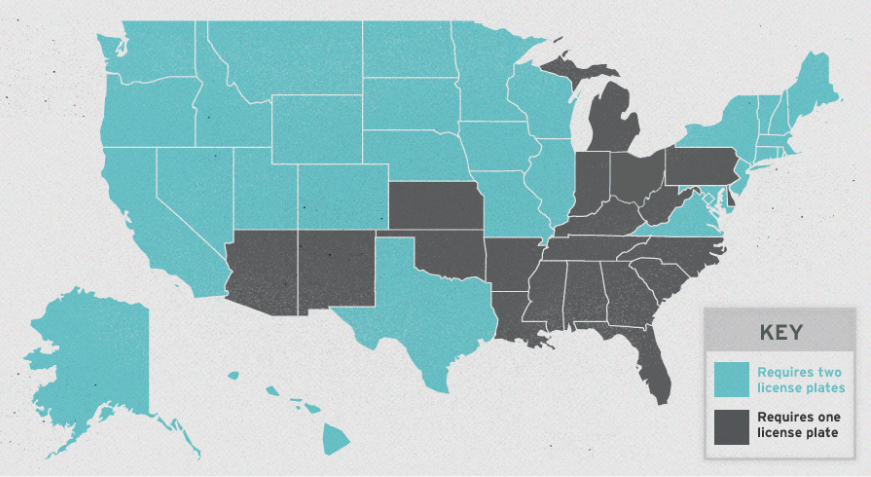 So, despite front license plates being commonplace, there are still many, many cars that seem to have given zero consideration into how to mount these things, and as a result many people who give a shit about the look of their cars resist mounting front plates as long as they can. If you search YouTube for “front plate” you see a litany of videos of people lamenting about being “forced” to add a front plate or showing off tactics to mount them discreetly or temporarily or to avoid drilling holes in their cars.

Yes, drilling holes for license plate mounting is common, and is a dramatic reminder of how little many car designers care about the problem of where to mount a front plate. Even cars that do provide some sort of official bracket, like the current C8 Corvette, still find themselves with issues that no product anyone ever buys should create, as seen here in this Corvetteforum post: 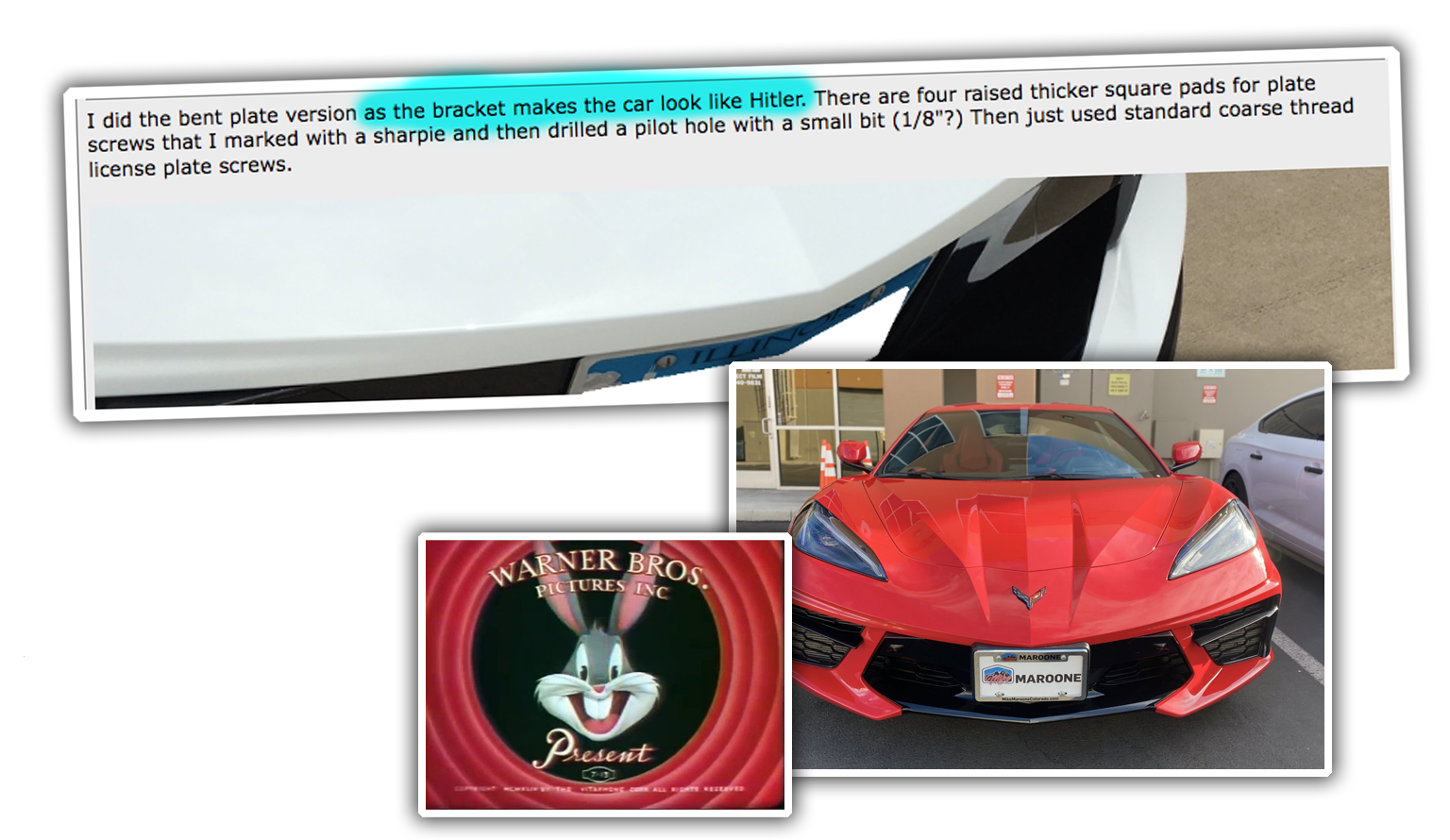 Yes, the guy is complaining because something he has to do to keep his car legal also makes his car look like Adolf Hitler. If you bought an air fryer and some kind of UL code required you to modify it, but that modification made it look like a little Nazi war criminal sitting on your kitchen counter, nobody would stand for it. But it happens in cars, especially for states with dark license plates.

I think a more charitable association of the C8 ‘Vette with a light-colored plate is Bugs Bunny, but honestly that’s not a huge step up from Hitler when it comes to the image most C8 Corvette owners wish to convey.

The Corvette is hardly the only car to suffer from a front plate transforming the whole car’s look into a bunny; I’ve talked about these license plate issues before on that other site and mentioned the Miata as another recent example because, look: 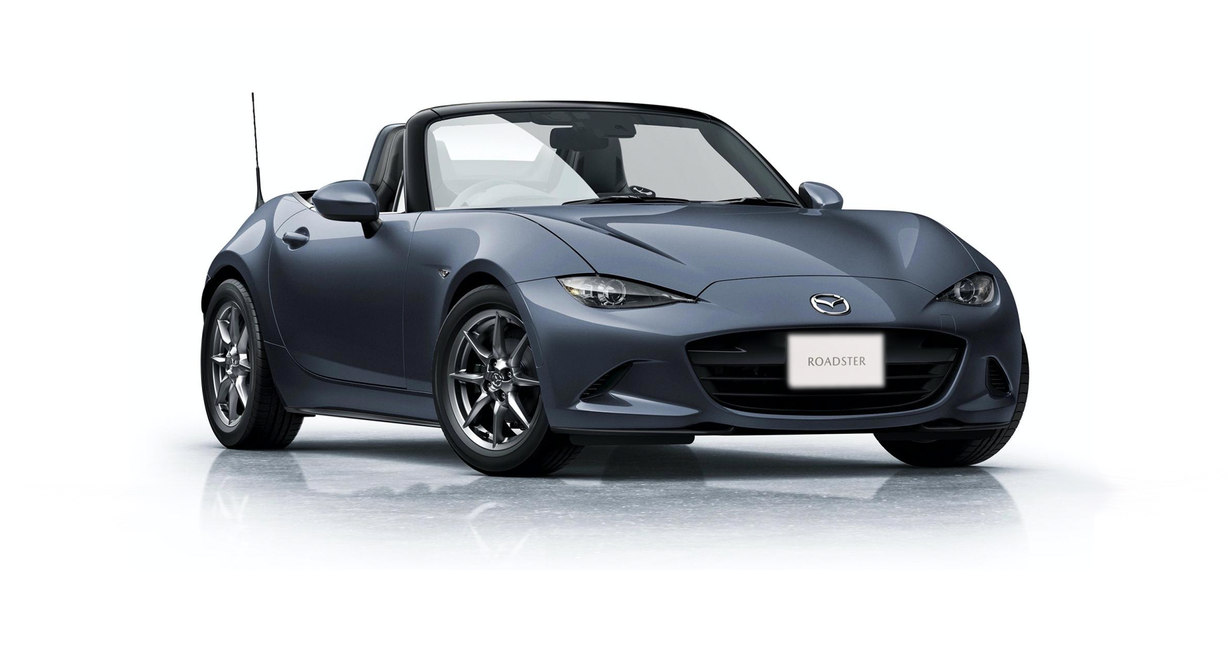 Come on. That’s a bunny. 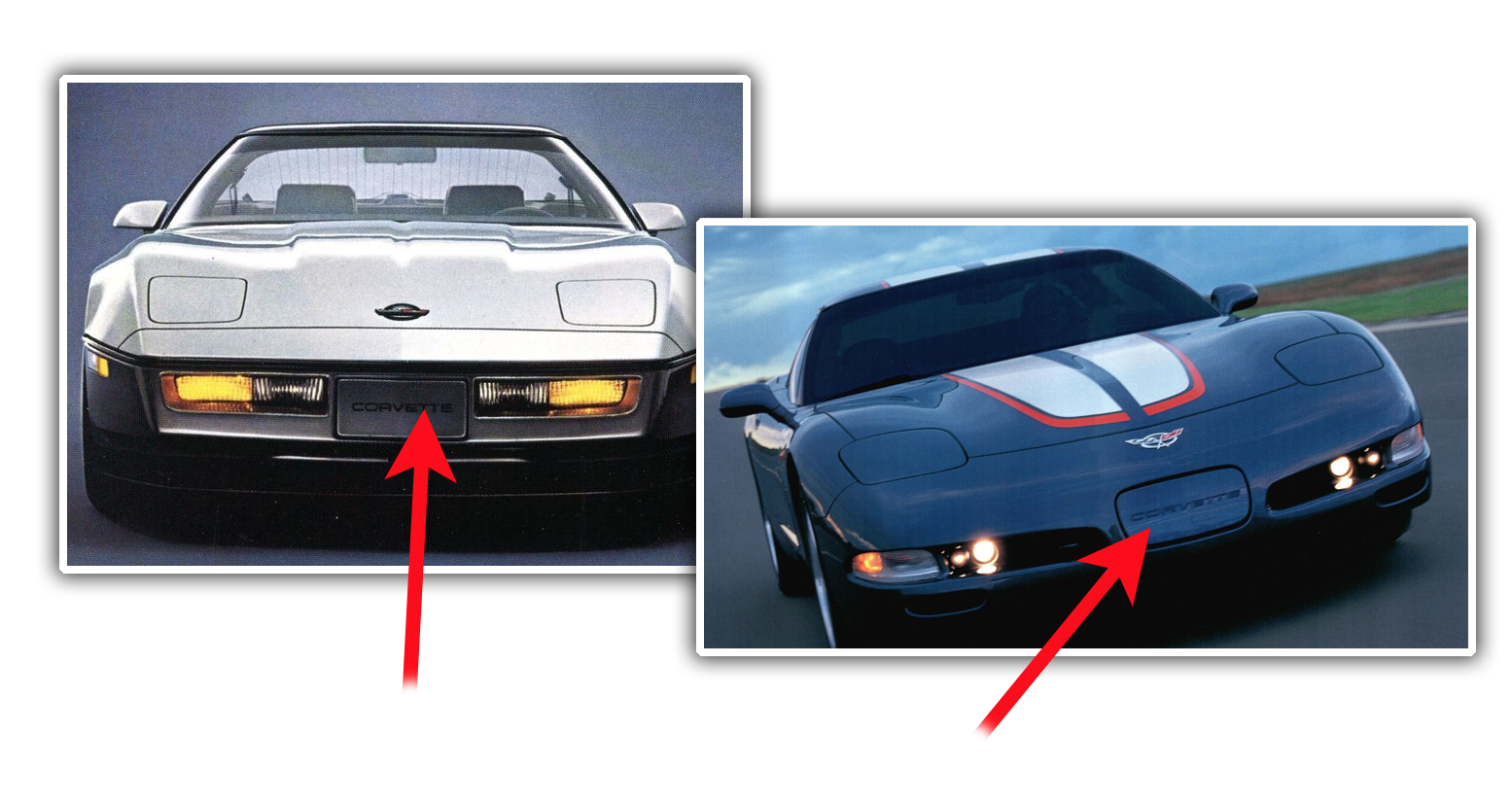 This is how you handle a license plate like a goddamn adult. You accept the reality of it, and then you do the best you can to make it work. In these Corvettes, the solution was to make the version that required a front plate the default, and instead of desperately trying to find where to stick the damn plate after the car is designed, you integrate that need into the design from the get-go.

The result? A little inset area just for the license plate, and, for the minority of states that do not require a front plate, a clean, simple, decorative panel with CORVETTE badging is set into the recess, with no shame or attempt to foolishly hide something that has no need to be hidden.

Also, note the very slight crease in that C4 Corvette’s filler panel’s center? It’s easy to replicate that on a real plate with a very slight folding of the license plate, so when it’s mounted it keeps a bit of that crease. It’s a nice, subtle touch.

If you needed the plate, it was integrated cleanly and deliberately, and if you didn’t, well, then the car still looked good and provided you with another place to remind people you own a Corvette. Everybody wins.

For a number of Buicks in the mid-1980s and 1990s, including the Park Avenue and the Riviera, you didn’t have to screw your rear license plate into crude holes punched into sheet metal, like some filthy animal, but rather all you needed to do was gently slide the license plate into a slot inside the trunk, where the plate would elegantly glide down into its specially-designed nookh, where it would remain, safe and secure. 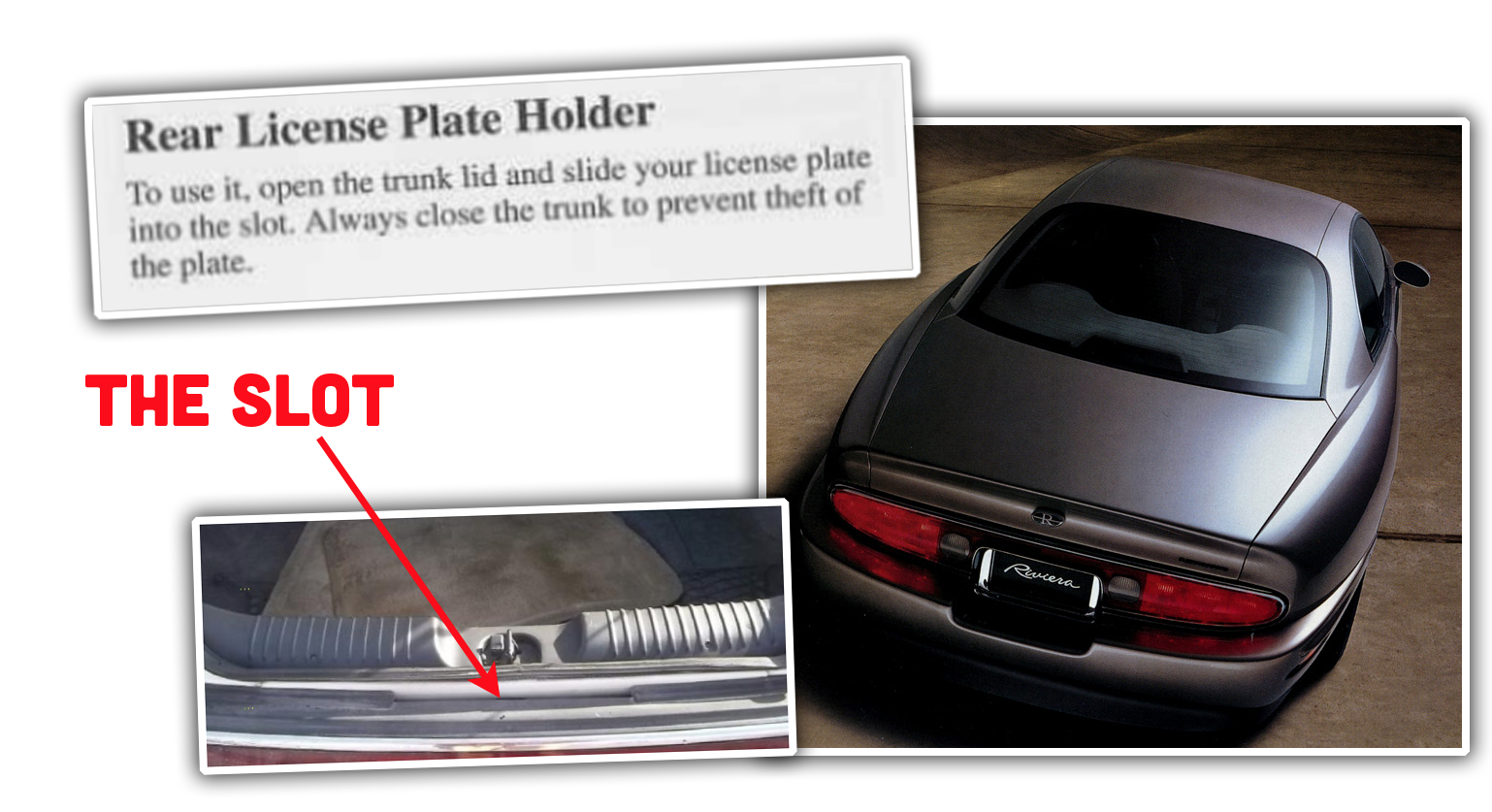 Keeping access to the slot in the locked trunk provided more safety from theft than a normally-mounted license plate, which can be removed with a simple screwdriver. This solution was easy to use, attractive because the plate could be more tightly integrated with the body work , more secure, and, if you yourself wanted to change plates more often to undertake whatever devious plans you had, that would be far quicker to do.

This is so cool, let’s get a better picture of that slot, and how it looks in place:

Damn, that’s an elegant solution! And when the license plate is in place, it’s recessed into its little chrome-rimmed nook and looks so clean and well-integrated. I love it.

Why is this approach completely extinct today?

Look, there’s a Rolls-Freaking-Royce Cullinan, a big ultra-luxury SUV that starts at $330,000, and it still uses garbage screws, just like my Yugo does. What a pile of crap. Have these people never seen a Riviera?

Also, nice backup camera integration, Rolls-Royce. Did you get the person who did the backup camera treatment for the Mitsubishi Mirage? Another triumph, fellas.

Good License Plate Thing 3: Let The Light Do Some Advertising 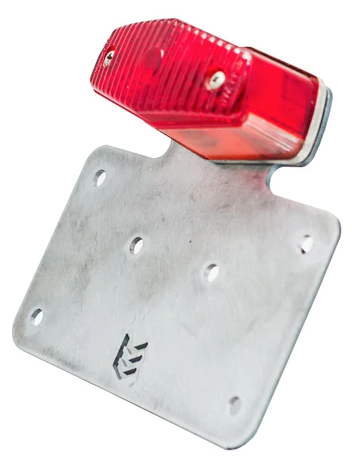 License plates add another level of complexity in that by law the rear one is required to be illuminated, so provisions for this lighting must be made. Most cars deal with this problem the same way they deal with all license plate requirements: begrudgingly and with minimum effort.

Sometimes this leads to clever solutions, like the many taillight designs over the years that have incorporated a window under the taillight bulb to “borrow” light to act as a license plate lamp (see one example to the right there), since the two both need to be illuminated concurrently anyway.

Normally, it’s the taillight bulb that is doing the altruistic work of illuminating the license plate as well. However, I can think of one – And I think it is just this one – situation where a license plate light bulb is called upon to perform an additional task. Here it is: 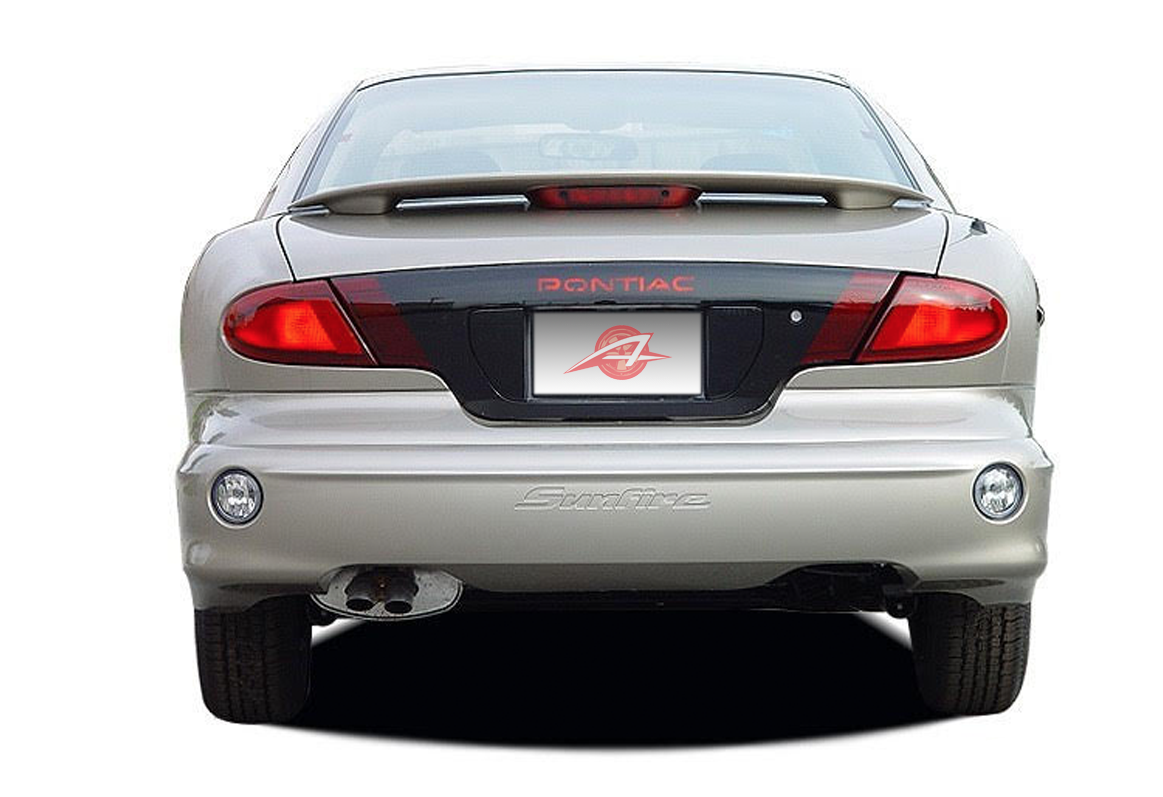 Yes, the Pontiac Sunfire! The Sunfire was a pretty unremarkable little car built between 1994 and 2005 on GM’s ubiquitous-yet-forgettable J platform, but the one thing these cars did was make their twin license plate light bulbs do double duty by illuminating that PONTIAC logo on the rear sort-of-heckblende plastic panel between the taillights.

It’s clever and fun! Plus, you could easily see if one of your license plate lights was out if you all of a sudden found yourself driving a TIAC or a PON.

I feel like a lot of us do a fair amount of shitting upon GM for a lot of things, but I have to give them credit where it’s due. Few other automakers have taken license plates as seriously as GM has, at least a few times.

(and thanks to The Autopian’s Bishop of Automotive Ephemera for research!)

I'm a co-founder of the Autopian, the site you're on RIGHT NOW! I'm here to talk to you about taillights until you cry and beg me to stop, which I absolutely will not. Sorry. Hug? Also, David's friend.
Read All My Posts »
PrevPreviousSaab Turbo, Chrysler Wagon, Or Ford Work-Truck: Which In This Triumvirate Is Your Shitbox Of The Week?
NextTo The Arrogant Rich Guy Who Tried Pressuring Me Into Selling My Car: Get BentNext