Other than having similarly colored and textured fur, I’m willing to be that most of you don’t associate noted Peruvian bear Paddington and famed auto journalist Jeremy Clarkson. I know I sure as hell didn’t. Paddington is a bear well-dressed for inclement weather and the best-known fictional animal named for a London railway/Underground station (significantly more popular than the runner up, Whitechapel Weasel), and Jeremy Clarkson is one of the most famous auto journalists ever, best known for his work on Top Gear, being funny but curmudgeonly, and decking a BBC producer when he didn’t get a steak. So different, and yet these two have an unexpectedly entwined history. I’ll explain.

Now, I can’t take credit for discovering this connection; The Mirror ran a story about this, and, even better, the explanation seems to have been in plain sight on the official Paddington website for who knows how long. It’s hardly been hidden, but I find it kind of surprising how little known it seems to be, especially in auto journalism-focused communities like the ones that surround me like the candy shell of a Skittle surrounds whatever the hell is inside a Skittle.

Essentially, the story goes like this: During Christmas (if you’re unfamiliar, this is a gift-giving holiday associated with the Christian religion, similar to Michaelmas, but with an indoor tree) of 1972, a woman named Shirley Clarkson wanted to make a special toy for her two children, Joanna and Jeremy, of a literary character I assume they were fond of, the aforementioned Paddington Bear. She made one, for two kids, it seems? Okay.

This plush rendering of Paddington turned out to be the first physical, cuddleable manifestation of the famous bear, and as such Shirley’s toy got a lot of attention, prompting her to make more, eventually selling them under the company name Gabrielle Designs, in local shops.

Not surprisingly, eventually Paddington author Michael Bond found out that his character was the subject of bootleg toys, and wasn’t thrilled. According to the story in The Mirror, when Jeremy Clarkson’s parents went to London to speak with Bond’s lawyers about the whole thing, they rode in an elevator (I guess they called it a “lift”) with Bond, and, um, bonded, the result being that Bond granted the Clarksons a license to produce stuffed Paddingtons.

This seemed to work out well for everyone, as the Clarksons made good money from the venture (eventually selling the license to British toy company Hamleys) and the revenue helped send Clarkson to good schools, which is where he presumably learned something about writing in English, which he then put to the only reasonable use of English, writing or talking about cars, as much as possible.

The only other example I can think of that has to do with something automotive relating to a non-car-related toy may require a bit of a lateral move to the dog world: The Kong.

I’ve written about this before, but, in case you were unaware, the well-known (especially among our canine readers) chew toy called a Kong was designed based on a rubber suspension bump stop used in Volkswagen Type 2 buses. 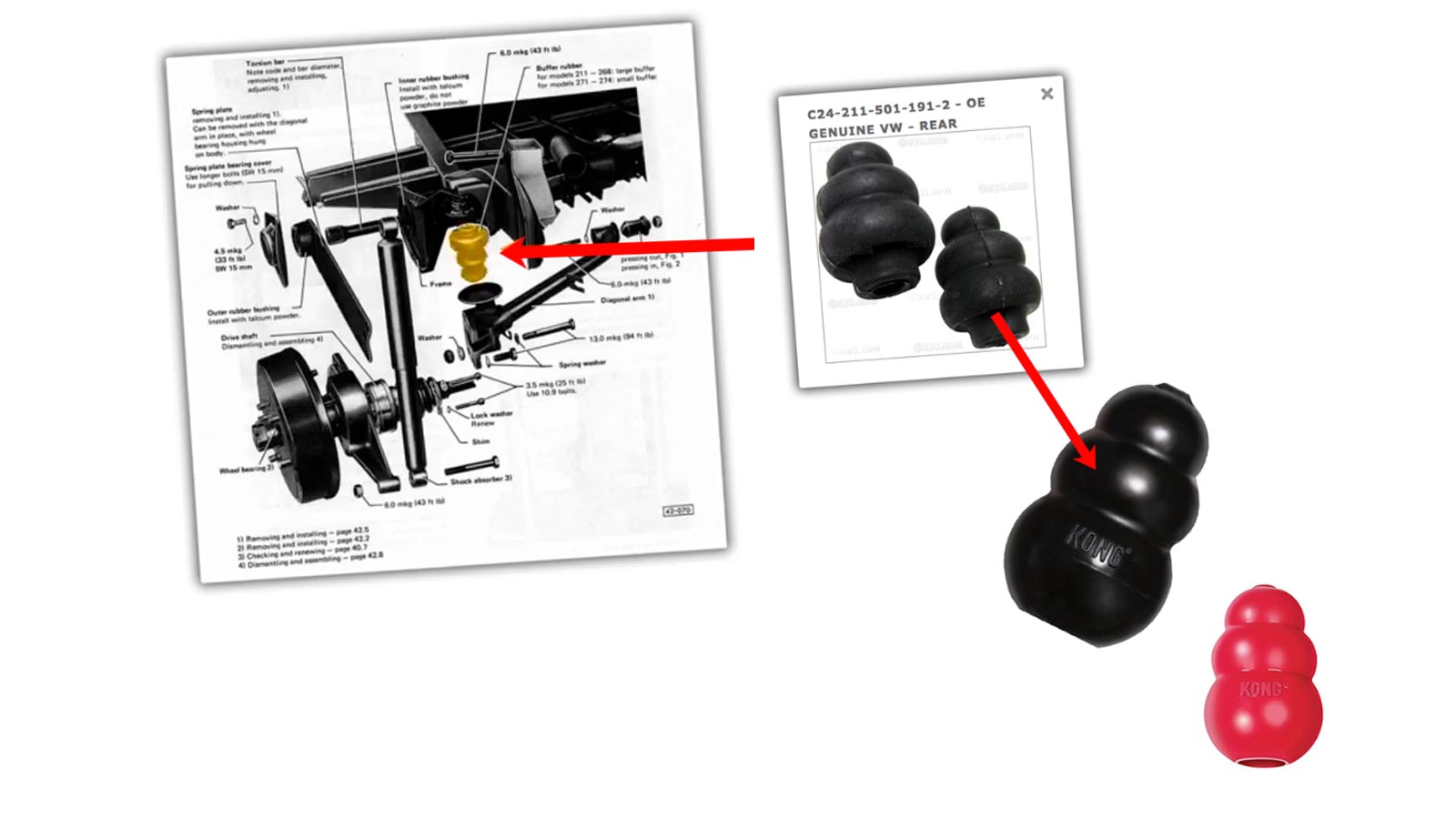 So, there you go. Two unexpected connections between something automotive and something toy-related. And I didn’t even mention the VW Bus toy I helped design, not even once!

I'm a co-founder of the Autopian, the site you're on RIGHT NOW! I'm here to talk to you about taillights until you cry and beg me to stop, which I absolutely will not. Sorry. Hug? Also, David's friend.
Read All My Posts »
PrevPreviousWhen The Horse Was Almost A Cat: Cold Start
NextPsst, Hey Buddy, Wanna Buy A Sketchy Dodge?: 2004 Neon vs 2010 AvengerNext