Toyota Announces A Manual Transmission For The GR Supra, Finally Giving The Internet What It Wants 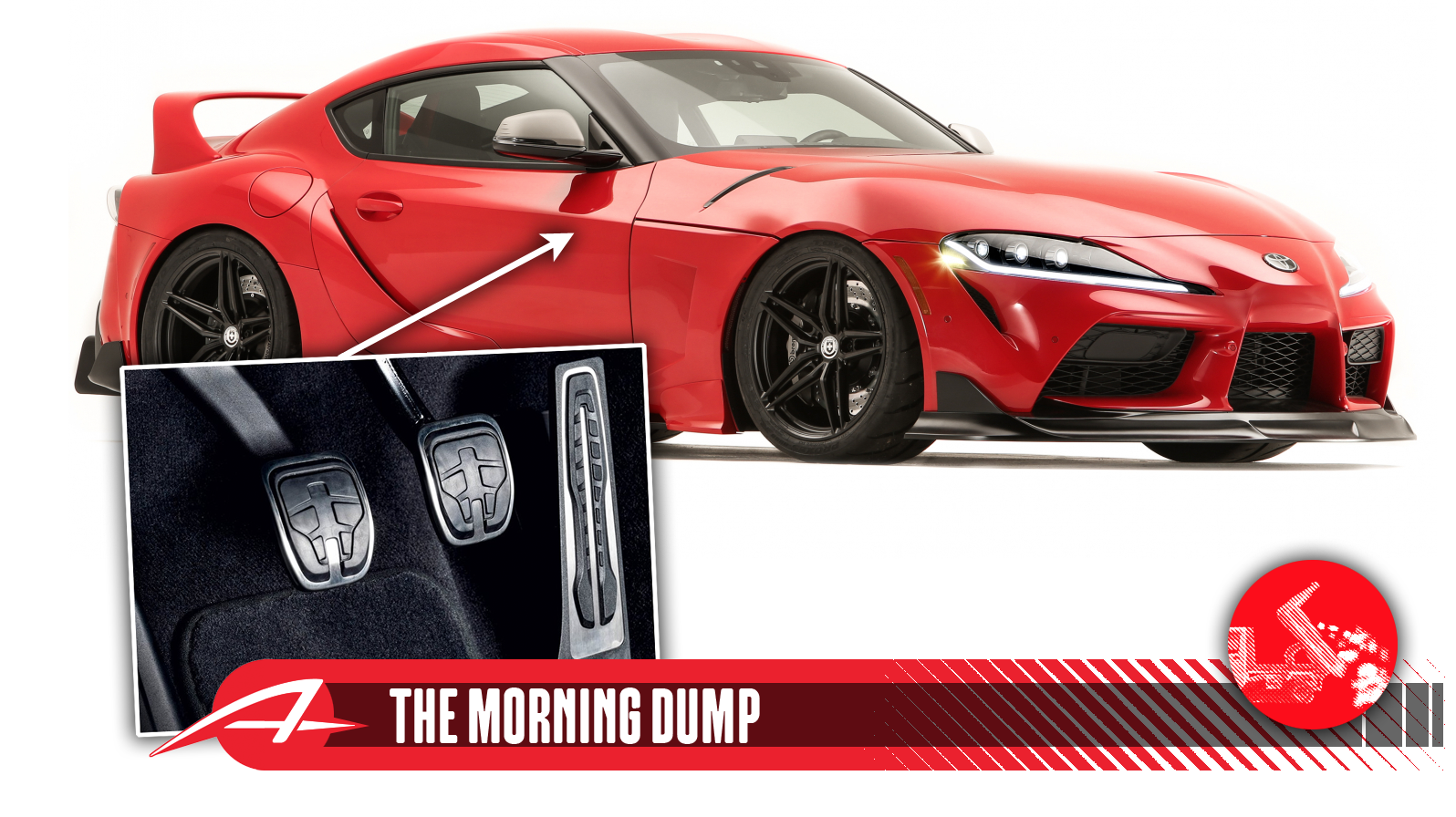 The GR Supra gains an extra pedal, it’s No Time To Die for the Chevrolet Trax, and Toyota issues a recall. All this on today’s issue of The Morning Dump.

It’s about damn time. Three model years into the GR Supra’s production cycle, Toyota’s finally pulling it together and chucking in a manual gearbox. Look, the ZF 8HP eight-speed automatic gearbox that the GR Supra launched with is arguably the best conventional automatic gearbox on the planet right now. It’s fast, smooth, strong and reliable. However, when you want to go up against the Porsche Cayman in the engaging mid-priced sports car market, you need a three-pedal option. Well, if the fanboys didn’t light a fire under Toyota’s ass, the new Nissan Z might well have. Nissan updated the 370Z’s chassis, threw in a twin-turbo 400-horsepower V6 driving the rear wheels through a six-speed manual gearbox and a mechanical limited-slip differential, and made the internet lose their collective shit. No joke, at least two of my friends have orders down and one is coming out of an E39 M5. Hello promises of driving Nirvana.

Toyota took to Twitter today to tease the forthcoming manual GR Supra with a simple shot of three pedals trimmed in rubber and brushed metal. As expected, the visible arms of the pedalbox look very much like those on the current M3 – we wouldn’t be surprised if it’s actually the same assembly. More importantly, Toyota’s issued a picture of the back of the manual Supra showing a special red Supra badge exclusive to manual cars. A special badge for GR Supra owners who prioritize engagement over speed is pretty sweet, but I’m sure we’ll see aftermarket copies on automatic models.

As for gearboxes, the ZF S6 six-speed manual gearbox has applications that bolt right up to the B58 inline-six’s bellhousing, although torque ratings do vary. The best bolt-up gearbox would be the ZF S6-53BZ with its 600 Nm (442 lb.-ft.) torque capacity rating. This variant of the ZF S6 gearbox blends well with Toyota’s reliability-focused philosophy and has never been used behind a B58 engine. Instead, the ZF S6-53BZ found its way behind BMW’s N54 inline-six, S58 M inline-six, N62 V8, N63 twin-turbo V8, S65 M V8, S85 M V10 and S63 twin-turbo M V8. That’s right, we first saw the S6-53BZ almost twenty years ago in the 2004 model year BMW 545i and 645Ci. Perhaps more importantly, the S6-53BZ is the only variant of the S6 gearbox rated to handle the six-cylinder Supra’s torque. Of course, there’s also a slim chance that the manual GR Supra won’t end up with a ZF S6-53BZ at all – Toyota UK claims the three-pedal sports car will feature “an all-new, tailor-made manual transmission.” Just keep in mind that all-new for Toyota doesn’t necessarily mean all-new for BMW.

While we’re all eager to learn more about the three-pedal GR Supra’s oily bits, it looks like we might have to wait just a little bit longer. Toyota says that more information on the manual GR Supra will be shared over the coming weeks. Honestly, it’ll be interesting to see how a manual GR Supra does on the market. The new Z is almost in the hands of customers and likely to be cheaper while the next-generation BMW M2 is set to debut this year.

“Yes, it’s me, the Chevrolet Trax. Look, I know I’ve been a bit of a shitbox but I promise I can change. Honestly, I really can. I’ve been on a big soul-searching mission this year and I feel like it’s time that I reinvented myself. It might take a few more months, but the world will see the new me soon. I’ve been content with coasting by on my post-bankruptcy interior plastics, offering reasonable transportation to honest, hardworking people, but I feel like I can do so much more in life. You might like the new me, just give me a chance.” Suddenly, the receiver clicks. Another stranger in the fog, pleading across operator boards and down transmission lines, vanishing as soon as they appeared.

Okay, that’s not quite how it happened, but a GM spokesperson told Autoblog today that not only are rumors of the Chevrolet Trax’s death greatly exaggerated, a new Trax will actually be coming along this year. Figure a debut sometime in the fourth quarter of 2022 with production said to start in 2023. Honestly, it feels a bit strange knowing that the Trax will return. Doesn’t the Trailblazer serve the same purpose as a value-focused entry in the subcompact crossover segment? Apparently not, and as I’m never one to complain about more cheap cars on offer, I’m quite interested in seeing what GM cooks up for the next Trax.

From Code Beige To Code Brown

Intentional oversteer in a safe environment can be cool and fun, but unintentional oversteer on the street can generate a serious code brown. According to Marketwatch, Toyota and Lexus are recalling 460,000 vehicles produced between 2020 and 2022 for doing hectic skids when owners might not expect. Normally, a vehicle’s stability control program should be active by default whenever the vehicle’s switched on. However, software bugs aren’t normal and certain Toyota models may occasionally disable their stability control upon switching the ignition on. While greasy, steezy oversteer in a hydrogen-powered Toyota Mirai sedan sounds pretty freaking awesome, surprise terminal understeer in a Lexus NX350h compact luxury crossover sounds decidedly less awesome. The recall also encompasses the Toyota Venza, RAV4 Hybrid, RAV4 Prime plug-in hybrid, Sienna Hybrid, Highlander Hybrid, Lexus LS500h, NX450h+ plug-in hybrid and LX600. That last one’s a bit weird as the new ginormous Lexus SUV is the only non-electrified model on the list. Curiously enough, this recall isn’t deemed a safety issue, but rather a matter of non-compliance. Customers are expected to be notified by mid-June to take their vehicles in to the dealer for a software update.

Whelp, time to drop the lid on today’s edition of The Morning Dump. Will a manual gearbox actually help GR Supra sales? While it’s definitely a welcome addition for row-your-own enthusiasts, it’s entering the marketplace in a time of renewed competition. As much as I like the GR Supra, I liked the chassis of the old Nissan 370Z better. It felt a little more neutral, a little more predictable in spirited cornering, a little more usable. Assuming Nissan keeps that feel while adding heaps more horsepower, the new Z should be a winner. Moreover, the new M240i has unbelievably incredible body control and neutrality, so I have huge hopes for the next M2. If you had somewhere in the ballpark of $50-70k to spend on a new performance car, what would you drive home?

Thomas is a Nu Rave-blaring, heel-toe downshifting, maple syrup-swilling, chassis-geeking, junkyard parts-hauling, floppy-haired scenester who's been writing about cars since college. His current ride is a 2006 BMW 325i with the six-speed manual gearbox. Instagram: @thomas.hundal Twitter: @thomashundal
Read All My Posts »
PrevPreviousTo The Arrogant Rich Guy Who Tried Pressuring Me Into Selling My Car: Get Bent
NextHere’s My Final Design Of An Electric Version Of A Classic American Wagon: A Car Designer Sketches Your IdeasNext