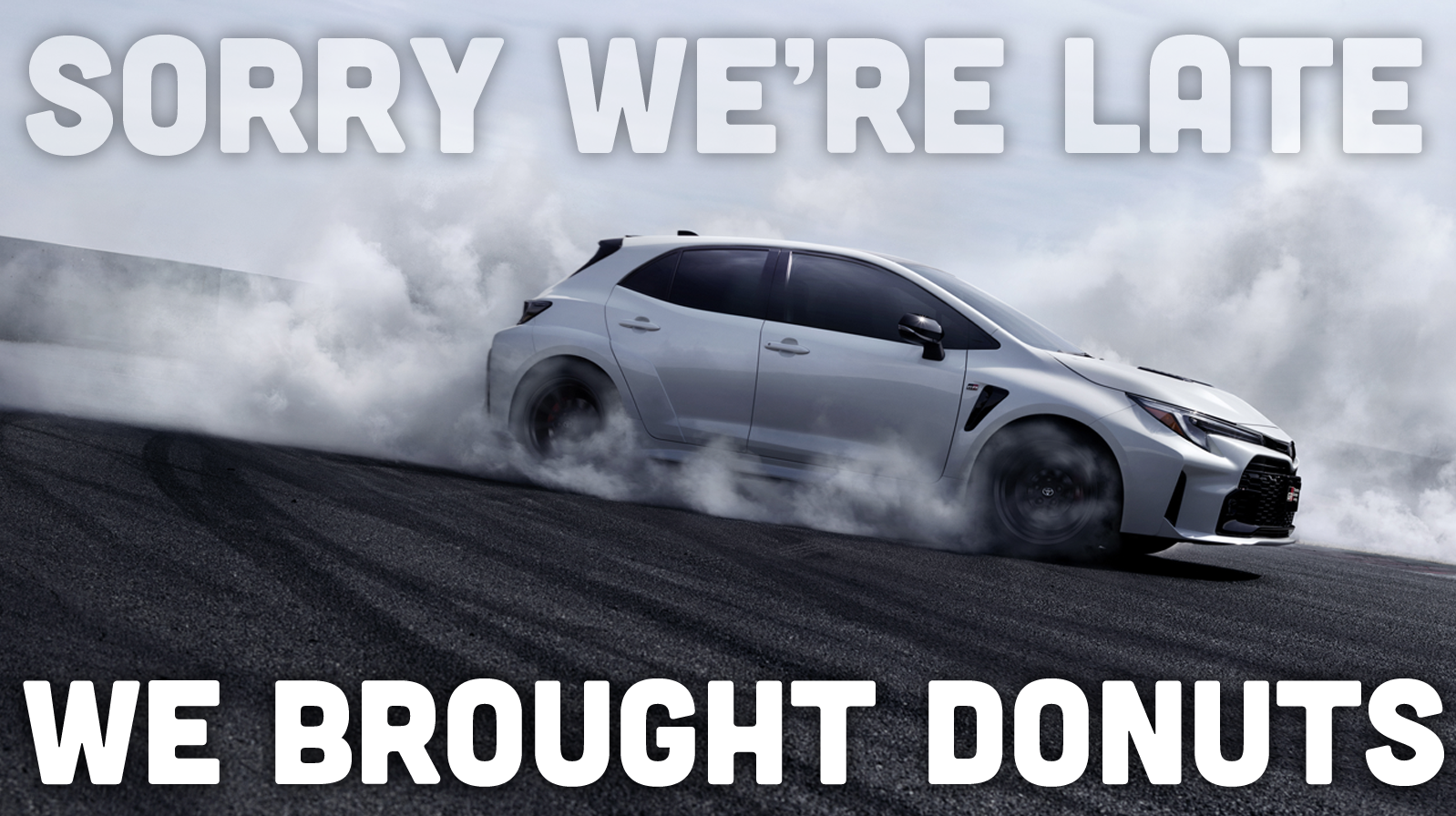 It’s no secret that the last seven years haven’t been kind to all-wheel-drive sport compact cars. The Mitsubishi Lancer Evolution? Dead. Ford Focus RS? Dead. Subaru WRX STI? In purgatory. The Toyota GR Yaris? Brilliant, but not sold in Canada or the United States. For a good minute, it looked like the Volkswagen Golf R would be the sole hi-po survivor. But wait. Blasting out of the clouds comes a four-wheel-drive Toyota with bigger flares than your dad had on his jeans in the ‘70s. Brace yourselves, America – the GR Corolla is coming in hot.

[Editor’s note: We realize we’re late on this story, but our site launched after the GR Corolla’s debut. And since we’re going to be writing quite a bit about this hot hatch, we need an intro post. So if you’ve been living under a rock, we’ve got your back! -DT] 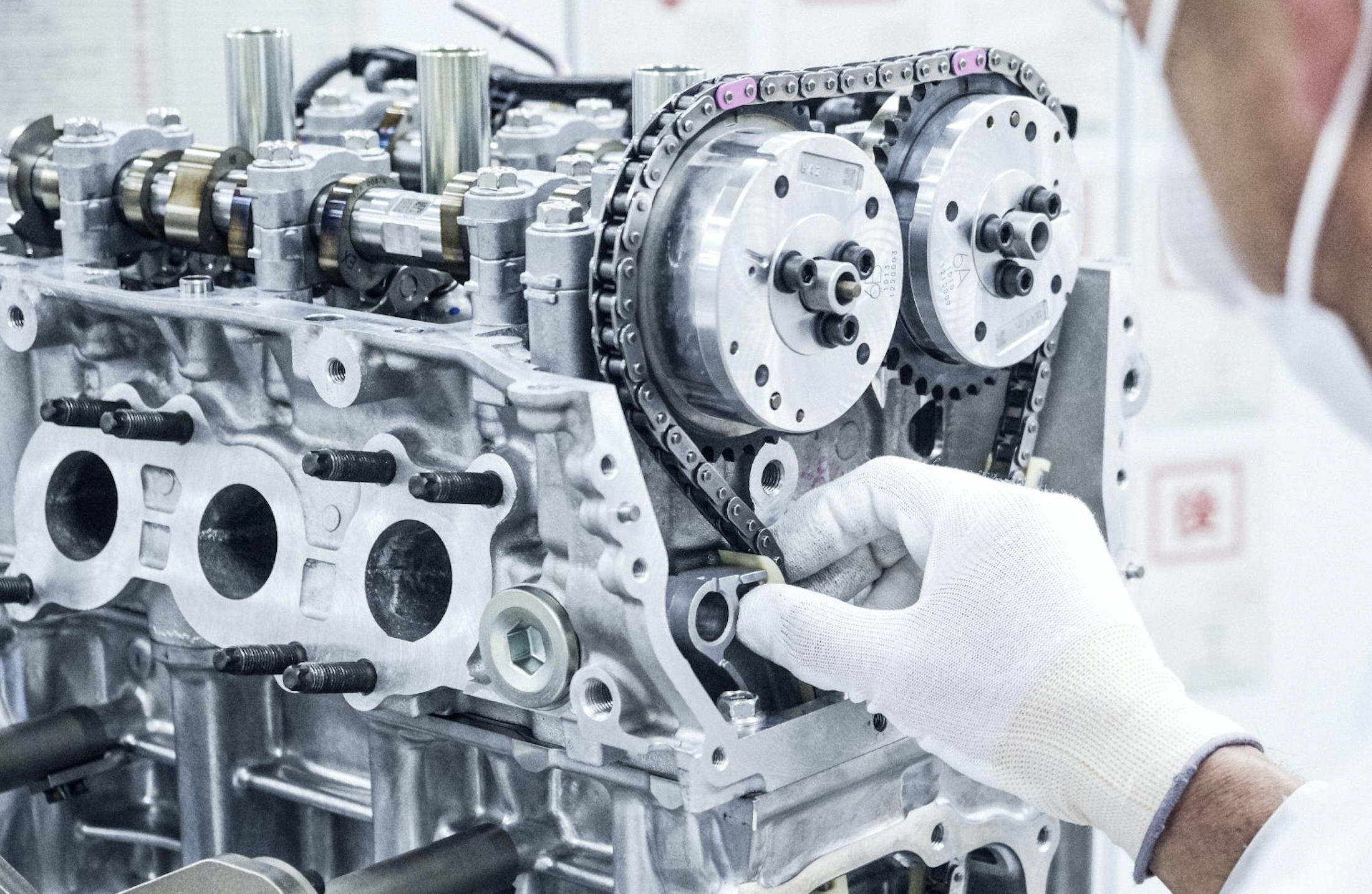 Let’s start with the engine. The rumormill knew that the GR Corolla would get a bump in output over the GR Yaris, but I don’t think anyone expected a full 300 horsepower from its G16E-GTS 1.6-liter turbocharged three-cylinder engine. That’s 100 horsepower per cylinder, 187.5 horsepower per liter and the title of the most powerful production three-cylinder engine in the world. More importantly, peak power occurs just 500 RPM before the 7,000 RPM redline while torque is a stout 273 lb-ft peaking from 3,000 RPM through to 5,500 RPM. Judging by the spec sheet, this engine should be as frenetic as a Jack Russell Terrier on a freshly-polished linoleum floor. 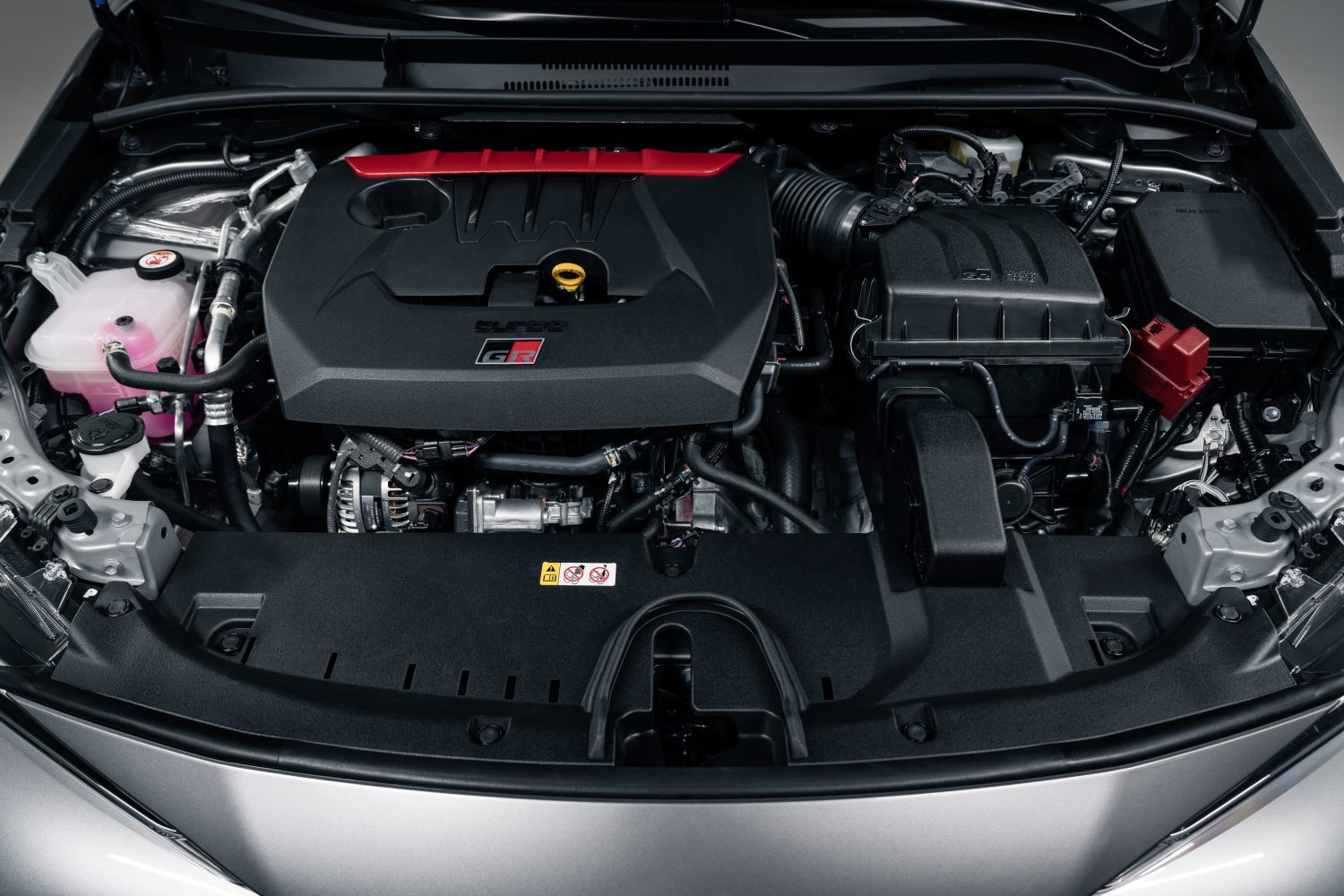 Power gets to the ground through Toyota’s GR-FOUR all-wheel-drive system, although how much torque goes to each axle is a matter of driver preference. This all-wheel-drive system features three modes selectable through an Oreo-sized knob in the center console – a 60:40 front-to-rear split for everyday driving, a 30:70 split to promote rotation and a 50:50 split for maximum stability. As for gearboxes, customers have a choice between getting a short-throw six-speed manual gearbox with automatic rev-matching or getting the fuck out of the showroom and walking over to the nearest Volkswagen dealership. Without an existing DCT in their parts bin, the people at Gazoo Racing aren’t here to half-ass two things – they’re here to whole-ass one thing. Just as the hot hatch gods intended.

Also as intended by the hot hatch gods? A proper manual handbrake for throwing the chassis into lurid shapes. You just love to see it, don’t you? As for the hydraulic brakes, they’re slotted 14-inch ventilated discs with fixed four-piston calipers up front and 11.7-inch ventilated discs with fixed two-piston calipers out back. Proper fast-car stuff. Fixed dampers and 235/40R18 Michelin PS4S summer tires keep the GR Corolla glued to the ground and there’s a Performance Package with front and rear Torsen limited-slip differentials on offer for limpet-like grip.

But what about weight? Part of the GR Yaris’ appeal is that it’s tiny and chuckable. It looks like we have an answer for the GR Corolla and it’s a bit of a mixed bag. Clocking in at 3,248 pounds, the GR Corolla is an estimated 360 pounds heavier than the heaviest version of its little brother. However, at 10.82 lbs./hp to the GR Yaris’ 11.2 lbs./hp, straight-line pace shouldn’t suffer a bit. 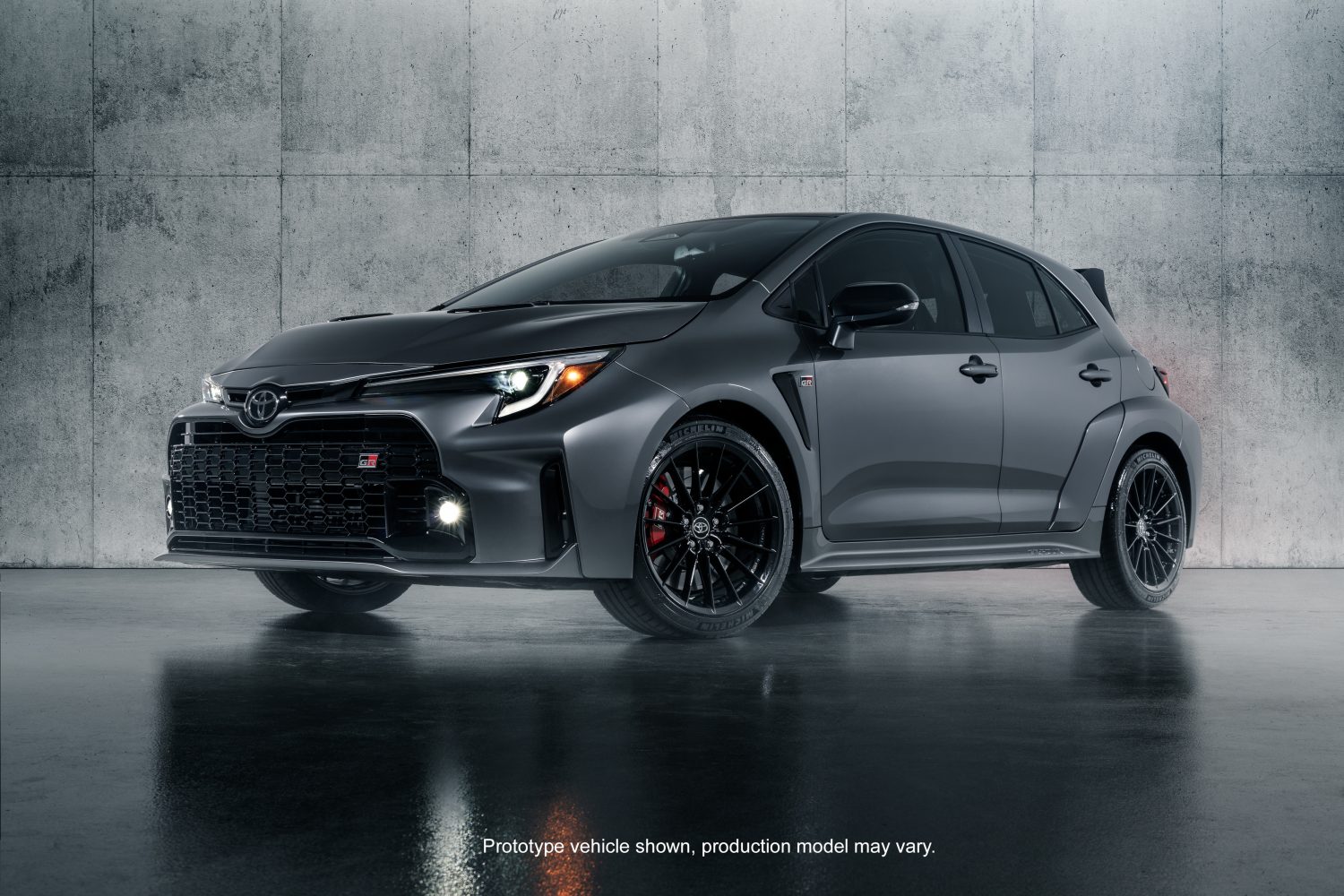 Of course, crazy specs and a crazy aesthetic go hand-in-hand, so the GR Corolla looks like something out of a Colin McRae Rally player’s fever dream. Instead of adopting the outgoing Civic Type R’s George Foreman approach to grille-like elements, Toyota’s aiming to podium at this year’s widebody nationals. The rear flares look to reach over a third of the way forward across the rear doors while the front fenders cram four massive ducts into the flared areas alone.

More ducts are featured in the rear bumper, while that massive grille up front is almost entirely functional. Sweet. The GR team must be big fans of either Total Recall or Paul, as the GR Corolla sports three exhaust tips. Unlike the tips on the outgoing Civic Type R, these are actually fairly spread-out, with a massive oval howitzer in the center of the rear valence with a smaller exhaust tip on each side. Topping it all off are black 15-spoke cast aluminum 18-inch wheels that appear to have nice concavity. With bodywork this loud, the wheels don’t need to do much talking. 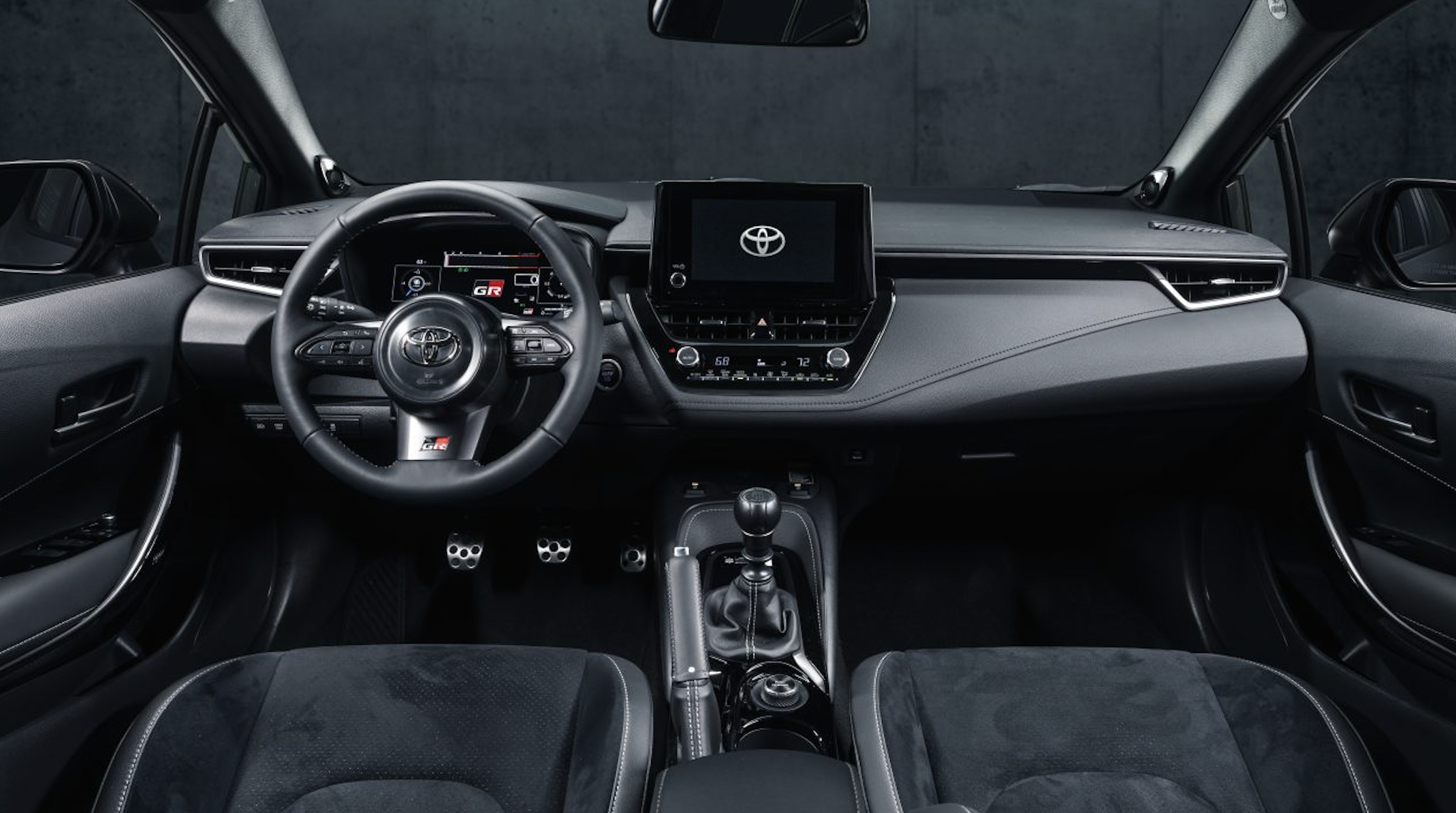 On the inside, GR Corolla owners will be treated to accouterments not found in lesser trims. Sports seats with proper bolstering are on tap to keep front occupants firmly in place, while a GR-specific three-spoke steering wheel looks absolutely lovely to hold. Toyota’s new-generation infotainment system makes an appearance here, along with a GR-specific 12.3-inch digital gauge cluster that can display everything from AWD system torque split to turbo boost pressure. While the basic Core trim looks to be fairly spartan, it seems pretty far from a barely-streetable monster. As with most Toyotas, a full suite of driver safety aids is on deck. Radar cruise control, blind-spot monitoring, automatic emergency braking, lane-tracing assistance, all the stuff that makes a Corolla a Corolla. Plus, the GR Corolla can be made plusher with two option packages. The Technology package includes navigation, a JBL stereo and a wireless phone charger. The Cold Weather Package adds heated seats and a heated steering wheel, must-have options for anyone in the snow belt.

If a specced-up standard model isn’t enough, a limited-run Circuit Edition will arrive next calendar year and adds a laundry list of cosmetic enhancements. Its forged carbon roof saves a precious few ounces while a bigger spoiler, a vented hood bulge and gloss black paint on the grille and rear valence add a touch more visual aggression. The Circuit Edition also features a new gray paint called Heavy metal and classes up the interior a touch with suede-and-vinyl upholstery and a shift knob signed by Morizo himself, Mr. Akio Toyoda. Admittedly, none of this is really necessary, but a little pomp and circumstance never hurt anyone. 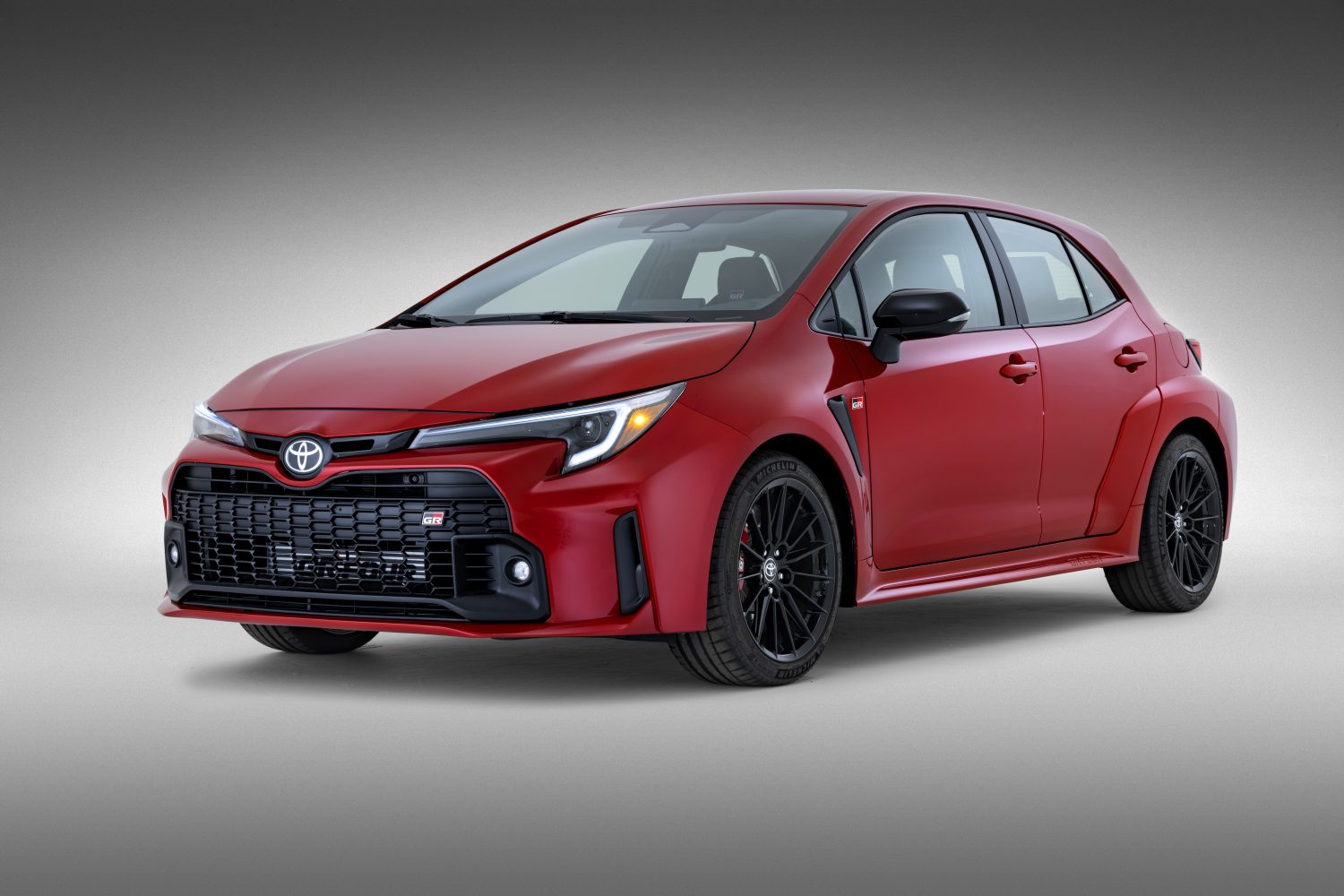 The 2023 Toyota GR Corolla promises to be as subtle as a four-letter-word at Sunday mass, as vulgar a display of power as anything Phil Anselmo could come up with and as practical as a canvas shopping bag. In short, it looks like exactly the sort of car we needed. It’s a Corolla unlike any other, born and raised in Motomachi, Japan. If that rings a bell, it’s because Motomachi is also the birthplace of the legendary Lexus LFA and the coveted GR Yaris, which our editor David Tracy drove a few months ago. Here’s what he thought about the GR Yaris in his Jalopnik review:

So lots of the skin and cabin looks familiar and doesn’t blow me away. Even when I got underway and began rowing from first to third gear as I headed out of town, I remained underwhelmed. “I guess it’s okay,” I thought initially.

Then I arrived in the countryside, smashed the accelerator pedal to the floor, and everything changed.

Above 4,000 RPM, the 1.6-liter three-cylinder turbo engine sings beautifully to the heavens, and all four wheels receive so much torque relative to the vehicle’s meager curb weight that I found myself driving over 100 mph on 62 mph country roads without even realizing it

The 2,900-ish pound car just feels so small and nimble, and yet incredibly stable at higher speeds in turns. The steering feels great, offering the right weight and feel…

The GR Corolla doesn’t share a platform with the GR Yaris, but the engine architecture is the same, as are a bunch of chassis bits like the all-wheel drive system. Needless to say: We’re excited! Pricing for the GR Corolla is expected to be announced closer to its on-sale date this fall. Until then, hold on to your piggy banks.

Thomas is a Nu Rave-blaring, heel-toe downshifting, maple syrup-swilling, chassis-geeking, junkyard parts-hauling, floppy-haired scenester who's been writing about cars since college. His current ride is a 2006 BMW 325i with the six-speed manual gearbox. Instagram: @thomas.hundal Twitter: @thomashundal
Read All My Posts »
PrevPreviousLotus’ First SUV Is A 600 HP Electric Beast That Can Detect The Presence Of Children
NextI Led The Design Of The Tesla Model S’s And Ford GT’s Suspension. Now I’m Answering Engineering Questions For The Autopian. Where Did I Go Wrong?Next