The worst part of fixing up an old car is not repairing rusted out body panels, unsticking fasteners that have welded themselves into place, or even troubleshooting a carburetor that refuses to be tuned right. As hair-pullingly frustrating as all of those can be, they are arguably what some people call Type II fun. [Editor’s Note: I thought that was a VW Bus reference but it isn’t. – JT] Despite all the pain and suffering that comes with any of those tasks, in the end, you get to feel good about what you accomplished.

What never feels good though is getting nickel and dimed as you round up all the fiddly little replacement parts that an old car inevitably ends up requiring. A car you thought you got a great deal on looks a lot less financially wise when you start realizing you’re going to need a $60 turn signal lever, a $20 dome light cover, two $80 tail light lenses, a piece of door trim for $120, and a couple dozen other things.

My current money pit/labor of love is a 1982 Toyota pickup that I bought from my parents in February. It’s not the most exciting 40-year-old vehicle around, but they bought it brand new, and it holds a lot of memories for me. I learned to drive stick shift in it. I had the worst camping trip of my life in Death Valley in it. When I found out my parents were going sell it, I had to buy it.

Fortunately, it’s in pretty good shape.  It spent its whole life here in LA, so it has virtually no rust, and my dad is a responsible car owner, so it’s been well cared for. Still, it needs a bunch of those nagging little things.

While working on it recently, I noticed that one of the little bulbs for the rear side marker lights was dangling by its wires from under the truck. When I unscrewed the two fasteners that were supposed to hold the housing to the body, the entire thing (minus the lens) crumbled into a rotted plastic powder. The marker light on the other side was the same way. A quick glance at the front marker lights suggested they were also going to be trouble. 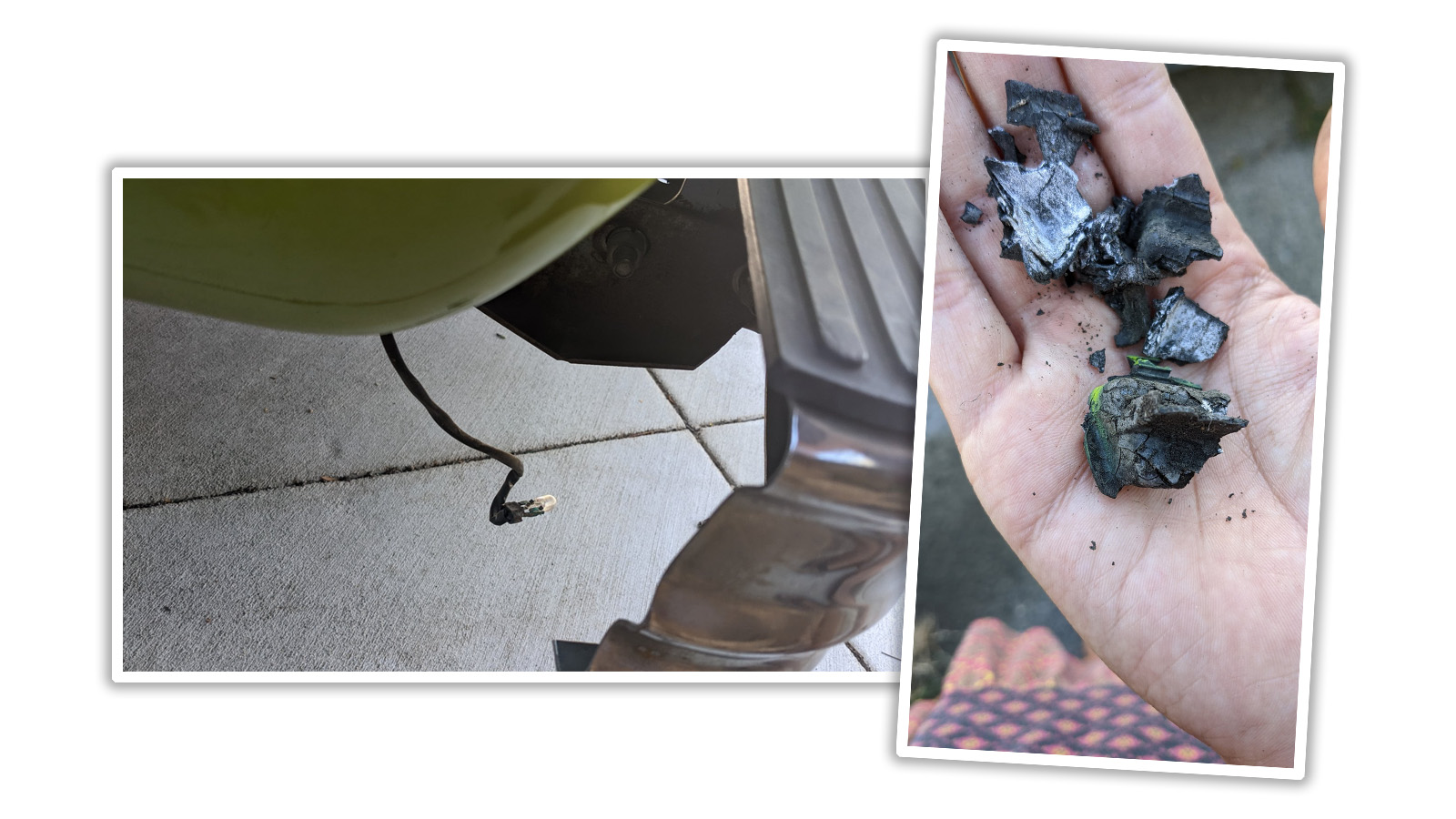 I went looking online for replacements and I found them, but at roughly $40 each, they aren’t cheap. I wasn’t planning on spending $160 on marker lights and I resolved that I wouldn’t.

[Editor’s Note: Part of why I’m running this – other than I think Emily is great and has a lot of great skills I’m delighted to show you – is that my goal is to make our site the go-to side marker lamp location on the internet. Side markers are the most underappreciated automotive lighting category, and this is part of my personal mission to change that. – JT]

3-D Printing to the rescue

Of my many, many hobbies, most of which have absolutely no practical applications (building sculptures from animal bones etc.), 3-D printing actually has some uses around the house and in the workshop.

Three-D printing isn’t a new technology anymore and it’s been widely adopted enough that I think I can skip explaining it in depth, and just say it allows the average person to print objects at home. A lot of 3D printing enthusiasts use their printers to churn out busts of Thanos, low-poly Pokémon, and little planters for desk succulents, but I mostly use my printer for solving problems. Think: making brackets, clamps, knobs for electronics, and even a hard-to-find drive belt for a cassette player.

So, in an effort to save myself from spending $160 on lights for the truck, I got to work with some CAD software and my 3D printer.

Since the entire housing for the marker light had disintegrated, including the socket the held the light bulb, I wasn’t going to get out of this without making any purchases. To get started, I went to my local auto parts store and found some little light bulb sockets that are somehow meant to fit Ford and GM vehicles manufactured between 1953 and 1999. It didn’t matter which vehicles they were meant for though, because I was going to be printing my own adapters to fit them to my truck, and at $4.99 each, they weren’t a bad bargain. 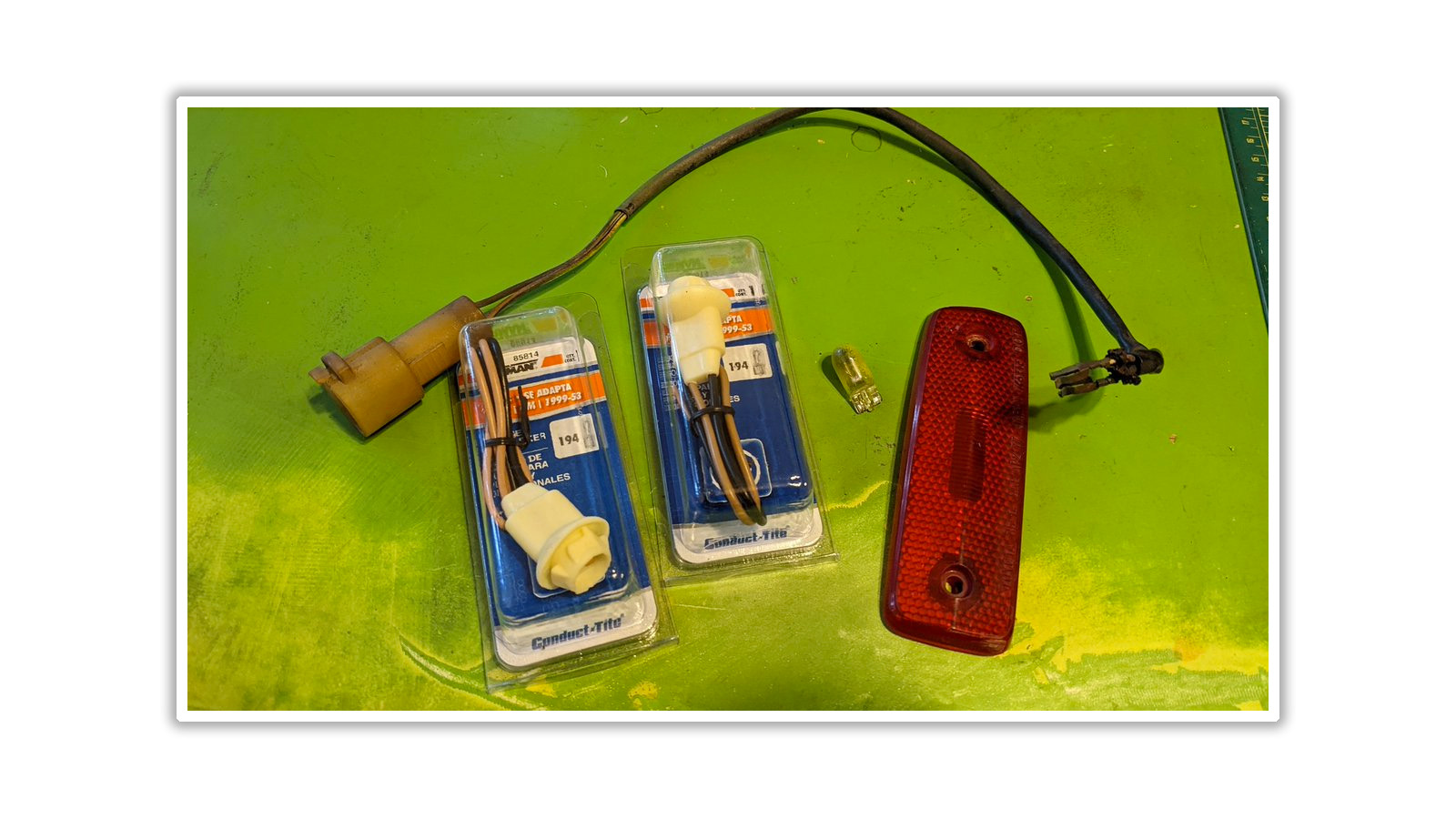 With those in hand, I began actually designing my parts. On one end, the printed piece would need to fit the socket. On the other end, it needed to act as a gasket between the marker light’s lens and the truck’s body. The socket end was easy. My calipers told me I needed a hole 14mm in diameter. Simple enough. The lens end was harder. The lens isn’t just a rectangle that I could measure and recreate in CAD software. It has sweeping curves and tapers that can’t be easily captured with simple measuring tools. Sure, I could approximate it as a rectangle, but that would look like shit, and if I’m going to work on my truck, I want the results to look nice. 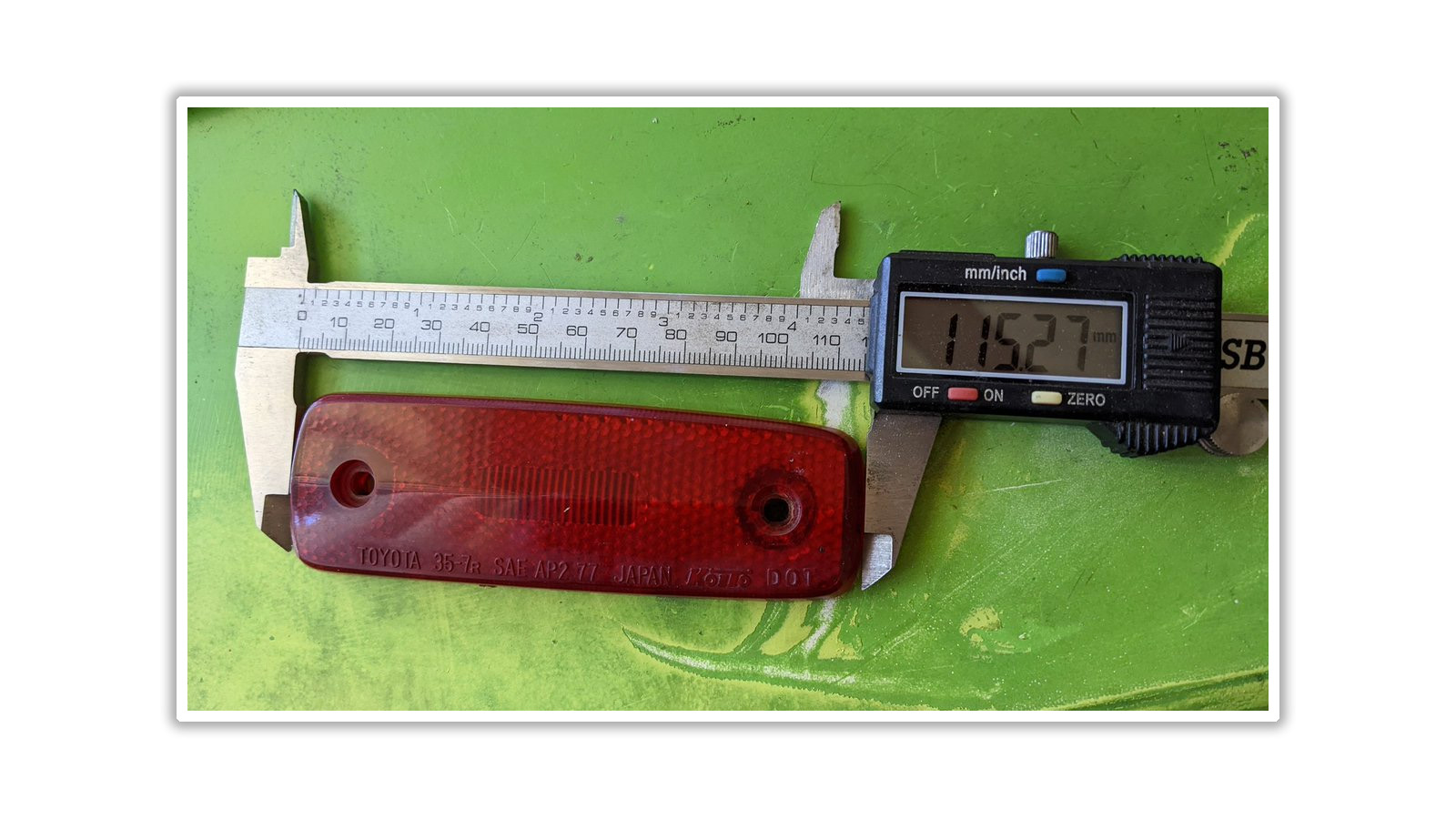 Fortunately, I’ve learned a trick for this kind of thing. If you have a relatively flat part with complex curves, you can do a pretty good job capturing its silhouette by laying it on a piece of graph paper and taking a photo of it. Because lenses distort the image they’re capturing to some extent, you want to take the photo from as far away as possible while still having the object clearly visible. The graph paper provides reference lines you can use later to see and fix any distortions that still occurred. 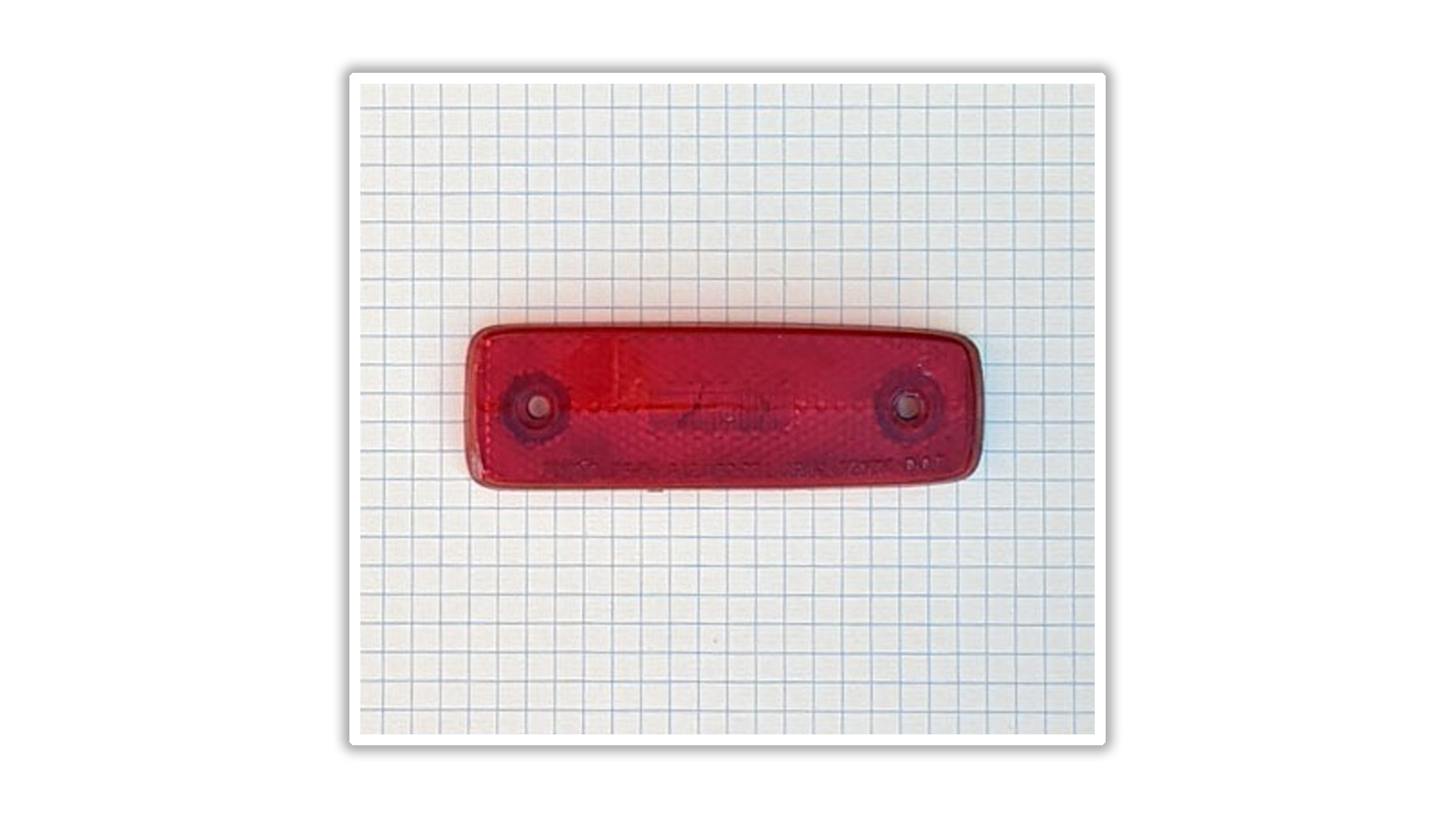 After I took the photo, I imported it into photo-editing software, cleaned it up a bit, fixed the little bit of distortion in the image, and then exported it to Adobe Illustrator, which would allow me to trace the outline of the lens and turn it into a file that CAD software understands. 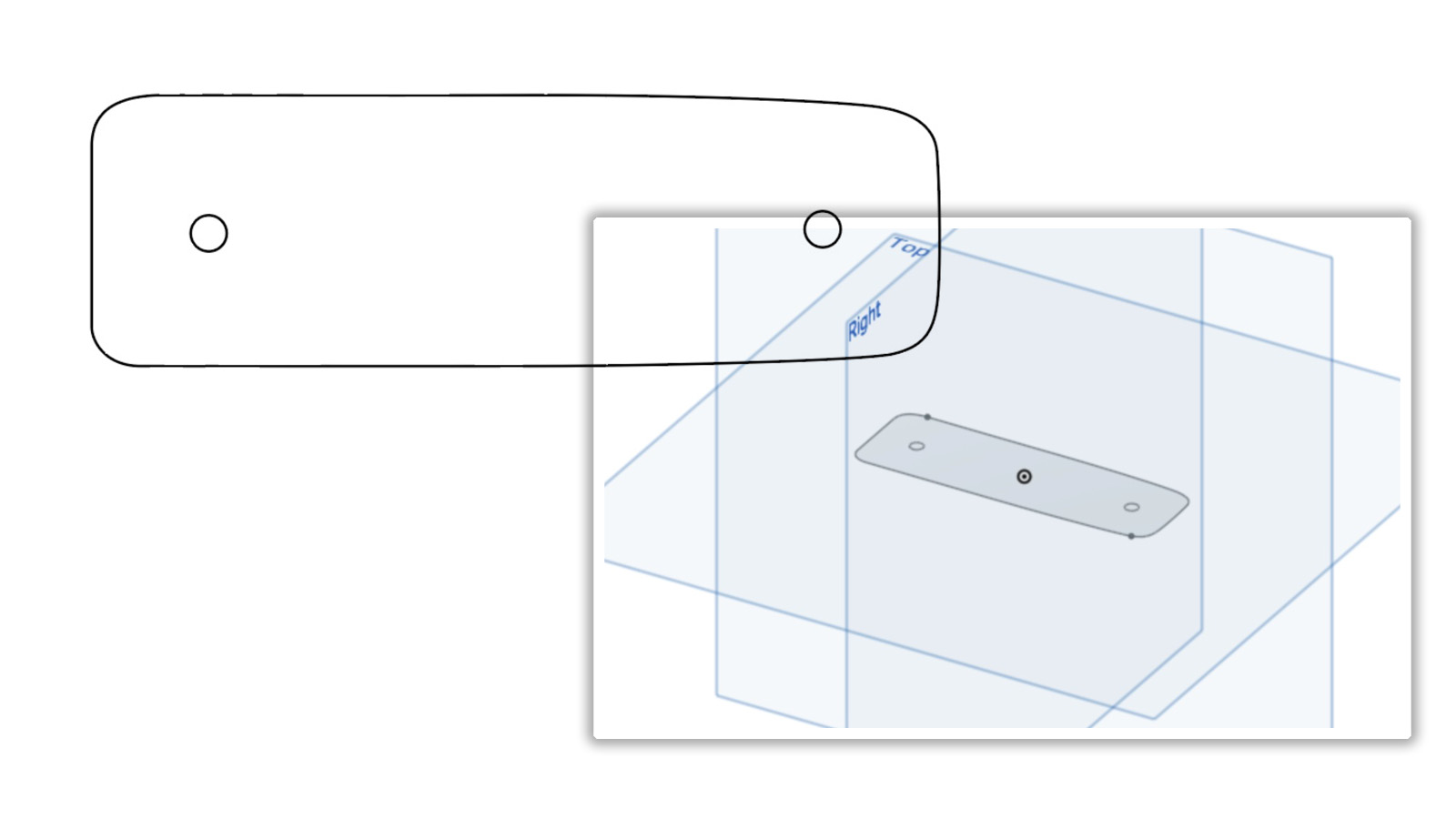 Then I started designing. The part isn’t complicated. The gasket between the lens in the body has the same outline as the lens itself, except bigger by 1/16th of an inch. It’s got two holes for the mounting screws to pass through, and in the center, it lofts up into a little housing for the bulb and socket. 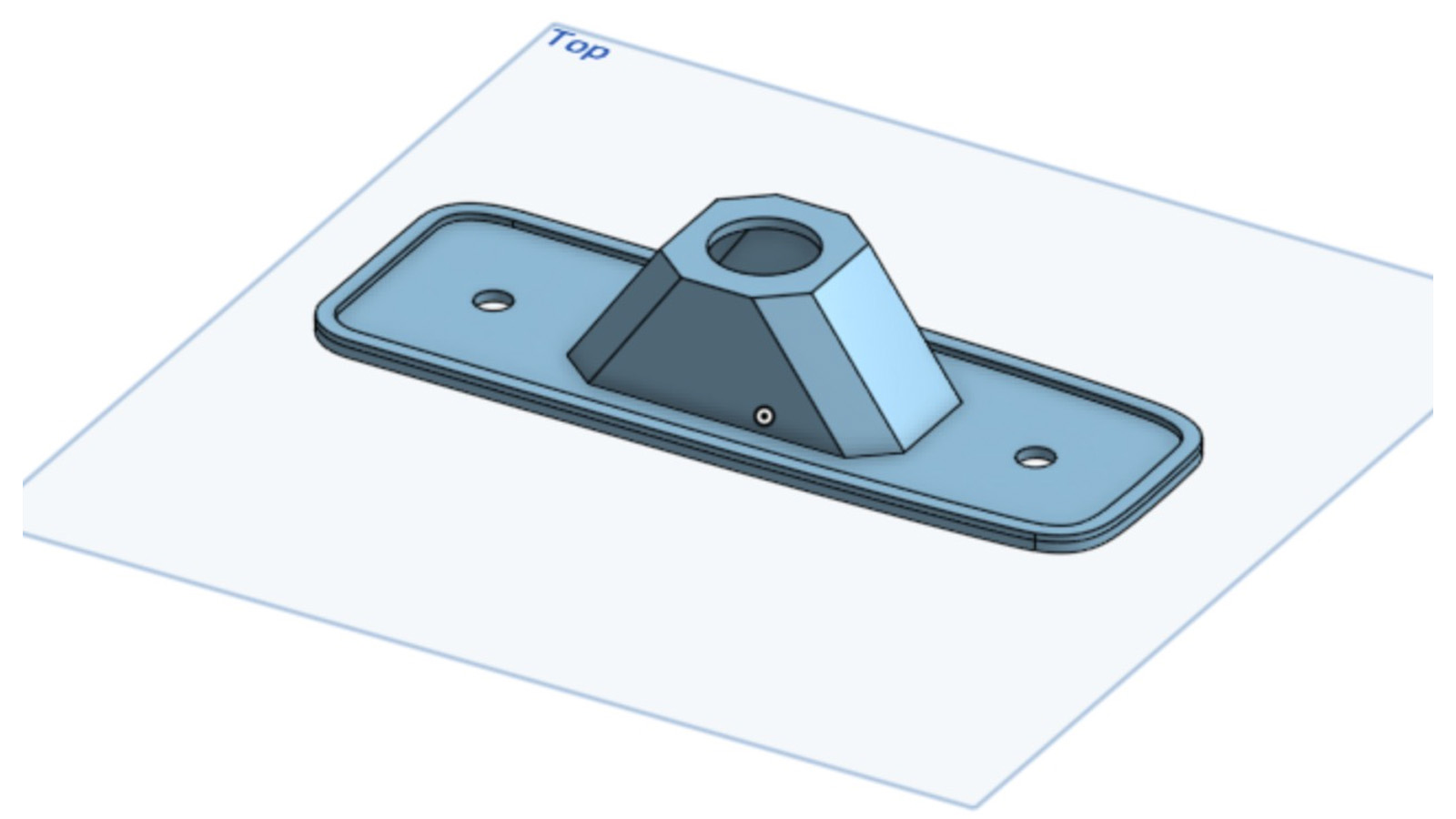 After designing the part, I set it up to print (a process called ‘slicing’) and printed in thermoplastic polyurethane (TPU), a tough, rubbery plastic. 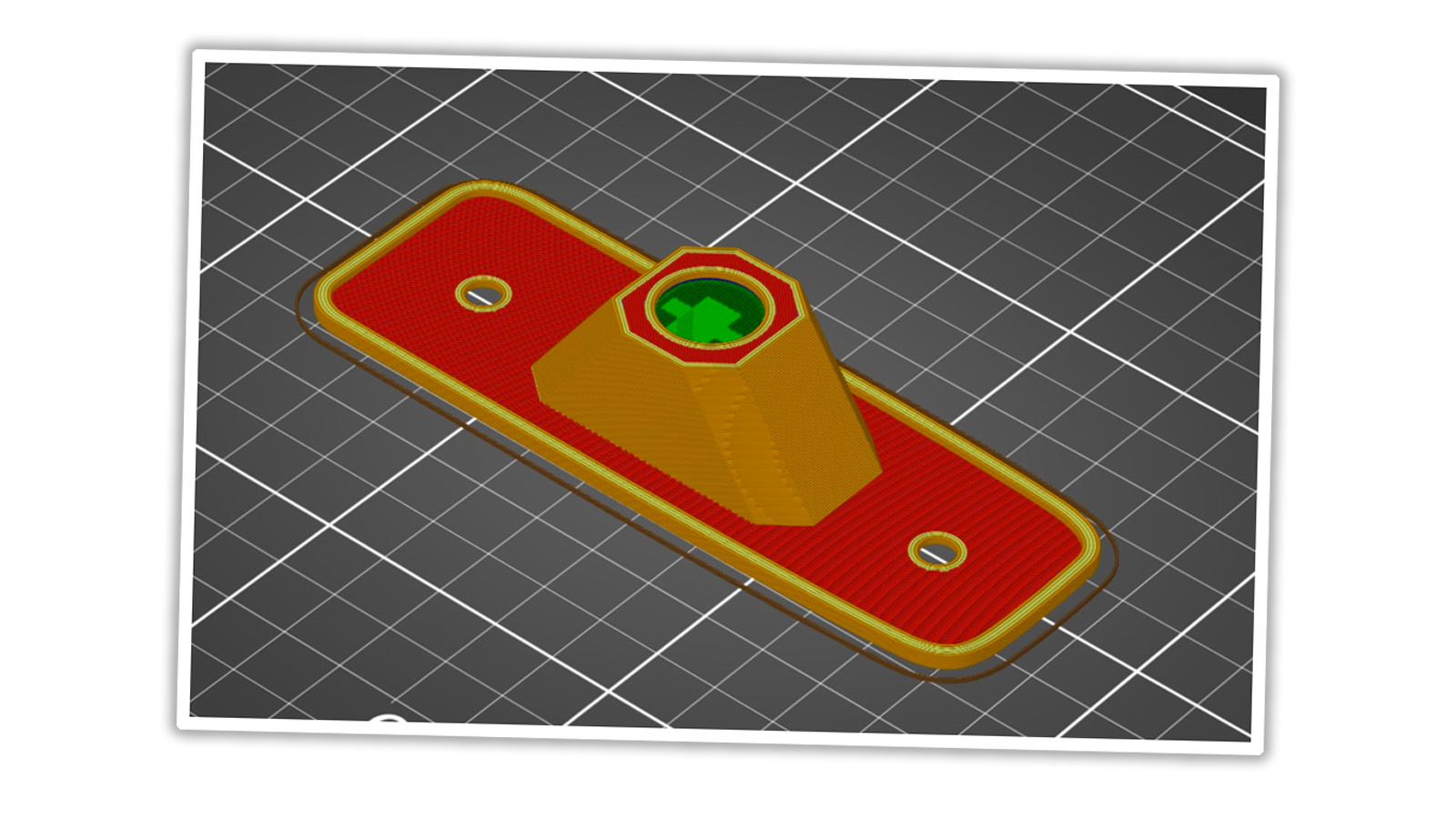 TPU was ideal for this part because it holds its shape at higher temperatures than some other plastics used in 3D printers, and it’s flexible, which allows it to conform tightly to the body panels of the truck. Each housing only took 90 minute to print, which is pretty darn quick if you consider that some people have prints that take over 24 hours. 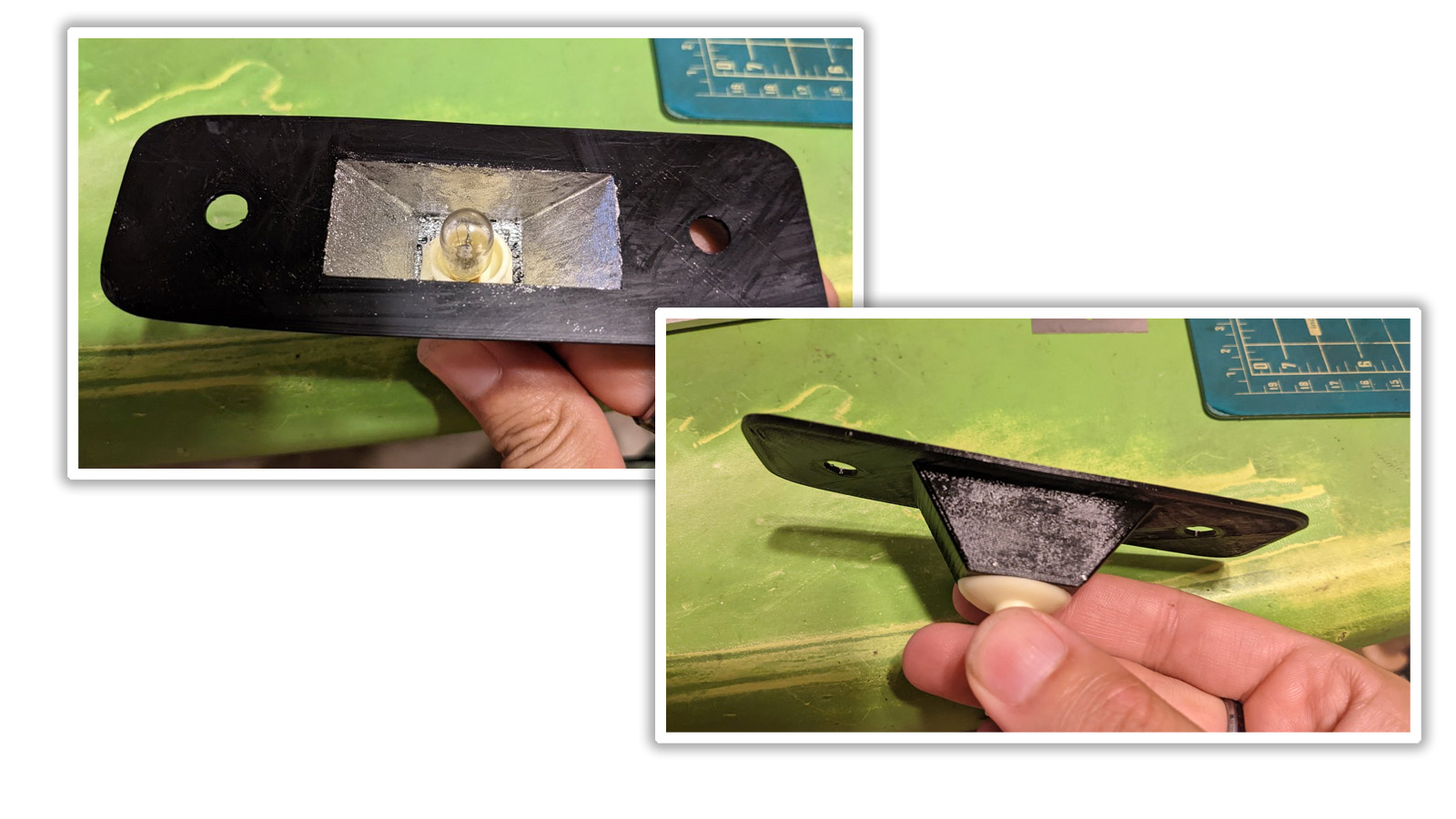 The housings printed cleanly and the sockets mated nicely with the 14mm opening I left for them. I printed them in black TPU so the portion exposed on the outside of the truck would match the appearance of the original part. Black isn’t known for being reflective, so I painted the inside of the housings with some silver nail polish, and the parts were done. 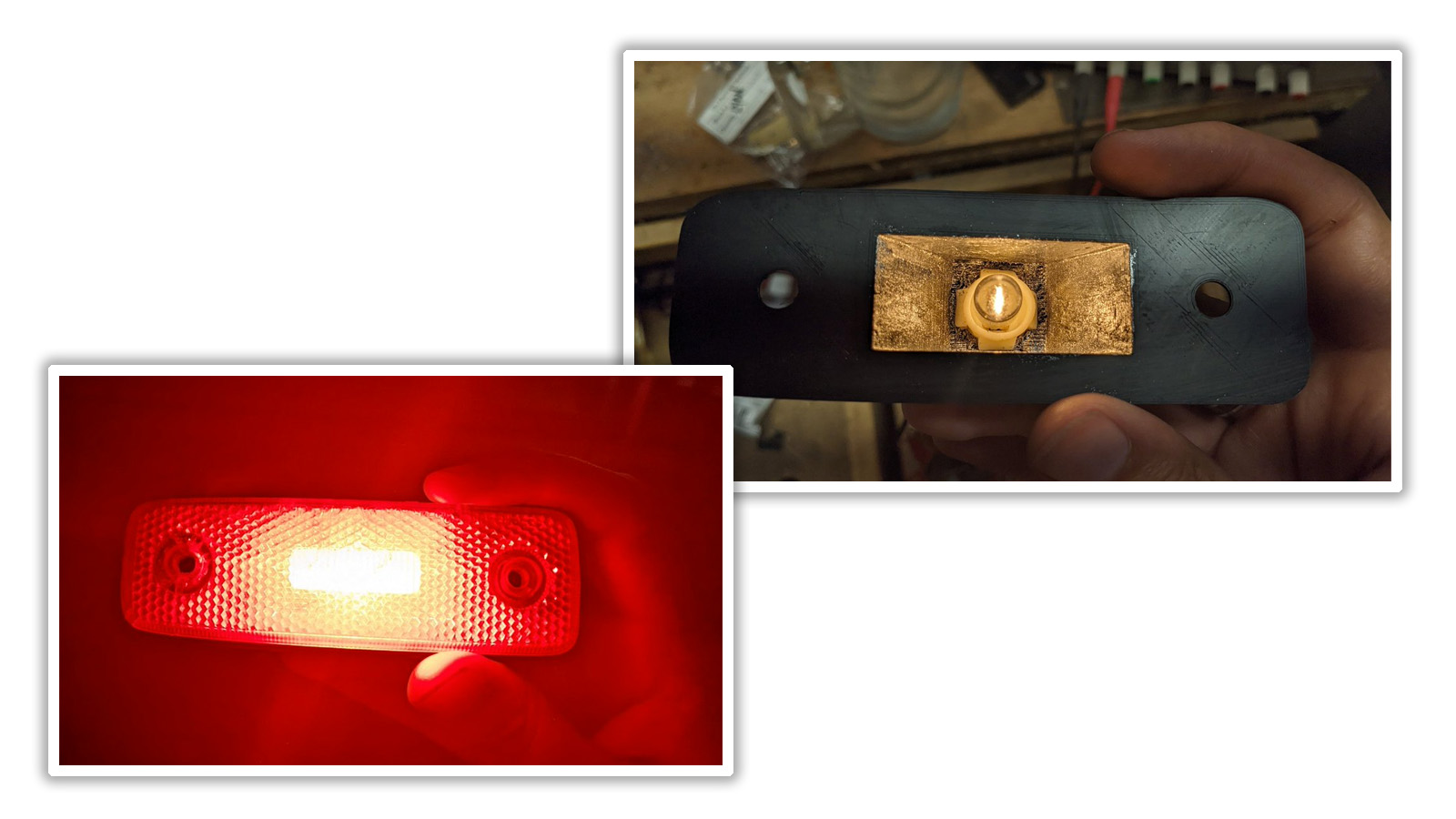 A quick test with my benchtop power supply showed that they lit up very nicely, so all that was left was to wire them up and install them on the truck: 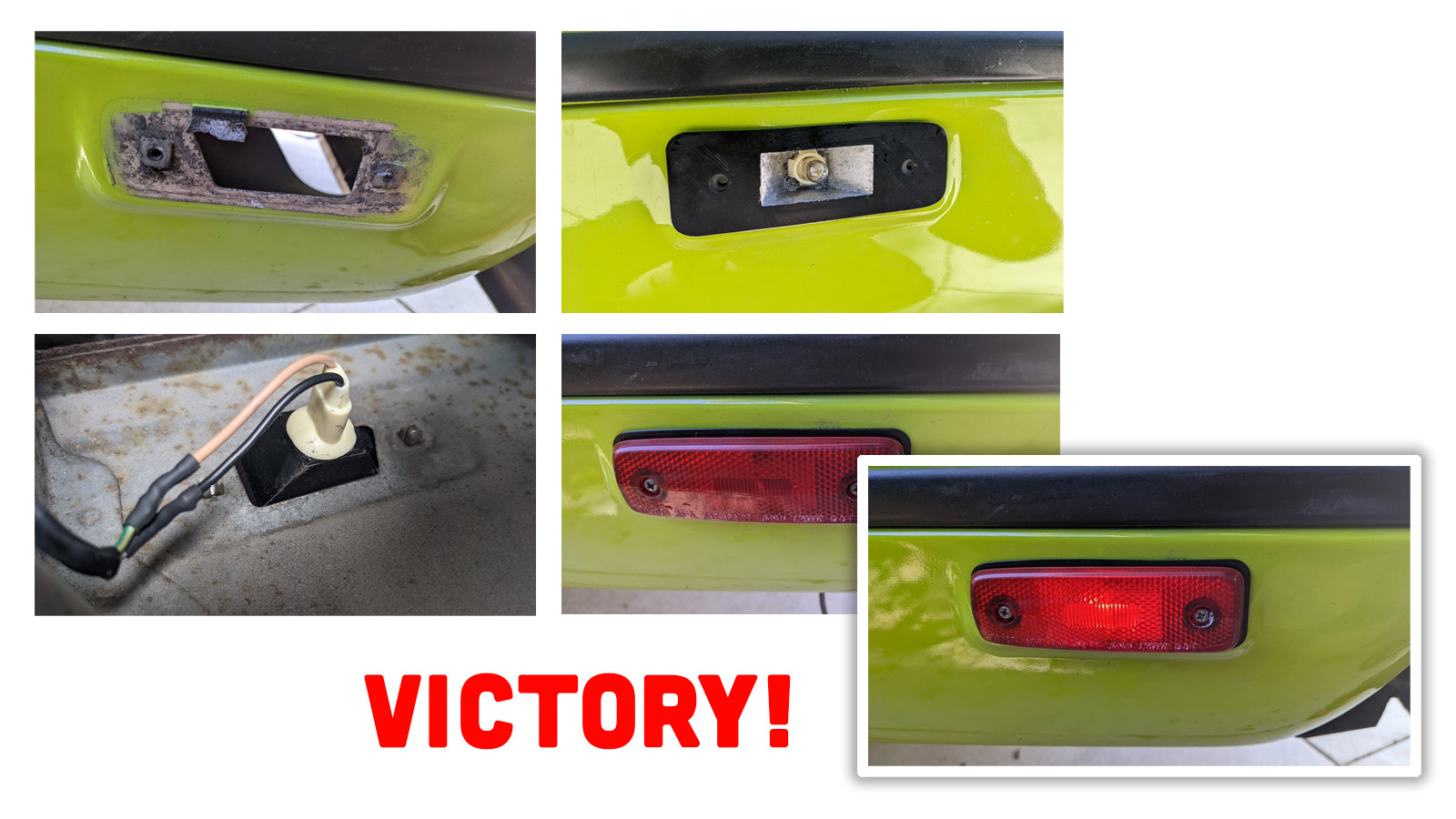 Often when I find myself trying to avoid spending money on a project, I’m trading money for time. Maybe I saved $50, but at the cost of a few wasted afternoons. This was not one of those situations. Yes, I spent more time on these lights than I would have if I had just bought them online, but it didn’t take that long. This might sound like rationalization, and maybe it kind of is, but maybe it’s not.

I spent about an hour designing the parts, and my printer did basically all the rest of the work. My materials cost was about $20 and change, which is $140 cheaper than buying new marker lights. And I had fun doing it, so I’ll call that a win.

(You can find more of Emily’s DIY projects on her Twitter!)

Read All My Posts »
PrevPreviousI Went To England And Came Back Obsessed With These Miniature Steam Engines
NextIt’s Been Six Months Of The Autopian! Let’s Talk.Next