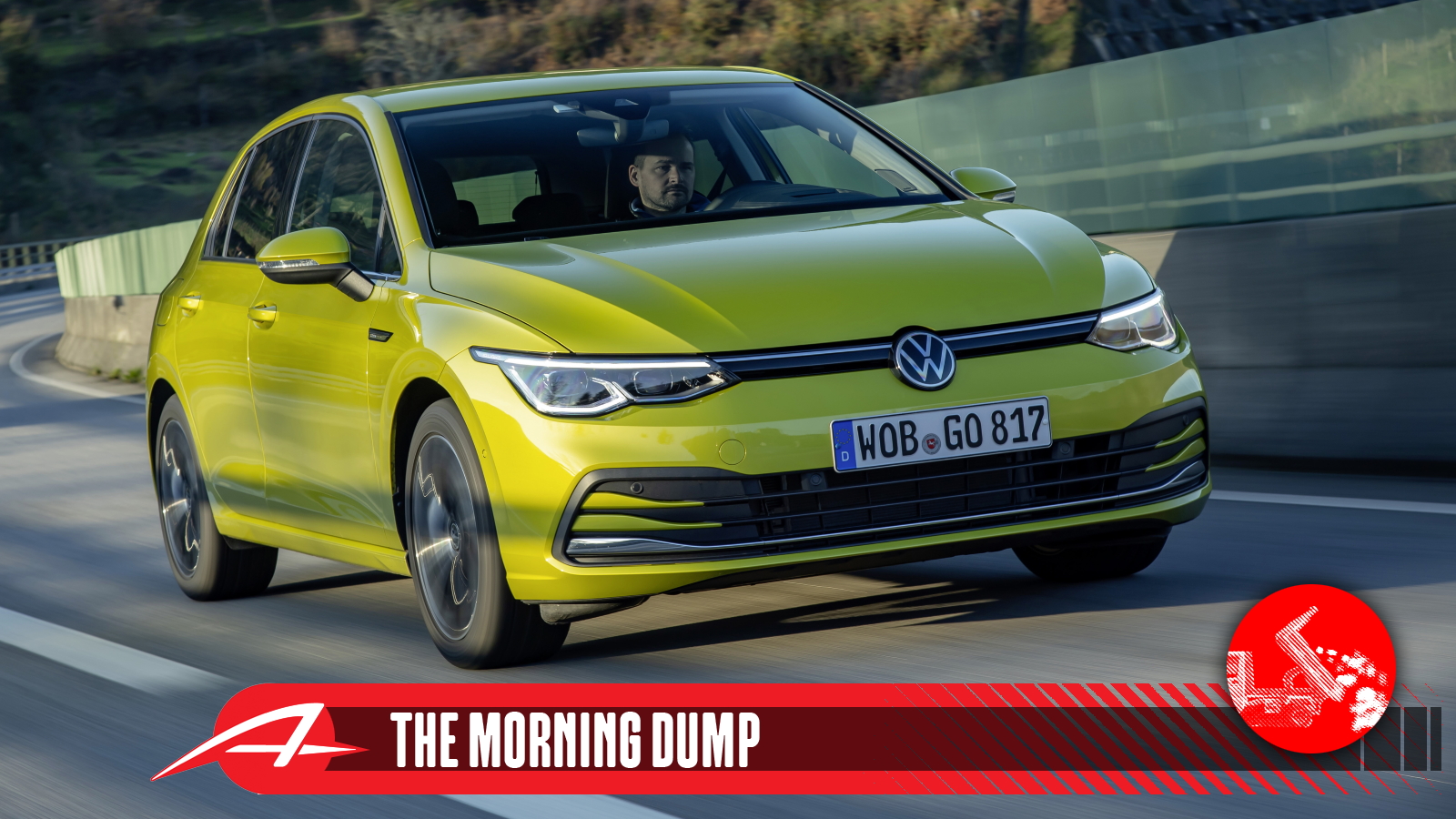 Volkswagen might not make another generation of Golf, new car demand may be falling, BMW gives hydrogen another whirl. All this and more in today’s issue of The Morning Dump.

There Might Not Be A Mark 9 Golf On The Way

The Volkswagen Golf is more than a car, it’s a standard. Just as the Golf GTI is the archetypal hot hatch, the standard Golf is often a benchmark for every compact hatchback the world over. More than 35 million Golfs have been sold since Volkswagen’s iconic hatchback entered production in 1974, or roughly one for every 1.086 people in Canada. However, the Golf’s legendary tenure may come to an end. Volkswagen boss Thomas Schäfer stated in German newspaper Welt (as noticed by Motor1) that Volkswagen’s not sure if a ninth-generation Golf will be made. Now, we’re working with Google Translate here, so bear with me. However, if you are fluent in German, I’ll drop a link to the article here.

The new head of the Volkswagen brand, Thomas Schäfer, expects vehicle prices to rise significantly as a result of the planned EU emissions directive Euro 7.

Schäfer left open whether there will be a new edition for the VW Golf, Europe’s best-selling car. Because the political course is set for electromobility and the demand for it is developing rapidly, “we will have to see whether it is worth developing a new vehicle that does not last the full seven or eight years,” he said. That is “extremely expensive”. They are currently working on an upgrade of the current Golf 8. It has not yet been decided whether a Golf 9 will come onto the market after that: “We will know more in twelve months.”

It makes sense that a ninth-generation Golf is up in the air. German production of the Mark 7 Golf ran for roughly eight years, so a mid-cycle refresh of the current Mark 8 Golf in the next year or two isn’t unprecedented. If we’re looking at an eight-year production cycle for the Mark 8 Golf, a Mark 9 would likely launch towards the end of this decade, possibly closing out new combustion car production in Europe. Plus, with the expected costs of Euro 7 compliance, it might not be a huge stretch to simply make an entry-level EV. I guess we’ll just have to hang tight and see what decision Volkswagen lands on. [Editor’s Note: I think we’re going to hear German automotive executives make these giant pronouncements to prep the market, tweak the unions, and get concessions as they head towards a terrible winter without enough gas to make cars. This could very much be real, but buckle up for a weird year. – MH]. [Another Editor’s Note: The Golf brand is too strong to ditch entirely, so despite the cryptic messaging in this news report, I wouldn’t worry about the Golf actually going away anytime soon. Then again, the Beetle is gone, so who knows what the distant future holds. -DT]

Well, it took a while, but it seems like new car demand may actually be falling. Reuters reports that several automakers including Stellantis, Volkswagen, and BMW are seeing fewer consumers hungry for new cars.

Carmakers have until now protected margins by bumping up prices, but the steep rise in inflation in North America and Europe could make it more difficult to pass on rising costs.

“Demand is coming down,” Volkswagen’s chief financial officer Arno Antlitz said last week, though he said order books were still full for the coming months. “The warning signs are for Europe and North America, less for the Chinese region.”

Reuters pins the drop in reported demand on inflation which, while fair, likely isn’t the only cause. We’re still seeing low inventory, long lead times on orders, and some equipment fluctuations that may affect new car desirability. A drop in demand is likely good news for the car market overall. If excess production capacity returns, manufacturers can slowly ramp up building of stock units, easing pain for dealers and consumers alike. In addition, Reuters reports that Ford CFO John Lawler is mulling incentives, saying “That’s a relief valve going forwards.” I don’t know about you but possible incentives sound pretty nice to me.

While battery electric vehicles seem to be the popular way forward for green cars, they do come with some limitations. Energy density is fairly low, charging takes time, and weight impacts performance. However, battery power isn’t the only way to make a car with no tailpipe emissions. Automotive News Europe reports that BMW CEO Oliver Zipse said on an earnings call that the company is considering hydrogen propulsion for its upcoming Neue Klasse platform.

The first cars on the Neue Klasse platform are due in 2025 and will initially include a sedan similar in size to the 3-Series midsize car and a “sporty SUV,” Zipse said on the call. “We could also imagine a hydrogen drivetrain for this new vehicle generation,” he added.

BMW will start limited production at the end of the year of a hydrogen fuel-cell version of the X5 large SUV, called iX5 Hydrogen. “We are already thinking about a possible next generation,” Zipse said.

This isn’t the first time BMW’s given hydrogen a shake. You might remember the Hydrogen 7 made from 2005 until 2007 that burned hydrogen in a massively detuned N73 V12 engine. It was a bit crap, but that’s how early implementations of technology usually are. Honestly, hydrogen fuel cells sound quite promising providing proper infrastructure investments are made. Hydrogen filling stations are currently far and few between, although I will admit that filling up with hydrogen seems much more appealing than waiting around at charging stations.

Lucid Appears To Be Having A Rough Time

Between component shortages and inflation, it’s been a rough year for the automotive industry. While mainstream automakers like Ford and Toyota are certainly feeling some effects, the current economic situation has really played havoc with startup automakers. Take Lucid, for example. Automotive News reports that Lucid’s expected production figures are down by half to between 6,000 and 7,000 vehicles this year, not great numbers by any means.

Lucid delivered 679 vehicles in the second quarter. First-quarter deliveries were 360. Production out of its Arizona factory for the first half of the year was 1,405, the company said in a press release.

Wow, that’s an aggressive second-half ramp-up if Lucid only built 1,405 vehicles in the first half of the year. The good news is that Lucid isn’t in huge financial peril, as the company states it has $4.6 billion in cash, cash equivalents, and investments. That should be good for a while.

Whelp, time to drop the lid on today’s edition of The Morning Dump. Happy Thursday, everyone! The weekend is just around the corner. I’d love to ask you a question: What’s the first thing you replace when you buy a car? It could be as simple as changing the oil or as much of an investment as throwing on new tires. Personally, I like to roll on tires that aren’t older than five years, have good tread, and aren’t unevenly worn. Replacement tires have been among the first things I’ve done on my past three daily drivers as those four black circles are the only things keeping a car on the road. Whatever the case, I’d love to know what your immediate go-to is after picking up a new-to-you car.

Thomas is a Nu Rave-blaring, heel-toe downshifting, maple syrup-swilling, chassis-geeking, junkyard parts-hauling, floppy-haired scenester who's been writing about cars since college. His current ride is a 2006 BMW 325i with the six-speed manual gearbox. Instagram: @thomas.hundal Twitter: @thomashundal
Read All My Posts »
PrevPreviousWhere Did They All Go? 1987 Oldsmobile Cutlass Ciera vs 1987 Ford Escort GL
NextHow Mechanics At The World’s Quirkiest Car Museum Are Preparing For The World’s Fanciest Car Show In Pebble BeachNext