Where Did They All Go? 1987 Oldsmobile Cutlass Ciera vs 1987 Ford Escort GL 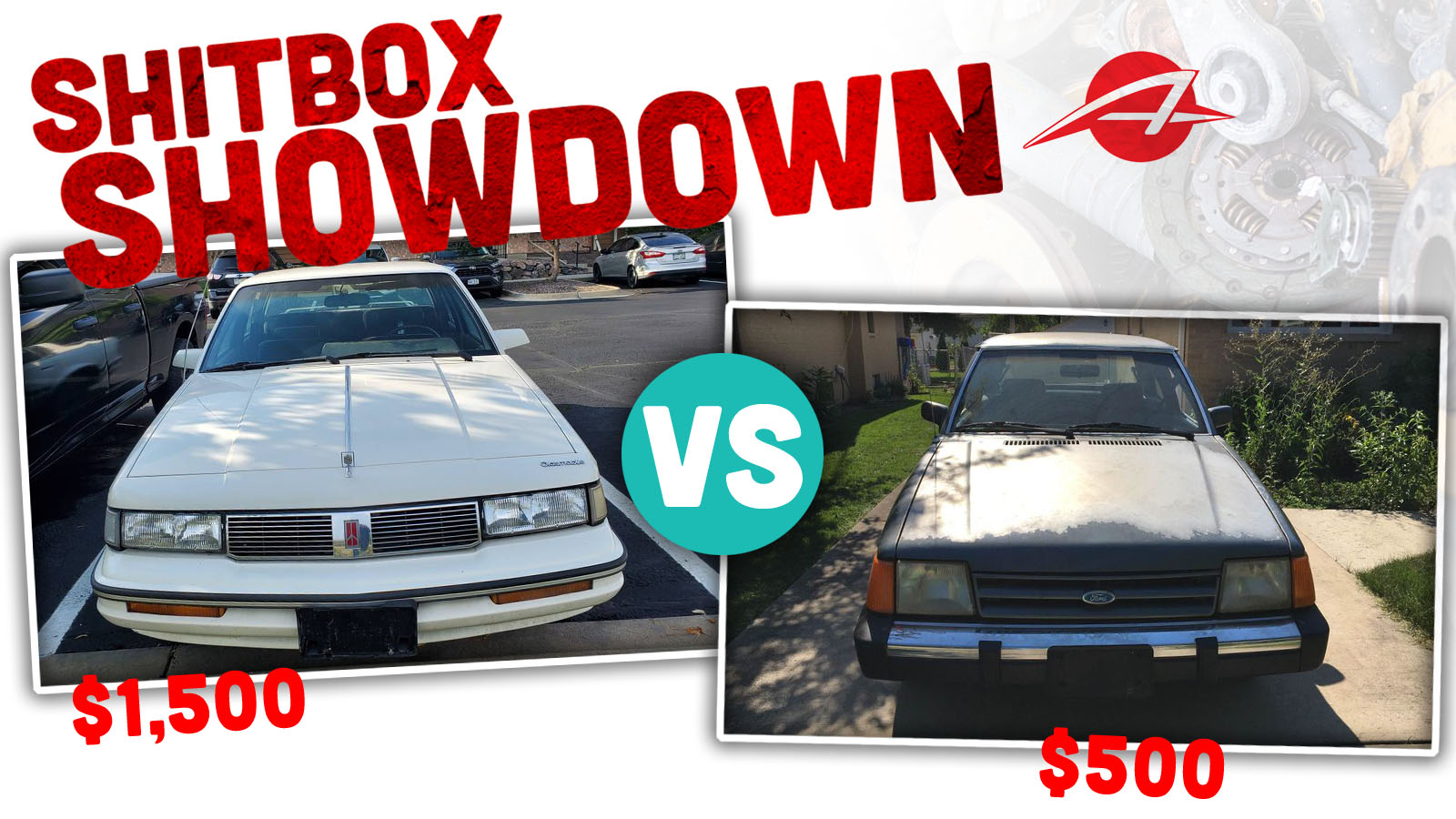 Good morning, and welcome to the Thursday edition of Shitbox Showdown! Today we’re taking a look at two cars that used to be so common that I’m willing to bet collisions between them occurred on a weekly basis, but are all but exitnct now. We’ll look at the final tally of our engine twinsies from yesterday, and then dive in.

Well, that looks pretty decisive. The GMC takes it. Must be the two-tone paint; always bet on red and black. Or something like that. I wouldn’t know; I don’t gamble much.

And yes, I may have understated the GM 2.8 V6 engine’s shortcomings. I try to keep a positive tone here, in part to counteract the “shitbox” title, but also to remind myself and everyone else what an enormous undertaking it is to bring any car to market. Someone somewhere in the halls of General Motors’s design offices in the late ’70s was really proud of that motor, and I don’t feel it’s right to be outright dismissive of it or any other automotive design. But I did appreciate the colorful invective some commenters used to express their feelings toward it (Sasha Grey? Really?).

Moving on: A week or two ago, David tipped me off to a Facebook group called Underappreciated Survivors For Sale. I’m not generally a fan of Facebook, because too often it seems like The Blob: a big mindless force bent on devouring, well, everything. But with a group title like that, I had to check it out. Many of the cars posted are grossly overpriced, and some are clearly trying to cash in on the ’80s nostalgia wave, which to me says they’re not really “underappreciated” at all.

However, I did find two humble, inexpensive, everyday cars listed there. Both fit Jason’s definition of a “Ghost Car:” if you were around in the ’80s, there was probably at least one of each on your block, but when was the last time you saw one of either? Even here in the Land That Rust Forgot, these are a rare sight. Let’s take a look and see which one is more worthy of consideration today. 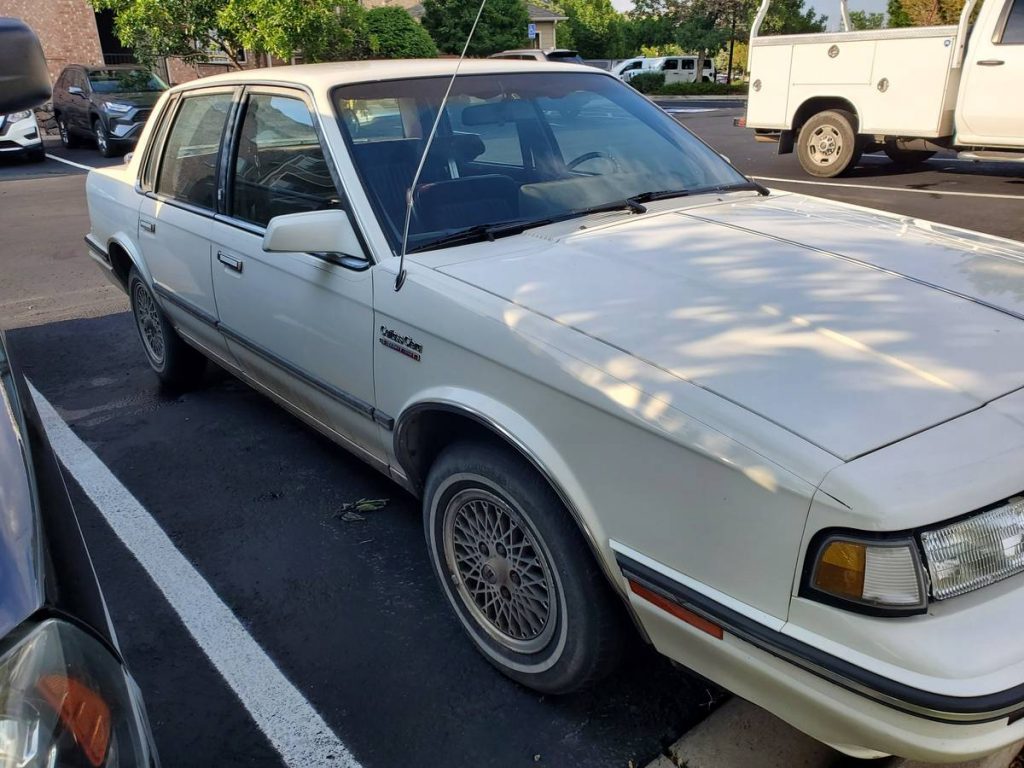 Runs/drives? Your guess is as good as mine

“1987 Cutlass Sierra (sic) for 1500/obo.” That is the entirety of the listing for this car, to save you the trouble of clicking on the link. Someone needs to tell the seller that Craigslist doesn’t charge by the word, I think. Luckily, they did post the VIN, so thanks to AutoZone’s handy VIN decoder, I was able to find out which of the several available engines powers this Ciera. I’m sorry to report that it’s another 2.8 liter V6. But at least this one is fuel-injected. Hey, it could be worse: Olds inflicted a 4.3 liter diesel V6 on some earlier Cieras. 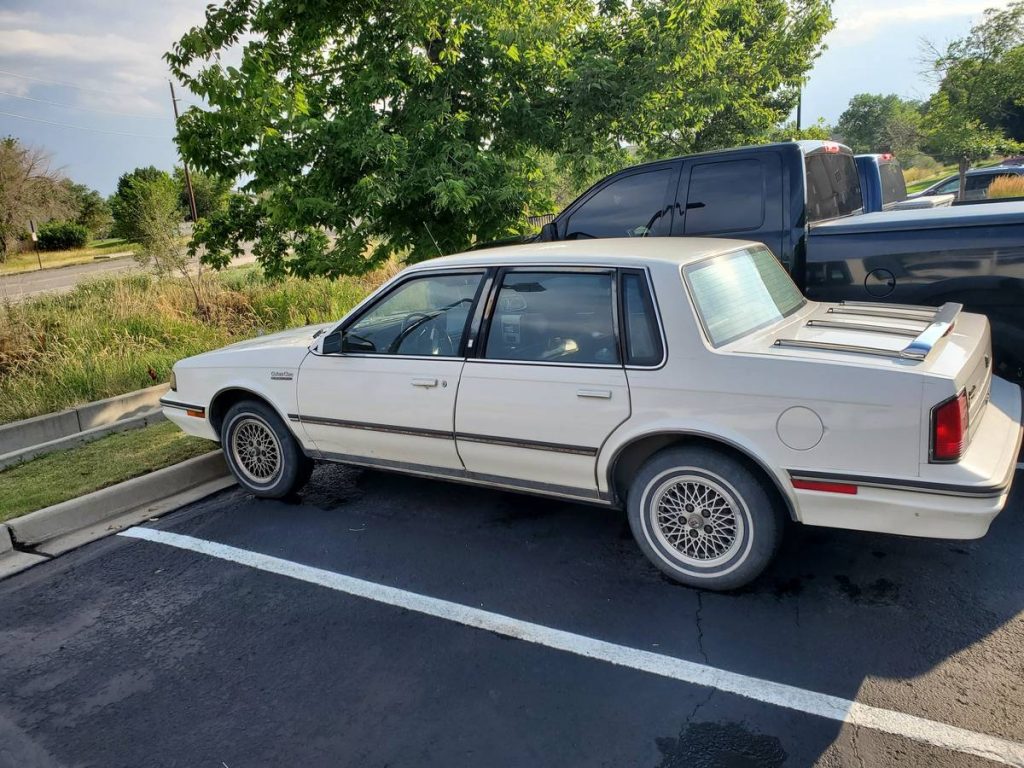 Regardless of engine, these front wheel drive A-body cars from GM have a decent reputation. They sure sold like hotcakes. You couldn’t throw a rock in the late ’80s without hitting a Cutlass Ciera, Buick Century, Chevy Celebrity, or Pontiac 6000 (Kids: Don’t throw rocks at cars). And they stuck around a long time, but the last ten years have thinned their ranks significantly, to the point where seeing one in this condition is a rarity, especially the early squared-off roofline like this. 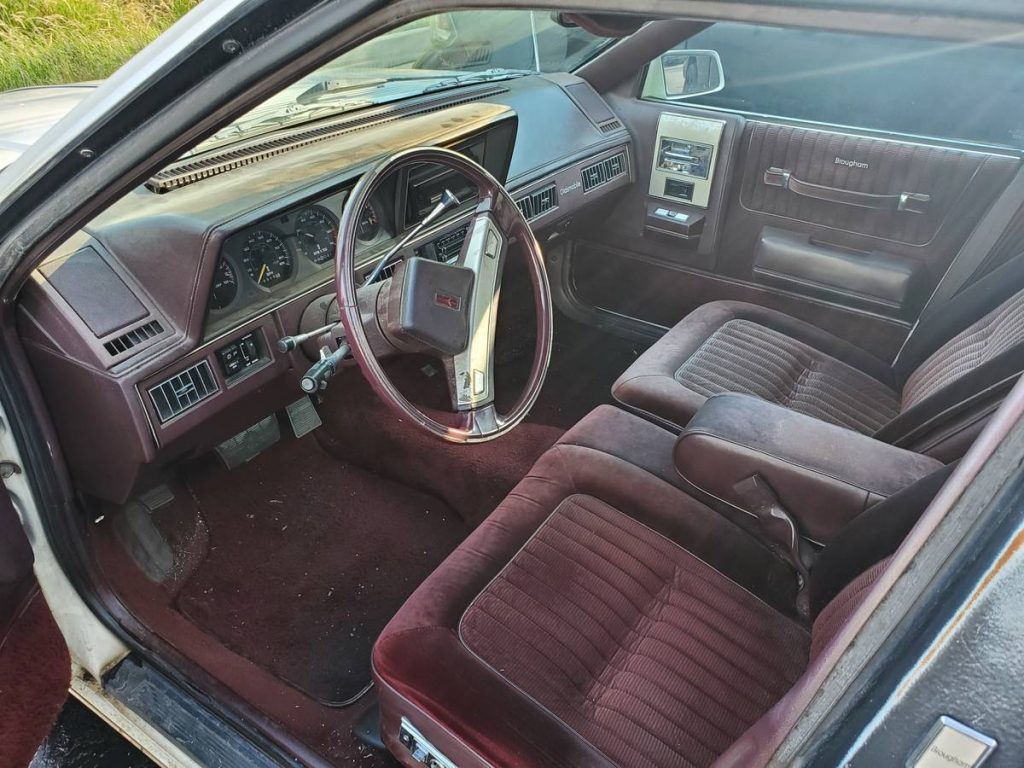 The mileage listed, and shown in the photos, is 33,315. It’s only a five-digit odometer, so there’s no way of telling whether that has gone around once already. The overall condition indicates that it could be original, but that’s a lot of wear on the brake pedal pad for only 33,000 miles. 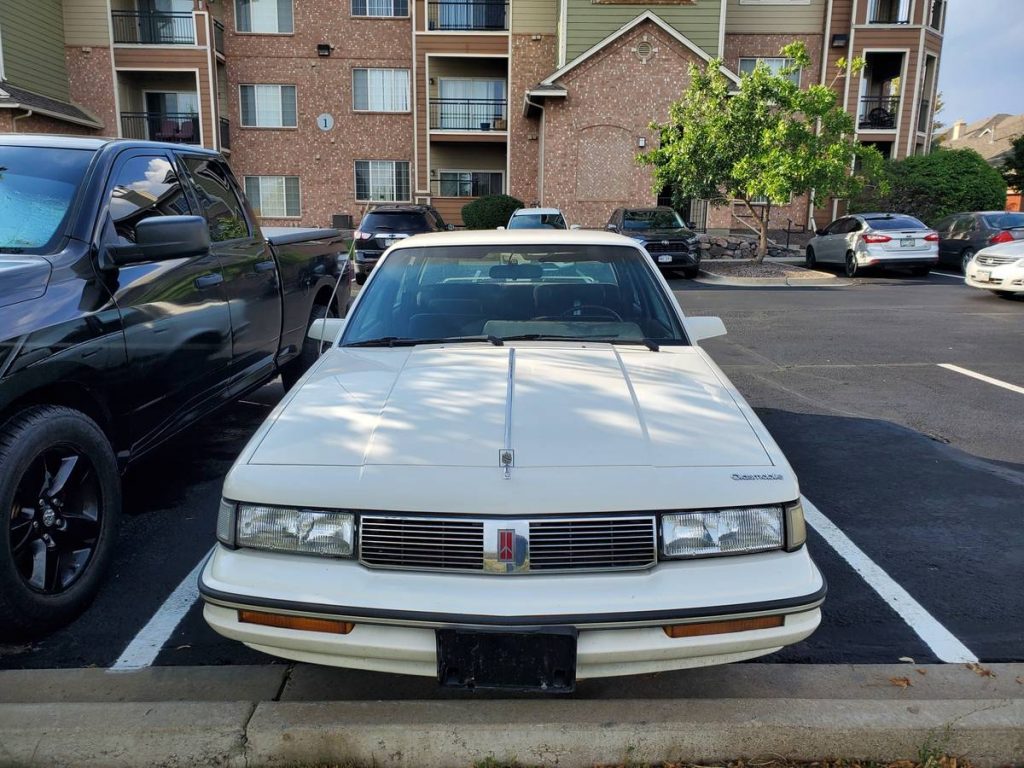 Assuming it runs and drives well, for fifteen hundred bucks, this car feels like a good deal to me. Hell, I’d drive it. It’s not stylish, or fast, but it’s comfortable, and there’s a no-bullshit earnestness to it that is lacking in today’s car market. 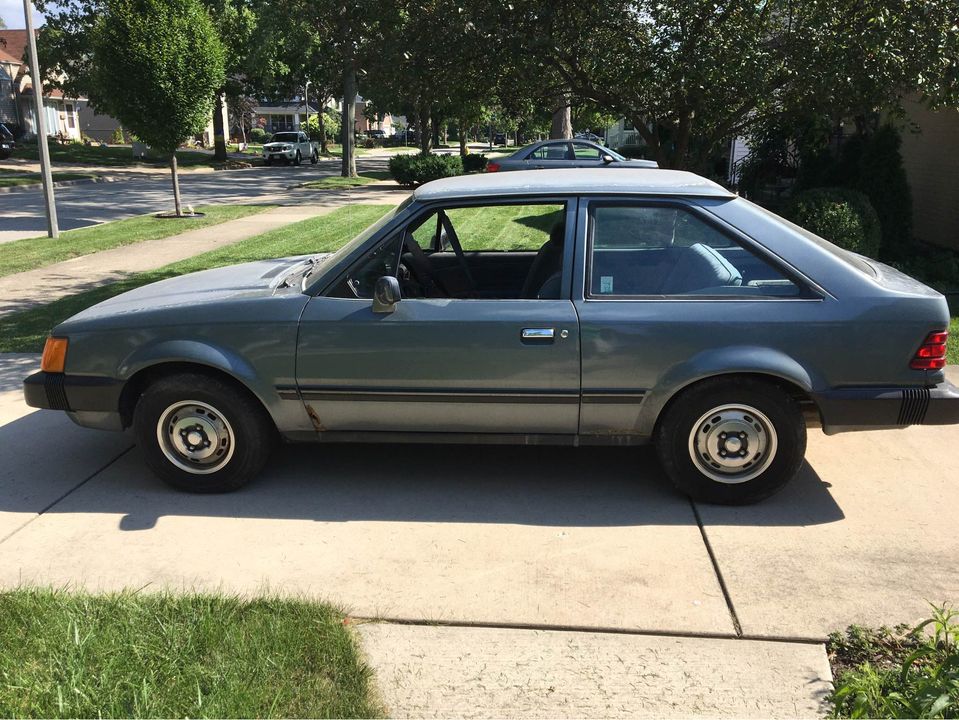 Runs/drives? Runs, but not drivable until some things are fixed

Any British car enthusiast will take one look at this car and tell you that that’s not a Ford Escort. It’s an imitation, an impostor, a pretender. Real Escorts were delightful rear-wheel-drive confections that everyone east of the Atlantic got to enjoy while we Americans lived through the Pinto years. In 1981, we got the name, engine, and basic appearance of the then-new FWD Escort, but little else. 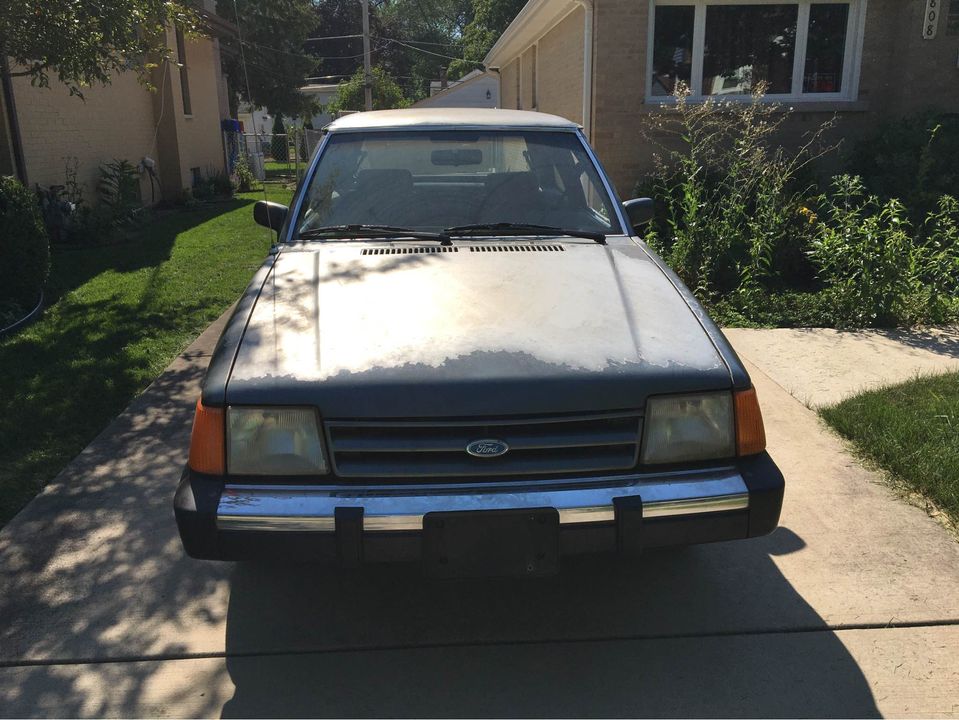 US-market Escorts may not have been the equal of their European counterparts, but they weren’t horrible little cars. And like the Oldsmobile, they were absolutely everywhere. I knew half a dozen people in high school who drove an Escort, and at least as many in college. They were cheap, economical, reasonably well put-together, and practical. Every Escort of this generation was either a hatchback or a wagon, and either shape would swallow more cargo than you’d guess. 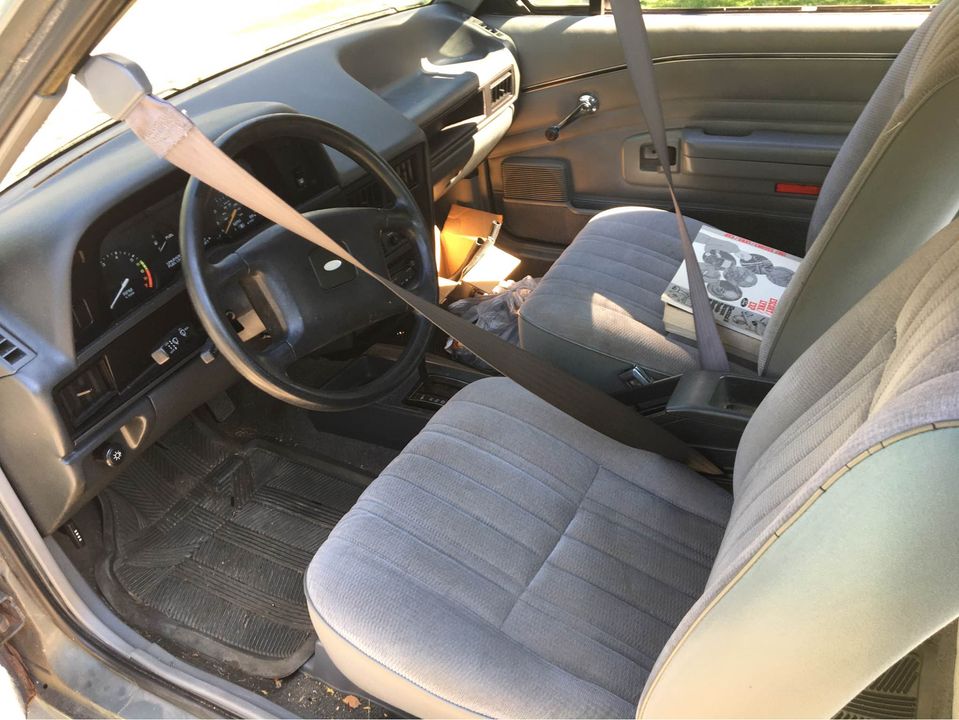 This slightly later Escort is a double-edged sword, equipment-wise: it has the throttle-body fuel injected version of Ford’s CVH four-cylinder engine – giving it way better starting and drivability than the earlier carbureted version – but it’s also new enough to have those annoying motorized seat belts. It’s the better-looking two door body style, but it’s an automatic. Compromises must be made, I suppose, at this price point. 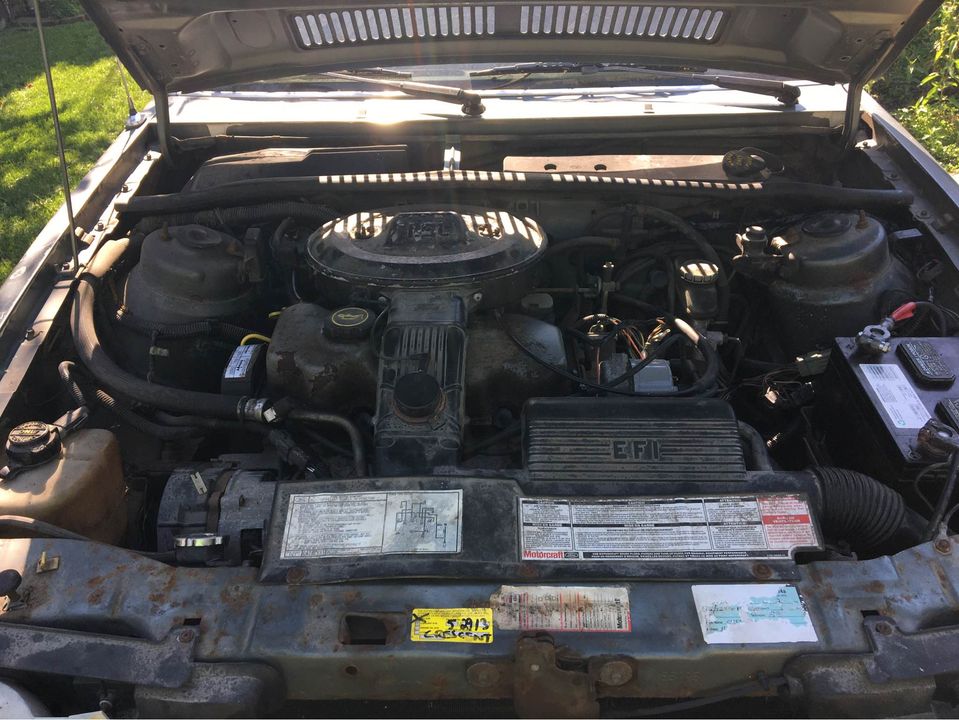 The seller has tuned this little engine up, and it runs well, but the car has rusty brake lines that need replacing, and an inoperative cooling fan that will have to be sorted out. But the rest of it doesn’t look too rusty other than a hole at the bottom of one door, and they’re only asking $500 for it as it sits, so a little time and money getting it roadworthy again might be well-spent.

Survivors? Looks like. Under-appreciated? Well, I guess that depends on how much appreciation you think they deserve. I tend to be pretty sympathetic to old ordinary cars like these, and I like to see them out and about. Which one is more deserving of your appreciation is up to you to decide.

Pacific Northwest-based self-taught DIYer of all the things. Current fleet: 1971 MGB GT, 1989 Chevy K1500, 2013 Chrysler 300C, 2003 Infiniti QX4, and 1966 Aristocrat Land Commander trailer. Not to mention about 40 RC cars and around 100 model kits...
Read All My Posts »
PrevPreviousCold Start: So Many Lights
NextVolkswagen Might Kill The Ninth-Generation GolfNext