Packing a 1.6-liter turbocharged V6 that screams to 11,000 rpm and a litany of electric motors, it’s a given that AMG’s F1-inspired hypercar is astonishingly quick. Indeed, on Oct. 28, the Mercedes-AMG One set a production car Nürburgring Nordschleife lap record of 6:35.183. That’s an average speed of 117.9 mph (189.8 km/h), yet somehow the speed isn’t the craziest part of the lap.

The really crazy part is that the track conditions sucked. Not only was the tarmac damp in many spots, there was dirt on the track in spots like Kesselchen, and Mercedes-AMG claims in a press release that the session was shortened due to weather delays. Apparently, by the time the track had somewhat dried out, Mercedes-AMG only had time for four fast laps. These aren’t the ideal conditions you’d want to set a lap record in, yet here we are.

At first, it didn’t look like a new record. The weather was sunny with a light wind, but the track was – typical of the Nürburgring in autumn – still damp and partly dirty in some areas. In some sections, such as the fast “Kesselchen” section, the ideal line had not yet completely dried. All in all, they were not ideal conditions – especially for a vehicle in this extreme performance class. By the time the track was passable for a first fast lap, the remaining time had whittled down to less than an hour. With air and asphalt temperatures of just under 20 degrees Celsius, this was only enough for a maximum of four fast laps.

Mercedes-AMG brought two ONEs to the Ring, which meant that the limited time could be used effectively. According to the specifications of Nürburgring 1927 GmbH & Co. KG, both vehicles were inspected and documented by TÜV Rheinland to ensure that they were in series production. A notary confirmed the proper condition of the vehicles and the correct execution of the record runs. 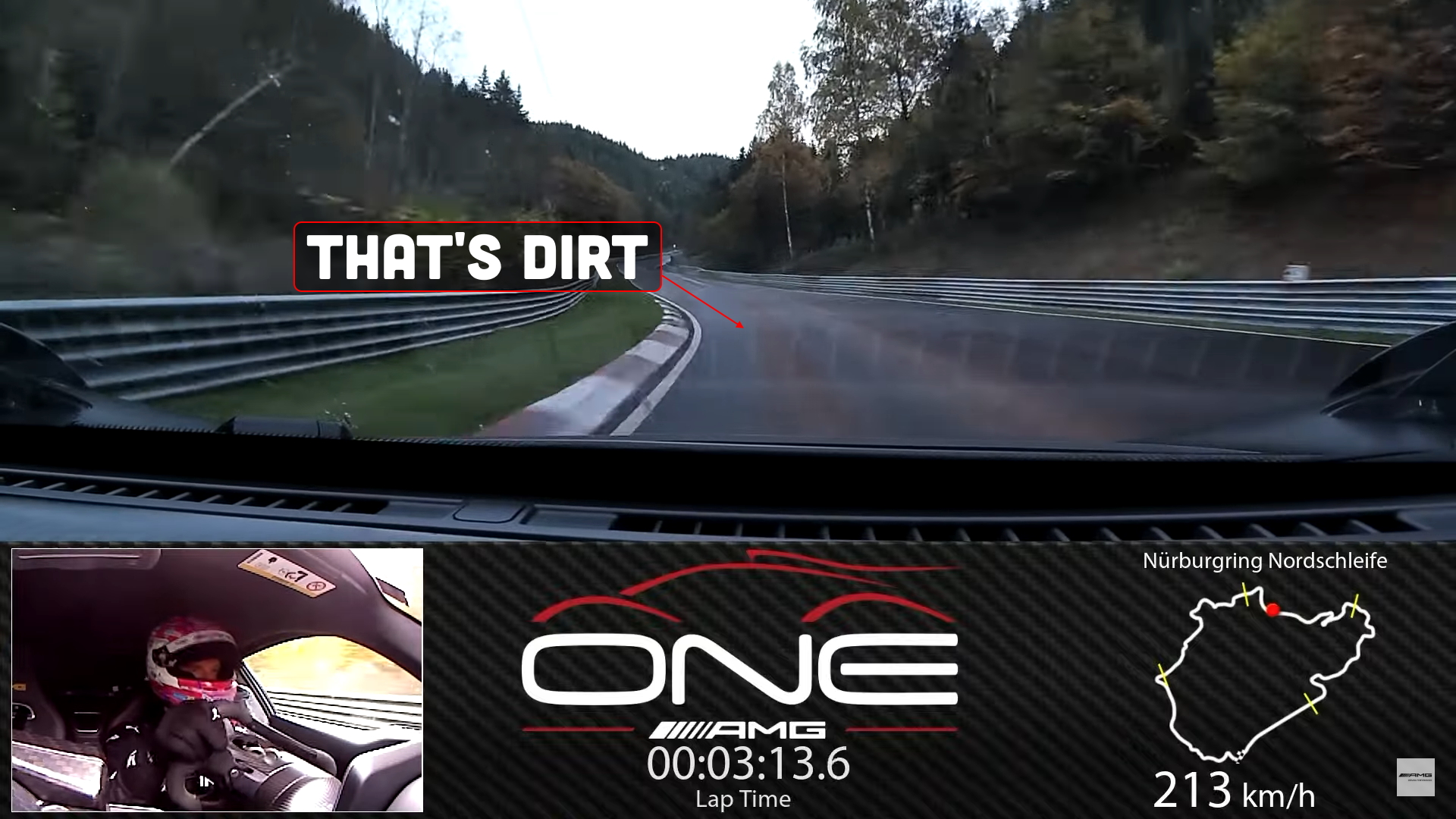 For context, the next-quickest street-legal production car around the Nordschleife is the 991.2 Porsche 911 GT2 RS with the factory-approved Manthey Racing package. It ran a 6:43.3 under much better conditions than the Mercedes-AMG One lap, and is seriously impressive for something that isn’t a hypercar. Beyond that, the Mercedes-AMG GT Black Series clocked a 6:43.616, while the current Porsche 911 GT3 RS managed a 6:48.047.

To help achieve this time, Mercedes-AMG dropped the one into Race Plus mode, which drops the suspension by 30 mm up front and 37 mm out back, sets each motor to full attack mode, and alters the active aerodynamics. In addition, driver Maro Engel made good use of the One’s DRS system, which drops the upper rear wing element and retracts flaps in the fenders to cut drag. 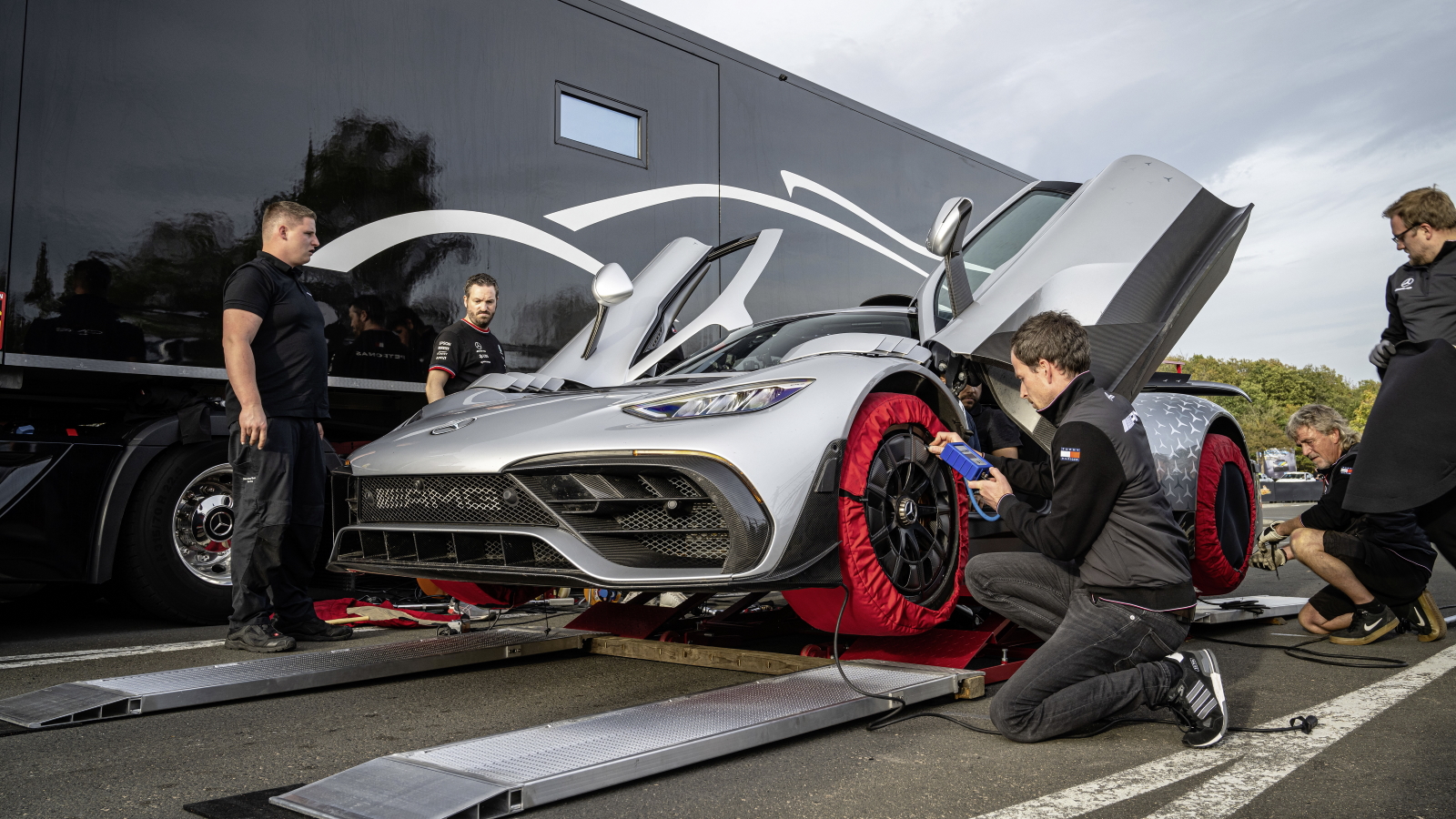 While the record seems all well and good, I have to take a little umbrage with the press release. In giant header font, Mercedes-AMG proclaims to be the “First car manufacturer with a hypercar on the ring.” Ah. How do you define what a hypercar is? One could argue that although not road-legal, the Pagani Zonda R is a hypercar and it set a blistering 6:47.50 time back in 2010, handily the quickest track-only production car on the board at the time. [Editor’s Note: It’s possible that there’s an official definition for the Nürburgring “super sports car” category (as Mercedes calls it in the press release) that we aren’t aware of. -DT]

If we go by the fine print, the press release states that “Mercedes-AMG is the first car manufacturer to have ventured onto the Nürburgring Nordschleife with such a hypercar and set official records there.” Hmm. One could say the Porsche 918 Spyder is a hypercar that was the quickest production car around the Nordschleife in 2013 (two Radical cars were faster, but since they only met UK Single Vehicle Approval, they weren’t street legal).

It seems Mercedes may be fluffing up a lap record, which the company doesn’t need to do given the genuinely appalling conditions at the track. It’s an impressive time! (But we get it; if it’s not a record, it won’t make the news). 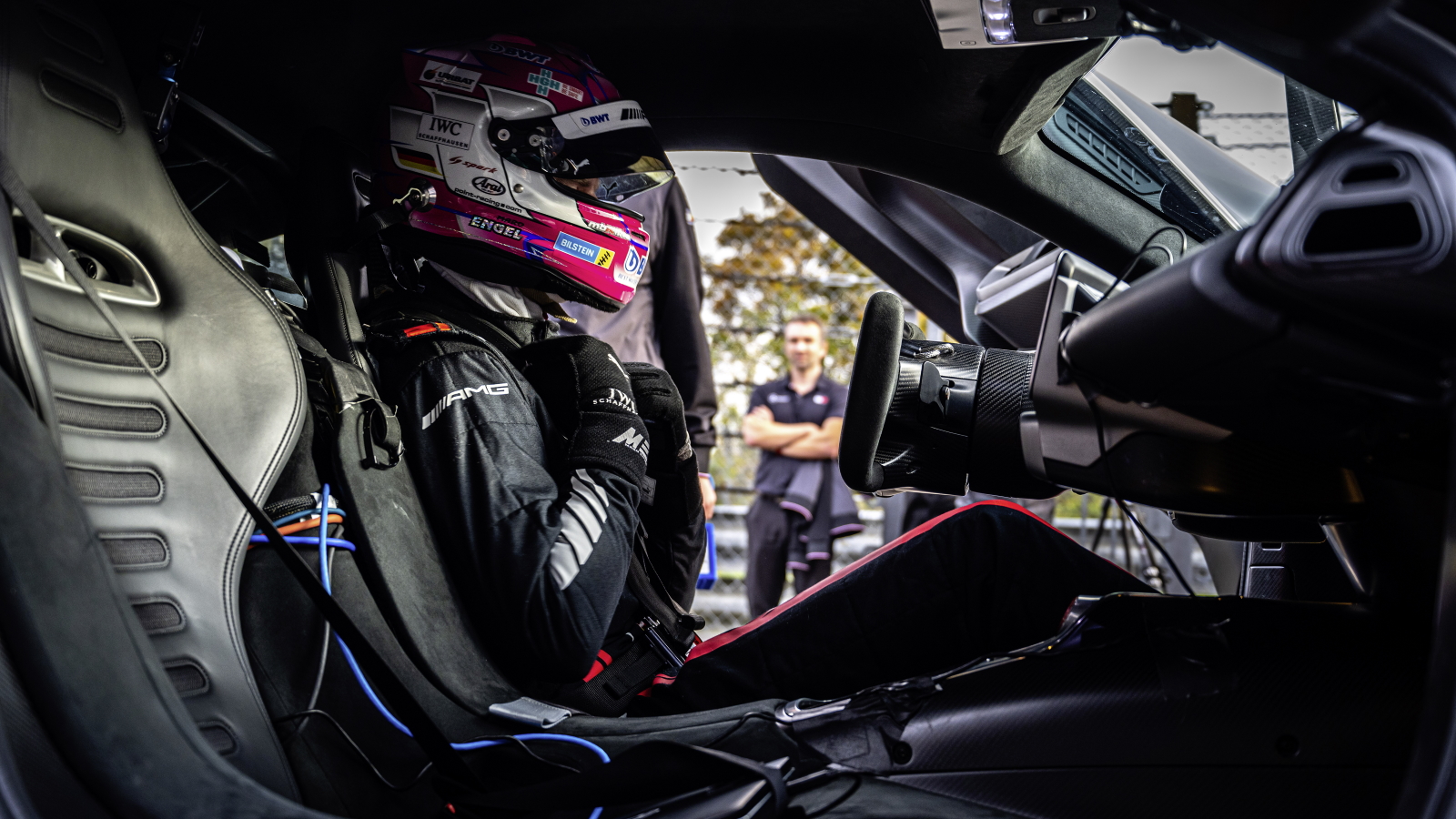 The big question now is how much faster can the Mercedes-AMG One go under ideal conditions? Dry track, no debris, cool air, tarmac warm enough for grip. Well, I wouldn’t be surprised if a time of 6:30 or less is achievable. Five seconds is a lot of time to shave off, but over a 12.944-mile (20.832 km) track, it may very well be possible. If achieved, expect average lap speed to be around 2 mph higher.

So, well done to Mercedes-AMG. I look forward to other hypercar marques taking up the gauntlet and laying down times of their own. Perhaps Rimac can snag the electric production car lap record, or Aston Martin can have a go in the Valkyrie. Perhaps another fresh hypercar on the ring is exactly the excuse Mercedes-AMG needs to go out again in the One and smash that 6:35.183 time.

Thomas is a Nu Rave-blaring, heel-toe downshifting, maple syrup-swilling, chassis-geeking, junkyard parts-hauling, floppy-haired scenester who's been writing about cars since college. His current ride is a 2006 BMW 325i with the six-speed manual gearbox. Instagram: @thomas.hundal Twitter: @thomashundal
Read All My Posts »
PrevPreviousKawasaki Is Electrifying Its Motorcycles, And One Of Them Is A Wild Parallel Hybrid
NextBimota’s New Café Racer Has A Design That Will Break Your Brain With Every AngleNext