Like many of you, I fought my way through David Tracy’s most recent recounting of his elaborate self-flagellation via decomposed Valiant Ute in the wilds of Australia with the usual combination of fascination and, well, horror. I scrolled through the pictures of David doing fat rails of rust off a kangaroo’s surprisingly muscular and well-furred ass, watched him fight off spiders the size of café tables, and noted with concern as David hacked through acres of jagged, rusty metal, surrounded by helpful Aussies who I dearly hope chose to be there, showered in sparks as they grind away at that zombified Valiant. One of those pictures, though, stayed my gaze like a plastic bag of sausage gravy flung at the side of an Econoline: a well-patina’d light blue Volkswagen Beetle, grotesquely widened to about 150% of its normal width. What the hell is going on here? I have to explore this a bit more.

In case you missed it, this was the picture shown in David’s story, taken at a Dubbo Cars and Coffee meetup: 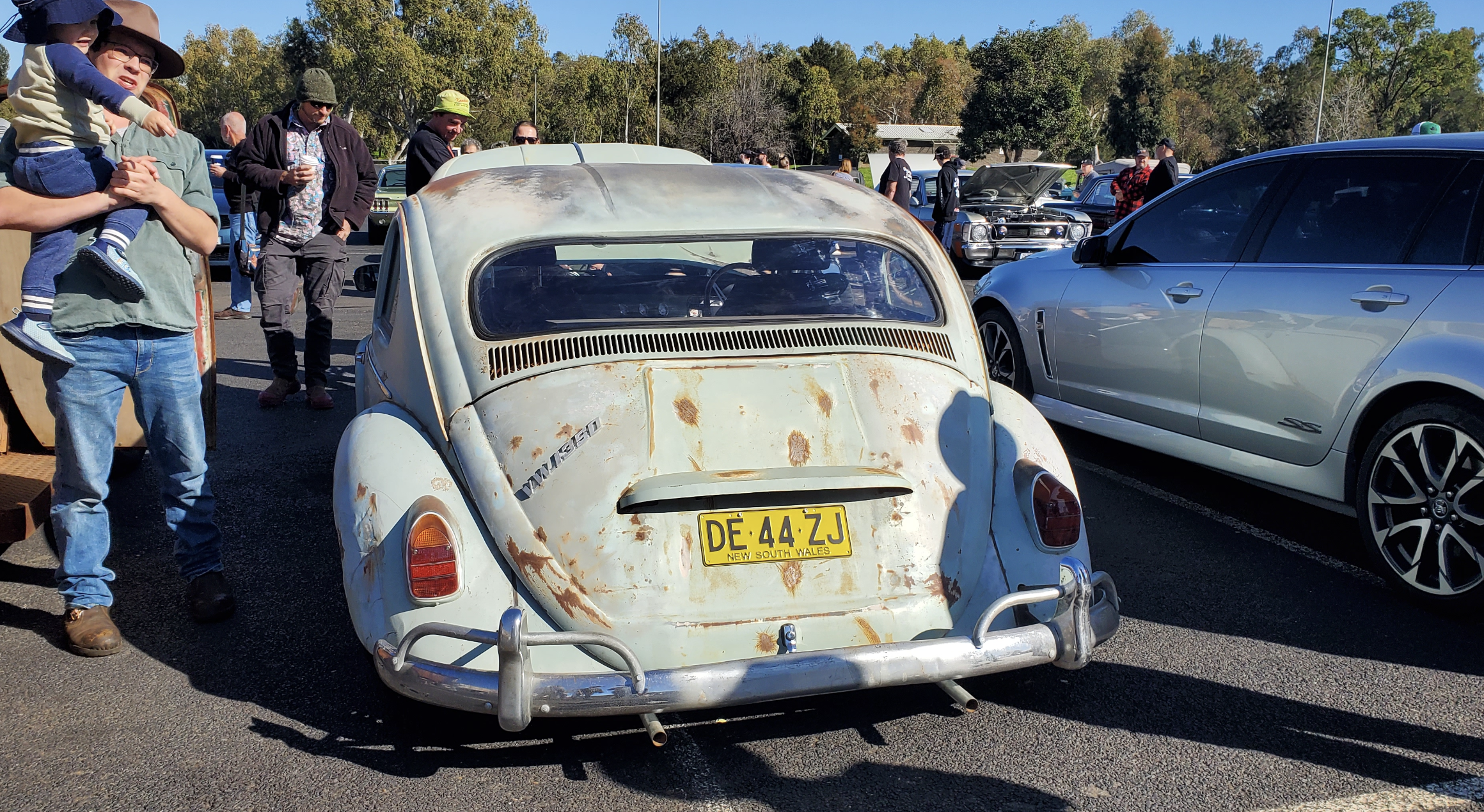 Go ahead and take a moment to wipe whatever beverage was in your mouth off your screen, where it landed after being projected out of your shocked, puckered mouth as a massive cloud of mist from your spit-take. Everything about this image just causes more questions to be asked: Why? What? How? Can it hurt me? Can it love me? What’s under there?

Relax, relax, we’re going to try to figure out as much as we can. Now, I could have asked David to ask his new Aussie friends to find out who the owner was and get a full set of details about the build, and hell, maybe an interview, but that would mean waiting, and I want to write about this bonkers Beetle now. [Editor’s Note: Editorial standards fly out the window when it comes to Torch and Volkswagens and/or taillights. -DT]

I’ll ask David to do that anyway, I guess, but in the meantime I see no reason why we can’t scrutinize and speculate, right? So, with that in mind, let’s take a look at the front of this thing, grabbed from a video that we’ll have for you soon: 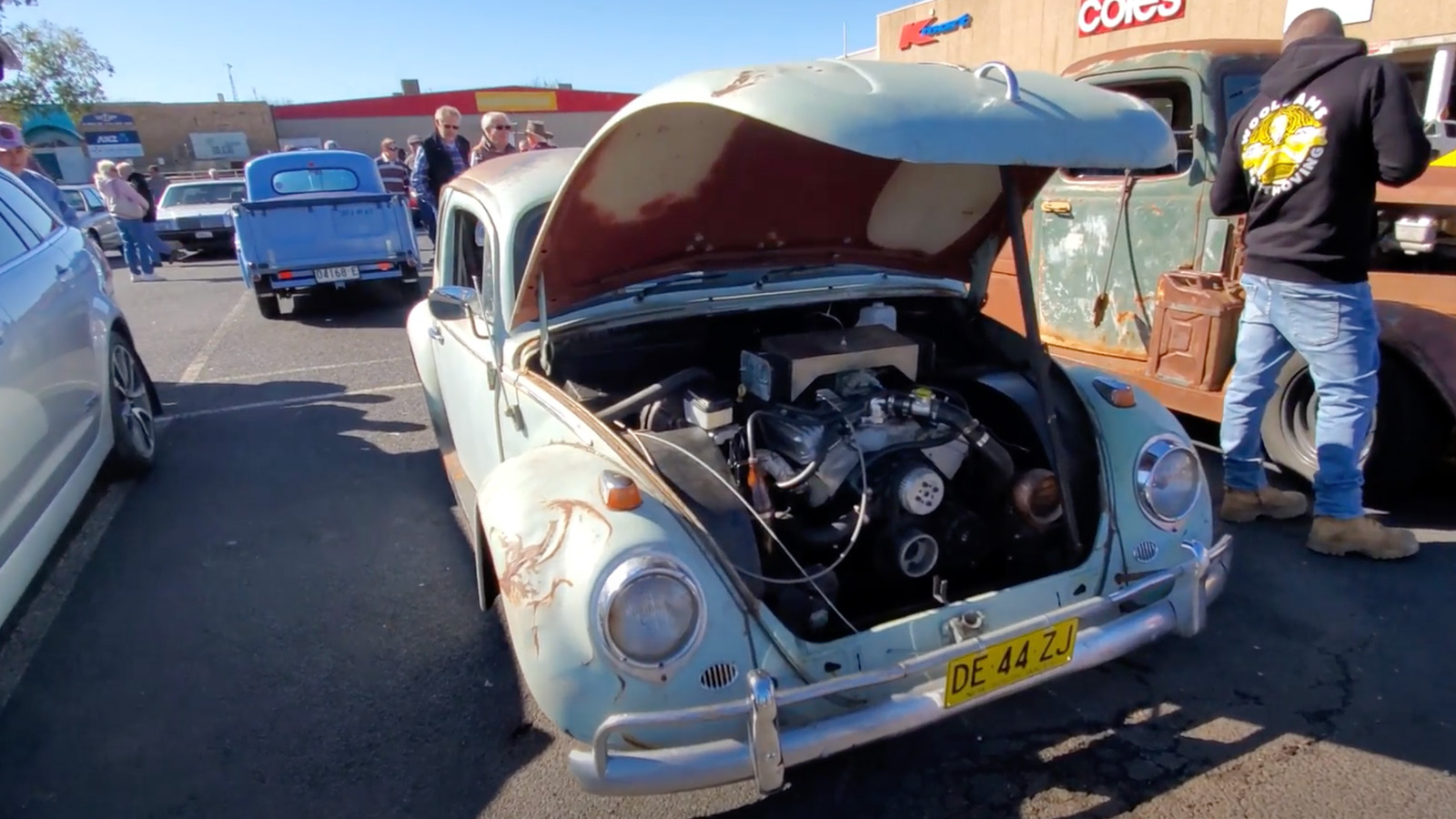 Wow. Okay, let’s break down what we can tell from these photos. First, that donor Beetle body (I assume the original VW pan wasn’t widened, and that this body was modified to fit over some other chassis, but with a build as gloriously weird as this, who knows? Maybe there’s a foot-wide center tunnel inside there) looks to be likely between a ’64 and ’66. I’m leaning to ’66, for reasons I’ll get to in a moment.

The engine in there took a bit of work to identify, but I’m pretty sure it’s a Holden V8, probably a 253/4.2-liter one. There are some significant questions to be answered about this engine, and a lot of other interesting details to discuss: 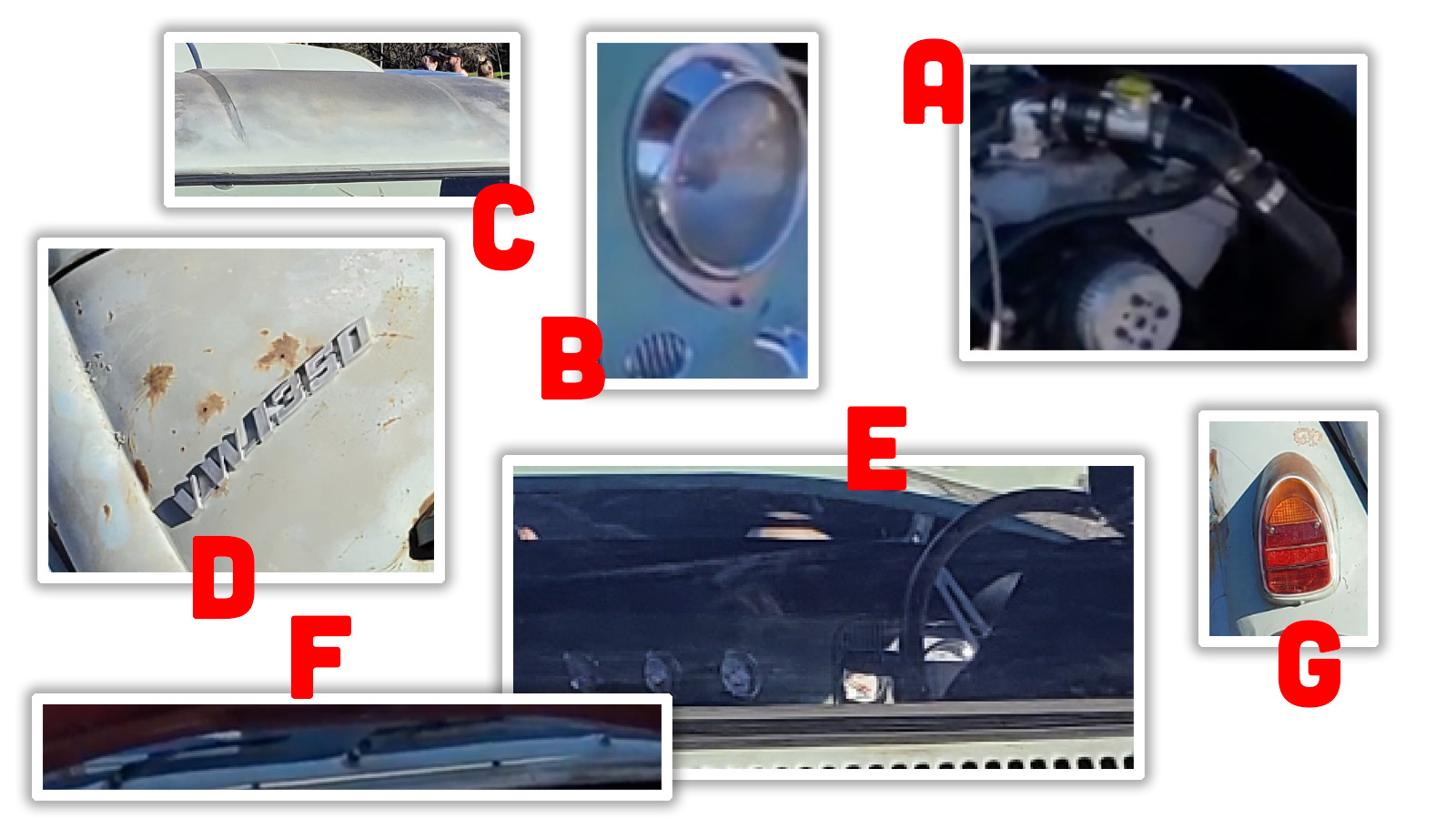 Okay, let’s work through these:

A. This coolant hose sparks one of the big mysteries of the wide-ass Beetle: Where’s the radiator? That hose seems to be turned 180° from the usual Holden V8 setups, and seems to snake rearwards, so the radiator must be either in the passenger compartment or maybe in the rear, in the former engine compartment, where it could grab air the way Beetles always did, via the vents under the rear window. I kinda doubt that’d be enough airflow to cool a huge V8, though. Maybe some sort of underbody scoop, and the rear vents are for air exhaust? And, speaking of exhaust, can this engine really be using the two tiny VW pea-shooter exhaust pipes seen in the rear picture?

A’. As I mentioned the rear window before, it occurred to me: How the hell did the builder make that widened rear window? It’s curved! The front windshield is almost a flat glass piece, so that seems easier, but that rear window has to be non-trivial. 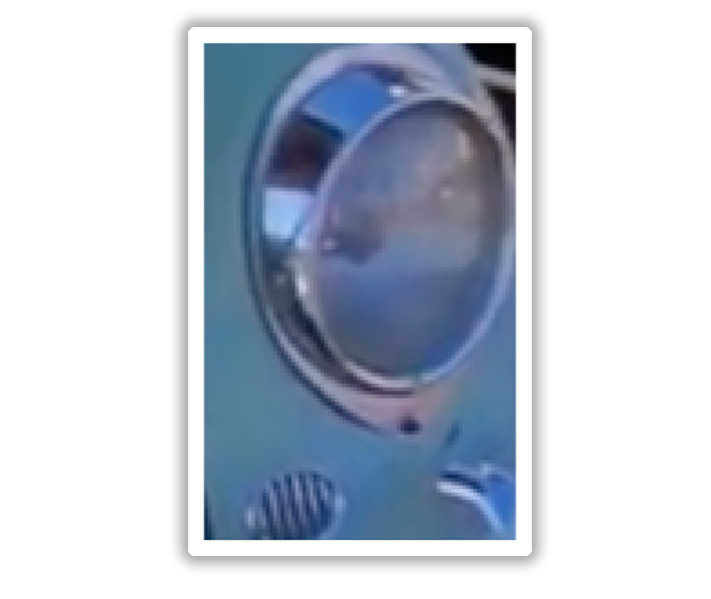 B. The headlights are strange because it’s clear that these fenders once held the old classic double-glass sloping VW headlights used from 1938 to 1966, but the builder here has made some sort of adapter panel to fit the simpler, later ’67 (U.S. market at least) and up simple round sealed beam/chrome ring setup. Why? Maybe cost? 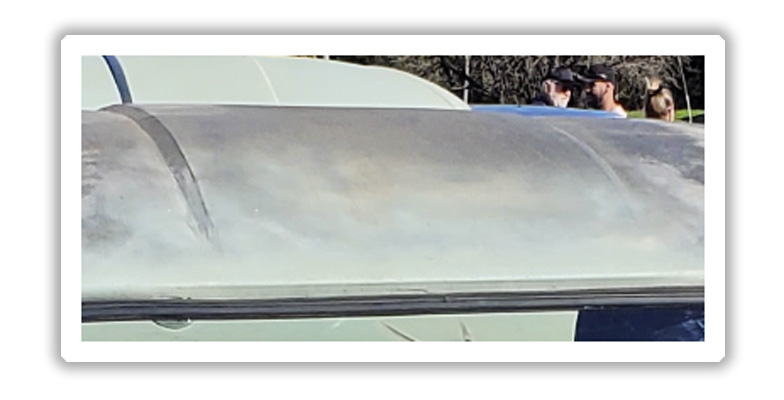 C. This flat area on the roof gives a good idea of just how much this thing has been widened, and it looks to be well over a foot! I’d guess like 16 to 18 inches. That’s a lot. 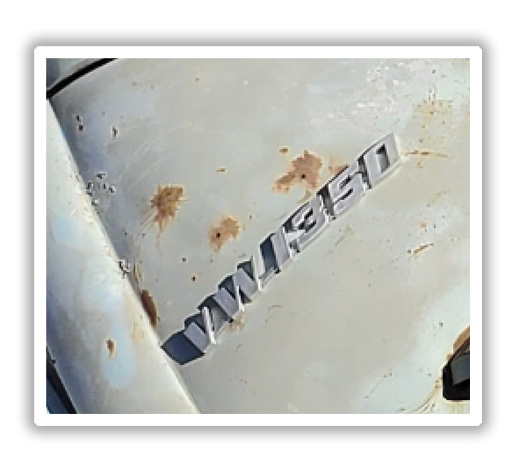 D. This badge on the very widened decklid is interesting, because it reads “VW 1350.” I don’t think VW ever officially had a VW 1350 badge. A ’66 Beetle had a VW 1300 badge, and some later Beetles had a VW 1500 badge, which are the ones I think this one was cobbled together from. Again, though, we have the question of why. The V8 in there is way bigger than 1350cc, and I doubt it makes 1,350 horsepower, though it may well feel like it does. So what does this mean? 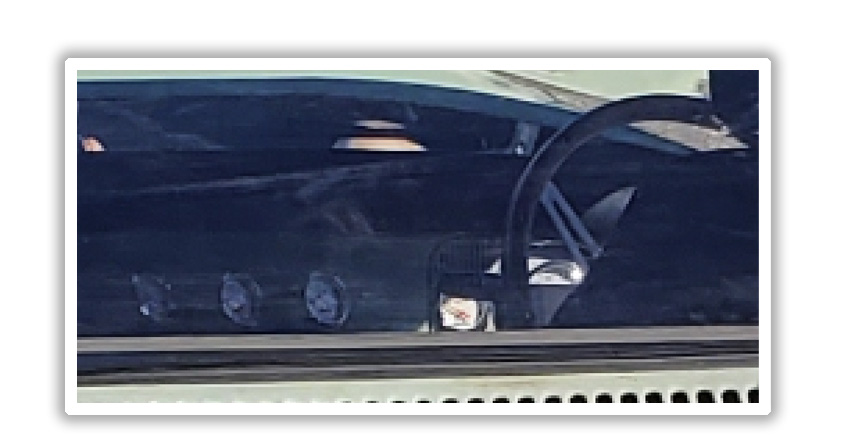 E. Look at the dash: I can clearly see the stock old VW dash setup with speaker grille panels flanking a central gauge. So, whomever did this took the effort to keep a stock-looking VW instrument panel. I also see at least three additional round gauges in the center, too, but I’m impressed how much old-school VW was kept in the interior. 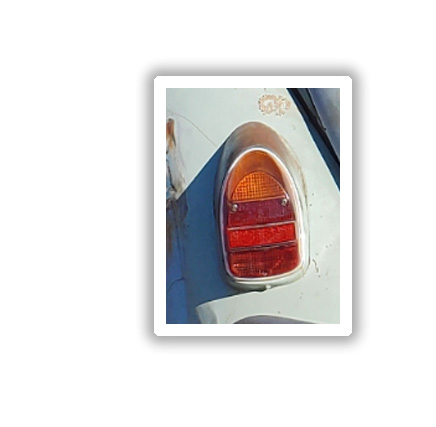 G. These taillights are from a ’68-’70 Beetle. They’re also a type we never got in America, the small tombstone style with amber indicators and no reverse lamp. So, almost all of the lighting is newer than the rest of the body. Another why?

Then there’s the more visceral questions: what is this thing like to drive? What does it sound like? How does the owner fight off the swarms of sexually aroused people who must swarm this thing every time it parks somewhere?

We’ll find out more about this fantastic monster. Until then, let’s just revel in the madness and the mystery.

I'm a co-founder of the Autopian, the site you're on RIGHT NOW! I'm here to talk to you about taillights until you cry and beg me to stop, which I absolutely will not. Sorry. Hug? Also, David's friend.
Read All My Posts »
PrevPreviousHere’s A Look Inside The World’s Quirkiest Car Museum’s Cabinet Of Bizarre Keys
NextStarring Jaguar The Car: Cold StartNext