We Rebuild Excitement: 1954 Pontiac Chieftain vs 1989 Trans Am GTA

Welcome to another edition of Shitbox Showdown! It’s Wednesday, “hump day” if you’re into that sort of thing, and we’re going to take a look at a couple of cars from General Motors’s former performance-car division: Pontiac. First, let’s find out what the final tally on yesterday’s Plymouths was:

That’s what I thought. Despite having a catchy jingle (thanks to Autopian reader Beasy Mist for the reminder), [Editor’s Note: Holy crap is that a cocaine factory they shot this in? – JT] the Duster just didn’t have what it took to overcome that Valiant. But really, if you’re going to have an automatic, it should have a cool way to select gears, and they don’t get much cooler than push-buttons.

Today, we don’t have any push-button shifters, but we do have lots of buttons on a steering wheel. And a straight-eight. And crates of records that may or may not be playable still.

Back in the 1980s, Pontiac had a mighty catchy jingle of their own. (If you’re at work, turn the volume up good and loud for this one, and make ’em wonder.) I suppose we have John DeLorean to thank for all this Pontiac Excitement; it was largely his influence, including the GTO – his middle finger to the GM brass back in 1964 – that gave Pontiac their reputation as GM’s bad boys. And Pontiac did have some barn-burners over the years, not to mention the tiny wedge of wonderful that was the Fiero.

So let’s take a look at a pair of Pontiacs now: one from well before the “We Build Excitement” era, and one from smack-dab in the middle of it. 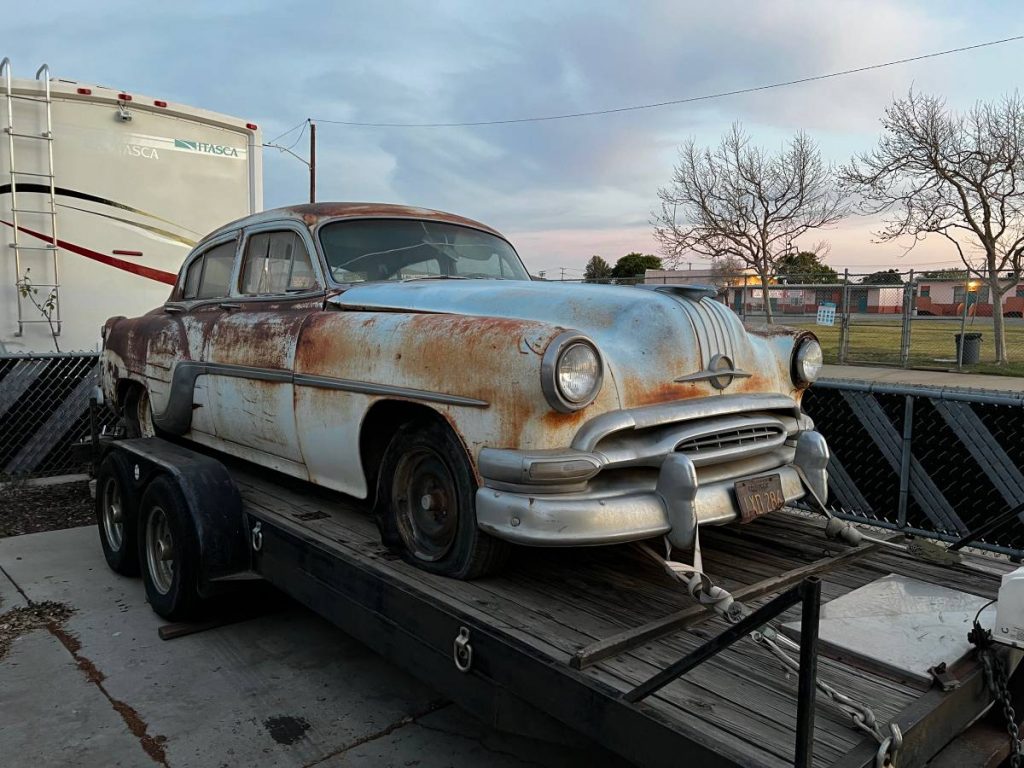 Runs/drives? Probably not in decades

“A Car For Every Purse And Purpose” was GM’s slogan under former boss Alfred P. Sloan. A rigid hierarchy between the divisions put Pontiac a notch above Chevrolet and a notch below Oldsmobile. As a result, this 1954 Pontiac Chieftain still used the same old flathead inline eight that had been used since the 1930s, because Buick, a couple of rungs up the ladder, wanted to debut their overhead-valve V8 first. 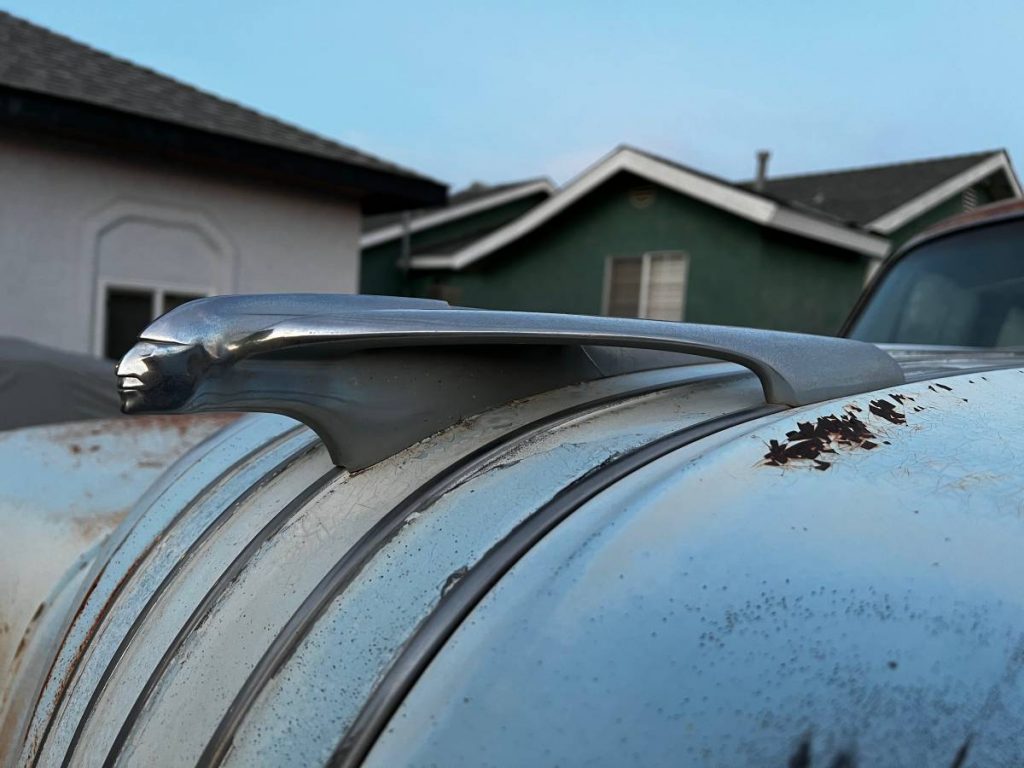 This Pontiac was also built just before a huge turning point in automotive styling kicked off in 1955. Longer, lower, wider cars were on the horizon, Jet Age styling cues like tailfins and turbines came into vogue, and overhead-valve V8s finally swept away the last remnants of the flathead era. By contrast, this tall, rounded 1954 model looks almost Art Deco. Look at that glorious hood ornament above. It’s facing forward, but gazing into a past that was rapidly disappearing. 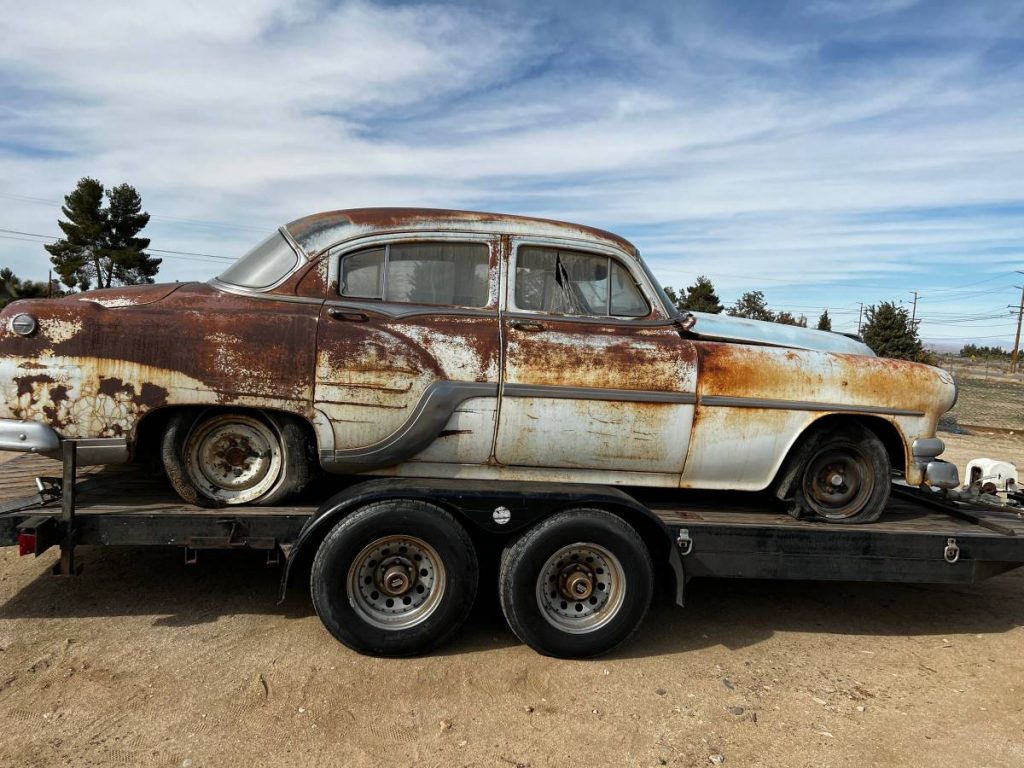 This car is being sold in as-found condition, after having sat neglected for who knows how many years. It’s almost completely intact, but rough. The interior looks surprisingly nice, and may have already had some work done to it, but outside, and we have to assume mechanically, it’s quite the project. 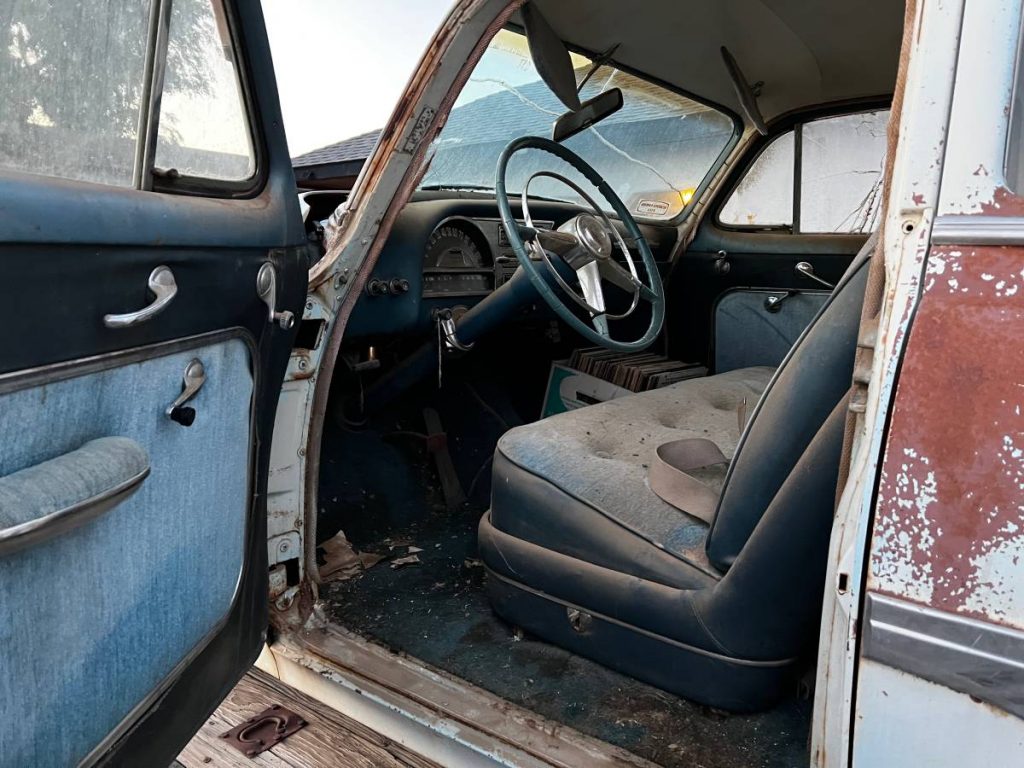 There are also a couple crates of what look like LP records in it. No word on whether they come with the car, but you could probably get the seller to leave them in there. The music hound in me is dying to know what those records are, and whether years sitting in a closed car has left any of them playable. Gotta have something to listen to while you wrench on it, after all. 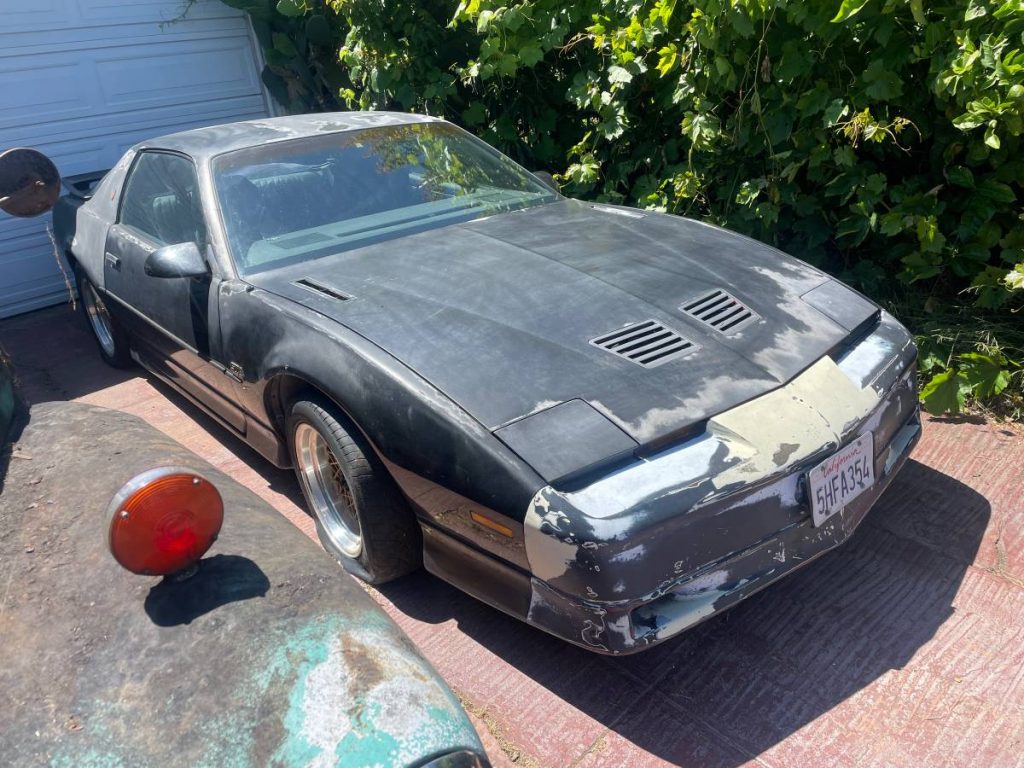 Odometer reading: ad says “777333,” which sounds like a placeholder, so we’ll say unknown

Thirty-five years later, Pontiac was second fiddle to no one. The GTO had come and gone, but the Firebird was going strong, and the Trans Am GTA was the top of the line. Or nearly; the Turbo Trans Am of 1989 was faster and quicker than this V8 version, but also a lot rarer. 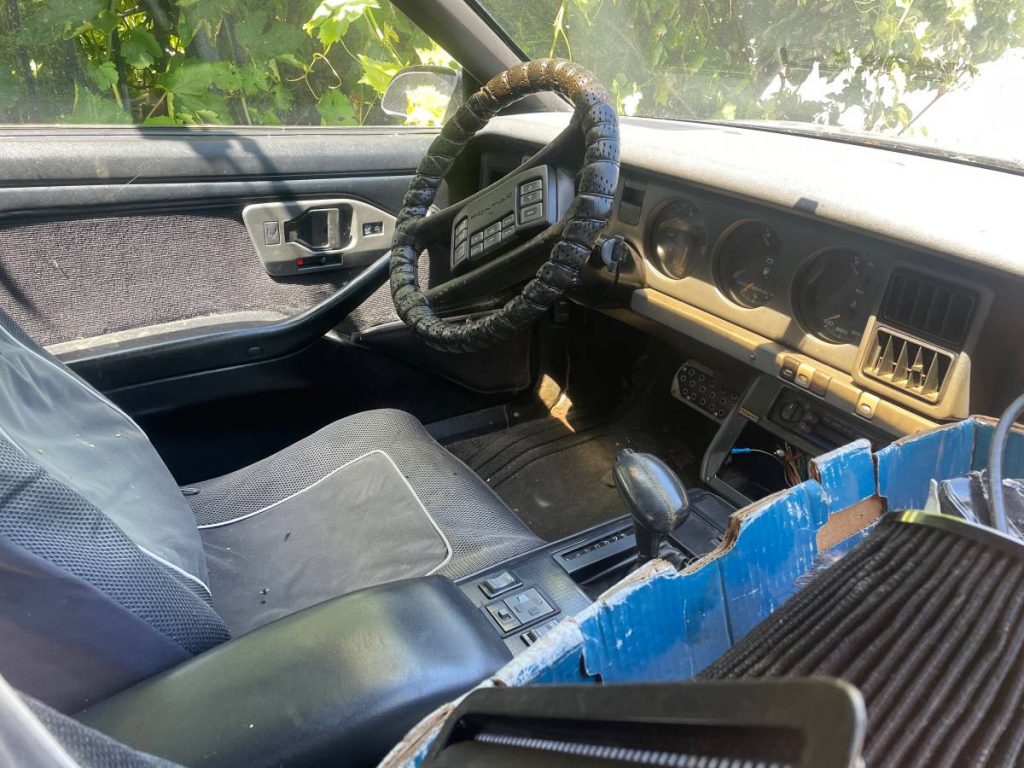 But that was a long time ago, and like a lot of us, this GTA is not what it was back in 1989. Its paint is shot, its engine is in pieces, and the whole car is covered in a layer of dust and neglect. Not a very dignified state for a car that once prowled the streets fearlessly, glossy black paint gleaming, 350 V8 engine making a menacing rumble. 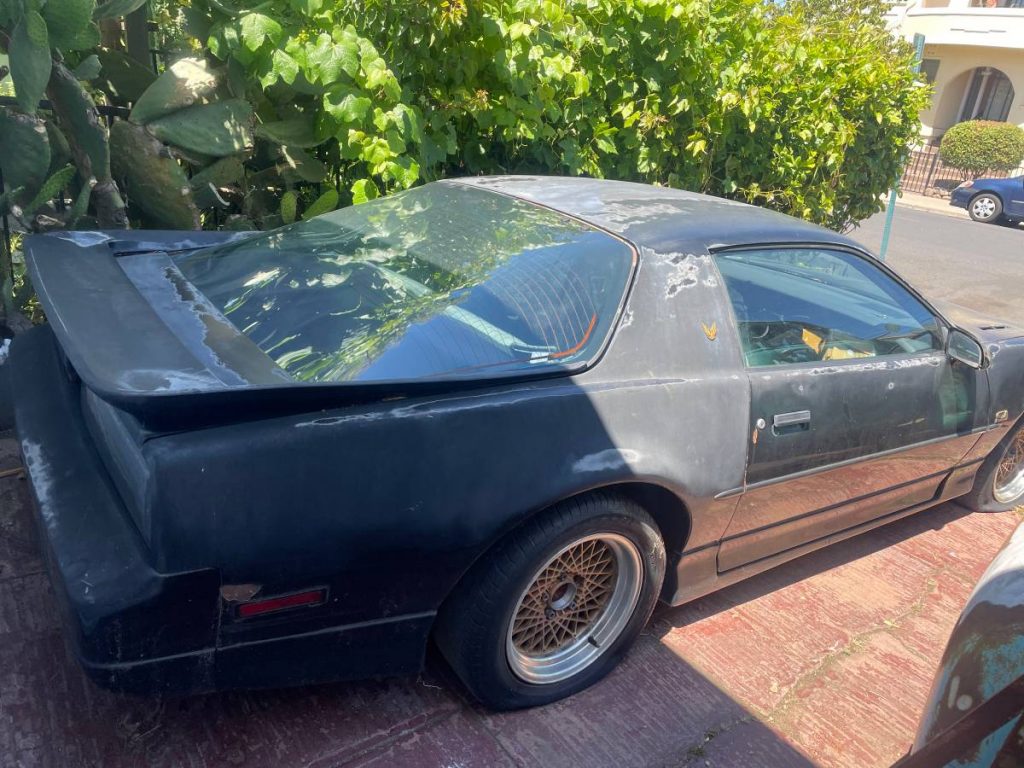 The seller makes no bones about the car’s condition, saying that “it’s going to be tough” to bring it back. From the looks of it, they’re not kidding, but it does look doable. If you’re not a stickler for originality, engines and engine parts are easy to come by, and the bodywork looks straight under all that fried paint. It does have a salvage title from a long-ago accident; it shouldn’t matter much on a car this age, but you should make sure your insurance agent agrees. 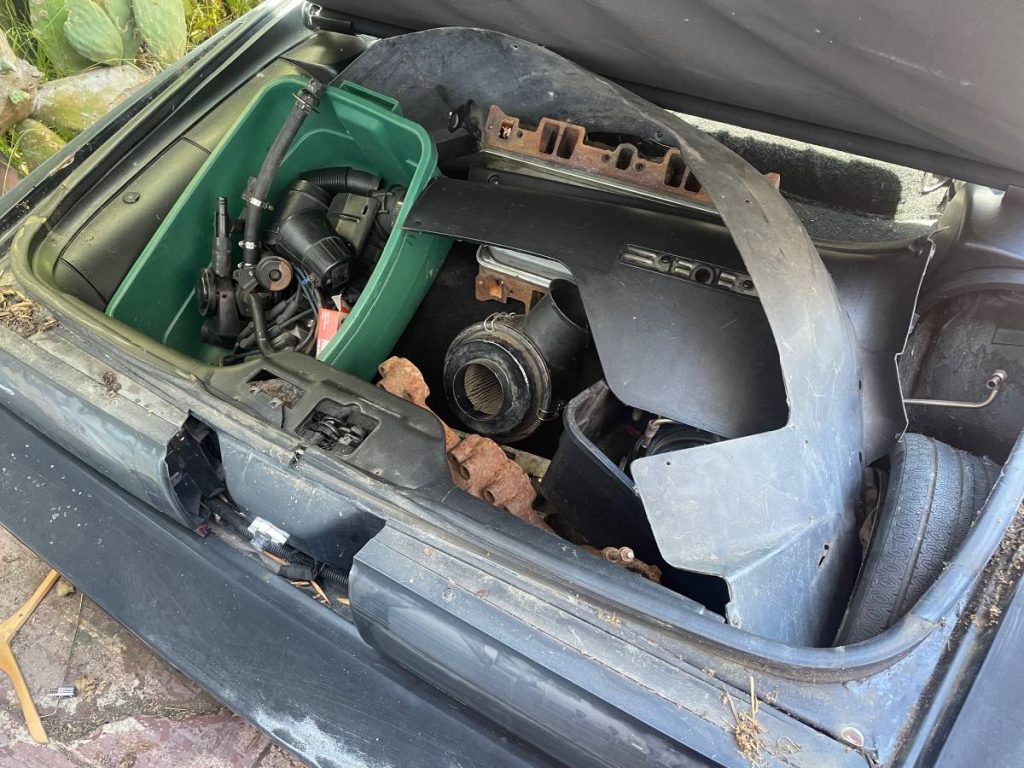 But whenever you’re talking about a car with major components of its engine removed and sitting in the trunk, you’re into serious wrenching territory. Some of us enjoy that, though, and I for one would have a ball putting this car back together. And it would be magical to take that first drive after it’s done.

So that’s where we’ll leave it for Pontiac. You’ve got a choice to make: Fifties style, or Eighties performance? They’re both a ton of work, but either one could be very rewarding.

Pacific Northwest-based self-taught DIYer of all the things. Current fleet: 1971 MGB GT, 1989 Chevy K1500, 2013 Chrysler 300C, 2003 Infiniti QX4, and 1966 Aristocrat Land Commander trailer. Not to mention about 40 RC cars and around 100 model kits...
Read All My Posts »
PrevPreviousCold Start: Big Fan
NextHere’s How People Hacked Their Way Around The Paywall The Last Time BMW Made A Basic Feature A Subscription ServiceNext