Good morning! It’s time once again to look at some crappy old cars. On our second day of dead nameplates, it’s Mopar or no car as we look at a couple of Plymouths for Two-Door Tuesday. But before we get into that, let’s see how our Oldsmobiles did:

The big, impractical, inefficient old tank beat out the modern, sensible minivan. Works for me. We’ll leave the Silhouette to gangsters-turned-movie-producers and head down the road in the old Toronado. My world makes sense again.

Okay. Now it’s time to turn our attention to Chrysler, or whatever their married name is now. (That company has gotten hitched more times than Liz Taylor’s Airstream, I swear.) In 1928, Chrysler Corporation launched a low-priced brand meant to compete with Ford and Chevrolet for frugal car buyers. For nearly three-quarters of a century, that brand, Plymouth, stood for sensible, no-nonsense, sturdy cars that were a good value. And occasional bouts of utter madness like the Barracuda and the Prowler.

Today, we’re going to look at two similar but very different cars from two profitable eras of Plymouth’s long existence. Both are two doors, both are entry-level compacts, and both, completely coincidentally, are light blue. And one is exactly twice the price of the other. Is it worth twice as much? Let’s see. 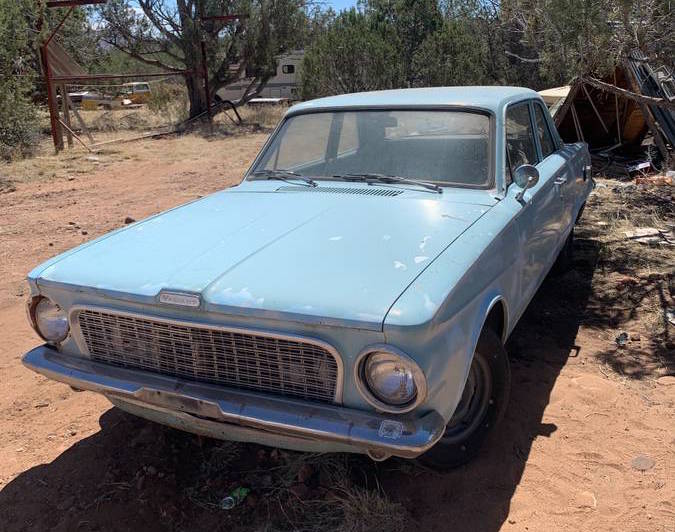 The Plymouth Valiant is a car well-known to fans of our own Editor-In-Chief, David Tracy. He drove one as a winter beater last year and waxed enthusiastic about its charms. Like David’s, this car is powered by Chrysler’s legendary “Slant Six,” but where his had four doors, three pedals, and a gearshift lever sticking out of the steering column, this one has two doors, two pedals, and no gearshift lever at all. 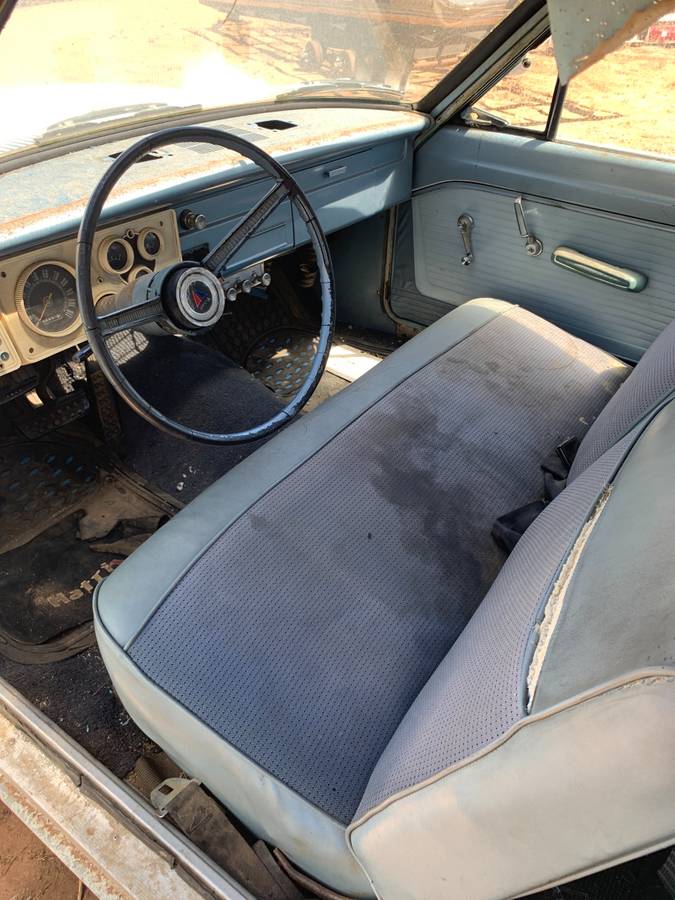 Instead, it features a Torqueflite automatic transmission with push-button controls. I’ve always known these existed, but I never knew much about them. I always assumed the buttons were electric or vacuum-controlled, but in researching this piece (yes, I research these) I found out that it’s completely mechanical. The buttons move a cable back and forth just like the lever on a normal automatic does. How cool is that?

The ad for this car doesn’t show the shift buttons (on the left side of the instrument panel), so I grabbed this close-up image from Hemmings:

The lever on the left is for Park; it works via a separate cable. To start off, you start the engine, lift the park lever, punch “D,” and away you go. To park, punch “N” and flip the park lever down. Neat, huh? 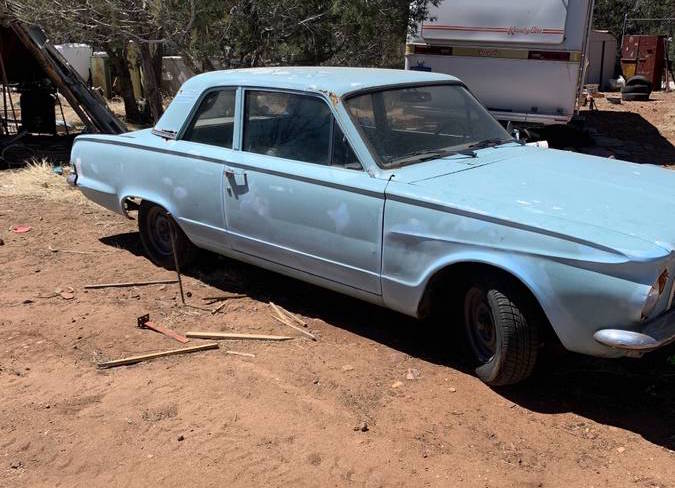 Overall, this Valiant looks decent. The seller says it has some rust, due to a life on the California coast, but nothing like folks in the Midwest are used to. The Slant Six runs well, and the car has new tires, so we have to assume it’s more or less driveable. Somehow it looks at home in the Arizona desert, but there’s nothing saying it has to stay there. 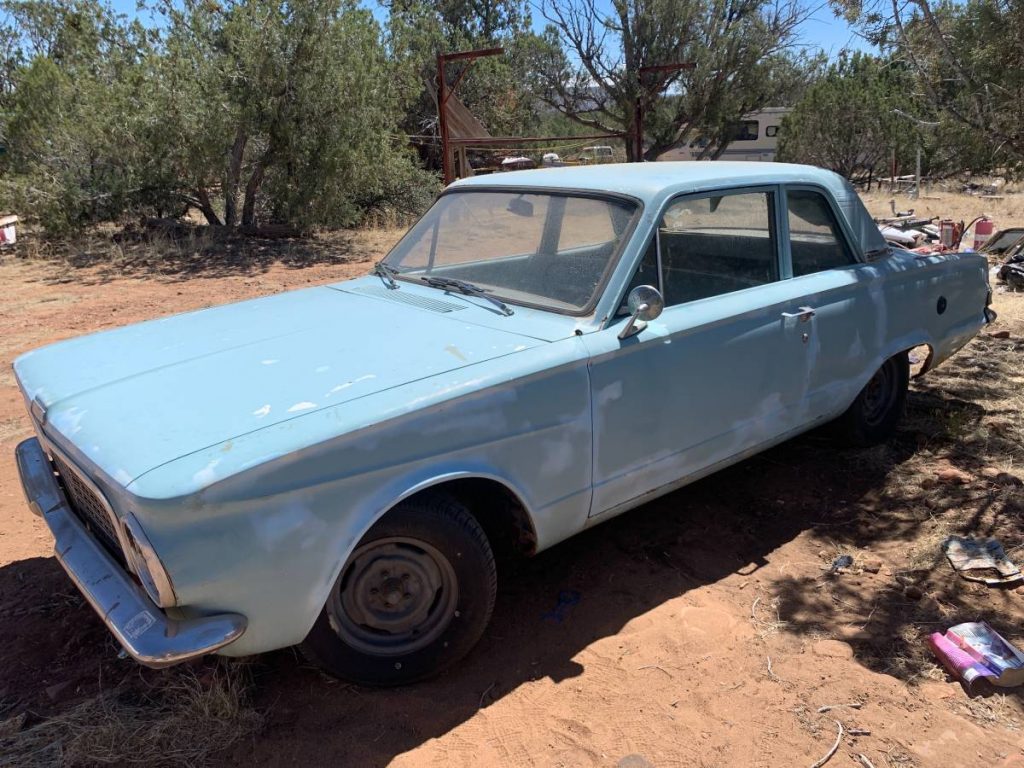 This would be a good car to try out that legendary $50 Rust-Oleum paint job on. Keep it baby blue so the sills match, and have a nice cheap cruiser. And that push-button transmission is sure to be a conversation starter at Cars & Coffee. 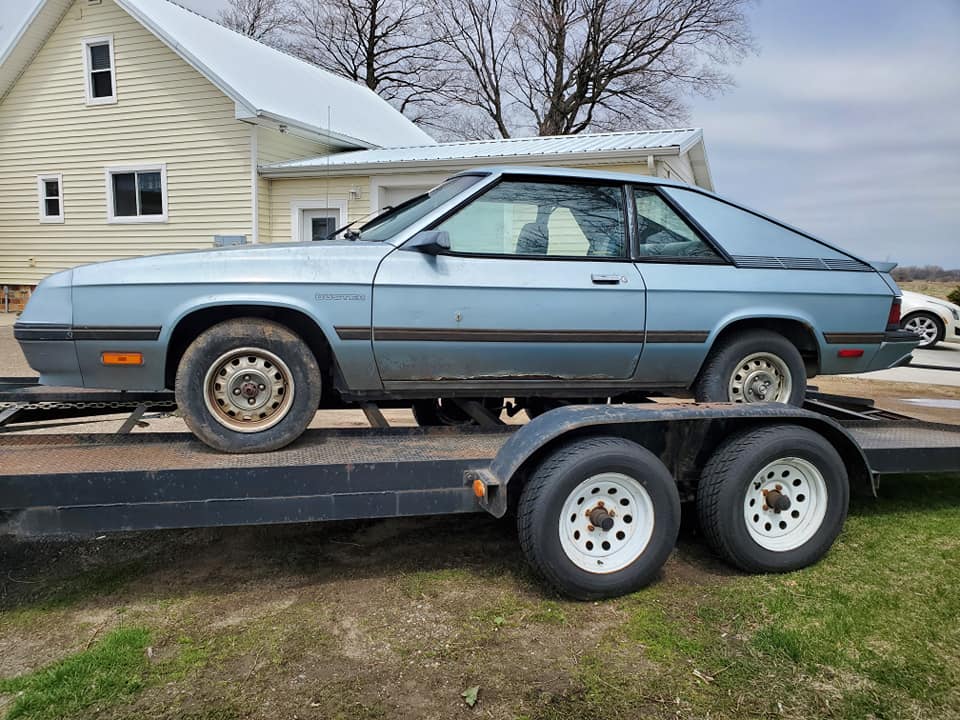 Runs/drives? “Ran when parked,” will start on starter fluid

Once upon a time, there was a young boy whose parents were buying a car. They were at a Dodge dealership, buying a gray 600 sedan, and while they were in the little room doing the paperwork, the boy sat in a Shelby Charger and a Rampage pickup truck in the showroom. He became mildly infatuated with the L-body after that, and always wanted one. His brother had a Turismo like this one for his first car; it caught fire in traffic and burned. He bought an Omni 024 in college for next to nothing; it had giant rust holes in the floor, the passenger door flew open every time he turned left, and it stalled out randomly.

That boy sees this 1984 Turismo Duster sitting dead on a trailer, and he knows it’s pretty much a crap car. But he still kinda likes it. 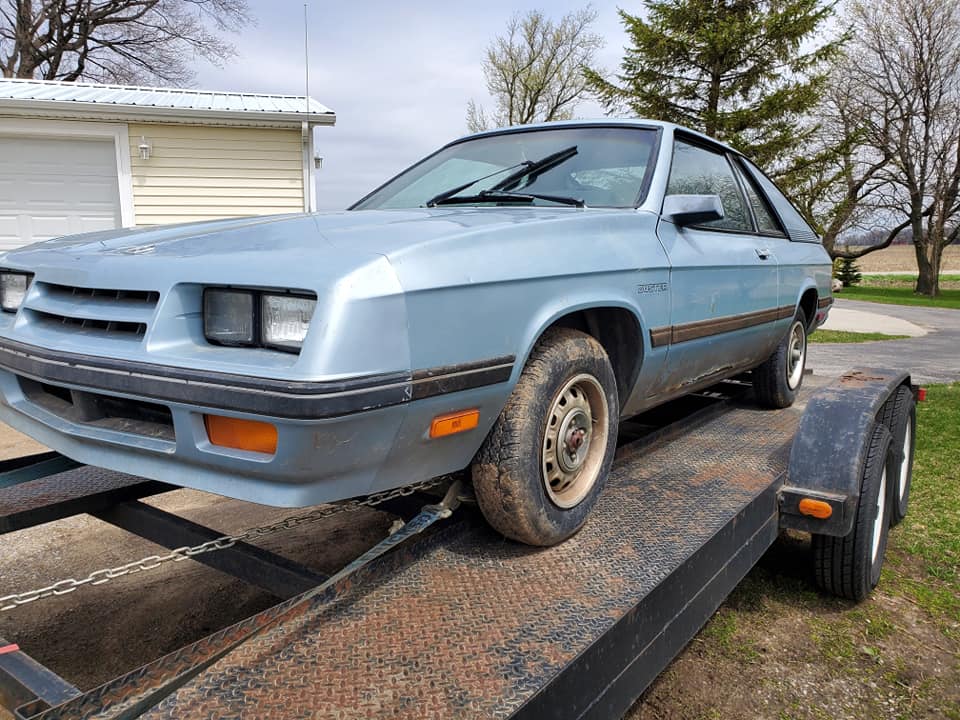 Long-time Mopar faithful were furious when Chrysler changed the names of the two-door Dodge Omni 024 and Plymouth Horizon TC3 to the Charger and Duster. These front-wheel-drive compacts were about as far from their muscle-car namesakes as they could get. Even a blessing from the legendary Carroll Shelby couldn’t make things entirely right. But whatever they were called, the cars sold well. But they’ve almost entirely vanished, as so many inexpensive “disposable” cars have. 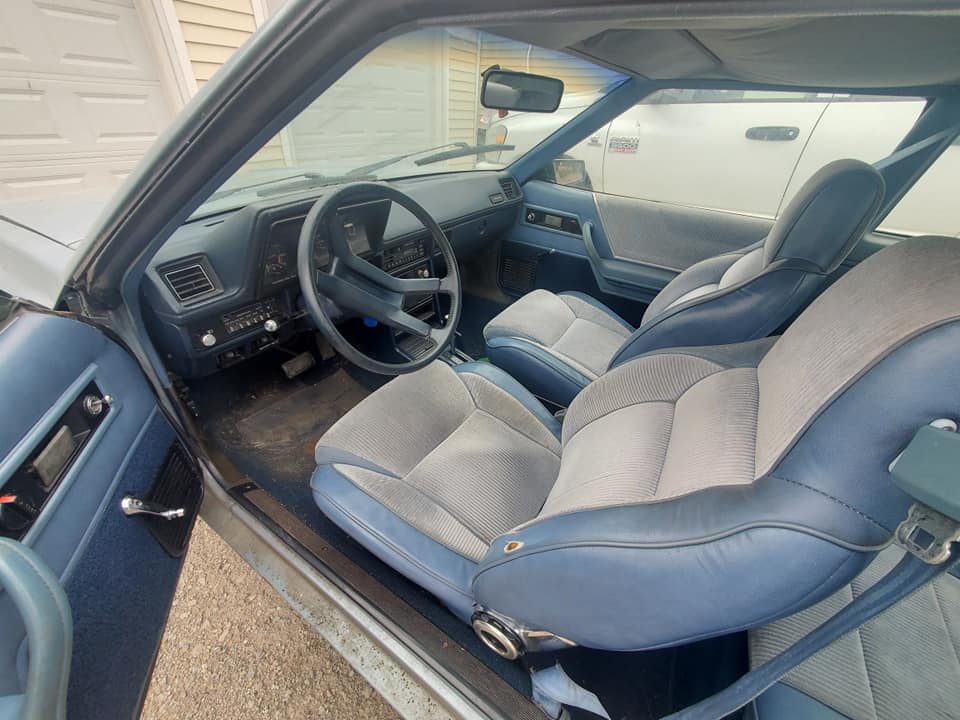 This Duster looks pretty well-preserved, give or take a little Midwestern rust. It features the ubiquitous 2.2 liter four and three-speed automatic that powered a bazillion K-cars; it’s not exciting, but it’s sturdy. This one isn’t running at the moment due to sitting, but it shouldn’t be too hard to revive, especially since the seller has gotten it to cough to life on starter fluid. 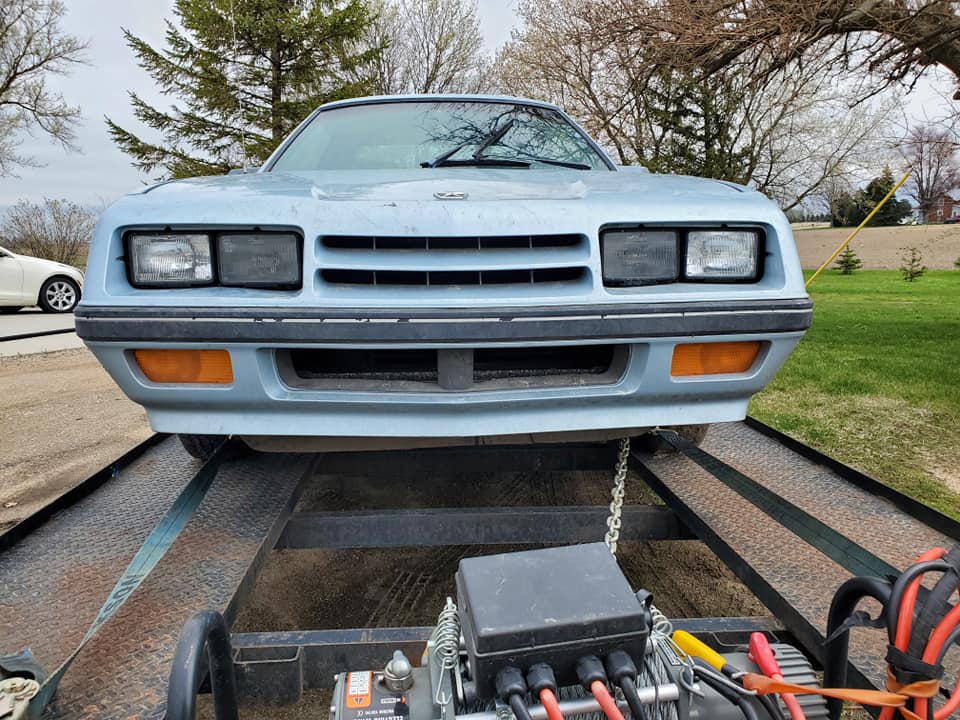 There are so few of these left that seeing one for sale, even out of commission, is kind of neat, even if you’re not much of a fan. It’s a reminder of another time, another world, a time when small, pokey cars were the norm and the music was way better. I wouldn’t actually want this car, I don’t think, but it’s fun to think about.

And that’s what we’ve got for you to choose from today: a couple of blue automatic Plymouths. Both are kinda cool time capsules, and either one would turn heads. Which one would you rather have?