Facebook-f Twitter Instagram Rss
Menu
Menu
Home » What The Hell Is Going On With The Biggest Tesla Fan Planning To Drive At A Kid With A Tesla?

What The Hell Is Going On With The Biggest Tesla Fan Planning To Drive At A Kid With A Tesla?

If you’ve been on Twitter the past few days, you may have noticed a peculiar thread being referenced and getting some attention. It’s notable because it’s one of those rare times on Twitter where a person puts out a public call for a child to run in front of a car so someone can “make a point.” Huh, you may be thinking to yourself. That’s unusual.  Maybe you’re even thinking a very reasonable what the fuck is this? That’s a healthy reaction. I’m going to try and explain what is going on here, and I’ll go ahead and say right up front that, no, I don’t actually think anyone is going to get hurt, but at the same time everything about this is, well, idiotic. Let’s dig in, I guess.

Is there anyone in the Bay Area with a child who can run in front of my car on Full Self-Driving Beta to make a point? I promise I won't run them over… (will disengage if needed)

(this is a serious request)

The thread continues, including this tweet that should make anyone with a spouse and child feel a nervous pang of pain in the pit of their stomach as they imagine this conversation:

Okay someone volunteered… they just have to convince their wife

After this tweet, we get one that explains what the hell is going on a bit more:

TSLAQ is very afraid of being exposed as liars. But if we have to disengage we will show that too.

Okay, so for those of you not a member of the sexless sex-cult of hyper-intense Tesla and Elon Musk fandom, TESLAQ refers to people who are perceived as being vehemently anti-Tesla, and in this very specific case, TESLAQ is referring to Dan O’Dowd, who has started something called The Dawn Project, which has a stated goal of “Making Computers Safe for Humanity” and has undertaken a campaign against Tesla’s Full Self-Driving (FSD) Beta software being deployed on public roads.

The Dawn Project recently released a video of tests they undertook that appear to show Teslas not detecting child-size mannequins and running into them:

Our new safety test of @ElonMusk’s Full Self-Driving Teslas discovered that they will indiscriminately mow down children.

I don’t have all of the details or parameters of the test, but we have seen emergency braking issues with Teslas before, but to be fair, it’s hardly just Teslas that have failed tests like these. Here’s a picture of a Honda knocking the crap out of a mannequin from a AAA test, for example: 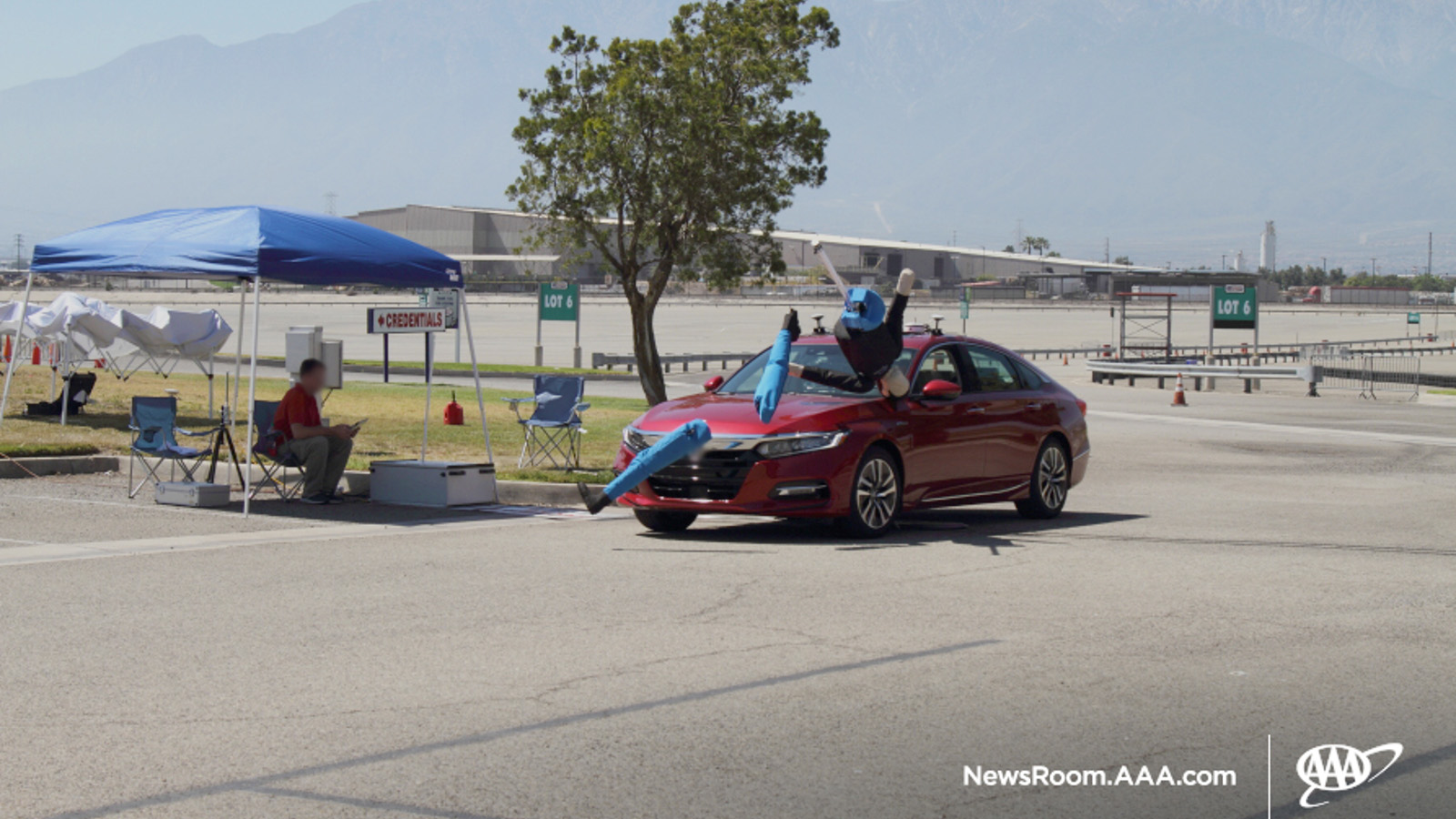 Now, I’m not saying that I don’t think there’s real problems with the way Tesla has been deploying their FSD Beta, because I definitely do. I also think Level 2 and Level 3 semi-automated systems from any manufacturer are inherently and conceptually flawed. At the same time, I think the Dawn Project’s portrayal of Tesla FSD-controlled cars as malevolent automatons that “will indiscriminately mow down children” is needlessly and counter-productively histrionic.

You know what else is needlessly and counter-productively histrionic? Whole Mars Catalog trying to make some misguided point by conducting an emergency stopping test with someone’s kid.

I think, of course, that Whole Mars Catalog – whose real name is Omar Qazi – is quite deliberately trying to get attention by tweeting things like this:

The best part about running over children in a Tesla is that it’s zero emission.

No toxic pollution put into the air like when you run over kids in another brand!

Again, I’m sure Omar’s goal is to not hurt anyone here. Based on tweets and my discussion with him, he’s planning on using a mannequin for a test, and for his test with the actual kid, the plan is to not have the kid actually walk out into the road, but walk toward the car but not leave the sidewalk:

4, Pedestrian can stay on sidewalk and car will still stop. No need to get into road. Chance of collision with person on sidewalk is near 0

just walking towards the road will make it stop

5. Test will be performed at 5 miles per hour

6. Driver will be father of child

7. Drone pilot in car will watch kid from above

8. People & kids walk in front of my car on FSD Beta *every day* in San Francisco unexpectedly. Nobody has died. If we expect it and know where they will come out, even better.

Of course, this is still a shit idea. It’s deeply stupid, will prove almost nothing, and the only thing that it will really demonstrate is the remarkable depths an obsession can take people. And it’s not like anyone can guarantee the kid will be perfectly safe: it’s still a kid walking toward a moving car, which, yes, happens every day, but it’s never a zero-risk situation. Only in this particular case, it could be completely avoided.

I’m not a particularly safety-focused parent, if I’m honest. I routinely drive my kid in archaic cars with minimal safety equipment. I let my kid use knives and run around in gravel and jump off logs in forests and all that crap. But putting a kid in this sort of position to try to half-assedly make some point in service of a for-profit company that doesn’t have anything really to do with you? Fuck that.

Tesla is an unusual company regarding the level of loyalty it seems to inspire in its fans, which sometimes manifests itself in ill-considered, possibly dangerous stunts like this. Remember the jackass who used his wife to test Autopilot’s emergency braking a few years back? People who own Fords or Toyotas aren’t doing this, and while Tesla fans may point to this as a positive, it’s not. If the way you feel about a company is making you put your loved ones in the path of a moving car, something is fucked up, period.

I’ve interacted with Omar before. We once had a debate on YouTube. To Omar’s credit, he’s always been receptive to talking to me, even if we tend to disagree on, well, pretty much everything. I spoke with Omar about this, and as usual, he was willing to discuss it with me (my texts are in orange): 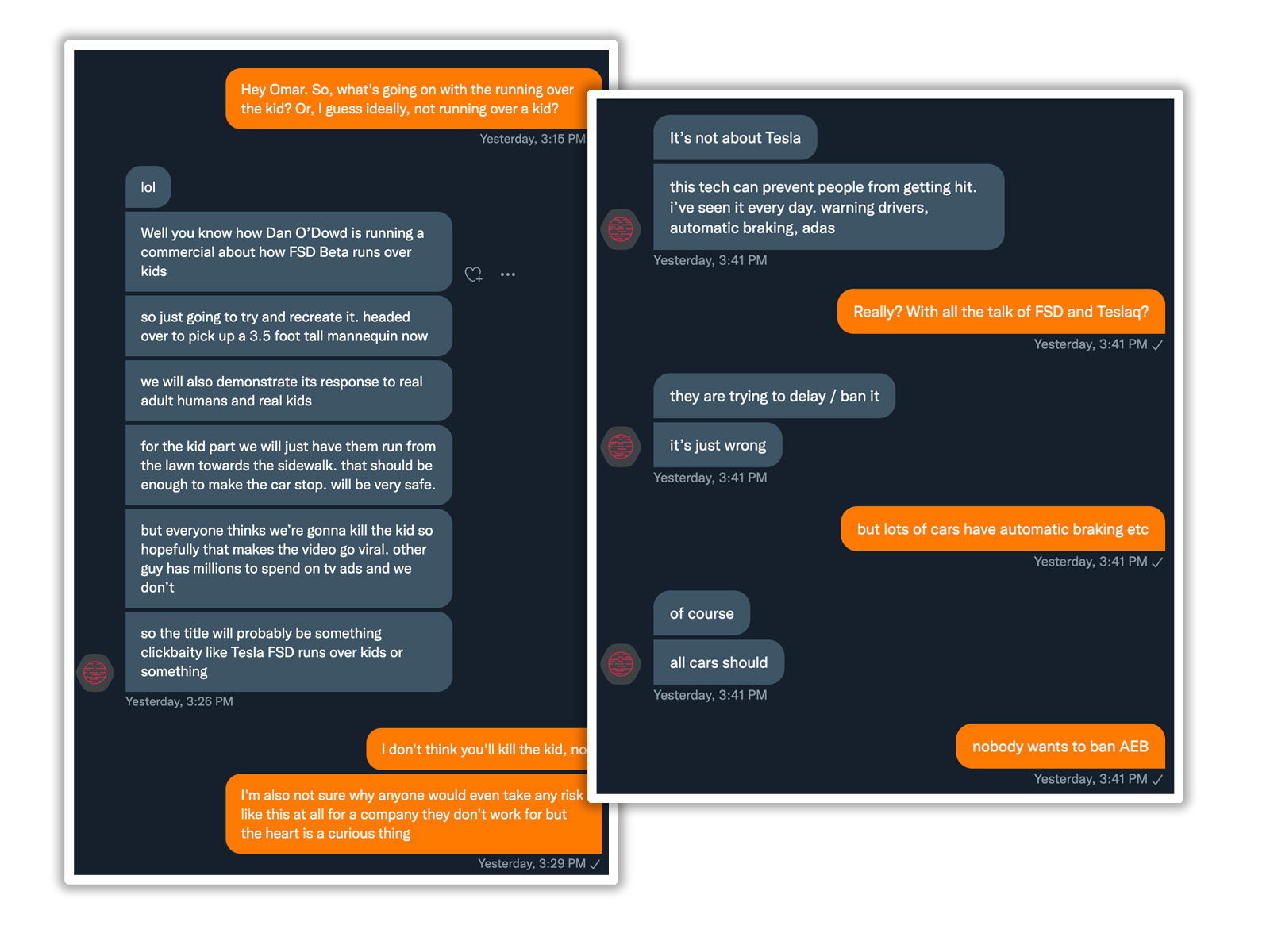 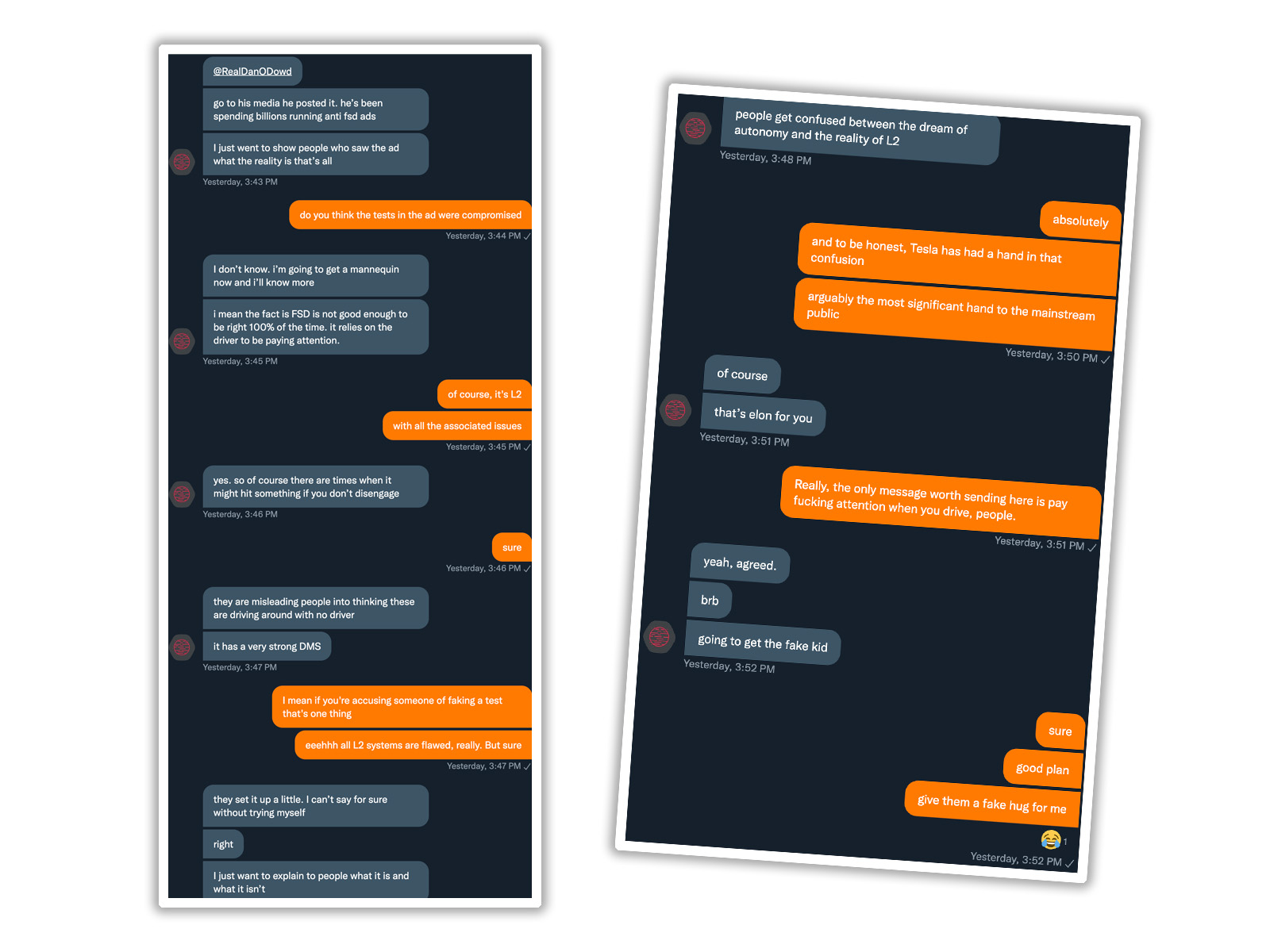 In the exchange, it sounds almost reasonable. And he admits that the framing of it is an attempt to grab attention and get the video to go viral, which is hardly a shock.

I’m fine with doing a test with a mannequin, on some sort of closed track. It’s good to do these tests, to try and see how the system reacts. That’s fine. But that’s not what’s happening here, it’s not why we’re talking about this at all.

Nothing that’s going to happen here is going to appreciably help anyone, on either side. One test isn’t going to prove shit, because there are so many variables involved here. The use of an actual kid is irresponsible and stupid and exploitative, and I hope Omar realizes that before he’s planning to do this test on Saturday.

It’s not private people’s responsibility to test semi-automated driving hardware on people’s children. Tesla needs to do these tests, and regulatory agencies need to be watching them. If you ever find yourself so emotionally invested in any carmaker to the degree where you actively are seeking to put a kid in even potential danger to prove some sort of point, then that means it’s time to step back and really evaluate what the hell has gone so awry in your life to bring you to this point.

This isn’t normal, or good or smart or useful or anything. Even the best outcome of this test will result in no minds changed.

I know it’s a big ask, but this may be one of those times where the only thing to do is put emotions aside, stop hoping Elon will notice you and fall in love, stop injecting undue drama into the situation, and be a fucking adult.

It’s no fun that way. But it’s the only way to get through this idiocy.

And, to that dad considering doing this test, from another dad: if you want to give your kid a healthy bit of risk and controlled danger, take him to a go-kart track instead. Go have some actual fun, for you and your kid. Get some ice cream. Send me the bill and I’ll even Venmo you for the ice cream. Just don’t play into this idiotic game.

I'm a co-founder of the Autopian, the site you're on RIGHT NOW! I'm here to talk to you about taillights until you cry and beg me to stop, which I absolutely will not. Sorry. Hug? Also, David's friend.
Read All My Posts »
PrevPreviousHelp Out The Autopian By Completing This Short Survey!
NextI Took A Close Look At The 2023 Ford Maverick Tremor’s Off-Road Hardware. Here’s What I LearnedNext