Good morning! It’s Wednesday, the last day of August (seriously?!), and today we’re looking at two nasty old Fiats that are halfway to being cheap race cars… or scrap metal. You decide. But first, let’s see which of our two pairs of trucks had the better hand:

Well, that’s pretty conclusive. And as it so happens, I agree; I’d love to have a Rampage, but I think I’ll hold out for one that isn’t quite so derelict. And I’ve been a fan of Nissan trucks for many years.

Speaking of derelict, for today I found a pair of crusty Fiats that have complete drivelines and reasonably solid bodies, but no interiors to speak of. As such, they are good candidates to become LeMons race cars or Gambler cars or or maybe just headaches waiting to happen. That’s for you to decide. Let’s have a look at them. 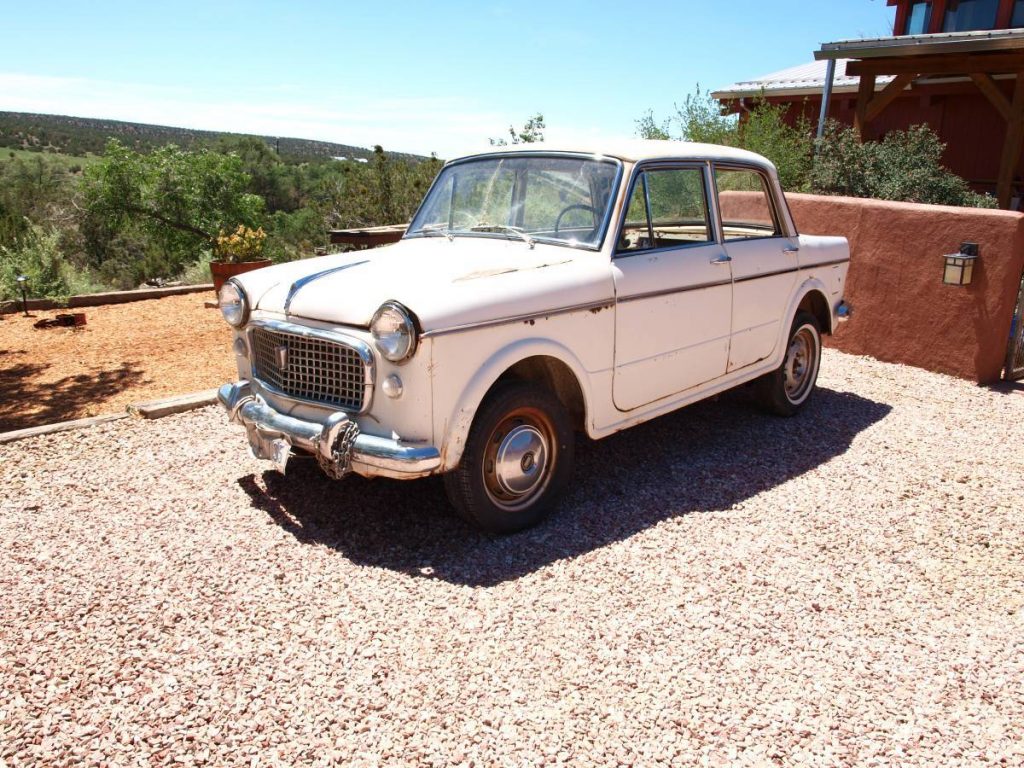 Fiat was one of many carmakers vying for a piece of the small car market in the US in the 1950s and ’60s, a market that Volkswagen absolutely commanded. The 1100 was in the middle of Fiat’s range at the time, but just barely big enough for US roads. Fiat sold the old rear-engined 500 and 600 here, but they were about the size of the hood ornament on a Buick. 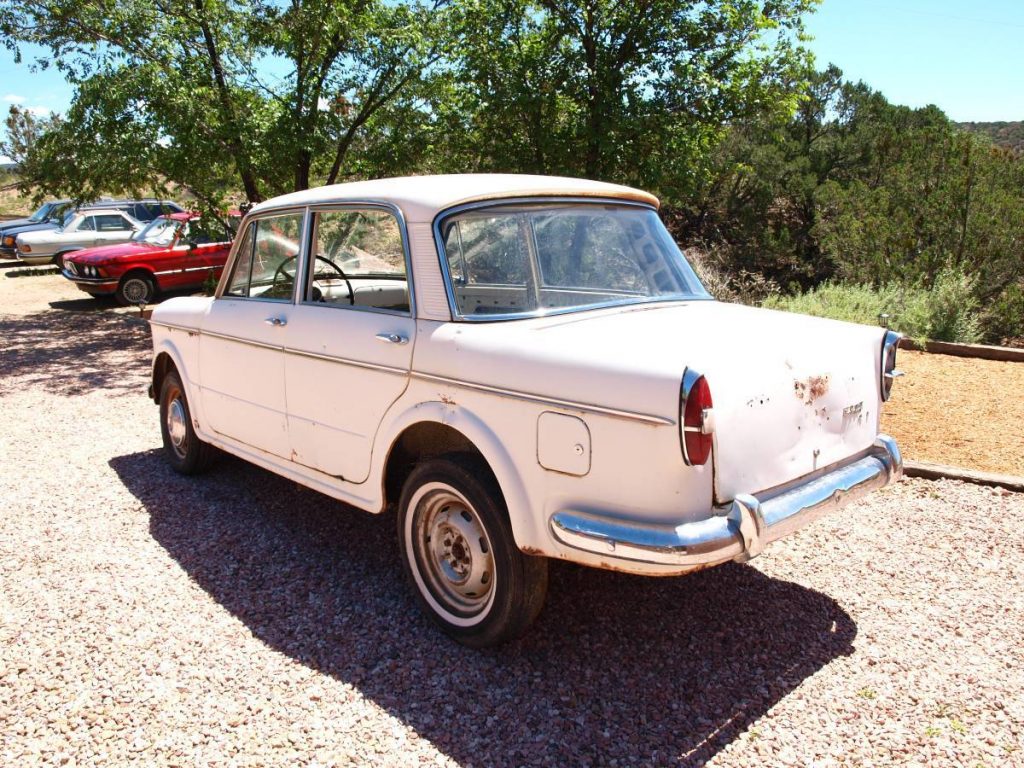 This particular 1100 was not a US model, according to the seller, but brought over by a serviceman returning from Europe in the ’60s. It’s a later 1100, without the signature rear-hinged “suicide” front doors of earlier 1100s. Fiat changed the style of the 1100 a few times, though it remained a four-door sedan, throughout its run from 1953 to 1969, when it was replaced by the front-wheel-drive 128. But in what would become a tradition for Fiat, a license-built version of the 1100 was produced for many more years, in this case by PAL in India, until the year 2000. The 128 was produced in Egypt and Serbia as late as 2008. Fiat’s larger 124 sedan, of course, survived until 2012 as a Lada. 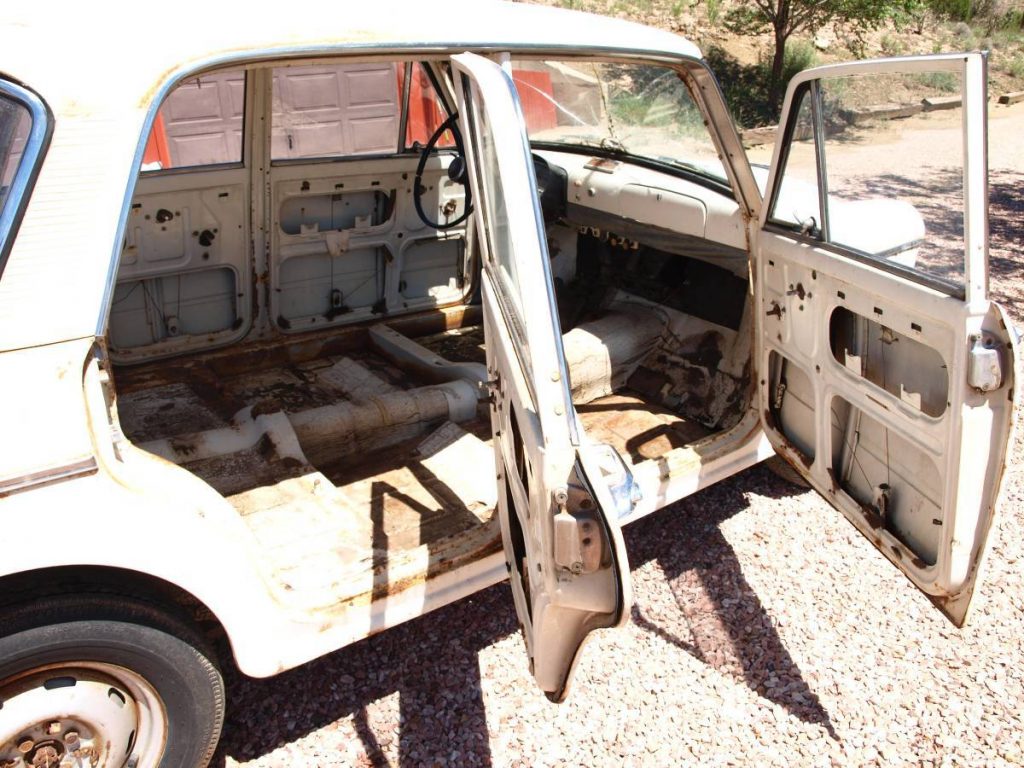 The interior of this Fiat is a bit, well, Spartan. As in completely missing. The dashboard is in intact, but that’s it; everything else is gone. Which means, of course, there is plenty of room to weld in a cage and install a single racing seat. I mean, you’ll never find restoration parts for this thing. Mechanical parts, sure, but door cards? Forget it.

Bonus points if you turn it into a race car, but keep the column-mounted shifter for the 4 speed manual: 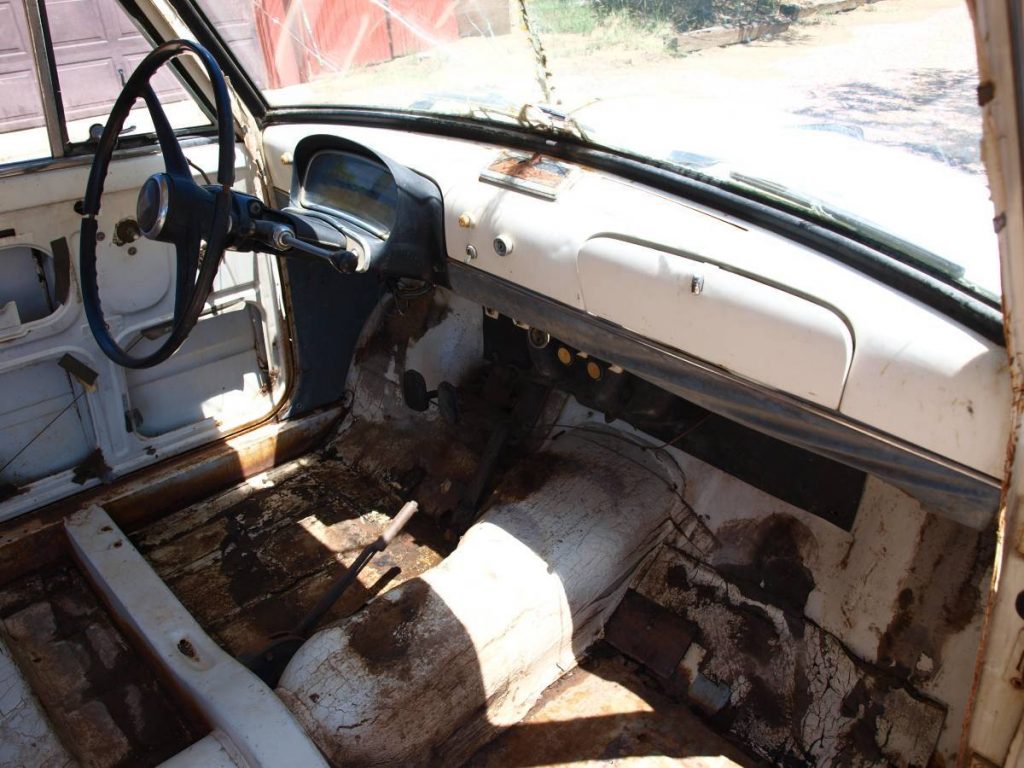 Mechanically it looks intact, and the seller says the engine spins freely, so you can probably get it going again. It’s a simple pushrod 4 cylinder with one Weber two-barrel carb, nothing exotic, apart from being a 60-year-old Fiat. 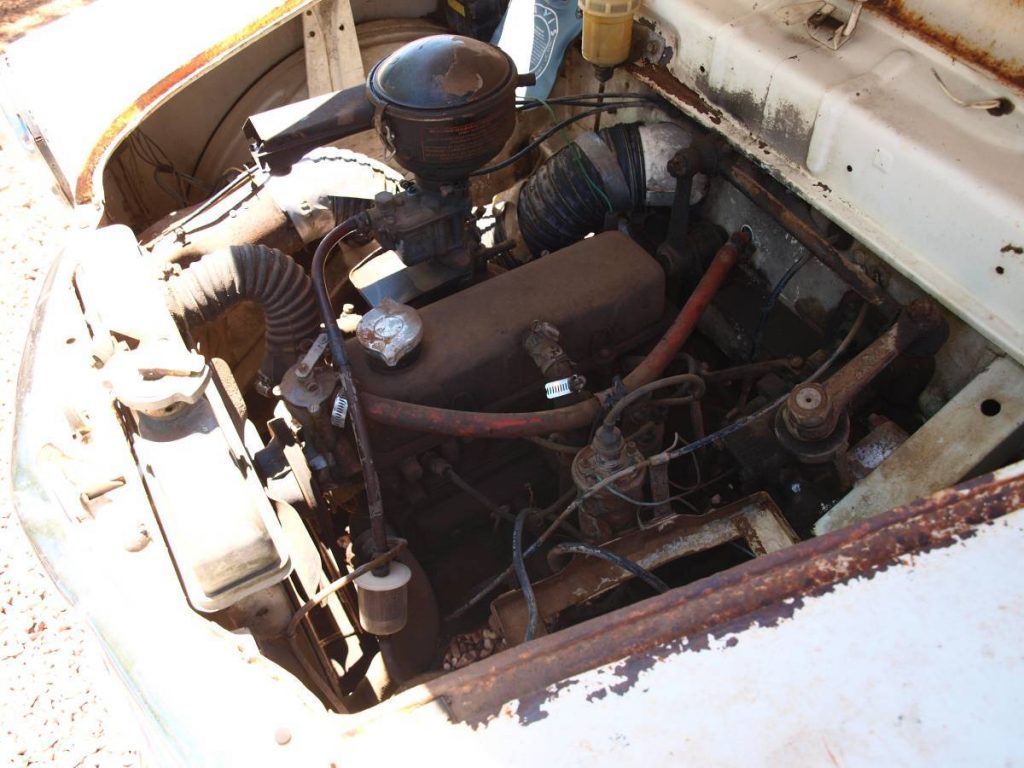 Obviously this isn’t a car that’s worth restoring to stock and original, but it could make a really fun toy. And you certainly won’t see another one pretty much anywhere. 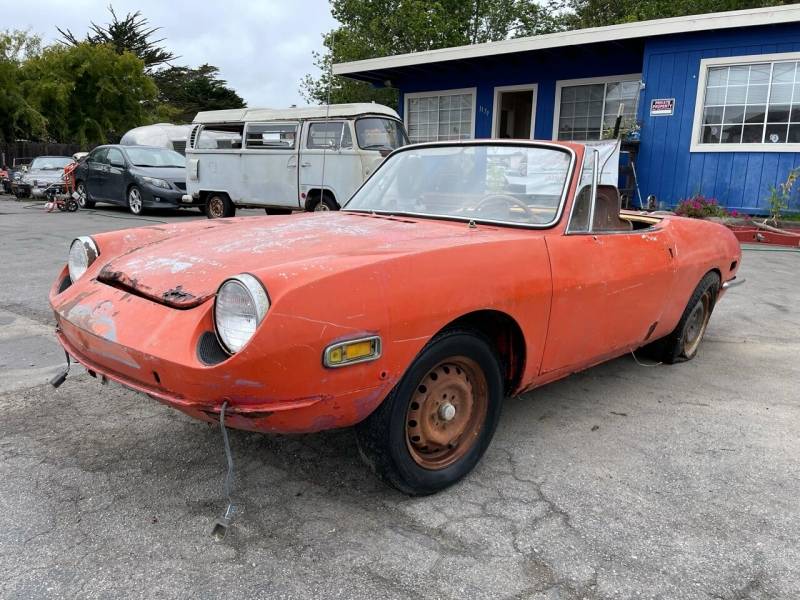 The Fiat 850 was an evolution of the old 500/600 rear-engine architecture. The Spider was one of several bodystyles available, including a sedan, a coupe, and even a minivan, known as the 850 Familiare. The Giugiaro-styled Spider is probably the best-remembered, at least in the US. It’s another one of those little sports cars that used to be all over the place, but is rarely seen now. 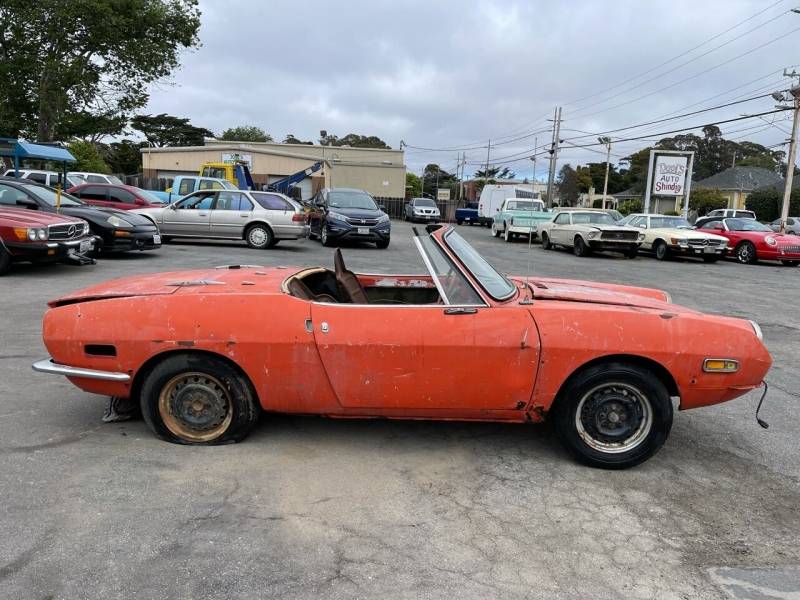 It’s a cute little car when it’s in good shape, really it is. Just use your imagination. (Or Google.) And it’s a ton of fun to drive, as long as you keep in mind that there’s only 52 horsepower on tap. But then, it only weighs 1600 pounds, so you don’t need a lot of power. It’s one of those cars you can redline in every gear and barely break the speed limit, but feel like you’re hauling ass down the Mulsanne Straight. 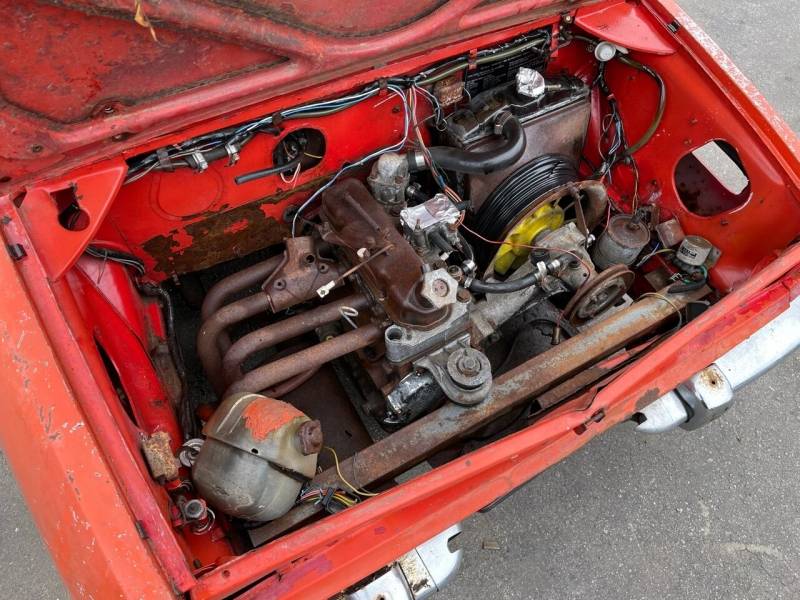 At least, once you get it going. No indication is given of the condition of this little 903cc wonder. But there is a good enthusiast’s community around these cars, and parts aren’t hard to come by. A competent and determined mechanic should be able to get it buzzing again, or swap it out for a running engine. 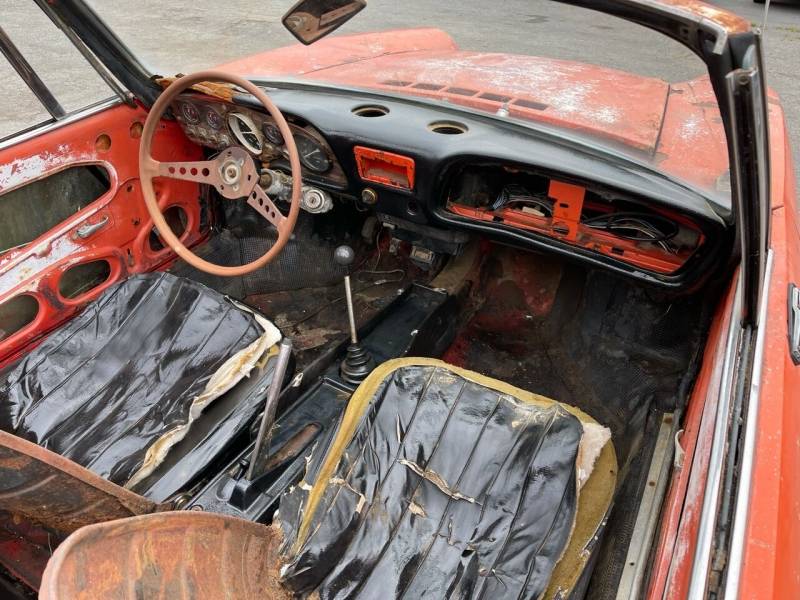 Of course, once you get it running, you’ll need a place to sit in which to drive it. This little 850 has a tiny bit more of an interior to it than the 1100 above does, but not a whole lot. And what’s there is only fit for the Dumpster. But all you need is a seat (or two) and a new steering wheel. Door panels? Carpet? What are you, a Rockefeller? It’s a sports car; it isn’t supposed to be comfortable. 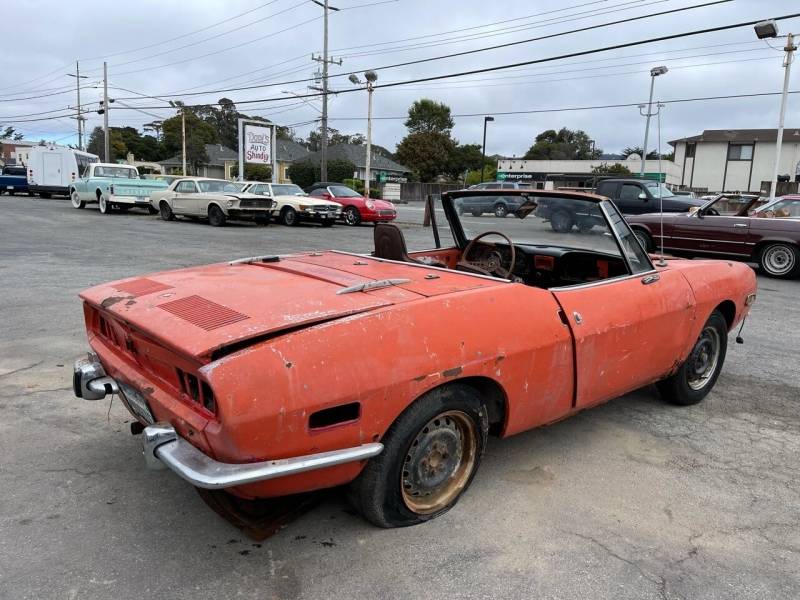 It does appear to be missing some rather vital components like taillights and turn signals [Editor’s Note: Great opportunity to really explore some light options here! – JT]  (and, weirdly, a radiator cap). The lights should be available, but again, if you go the race-car route, you don’t need to bother. There’s some rust on it, but honestly, it’s not bad for a ’70s Fiat. Yeah, it’s a project. But hey, it’s five hundred bucks.

I could try to justify these picks further, but the honest truth is that I just like Fiats. If you do too, then you’ll see some cool potential here. If not, well, I’ll have something different for you tomorrow. For today, though, this is what you get. Which one will it be?

Pacific Northwest-based self-taught DIYer of all the things. Current fleet: 1971 MGB GT, 1989 Chevy K1500, 2013 Chrysler 300C, 2003 Infiniti QX4, and 1966 Aristocrat Land Commander trailer. Not to mention about 40 RC cars and around 100 model kits...
Read All My Posts »
PrevPreviousFaraday Future Continues To Produce More Drama Than Actual Cars
NextThese Are The Vans And Pickup Trucks Tatra Could Have Made From Their Rear-Engined Cars But Didn’tNext