I’ve made no secret of my fascination with rear-engined Tatras, because why would I want to hide my admiration for something so clearly wonderful? I wouldn’t, that’s why. By the mid 1950s, the Tatra formula of large, streamlined, rear-engined, air-cooled V8-powered executive cars had developed into the vaguely Beluga whale-looking Tatra 603. We all know this, you’ve likely had this very discussion multiple times today, with your bootblack or ornithologist or whatever. What you likely did not know, though, was that Tatra experimented with making vans (both passenger and cargo varietals) and pickup trucks using Tatra 603 mechanicals. They didn’t make it to production, but they’re still fascinating, and it’s incredibly important you should know about them. So let’s get on that.

In case you somehow forgot about the Tatra 603, I happen to have a little video handy here where I discuss some of the car’s secrets:

That was edifying, right? 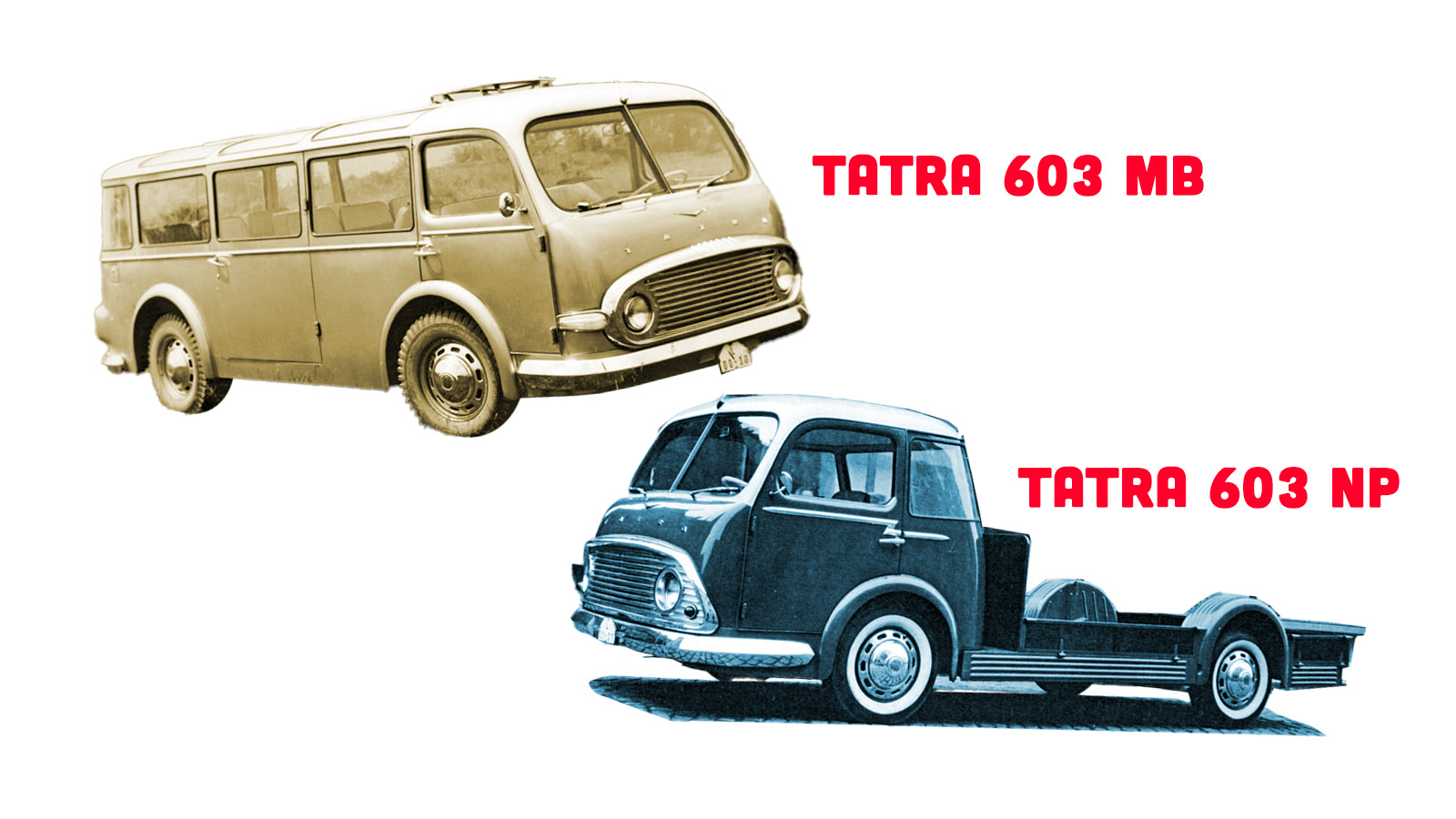 Both of these were developed between 1961 and 1962, by a Bratislava auto shop that was known as Orava before being incorporated into the Tatra organization and renamed the evocative name “Plant 5.” This group was told to develop some light commercial vehicles using the drivetrain of the Tatra 603, a move that I suspect was likely inspired by seeing the success of similar commercial vehicles developed from automotive drivetrains, like Volkswagen’s Type 2 Transporter or perhaps even the Fiat 600 Multipla.

Visually, I think the Bratislava team came up with something really quite striking-looking. The proportions of the van are especially interesting, with a large wheel-to-body-height ratio that gives it a low, aggressive stance, something that is by no means expected in a light commercial vehicle. 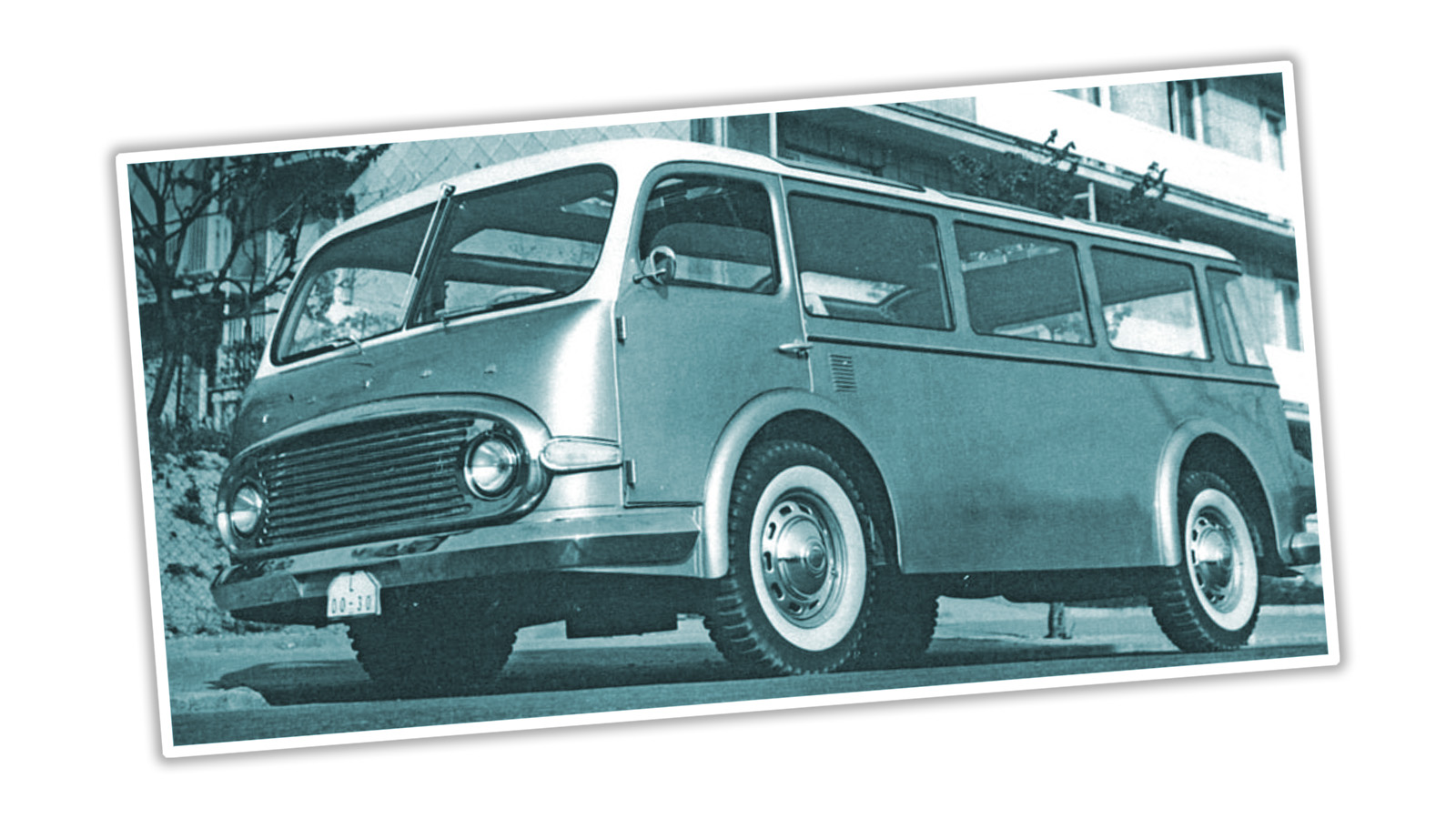 It’s cool-looking, right? Visually, it doesn’t really have that much in common with its drivetrain donor car, the Tatra 603, but it has an awful lot in common with another Tatra vehicle, the Tatra 805 military truck, which donated its entire cabin to the prototype people-carrier: 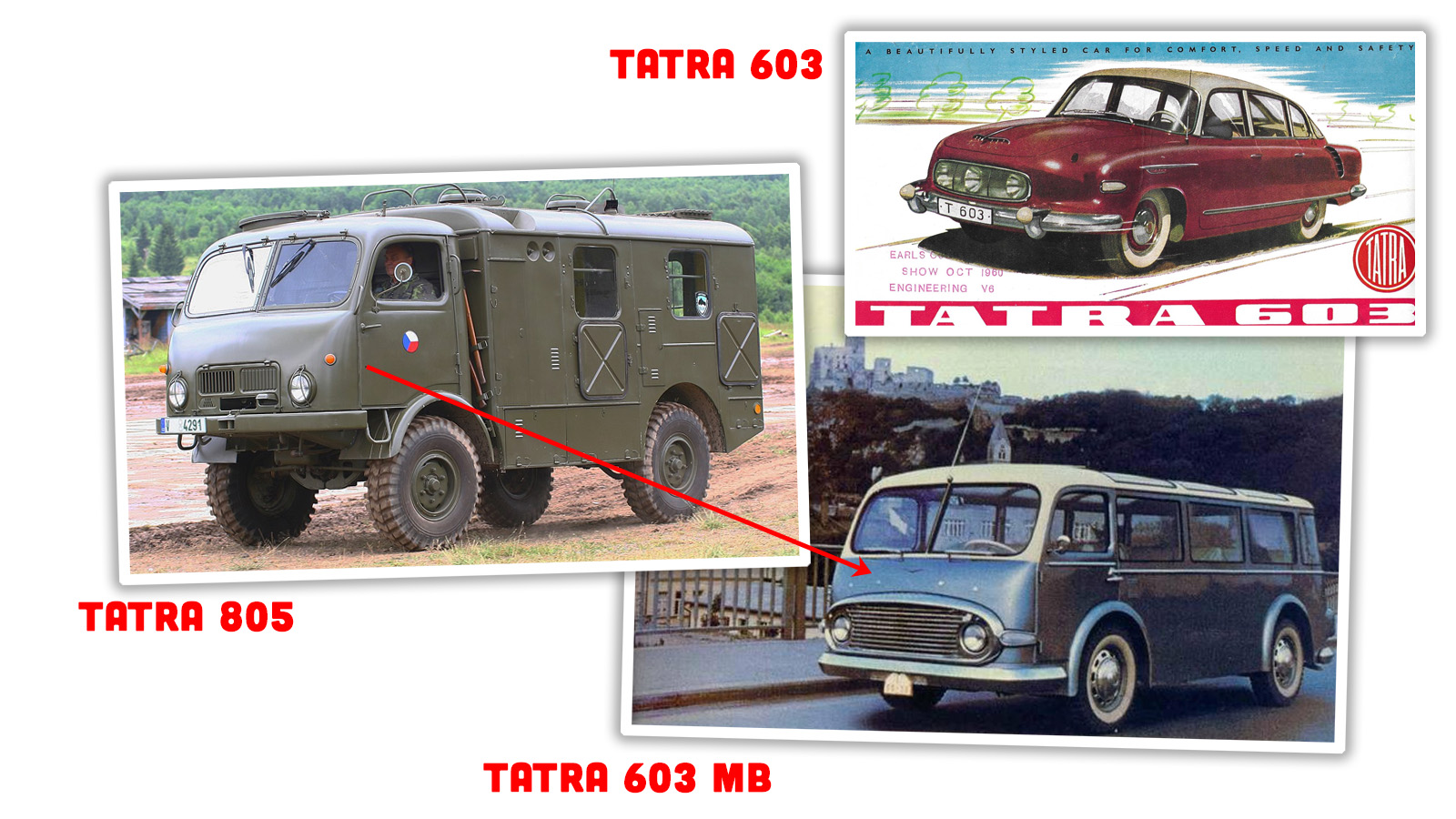 You can see some details like indicators taken from the 603, along with a similar level of chrome trim and refinement; this was a Tatra after all, a car for the more-equal-than-others party members and not, say, a Skoda or something.

You may also notice a pretty large grille up front, which should give a clue about how the Tatra 603 drivetrain was used in the commercial versions. Where the normal 603 put its air-cooled V8 at the rear, behind the rear axle, the 603 MB dragged the whole assembly up front, sticking the engine behind the front axle and the gearbox in front of that (same orientation as it was at the rear, just moved to the front axle instead of the rear) and now the front axle was driven (making this Tatra’s first FWD vehicle).

This front-mid arrangement seemed to work well for keeping the rear of the van extremely open and flexible, but the rather tall V8 did take up a lot of room in the cab area, as you can see in this pic of the interior, where a pair of rear-facing seats flanks the massive, upholstered tower that hides the engine: 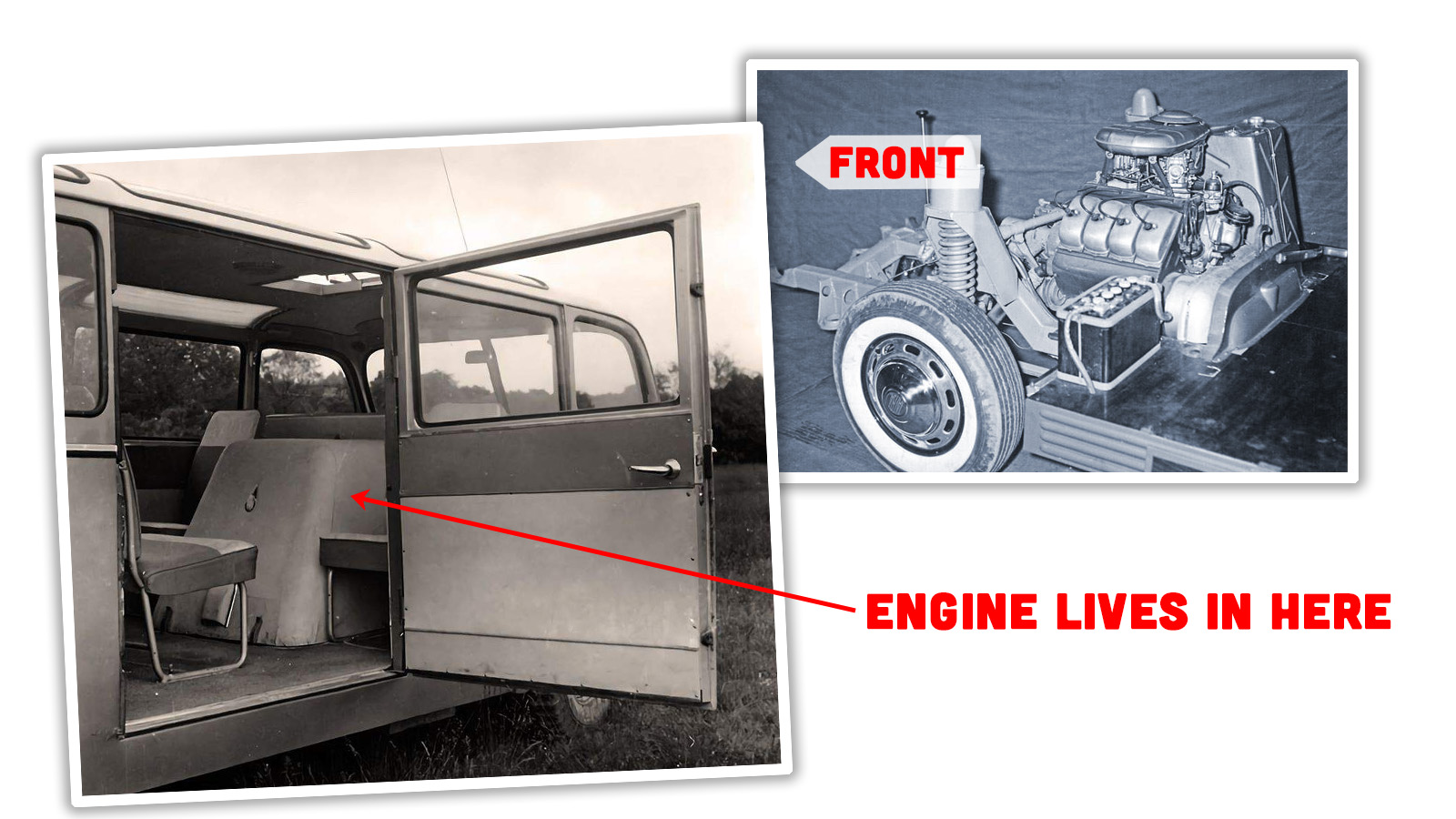 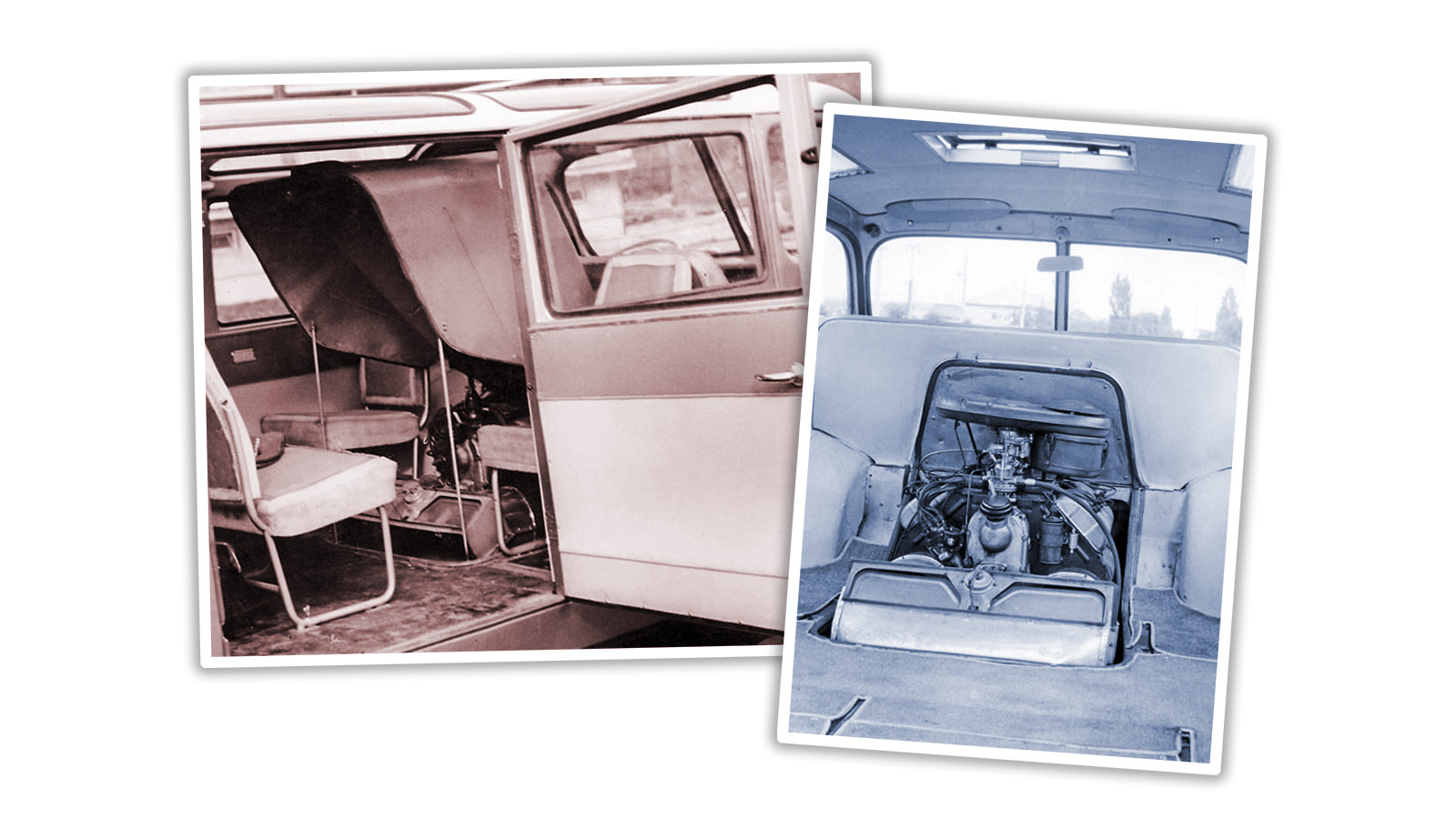 This layout did offer some other interesting design and packaging choices, like the fact that the 603 MB has to be one of the vanishingly few van designs that uses a hatch-and-tailgate type of rear access: 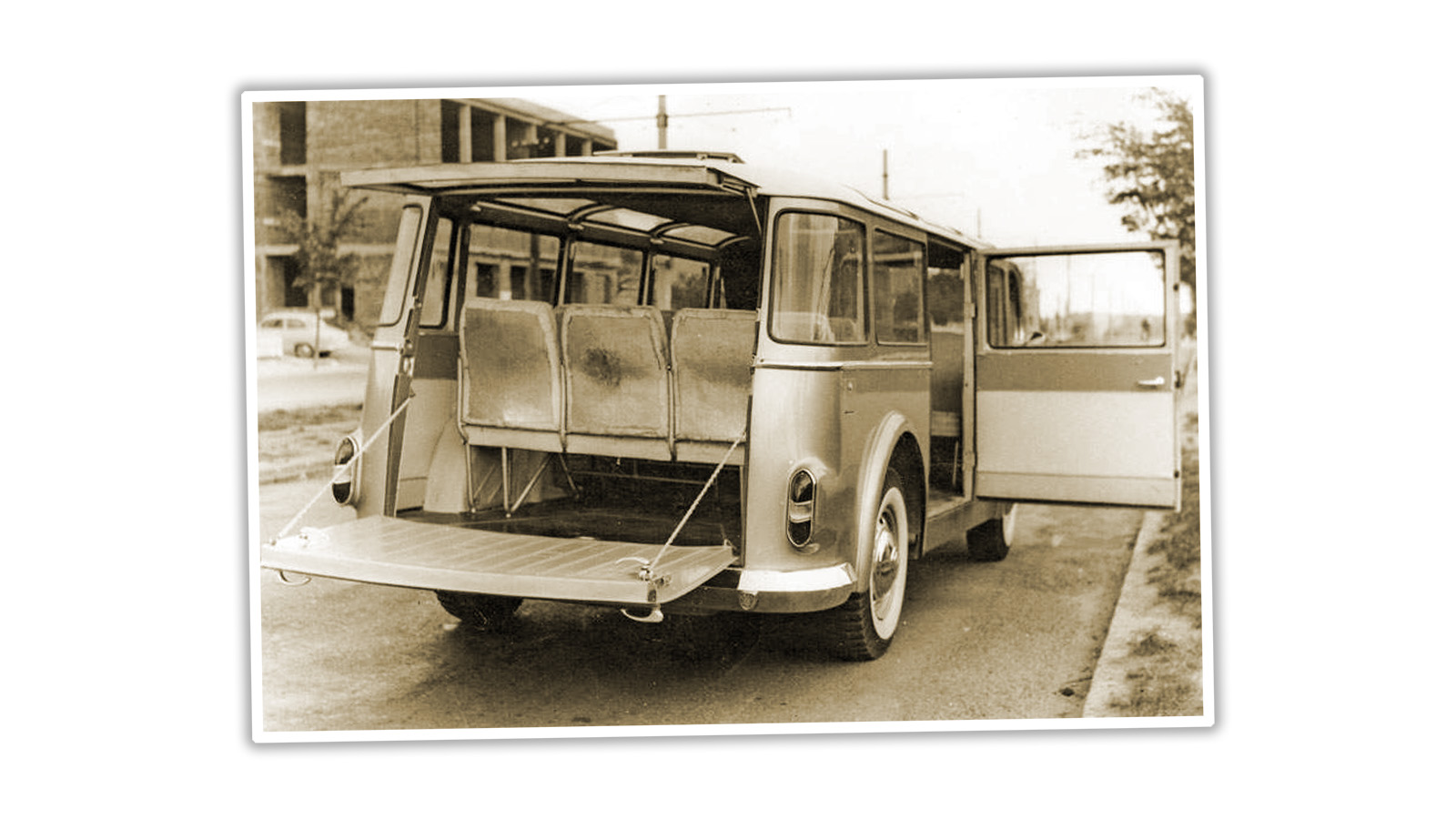 I’m not sure why tailgates are so rarely seen in vans – maybe because it makes loading more difficult, especially in urban, street-parking environments. You can also see the Tatra 603 taillights in this picture, along with those curved corner windows and skylights that are reminiscent of those 23-window VW Microbus Sambas.

The open rear floorplan design is especially evident in the 603 NP, which is really something of a chassis-cab vehicle, ready to have all sorts of custom rear bodywork – ambulance, food truck, bookmobile, book ambulance, mobile cat breeder, whatever – placed on that vast flat plain. 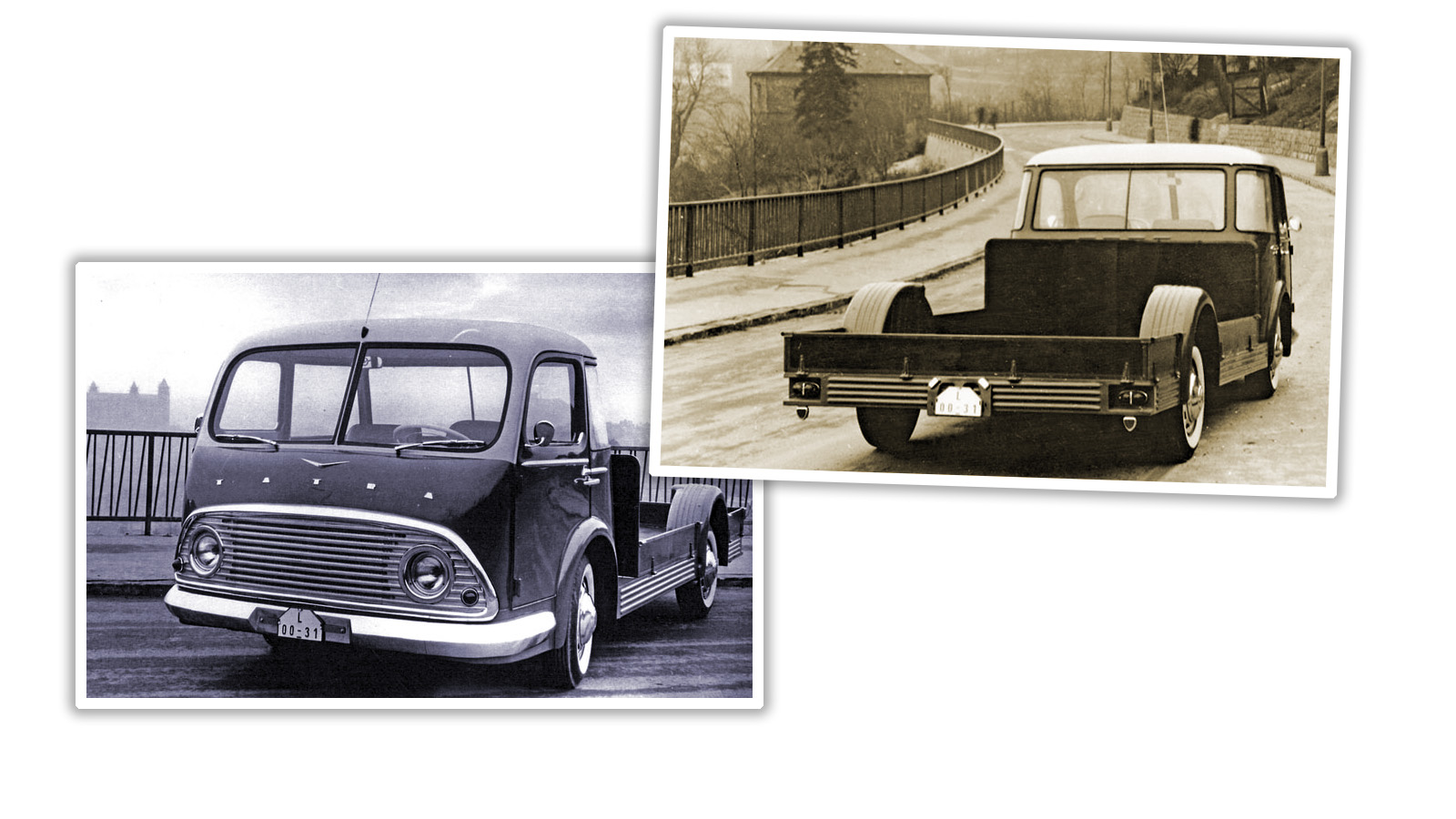 Look how low that bed height is! Without a differential or anything like that underneath, Plant 5 engineers were able to make a very low, easy-t0-load cargo area there, which would also likely prove very useful with some sort of enclosed body on there as well.

For a wide variety of reasons, not the least of which was the Byzantine state-run management of Tatra, the idea of a 603-based commercial vehicle line never made it past these two prototypes, which seems a shame, because with a bit of development, this really could have become a very useful family of passenger and cargo vehicles. 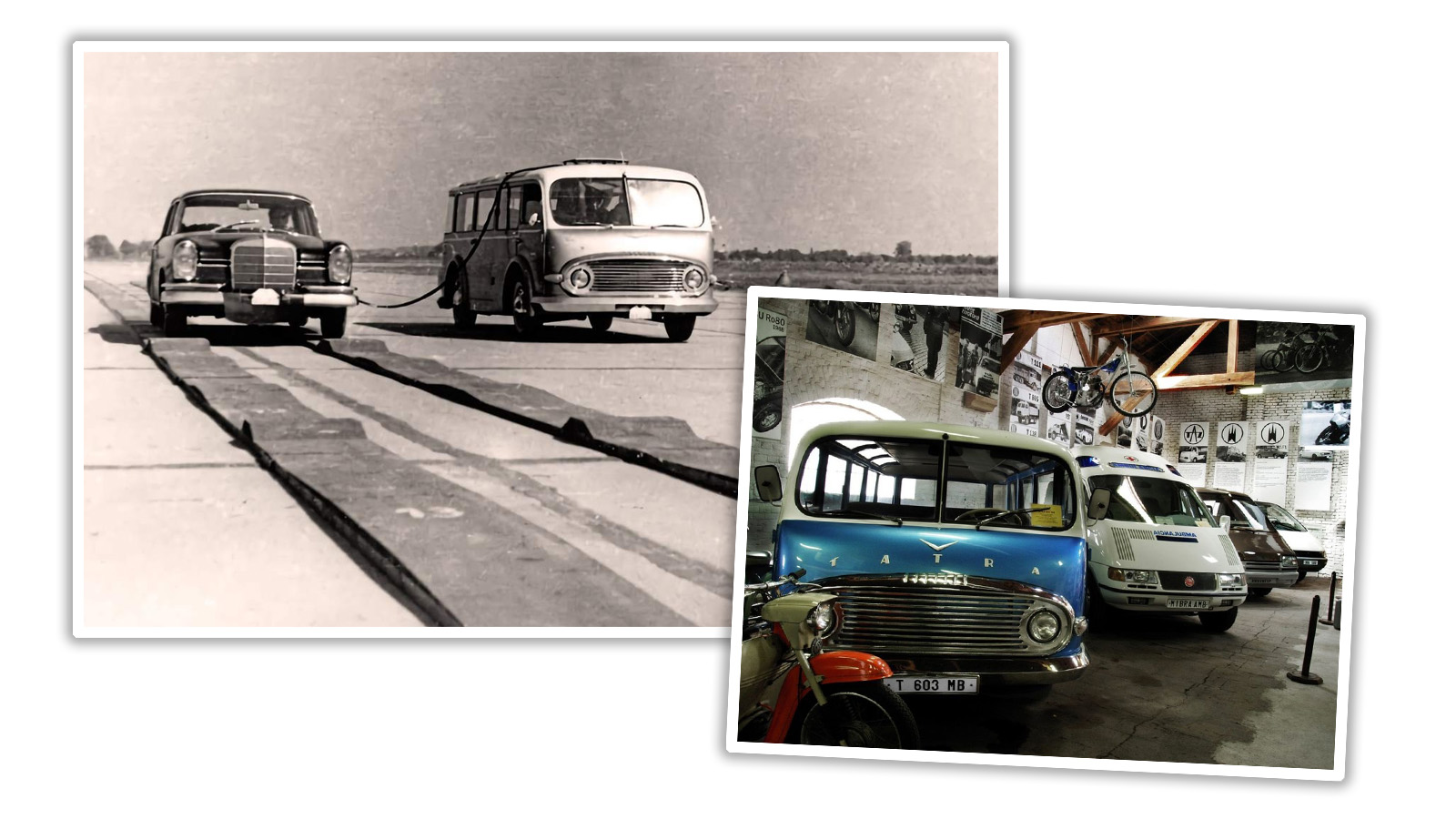 The passenger van survived, having its 13 (!) seats removed and was pressed into test/instrument vehicle duty, later getting a restoration in the 1990s and now lives in the Bratislava Transport Museum.

These prototypes are fascinating examples of variations on an already fascinating car, hinting at a broader, longer life that could have happened, but didn’t. These 603 derivatives are also interesting in that they’re a real bridge between the two faces of Tatra – the one that made luxurious, rear-engined large sedans for Communist party bigwigs, and the other, that’s still active today, that made large military and on-and off-road trucks.

I'm a co-founder of the Autopian, the site you're on RIGHT NOW! I'm here to talk to you about taillights until you cry and beg me to stop, which I absolutely will not. Sorry. Hug? Also, David's friend.
Read All My Posts »
PrevPreviousWhen Life Gives You Fiats, Make LeMons Racers: 1962 Fiat 1100 vs 1970 Fiat 850 Spider
NextʅɐɯɹoN ʎʅʇɔǝⅎɹǝԀ ɯǝǝS sƃuᴉɥꓕ pu∀ ɐᴉʅɐɹʇsn∀ uI pǝʌᴉɹɹ∀ ǝʌ╻I (UPDATED SO YOU CAN READ IT)Next