Here’s A Detailed Tour Of One Of The Last Big, Rear-Engined, Air-Cooled Cars Ever: The Tatra T700

After reading Jason’s article on a Stephenson-style imagined history for Tatra’s T615, I hurriedly ran out to the museum’s T615 and T700 and thought…what if I showed the Autopian community the future that Tatra actually gave us? So, let’s snap back to reality (ope, there goes gravity). Here’s a quick tour of The Lane Motor Museum’s (that’s where I work) 1996 Tatra T700, one of the last 75 passenger cars to come off the line in the factory in Příbor, Czech Republic.

First, a bit of background. The Vignale-designed T613 was introduced in 1975, and after the fall of Communism across Europe in the late 1980s and early 90s, the 613 was thought to be too primitive to attract Western buyers. Tatra was evaluating two approaches to a new, proposed Project T-625: a front-engined, water-cooled sedan, or a more traditional, rear-engined, air-cooled option. Unfortunately, Czechoslovakia’s “Velvet Revolution” of 1989 left many state-supported industries without clear direction – Tatra included.

With Project T-625 shelved, Tatra enlisted British designer Geoff Wardle to freshen the T613 into the T700. The prototype was produced at the Příbor factory in 1995, and it was introduced to the public in 1996, in six variations. You can see the differences between the T613 and T700 in the image below; notice the smoother lines and a revised front end:

More changes were evident in the engine. The first fifteen T700s were built with a fuel injected 3.5 liter engine, but the last 14 cars were even more special, with a displacement of 4.3 liters, forged crankshafts, and chemically treated cylinder bores. These last few passenger cars Tatra produced rewarded the driver with 230 HP and 360 lb. ft. of torque. It was said that a “regular” car might take 3 ½ hours to cover the 350km from Prague to Kopřìvnice, but the over two-ton Tatra T700 was able to cover the distance in under 2 ½ hours! I suppose that after the fall of communism, the newly formed Czech Republic didn’t have any kind of highway patrol officers, because that sounds like Tatra engineers were haulin’ ass! 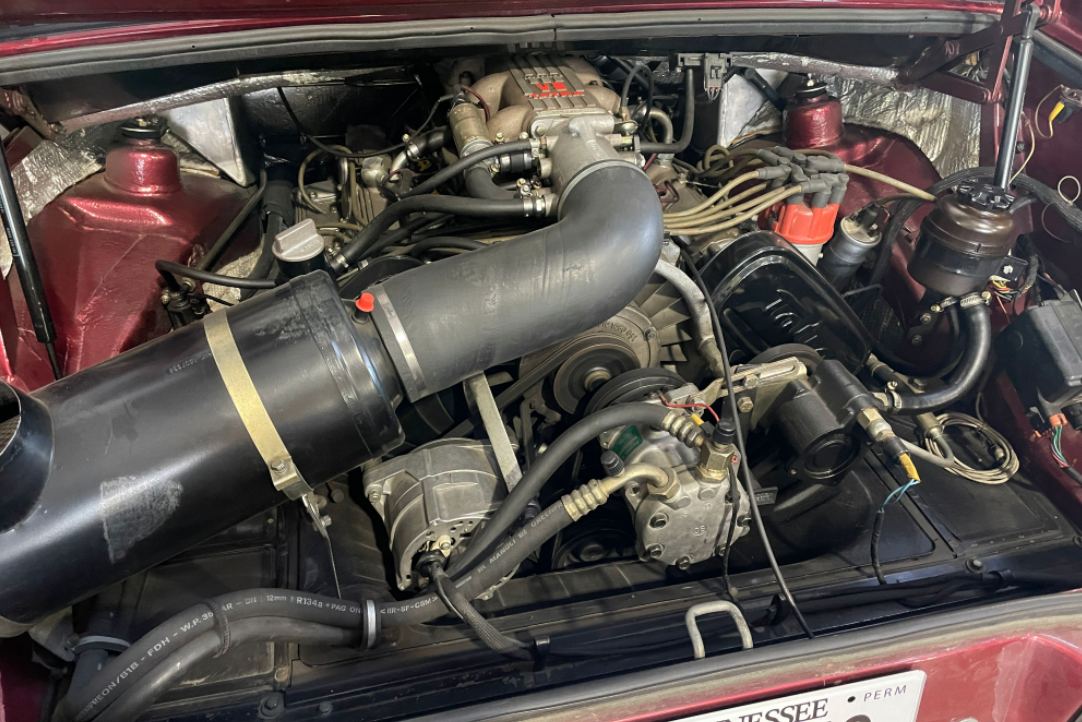 While my personal opinion is that the earlier T603’s have a throatier exhaust note, this short video does give you an idea of what an air-cooled V8 sounds like. My apologies that I couldn’t shoot the video and rev the engine at the same time.

Much of the rest of the exterior was basically carried over from the 613, as you can see here: 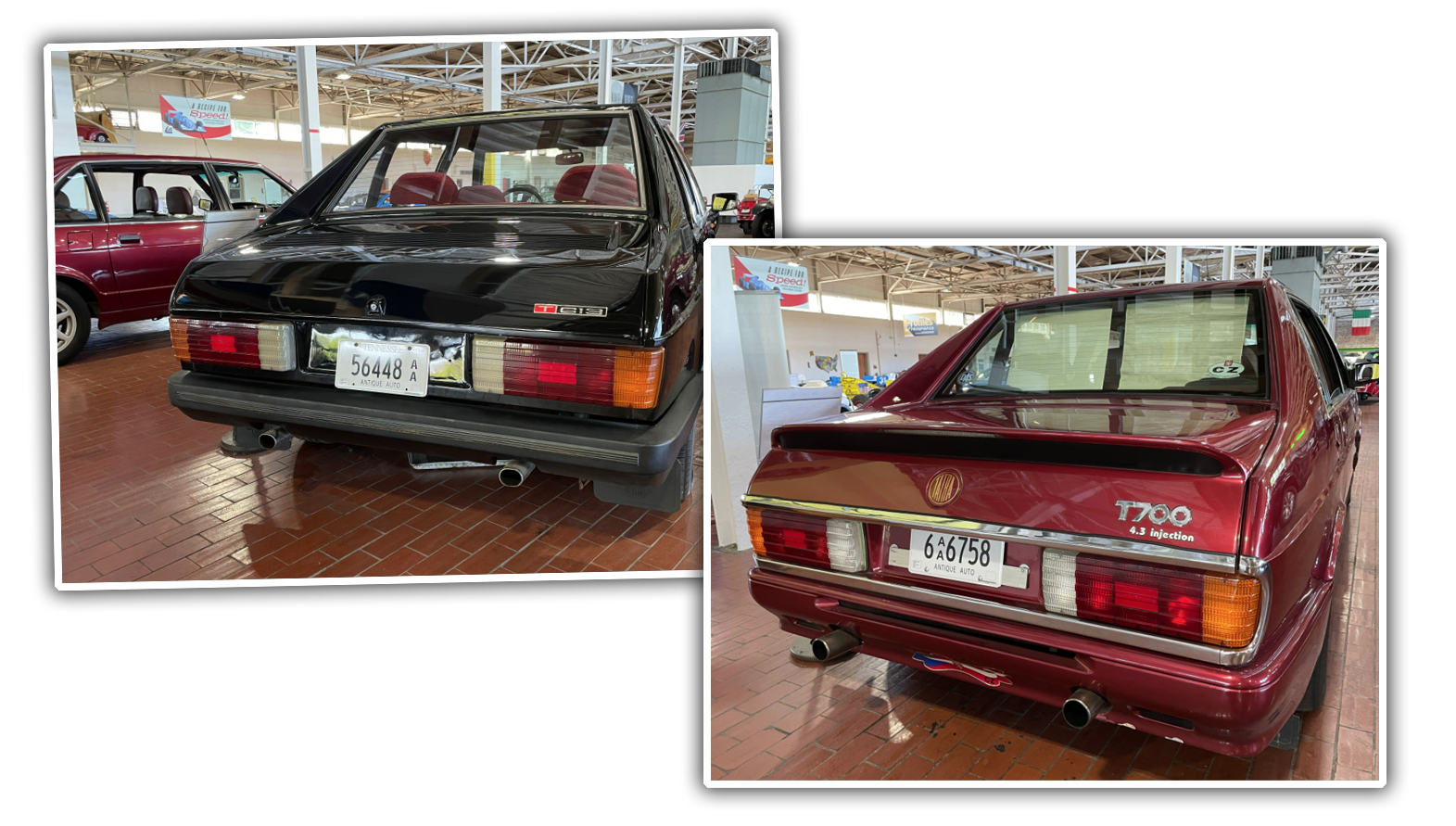 Let’s head inside, where I think the interior has a quite a few nice touches.

Look at this lovely wood steering wheel. I don’t know if this standard equipment, as I’ve see alternate plastic 1990s steering wheel, but I just love the feel of it. 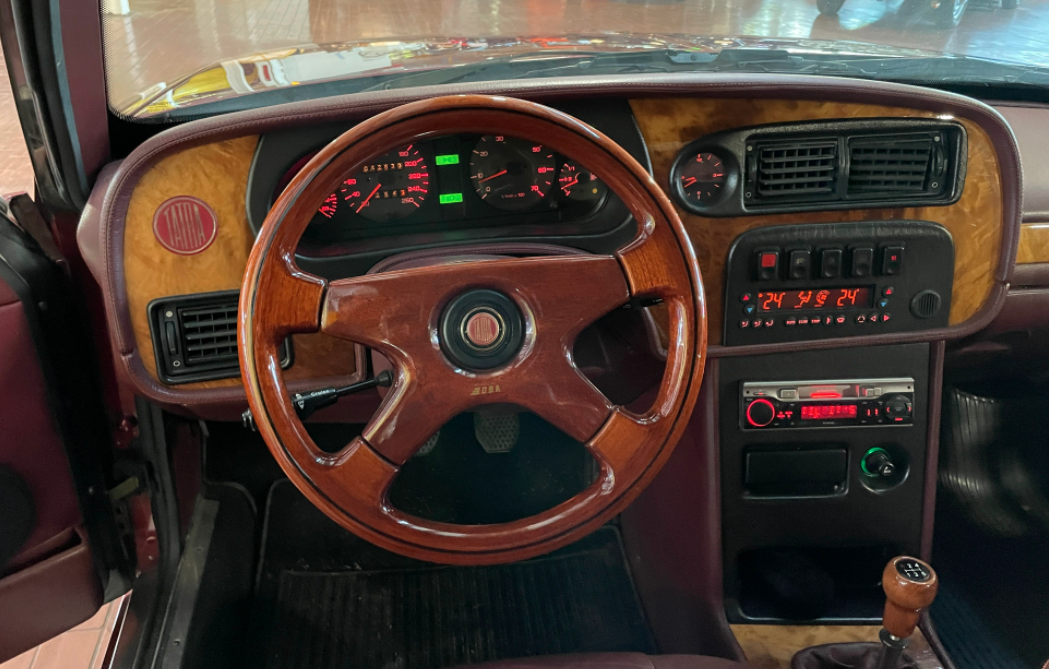 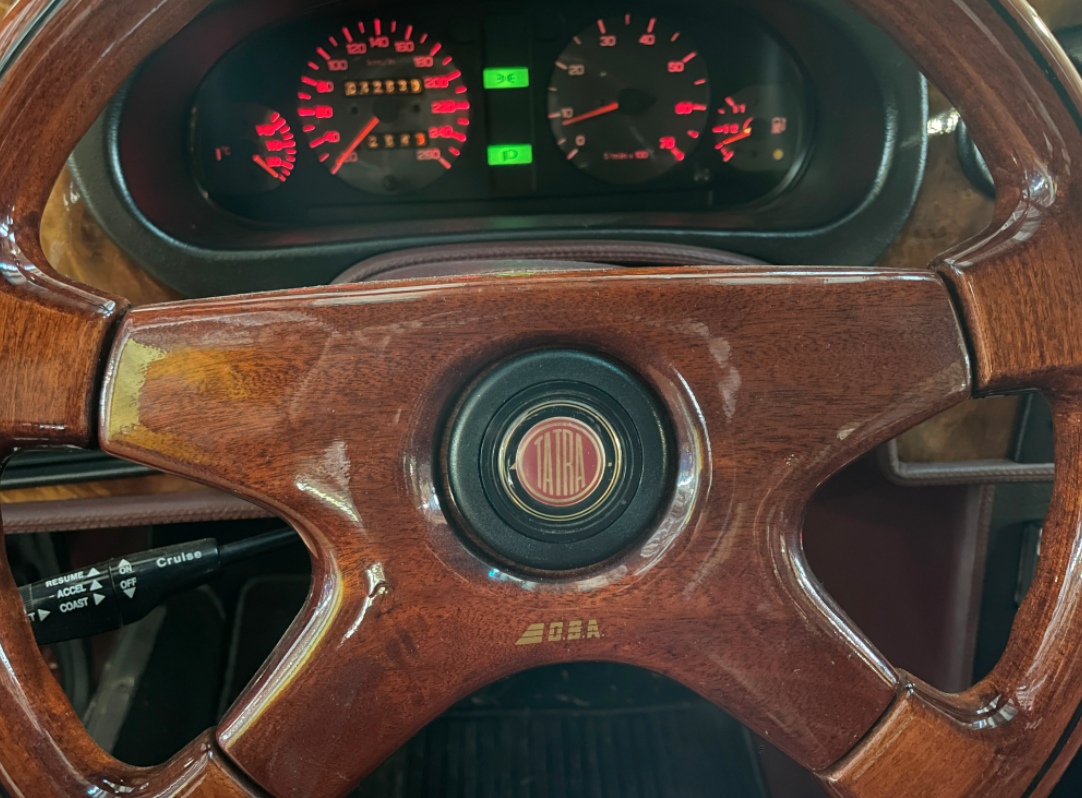 The automatic climate control works….okay. It’s in Celsius, of course, so if you’re an American driving a T700, every time you want to get comfortable, you’ll have to do math, just as your high school teachers warned you about. 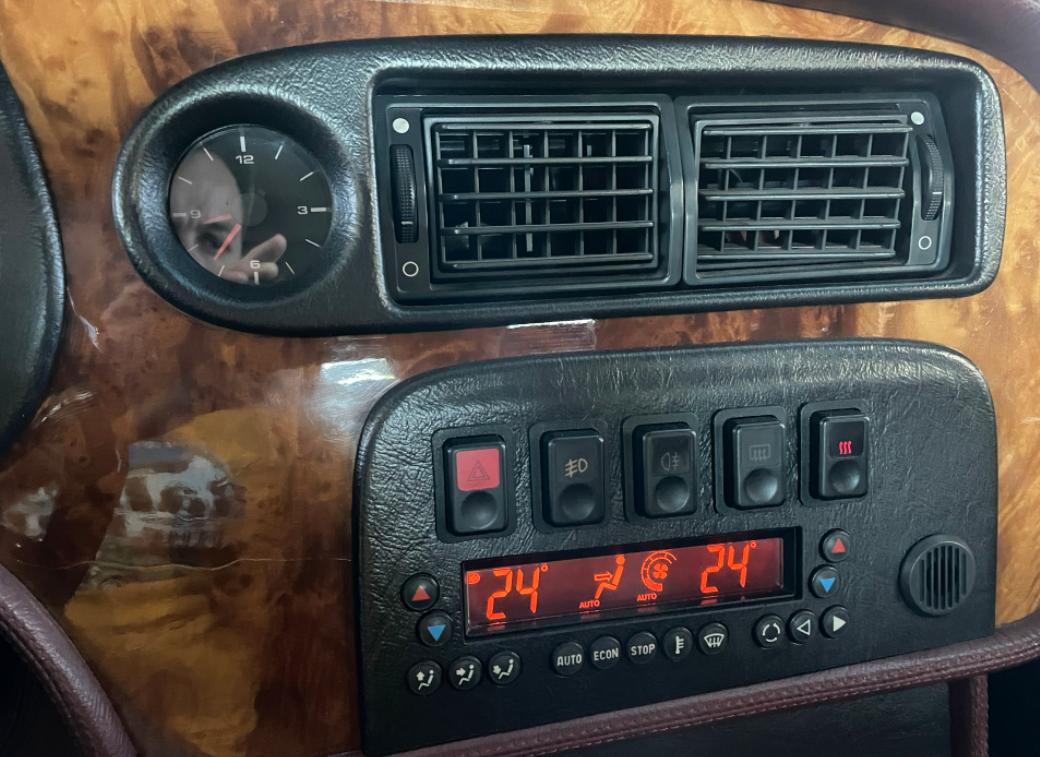 It’s got a fairly smooth five-speed manual. Pull up on the ring to get to reverse. 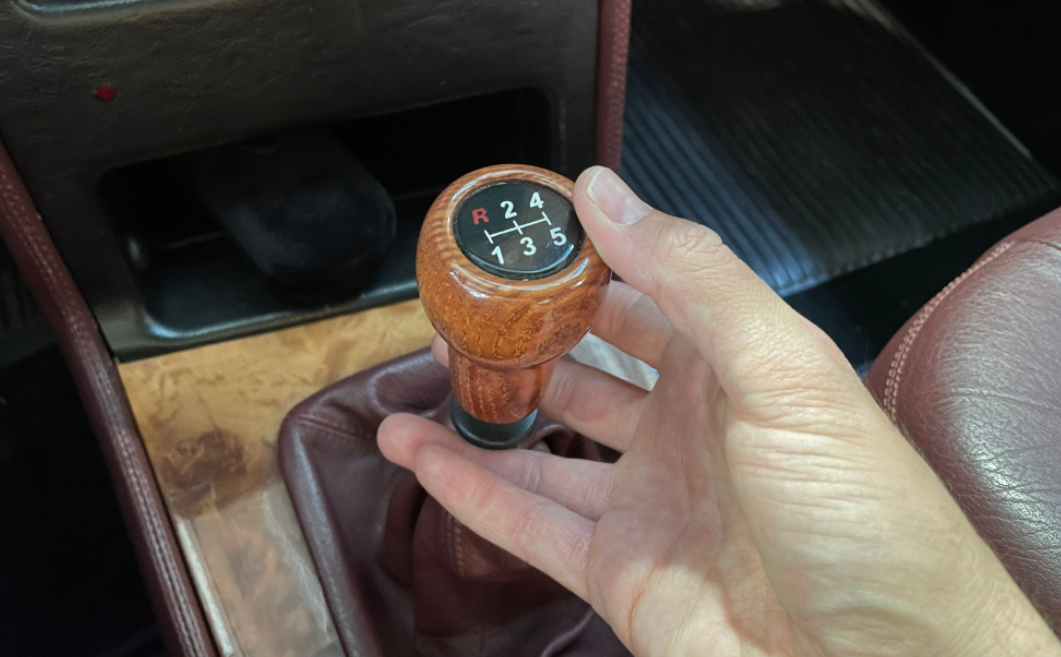 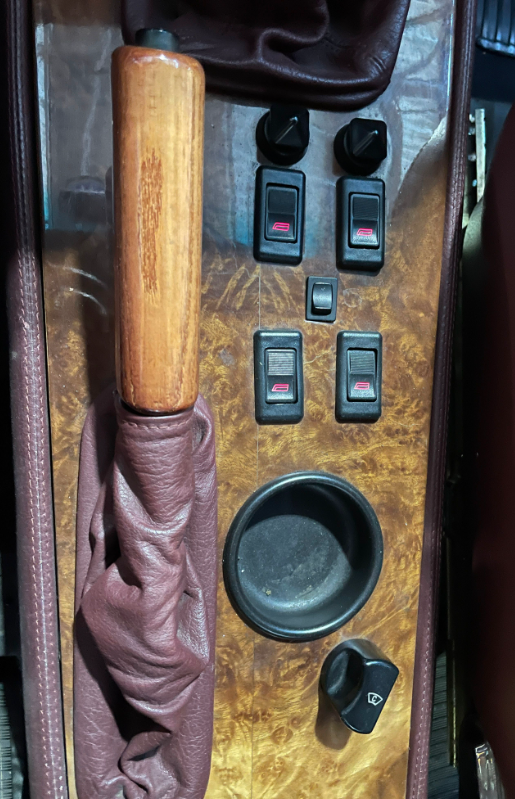 [Editor’s Note: Rear-engined Tatras are some of my favorite cars, but that may be one of the worst cupholders I’ve ever seen. It’s got just enough depth to lull you into a false sense of drink security, but I guarantee that first turn will end up with your crotch lavishly soaked with piping hot Fanta or whatever you people drink – JT]

The front seats are very comfortable, nicely bolstered with fabric inserts, but oddly, with manual adjustments. My US market 1995 Jaguar XJ6 had power seats. [Ed Note: Nice flex, Rex – JT] Again, most likely a carryover from the 613. 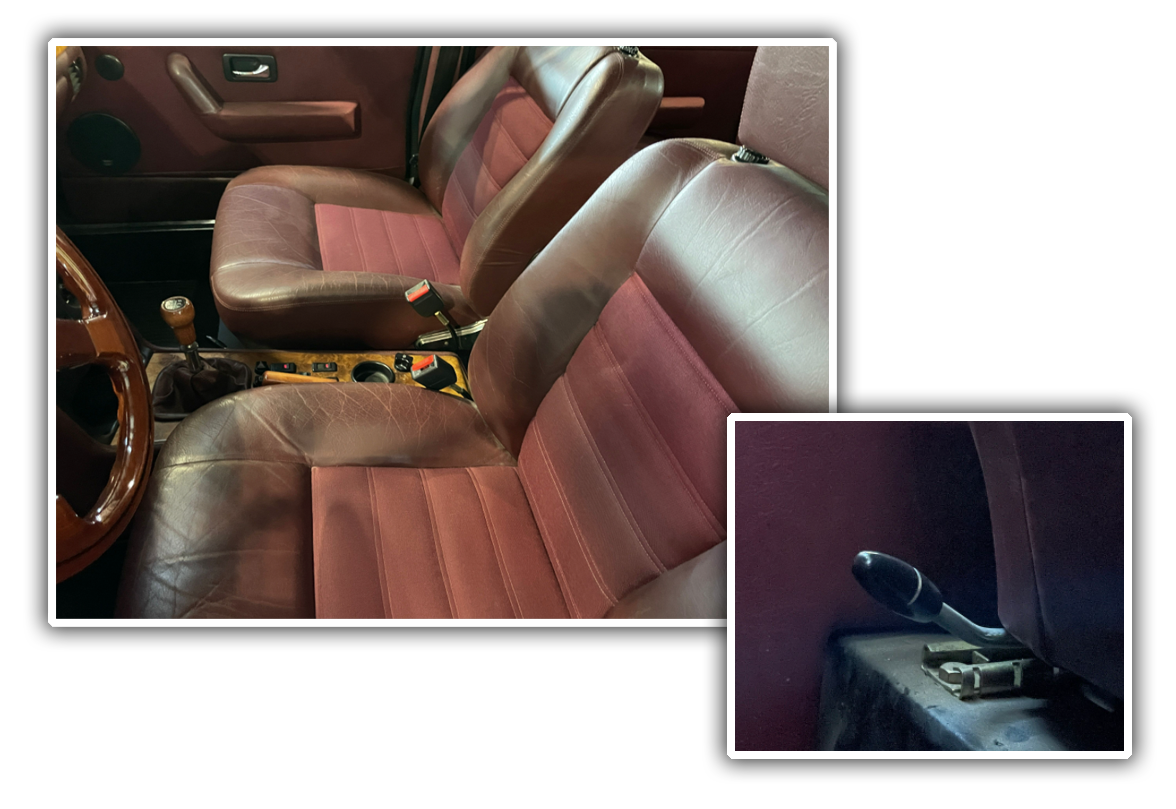 Auto-dimming rear-view mirror with map lights, with a view of the overly upholstered headliner. 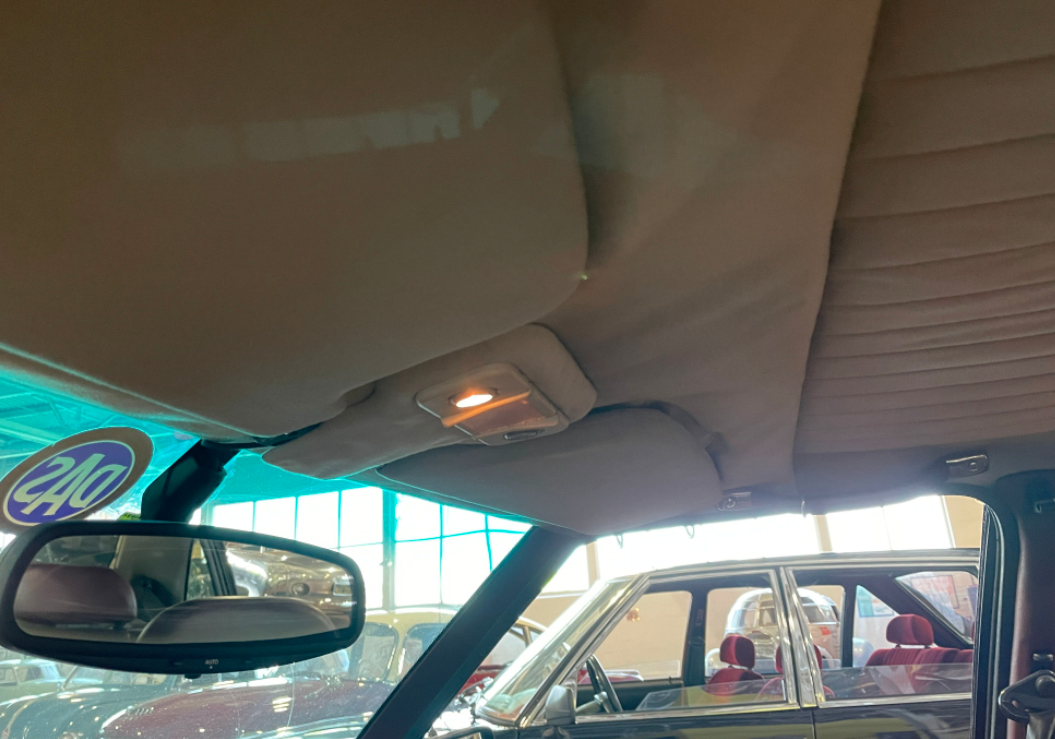 The rear seats are comfortable as well, with manual rear pull-up sunshades and 1990s-standard door ashtrays. 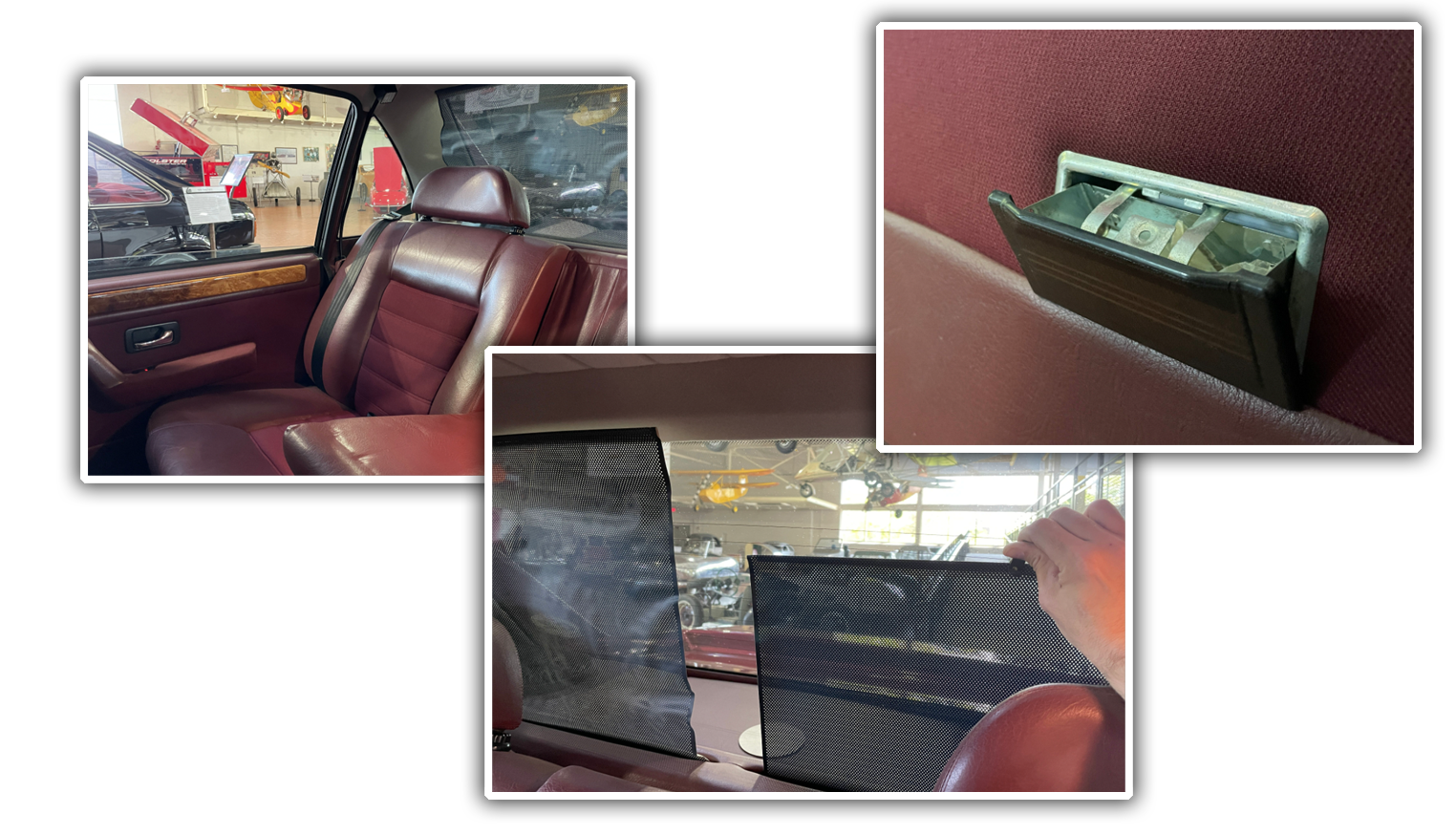 Also an interesting feature, this reading lamp for the rear passengers. It very much looks like something that was bought at the local Czech version of Staples as an afterthought. There’s a toggle switch on top of the lamp. [Editor’s note: This is absolutely absurd. Did Tatra really not route the wiring underneath some pillar trim and have the light be integrated into the headliner? Is it really a flexible-neck reading lamp just exposed like that?? Good lord that’s a hilarious afterthought. -DT]. 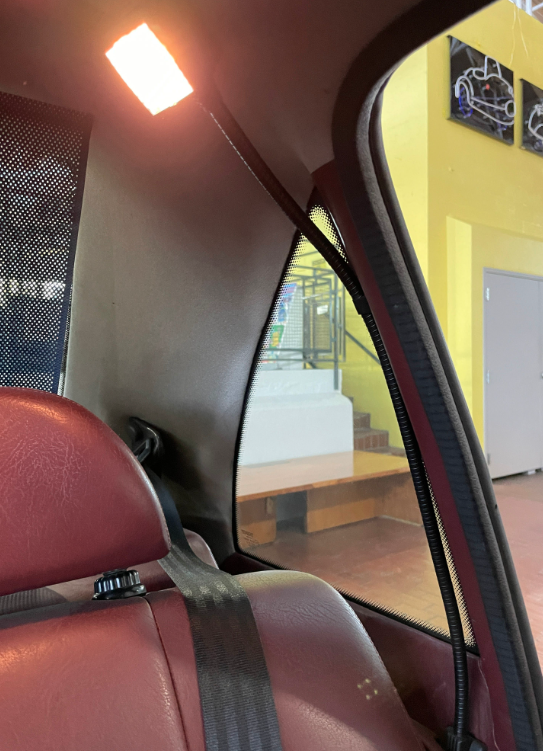 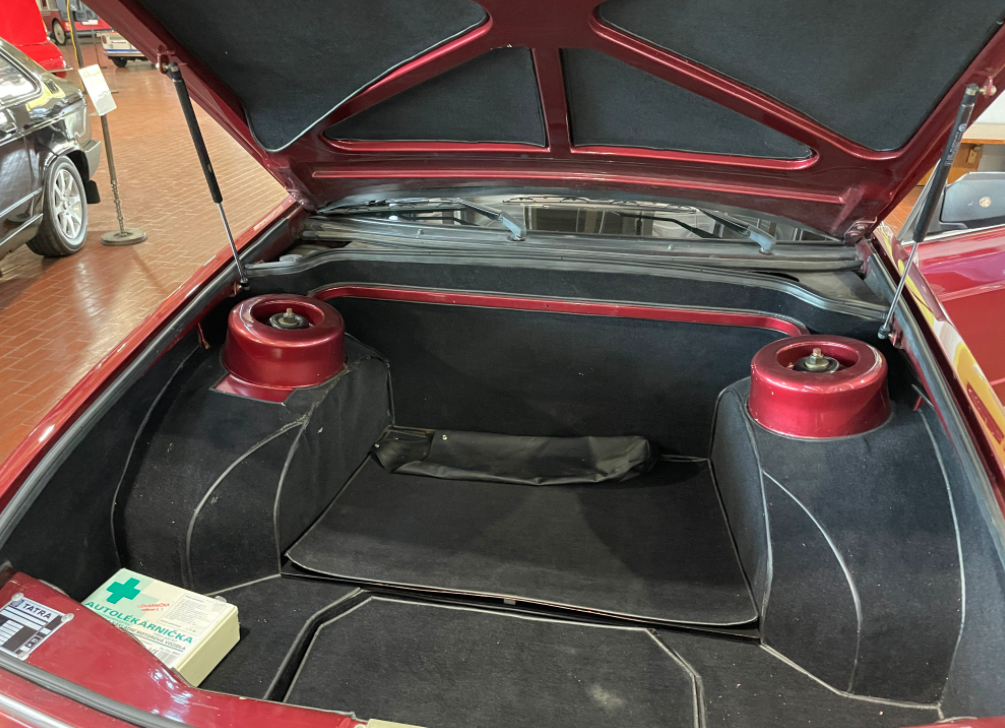 We at the museum have always thought this is either one of the last 75 T700s off the line, because of the 4.3 liter engine option, but the VIN plate, located over the front left headlight buckets, lists the last three digits of the VIN as “003”. 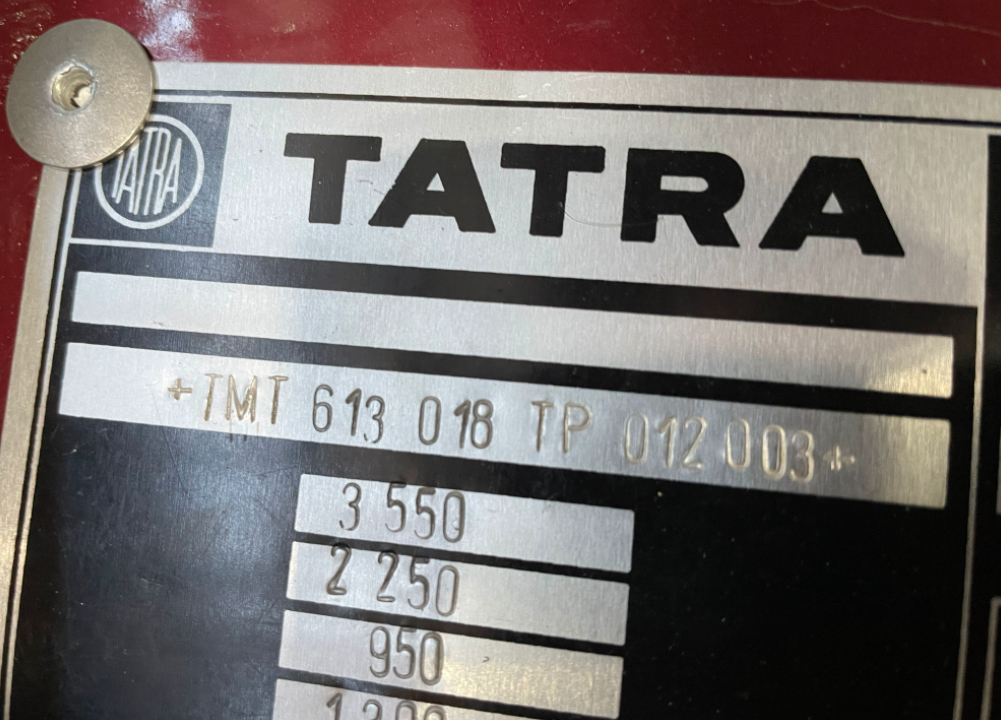 So, this particular T700 is either of the first, or one of the last. The registration (in Czech) isn’t really clear, so some more digging needs to be done.

A much-needed front axle redesign was on the drawing board when Tatra pulled the plug on passenger car production. Heavy commercial and military trucks are still produced by the factory (the museum has a 1994 T815 Rollback too) but sadly no one will never know what interesting passenger cars might have come from the inventive minds of Tatra. Well, except for the Bishop of Automotive Arcana.

Hopefully you enjoyed this look at the rare Tatra T700, the last of the great air-cooled wonders from your favorite Czechoslovakian automaker.

In addition to the T700, I grabbed a few shots of our Polski Fiat 126 Bis’s engine under its cargo area, as well our Fiat 500 “Camioncino”’s engine placement, to highlight their engine packaging that Jason mentioned. [Editor’s Note: Rex is referring to my love of cars with their engines set under the floor, at the rear, which I do indeed love. – JT] 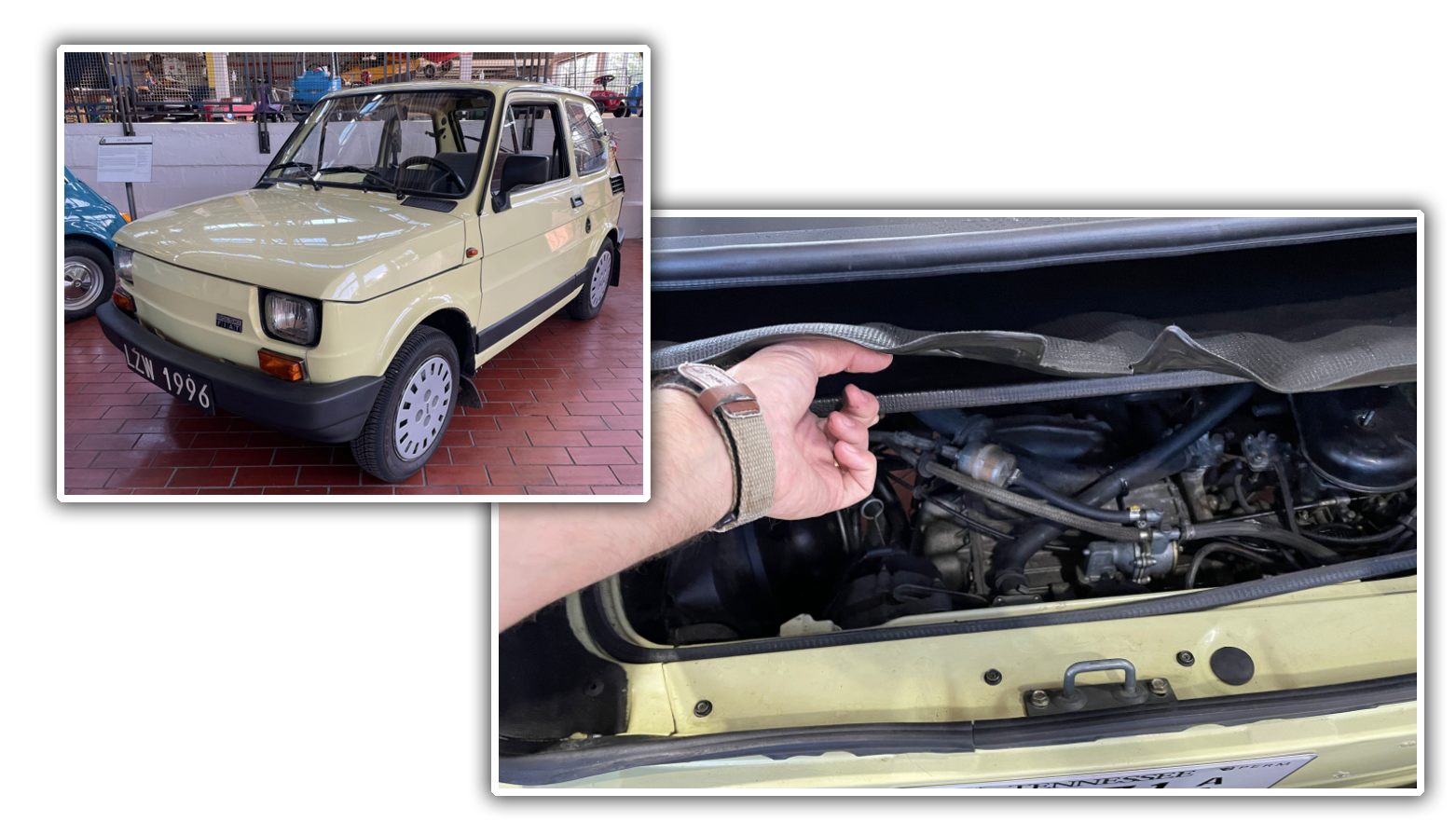 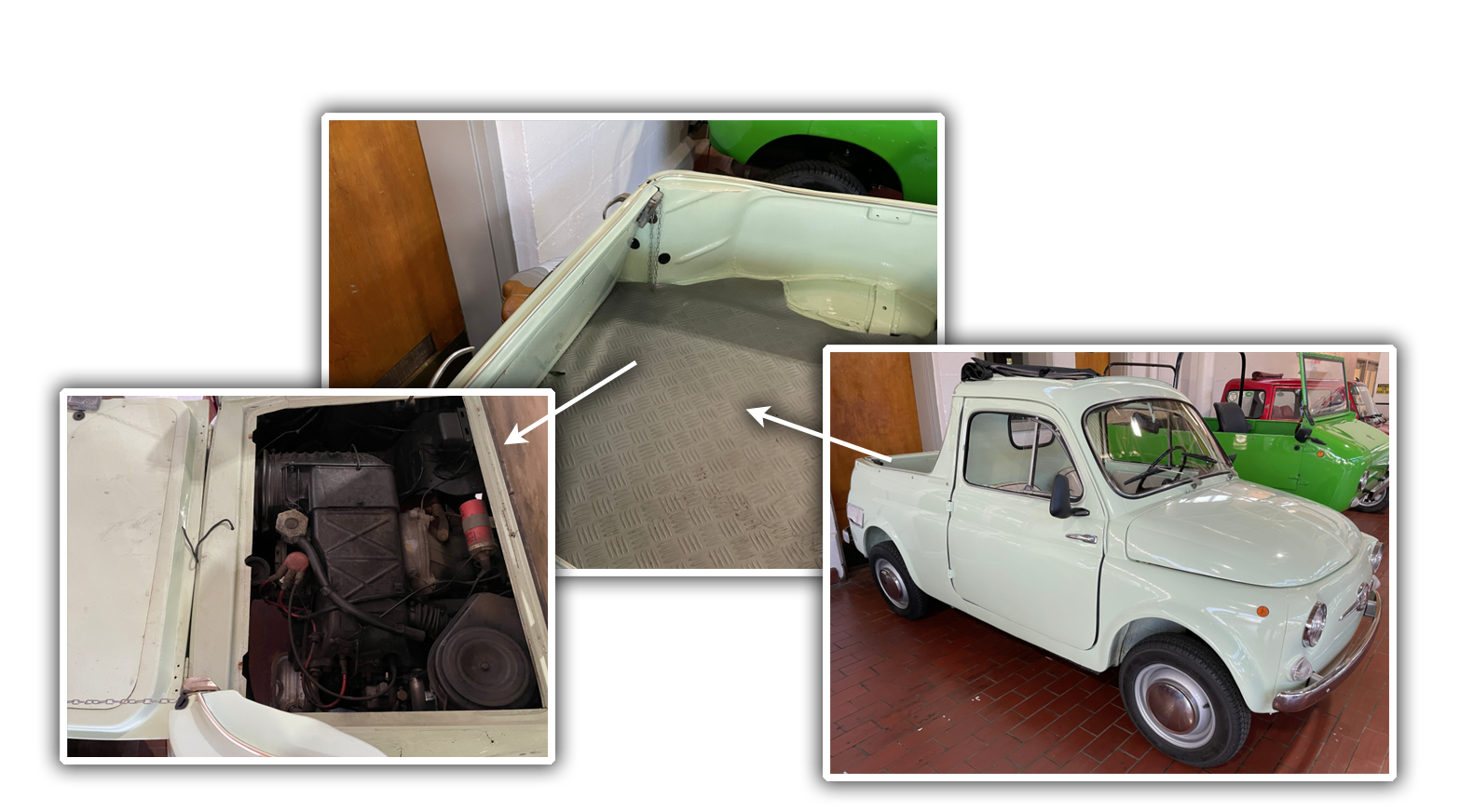 Read All My Posts »
PrevPrevious1962 Ford Fairlane or 1957 Imperial: Which Heartless Hulk Would You Find An Engine For?
NextToyota Has Officially Revealed The Manual Transmission Toyota Supra. Here’s What We KnowNext