Happy Friday, Autopians! As usual, we’re going off-script today, but only a little: one of today’s cars actually fits within our normal budget. It does not, however, fit within anyone’s idea of a normal car, nor does its competition. I’ll show you what I mean in a minute, but first let’s see how our beater hybrids did:

That’s a bit surprising, actually. I would have guessed the Prius’s reputation would have counted for more. For me, I think it would come down to how they looked/felt/drove in person, but really, if I went the hybrid route, I’d probably hold out for a one-generation-older Civic, or original Insight, with a manual.

It’s almost a cliché at this point: “Never buy someone else’s project.” But if you think about it, every car is someone else’s project, even a new one. No vehicle is exactly what you want at the moment you buy it; it is always someone else’s idea of what it should be. Often you can choose to live with something you don’t like instead of improving it, but there is always something you’d have done differently if it were up to you. That’s the great thing about rough half-finished projects: it is up to you. Sure, they might need some backtracking to get them pointed in the right direction, but it is easier than starting from scratch.

Today’s projects are both pretty far along, but still need a lot of work to get them ready for their close-ups. One is a replica of a nearly 100-year-old race car, and the other is something George Jetson would drive, if it flew. Ready to dive in and have a look at them? Here we go. 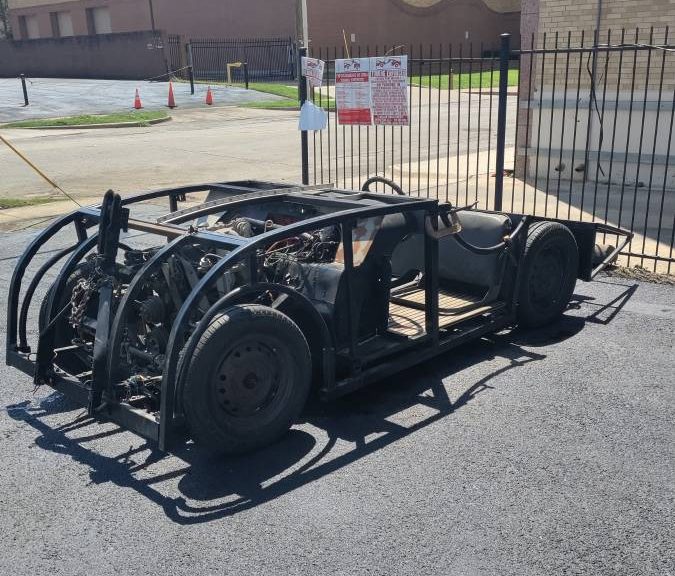 As soon as I saw this thing listed for sale, I knew I had to use it somewhere. What you’re looking at is a Triumph TR4 frame with what I’m pretty sure is a Ford 2.3 liter “Lima” four-cylinder in it, with a body shape roughed out in square steel tube. That body is meant to be a replica of the the Bugatti Type 32 “Tank,” a very early attempt at streamlining raced in 1923 with limited success. It’s an iconic shape, but just in case you’ve never seen one, here is what it’s supposed to look like:

Not the prettiest thing on four wheels, but it’s famous, and a replica of it would certainly get attention. Unfortunately, however, if you compare the above image to what’s going on here, the shape isn’t right. It’s close, but the cowl is far too high, and the shape of the nose is all wrong. It might still be called a tribute to the Type 32, which would be cool too, but I think you’ll be cutting and re-welding some tubing to get it closer to being right. 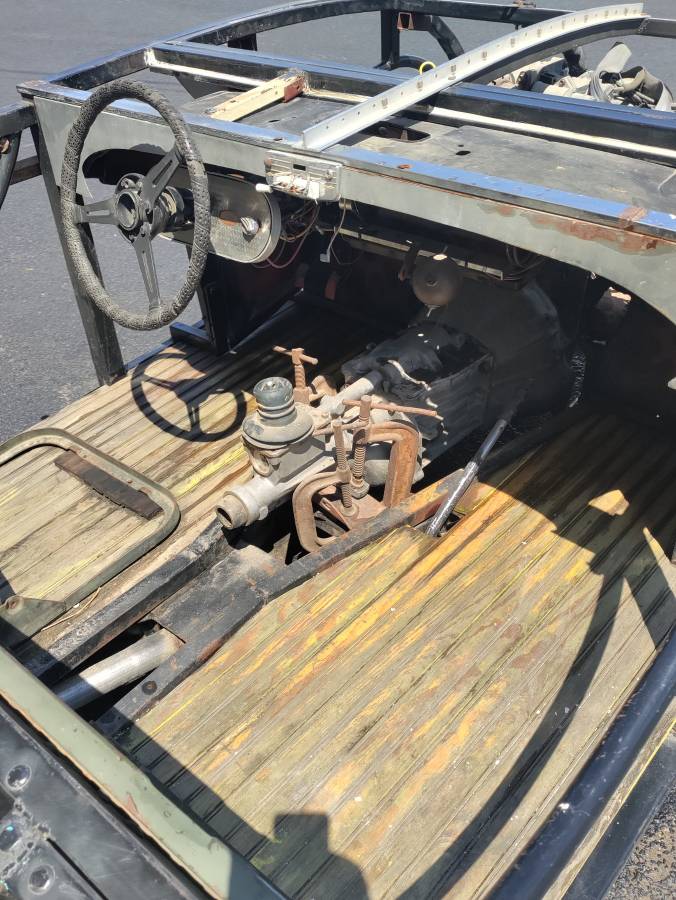 There is a lot going on in these photos, and not a lot of it makes sense, but let’s see what we can parse out. The Ford engine and what I’m pretty sure is a Mazda-built five speed manual appear to just be sitting in the frame, held in place by C-clamps and ratchet straps, so if you wanted to go a different way with the power, you could do so without much more work. The original Bugatti had a two-liter straight eight, for which no likely stand-in exists, but a Triumph inline six out of a TR250 should bolt right in, if you can find one. 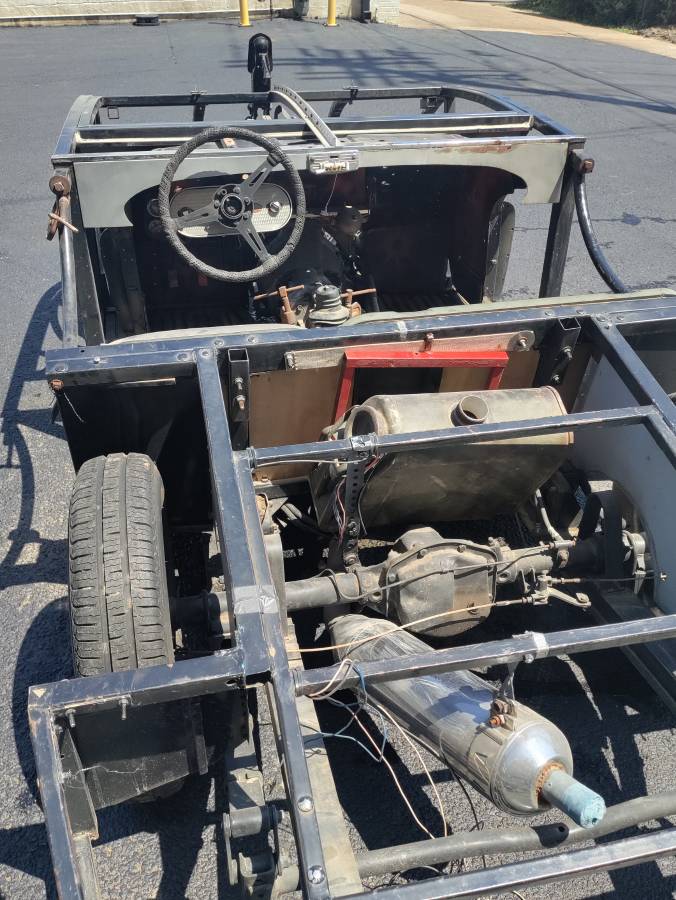 The entire body appears to be a bit too wide as well, probably even wider than the stock TR4 body. And I don’t understand what’s going on with that enormous muffler. The whole thing just seems a bit sketchy; Mercedes Streeter referred to it as a “steampunk death kart” when I posted the ad on Slack. It might be less daunting after you see it in person, talk to the owner, and start to get a sense of their vision. But from the photos, it’s a little scary. 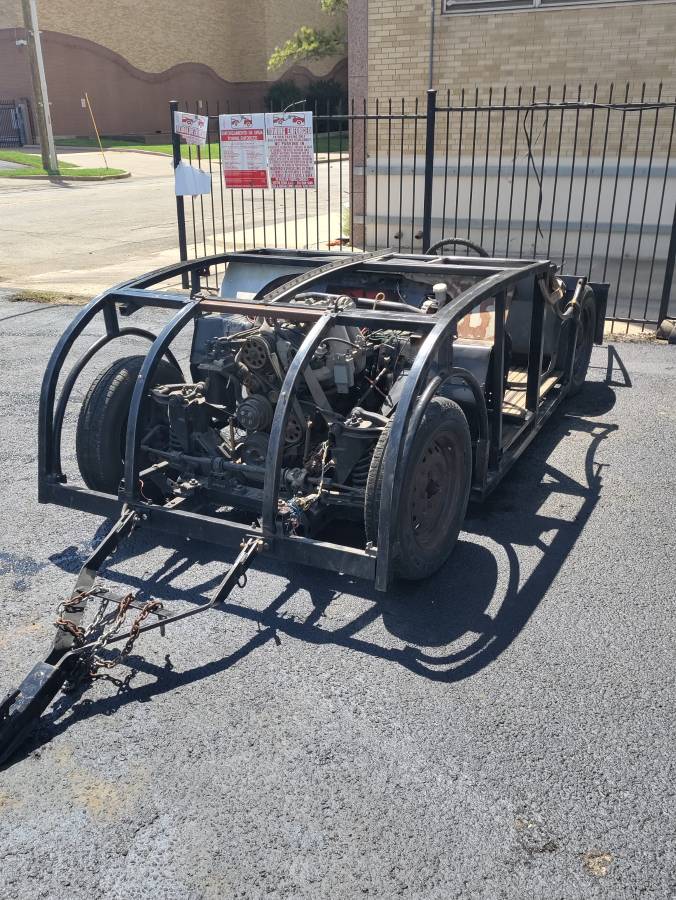 The seller says it rolls, and has it set up with a tow bar in front; I’m guessing it has been moved around many, many times over the years. It also does not come with a title, but once it’s completed, you could probably title it as a constructed/kit car in most places. 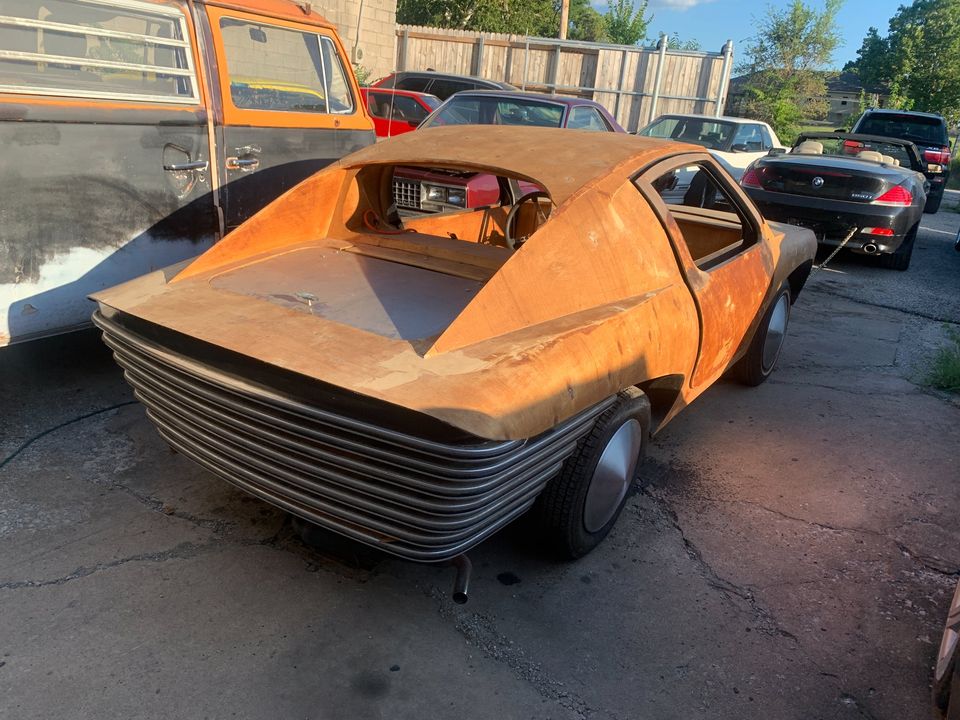 Runs/drives? Nope, but it’s all there

This vehicle made the rounds of the Opposite Lock forum about a week ago, and when I first saw it, I didn’t much like it. But the more I study the shape, the more little details jump out at me, and the more I can see where the builder was going with it, and what it might look like when finished. And I dig it.

The story goes that the builder of this car was a cabinetmaker, who passed away before he could finish it. Like so many kits and homebuilts, this one rests on a VW Beetle chassis, shortened somewhat by the looks of it. Power comes from a 1600 dual-port engine, and the car appears mechanically complete. The seller says they haven’t tried to start the engine, but it turns over by hand. 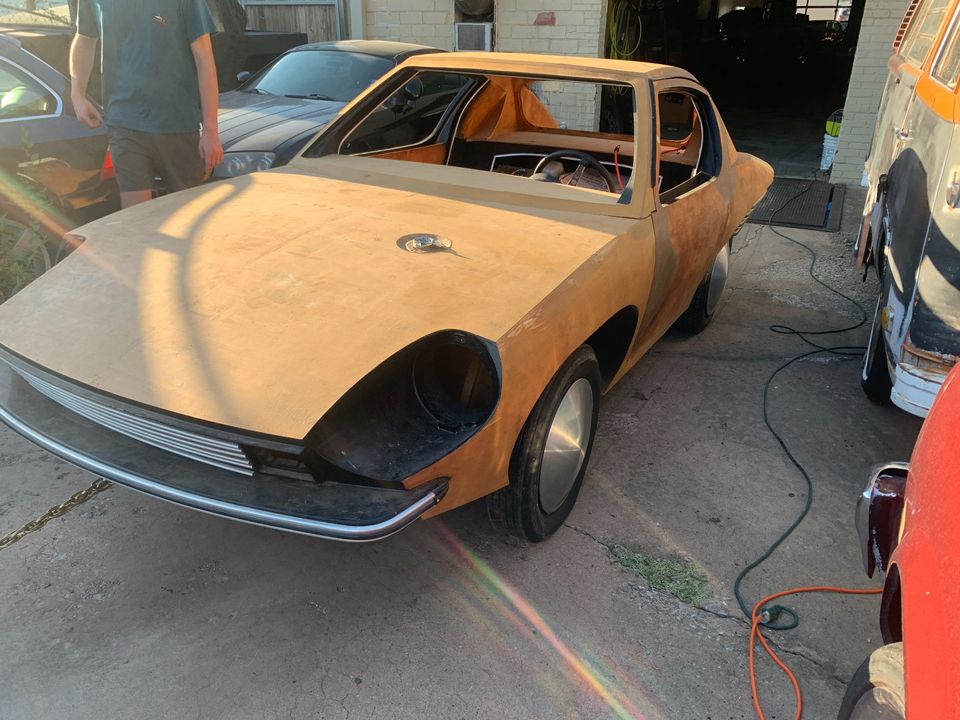 The design details of this thing are just astounding: the Ferrari- or Corvette-like buttresses of the rear pillars, the wheel arches which Adrian Clarke pointed out are very Marcello Gandini-esque, but also make me think of some of Raymond Loewy’s sketches, and that massive tubular rear bumper/valance that looks like a Harley Earl fever dream. If anything falls flat, it is the nose, which is too Datsun 240Z-like to go with the rest of the car. Maybe if they kept the headlight position and deep buckets, but swept the underside of the nose upward like an AMT Piranha, it would not look so derivative. 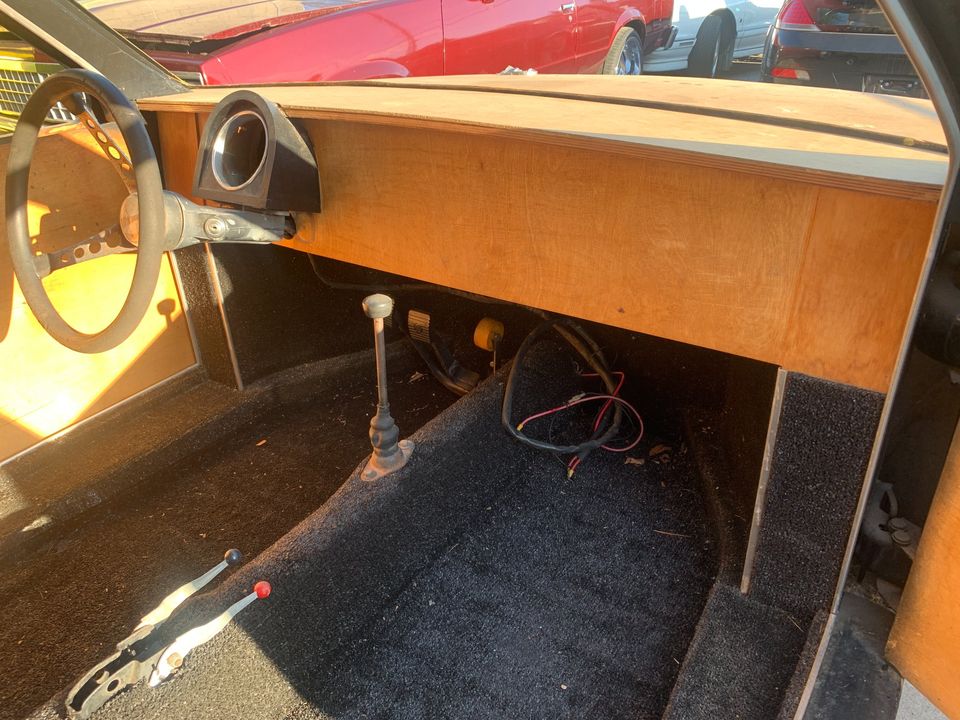 I can’t help but wonder if the intent was to use this wood body as a buck to form a fiberglass shell, or if this was “it.” There’s a lot of filler on the wood, so you couldn’t really do a woodgrain finish, but it’s smooth enough to take paint. The dash and door panels would look great if you left the woodgrain showing, and highlight the fact that the rest of it is made of wood. 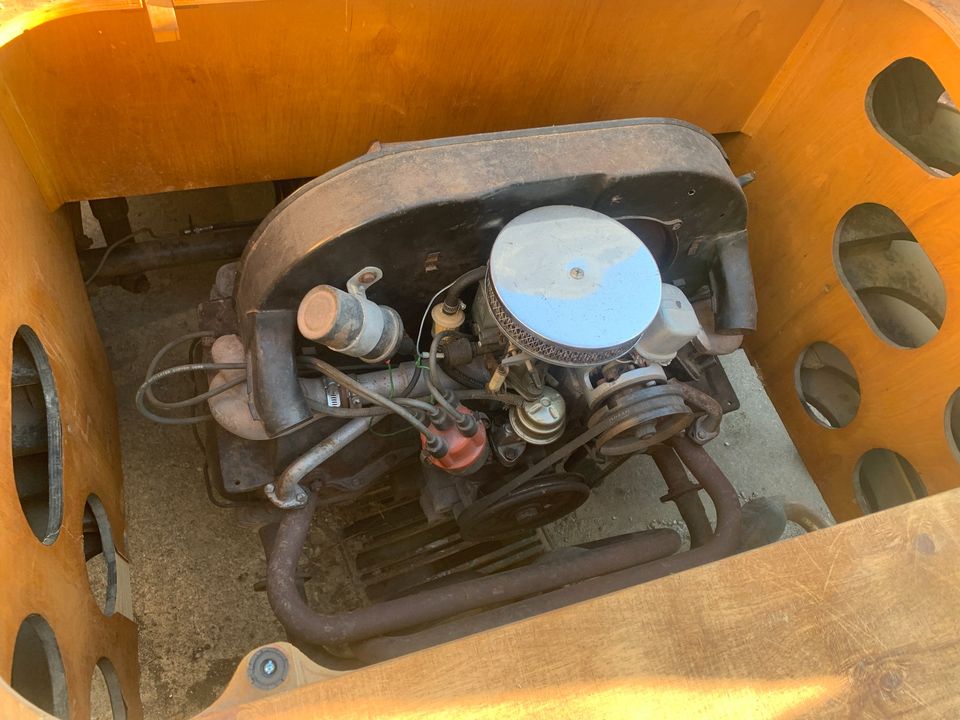 This car also demonstrates the genius of using the Beetle as a basis for custom cars: the whole powertrain is self-contained; just give it some holes to breathe and it’ll keep buzzing along, like a firefly in a jar.

[Editor’s Note: I think this wooden VW-based thing is fantastic. That’s all. – JT]

Building your own car is a massive undertaking, and I have to applaud anyone who ever gets past the thinking-about-it stage. Both of these cars represent massive amounts of creativity and effort. One appears to have been abandoned and one was widowed, but it would be cool to see them both finished up. Which one are you taking on?