Facebook-f Twitter Instagram Rss
Menu
Menu
Home » Would You Sleep In An RV Made Out Of A Hearse?

Would You Sleep In An RV Made Out Of A Hearse? 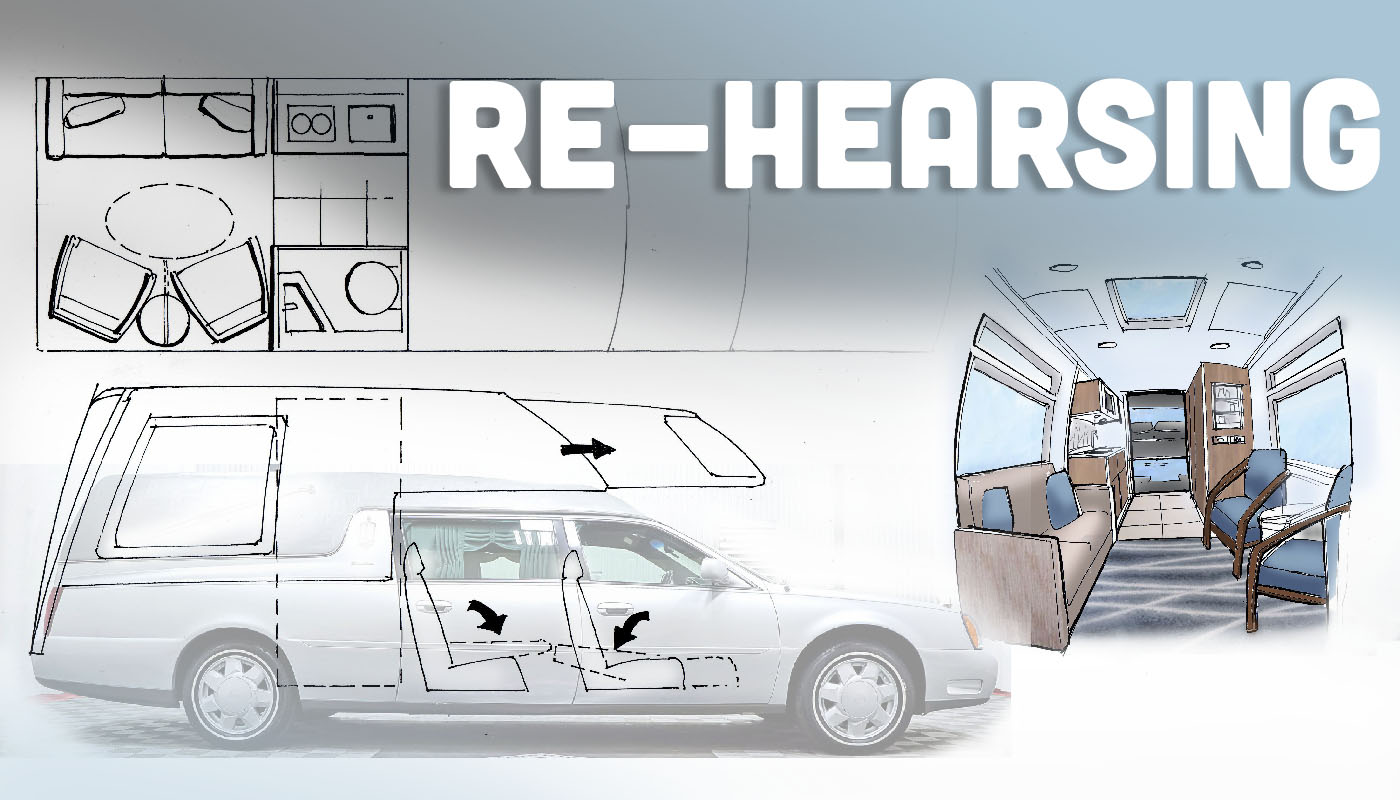 There appear to be a lot of camper fans here among the Autopian staff and our dear readers. It’s easy to see why. During the pandemic everyone seemed to want to hit the road and get out in their own self-contained mobile space, and the market continues to explode for motorhomes of any kind. It’s hard to believe that northern Indiana, the epicenter of motorhome manufacturing, was an area with nation-high unemployment issues a decade ago. Now it’s booming, which is good news for them, but not so much if you’re in the market for one of these things.

You might already know this, but they don’t exactly give these things away. A modern motorhome ranges from $60,000 to more than $150,000 new (Matt called the one above a good deal at over $100k), and even the used route is still insane. You’ll have to pay a seller more than what they shelled out for their camper new three or four years ago to pick it up. ‘Affordable’ examples will likely be things you will want to avoid, like these: 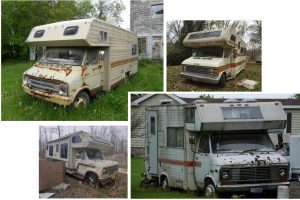 Is there a solution? Possibly. What if you could get a handcrafted luxury vehicle big enough to make a small camper with low, easy miles on it for cheap?  Say $7,000-$20,000 for a great example? Then you add a special fiberglass shell and interior fittings for around $10-15,000, paint the thing (maybe) and hit the road? Too good to be true?

I mean, it MIGHT have the souls of the dead still living in it, but that’s a minor issue, right? [Ed note: I’ve actually seen someone do this before, but it was explicitly creepy – MH]

The base vehicle for this motorhome exists in the tens of thousands. Good examples of this machine end up on the market typically when funeral homes sell them after six or seven years. Wait… funeral homes? Yes! It’s based on a hearse. I know, I know, but hear me out.

Hearses are typically very well-built vehicles, hand fabricated and sold new for over six figures in many cases. They are designed to carry heavy caskets with potentially heavy cargo in them. These are not Hertz rental cars. Instead, they are usually driven very slowly and gently and kept in pristine condition. They are large and spacious and will drive and ride like a stretched limo. You’ll look long and hard for a more comfortable vehicle.

However, as used vehicles there is, well, a stigma to something that carries bodies in it. After they are retired, there is a limited market for these things and it doesn’t seem to be growing. Some will go to Funerals-R-Us second rate mortuaries. According to our own designer Adrian, the idea of goths driving hearses is now ‘too cliché, darling,’ as hackneyed a stereotype as reading poetry about pain in a graveyard. How many tattoo parlors are left that need mobile signs? Not a lot. It’s no wonder many of these things are left to rot, get crushed, or end up in demo derbies. Fun as that last one sounds it’s a sad fate for a product of what is likely the last bastion of artisan coachbuilt gas-powered vehicles still left. 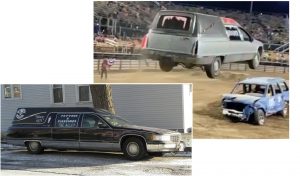 Presenting the Peaceful Rest Camper (I will refrain from the most obvious hearse puns here, but there is a comments section below so go nuts, Autopians). The concept is to throw a Sawzall at a retired hearse at strategically planned places and add the new structure in back.

The idea of adding a fiberglass camper to the back of an existing vehicle is not new. Of course, there are the ones that fit in pickup beds, but I am thinking more about the ones that fit into the backs of SAABs with the rear hatch removed. Mercedes Streeter has reported on these Toppola campers before. Well, this is a Toppola for big Americans, designed for a vehicle used to transport dead Americans.

There are also three or four primary hearse manufacturers so making compatibility kits would likely not be as big an issue as you might think. 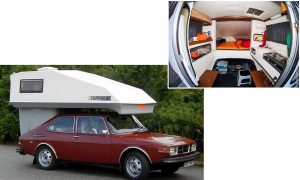 Since it’s obviously a bigger vehicle than a 900S, you have more to work with. There is space in back for a facing couch and two lounge chairs, with a fold down table. Next to this is a kitchenette area with sink, burner and microwave above. Behind this is a VERY tight ‘wet’ bathroom, that RV trick for tiny campers where the whole space with the toilet and sink becomes a shower. The skylight shown would likely be filled with roof air conditioning on most units sold. The cut lines in the ceiling are for fold down monitors; four people would need to watch two synchronized screens. Yes, this is a wide angle sketch so the space is a lot tighter than it looks. 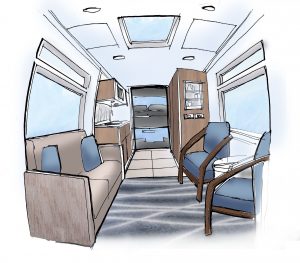 The fiberglass structure continues over the front roof area to create a sleeping area which is not very tall but not as confining as… I’m trying not to say a coffin, but it fits. I don’t like the idea of this thing extending over the windshield blocking your view of Mt Rushmore or stoplights, so it could slide back in when not in use.

What is nice, though, is the configuration of the front passenger compartment. A rear seat would be installed, so this thing would be great for family traveling and sightseeing. It could work as a five or six passenger sedan when not camping, and a luxury sedan at that. If you fold the rear seats down and recline the fronts, you end up with a giant additional sleeping space (maybe primary space and leave the kids upstairs). 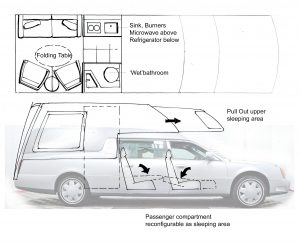 source: Park Superior and The Bishop

Would I be creeped out by owning an old hearse? Possibly, but some much of the original vehicle is either gone or covered up so I know that shouldn’t matter. Plus the cargo in these things was already dead; their souls had departed them before being transported in what you’re using for a camper. At least that’s what I’ll tell myself.

Biggest issue, I think, is likely to be weight. It might need to be the kind of camper that needs to be ‘on the grid.’ Mercedes Streeter has looked at this thing, and after she stopped laughing she said that to be fully self-contained we would likely need to have 20 gallons of fresh water and an equal amount for grey water, and while there is room under the floor for that the weight of 40 gallons is a lot. You would need to beef up the rear axle, which might not be too tough in this front wheel drive vehicle. Would hate to have to go dually, but we could; remember these aren’t driven axles in this era of Cadillac.

I am not an engineer but I know that these issues could be resolved. Hearses really deserve to be ‘upcycled’ and live a second life as a fun vehicle. With the current market for motorhomes, if you think people aren’t going to be looking at alternative choices, you’re dead wrong.

Sorry, I had to get just one in.

Read All My Posts »
PrevPreviousSketchy German Drop-Tops: 1990 VW Cabriolet vs 2004 Audi A4 Cabriolet
NextThe 2024 Maserati GranTurismo Has A Twin-Turbo V6 Because Not Everyone Wants An EV GTNext