Fall is here and winter is right around the corner. For many RVers, that signals that the end of the season is near. But for the industry making and selling RVs, things are only heating up. America’s largest and most popular manufacturers are putting on a humongous trade show called the Open House for customers and dealers. And beginning today, I’ll be right there in the action, checking out the latest, greatest, and weirdest in the new RV world right now.

RVs have seen a massive boom during the pandemic. Many vacation destinations shuttered while other popular methods of relaxation like cruise ships prove to be petri dishes. In spite of the challenges, Americans still want to get out and have fun, so an incredible amount of people turned to hitting the road and camping. And a ton of those people decided to do it with a travel trailer or motorhome. In 2021, the American RV industry set a new record, shipping 600,240 units. The previous record was 504,599 units, which was set in 2017. And this year, the industry believes that it could set another record.

Clearly, a lot of people love hotel rooms on wheels. Our own data shows that you dear readers love them, too. That’s great, because we’re right there with you. I love a good, innovative RV.

And we especially like to highlight trailers and motorhomes with an attractive price, good quality, or that are just plain absurd. We’re not afraid to show you the dark side of some RVs, either.

And thanks to the folks of Go RVing, the consumer-facing voice of the RV manufacturers, I will have access to the nation’s largest RV dealership trade show and only OEM-driven trade show. The Open House is not the largest overall RV show–that distinction goes to the Pennsylvania Recreation Vehicle And Camping Association’s Hershey Show–but it is considered one of the most important as it’s the one that dealerships attend to fill out their inventories with the latest rigs. The show went on a two-year hiatus for the pandemic, but it’s back on this week, 55 years after it first started. And since it is dealer-focused, the manufacturers will be there for demonstrations and to answer questions.

America’s two largest RV conglomerates, Forest River and Thor Industries will be there. The list of manufacturers is huge and includes everyone from Black Series off-road campers, nüCamp European campers, Little Guy lightweight campers, Lance truck campers, and so many more. And remember, Forest River and Thor own countless brands. Coachmen is a Forest River brand while Airstream is under Thor. Put another way, Thor is expecting to bring 500 units to the show from its number of brands.

I’m also excited by the map. This show isn’t just held in a single place, but all over Elkhart, Indiana, where most of these rigs get made each and every year. 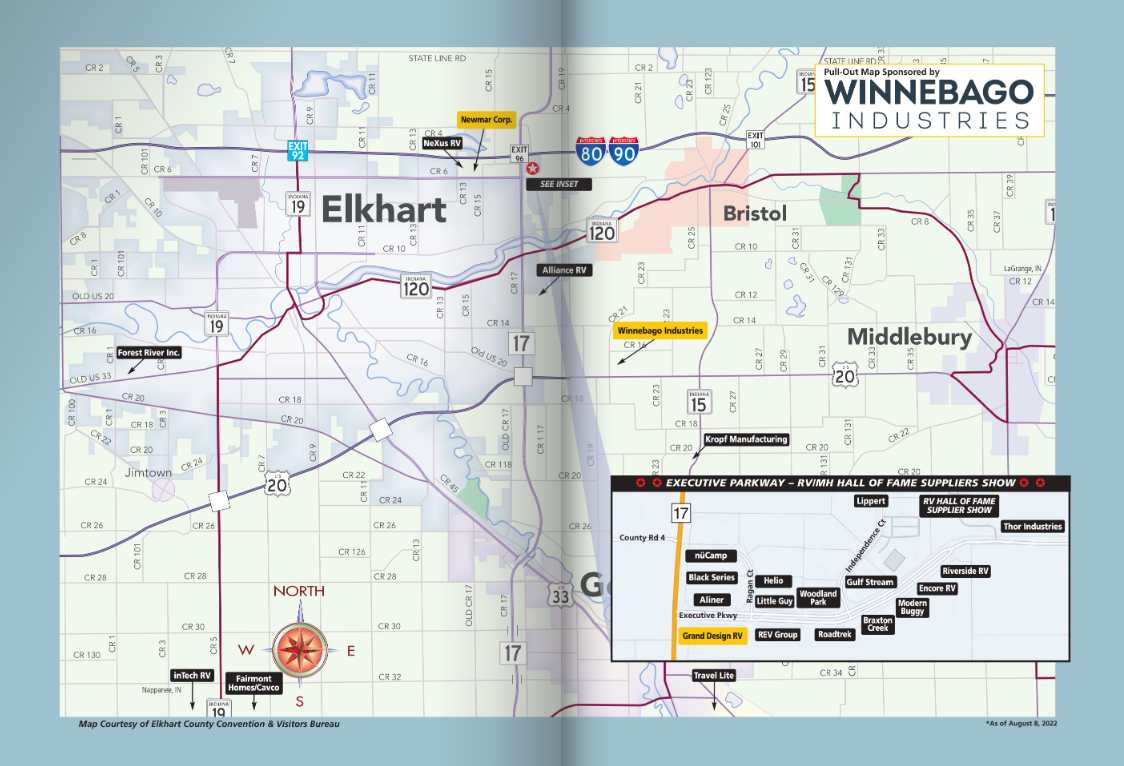 I plan to find the latest in RV tech at the show, from Airstream’s developments like trailers that can park themselves to electrified coaches for the modern era. RV suppliers and the aftermarket will be having their own show in the RV Hall Of Fame, another destination that I cannot wait to visit. There will also be some lightweight and inexpensive campers there, and you bet I’ll be looking them over.

While I do all of this, are there any RVs that you want to see or technology that you’re hoping to make an appearance? I’m going to try to get everything that I can for a stream of articles of excited-me poring over RV details, history, and tech.

Mercedes is a lifelong fan of all things powered by an engine. When she isn't driving one of her five Smart Fortwos or her 14 other vehicles she could be found in the cockpit of a Cessna 172 or perhaps swimming in any body of water that she could find. She also has a deep love for buses of all kinds. Please send her buses. mercedes@theautopian.com Instagram: @mistymotors Twitter: @Miss_Mercedes30 Facebook.com/neonspinnazz
Read All My Posts »
PrevPreviousWhat If Ford Had Made The Mustang Mach-E A Torino Instead?
NextWhich Of These Should Be Ram’s New Midsize Pickup?Next