2024 Chevy Corvette E-Ray Leaked On GM Website And As A Result, The Whole Internet 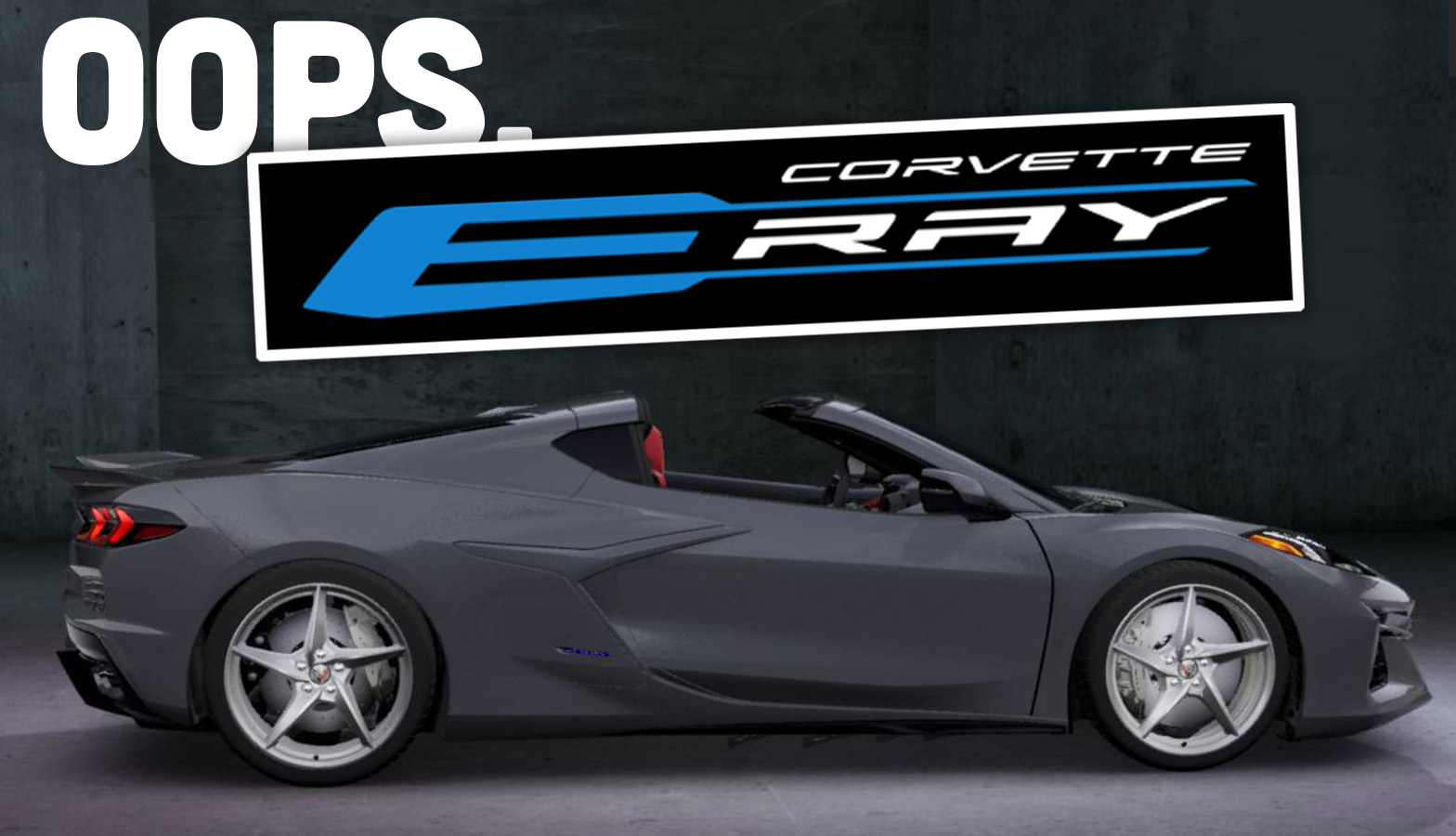 Remember those rumors of an electrified Corvette? Sure you do, it’s all you would talk about! You even showed me this article from the Old Site that had leaked documents showing how the hybrid Corvette would place an electric motor up front, driving the front wheels, to make a hybrid, all-wheel-drive Corvette. We haven’t seen it in official form yet, but now a member of the MidEngineCorvette forum called KK87 was playing with Chevy’s online “visualizer” for the C8 ‘Vette, when they got bold and tried selecting a 2024 model year. The result was pictures of the 2024 Corvette E-Ray, along with the previously-unseen logo. Jackpot! 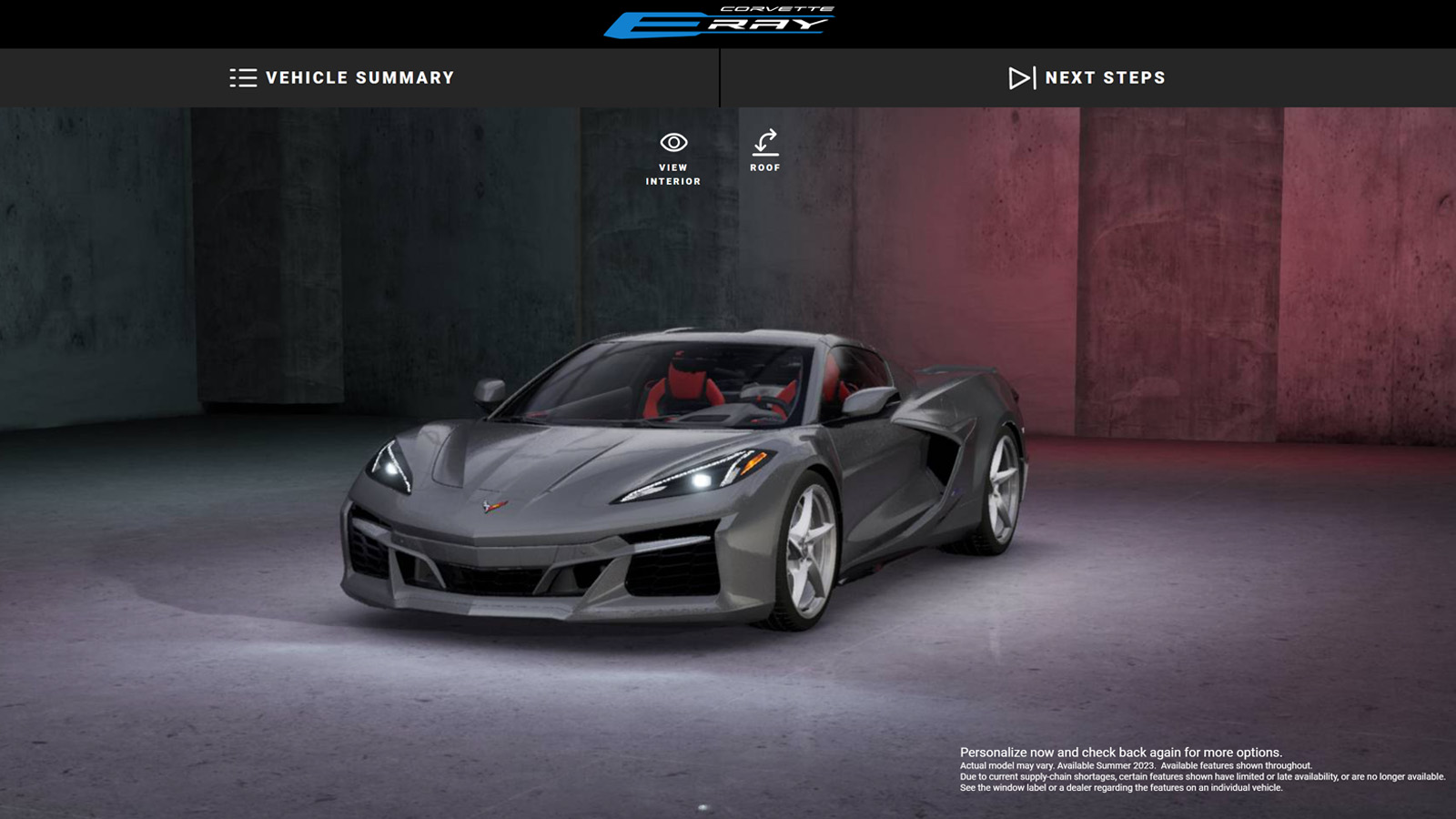 The E-Ray itself is essentially the current C8, without really significant visual changes, though there does appear to be an E-Ray badge just ahead of the side air intake, and it seems to have the side aero strakes found on the Z07.

The logo design for the E-Ray is pretty conventional sports car-type stuff, with the E forming something that could be seen as an electrical plug, with a blue color often used to connote electrical things.

Our Corvette sleuth found what appears to be the color choices for the E-Ray: 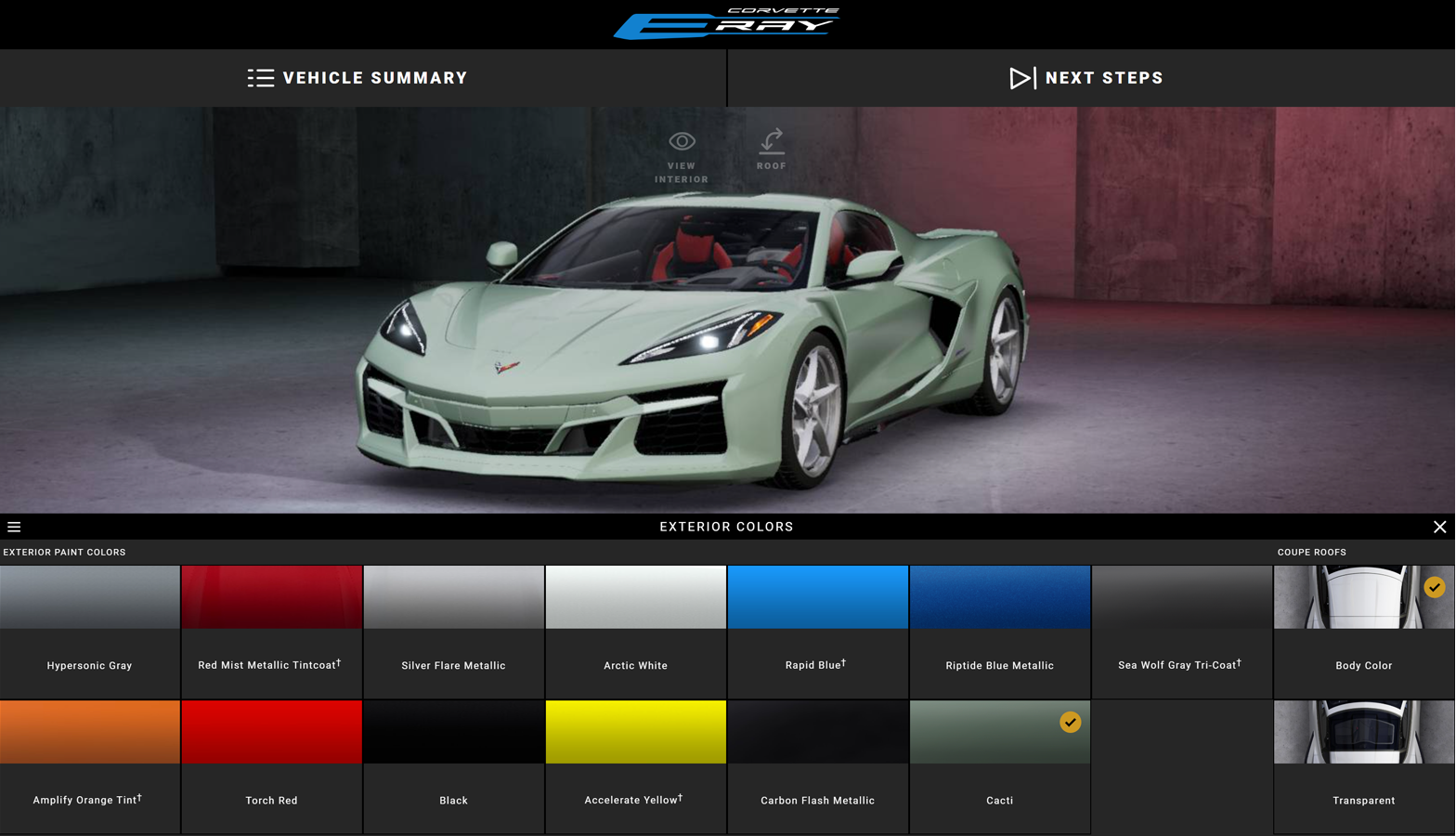 …which is a good set of real, vibrant colors, confirming my theory that fun colors primarily exist only on cheap cars and high-end sports cars, the ends of the market where people are either too rich or too poor to give a shit about people who are afraid of color. I like the choice of Cacti here, too.

They also screengrabbed the wheel selection: 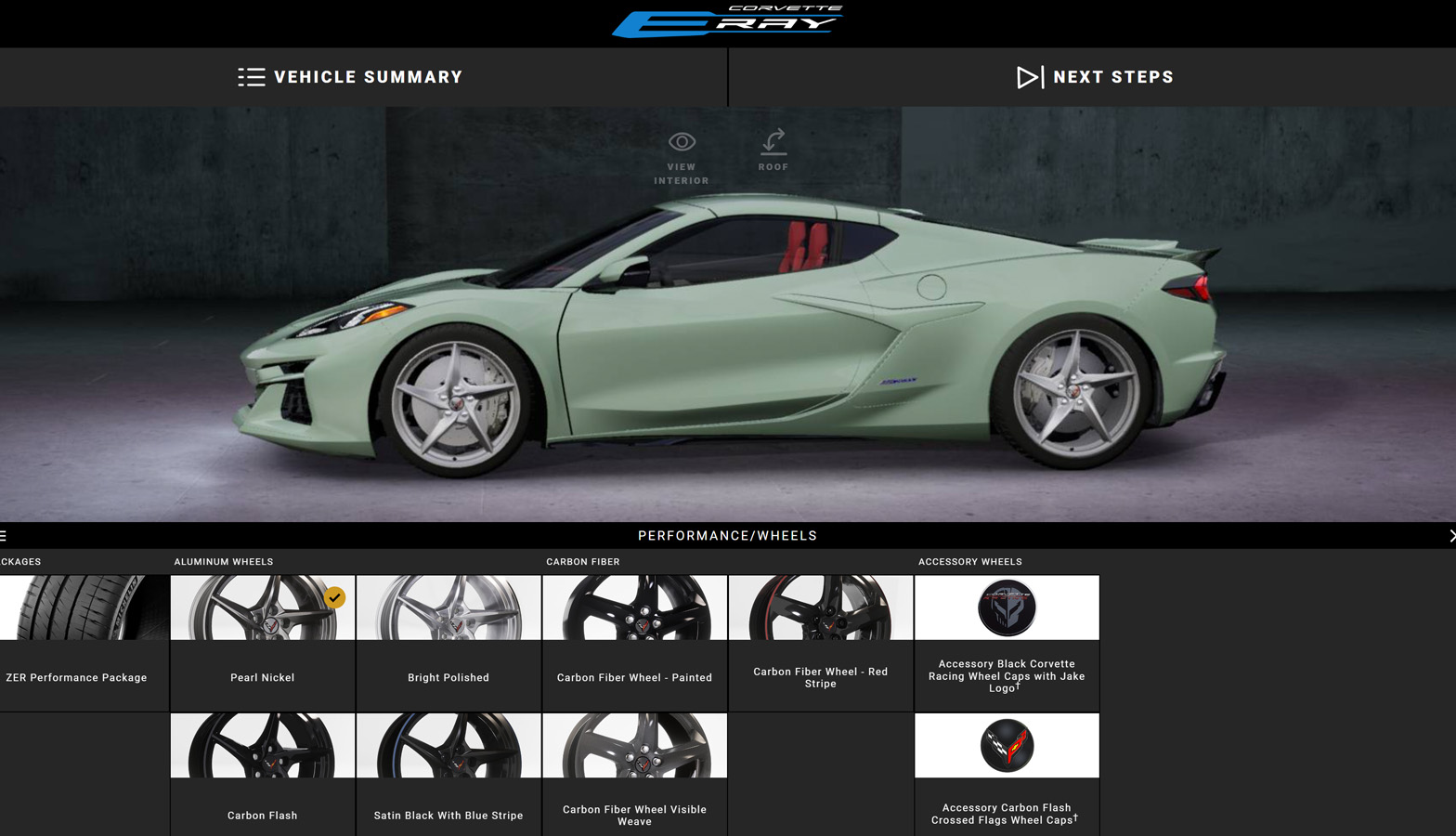 …the ones on the car there leave plenty of space to see the massive brake rotors, and remind me a bit of starfish, keeping with the aquatic stingray/ray motif. 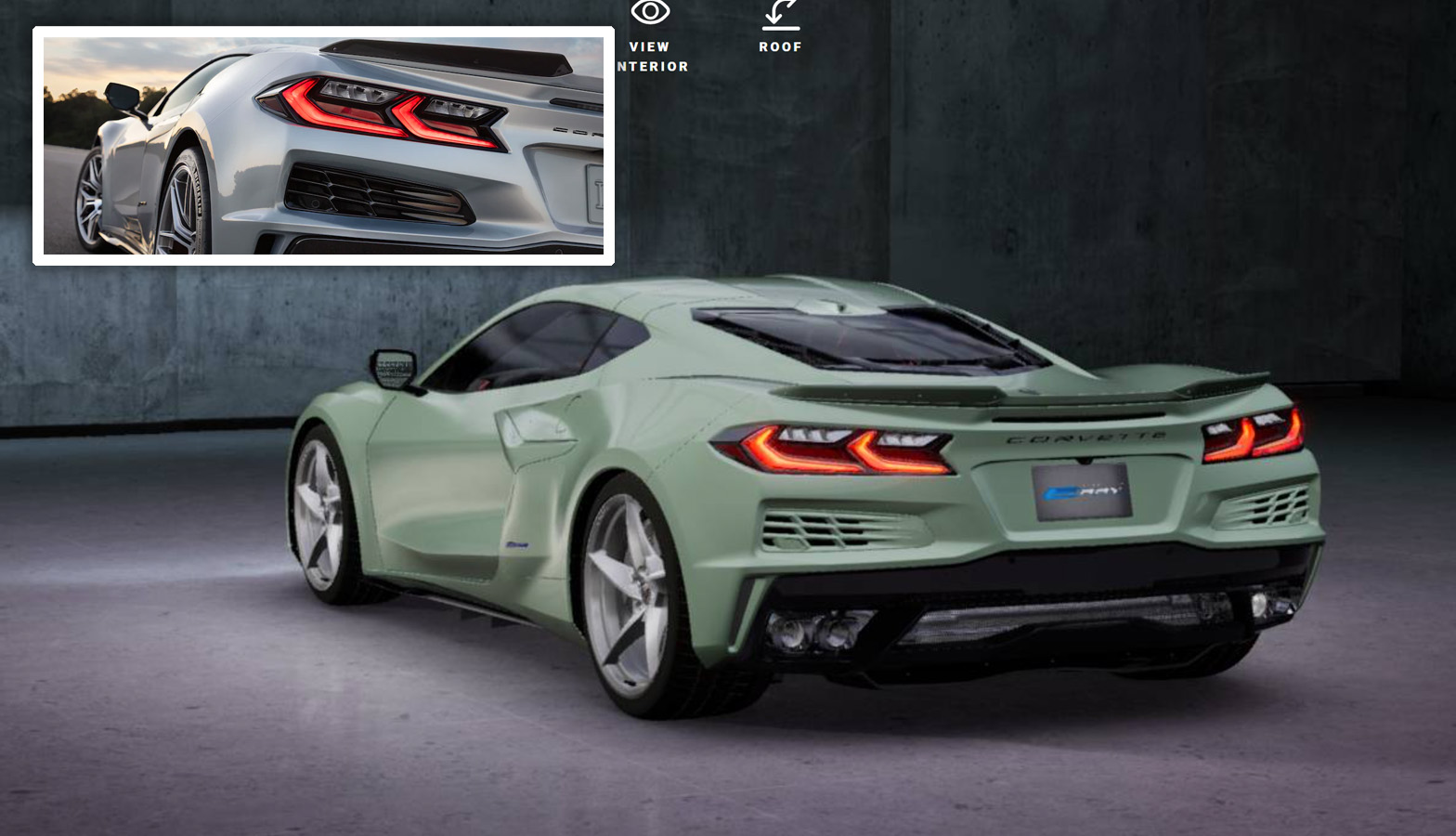 From the rear, it looks like the hot air exhaust grilles are body-colored instead of the more often-seen black, but it’s possible that’s an option, too. If they’re only body-colored on the E-Ray, that could be an easy way to visually identify these when they hit the road.

Another person captured a shot of the dash: 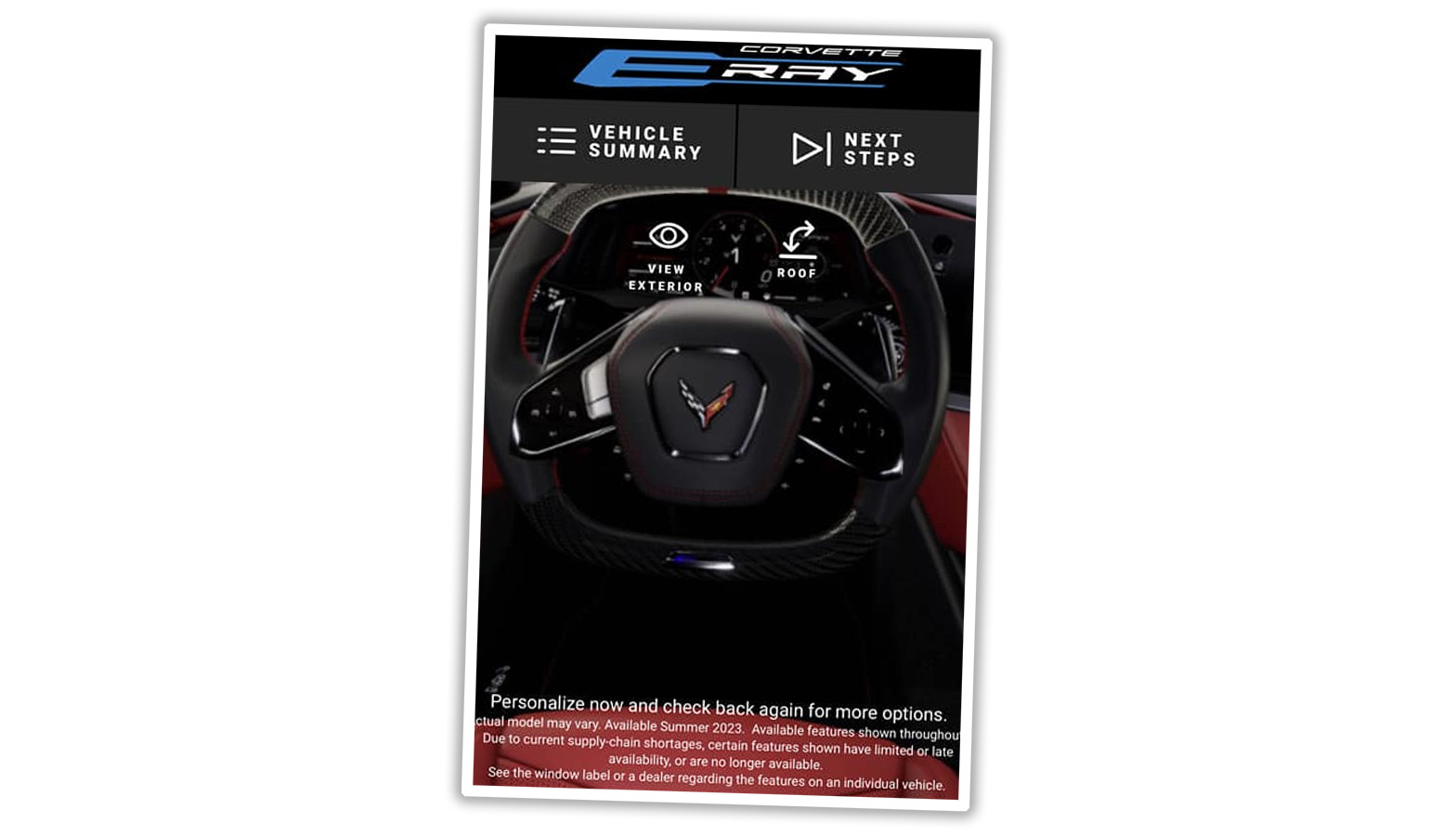 Forum member KK87 notes that the redline appears to be the same, and the steering wheel has one more button.

[Editor’s Note: Here’s me crawling around a largely-disassembled C8 Corvette:

It’s fairly obvious that, from the onset of the C8’s development, GM package-protected for a big battery in that center tunnel, which is not there for exhaust (since it’s rear-engine) or for drivetrain components on rear-drive cars. -DT].

Even if we knew this was coming, who doesn’t like a good leak? Good sleuthing, KK87.

I'm a co-founder of the Autopian, the site you're on RIGHT NOW! I'm here to talk to you about taillights until you cry and beg me to stop, which I absolutely will not. Sorry. Hug? Also, David's friend.
Read All My Posts »
PrevPreviousAccuracy Schmaccuracy: Cold Start
NextAustralian Civil War: 1980 Holden Commodore vs 1989 Ford Falcon SNext