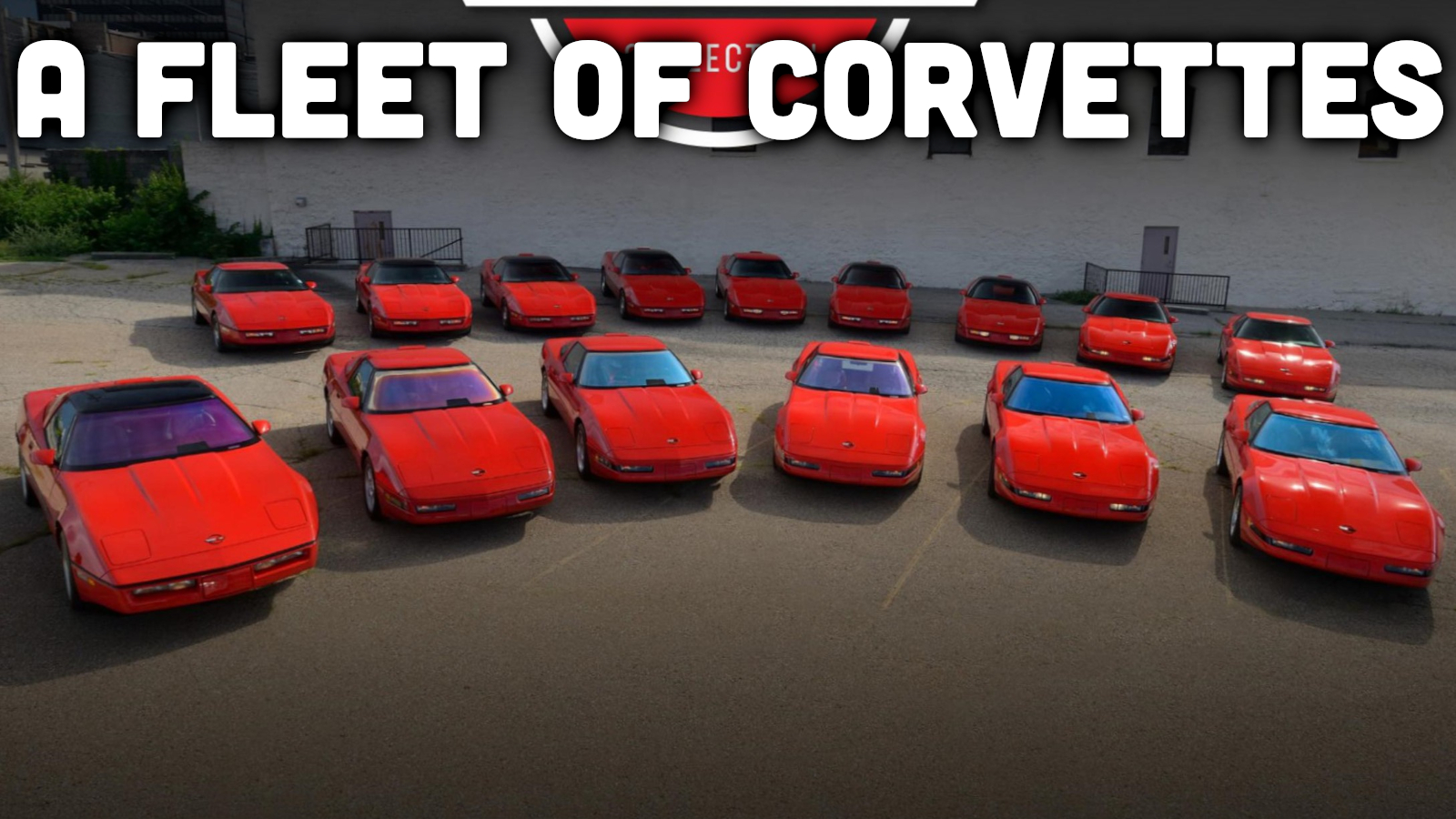 A couple of days ago, Mecum Auctions sold off a collection that’s certain to evoke some feelings. We’ve all heard of (or are) the car collectors with 20 or more cars, with a bunch from the same brand. But how often do you find a large collection of the same car, right down to the color? Steve Clinkinbeard loved the C4 Chevrolet Corvette so much that he bought at least one of every year, including one ZR-1 for every year. And they’re all in red.

If the conversation at the dinner table this holiday season gets sideways, I have a sure way for you to change the subject. Ask the car people at the table about the best Chevy Corvette. You might witness a debate turning into an all-out war over which generation of America’s quintessential sports car is the best. And there might be good salvos back and forth, like how the mid-engine C8 offers supercar performance at a low price, or how the C2 looks like nothing else. You might even hear about how the C5 is a good bargain. Perhaps least beloved of all Corvettes is the C4, and that’s a shame because these are actually pretty cool. Clearly, Clinkinbeard agreed. 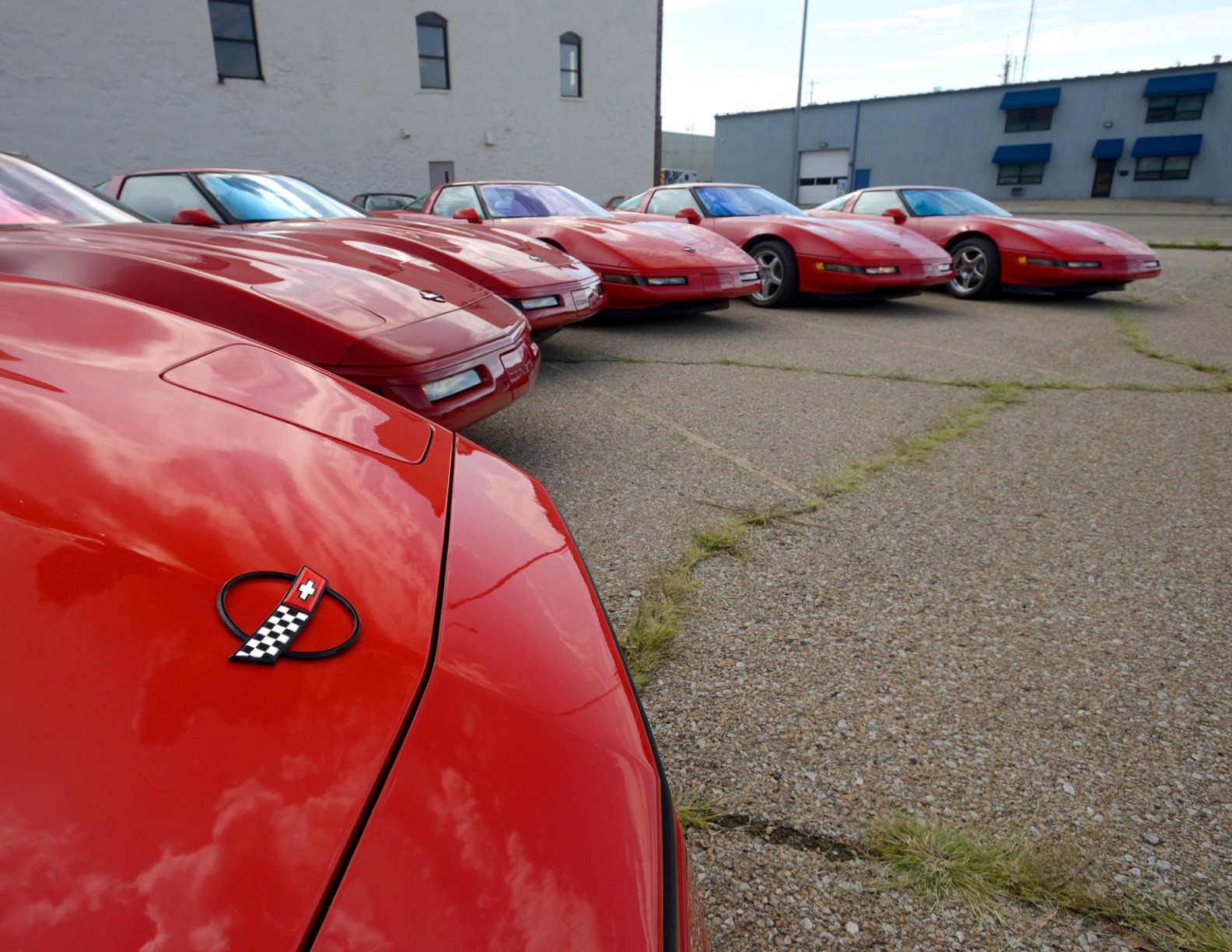 The Mecum Auctions listing for “The Red C4/ZR1 Low Mile Corvette Collection” notes that the late 1983 introduction of the C4 was a momentous occasion. General Motors built a new factory in Bowling Green, Kentucky where the C3’s production finished out. And the C4 would skip a year, debuting for the 1984 model year. Mecum isn’t wrong, as the C4 was a big deal! As Motor Trend notes, Corvettes up until that point largely followed the same philosophy. The C3 made its debut in 1968 and production ran for an impressive 14 years. However, as Hemmings writes, the Corvette was getting long in the tooth as the C3 still used parts from the older C2.

The team tasked with bringing the C4 to life was Corvette Chief Engineer David McLellan and Lead Designer Jerry Palmer. They had some big shoes to fill as they replaced legendary engineer and Corvette-father Zora Arkus-Duntov and also designer Bill Mitchell, respectively. The Corvette had been the subject of experimentation in the years before. That experimentation resulted in wild concepts that looked sharp and had mid-engine power, including variations on Wankel rotary power. 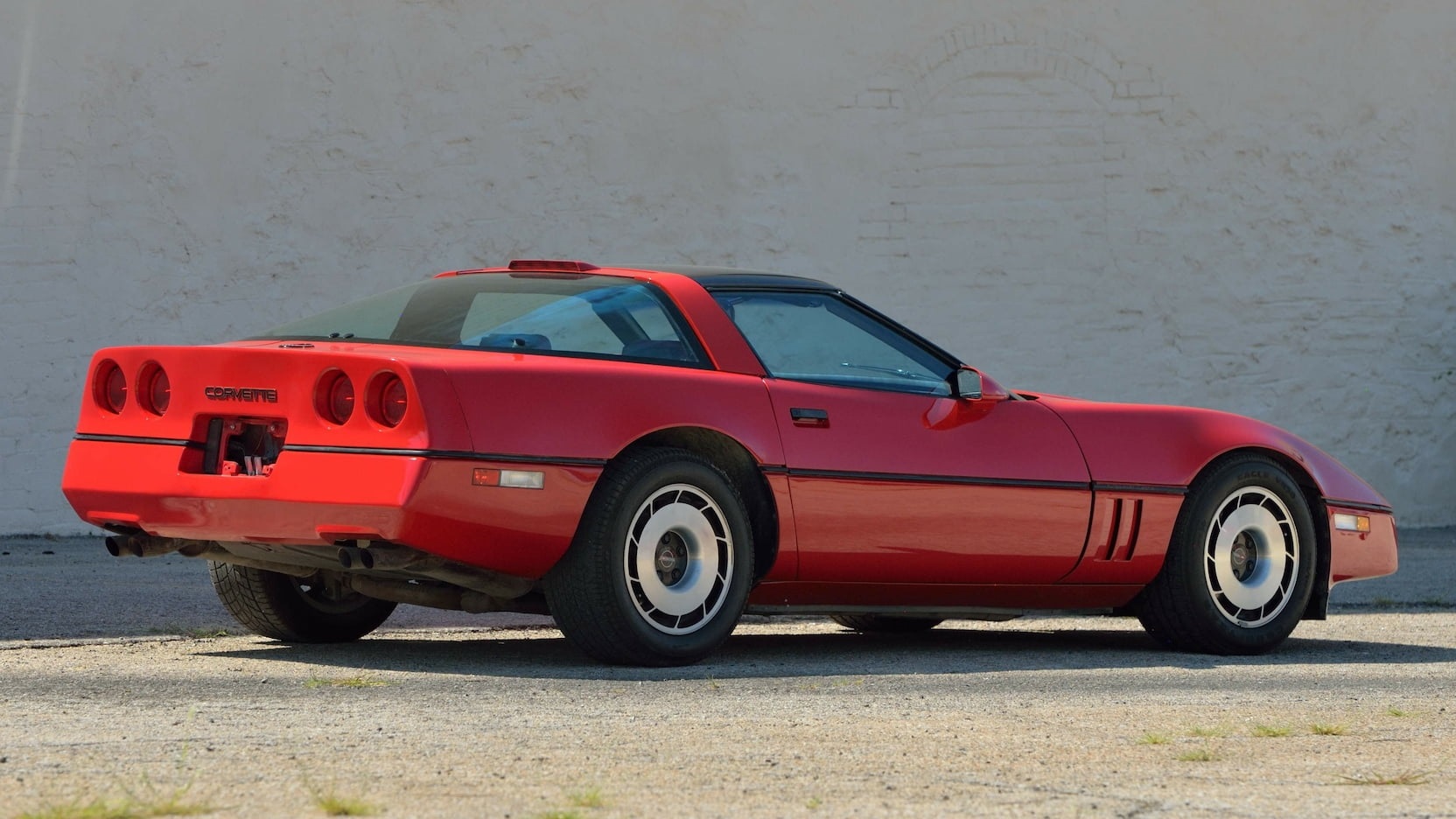 Of course, the C4 wouldn’t go that far, but it was still a pretty big leap forward. Palmer’s team reportedly followed the “form follows function” mantra and made a Corvette for a new era. Nine inches were sliced off of the vehicle’s length, the doors were pushed out, and a pop-top made a comeback.

Chassis development went through an overhaul, too. Previous Corvettes had bodies that bolted to a frame. But the C4? It had a frame to which the upper “birdcage” skeleton was welded, making the C4 a unibody. Then the body panels would mount up to the vehicle. The C4 ditched having a T-bar for its opening roof to open up the interior even more. But the T-bar provided strength, so the car’s door sills became huge for strength. The sills of a C4 are tall enough that getting in one isn’t much different than an Electra Meccanica Solo or a BMW i8. You throw yourself in, rear end first, and lift yourself out.

The C4 had lots of other goodies, too, from an interior flush with futuristic digital gauges to rack and pinion steering. And who can ignore the 1980s aerodynamic wedge shape of the C4? 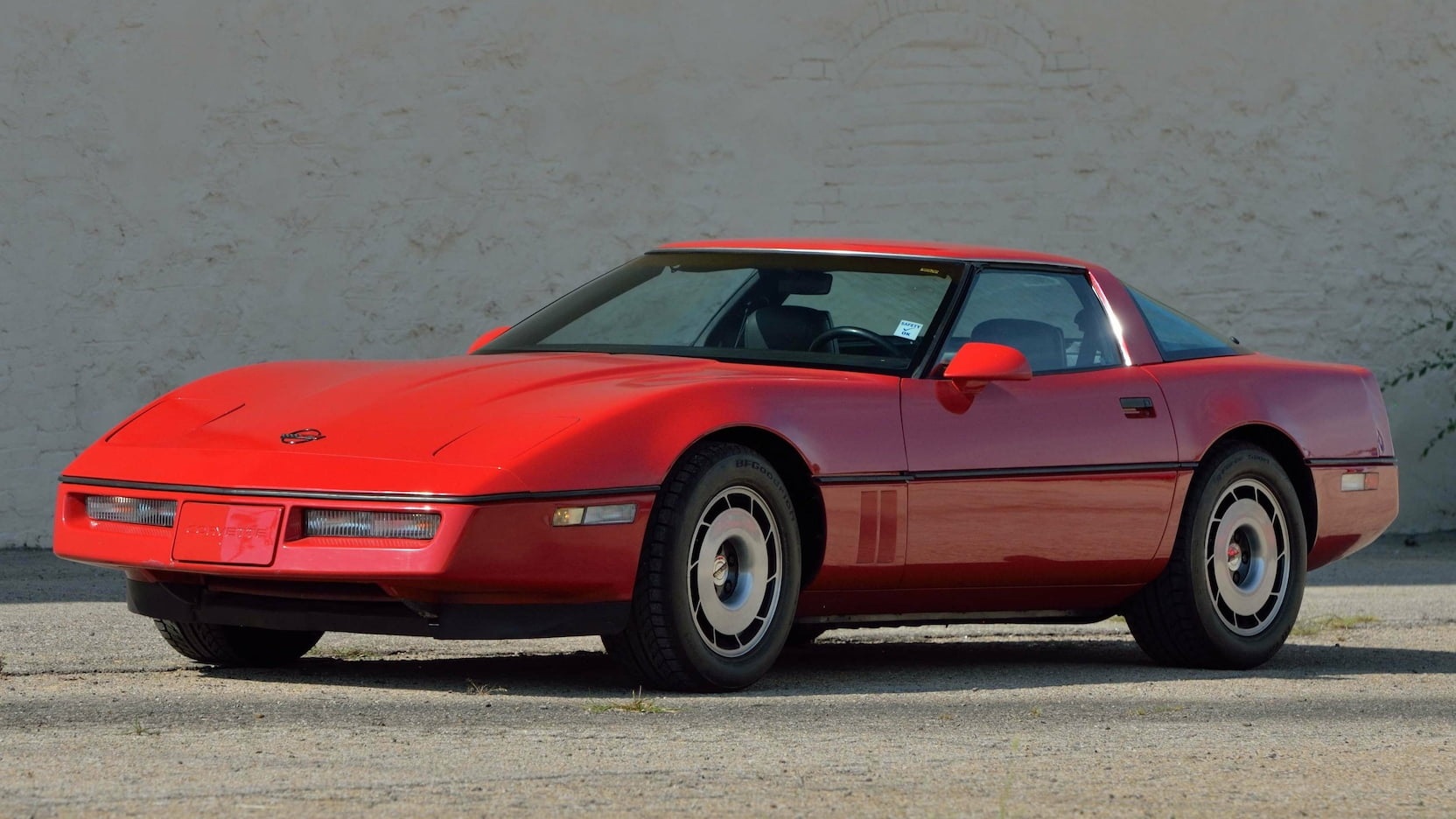 The C4 launched to praise from the media. It was quick, tight, and out-performed its rivals on the skidpad. In 1983, Popular Mechanics proclaimed “’83 Corvette: Best American Car Ever!” In the same month, Road & Track published its own praise in its “Corvette Spectacular!” issue. The Corvette wasn’t perfect; its 5.7-liter V8 made just 205 HP at launch, ingress and egress were hard, and the Z51 package made the ride harsh. But it was popular, and the C4 enjoyed a 12 model year run where 358,180 units sold.

I first sat in a C4 well over a decade ago when I was a teenager. It was a red convertible sitting in the showroom of a U-Haul Neighborhood Dealer. I remember hopping into that tan interior and being blown away by the digital gauges. My parents had a 2003 GMC Envoy XL at the time and it didn’t even have those! 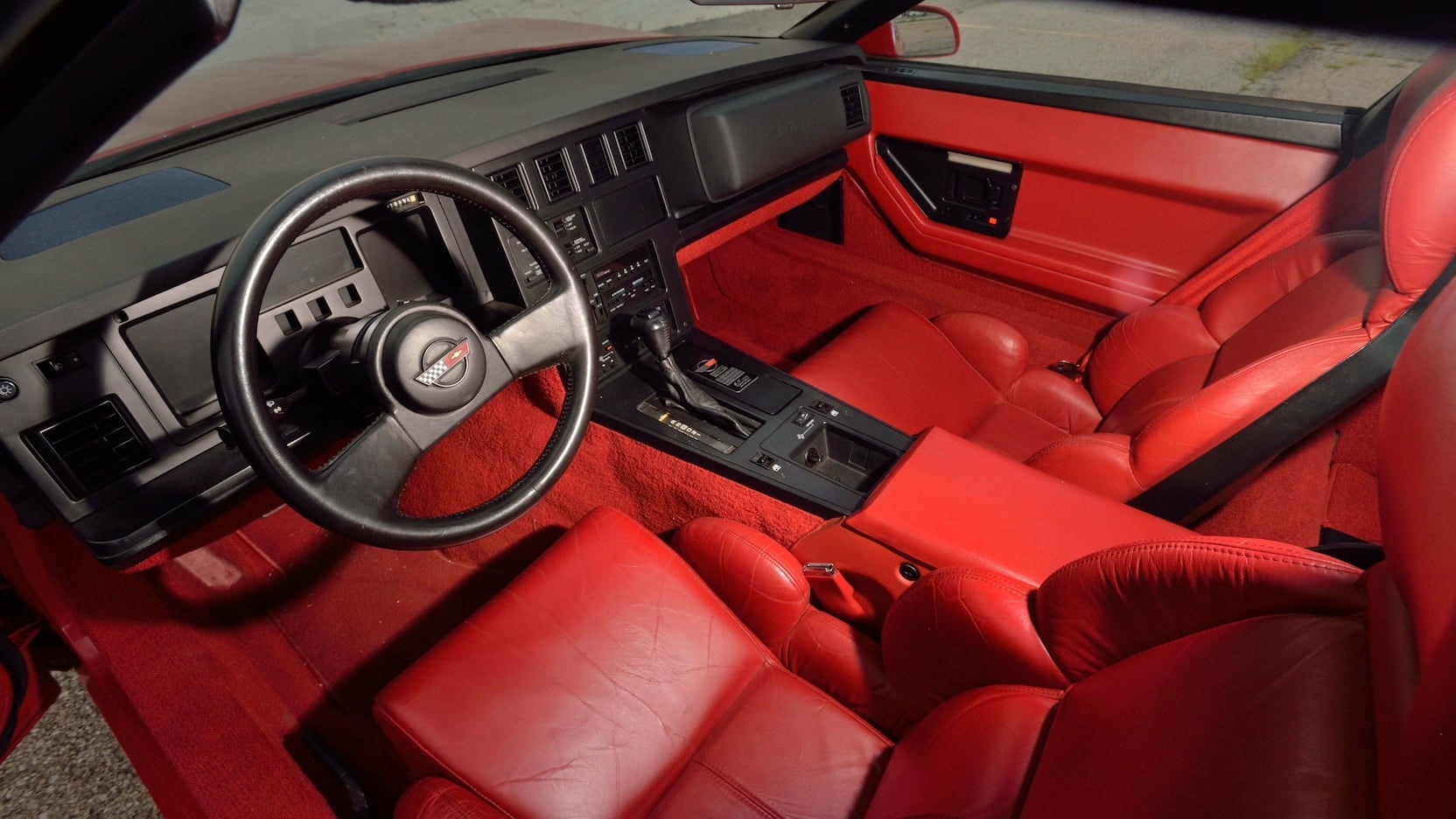 Apparently, people who love C4s are rare. The C4 ends up on worst Corvette lists and towards the bottom of generation rankings. And look at the C4s on the used market and you’ll see that so many of them end up clapped out and trashed. Then there are people like Steve Clinkinbeard. As Mecum notes, Clinkinbeard bought his first C4 in 1985, then sold it in 1992. He then went years without a C4 before the allure drew him back in. In 2012, Clinkinbeard bought a red-on-red 1985 C4 just like the one that he used to have. Then, he just decided to collect a low-mileage C4 coupe of every year, specifically in red, from Mecum:

By the end of 2012, Clinkinbeard had added six more to his collection, and in 2013, he purchased another six, with his collection coming together from sellers across the nation. With his collection including at least one Corvette from 1984 through 1996, he purchased the final car in July 2014, a 1990 ZR1 that meant his collection now also included a ZR1 for each year the model was offered. His claim to fame, The Red C4/ZR1 Collection has been housed in a heated warehouse, covered and routinely started and cared for over the years.

What you see here is the end result of that collecting. 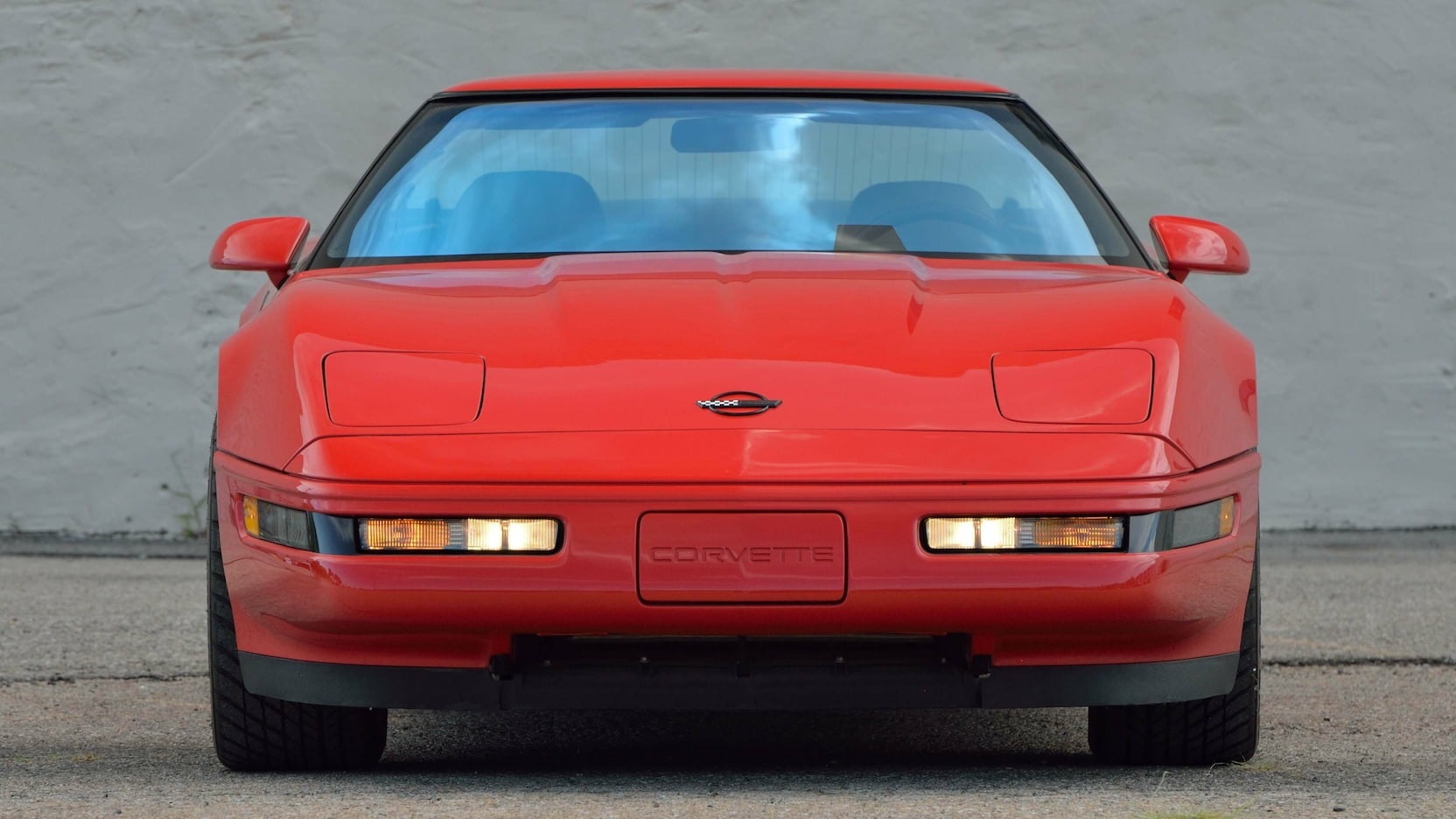 In the end, Clinkinbeard owned 15 Corvettes, all of them red and even including a ZR-1 from every year that it was available. Seeing his cars looks like a detailed C4 Corvette timeline all in one place. You get to see how the design evolved from the squared edges of the 1980s to the rounded out edges of the 1990s. In the interior, you can see the radical digital gauges of the 1980s replaced by a hybrid set of gauges in 1990.

The dashboard also got rounded and the steering wheel gained an airbag. 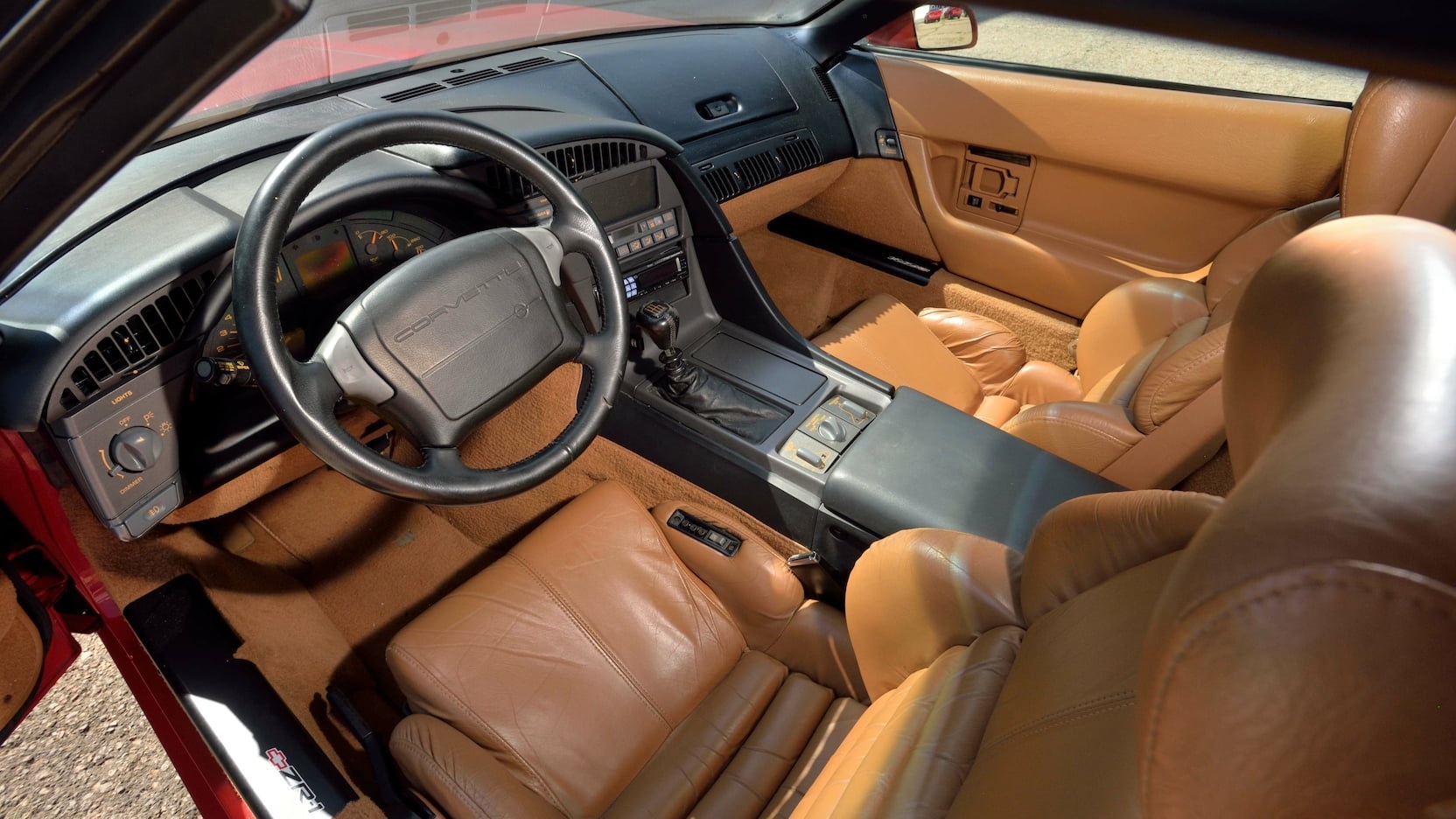 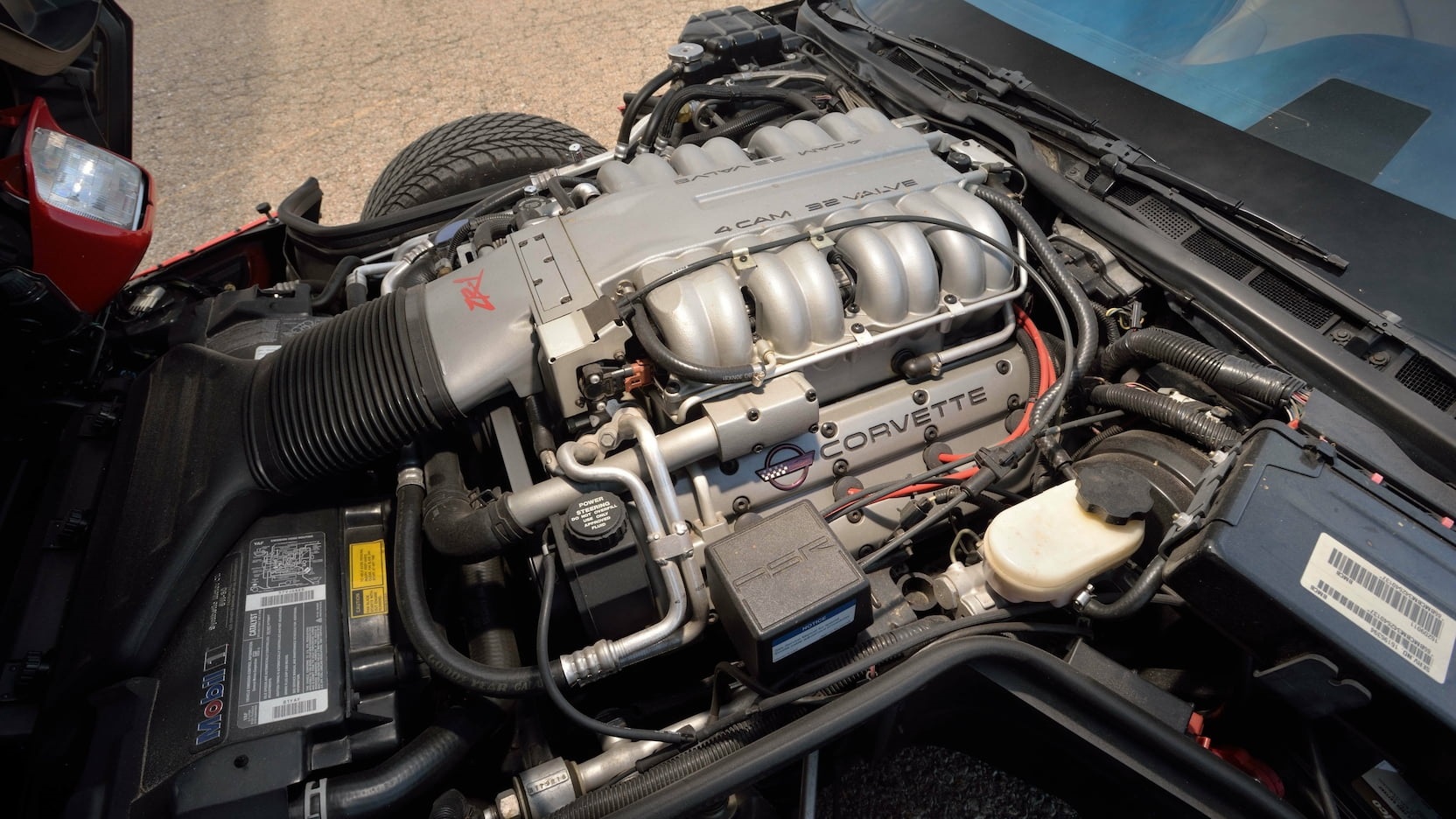 Clinkinbeard told Fox News that he’s no longer in the shape that he was in his younger years, and thus can’t really enjoy his Corvettes anymore. And he doesn’t want to leave his wife with 15 Corvettes to deal with if something happens to him. So, the Corvettes all found new homes. Hopefully, he does something cool with the money. And if you’re looking for a performance bargain, I’d say give a C4 Corvette a look. It may not be the best Corvette, but even pristine ones are dirt cheap.

Mercedes is a lifelong fan of all things powered by an engine. When she isn't driving one of her five Smart Fortwos or her 14 other vehicles she could be found in the cockpit of a Cessna 172 or perhaps swimming in any body of water that she could find. She also has a deep love for buses of all kinds. Please send her buses. mercedes@theautopian.com Instagram: @mistymotors Twitter: @Miss_Mercedes30 Facebook.com/neonspinnazz
Read All My Posts »
PrevPreviousWhy I Just Sold My Beloved 1958 Willys FC-170
NextHere’s A Look At The Only EV Roadster You Can Buy Today Thanks To Wacky Latvian Car-Customizer ‘Dartz’Next