The Dodge Spirit R/T Was The Fastest Sedan Built In America And Nearly As Quick As A BMW M5: Holy Grails 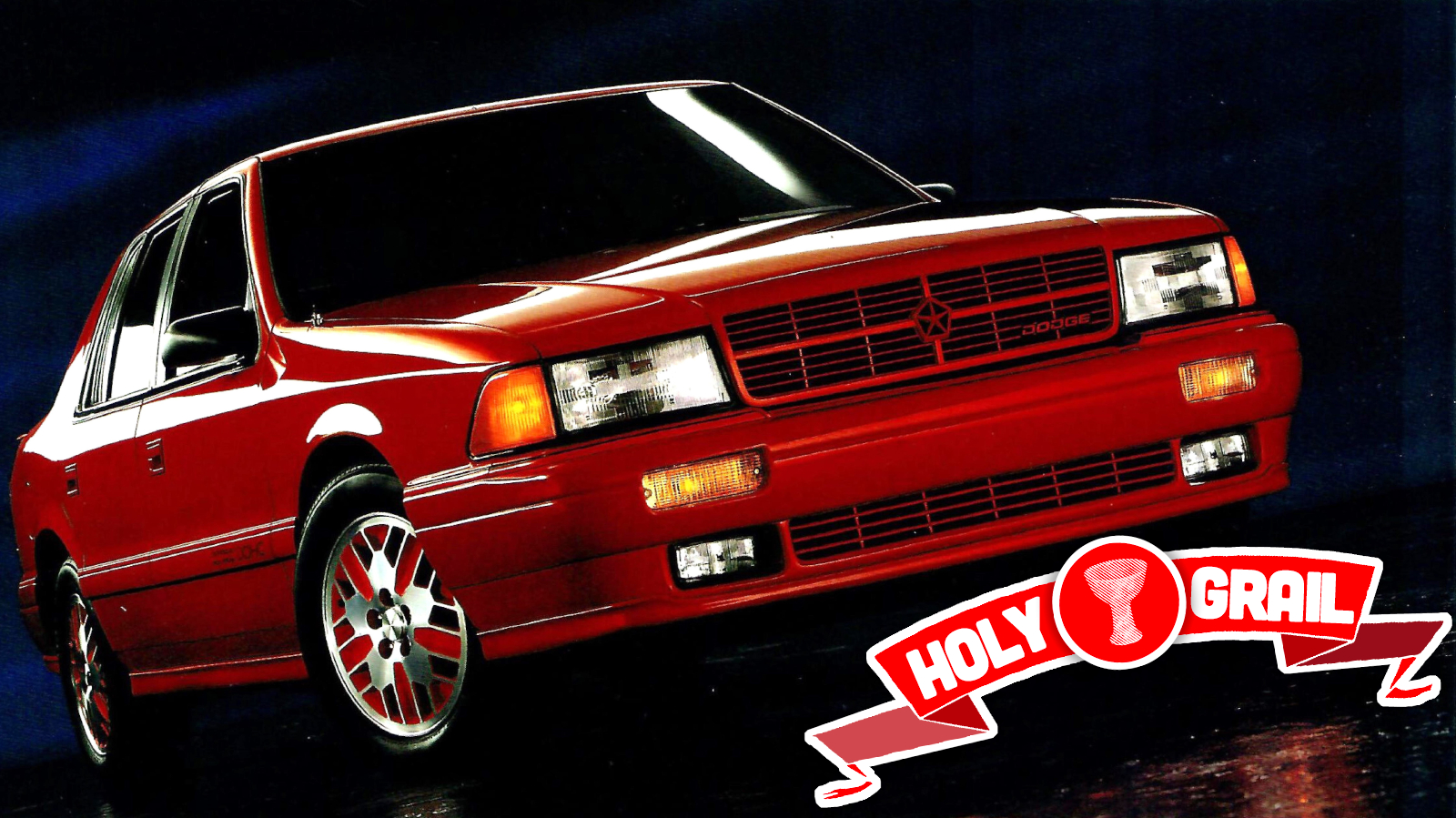 Welcome back to Holy Grails, the Autopian series where you show off some of the coolest, most underrated cars that you love. Grails continue to come in sizzling hot from you lovely readers, and most of these submissions legitimately rock in their own way. Today, one reader wants to remind you of a time when Dodge made what looked like a boring sedan. The reality? Under the hood was enough firepower to make it the fastest four-door built in America. Our readers are talking about the Dodge Spirit R/T, the front-wheel-drive wonder that was almost as fast as an E34 BMW M5 and a legit holy grail.

Last time, reader Jason L pointed out a fabulous 1990s Japanese performance car that collectors appear to be overlooking. Launched in 1991, the Nissan Sentra SE-R took what was otherwise a regular economy car and made it something awesome. For the Sentra SE-R, Nissan went into its parts bin, using the 2.0-liter SR20DE four meant for the Infiniti G20. Making 140 HP and 132 lb-ft torque, it was a decent improvement over the base 1.6-liter four that made 110 HP and 108 lb-ft torque. That was coupled to a manual transmission and it had an honest limited-slip differential. The result was something that reviewers said reminded them of the BMW 2002 of old, but for the modern day.

Today’s holy grail once again borrows from the same formula: Take a sedate economy car, then jack it up with some horsepower. That’s been a theme with our Holy Grails series lately, and you lovely readers keep sending in other examples of this happening throughout history. This suggestion was hard to ignore, as our reader sent us two emails to point out how cool these cars were. Picture an early 1990s performance car and your brain will probably conjure up images of the BMW E34, Acura Integra, Honda Prelude, Ford Taurus SHO, or perhaps a Ford Mustang. Those names may be better remembered and sometimes more valuable, but at least some of you feel that the Dodge Spirit R/T didn’t get its chance to shine.

As Hagerty writes, the story of this factory hot rod begins in late 1980 as the first of Chrysler’s then new K-cars rolled off of the assembly line. Chrysler was bleeding cash and was on the brink of financial collapse. With help from the government and the versatile K platform, Chrysler was able to pull itself out of its slump.

Part of the K platform’s magic was that it allowed a bunch of derivatives that shared tons of parts, which provided Chrysler with the opportunity to pump out different models for less money. In 1989, the “AA” body K derivative launched. This stretched version of the famous K platform was the backbone of the Plymouth Acclaim, Dodge Spirit, and Chrysler LeBaron sedan. Other countries got AA-body cars in the form of the Chrysler Saratoga and Chrysler New Yorker.

At first, the Spirit was a practical small family car. Its base engine was a 2.5-liter four that made 100 HP, but if you were around then you could option an available 3.0-liter V6 from Mitsubishi that made 141 HP or the 2.5 with a turbo making 150 HP. However, in 1991, the Spirit got a shot of adrenaline, and this is the one that reader JamesRL says is a real holy grail. In fact, this reader believes so much in the Spirit R/T that they’ve sent us more than one email about it. That’s the enthusiasm that we adore here! From JamesRL:

According to Chrysler it was the “fastest sedan produced in America. It was also allegedly the fastest “mass produced” car in the world, since the M5 was hand built. It was also the fastest car under $40,000.

Besides a subtle body kit and color matched wheels it looked like a regular Dodge Spirit. It was initially only offered in Red or White, but Chrysler added Silver for 1992 (only 31 buyers went with Silver).

Under the hood is where it gets spicy; it had a 2.2 liter Turbo III engine with 224hp and 217 lb-ft of torque. Offered only with a 5spd manual, it also had heavy duty 4 wheel vented disk brakes and optional ABS. The interior trim was specific to the R/T too.

When I read this email I did a double-take. I found it hard to believe that this early ’90s Dodge was the fastest American-built sedan. But sure enough, it appears that Dodge did just that. The Spirit R/T was basically the Charger Hellcat of its day, offering a ton of performance for not a whole lot of coin.

Most of it comes down to what’s housed in the engine bay. For the Spirit R/T, Dodge’s engineers looked into the Mopar parts-bin while joining forces with Lotus. Out of the other end came the 2.2-liter Turbo III inline-four. As the name would suggest, this was Mopar’s third iteration of its 2.2-liter turbo four that found a home in many Chrysler vehicles throughout the 1980s.

This version of the turbo four had a dual overhead cam 16-valve head developed by Lotus. It punched out 224 horsepower and 217 lb-ft torque. In the Spirit R/T, it was paired to a manual transmission (an automatic was not available) and converted the front tires into smoke. And if you can keep the hammer down long enough, it would race on to a top speed of 141 mph.

This engine alone turned the Spirit R/T into a beast, from a 1991 review from Car and Driver:

What we have here is a Sugar Ray Leonard engine trapped in a Homer Simpson physique. The Sugar Ray part is amazing: Chrysler’s new sixteen-valve turbocharged-and-intercooled four (the maker’s first engine with four valves per cylinder) chums out a whopping 224 horsepower at 6000 rpm and 217 pound­-feet of torque at 2800. That’s from 2.2 liters, kids.

Like Sugar Ray, this engine is explosive: there’s a touch of turbo lag from rest, but before you can say “Where’s the boost?” the blower is screaming and you’re struggling to separate your cranium from the headrest. Indeed, with only 3162 pounds to propel (the R/T is by far the lightest of the clippers), the engine generates enough forward thrust to humiliate many of the world’s blue-chip sports cars. The R/T’s 0-to-60-mph performance even betters that of the last Nissan 300ZX Turbo we tested. Unless you’re piloting, say, a Corvette ZR1 or a cruise missile, you’ll do well to lay low if a Spirit R/T rolls alongside at a stoplight.

I still couldn’t believe it, so I flipped through the pages of MotorWeek’s history and found that the charming John Davis was also impressed with the Spirit R/T’s power.

Sure enough, Dodge really did make the fastest sedan built in America, or specifically, Mexico. As Davis noted in his review, the Spirit R/T is faster than a Taurus SHO, and the Turbo III was punching out just one fewer pony than the Ford Mustang’s 5.0 V8 of the day. Performance varies depending on who is behind the wheel, but Car and Driver got its Spirit R/T tester to 60 mph in 5.8 seconds and dispatched the quarter mile in 14.5 seconds. MotorWeek was a little slower, hitting 60 mph in 6.4 seconds and the quarter in 15.1 seconds. The Spirit R/T is noted to have some wheelspin and loads of torque steer, and I bet those factors in getting an optimal acceleration time.

Now, our reader does go on to say that the Spirit R/T is faster in the quarter mile than an E34 BMW M5. The tests that I’ve read show the M5 to be slightly faster. For example, when Car and Driver tested a 1991 BMW M5, it did the quarter in 14.2 seconds, 0.3 seconds faster than the Spirit R/T. And it got to 60 mph 0.2 seconds faster than the Spirit R/T. But that’s still amazing as the little Spirit is nearly as fast as a 310 HP M5. And with a slow driver behind the wheel of the M5, I bet the Spirit could beat it, too.

Perhaps the best part about the Spirit R/T is that it looks just like a regular Spirit. Sure, you get R/T badging, front and rear spoilers, cast aluminum wheels, and a bright color, but nothing that screams that this will blow the doors off of any other sedan in America. The Spirit’s conservative looks are cited as one reason why Car and Driver placed it third in a shootout against a Ford Taurus SHO and a Chevy Lumina Z34.

Another knock against the Spirit R/T noted by both MotorWeek and Car and Driver is its chassis. Dodge pumped up the R/T’s shocks and springs for performance duty, but reviewers found that the chassis wasn’t as steady as the car’s competitors. MotorWeek found the Taurus SHO to have a more balanced chassis feel, and that the Spirit R/T’s engine overpowers its stock tires. MotorWeek’s Davis went on to note that optioning the car with ABS was mandatory, as stopping the ride was an event on its own. Thus, both publications praise the Spirit R/T mostly for its incredible straight-line performance. Motor Trend was more impressed, and nominated the Spirit R/T as its “Domestic Sport Sedan of the Year” preferring it over the Taurus SHO.

The Spirit R/T was built for just two model years, 1991 and 1992. And over that time, just 1,399 of them were produced. That makes the Spirit R/T a pretty rare vehicle. Despite that, these remain pretty cheap. Zero Spirit R/Ts have sold on Bring a Trailer, and I found zero mint Spirit R/Ts currently for sale. Here’s one that needs some work for $3,000. But even all fixed up, they aren’t worth a ton. Here’s a clean one that was listed for just $6,980.

Will these ever be valuable? I cannot tell you. One thing’s for sure, if you’re looking for an affordable early 1990s car that looks slow but could still lay a smackdown at the lights, the Spirit R/T is worth a look. Nobody would expect this to be as fast as it is.

Do you know of a holy grail of a car out there? If so, we want to read about it! Send us an email at tips@theautopian.com and give us a pitch for why you think your favorite car is a holy grail.

Mercedes is a lifelong fan of all things powered by an engine. When she isn't driving one of her five Smart Fortwos or her 14 other vehicles she could be found in the cockpit of a Cessna 172 or perhaps swimming in any body of water that she could find. She also has a deep love for buses of all kinds. Please send her buses. mercedes@theautopian.com Instagram: @mistymotors Twitter: @Miss_Mercedes30 Facebook.com/neonspinnazz
Read All My Posts »
PrevPreviousThe Hero Of The LA Auto Show Was This Dirt-Cheap Kia Rio
NextSelling Lancias With Disgust And Contempt: Cold StartNext