Holy Grails: The Mercury Tracer LTS Was An Underrated Performer With The Body Of A Practical Sedan

Welcome to Holy Grails, a new series here on the Autopian! If you’ve been reading our bylines for a while, chances are you’ve caught David talk about some obscure Jeep, me talking about a Smart or Volkswagen, or Jason doing a deep dive on a car you’ve never heard of from a country you’re not even sure ever existed. We’ve often called these cars ‘holy grails’ and it seems that you dear readers love it. Our inboxes have been getting filled up with you sending us your holy grails, and honestly, these cars are pretty awesome. So in this new series, we’re going to be highlighting the cars that you think are holy grails. To start, we have the Mercury Tracer LTS, a performance sedan that I bet you’ve seen before without even noticing.

Back in the 1930s, Ford engineers began work on a vehicle to fill a hole. This vehicle would have more features and styling than any existing Ford product, but not quite on the level of a Lincoln. Created in 1938 by Edsel Ford, Mercury’s existence was that of a middle child, filling Ford’s gap for a mid-range premium vehicle.

Despite being the middle child, Mercury did manage to produce some desirable cars like the Eight, which eventually became a popular canvas for lead sleds. And don’t forget the outrageously aggressive Cyclone that Jason recently wrote about. I mean, how many cars look like they have a huge gun hiding behind its nose? And then there’s the Cougar, Marauder, and oh, the attempt to sell captive European imports as Merkurs.

Less famous than all of these cars is one of the automaker’s efforts to build an upscale, sporty sedan with the Tracer LTS.

The Tracer was first marketed for the 1987 model year. A compact, the first-generation Tracer replaced the Lynx, a rebadged Ford Escort. Behind the Tracer’s badge were the bones of the Ford Laser, a compact sold in markets outside of the United States. And the Ford itself was a BF platform Mazda 323 underneath. But we aren’t here for the first-generation. Instead, we want to take a peek at the second-generation.

Launched in 1991, the second-generation Tracer gained a counterpart. The Mazda BG platform found itself underpinning the Ford Laser, Ford Escort, Mazda 323 (Protegé), and the Mercury Tracer. In America, the standard Tracer and its Escort counterpart got a Ford 1.9-liter four making 88 horsepower. Given that it’s moving a 2,468-pound car, we’re talking about gradual acceleration, here.

That’s where the Tracer LTS, or Luxury Touring Sedan comes in, featuring a 1.8-liter Mazda four punching out 127 HP. And, reader Chip says, this is the one to get; the holy grail of these forgotten cars:

Ford made a couple 4 door versions with the 1.8 liter engine. One was the Ford Escort LX-E and the other was the Mercury Tracer LTS. Both of these cars had all the running gear from the GT (including 4 wheel disc brakes) but in a 4 door chassis. Now dad could take the kids along while out enjoying the twisty roads. These cars didn’t sell well unfortunately, because they were a bit of a premium over the normal cost of the regular Escort and Tracer. 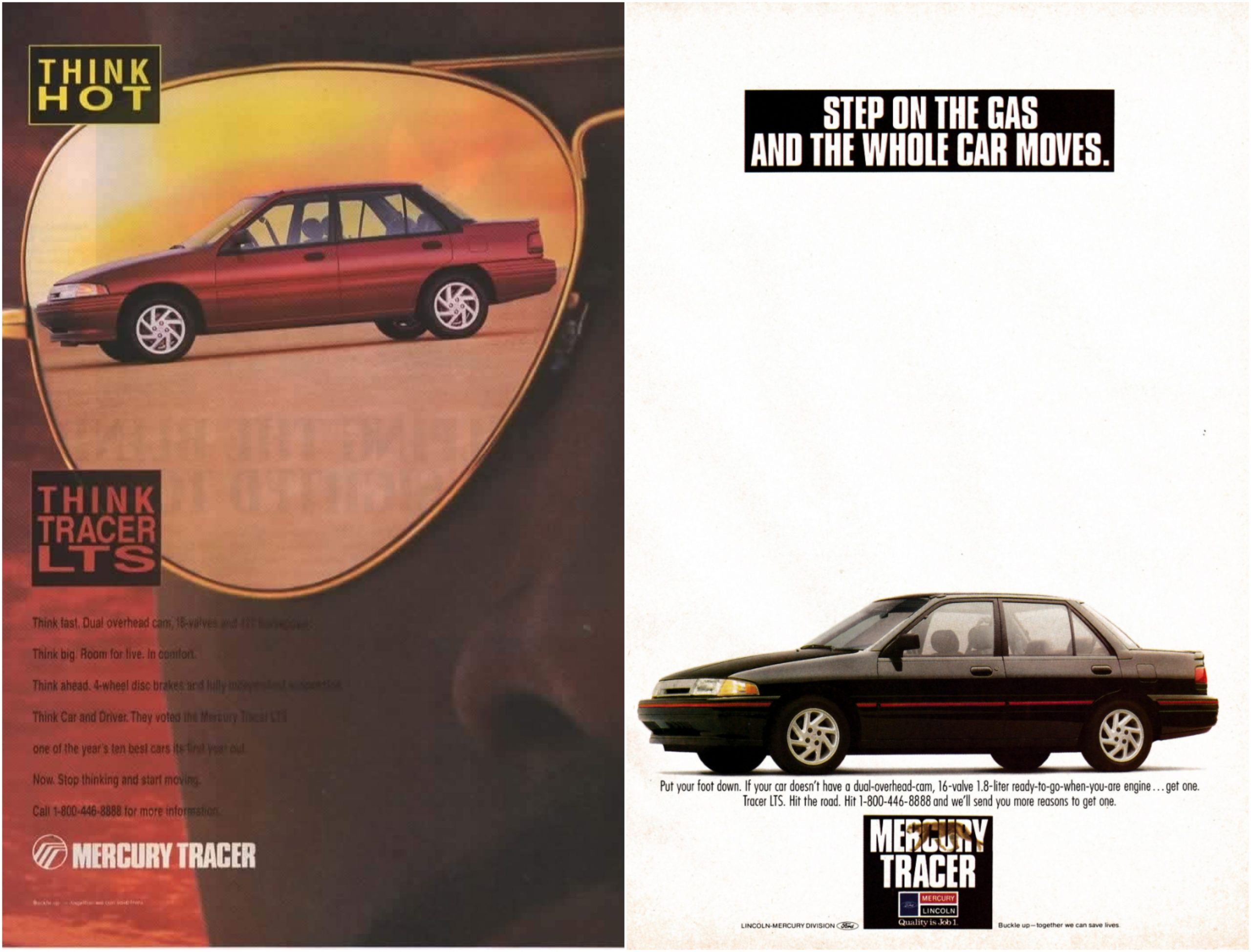 Indeed, our reader is correct when they say that opting for the performance-oriented GT means losing out on doors and space. If you wanted your Mazda-based sedan with the mightier engine, you had three choices. Mazda itself gave you the engine with the Protegé LX, you could also pick up the Ford Escort LX-E, or you could get the Mercury Tracer LTS.

The former two brands might have been more popular, but the Tracer was and still is worth a look. Check out the lovely cabin of the Merc in this retro MotorWeek review:

The Tracer didn’t just impress the friendly John Davis of MotorWeek, but it also blew Car and Driver away. Its testers summed it up as:

This Tracer appears as other models, and in a quite similar form as the Mazda Protegé, but the Tracer LTS gave us more of what we like in a small sedan. There’s excellent fit and finish, enough room, a reasonable price, and a twin-cam four-cylinder engine that takes Tracer driving out of the humdrum and into the high-grin world.

Built at Ford’s plant in Hermosillo, Mexico, the Tracer joins the Honda Civic in providing strong evidence that workers on this continent have no difficulty building high-quality small cars, even if large companies have difficulty making profits on such items.

Tracer drivers will profit nicely, however, from the pleasures delivered by this quick, crisp sports sedan.

During 1991, the showrooms at Lincoln-Mercury dealers will be among the rare places where you’ll find two Ten Best winners on sale.

And yep, this car made the magazine’s 9th Annual 10Best award. By all accounts, it seems like the Mercury LTS is the best of the siblings of these cars based on the same Mazda platform. While I could not find production numbers drilled down to specific trim levels, I was able to find total model production. The Tracer didn’t have horrible sales, but the Protegé beat it by a decent margin, and the Ford Escort sold more than twice as many Tracers and Protegés combined.

At any rate, the Tracer never made it to the new millennium, getting axed in 1999 at the end of its third-generation, just a few years sooner than the Escort itself did. And Mercury itself didn’t survive 2011. In an obituary of sorts, Hagerty notes that the Tracer LTS could have been a Civic fighter, but given the competition from its own siblings and the fact that Mercury wasn’t really known as a performance brand back then, it never really stood a chance.

As I sometimes do when I write a car history piece, I tried to find a Tracer LTS for sale. I was sort of surprised to see zero running examples for sale. And the only one that I found on Bring A Trailer sold two years ago. Zero of them have been sold on Cars & Bids. If you find one, I reckon it’ll be cheap. Hold onto it, because who knows how many of these are left out there.

Do you know of a ‘holy grail’ of a car out there? If so, we want to read about it! Send us an email at tips@theautopian.com and give us a pitch for why you think your favorite car is a ‘holy grail.’ A lot of you have already sent us emails, and you bet that we’re looking them over!

Mercedes is a lifelong fan of all things powered by an engine. When she isn't driving one of her five Smart Fortwos or her 14 other vehicles she could be found in the cockpit of a Cessna 172 or perhaps swimming in any body of water that she could find. She also has a deep love for buses of all kinds. Please send her buses. mercedes@theautopian.com Instagram: @mistymotors Twitter: @Miss_Mercedes30 Facebook.com/neonspinnazz
Read All My Posts »
PrevPreviousPeople Are Obssesed With Sleeping In Cars – The Autopian Podcast
NextHyundai Flexes Their Design Chops With Their New Flagship, The GrandeurNext