Hyundai Flexes Their Design Chops With Their New Flagship, The Grandeur

I have to say, the Kia-Hyundai-Genesis family is really bringing it design-wise, lately. Over the past couple of years the designs coming out of these companies has been consistently striking and distinctive, with a strong visual identity and cars that just look, well, great. The Hyundai Ionic 5 and Kia EV 6 come to mind. Hyundai’s design team has focused their collective moist designers’ eyes onto Hyundai’s traditional flagship, the Grandeur, and come up with something dramatic and yet restrained, with a bit of 1980s sensibilities we’ve seen in other recent Hyundais. 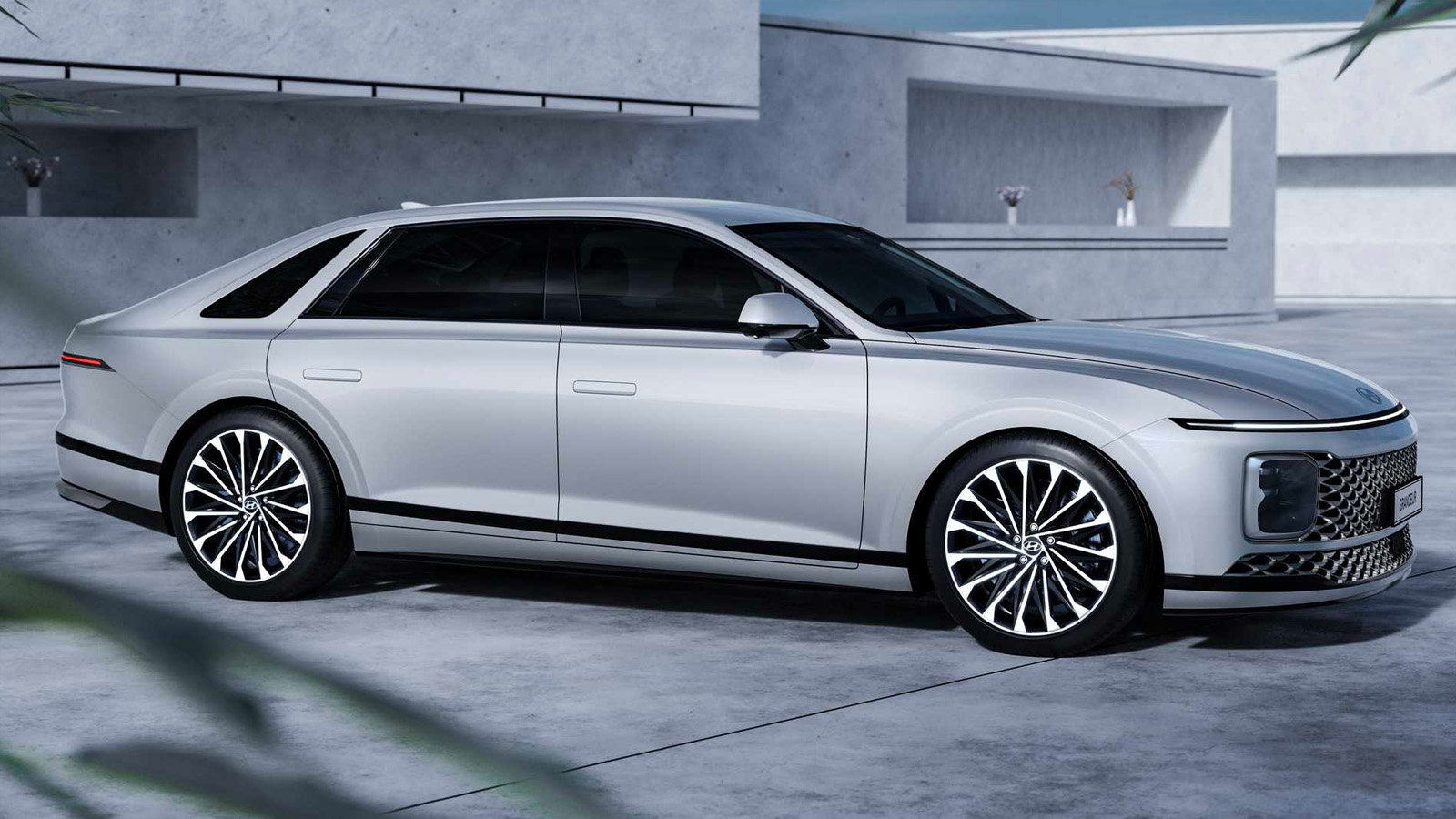 Here in America, we never got the Grandeur under that name, which is pretty much restricted to Korean markets. Most of the world knows it as an Azera, which I thought was a flowering plant until that person at Lowe’s spit on me. In fin-de-siecle 20th century America, we had it as the Hyundai XG, for those late ’90s Hyundai fans. For most of its life, the Grandeur/Azera/XG was a pretty anonymous-looking full-sized sedan.

You could slap almost any badge on that thing, from Toyota to Chevy and nobody would bat an eye. It’s fine, but good luck trying to find something interesting about the way it looks.

This new Grandeur, though, is a very different story. 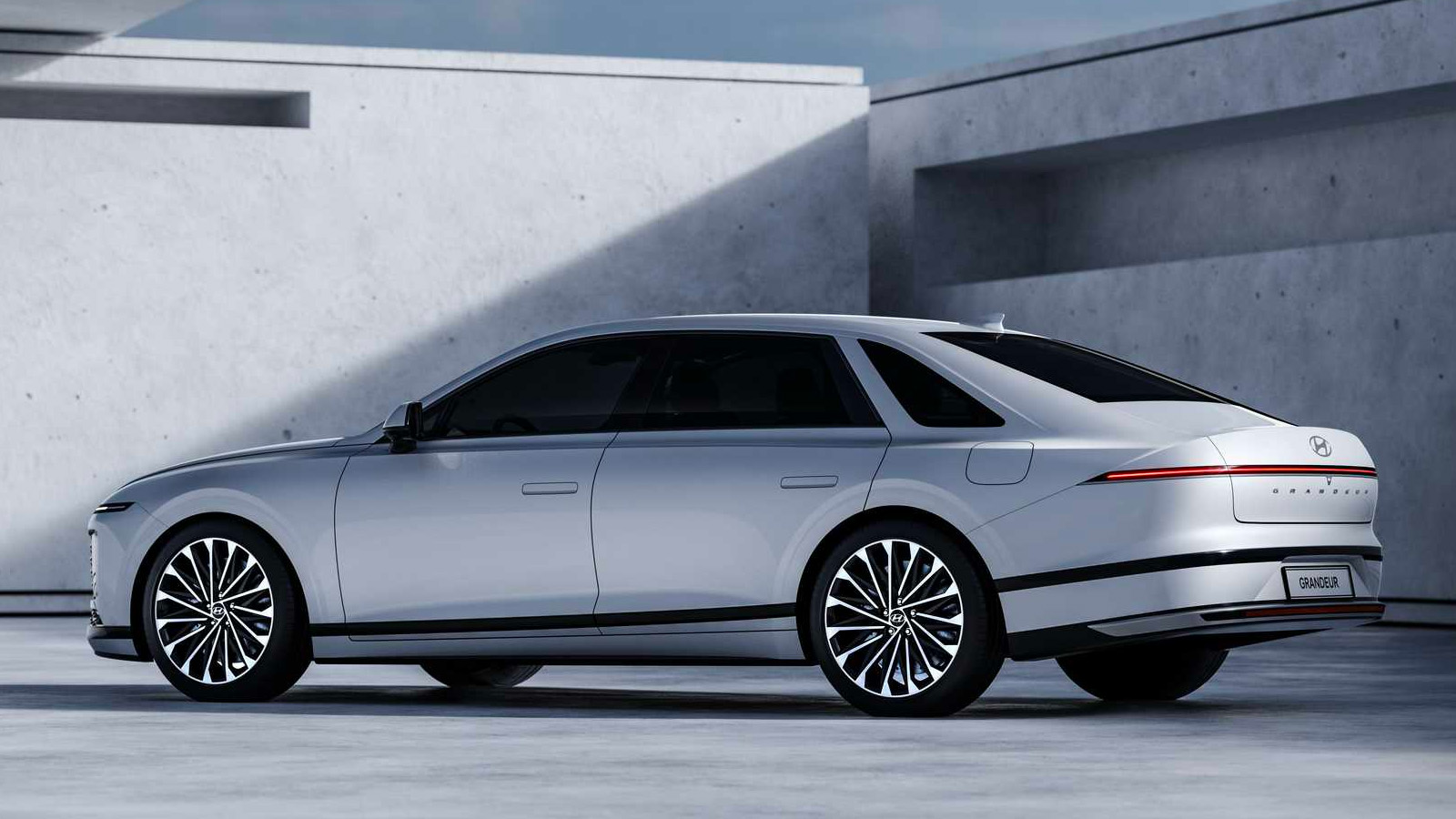 It’s a design that is a bit more upright and less aero-eroded than what’s become the norm recently; while hardly rectilinear, it adapts greenhouse and body proportions from a 1980s car, which I think provides a certain stateliness to it all. It’s a mild fastback design, which is well-punctuated by that triangular rear quarter window. 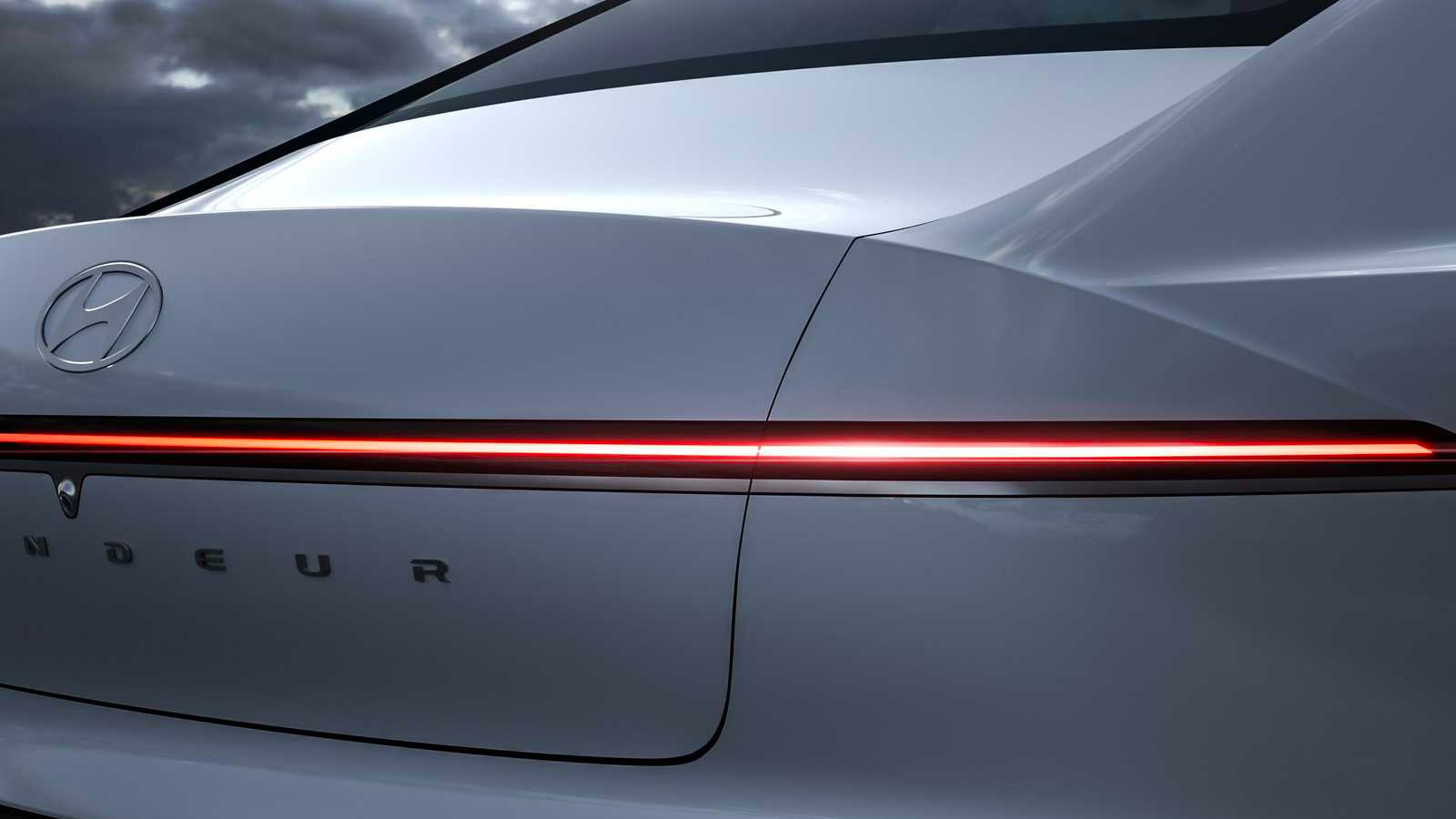 I actually think that the rear quarter design is perhaps the strongest angle, with some very effective use of body cutlines, like the dramatic diagonal from the rear wheelarch that flows up and into the crease that forms the slight rear spoiler.It’s nice when designers accept that body panel lines exist and work with them, instead of fighting against them or trying to pretend they don’t exist. 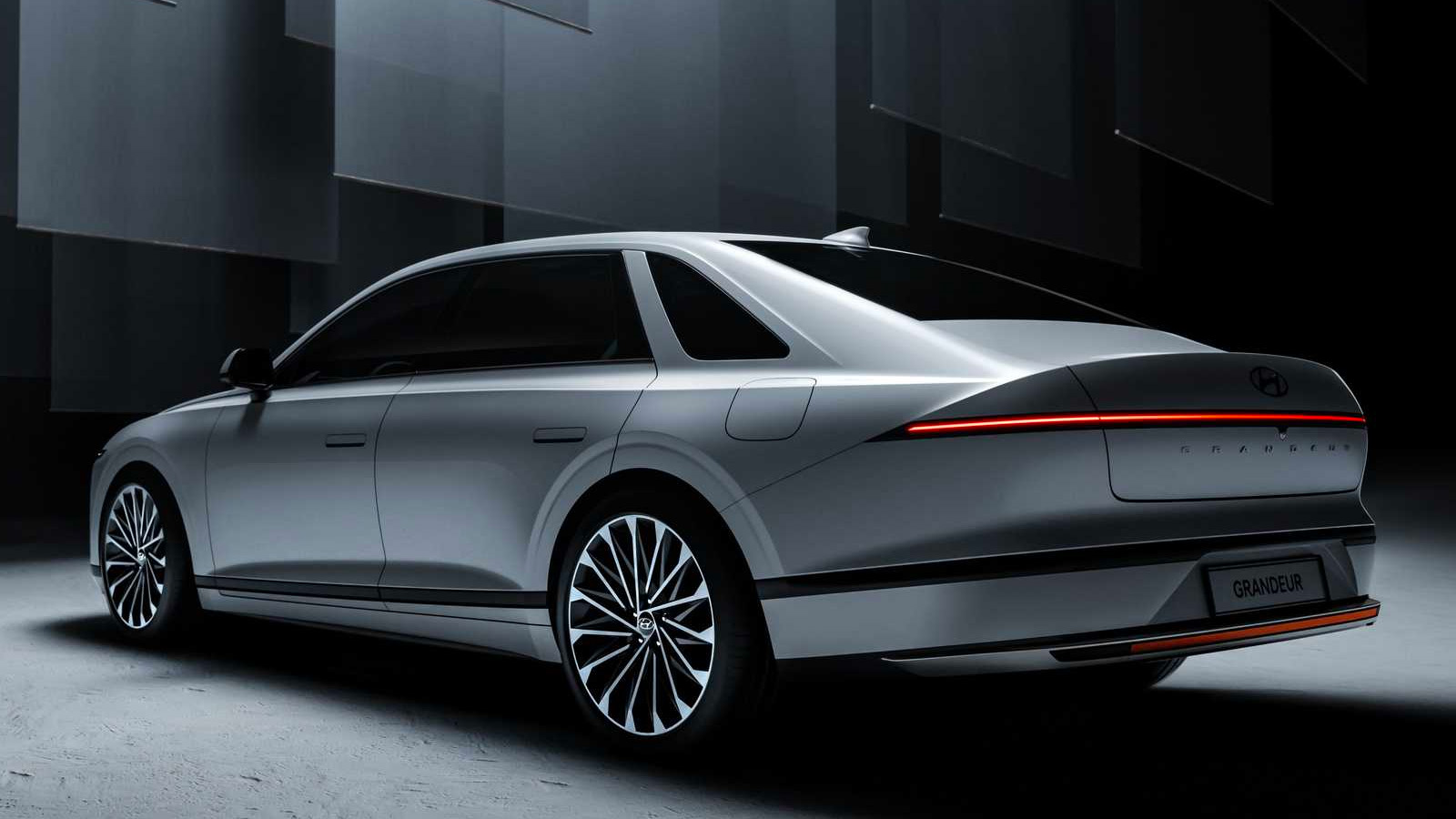 That black stripe that runs along the lower body and kicks up as it wraps around the rear is a sort of almost-retro touch, but, again, it works. That lower red reflector? foglamp? at the base of the bumper does feel a bit tacked-on, though. 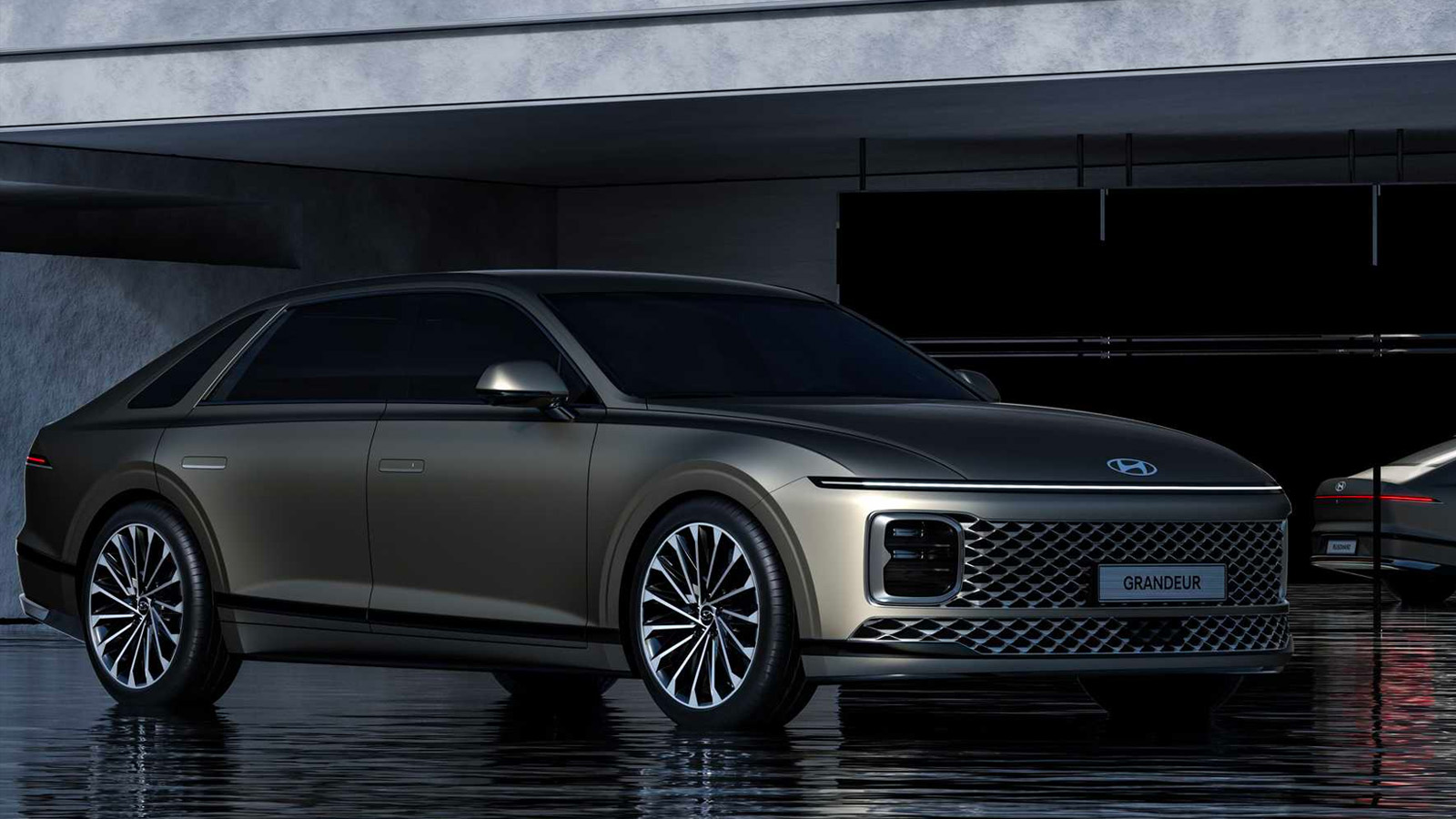 From the front, we can see the design language that Hyundai calls, with typical PR drama, “Seamless Horizon,” and have even named that full width-DRL after it:

One of the model’s most prominent aspects is its pure volume and excellent sense of proportions that balance premium and dynamic styling attributes. The All-New Grandeur is defined by a Seamless Horizon Lamp inspired by the first light of dawn, accentuating the model’s wide stance and harmonizing with its parametric jewel grill. The Seamless Horizon Lamp is a perfect fusion of technology and art and characterizes Grandeur’s future-focused design sensibility. 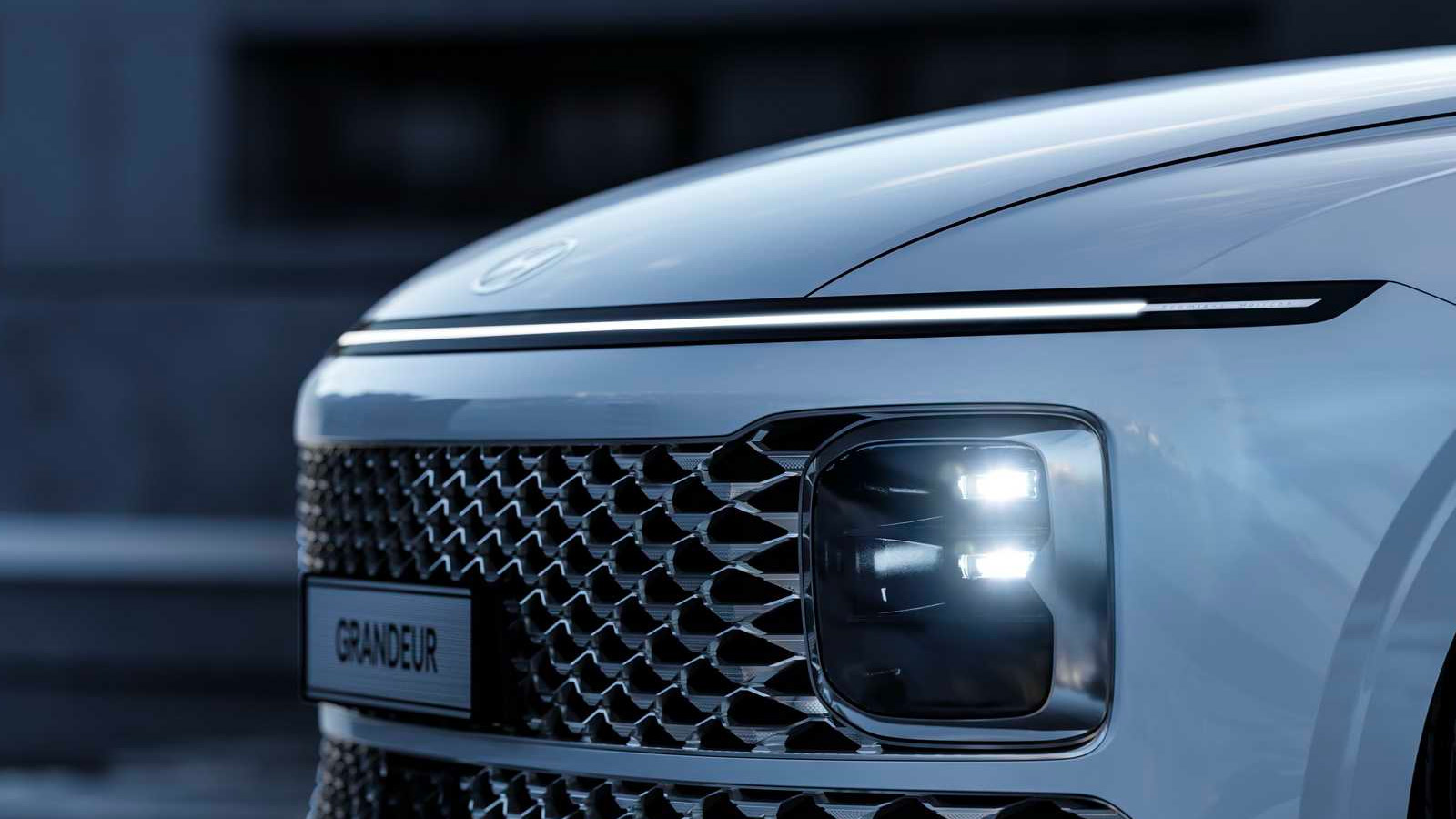 As has been Hyundai’s practice on many recent models, the actual headlamps are in lower-set pods, here integrated into the sides of the grille, which is a full-width crosshatch pattern. 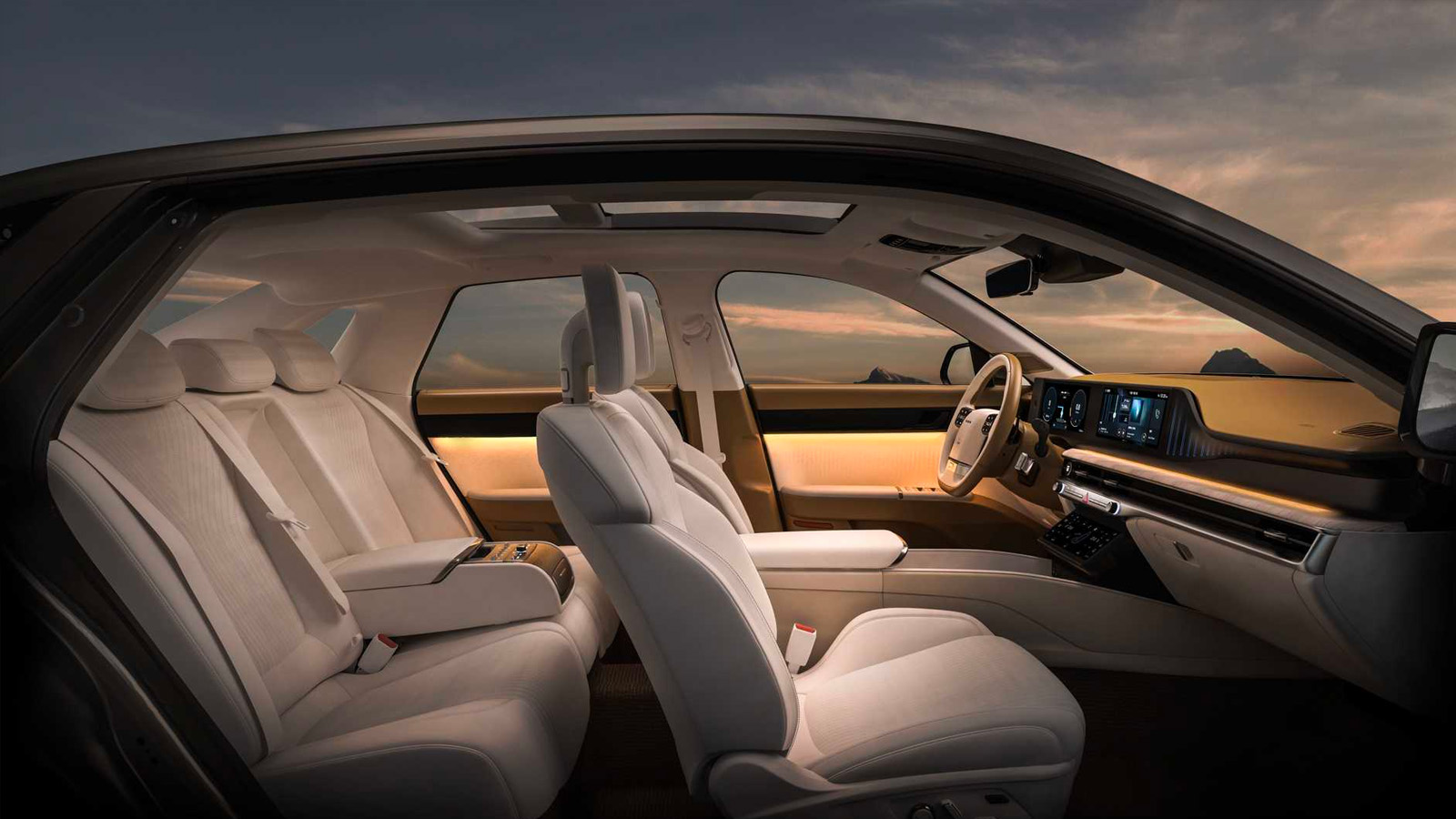 It’s possible this image is hinting at a bold, one-side-totally-open design, but I suspect it’s actually just to show the interior, which is fairly conventional luxury sedan stuff. 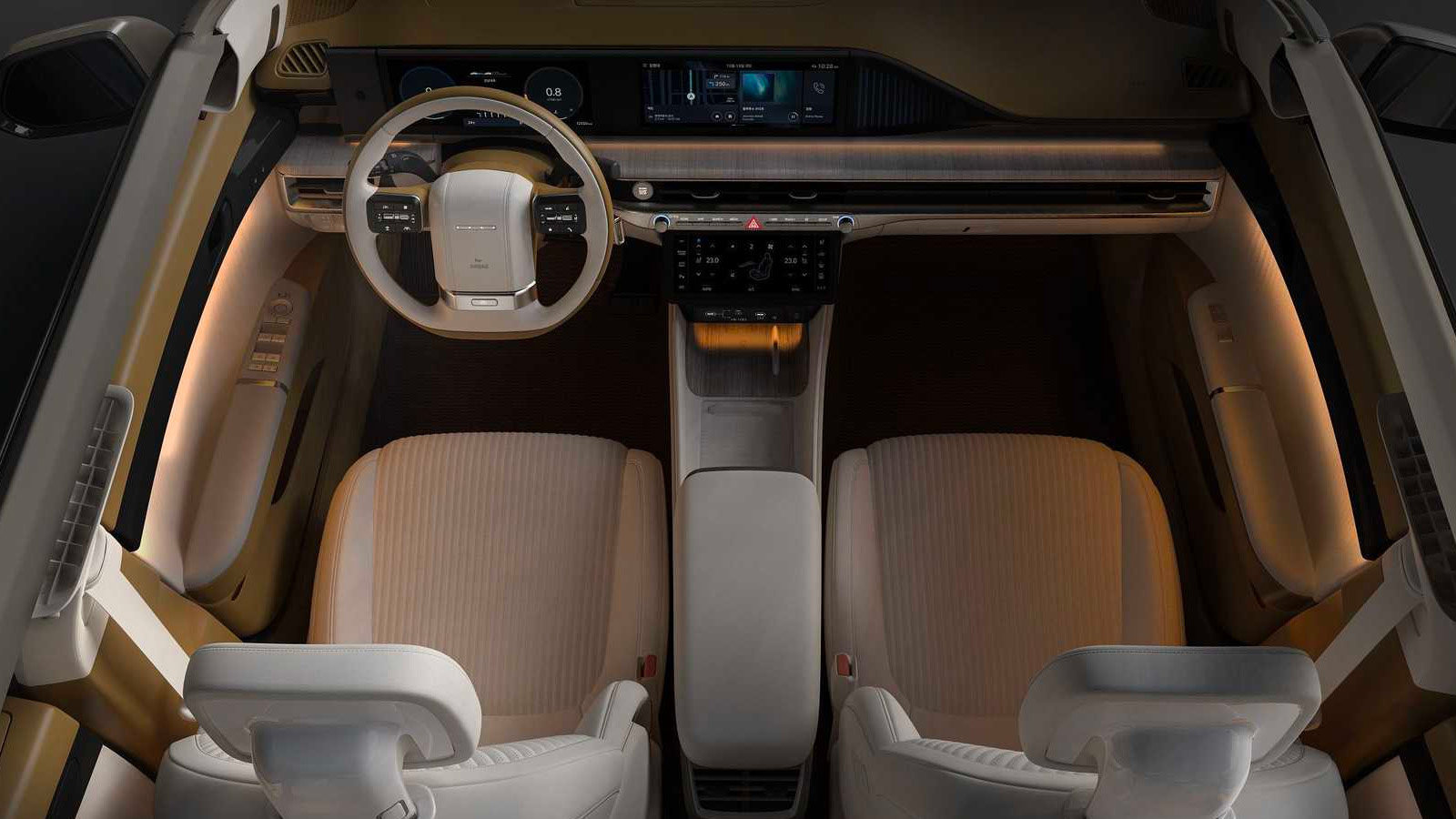 The headrests are interesting, though, and like so many other modern designs, the dash is a long, unbroken LCD display, and Hyundai says the steering wheel is “inspired by the single-spoke design of the first-generation Grandeur” for you first-gen Grandeur-heads. 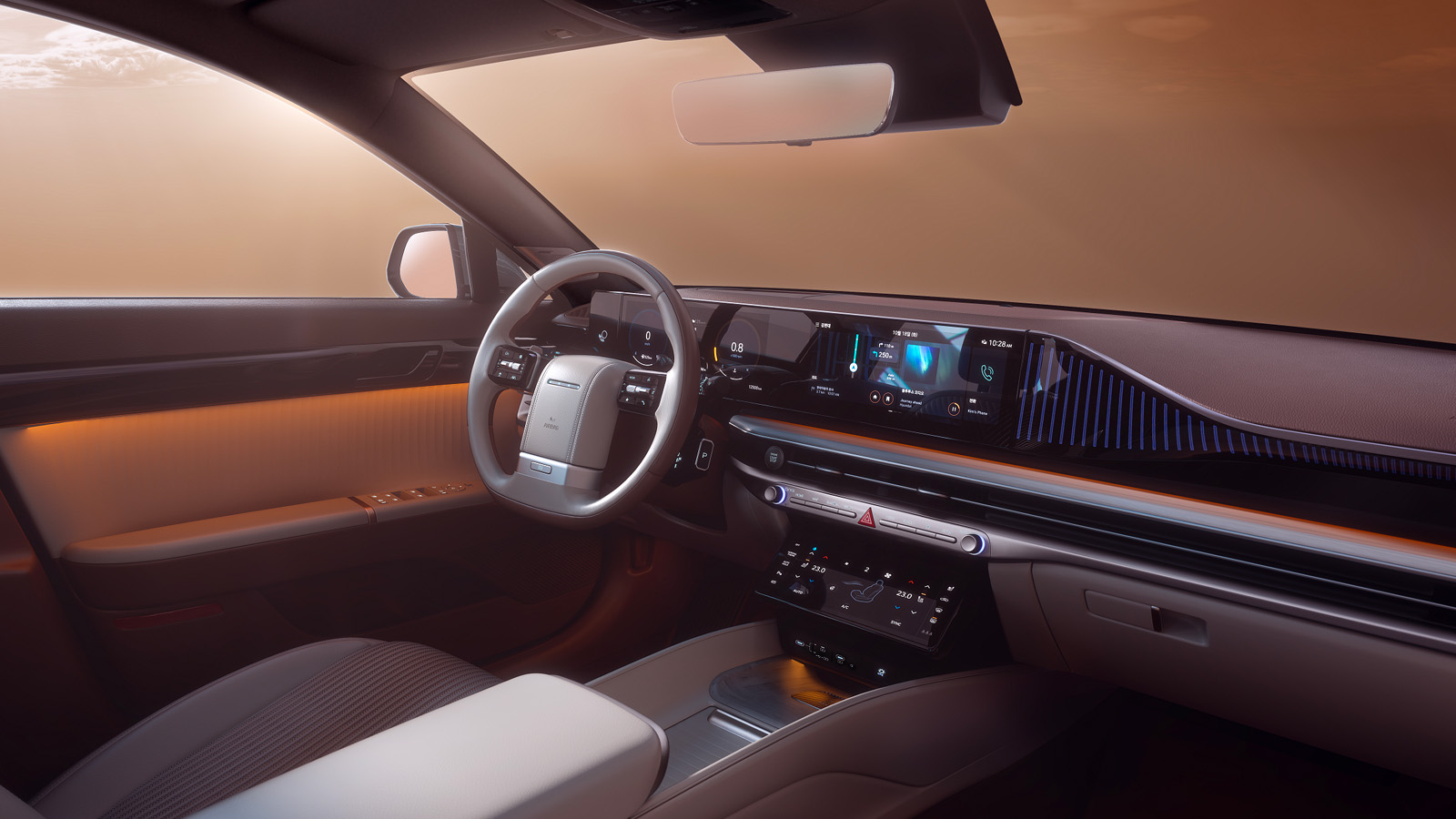 There also seems to be some sort of linear light-effects going on he passenger side of the dash as well, emphasizing the bit of a twist happening on that panel. Also, I’d like to note a nice, simple, mechanical glove box release. See that, GM?

There’s no mention of cost or powertrain details yet, and it’s not clear if this will make it to America, even as an Azera, but who knows? It’s another nice reminder that Hyundai has been killing it design-wise, regardless.

I'm a co-founder of the Autopian, the site you're on RIGHT NOW! I'm here to talk to you about taillights until you cry and beg me to stop, which I absolutely will not. Sorry. Hug? Also, David's friend.
Read All My Posts »
PrevPreviousHoly Grails: The Mercury Tracer LTS Was An Underrated Performer With The Body Of A Practical Sedan
NextWashington DC Wants To Restrict America’s Greatest Contribution To DrivingNext