The Ford Transit Connect is a great little van. It offers van utility in a compact package and in recent years, I’ve seen people using them for rally racing, too. But Ford never offered us a performance version of the Transit Connect, and soon it may not even be available on the market. That wasn’t good enough for one Colorado man, who mated the drivetrain from a Focus ST with a Transit Connect to make the Transit Connect ST that Ford didn’t sell.

As we’ve reported back in September, the small commercial van is dying off in America. At one time you could buy a Chevrolet City Express, a Nissan NV200, a Ram ProMaster City, the Mercedes-Benz Metris, and the Ford Transit Connect. These vans offered big commercial van practicality at a smaller size. But, as we pointed out, sales of the small vans are nothing like their bigger siblings, and have been decreasing. After the end of this year, we’ll be left with just the Transit Connect and the Metris, and both are expected not to survive past 2023. 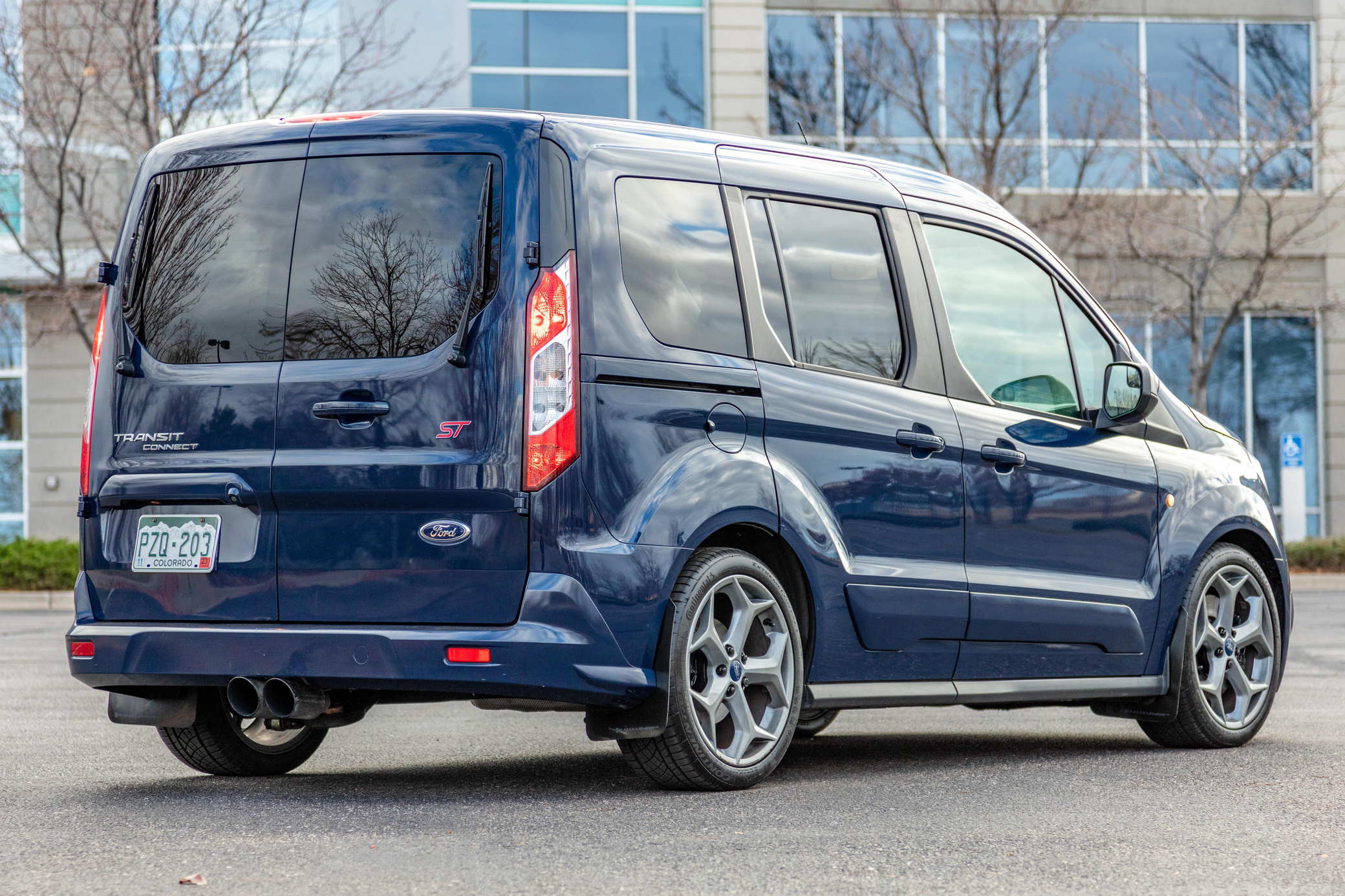 It’s a shame that they didn’t catch on, because these vans have some potential. Unleashed onto the American market in 2009, the Ford Transit Connect has proven itself to be a versatile vehicle. Sure, they’re great for businesses that don’t need bigger vehicles like florists and local delivery drivers, but people have found out that they’re competent rally cars, too. Longtime Opposite-Lock member i86hotdogs races a Transit Connect in RallyCross, and honestly, the sight of the thing is just beautiful. 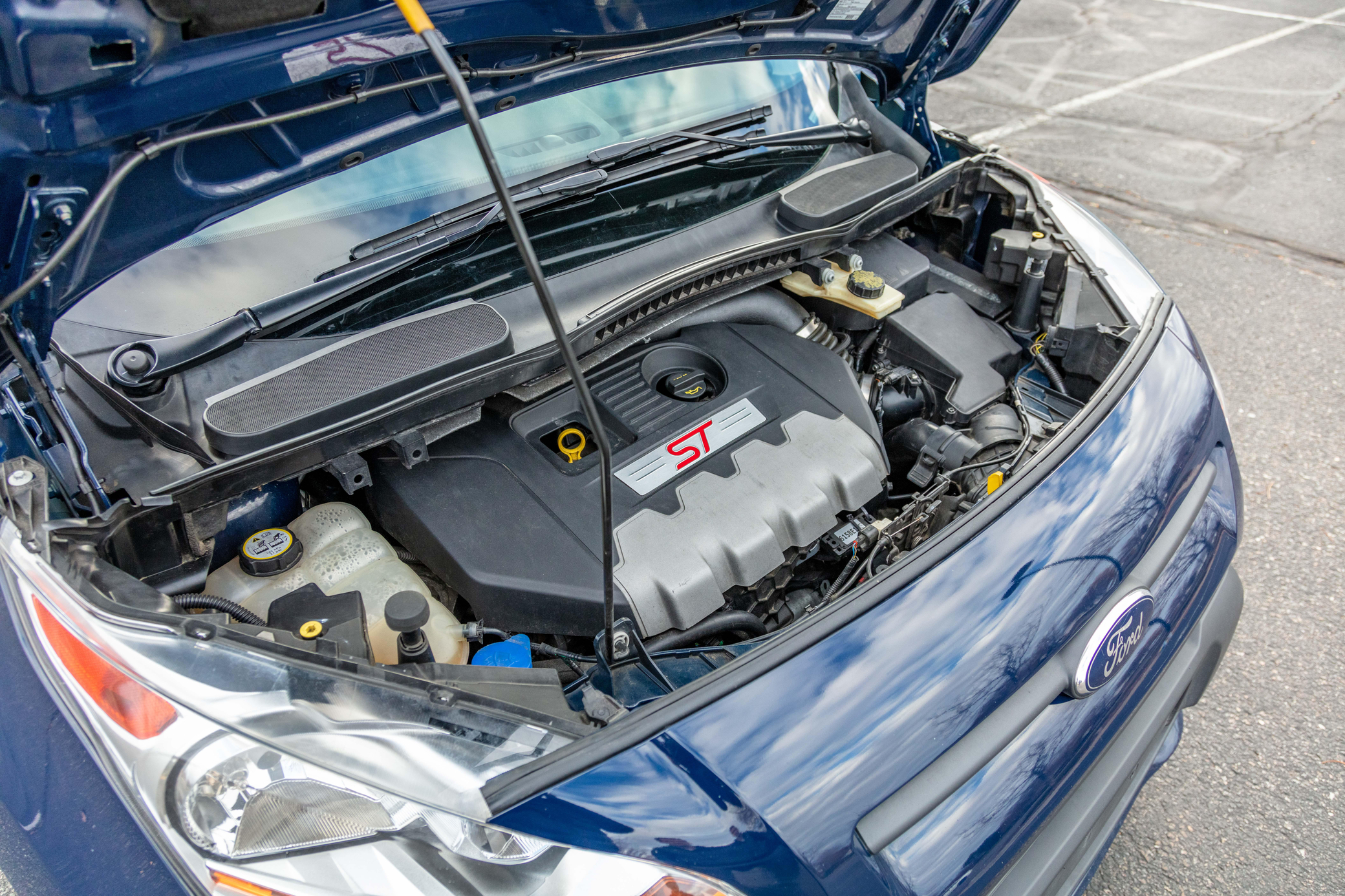 The story for this one begins in 2016, when the seller–who goes by dotmaster206 online–joined the FocusST.org forum with a wild idea. They were looking for a cheap donor Focus ST that could be used for a transplant into a short wheelbase Transit Connect wagon. Dotmaster206’s goal? Make something as close to what a legitimate Transit Connect ST would be as they could get. A month after planting the seeds, dotmaster206 had a van sourced from New Jersey and drove it to Colorado. Then, just a couple of months later, the builder got a salvage title Focus ST from a seller on Craigslist that smoked a little. The two vehicles were shipped to Vaccar’s Master Garage in Florida to be combined into one awesome machine.

Combing through the build thread, Vaccar first diagnosed the smoking issue and a backfiring issue before starting conversion work. It was discovered that the donor Focus ST didn’t have a limited-slip differential, so one was ordered. They also found out that the ST’s clutch pedal was a perfect fit. And since the Transit Connect was sold with a manual transmission in Europe, the cutout for the hydraulic line was already there. Even the center console from the ST seemed to fit well. 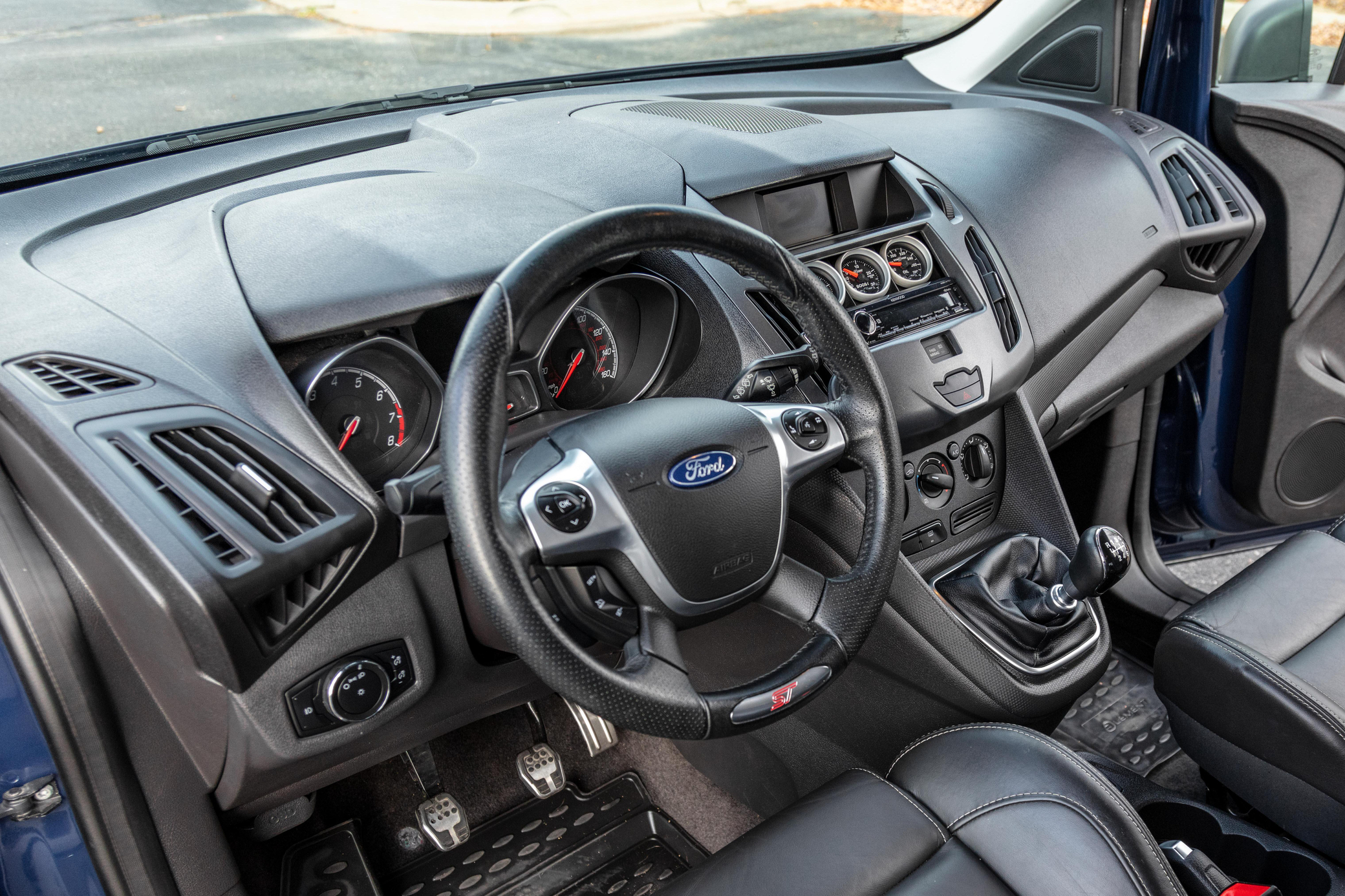 The build stretched out until 2021, and digging further through the thread, the Vaccar team even went through the effort to swap the Focus ST’s wiring harness into the Transit Connect. The build had its first engine start in 2018 and, in 2019, finishing touches were being added like a new sound system, auxiliary gauges, and who can forget the ST stickers!

In 2020, the van was mostly finished, but the build team ran into a roadblock with the van’s remaining systems and the Focus’ systems not talking well with each other. Dotmaster206 reported problems like the Focus ST’s cluster showing PRNDS (the donor was an automatic), an air-conditioner that stops working when outside temperature sensors randomly drop to -40 degrees, and windshield wipers that didn’t work. 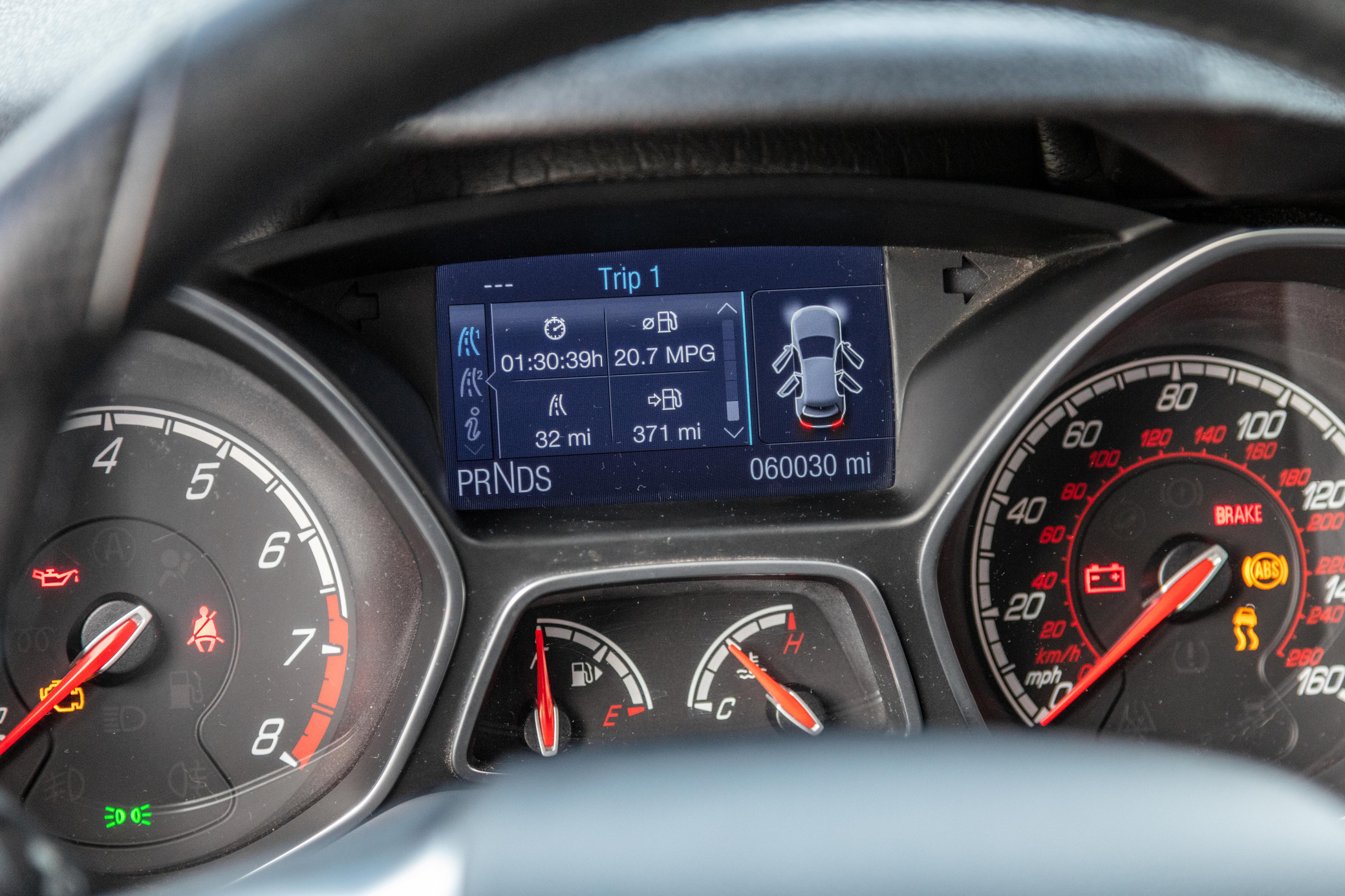 The thread goes cold after 2022, with dotmaster206 saying that the van was drivable, but still not working in some areas. That brings us to this epic auction, where one lucky person gets to finish what was started on this beast.

Under the hood is a 2.0-liter turbo four from a 2014 Focus ST. This is normally good for 252 horsepower and 270 lb-ft torque, but there have been a few mods added. Those include a COBB Tuning “Stage 2” tune, turbo inlet pipe, and exhaust, Mishimoto radiator and intercooler, SPEC Clutch “Stage 3” clutch, MFactory limited-slip differential, the six-speed manual from a Focus ST, and more. It’s unknown what kind of power that the van is making now, but even with stock Focus ST power, the van is making more than the 2.5-liter four’s 169 HP and 171 lb-ft torque that it made from the factory.

And given the ST wheels and Recaro interior, this van really does look like something that Ford itself could have made. 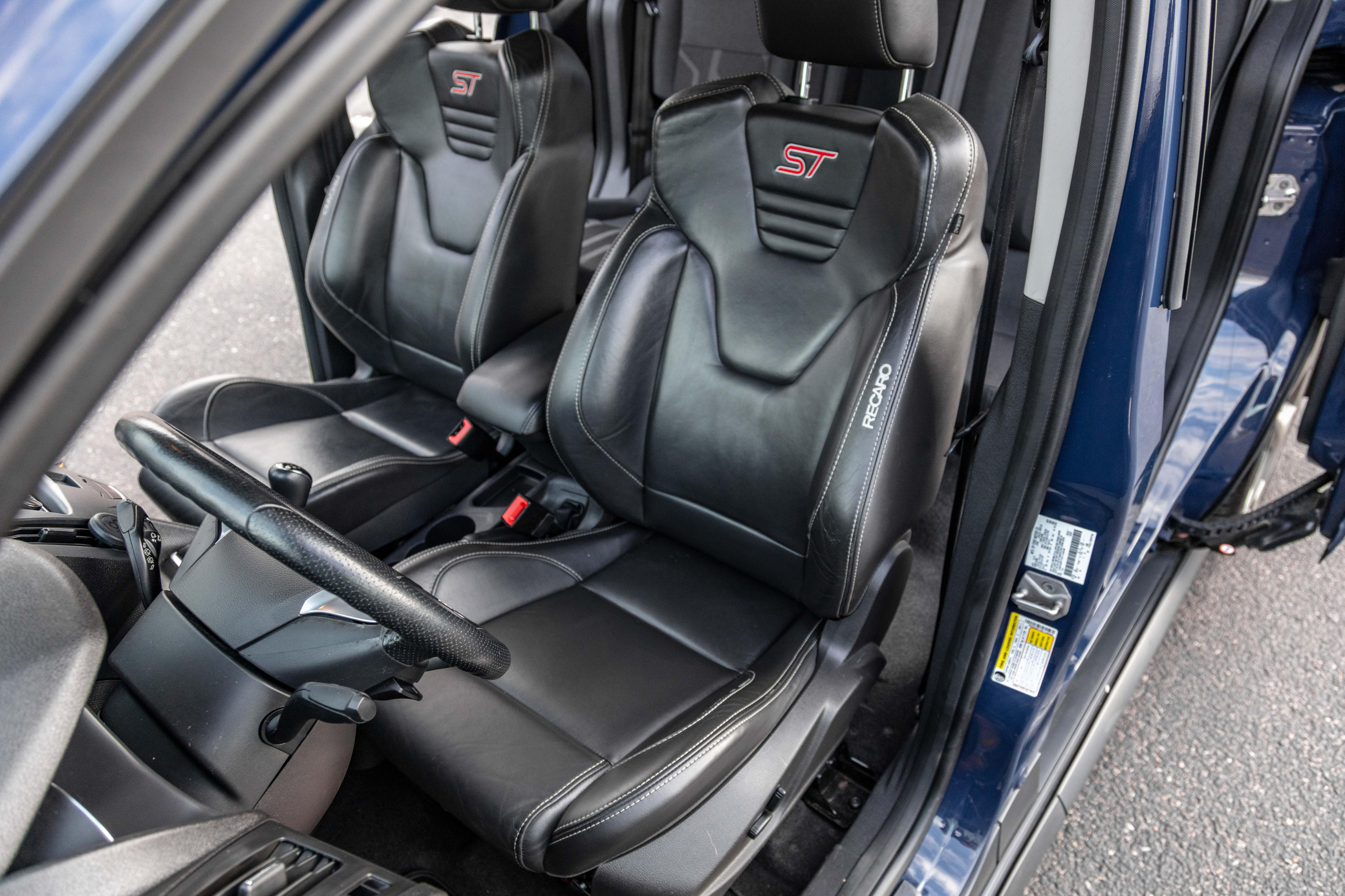 Unfortunately, not everything is as perfect. The instrument cluster from the Focus ST is currently programmed to display chassis mileage, and thus the total mileage of the van is unknown. ABS and traction control also don’t work, and present you with a Christmas tree on the dash. The temperature display still says -40 degrees, but now during engine start.

Other odd problems include radiator fans that run full speed no matter what, a problem where the power steering stops working for about 10 feet, and an air-conditioner that engages “after driving for a few blocks.” These appear to be the unresolved issues from when Vaccar finished the build in 2021 and that the seller believes could be resolved with someone who knows how to program these systems. The rear camera also doesn’t work, though that’s because the aftermarket stereo doesn’t connect with the camera. However, despite the issues, the seller has managed to put 5,000 miles on the van post-swap. 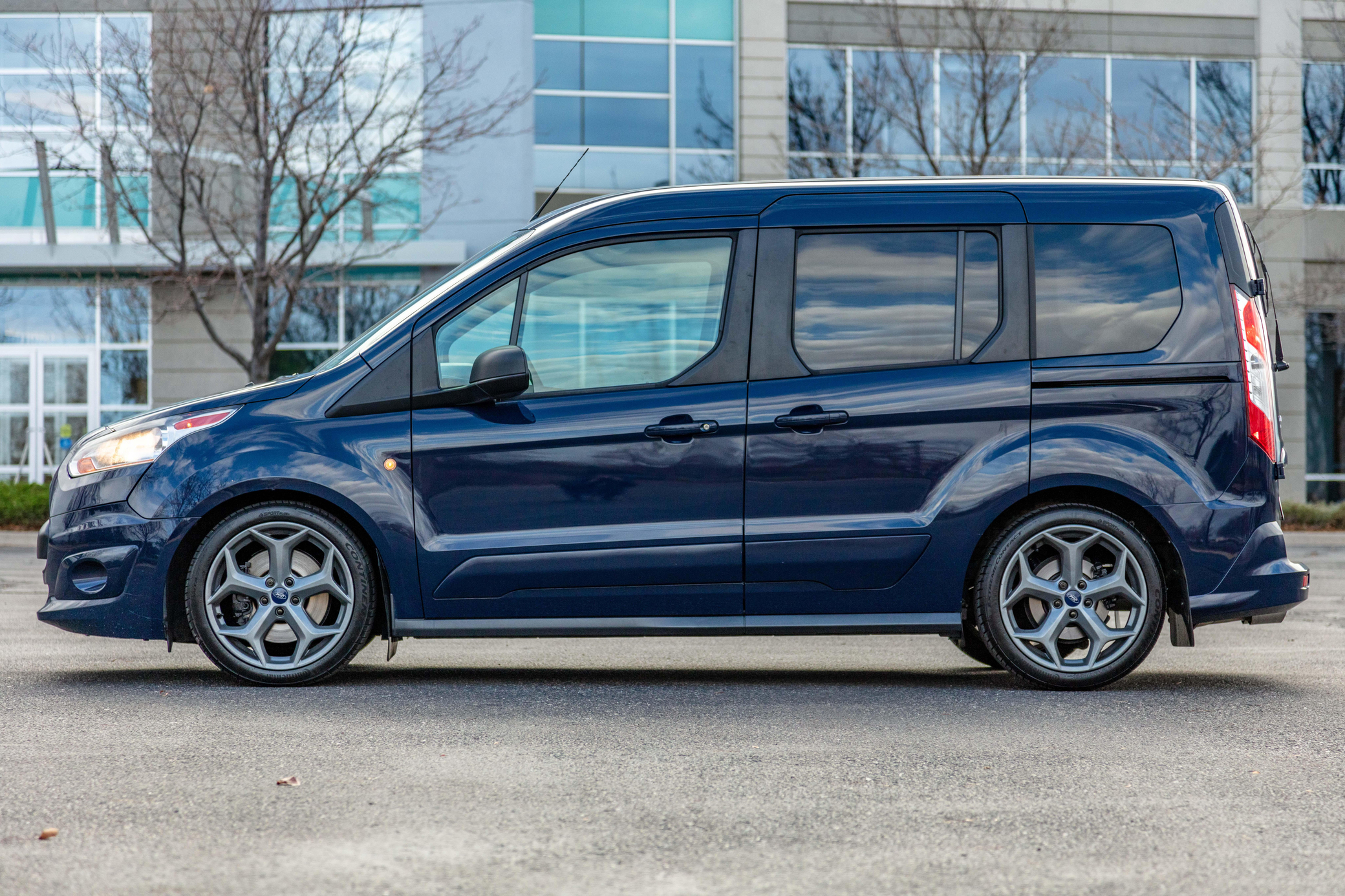 It’s possible that if someone combed through all of this they could maybe get some or all of these features working correctly. But honestly? I’d just rock it as-is as a tire peeling rally van. Other good news include the fact that the van does pass emissions, so you could likely register this in any state that doesn’t frown upon engine swaps. If you want it, bidding is at $18,250 with four days to go on Cars & Bids.

Mercedes is a lifelong fan of all things powered by an engine. When she isn't driving one of her five Smart Fortwos or her 14 other vehicles she could be found in the cockpit of a Cessna 172 or perhaps swimming in any body of water that she could find. She also has a deep love for buses of all kinds. Please send her buses. mercedes@theautopian.com Instagram: @mistymotors Twitter: @Miss_Mercedes30 Facebook.com/neonspinnazz
Read All My Posts »
PrevPreviousHere’s What The 2023 Hyundai Ioniq 6 Is Like In Person And I’m Happy To Say It Has a Frunk And No Touchscreen Glove Box Opener
NextLock The ‘Center Diff’ And Send It In The 195-Horsepower 2024 Kia SeltosNext