We’ve been talking about the new 2023 Hyundai Ioniq 6 EV for months and months now, ever since it was leaked in June, and we’ve written about it a lot since then, because it’s a very exciting-looking new EV from a company that’s been killing it lately, EV-design-wise. We’ve covered the look and the hard numbers and the specs and we’ve heard guesses that it’ll start somewhere in the low-to-mid $40,000 range, but so far we haven’t seen it in person, touched it, smelled it, licked it, communed with it. But now I have and I’m gonna tell you all about it, so prepare yourselves accordingly. 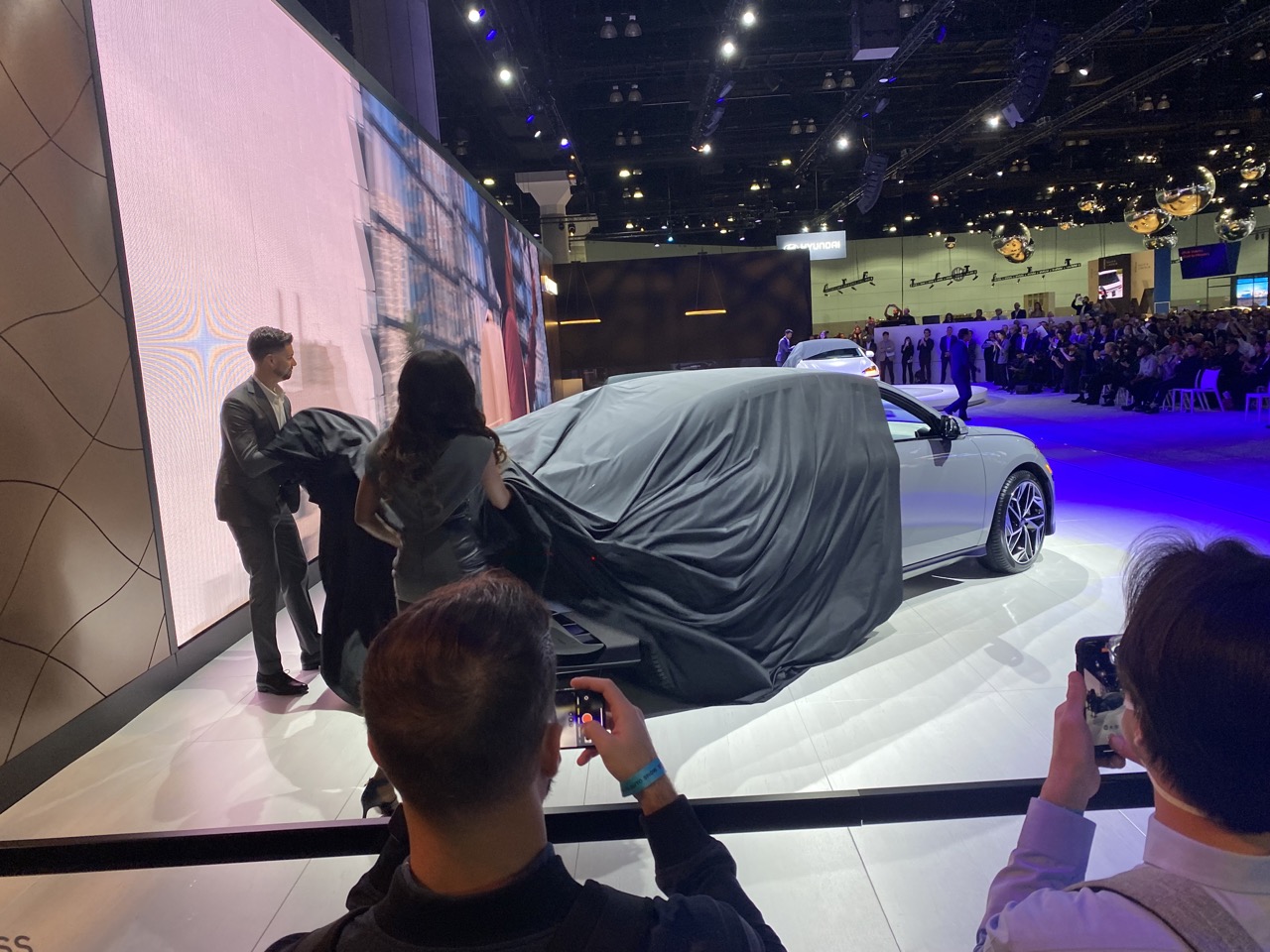 I pushed my way through the crowd of eager journalists, delivering strategically-placed bites to hips and midsections to get people to move, and fought my way to the front row, just in time to see a pair of likely working actors you should IMDB removing the cover. 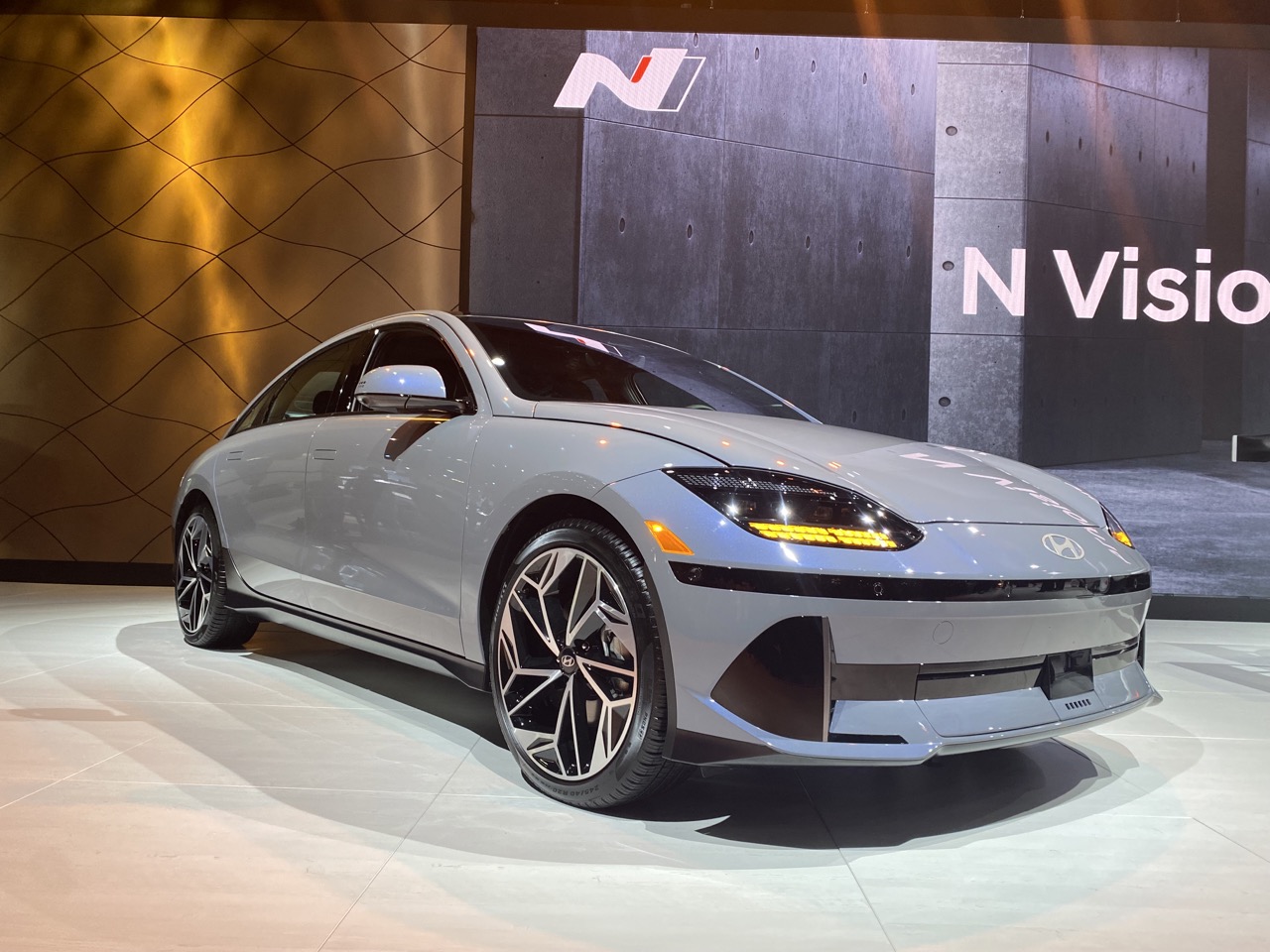 And the result is great! The Ioniq 6 looks fantastic in person/automobile, I think, and it’s genuinely midsized – think Oldsmobile Aurora sized – and the proportions work well. Both ends feel like they have a lot of unashamed Porsche influences, something perhaps unexpected from a Korean electric sedan, but it works. 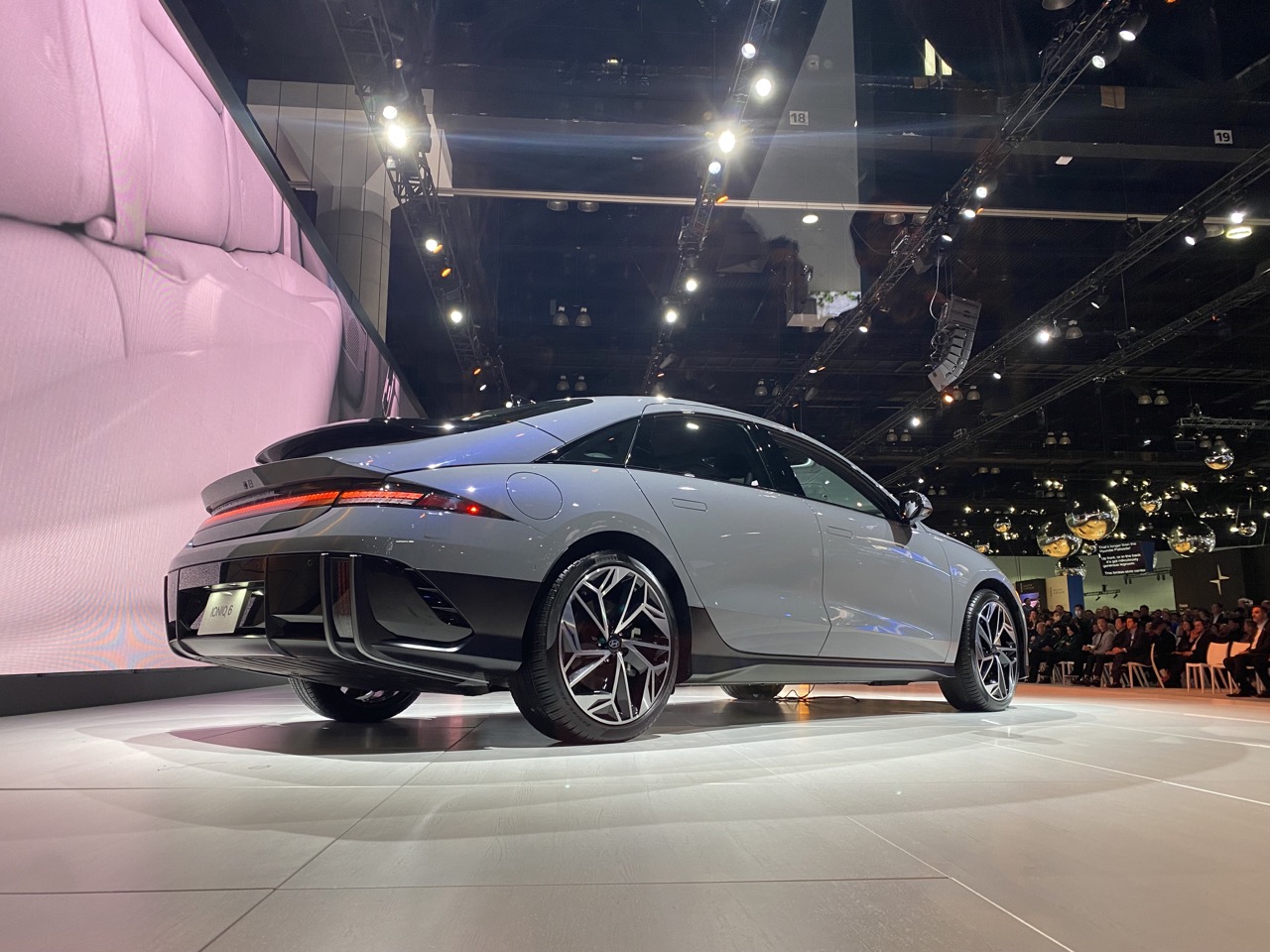 The dramatic curve of the roofline that flows into the tail is unusual and thankfully doesn’t feel like every other damn thing on the road today. The full-width, again very 911-style heckblende taillight looks great and the “Parametric Pixel” lighting design language is distinctive and really helps push the unique identity of the car. 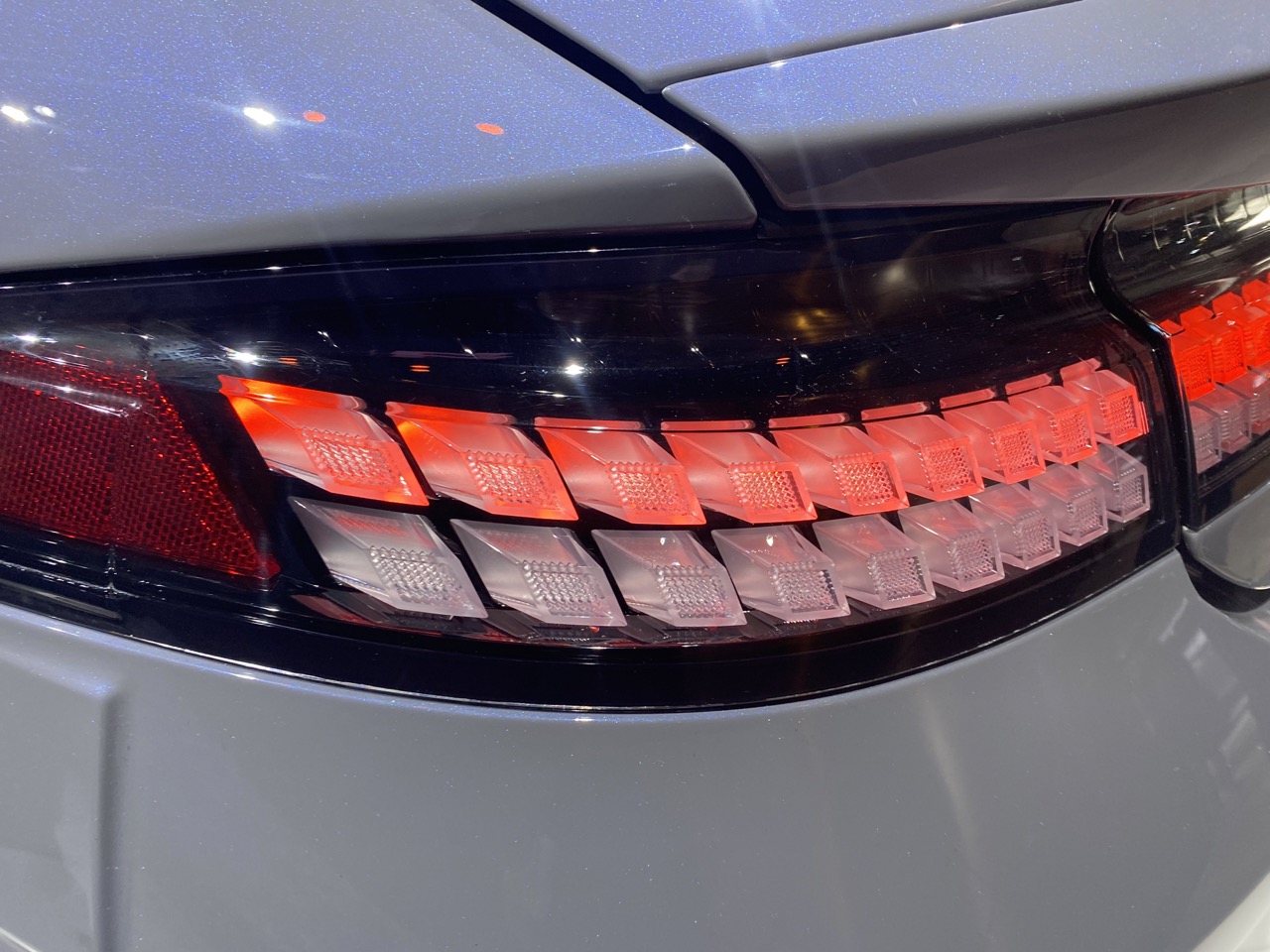 The individual pixel elements are these little cubical units I want to grab with my damp fingers, and it’s repeated up front in the DRL/indicators: 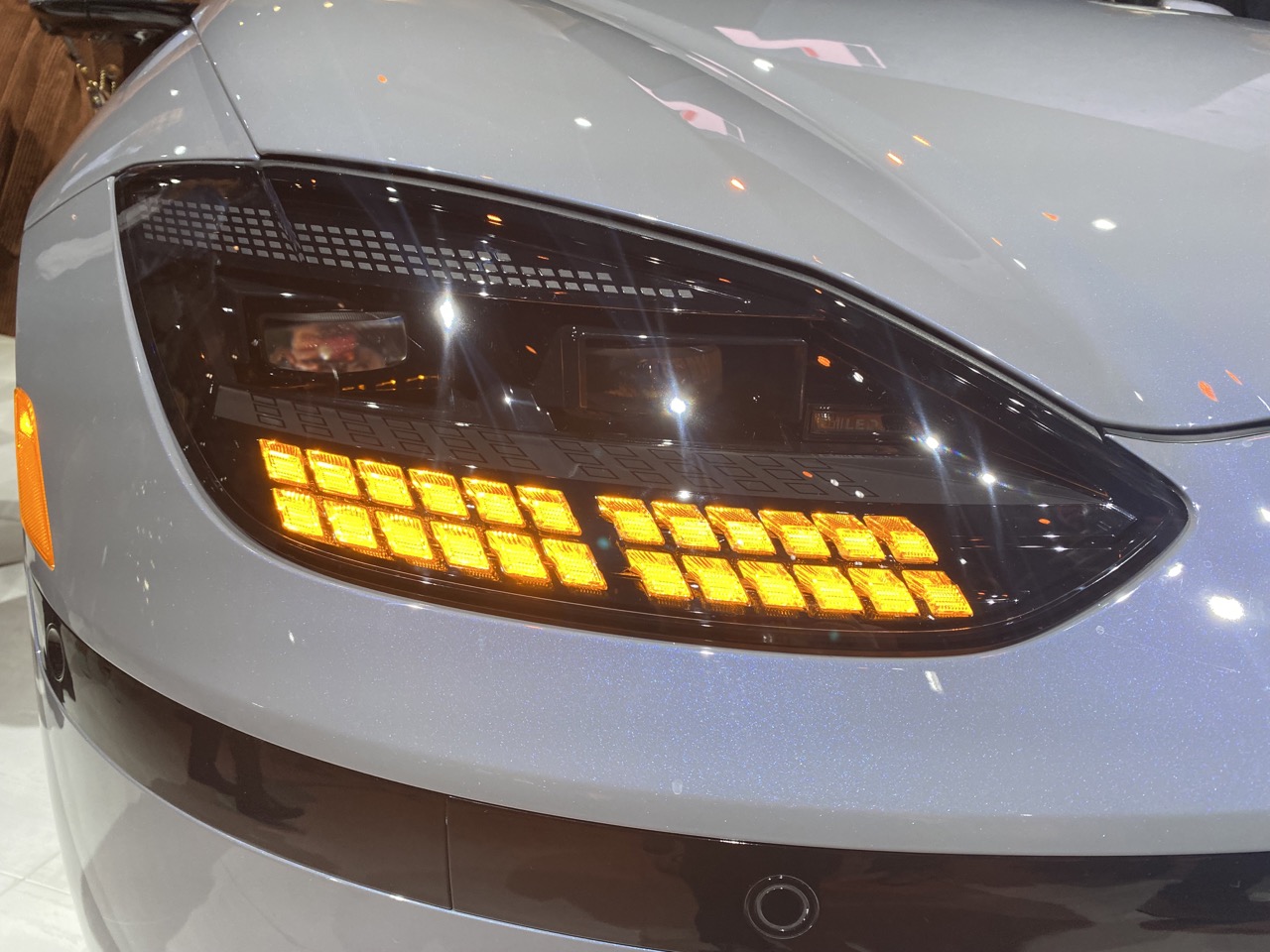 Since I actually got to touch the car, I decided to pull levers and push buttons and open some shit up, so let’s check out the trunk: 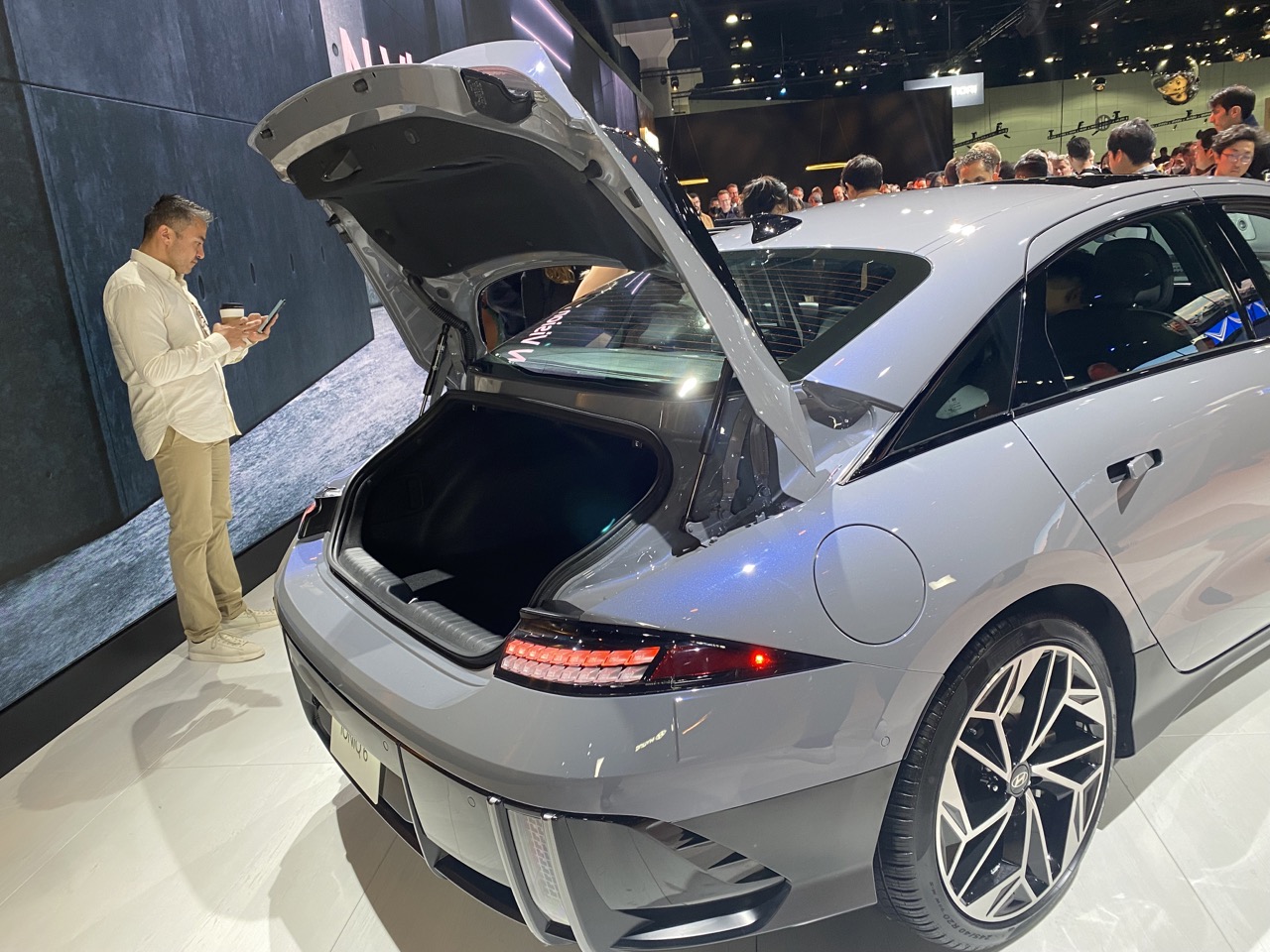 First, it’s not a true hatch, but it is an absolutely colossal trunk lid, and the actual trunk aperture is nicely sized, too. Plus, that trunk is deep, deep like the poetry I sent my various junior high crushes, just much better finished and less empty: 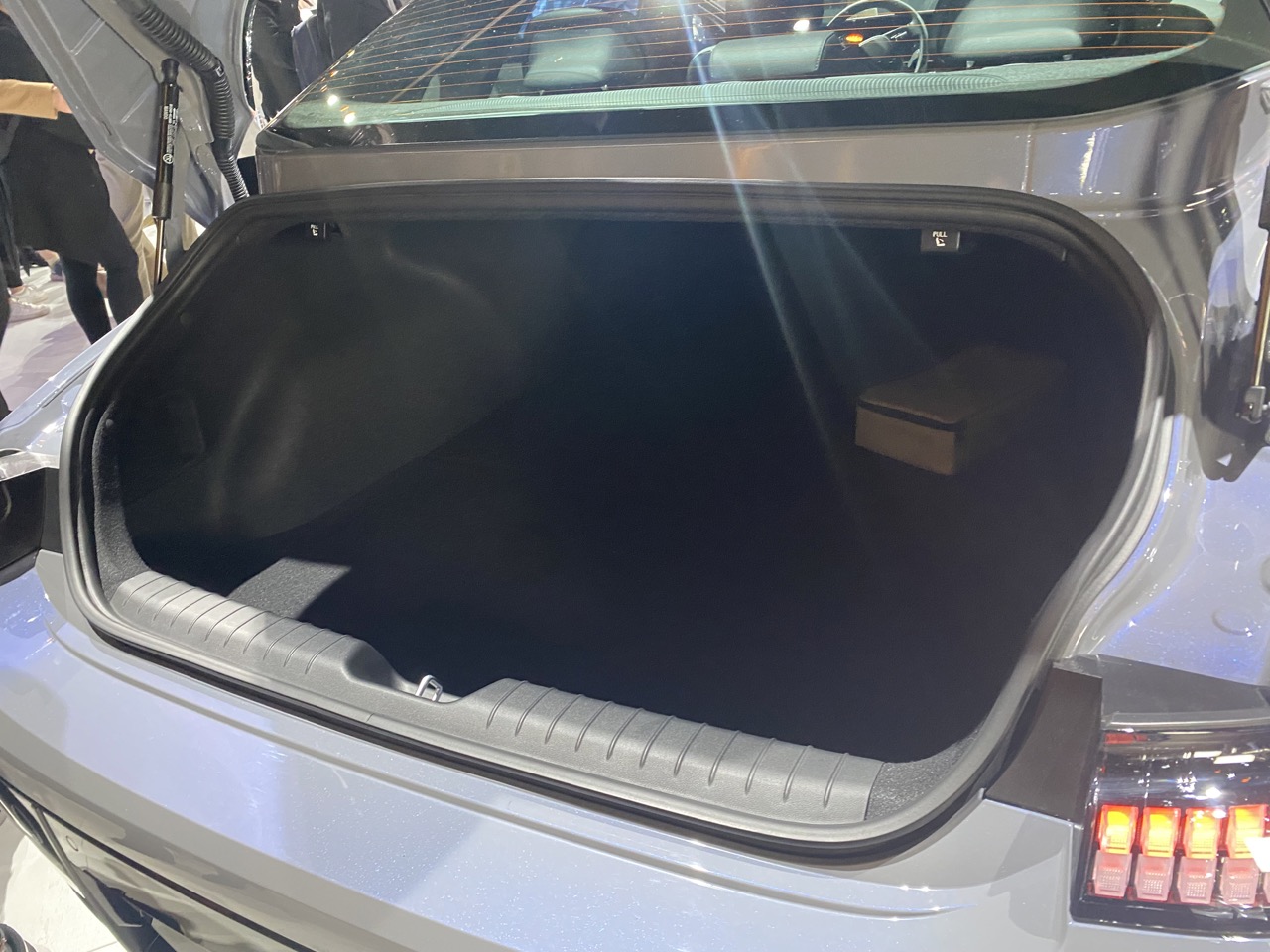 But if you feel it’s base or vulgar to force your belongings into the rear of a vehicle, like some sort of filthy animal, I’m happy to report that unlike certain other carmakers I could mention, the Ioniq 6 has a small-but-usable-looking frunk: 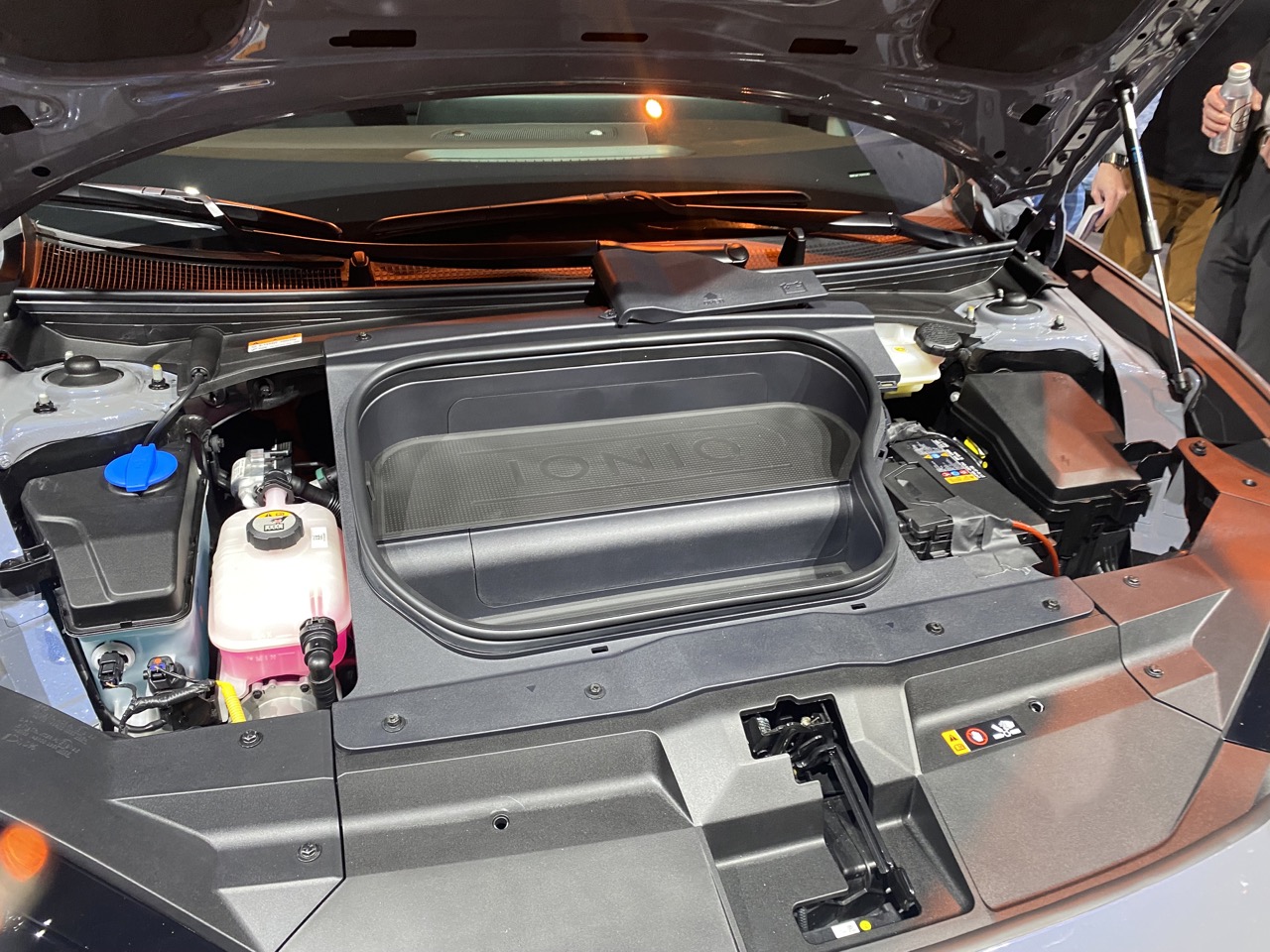 It’s not big, but it’s big enough to do an EV’s frunk’s basic job: to hold cables and chargers and first aid kits and other random stuff that normally would be banging around in the rear, getting in the way of everything. They took the time to carve out some space and I appreciate the designers and engineers for that.

Another important detail that has become important in Our Modern Age: the glove box opens with a simple, basic latch and not some touchscreen horseshit: 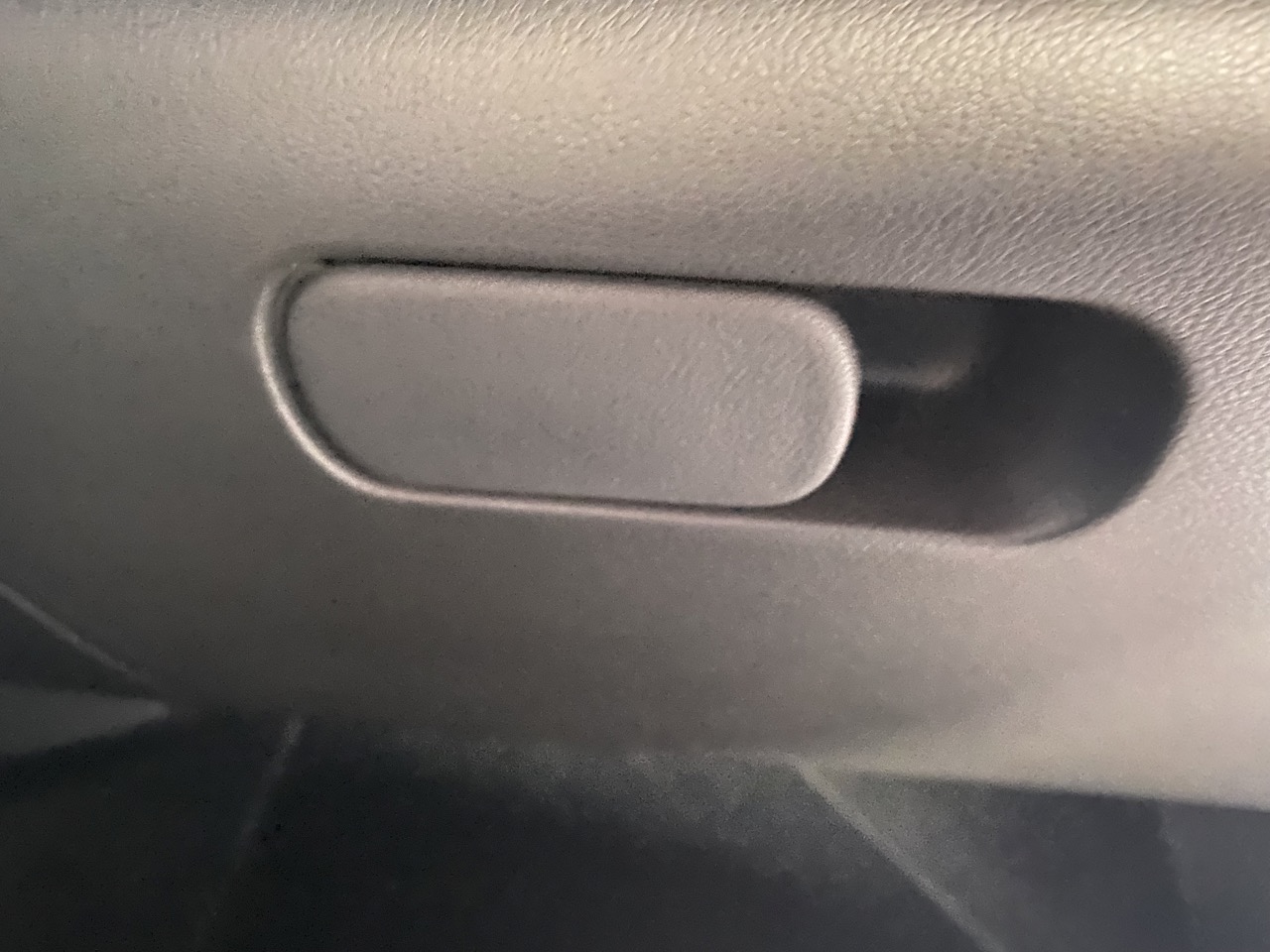 Also, as a bit of public shaming to the autojourno community, I’d like to point out that the car was open to the journalists for all of three minutes before someone dropped some trash in the center console storage bin: 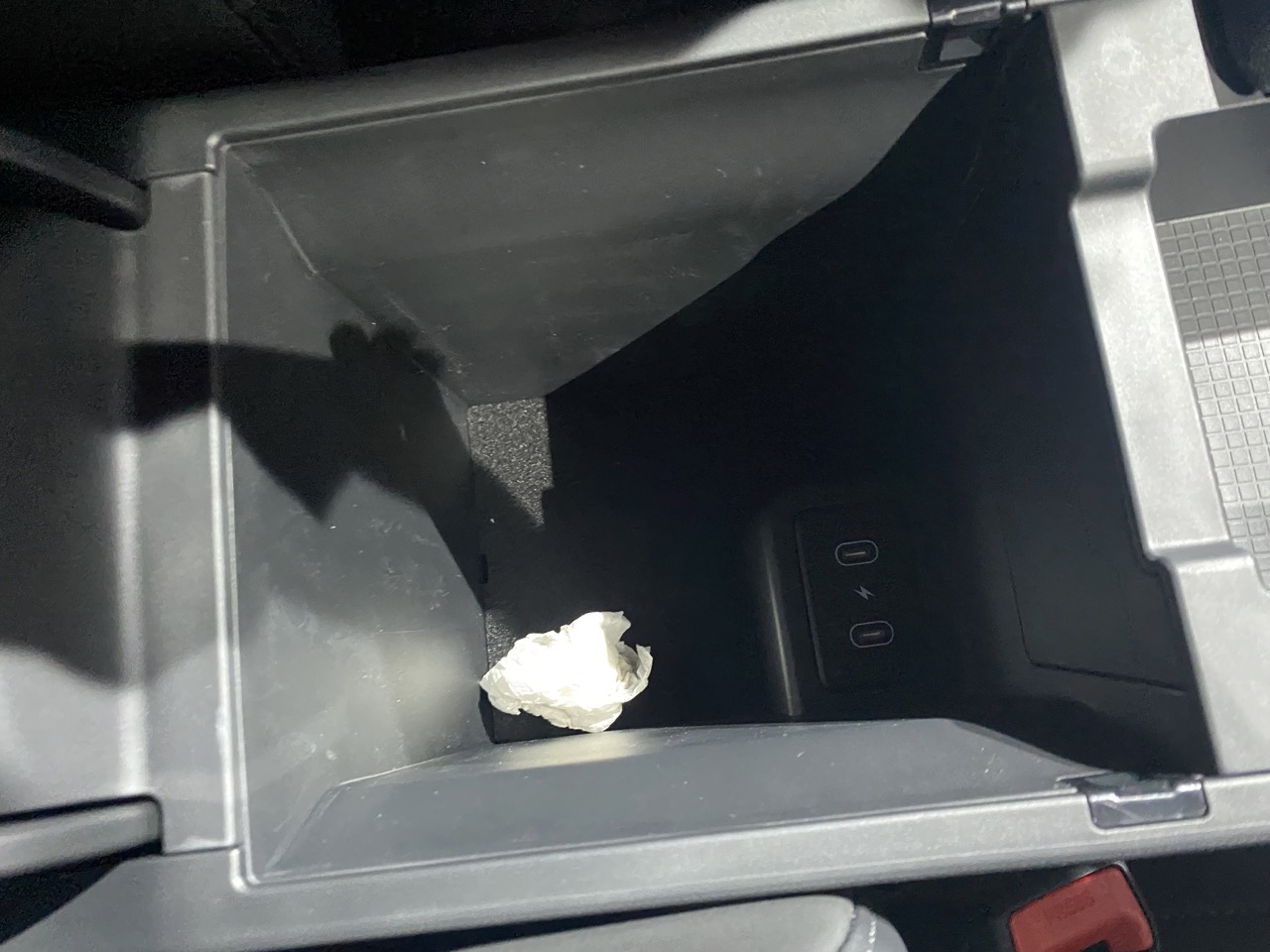 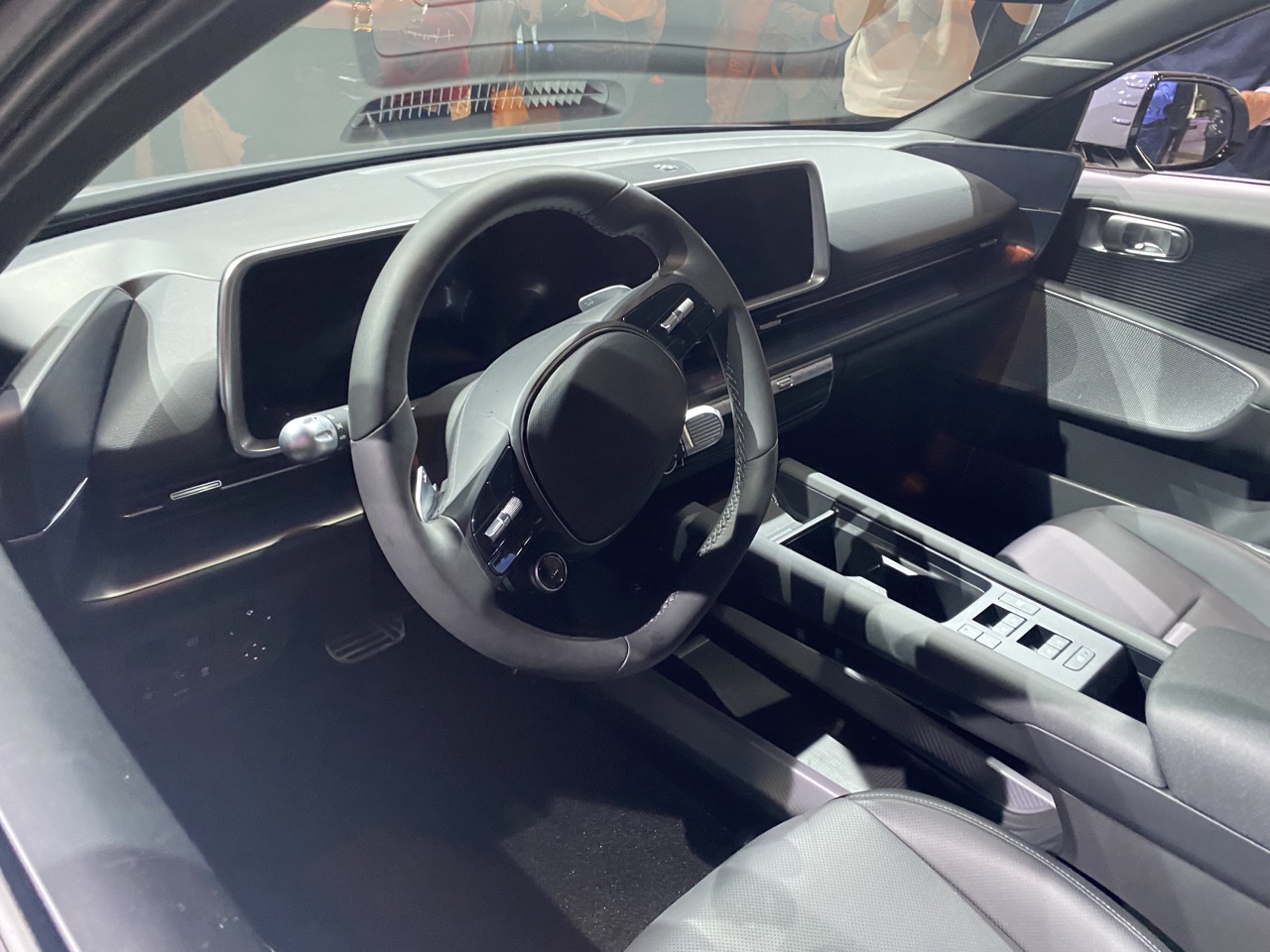 The interior looks clean and modern, there’s a floating “bridge” type center console which seems to be popular now, and the wireless charger is the pocket-type, which I think is a wise idea. Interior materials feel pretty good, though I do hope there’s interior color options beyond Ennui Gray. 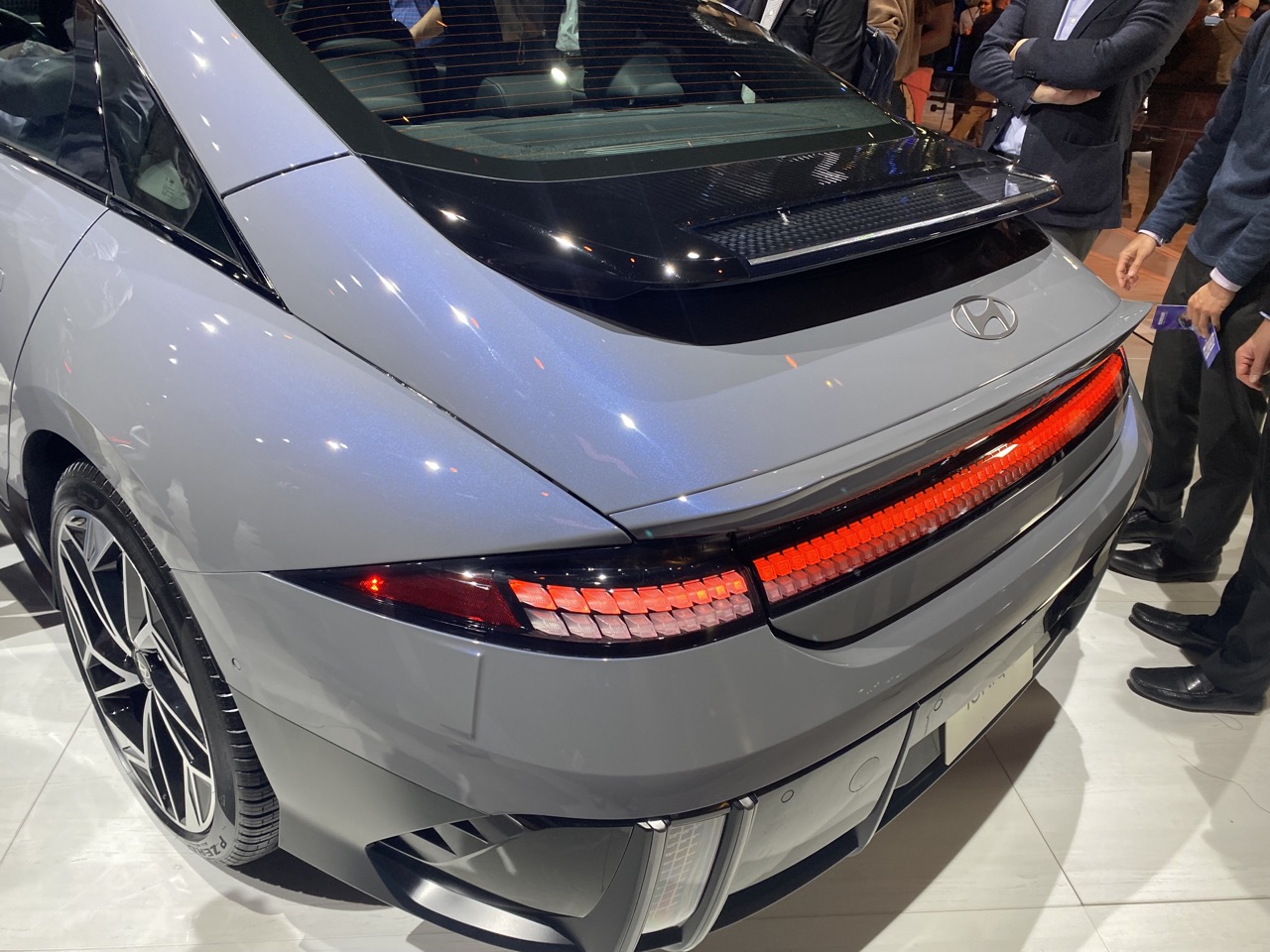 The rear spoiler incorporates the third brake lamp, and even when off, the dimensional pixel pattern is satisfying: 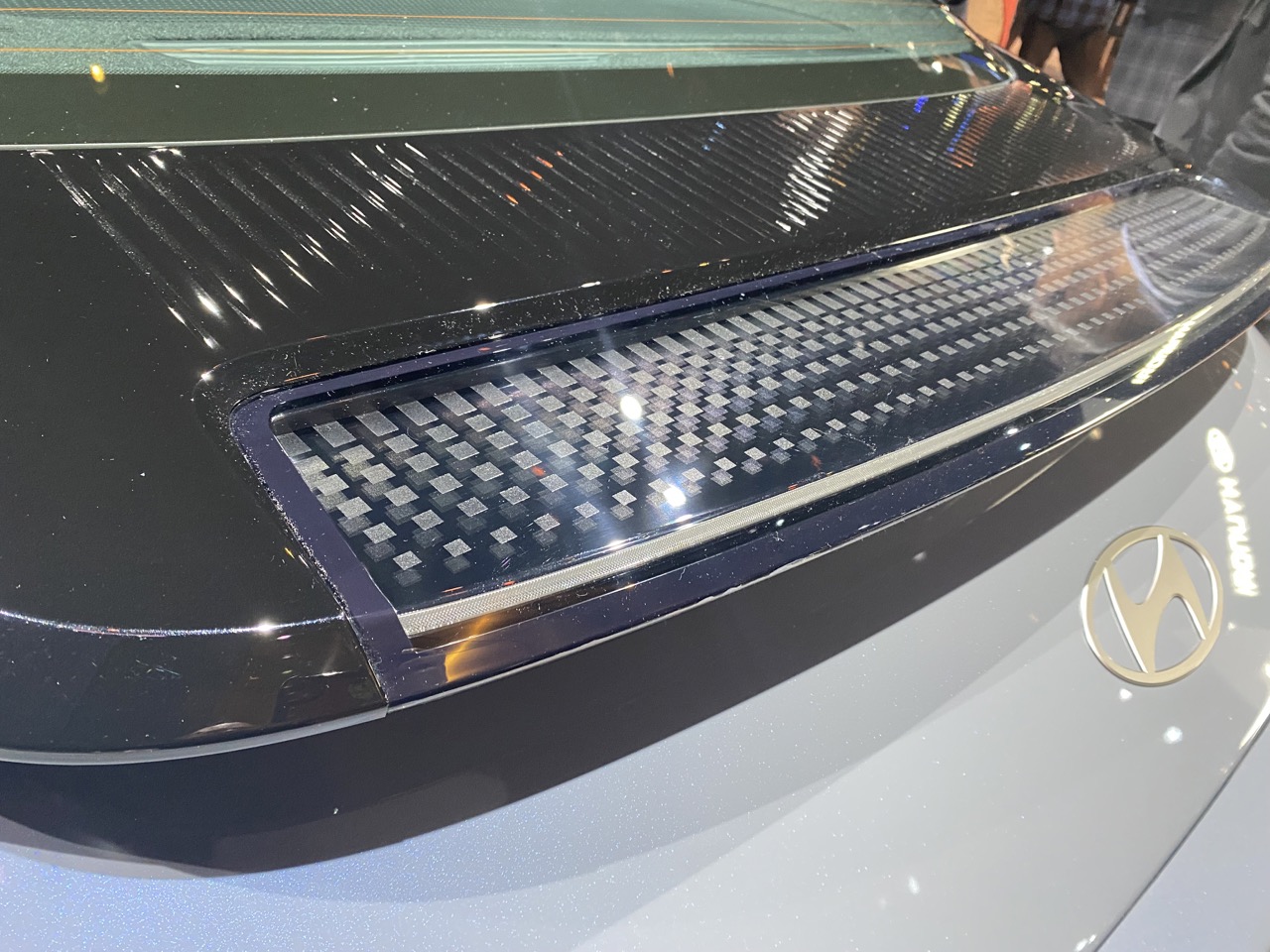 That photo makes the inset edge of the CHMSL look kinda rough, but I didn’t notice it in person. Hm. 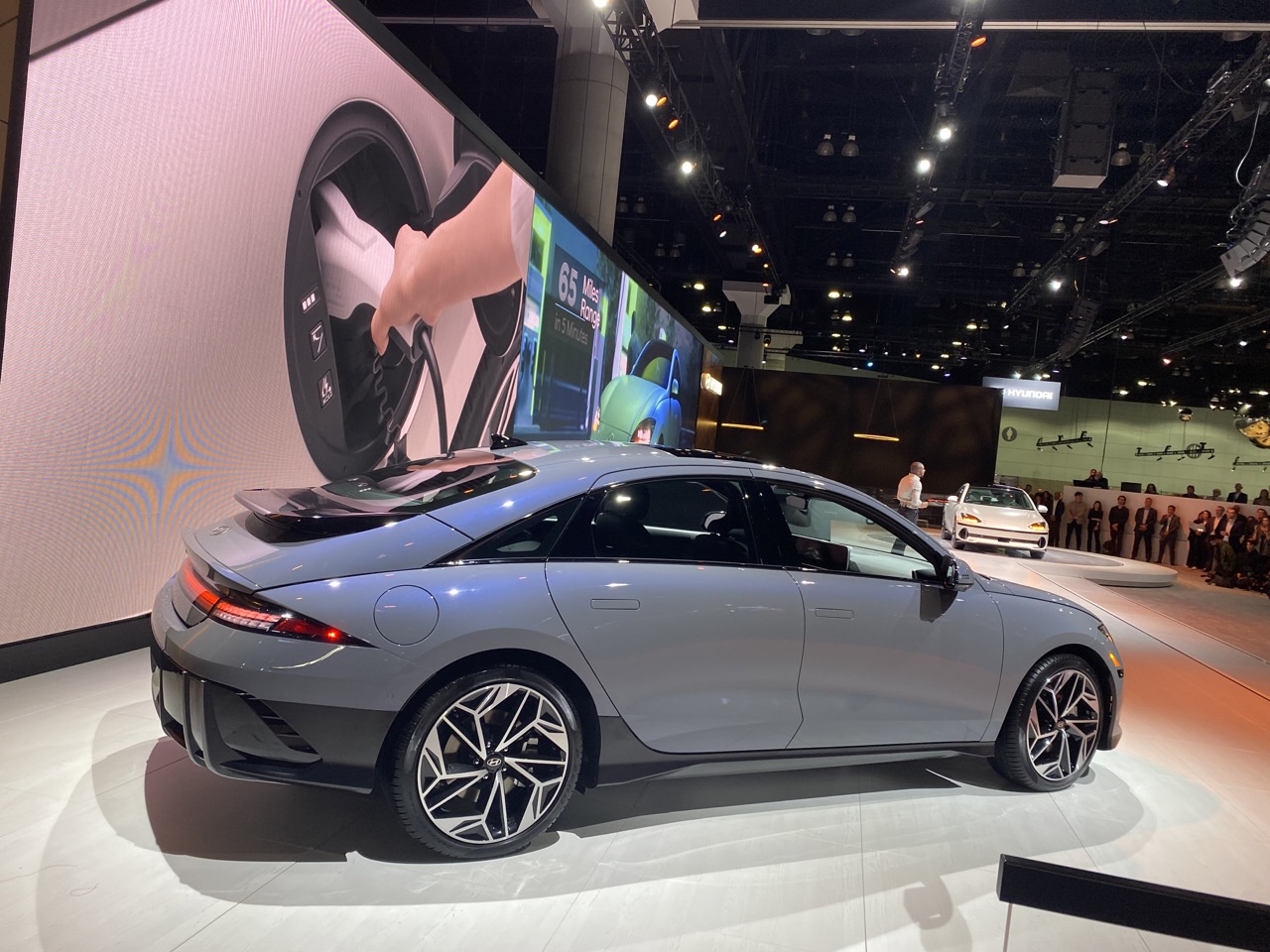 Overall, based on my physical interactions with the Ioniq 6, I think I like what I’m seeing and feeling and smelling and tasting. I’m very curious to drive it, of course, but once again Hyundai seems to be bringing it to the EV space.

I'm a co-founder of the Autopian, the site you're on RIGHT NOW! I'm here to talk to you about taillights until you cry and beg me to stop, which I absolutely will not. Sorry. Hug? Also, David's friend.
Read All My Posts »
PrevPreviousHere’s What A Professional Car Designer Thinks About The Stunning New 2023 Toyota Prius
NextSomeone Made The Transit Connect ST Tire-Shredding Van That Ford Didn’t SellNext