Six months ago I decided to start my motorcycle season by splurging on a part. After a year of struggling with nonstop dead batteries I threw a lithium battery into a basket case 1999 Triumph Tiger that I bought from Facebook. Six months later, this bike has become so reliable that I want to put lithium batteries in everything.

I should start by explaining the nightmare that this motorcycle has been until this year. Back in March 2021, I picked up a Triumph Tiger for the princely sum of $1,300. A Tiger wasn’t a dream bike or even a bucket list bike. Really, I bought it because of the engine nestled in the frame. Triumph’s three-cylinder engines create a symphony that is completely unlike the common twins and fours out there. The 885cc triple in my Tiger is connected to an aftermarket pipe, and it’s hard to describe the sound. It’s raspy with plenty of burbles and pops. Here, listen to another Tiger to hear what I’m talking about.

While I bought it for the sound, I quickly found myself in love. For years, friends had been telling me to buy an adventure motorcycle and now I see why. It’s comfortable, it has plenty of power, you sit nice and high, and it’s a motorcycle that isn’t afraid to get dirty. Sure, Gold Wings are more comfortable, dirt bikes off-road better, and sport bikes handle better. But an ADV like a Tiger is a good mix of traits to have.

What was not so good was the bike’s electrical system. When I bought it, the seller told me that it just needed a battery. That’s fine; it wouldn’t be the first time that I’ve had to buy a new battery for a new-to-me machine. Once I got home I went straight to Walmart and bought the first $50 battery that fit. This battery was too small for the Triumph, but I’ve owned 30-some motorcycles before this one, and every time I needed a new battery I was able to get away with the cheap, too small one. And by cheap, I mean the real cheap ones that require you to fill with electrolyte.

This time was different. I installed the battery to the Triumph and to my surprise it wouldn’t start. 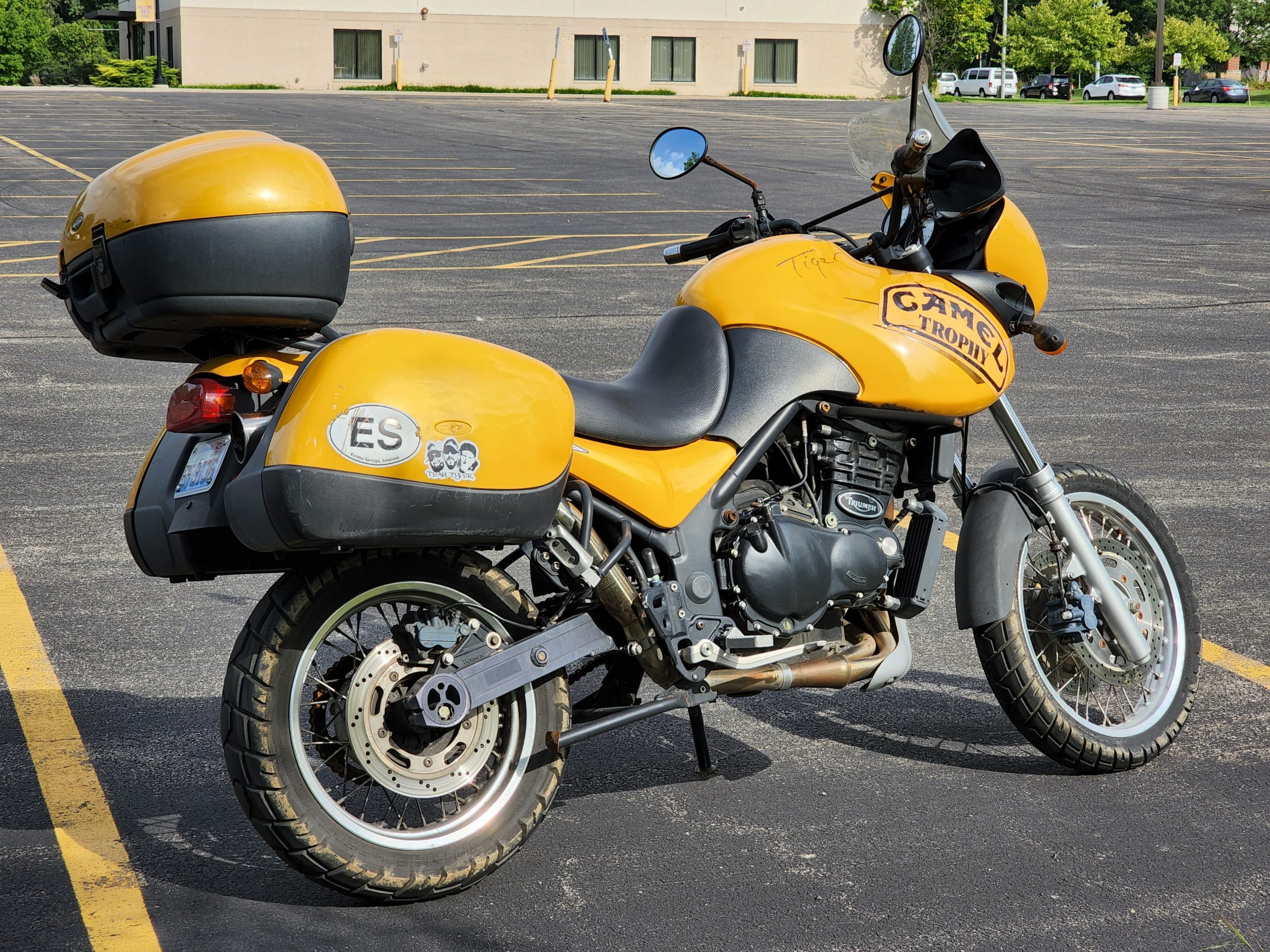 The lights came on, but the engine wouldn’t even turn over when I hit the start button. It may have started a few times on this battery, but most times I had to break out my jump pack, which always did the job without a problem.

This confused me, because in my experience until then, a weak or too-small battery would at least slowly turn the engine over. This thing couldn’t even do that. But after a jump, it always ran great. There were some clues to what was going on, like a flickering odometer, dim headlights, and a horn that always sounded too quiet. It seemed like the bike wasn’t getting enough juice.

I eventually bought the correct battery, and this seemed to solve my issues. It started without a jump pack tether and I concluded that being a cheapskate is what caused all of my annoyances. 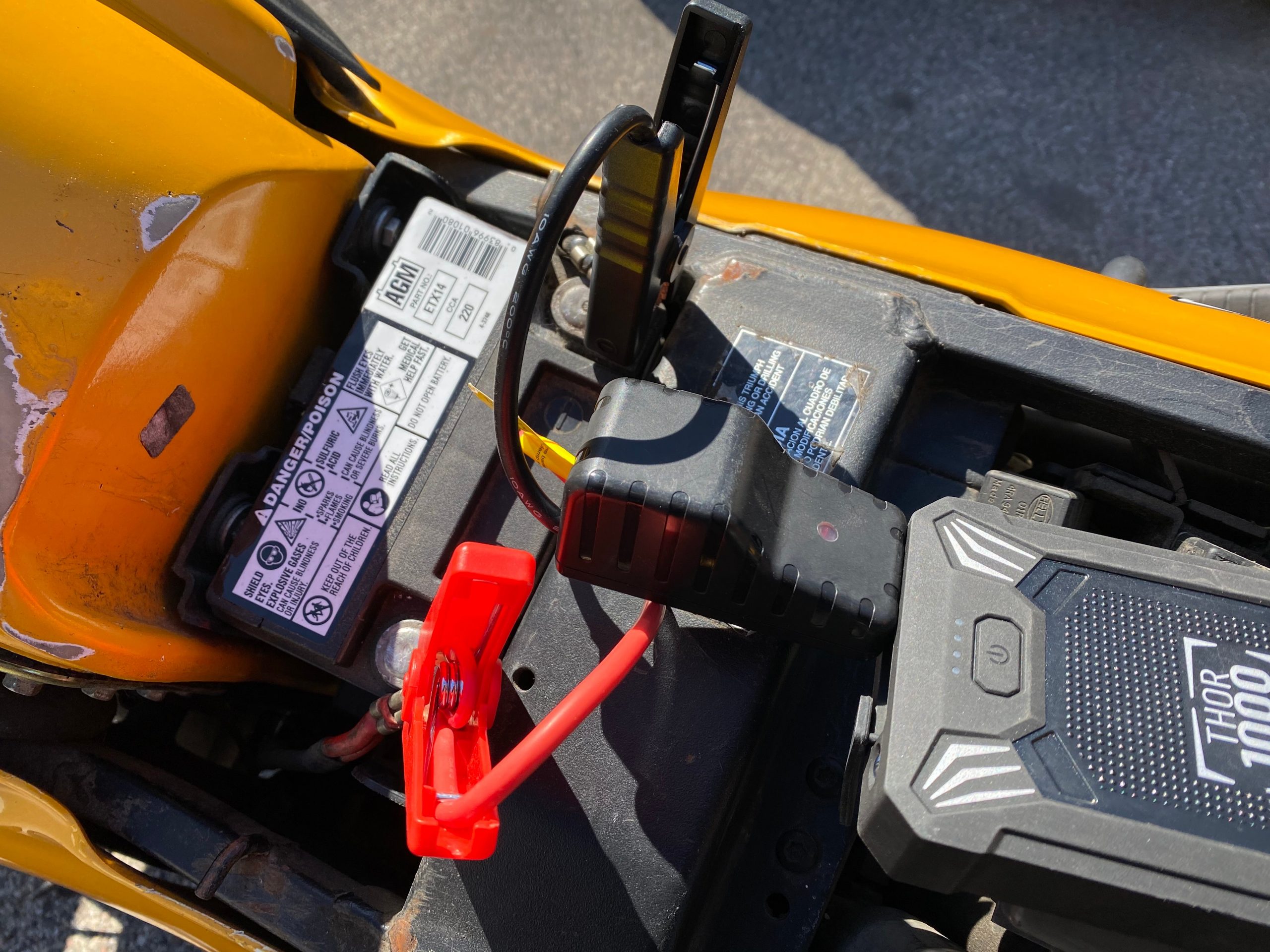 Then I let the bike sit for a couple of weeks, and once again, it stopped starting. Just like with the last battery, the starter wouldn’t even try to engage. Upon hitting the start button I heard a slight click, then nothing.

Even more annoyed than before, I cracked open the Haynes manual that came with the bike and got to work. Perhaps I should have known what I was getting into. After all, the Haynes manual had a pencil taped to it and sheets and sheets of electrical drawings from the original owner were inside. 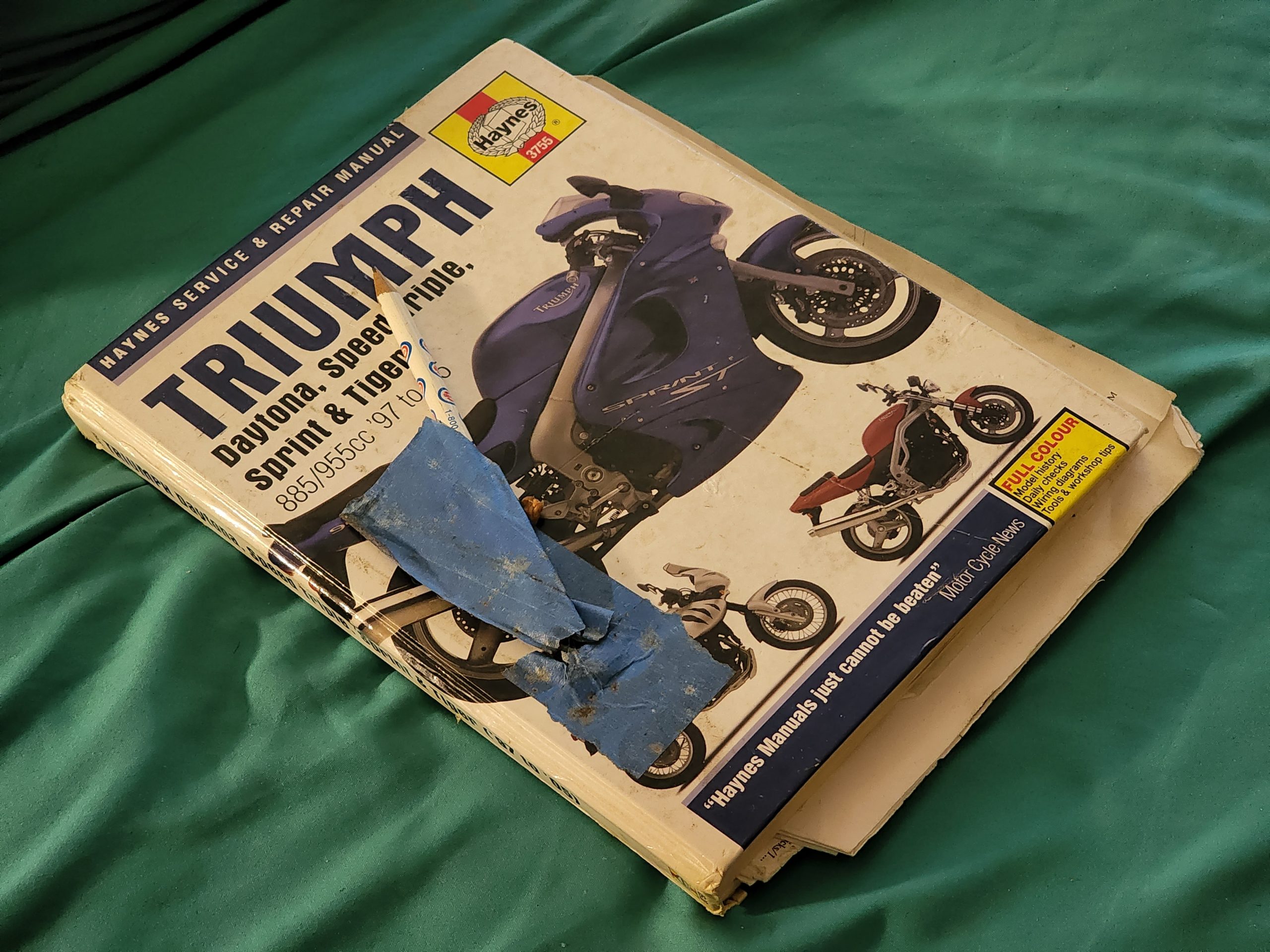 His handwriting was so bad that I couldn’t make out what he was trying to do, but he was clearly trying to do some rewiring. Whether the rewiring was to solve a problem or for a modification I still haven’t found out. My best guess is that the original owner modified the headlights so that the high beams are the low beams.

Next, I tested the battery, which came back at 12.3 volts. It should have more juice than that, but 12.3 is still enough to at least turn the engine over. Yet, I got nothing. From there, I tested the motorcycle’s adorable alternator. 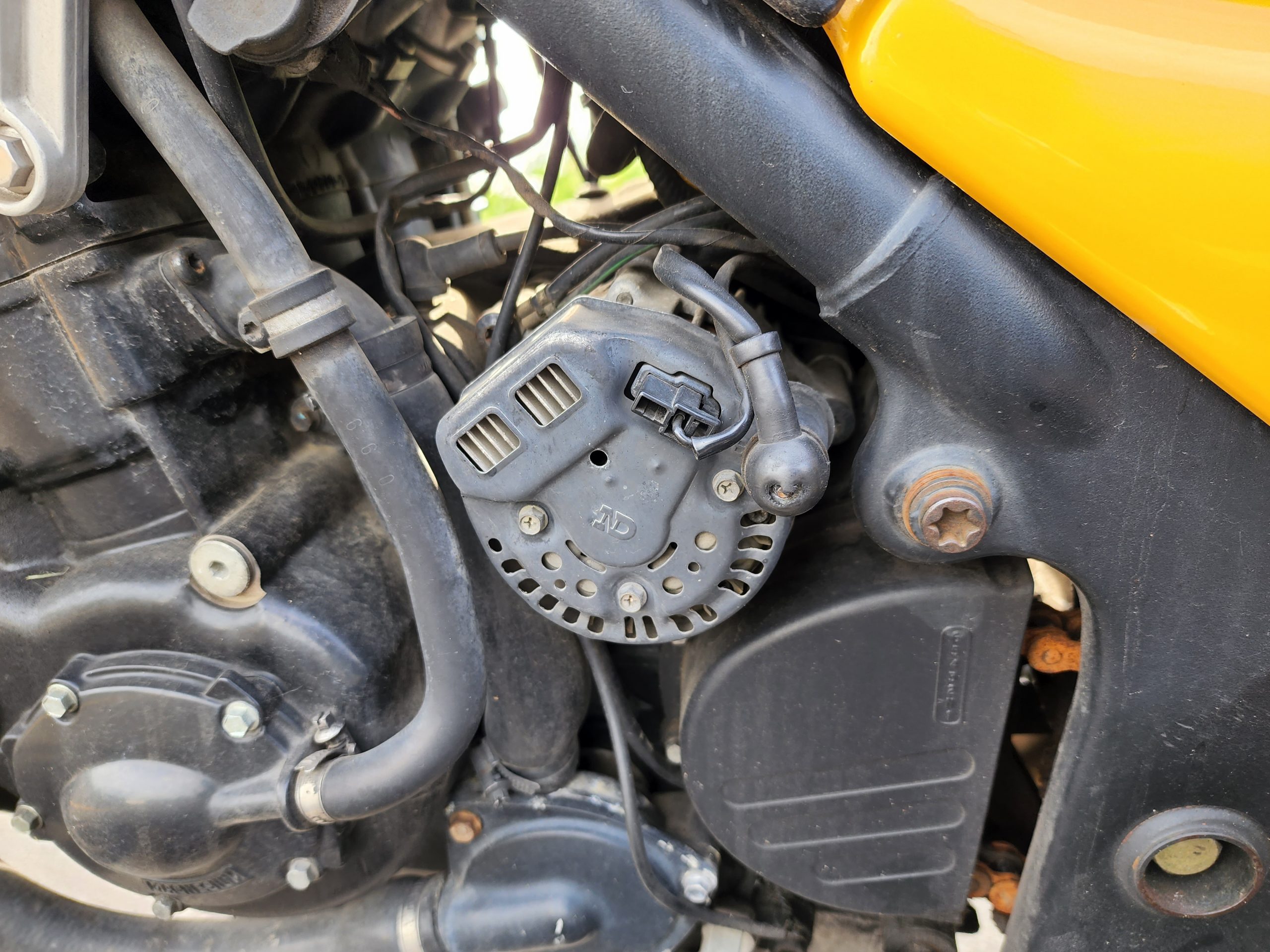 Really, this thing has a small alternator! It puts out about 13.3 volts at idle and goes up to 14. More on that in a bit.

Stumped, I reached out to a local mechanic. He said that the issue likely had to do with the ECU but asked to see the motorcycle instead of explaining further. I started scouring Triumph forums and found a little quirk about these bikes. As many owners have discovered, while another bike may turn over slower when the battery is not at a full charge, a fuel-injected Triumph may not turn over at all. And that flickering odometer and dim lights? Those are apparently signs of not enough voltage. Another sign of low voltage is a check engine light after the engine fails to turn over. 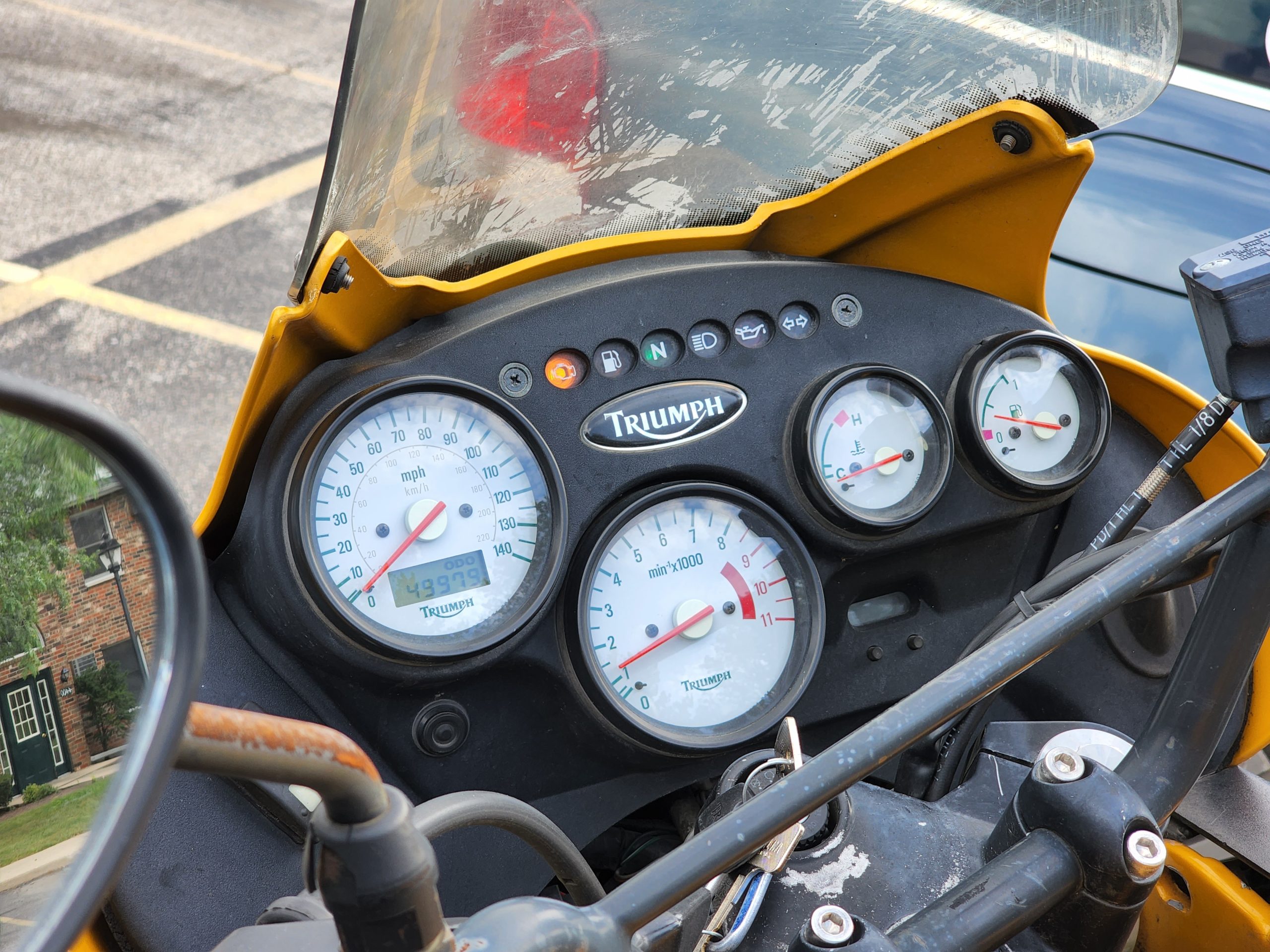 It gets worse from there. A number of owners have discovered voltage losses from the battery to the starting system. And as a result, there are online threads out there of guys shortening the cables and wiring throughout their Triumphs in an effort to get just a little more voltage. You could even buy kits to improve the wiring harness.

And on newer Triumphs, there’s actually a voltage cutoff. That voltage isn’t published, and some believe it to be arbitrary. But one thing’s for sure: if the battery doesn’t exceed the cutoff, it won’t even try to start. Some dealerships allegedly recommended charging batteries nightly or a “city tune” that lowers the starting voltage threshold.

So, what I’ve gathered is that the electrical system is a mess in these, and there’s no surprise that the alternator gets only 13.3 volts to the battery. The solution appears to be to go through the bike, refresh the wiring, and maybe do the mods that others have done. And I should do that, but going through the wiring of a 23-year-old British bike really isn’t anywhere near the top of my to-do list.

Instead, I’ve opted to bring in some extra firepower. Back in March, I bought a Noco NLP14 lithium battery for about $120. 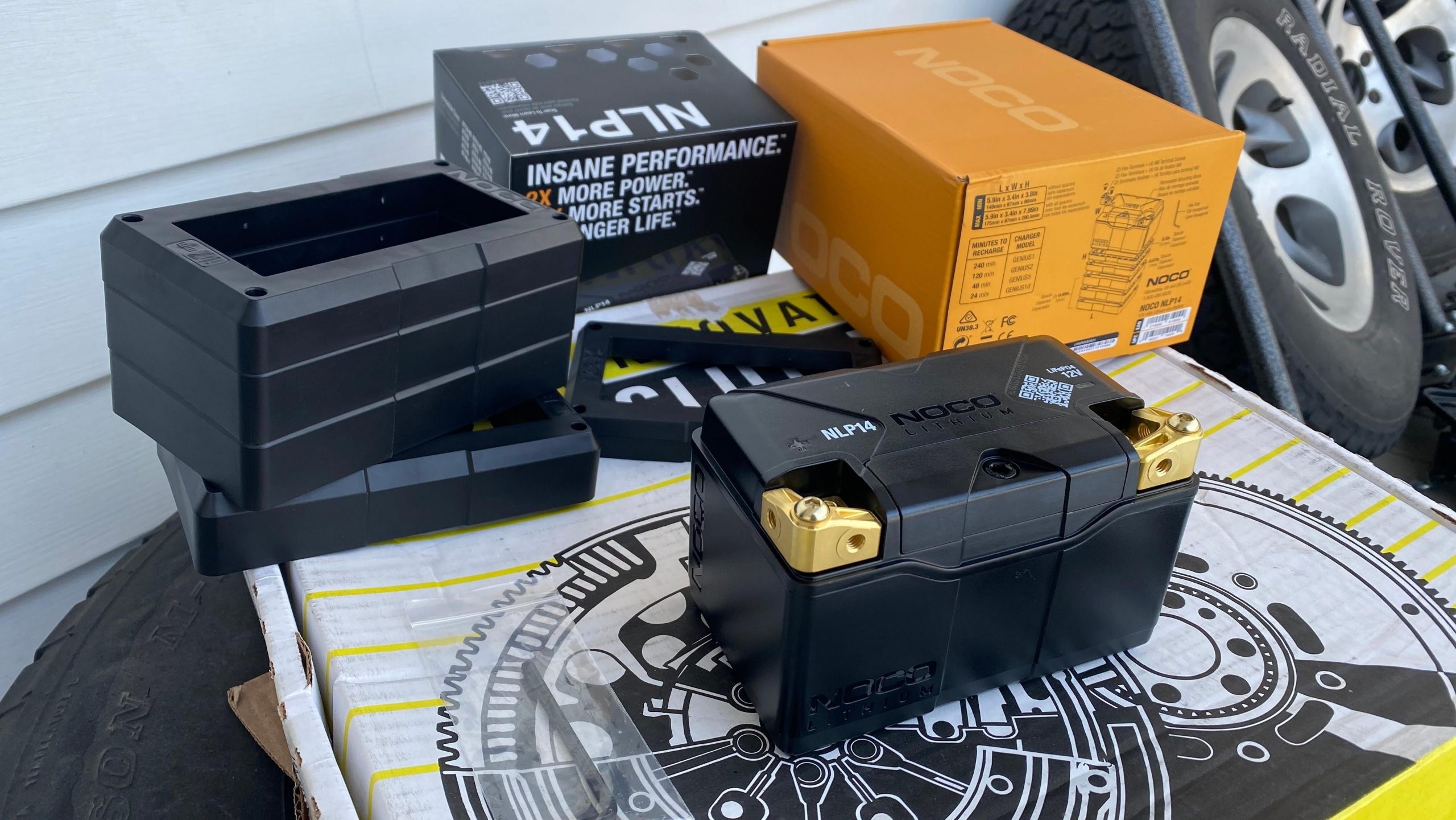 This is the equivalent of a YTX14-BS lead acid battery but at a fraction of the weight. And lithium battery chemistry is a lot different than lead acid. While a lead acid battery drops voltage with its state of charge, lithium batteries hold strong until their charge gets low. This sounds perfect for a bike with a temper about its voltage.

Here’s a quick comparison. A Yuasa YTX14-BS is the recommended battery for my bike. This is a 12Ah battery that weighs in at 10 pounds and features 200 cold-cranking amps of starting power. This is the battery that worked fine, unless I didn’t ride for a couple of weeks or so.

The Noco NLP14 lithium has a 4Ah capacity, but Noco claims you’ll get the equivalent of a 13Ah lead acid battery out of it. It comes in at 2.5 pounds, but annoyingly, Noco doesn’t list CCA. Instead, the company claims a starting current of 500 Amps peak.

It’s been a night and day difference in the Triumph. Since then, my lights have stayed bright, my horn is loud, and most importantly, it always starts. My Triumph starts when the temperature is in the teens. My Triumph starts when the temperature is above 100. Heck, the Triumph will even start after it has sat for well over a month. And the check engine light, which was on for low voltage, turned off. None of the other batteries could achieve this. 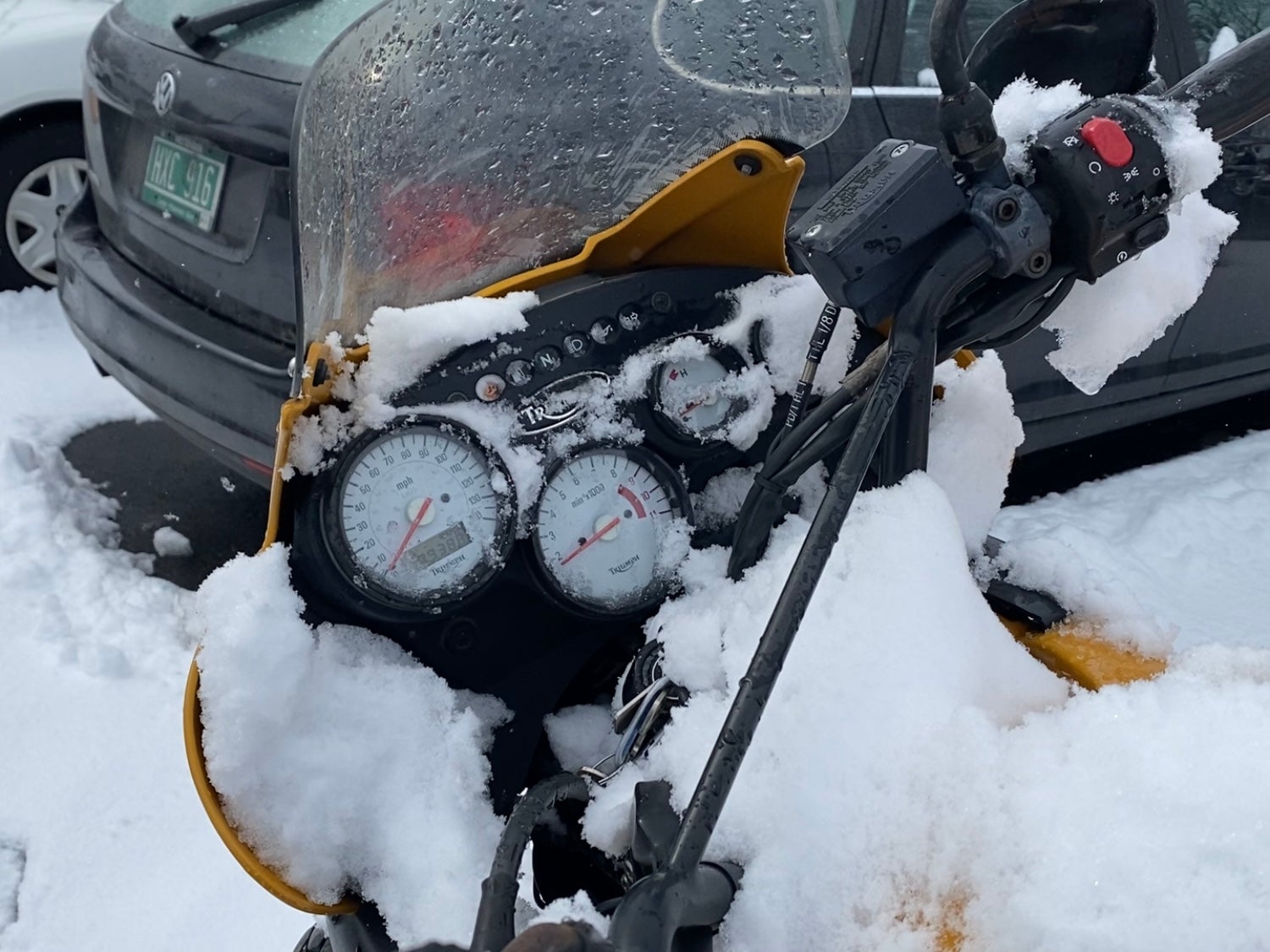 And because we’re talking about lithium power, when I started the bike after over a month of dormancy, it turned over like I rode it yesterday. I’m now no longer afraid to take my Tiger on long journeys and over these six months I haven’t needed to use the jump pack a single time.

Now that it seems like my woes are solved, I can finally get to the other things that I need to fix on this bike. It desperately needs a mudguard and the turn signals have seen far better days. 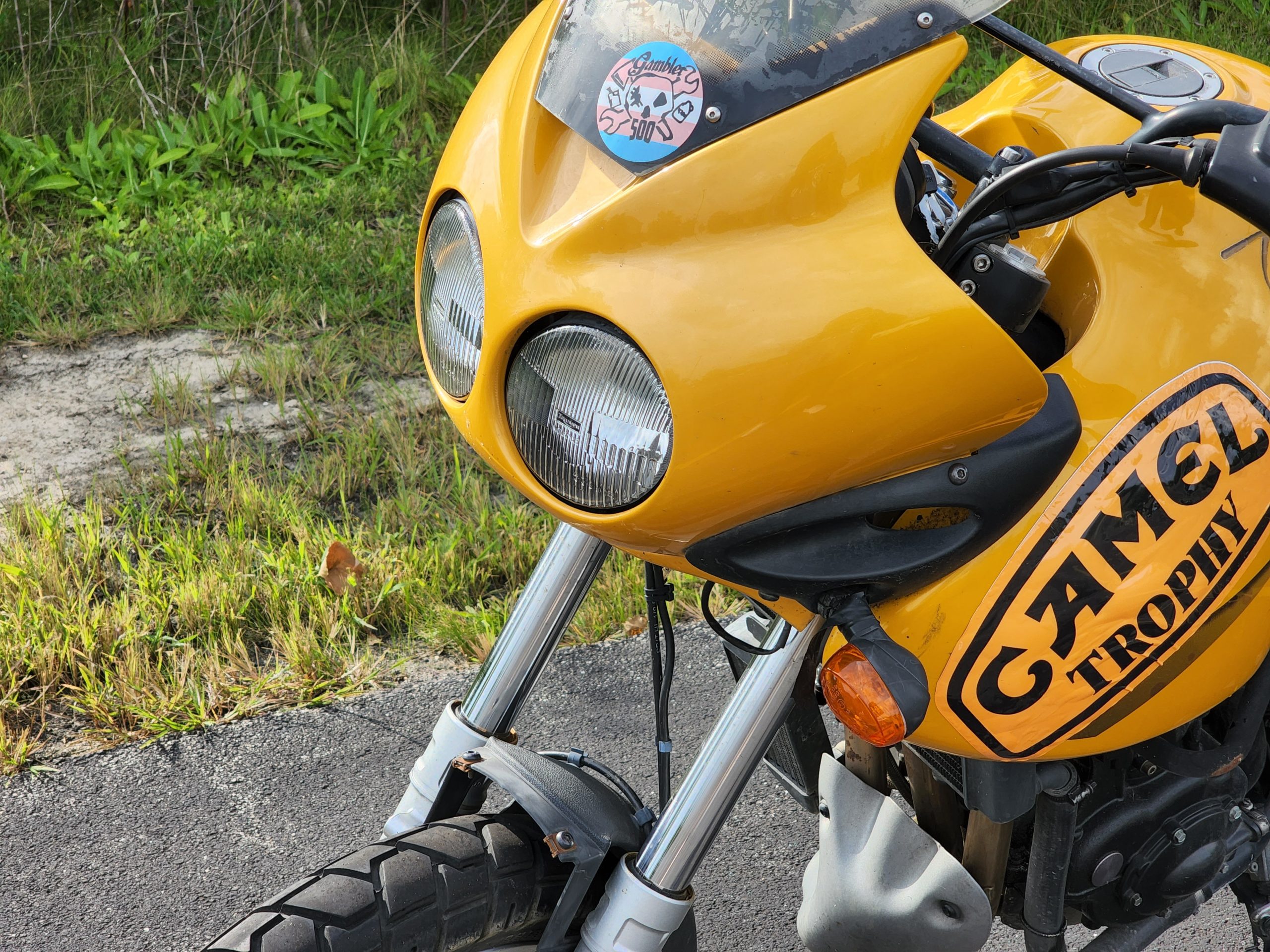 I’d also like to convert the bulbs behind the instrument panel to LED. Maybe, I can even find some good LEDs for the headlights, too.

The little Triumph could also use a new seat, as the original is beginning to crack faster than I can seal the cracks up. 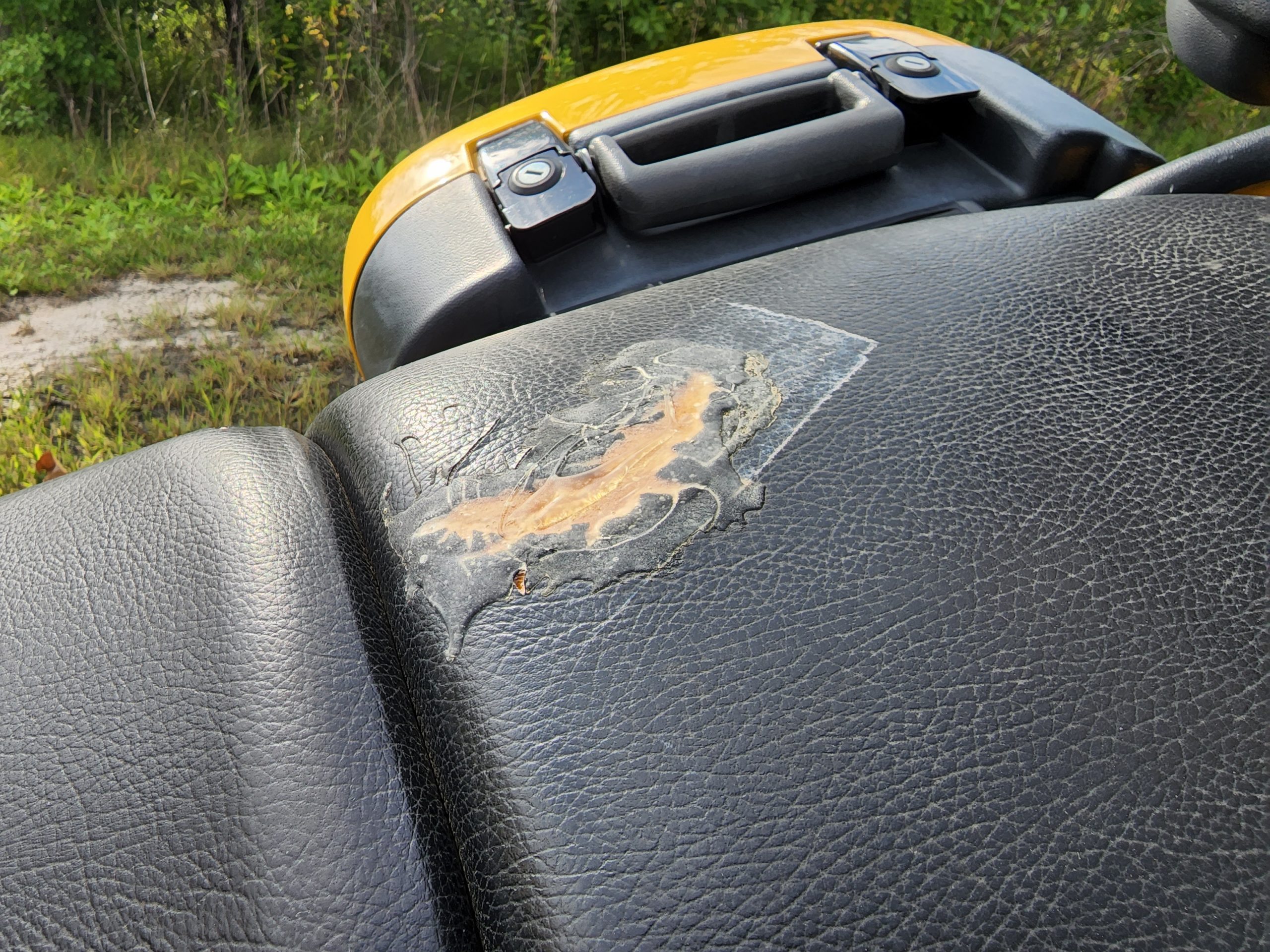 When I originally wrote about this battery purchase, some had concerns about having a lithium battery under your butt, being charged by a system meant to fill up a lead acid battery. After all, lithium batteries of the past sometimes had a knack for going up in flames.

Noco thought of this, and the battery has its own electronic management system. It prevents the battery from being charged too much, discharged too much, short-circuited, too frozen, too heated and more. This thus far has meant no fiery death and drop-in compatibility with my old bike. 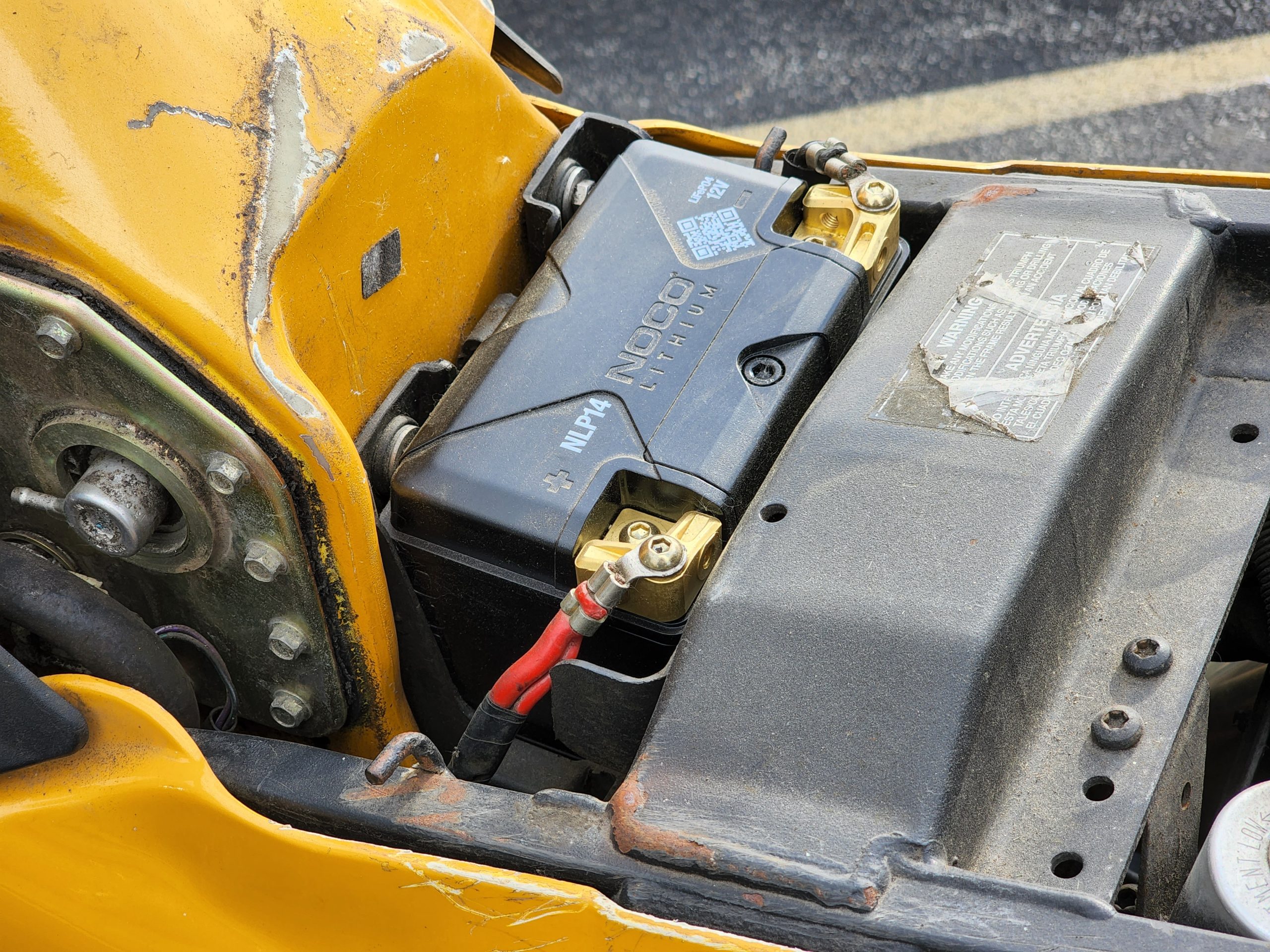 I’m so impressed with this battery that I’m certain that it’s the best battery that I’ve ever owned. I even love the fit and finish. There’s good attention to detail, which is a bit wild for something that you’re rarely ever going to look at. Noco also provides you with neat spacers so you can fit the battery perfectly into whatever space you need it to fit. 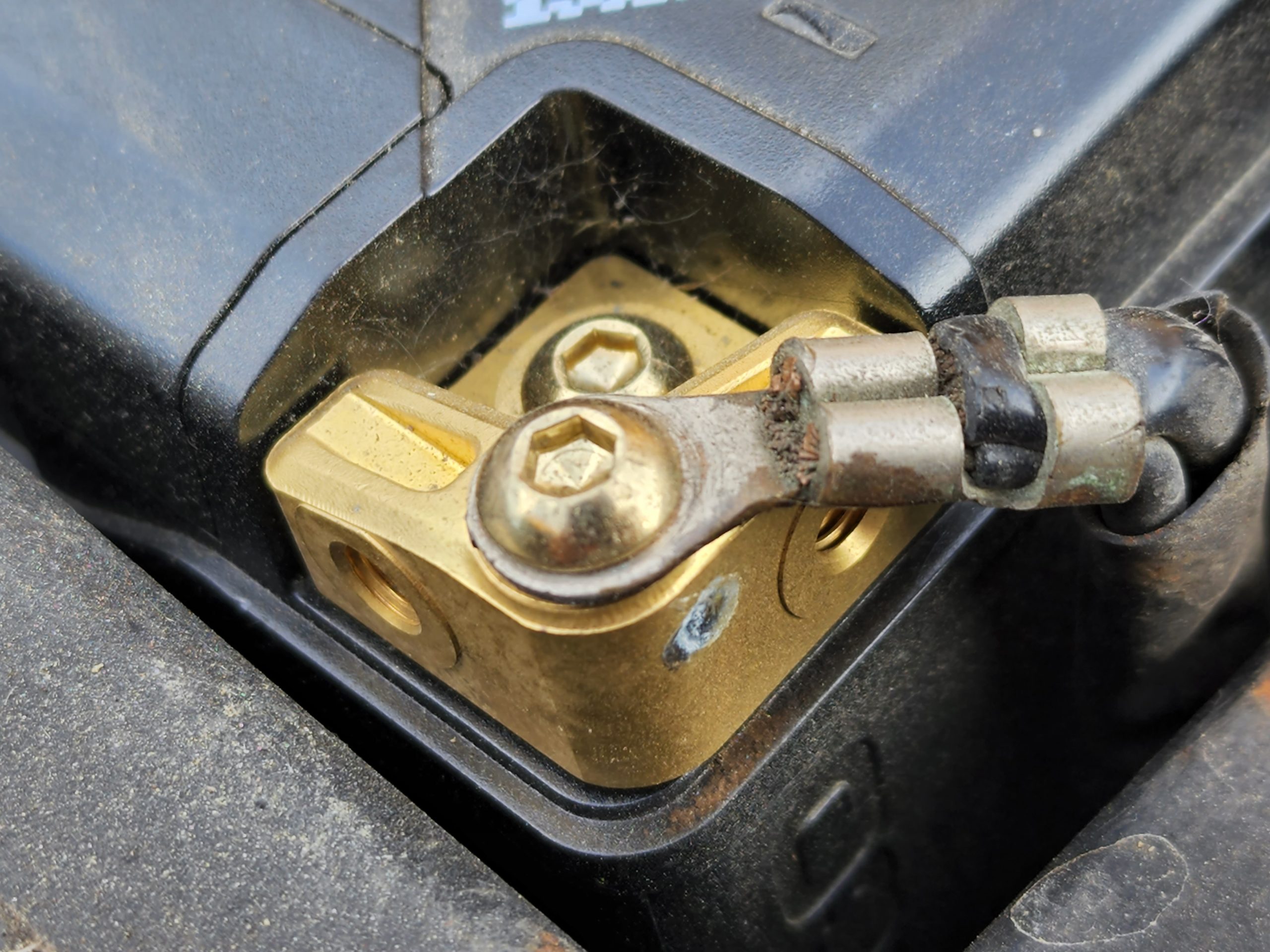 Now, there is a downside, and it’s that when it comes to charging at home, Noco says that these can be charged only by chargers that have a lithium battery charging function. Thankfully, a charger that can handle lithium batteries is cheap, so it’s a small downside.

This has given me what’s probably a bad idea. Can I power other vehicles with lithium batteries? Sure, I’m probably going to have to wait years before I can buy an affordable lithium battery for my bus. But maybe I could fit these into my kei cars? I mean, my Honda Beat and my Suzuki Every already use what look like lawn tractor batteries. Perhaps before the summer is out you’ll see me test another one of these out on my fleet. 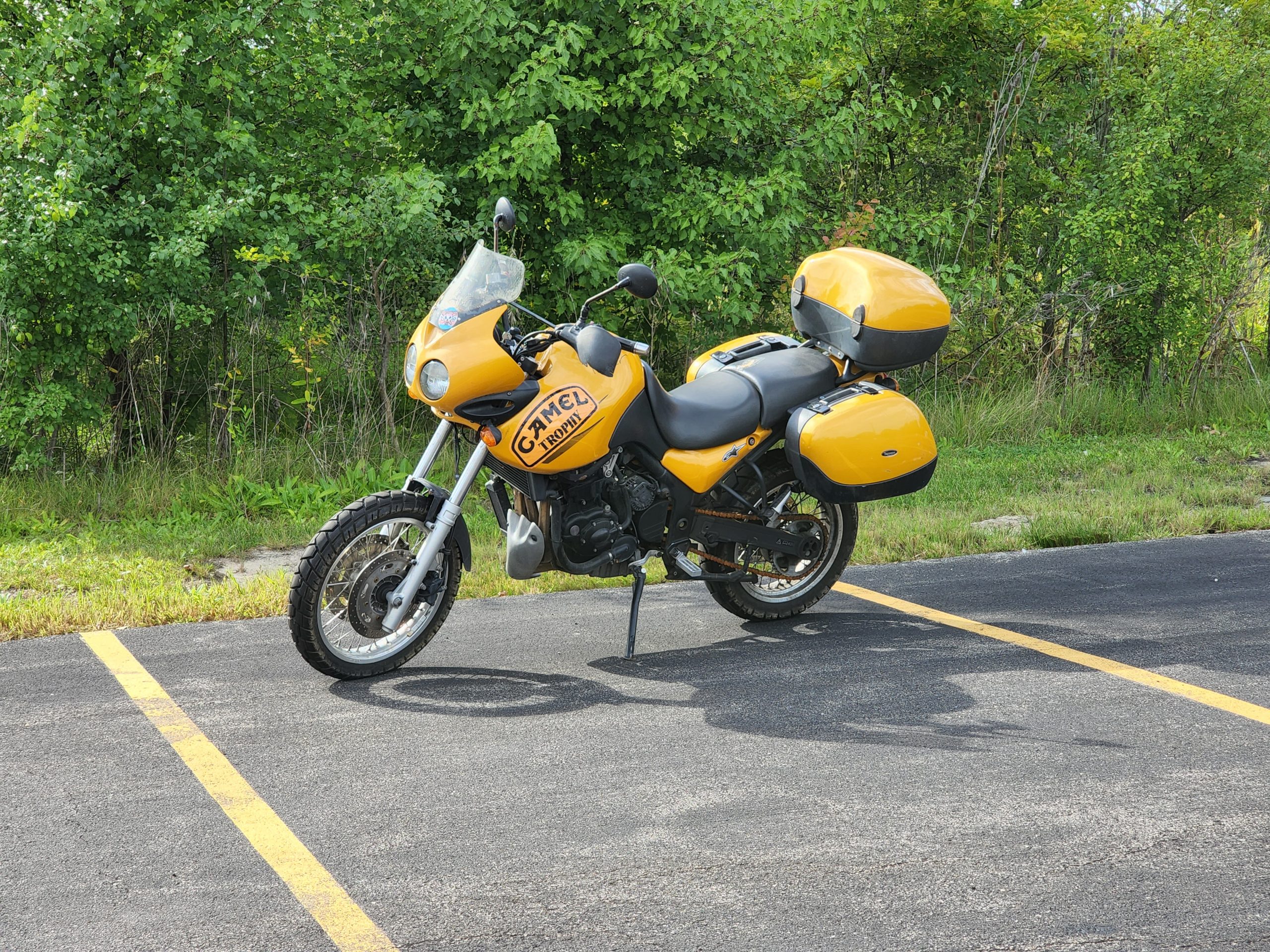 Either way, I’m really happy with what the Noco has done for this Triumph. Maybe my electrical issues will return again, but for now, I’m finally enjoying this bike after over a year of owning it.

Mercedes is a lifelong fan of all things powered by an engine. When she isn't driving one of her five Smart Fortwos or her 14 other vehicles she could be found in the cockpit of a Cessna 172 or perhaps swimming in any body of water that she could find. She also has a deep love for buses of all kinds. Please send her buses. mercedes@theautopian.com Instagram: @mistymotors Twitter: @Miss_Mercedes30 Facebook.com/neonspinnazz
Read All My Posts »
PrevPreviousWhy Do I Want To Buy Sir Elton John’s Bentley Continental R?
NextFleet Update: The F-150 Drives Again, The Yugo Shits The Bed As Is The Way Of ThingsNext