A Trained Designer Imagines What The International Scout Could Have Become

You people like things that aren’t real, right? Of course you do! Especially imaginary cars, right? We got some Cybertruck fans out there, don’t we? I kid, I kid! You guys are all right. As you know we at The Autopian like to provide you with all the fictional automotive content you can stand, which, let’s be honest, varies a lot from reader to reader. This time our frustrated ’80s-era-trained designer, known only as The Bishop, is back, and he’s opened his Third Eye to a universe where the proto-SUV International Scout made it into the 1980s with a third version. Take whatever pills are handy and join us on this voyage of the mind!

First, in case you’ve somehow recently walked into a whirling ceiling fan and forgotten what an International Harvester (IH) Scout is, let’s do a quick refresher. International Harvester, as the name suggests, started as a farm equipment company, but moved into building trucks pretty early in the 1900s. They expanded to passenger cars with the Travelall, and then in the late 1950s decided they needed a competitor to the Jeep, which was riding its WWII fame to become a staple of off-road civilian life.

Originally conceived as a plastic-bodied car, the scout was designed by IH Chief Designer Ted Ornas, who came up with the final design in 1958 on his kitchen table, on a scrap of mat board. 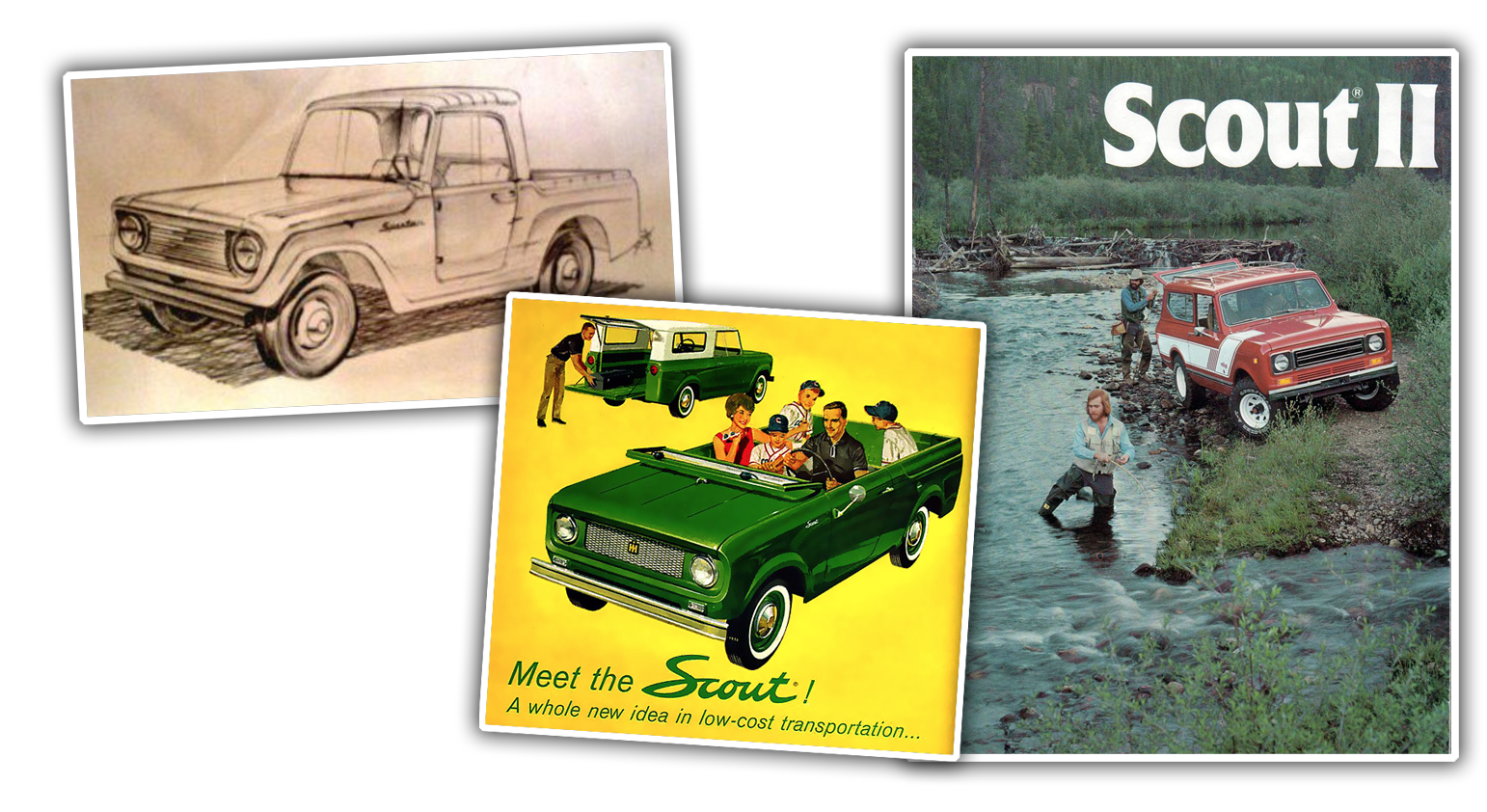 That sketch was approved, the project switched from plastic to steel, and by 1961 there were Scouts being sold. The Scout was a success, with a second-gen version, the Scout II, arriving in 1971 and lasting until the nameplate’s demise in 1980. Over half a million Scouts were sold over the years, making it likely IH’s best-known car.

In 1979, International built a concept car called the Supplemental Scout Vehicle (SSV) that pointed to the future direction of the Scout, except it, you know, didn’t have a future. 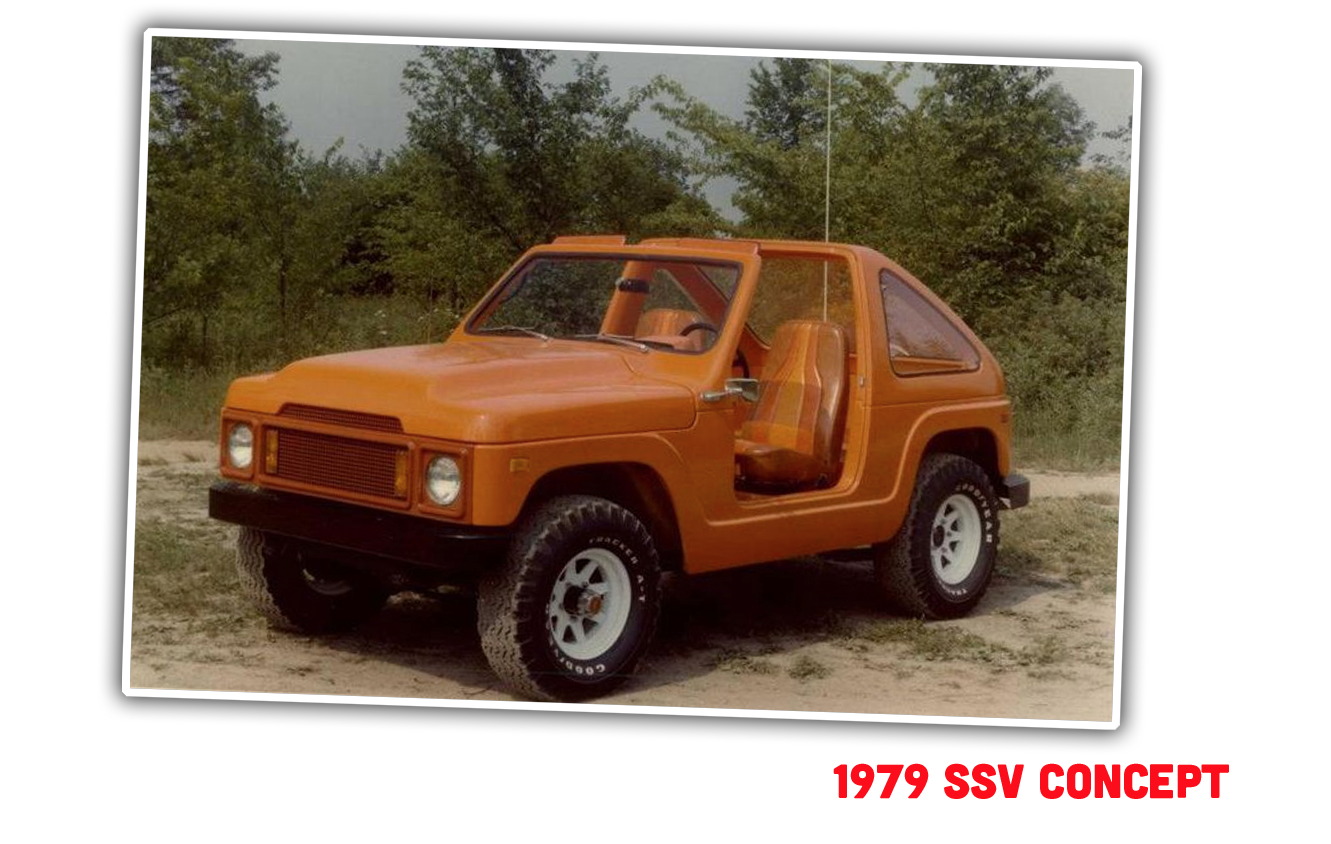 You can get a sense of where IH was thinking about going with the Scout which, interestingly, included a return to a non-steel body. Unfortunately, a number of factors including the increased demand for more fuel-efficient cars and IH needing to focus more on the product lines that actually made money, their trucks, caused the Scout program to be ended. 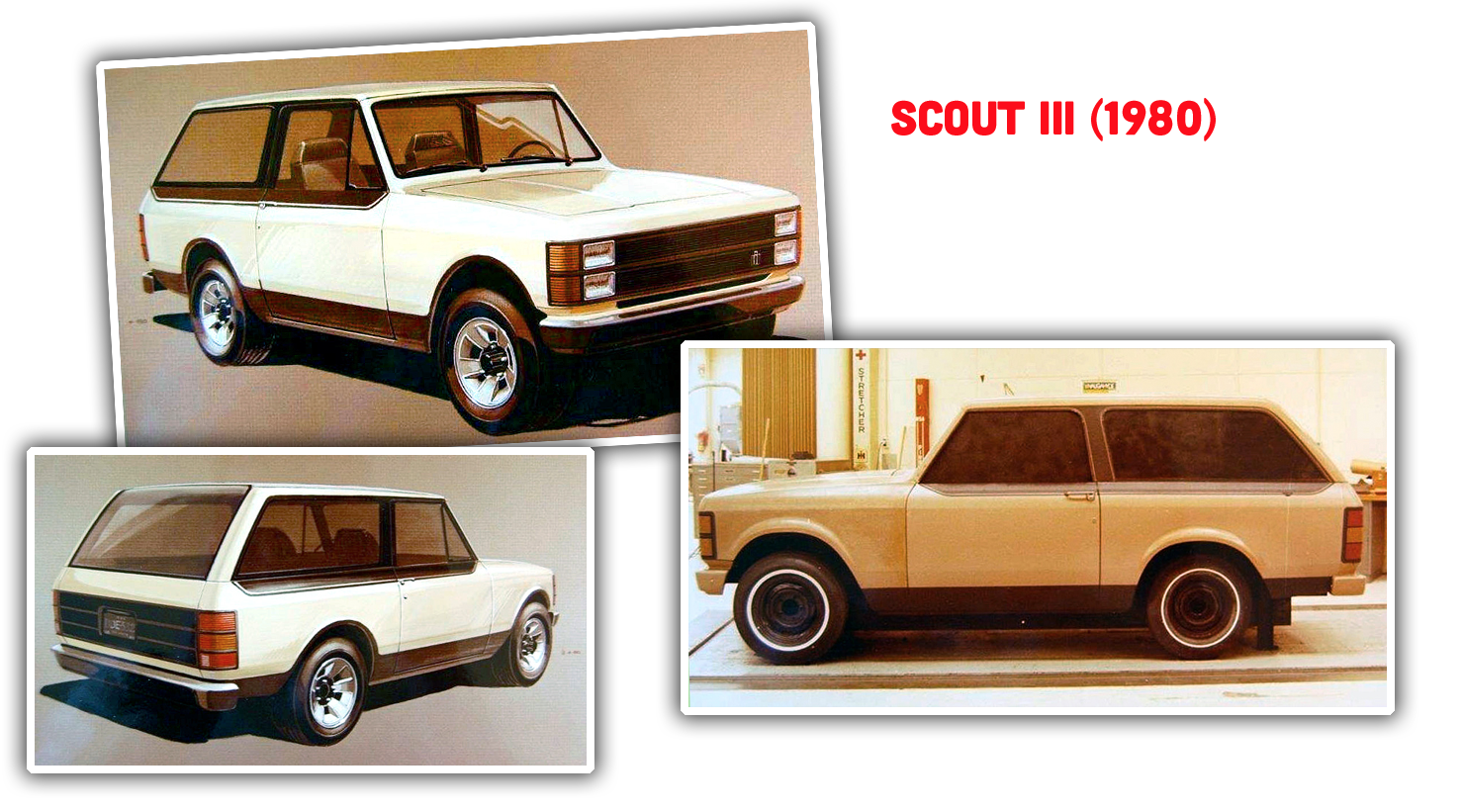 Before it ended, there were styling studies for an updated Scout III, but, of course these never happened.

And that’s where The Bishop comes in.

Our designer of Cars That Never Happened picks up the Scout story in 1987, when an all-new Scout was designed, with an emphasis on its off-road roots, and a design that seems to have been inspired by the 1979 SSV concept: 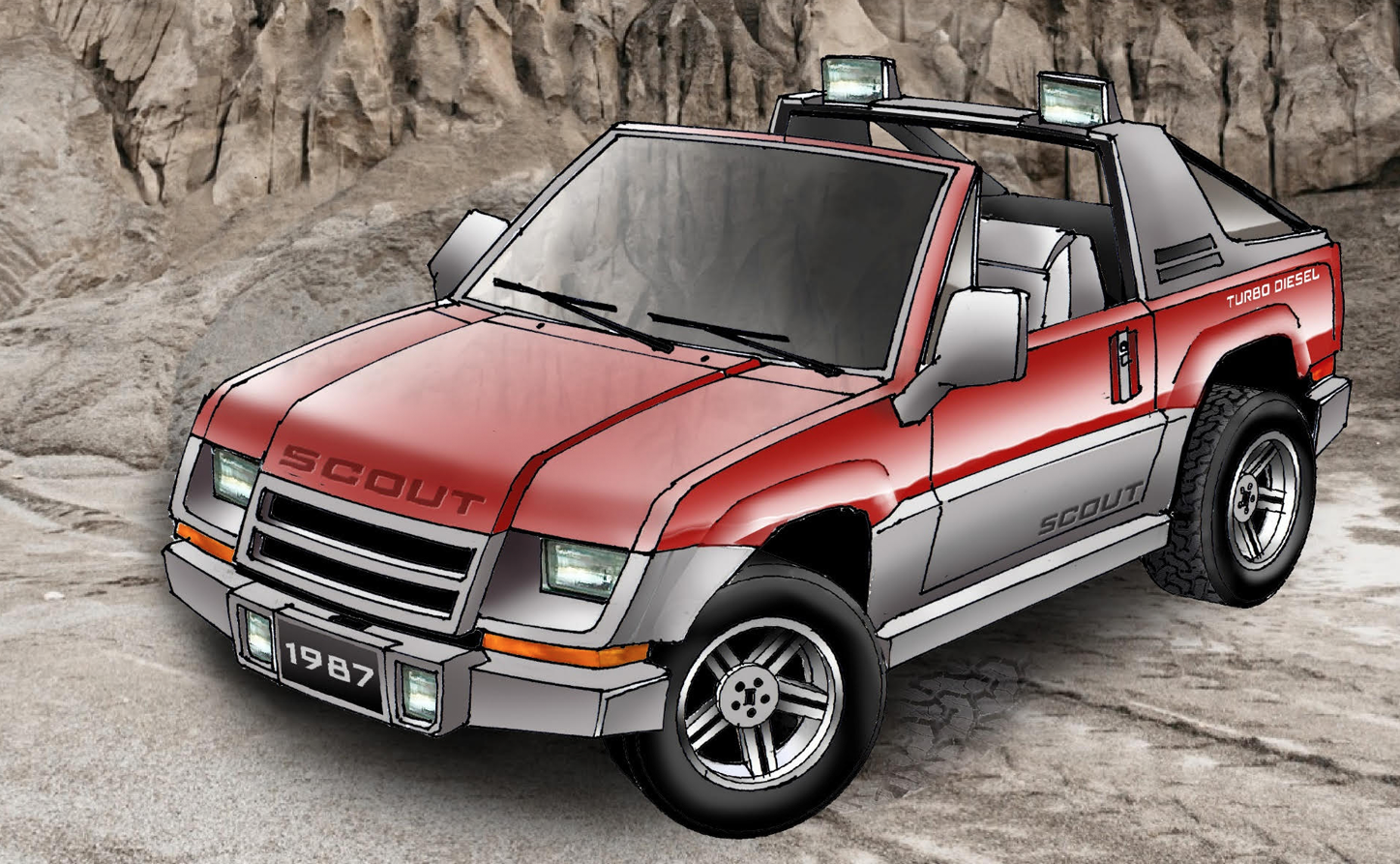 The rugged, unpainted lower-body cladding feels like the right choice for a car that’s going to get lots of off-road abuse, and I think the overall look certainly works in a late-’80s tough context. What I really like best about The Bishop’s ’87 Scout IV (?) design are all the clever details, though: 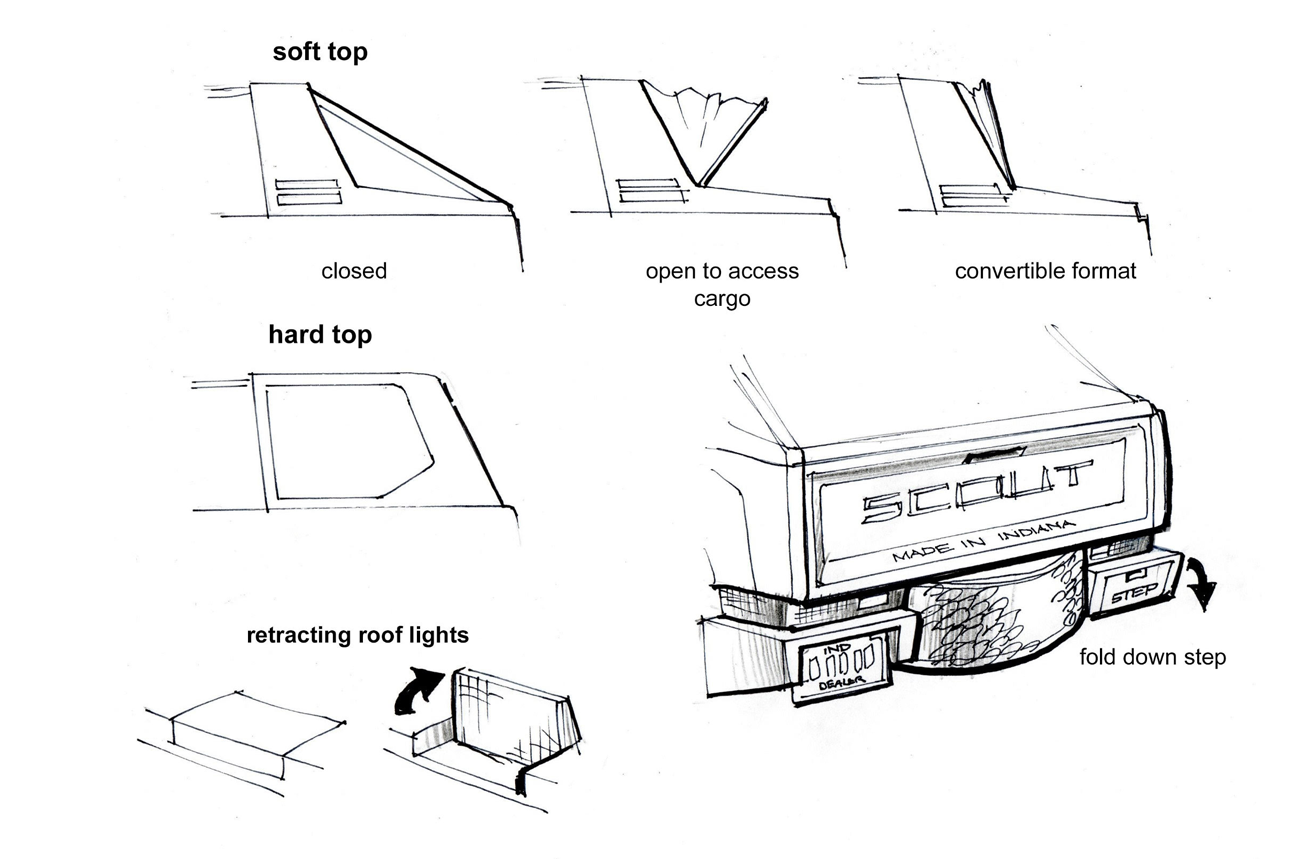 There’s a winch behind the front license plate, which folds down, and the idea of “folding” is carried throughout so much of the car: lights on the roll bar fold up, a bumper step folds down (also, I adore the use of a spare tire as an additional bumper element) and that rear fastback soft top folds up and out of the way, into the roll bar, in a very clever variant on the usual soft top theme.

Inside, at the rear–well, I guess it’s only sort-of inside, with the roof panel off and the soft top folded up–we have all kinds of other foldy goodness going on: 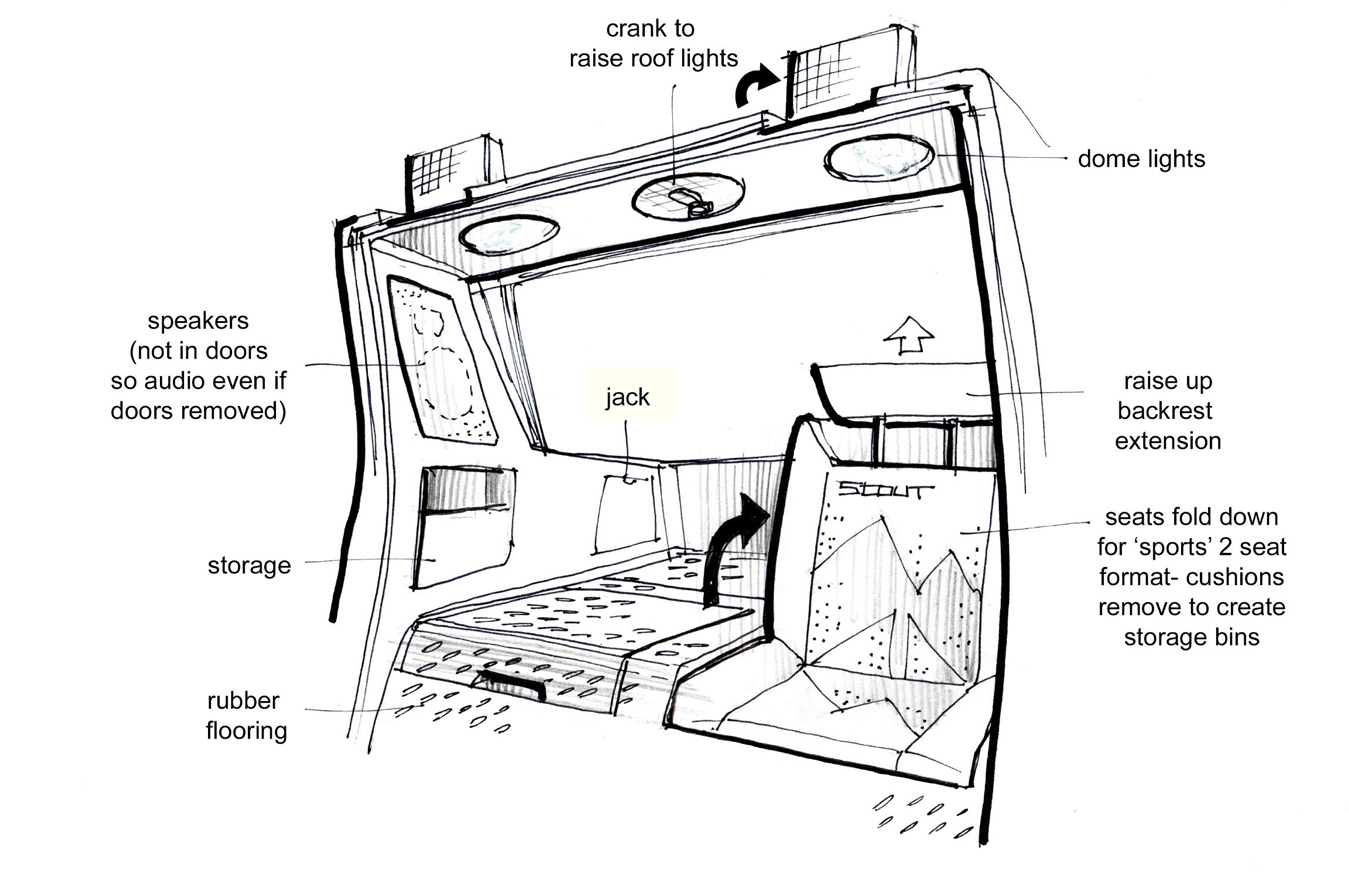 Those crank-operated roof lights! And look at the fantastic way the seats fold flat to form a cargo bed! It reminds me a bit of how the VW Thing’s rear seats folded down to make a cargo platform, just more refined: 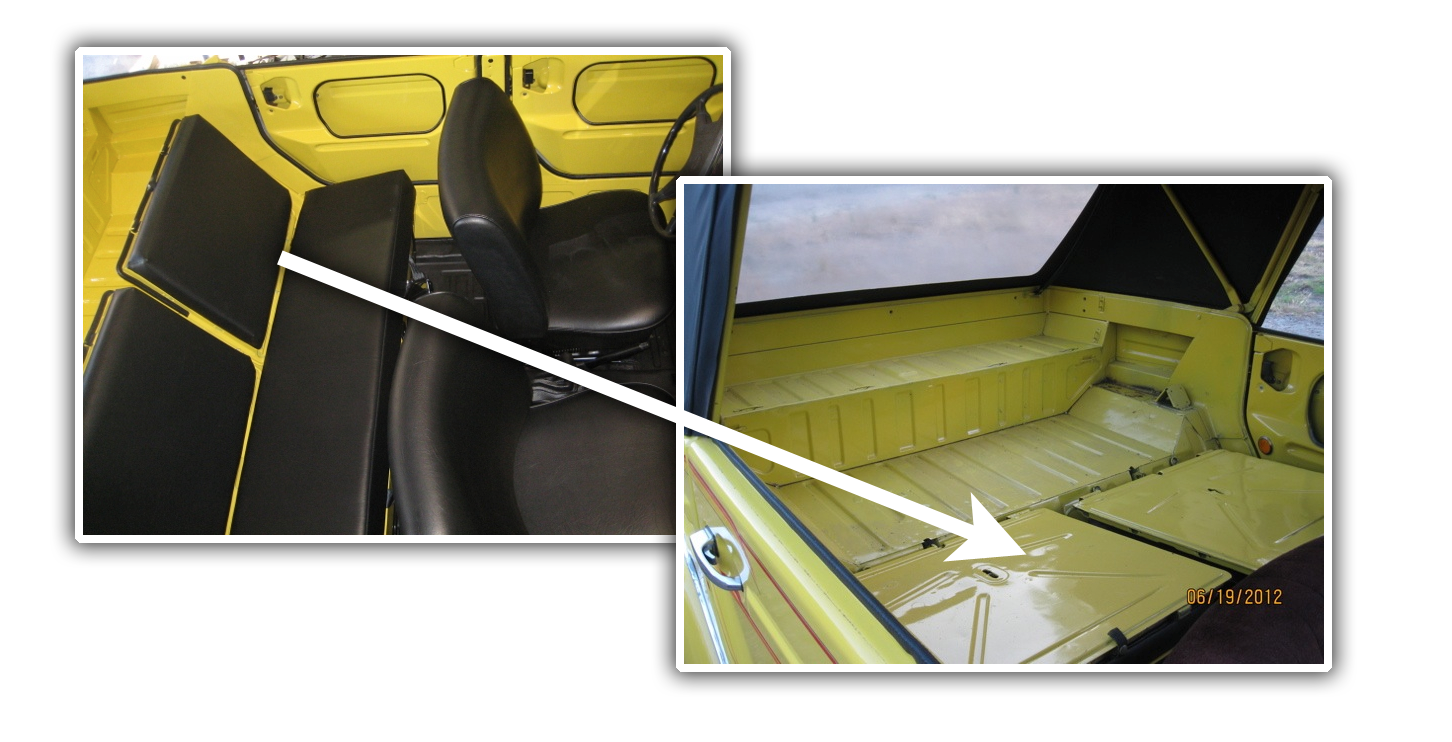 Plus, the idea that you could remove the seat cushions to make a pair of enclosed storage bins? Brilliant.

Like all good off-roaders, the Scout should be able to shed its doors, easily, and The Bishop has come up with a very clever, tool-free method: 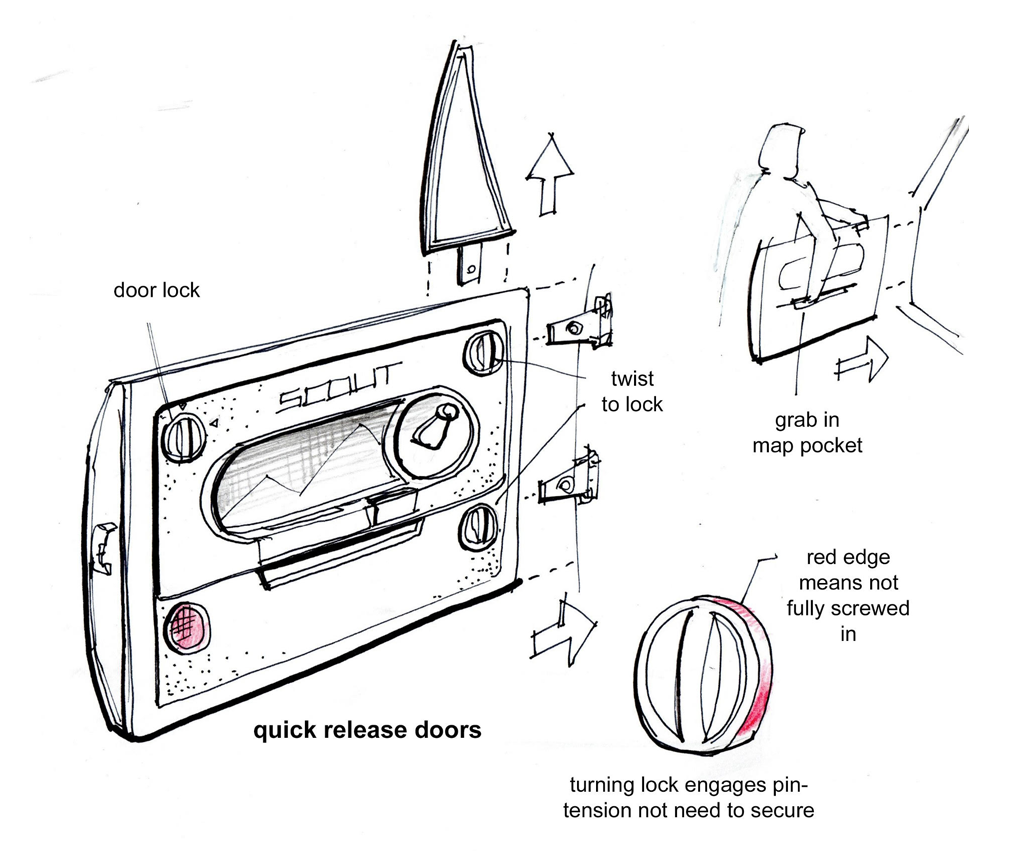 I suppose how well this all works is dependent on how much IH cheaped out or not on the materials; if those turn lock mechanisms are cheap plastic, these would become a nightmare, but if they’re actually metal, then we’ve got something here.

My favorite bit, though, might be this dash concept: 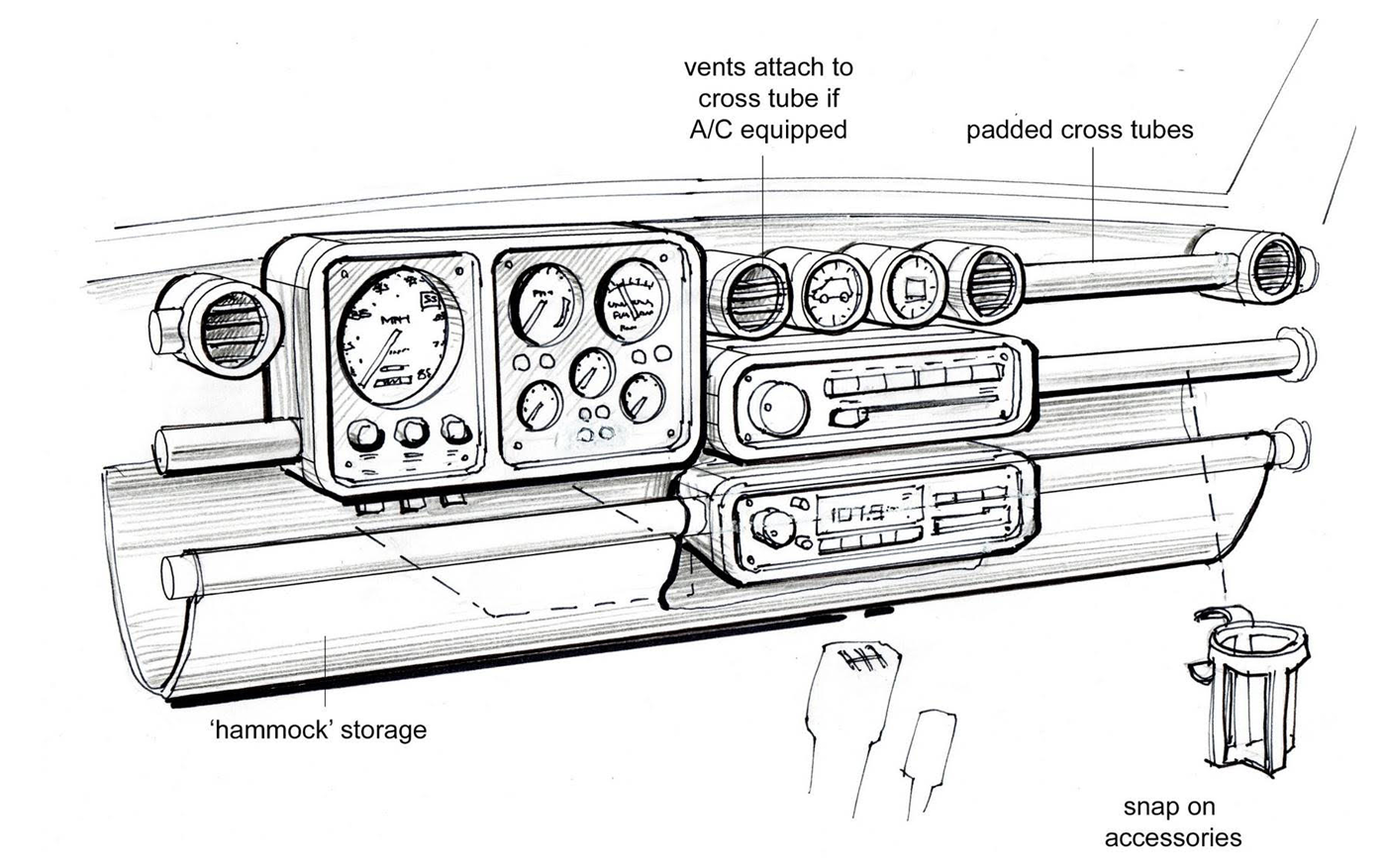 Those cross-beams would house separate instrument or radio or HVAC or vent units or whatever; if you have AC, then that top tube would be hollow, with ports for the vents. There’s a hammock-like thing that acts as a glove box for your stuff, too. Plus, the cross-bars would have a known diameter, so aftermarket companies could easily make clip/snap on accessories of all kinds.

It’s sort of like the dash design of a Fiat Panda, just a bit more industrial: 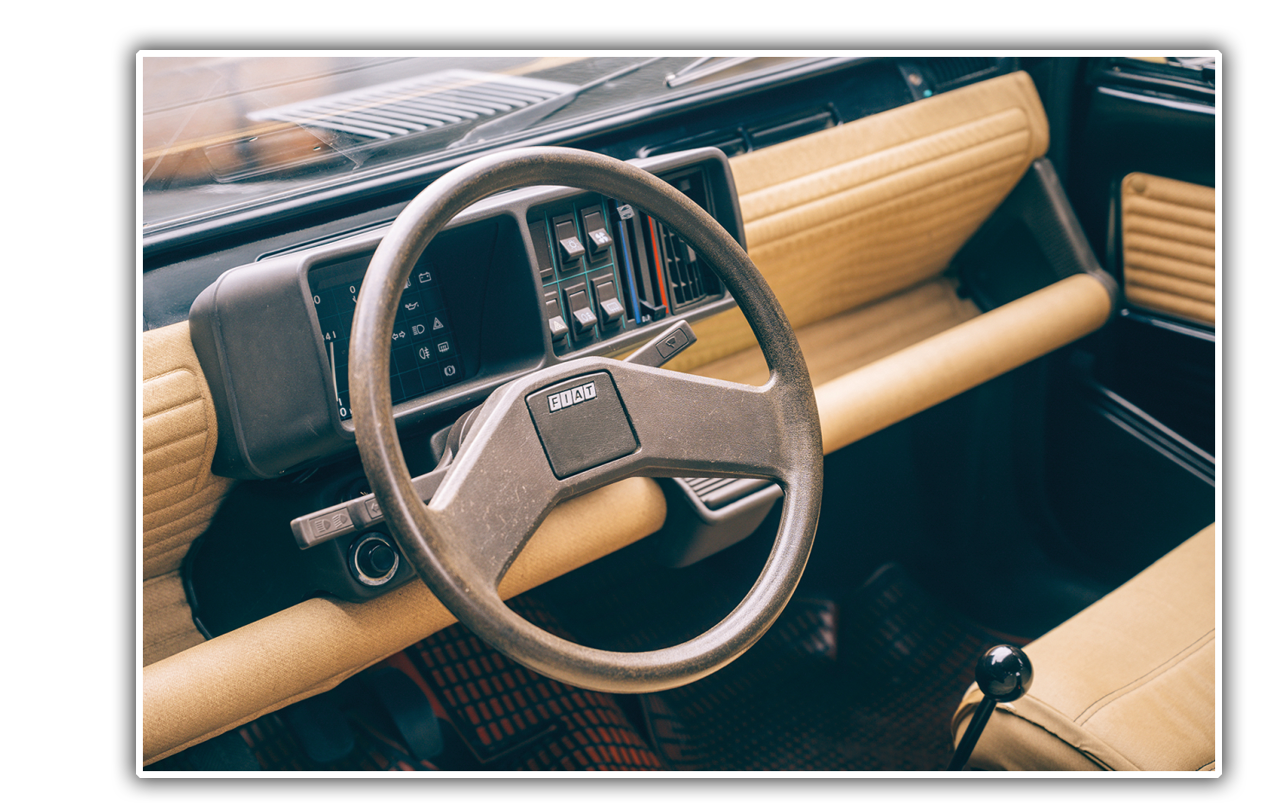 The Bishop’s feverish imagination went on to concoct a whole line of these Scout-based vehicles, including long-wheelbase replacements for the old Travelall and pickup trucks: 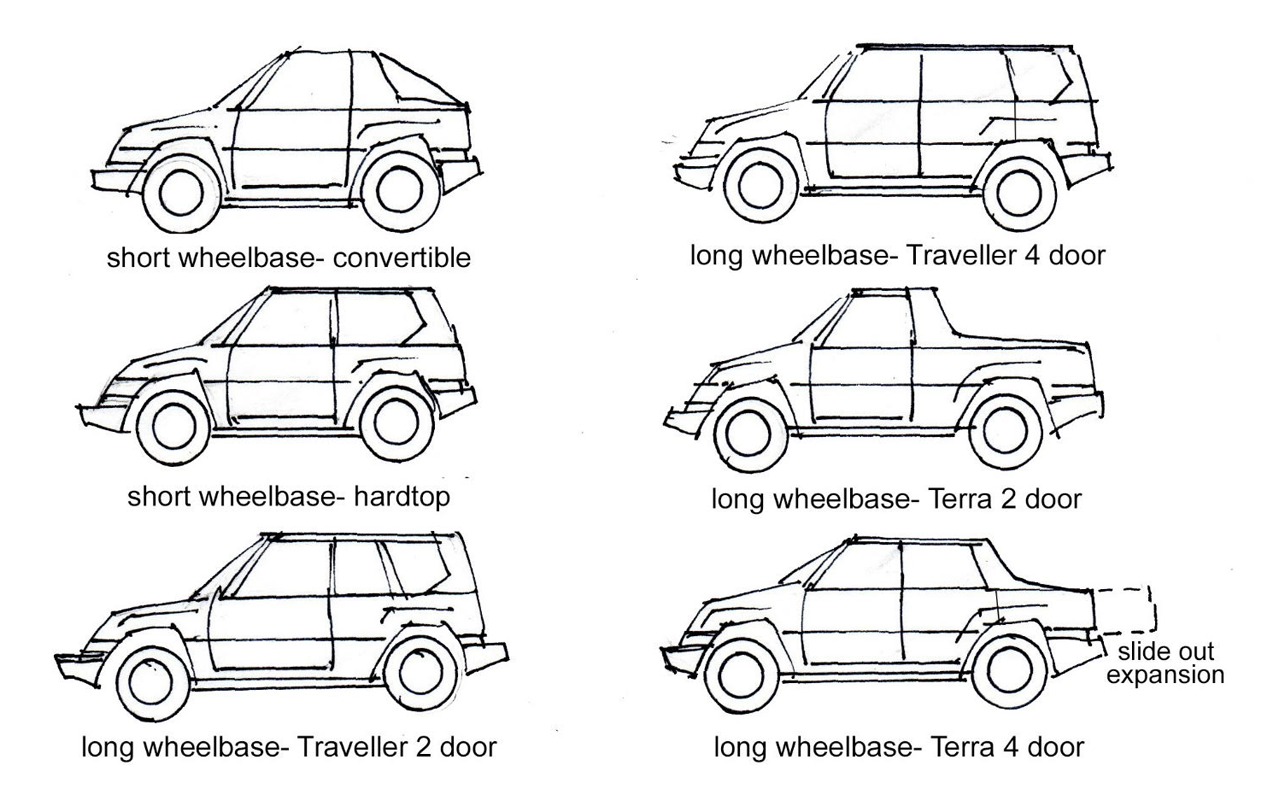 I especially like that drawer-like slide-out bed extender, which he sketched in more detail: 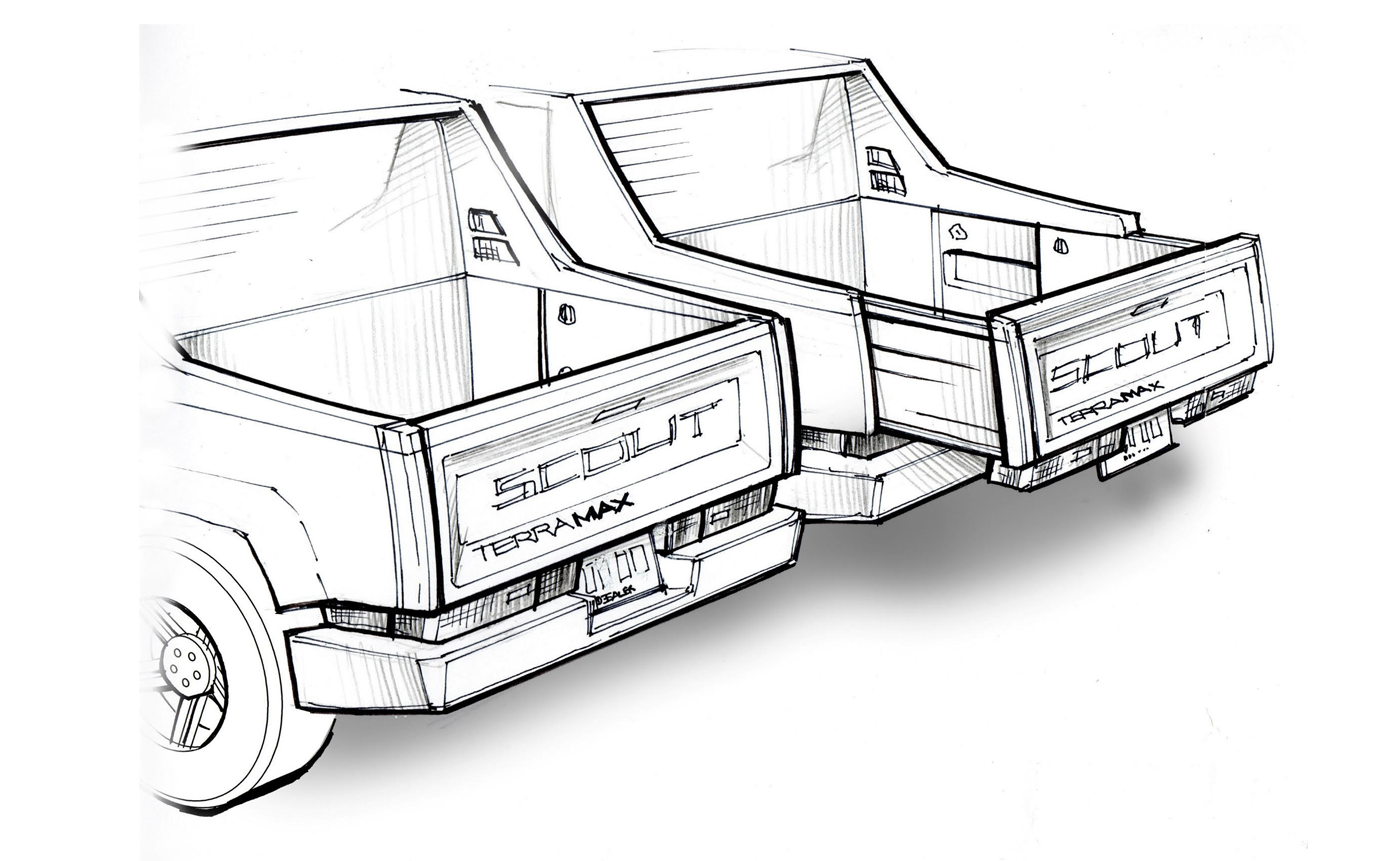 I guess maybe a fold-over section of the bed floor would flop backwards to make the floor of the extended portion? It seems pretty clever to me. Those taillights would need extendible wiring, though, and I could see that wearing out and being a constant pain once these things started getting old.

Regardless, this Scout That Wasn’t is full of some great ideas that I hope smart designers from major automakers are looking to steal as we speak.

More folding stuff on our SUVs, carmakers! It’s what the people want!

I'm a co-founder of the Autopian, the site you're on RIGHT NOW! I'm here to talk to you about taillights until you cry and beg me to stop, which I absolutely will not. Sorry. Hug? Also, David's friend.
Read All My Posts »
PrevPreviousAfter A Brief Return From A Brief Hiatus, Mini Is Temporarily Discontinuing The Manual Gearbox Again
NextThis Optical Illusion Of A Yawning Chasm In A Tunnel Messes With A Driver’s Head Just Like It’ll Mess With YoursNext