Facebook-f Twitter Instagram Rss
Menu
Menu
Home » After More Than A Year, I Finally Got My Nissan Pao Back And Damn It Feels Good Except For A Coolant Leak

After More Than A Year, I Finally Got My Nissan Pao Back And Damn It Feels Good Except For A Coolant Leak 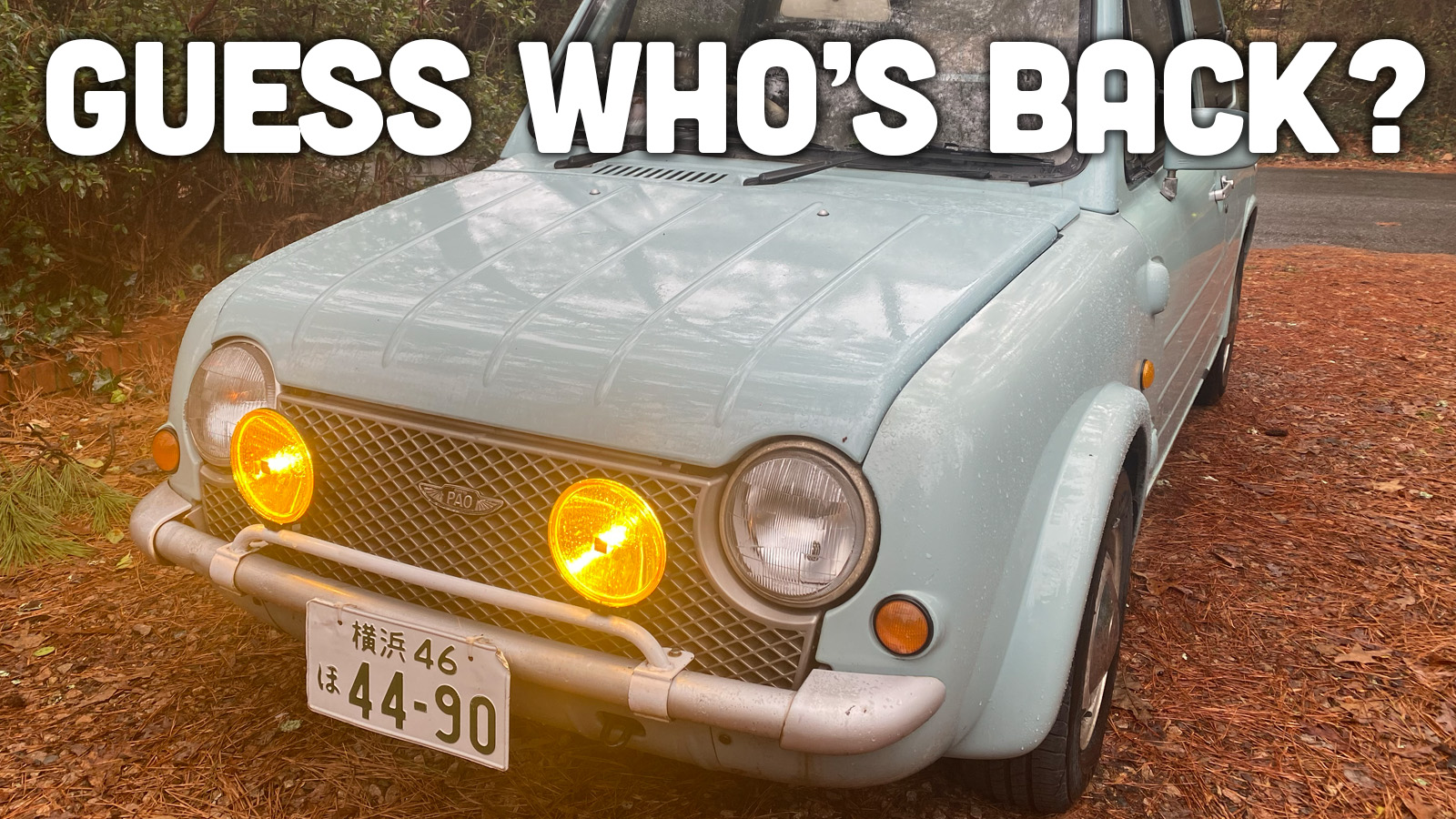 I’m still a little stunned when I think about how I haven’t really been able to drive my usual go-to daily driver, a 1990 Nissan Pao, for over a year. That’s because in October of – holy shit – 2021, I smacked into a big, stupid deer, and while thankfully my kid Otto and I were fine, the deer was forced into early retirement from the being alive business, and my little Pao had its face knocked in pretty severely. Over the weekend, I finally got my automotive pal back, and I’m absolutely thrilled. There’s still one issue to resolve, but it’s minor, and it hasn’t dampened my excitement, even as it dampens the engine bay. So why did it take over a year? Well, I’ll try to explain. 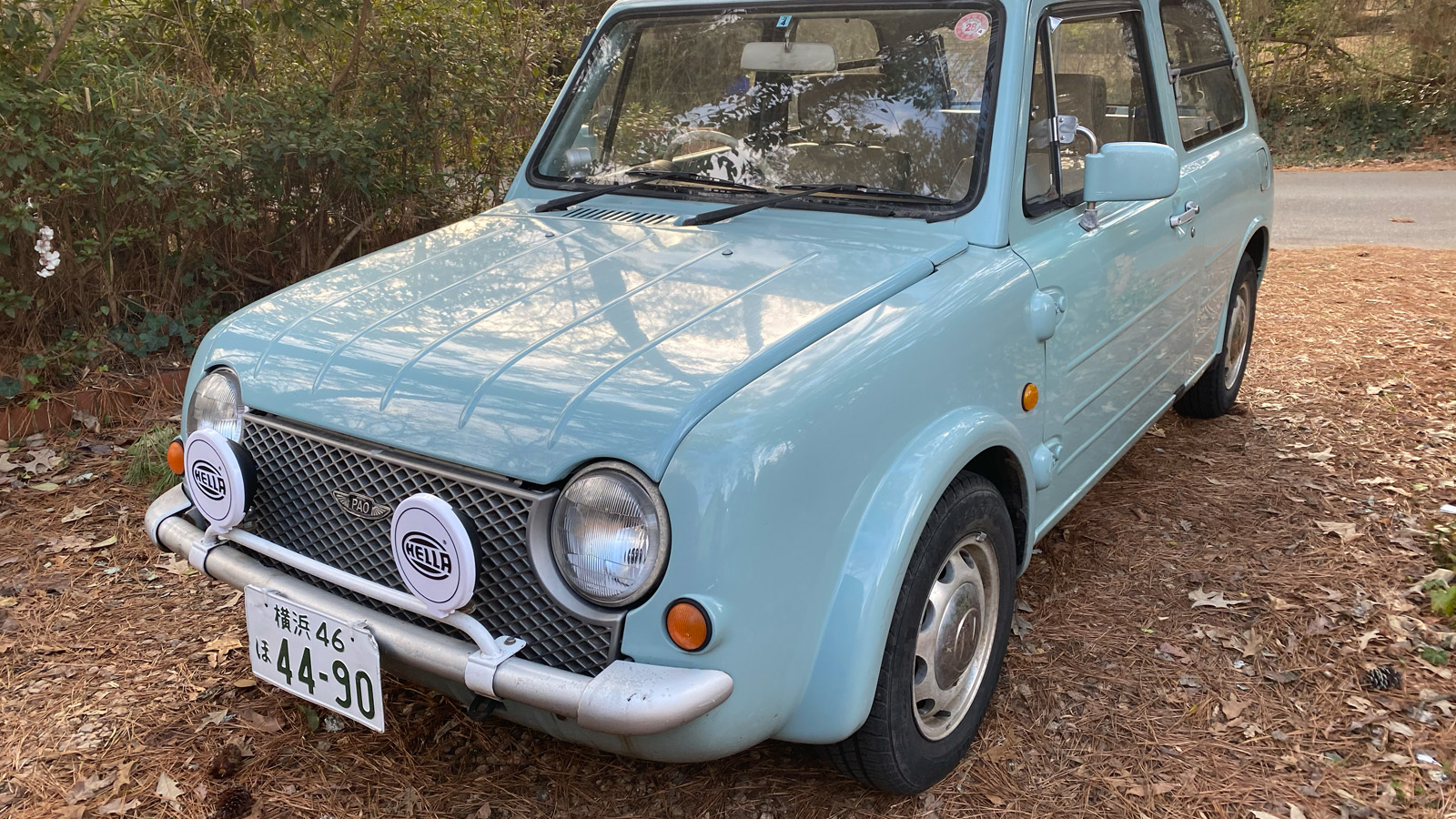 Before I do that, though, I have to just take a moment and geek out about how happy I am to have this car back and how much I’ve missed it. I’ve wanted a Pao ever since I saw one in some car magazine in the late 1980s, when it was just a show car. It felt like absolute, impossible unobtainium to me at the time, not even a forbidden fruit, because if something is forbidden, then that means there’s at least a chance you might encounter it, and be told, hey, let go of that. But a Pao? To a kid growing up in North Carolina in the ’80s? It may as well have only been sold on Mars.

But, time is a funny thing, and before I knew it, it was the late 1990s and early 2000s and I was in Los Angeles and I saw a Pao – most likely not exactly fully legally imported, but I’m no snitch – around where I lived in Los Feliz. All my old ardor rekindled, and while it took a while, I finally got to have my very own Pao, a car that somehow embodied the plucky, friendly, rugged-yet-cute ethos of cars that I’ve always loved – at the end of 2017.

Okay, so it took over daily driver duties from my beloved but aging Beetle, and all was great. Until the deer, which I smacked into after driving the Pao with my kid and I three hours into the mountains with no problems at all; it was at night, near home that the wet smack of venison happened. 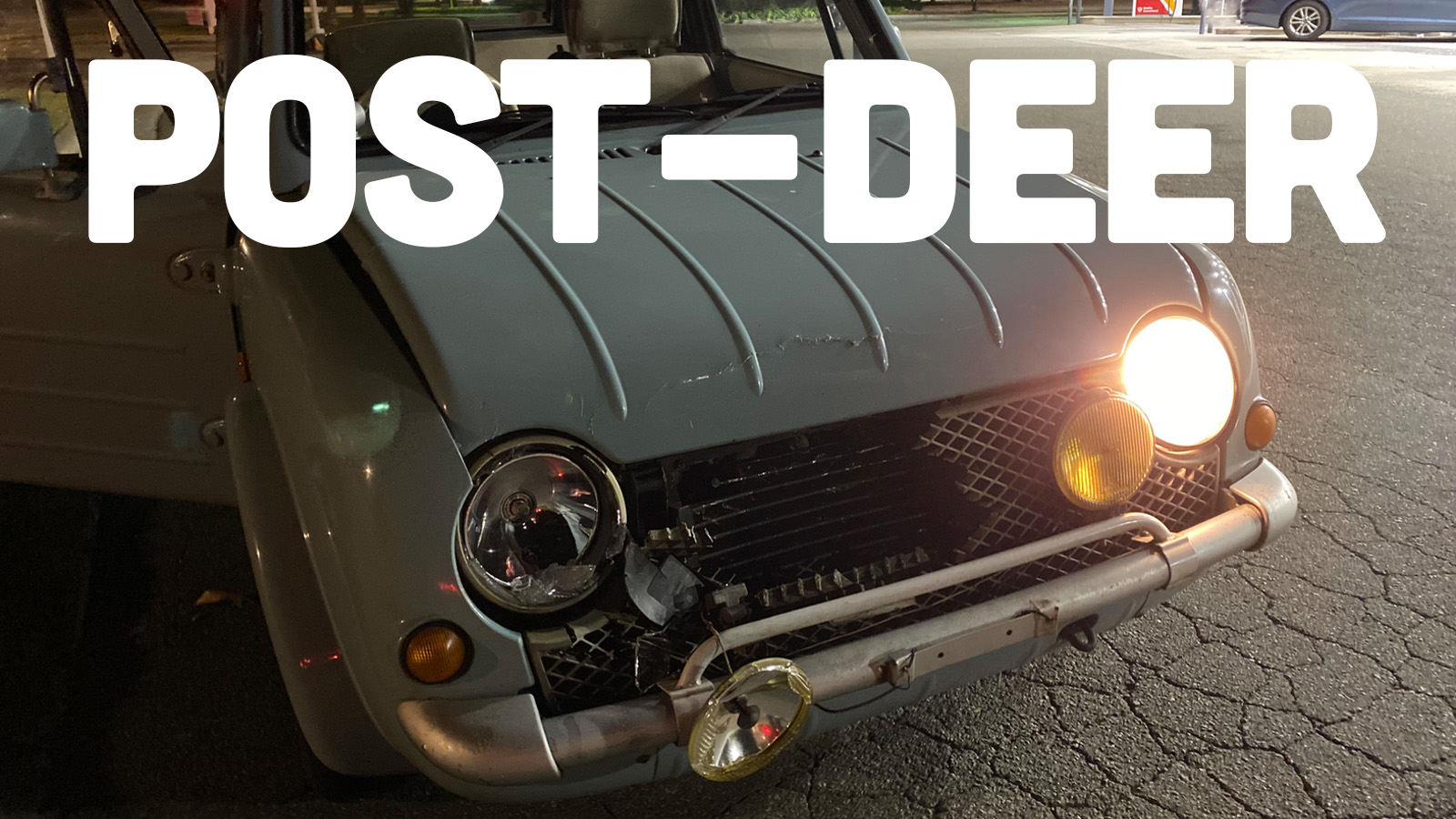 Right after the wreck, the insurance adjusters looked at the car and it seemed, incredibly, to be mostly body damage. The engine was mostly fine, save for the A/C condenser and some hoses. Or so they thought.

Finding parts wasn’t easy, and I had to order a hood from Japan – the hood was cheap enough, $150, but shipping was $600. Headlight and grille came via a Pao shop in the UK, found via the Pao Owner’s Group on Facebook. It looked good as new again! Well, maybe the hood color didn’t quite match how the fenders faded but you know what? I don’t care at all about that. Just part of the character of the car. 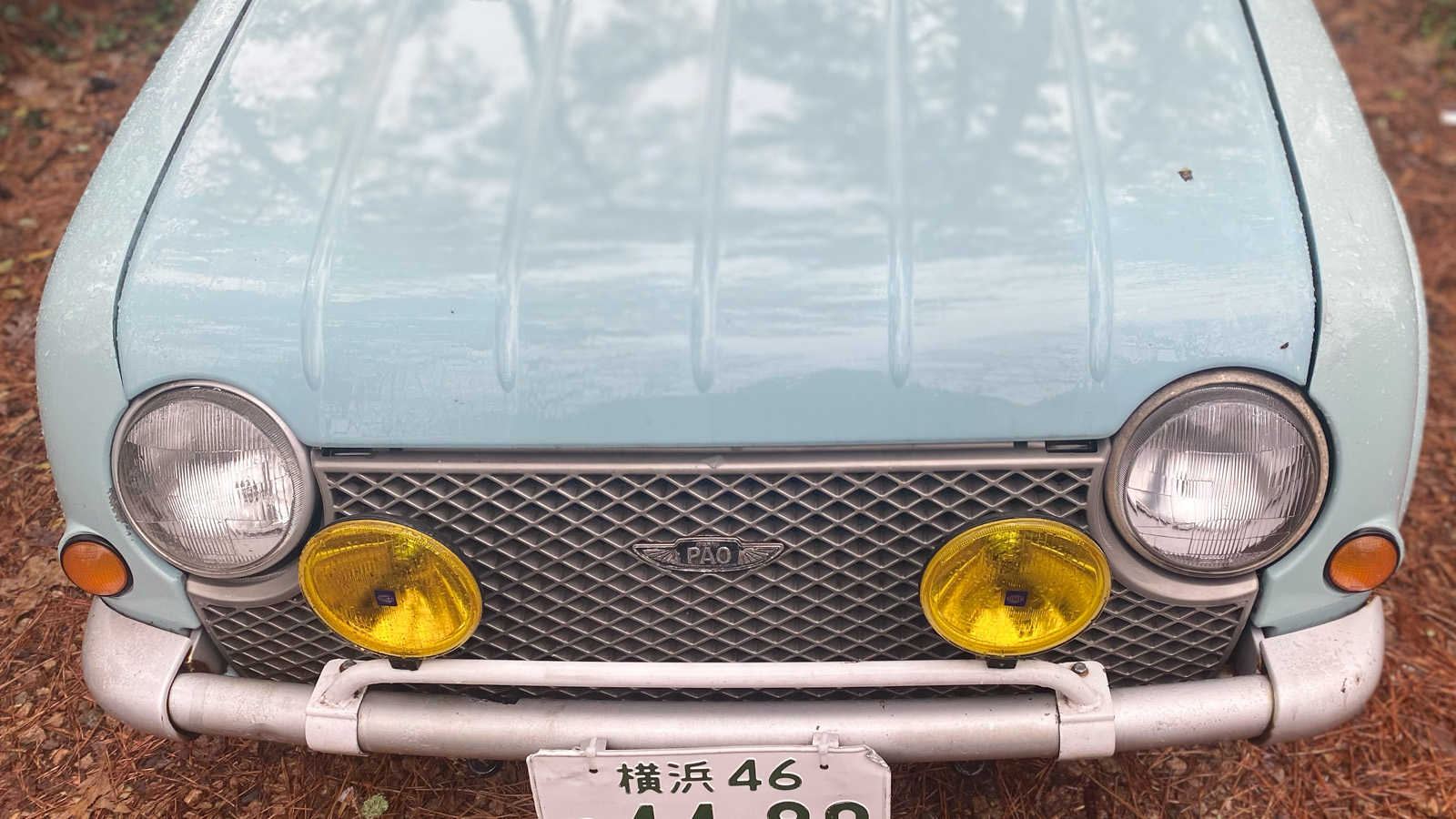 Most of the major bodywork was done pretty quickly and well, but the body shop wanted to send the car out to someone else to have the foglamps re-installed, and that’s when it all went to feces. 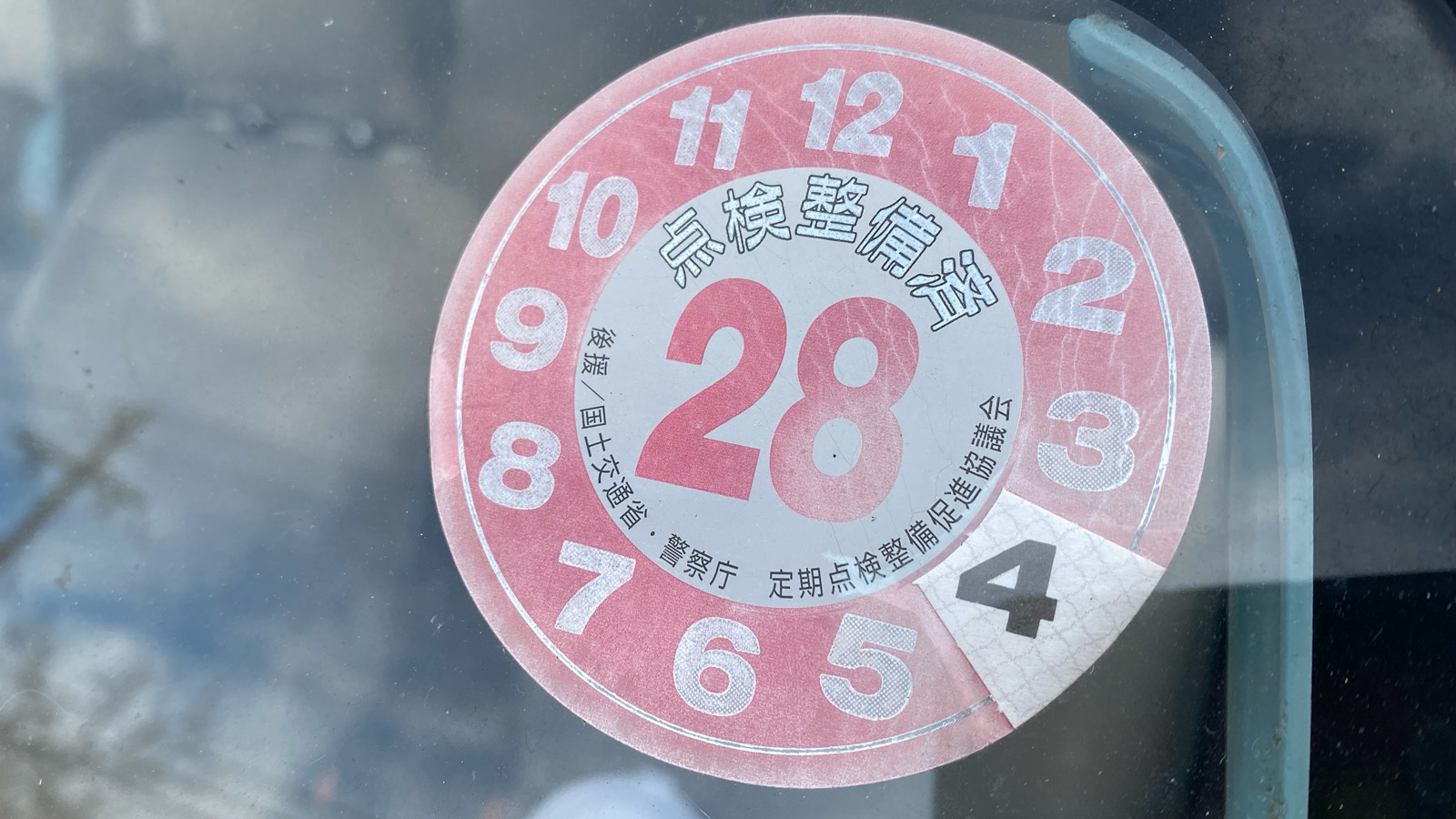 See, nobody seemed to notice a pinhole radiator leak, so on the trip to the shop to do the electrical work, the car overheated, cooked the head gasket, and all of the associated problems that brings. So now it needed a new radiator, new head gaskets, the head needed machined, all that. And, if the head’s going to be off, I’d be crazy not to replace the timing belt, which was last checked during, I think Emperor Akihito’s reign, which I’m told is how Japanese dates on these stickers work. 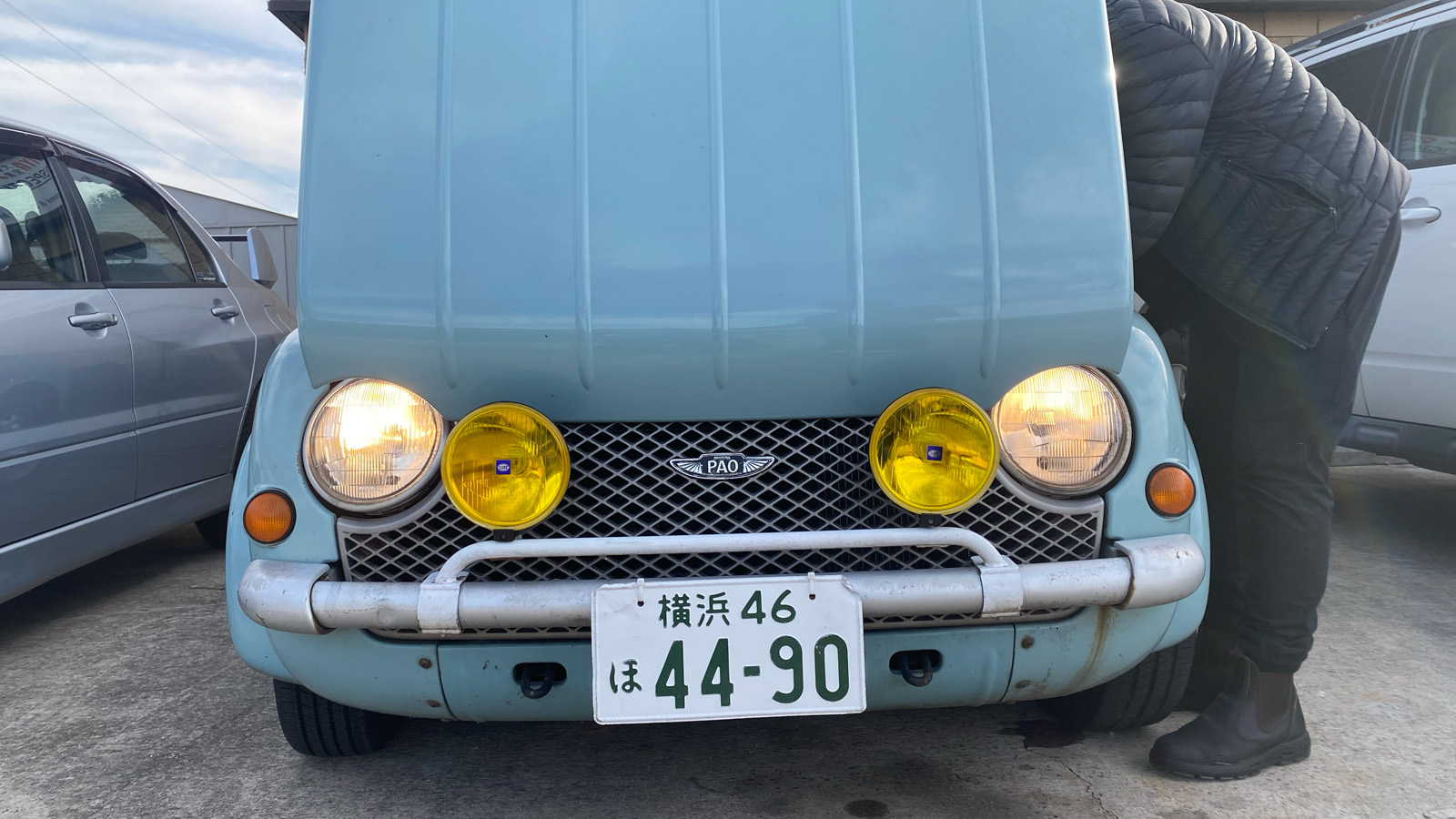 My insurance was actually great; since the damage was caused by the initial wreck, they covered the mechanical work, too, so thanks for that. The problem was finding a shop to work on a strange car. I found a willing shop, but despite good intentions, the car sat for months and months with no one getting to it at all. To their credit, they eventually realized they’d never get to it, and paid to have it towed to a JDM shop I didn’t realize was in the area: Omiya Motorsports. 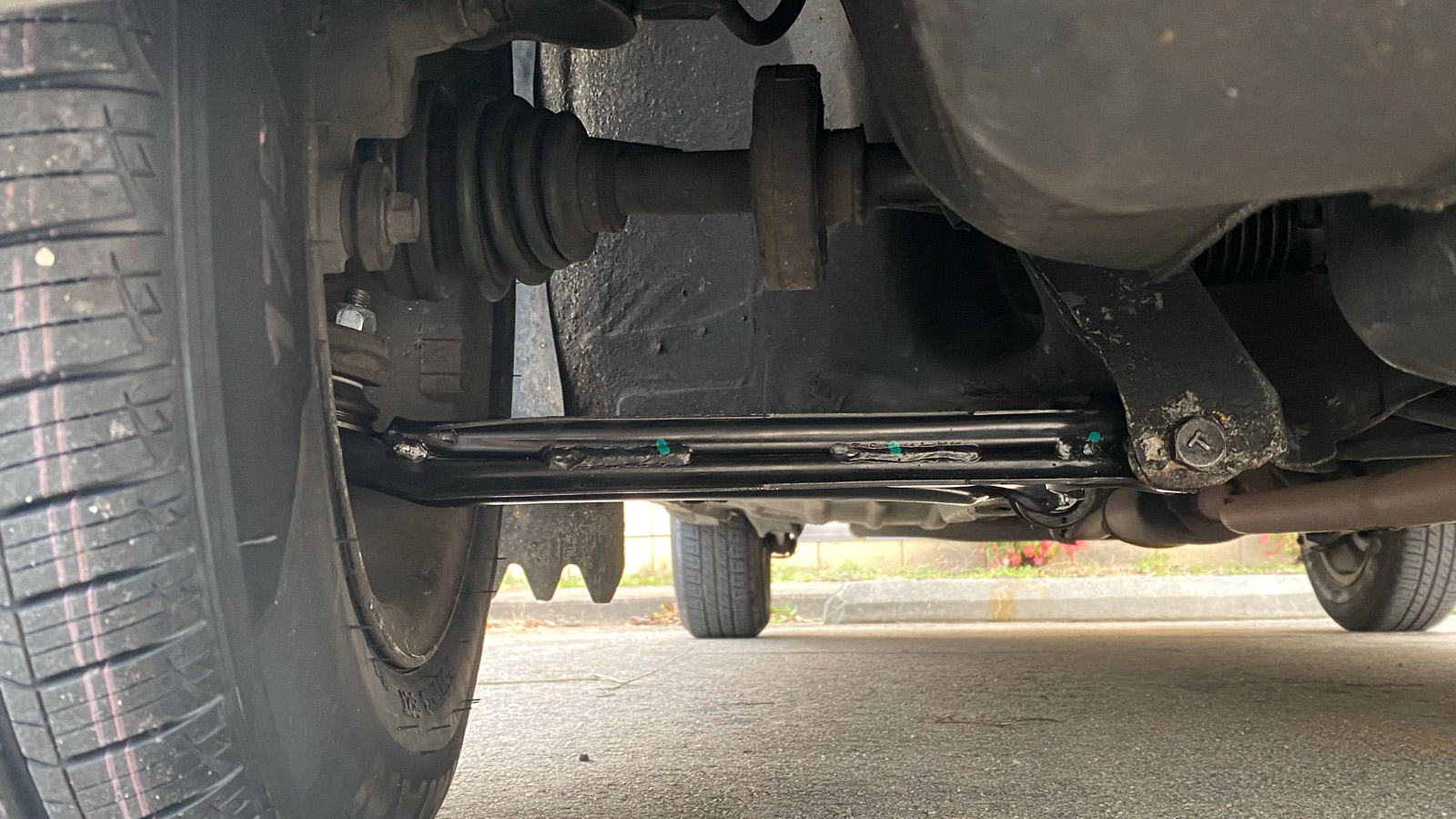 While it still took a while, mostly to get parts sourced and shipped, Omiya was familiar with the little 987cc Micra engine at the heart of the Pao, and got a nice aluminum radiator, new timing belt, water pump, gaskets, all the stuff. Plus, they fixed a leaky brake cylinder and replaced the control arm with the bushing I’d made from garden hose years ago. Oh, and replaced the tire that the garden hose bushing caused to wear all wrong. 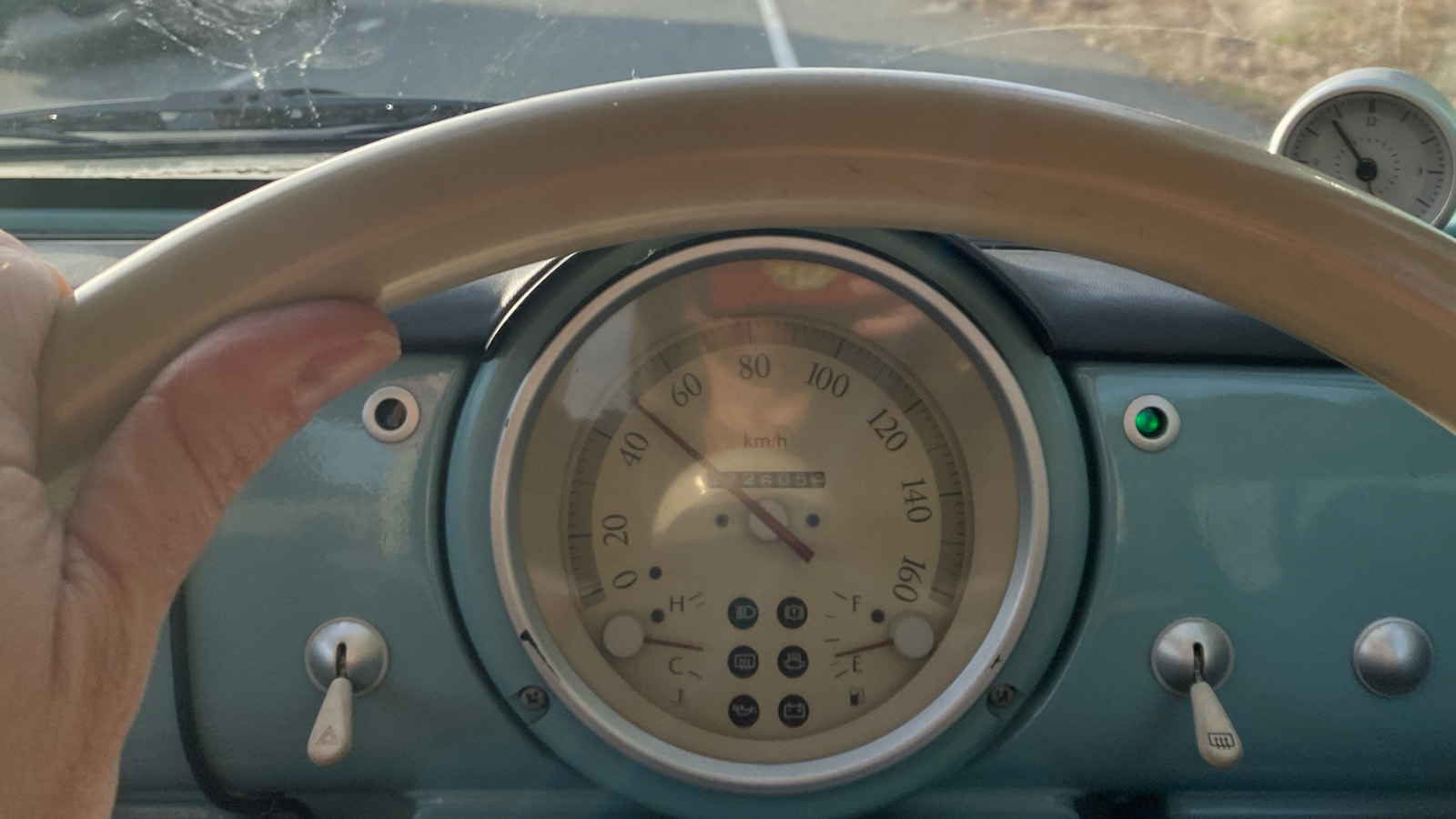 The carb adjustment was tricky, and I’m still getting used to how to best start it when cold, but once warmed up, the little guy runs like a top, with all of those 52 horses so very eager to help out. I forgot how easy this car is to shift, with a clutch as light as just-baptized marshmallows and a satisfying little shifter. The car is just a featherweight little gem, fun and easy to whip around. I missed it so much. 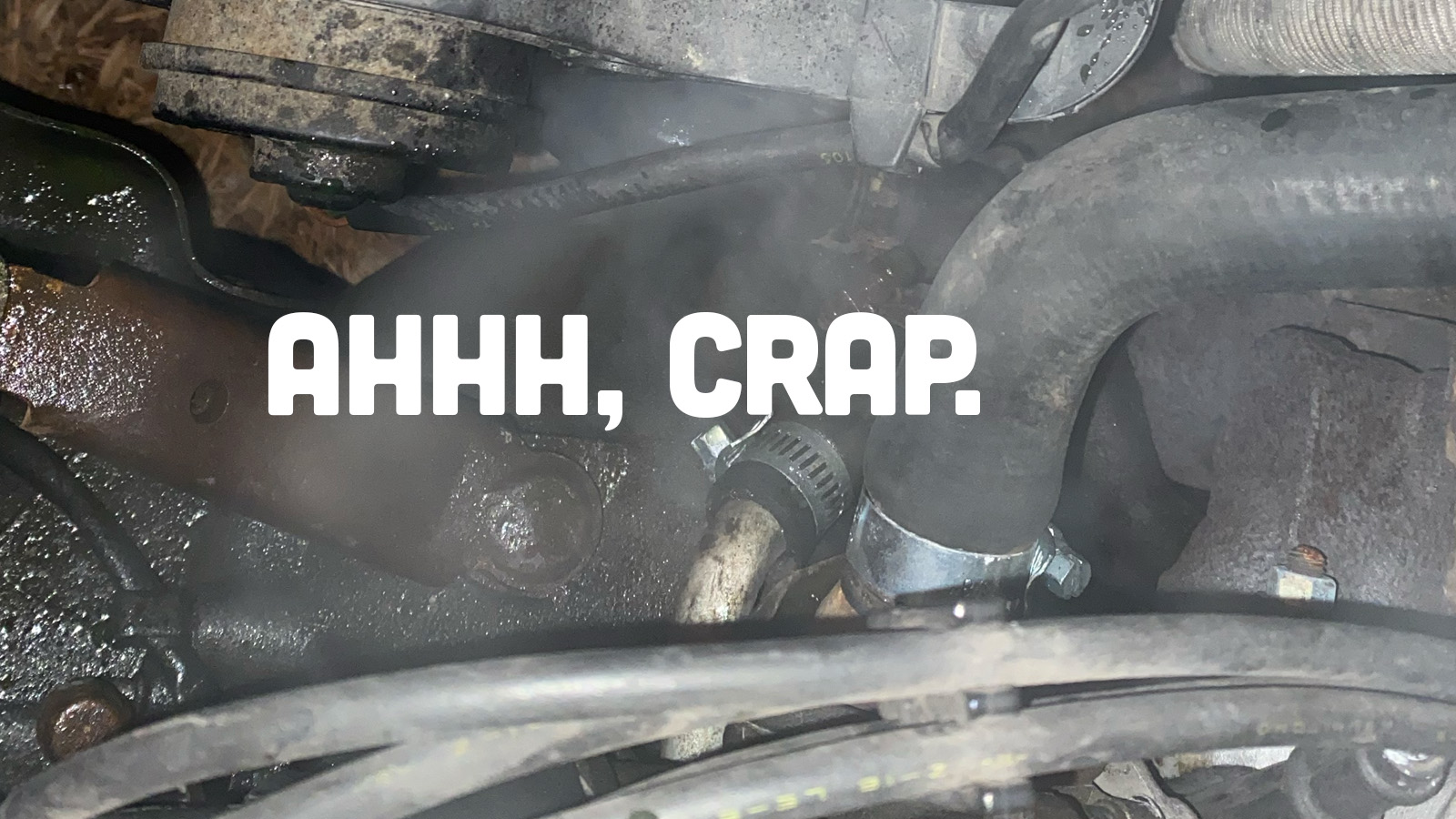 It does need a good bath and cleaning, of course, and sitting for a year made the driver’s side window roll-down stiff, so I need to pull the door panel and see what’s up there. Oh, and there’s a pinhole leak in one of the radiator hoses, which is an ass-pain, but easily fixed. I’d rather have gotten it back and not had to deal with a spray of coolant mist and billowing steam, but, well, nothing can be too easy, right? 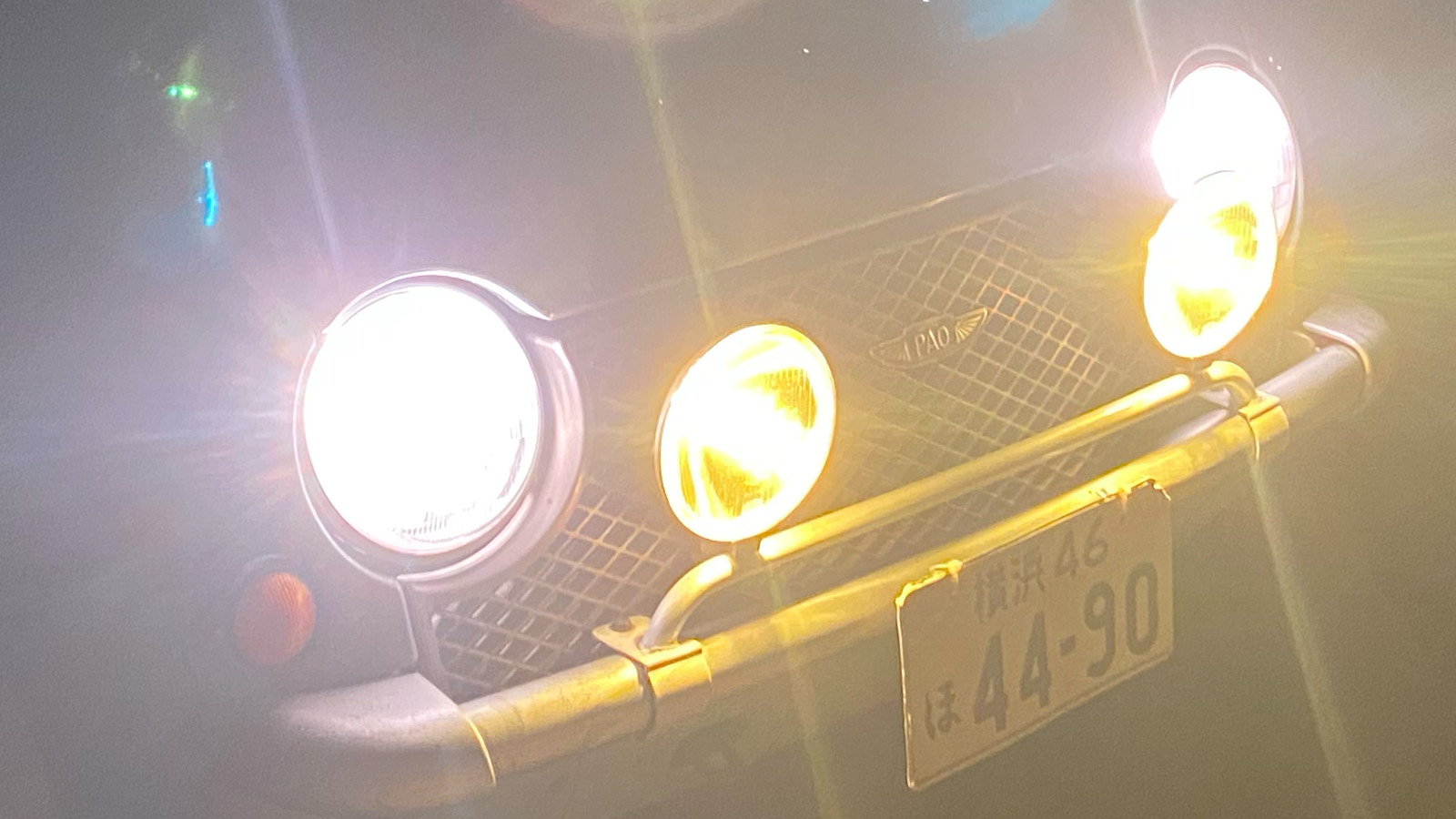 One exciting detail is having a nice set of big, yellow foglamps back, because I love big yellow foglamps, for reasons I can’t begin to completely understand. I had toyed with keeping the one surviving original lamp and a small, clear, mis-sized one, but I’m happier with these nice big Hella yellow fogs. They even have covers, which give the car a sort of comical rally-look: 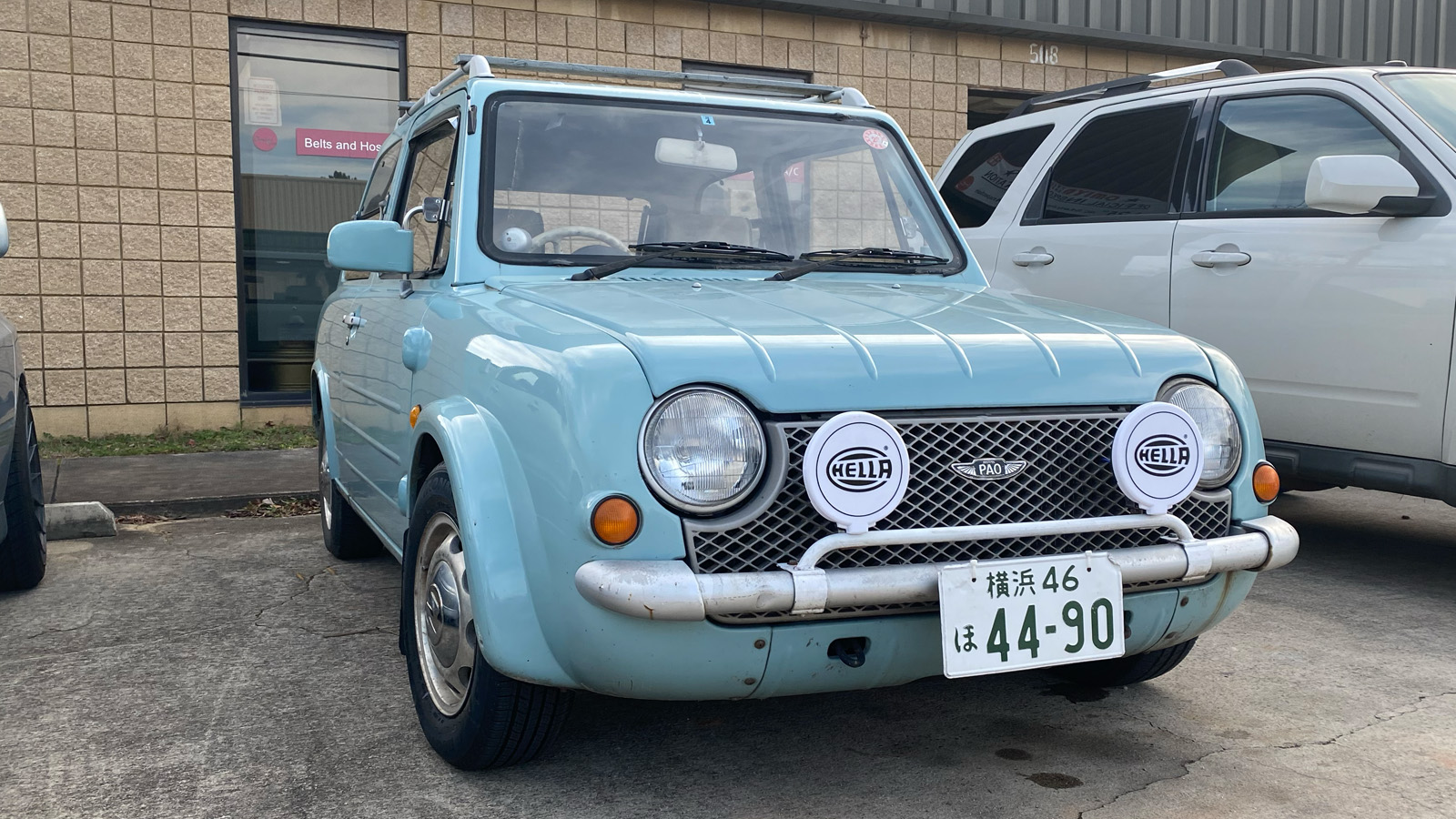 I’m just thrilled to have my car back. A year is a long-ass time to be without your car, and while I’ve enjoyed driving the Yugo and The Marshal around a lot, I’ve missed this little affable weirdo so much. You know, the fact I had other cars to drive at all is likely also a factor in the slow pace. I wasn’t ever without something to drive, so that definitely takes the time pressures off, which is, of course, good and bad. Good to not need to rush anything, especially when sourcing parts from across the world is involved, but sometimes a firmer deadline does help get things actually, you know, done.

It feels a little weird driving on the right again, always turning on my wipers when I want to turn, adjusting to the 52 horses after being spoiled by the Yugo’s ravenous 67 horsepower, but I’m falling for its charms all over again.

I'm a co-founder of the Autopian, the site you're on RIGHT NOW! I'm here to talk to you about taillights until you cry and beg me to stop, which I absolutely will not. Sorry. Hug? Also, David's friend.
Read All My Posts »
PrevPreviousStates Banned Japanese Imports For No Good Reason And The People Are Fighting Back
NextHere’s What A Sub-$9,000 Car Looks Like From China’s Largest EV MakerNext