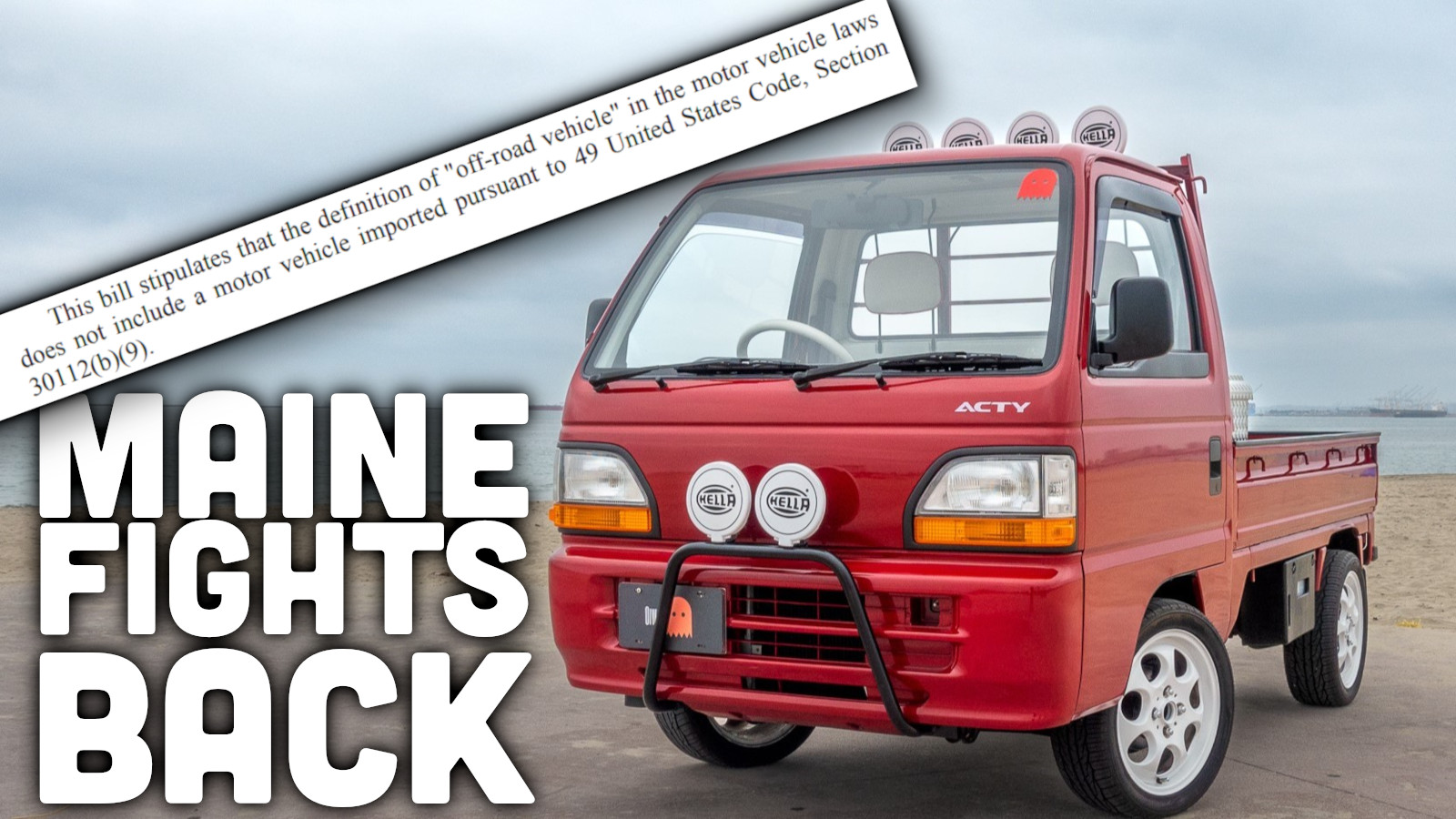 For almost two years, many owners of Japanese Domestic Market cars have been living a nightmare. Maine and Rhode Island began revoking the registrations of vehicles that were legally imported and registered. Those states were joined by New York, Georgia, and Pennsylvania, each imparting upon JDM vehicle-owners varying levels of difficulty. As we head into 2023, there’s some good news, as there is now a bill in Maine’s legislature that seeks to undo the damage.

Back in the summer of 2021, the Maine Bureau of Motor Vehicles kicked off an alarming trend. Owners of Mitsubishi Delicas received letters from the state stating that owners’ beloved vans were “mini-trucks” that did not meet federal emissions and safety requirements and thus could not be driven on the state’s roads. Initially, this caused a lot of confusion because the Mitsubishi Delica is far larger than the vehicles that fall under Japan’s adorable Kei class, and they certainly weren’t mini-trucks. Besides, these were vehicles that were older than 25 years old and thus were exempt from meeting Environmental Protection Agency and Federal Motor Vehicle Safety Standards (FMVSS).

So, what gives with this stuff about not meeting standards?

Why You Can’t Register A Mitsubishi Delica In Maine

The state later clarified to say that calling the Mitsubishi Delica a mini-truck was a mistake, but that misuse of terminology wasn’t going to change anything. The state changed its statutes to indicate that anything that didn’t pass FMVSS and EPA requirements was now an off-road vehicle, which the state does not register for road use. On June 15, 2021, the state amended its 29-A MRSA 354 statute to define an off-road vehicle thusly:

‘Off-road vehicle’ means a motor vehicle that, because of the vehicle’s design and, configuration, original manufacture or original intended use, does not meet the inspection standards of chapter 15, the Federal Motor Vehicle Safety Standards, the United States Environmental Protection Agency’s pollutant requirements or the National Highway Traffic and Safety Administration’s crash testing standards and that is not a moped or motorcycle.

Suddenly, the owners of vehicles imported from Japan learned something interesting about how America’s laws work.

The National Highway Traffic Safety Administration requires that a vehicle either meets FMVSS or is at least 25 years old to be exempt. The EPA, on the other hand, either wants the vehicle to meet emissions standards or be at least 21 years old. However, this doesn’t mean that you’ll be able to register it and drive it on the road because vehicle registration is handled by the states. In fact, the state of Wisconsin says this, emphasis mine:

The National Highway Traffic and Safety Administration (NHTSA) and the Environmental Protection Agency (EPA) allows for vehicles to be imported into the country once the vehicle has reached a certain age. However, NHTSA and EPA are not responsible for regulating the operation of motor vehicles on public roads in the U.S. or for titling or registering motor vehicles for such operation: that is the responsibility of the individual states.

Maine was only the start. Soon, Rhode Island, New York, Pennsylvania, and Georgia joined in. These states were a little less aggressive than Maine and reportedly have primarily targeted vehicles within the Kei class of tiny cars.

Depending on the state, some owners of imported vehicles got lucky. For example, Pennsylvania grandfathered in some previously-registered vehicles. The state will also allow Kei vehicle owners to obtain an Antique Registration. This allows them to occasionally drive their vehicles, which isn’t ideal, but it’s better than an outright ban.

Meanwhile, enthusiasts in other states are discovering that the struggles aren’t limited to the east coast. For example, in Wisconsin, the state does not register Kei-class vehicles at all. Those seeking to register vehicles larger than Kei class are subject to a long list of requirements, including 1. The vehicle cannot be modified and 2. In order to register the vehicle, you have to have another vehicle that is registered as your primary vehicle. Weirdly, Wisconsin’s ban on Kei cars actually dates back to 2013.

The Meeting That Led To These Restrictions

In November 2021, I located the source of this madness, and it was the American Association of Motor Vehicle Administrators (AAMVA). This is a non-governmental non-profit lobbying organization composed of motor vehicle and law enforcement administrators and executives from all 50 states. Canada, Mexico, the Virgin Islands, and Washington D.C. get representation in the AAMVA as well. Among other things, the organization seeks standardization of laws across the states regarding traffic safety, vehicle titling, and driver licensing. AAMVA does not have legislative power but it does urge all member states to follow its “best practices.”

Vehicles imported from Japan and China have been on AAMVA’s radar since the late 2000s. Back then, the organization noticed how tons of Kei trucks were flooding American shores and the states didn’t really know how to handle them. It should be noted that a lot of these trucks weren’t older vehicles imported under the Imported Vehicle Safety Compliance Act of 1988, but newer trucks with speed limiters meant for farm or utility work.

In February 2010, representatives from several states and Canadian provinces met in Orlando, Florida to develop best practices for handling the influx of mini trucks. It was just one of many AAMVA meetings on the subject of vehicle imports.

Crash Test Experts Advise Against Kei Trucks In The U.S.

Soon after, the Insurance Institute for Highway Safety published an opinion that low-speed vehicles and mini trucks are unsafe and should be removed from the road. The opinion noted that starting in 2007, there was a trend of states allowing mini trucks on regular roads. That IIHS opinion focused on mini trucks with a governed 25 mph top speed, not trucks older than 25 years old imported without a limiter.

The AAMVA Wants The Mini-Trucks Off The Road

Still, just a year later, the AAMVA handed out a new opinion to member jurisdictions. Best Practice Regarding Registration and Titling of Mini-Trucks makes it clear that the AAMVA sought to remove these vehicles from the road:

By allowing on-road operation of used mini-trucks, Canada and the U.S. are accepting another nation‘s cast-offs—vehicles that no longer meet the exporting country‘s vehicle safety or emissions standards. Increasing the supply of older model vehicles in North America undermines government and industry efforts to improve vehicle safety and reduce vehicle emissions, as these efforts are largely dependent on fleet turnover. This risk can be reduced by placing restrictions on the use of these non-conforming vehicles in Canadian and U.S. jurisdictions.

The recommendation for restrictions largely didn’t happen in the aforementioned states until 2021, when Maine’s BMV, with the help of the DMVs of Georgia, Colorado, and South Dakota published Regulation of Off-Road Vehicles: Best Practices.

This document clamps down on imported vehicles in a way that doesn’t seem all that logical. You can read it for yourself, but the important parts are that the AAMVA’s definition of an off-road vehicle is broader than the NHTSA’s, and the organization specifically calls out Kei trucks that are 25 years and older.

Perhaps the most shocking part is that the AAMVA admits in the documentation that its recommendations may clash with existing laws. In that case, the organization recommends that a state just changes its laws until the recommendations are legal. That’s what Maine, Rhode Island, and the rest of these states have done.

If you want the full scoop on what’s going on, I recommend reading my explainer at the old lighting site. Since that was published, not a whole lot has happened. Individual car owners report some victories and some failures in getting their vehicles registered. These cases weren’t easy and sometimes involved taking things to court. Unfortunately, these individual battles do not change the underlying laws that created these fights in the first place. For residents in Maine, Rhode Island, New York, Georgia, Pennsylvania, and even Wisconsin, the hardest part about buying a car to import is not dealing with Customs, but with their own state.

Hope Is On The Horizon

First reported by SEMA Action Network, a part of the Specialty Equipment Market Association that lobbies for favorable vehicle laws, Rep. Shelley Rudnicki of Maine has introduced a bill that, if passed, would no longer class a vehicle that could be imported under the 25-year rule as an off-road vehicle. From SAN:

At the SAN’s request, State Automotive Enthusiast Leadership Caucus member Rep. Shelley Rudnicki has introduced a bill in Maine to allow on-road registrations to be issued for imported vehicles manufactured at least 25 years ago. Under federal law, these vehicles are exempt from federal safety and emissions standards. Current Maine law prohibits vehicles that do not meet these standards from being driven on public roads. The bill currently awaits consideration in the House Committee on Transportation.

That bill seeks to add just one sentence, emphasis mine:

‘Off-road vehicle’ means a motor vehicle that, because of the vehicle’s design and, configuration, original manufacture or original intended use, does not meet the inspection standards of chapter 15, the Federal Motor Vehicle Safety Standards, the United States Environmental Protection Agency’s pollutant requirements or the National Highway Traffic and Safety Administration’s crash testing standards and that is not a moped or motorcycle. “Off-road vehicle” does not include a motor vehicle imported pursuant to 49 United States Code, Section 30112(b)(9).

Rep. Rudnicki’s proposed definition of what constitutes an off-road vehicle is a small change, but a big one. The change states that vehicles that are legal to import under the 25-year rule would also be legal on the state’s roads.

It’s unclear what the chance of success is, but the bill will be going up against the AAMVA’s guidance, which was in part written by Maine BMV Registration Section Supervisor Nikki Bachelder. If, somehow, the bill succeeds, it can lay the groundwork for undoing the laws in other states and allow the owners of imported cars to enjoy their vehicles.

As of right now, the bill is still waiting for consideration in the House Committee on Transportation. Until then, the SEMA Action Network is asking residents of Maine to reach out to their lawmakers to ask for support on bill LD 63. We’ll be watching this one with hopes that perhaps JDM car owners in America will be able to breathe a little easier.

I have reached out to the Maine BMV for a comment on this pending legislation.

Mercedes is a lifelong fan of all things powered by an engine. When she isn't driving one of her five Smart Fortwos or her 14 other vehicles she could be found in the cockpit of a Cessna 172 or perhaps swimming in any body of water that she could find. She also has a deep love for buses of all kinds. Please send her buses. mercedes@theautopian.com Instagram: @mistymotors Twitter: @Miss_Mercedes30 Facebook.com/neonspinnazz
Read All My Posts »
PrevPreviousVolkswagen Is Suing So It Doesn’t Have To Pay What You Pay For The Same Repair Work
NextAfter More Than A Year, I Finally Got My Nissan Pao Back And Damn It Feels Good Except For A Coolant LeakNext