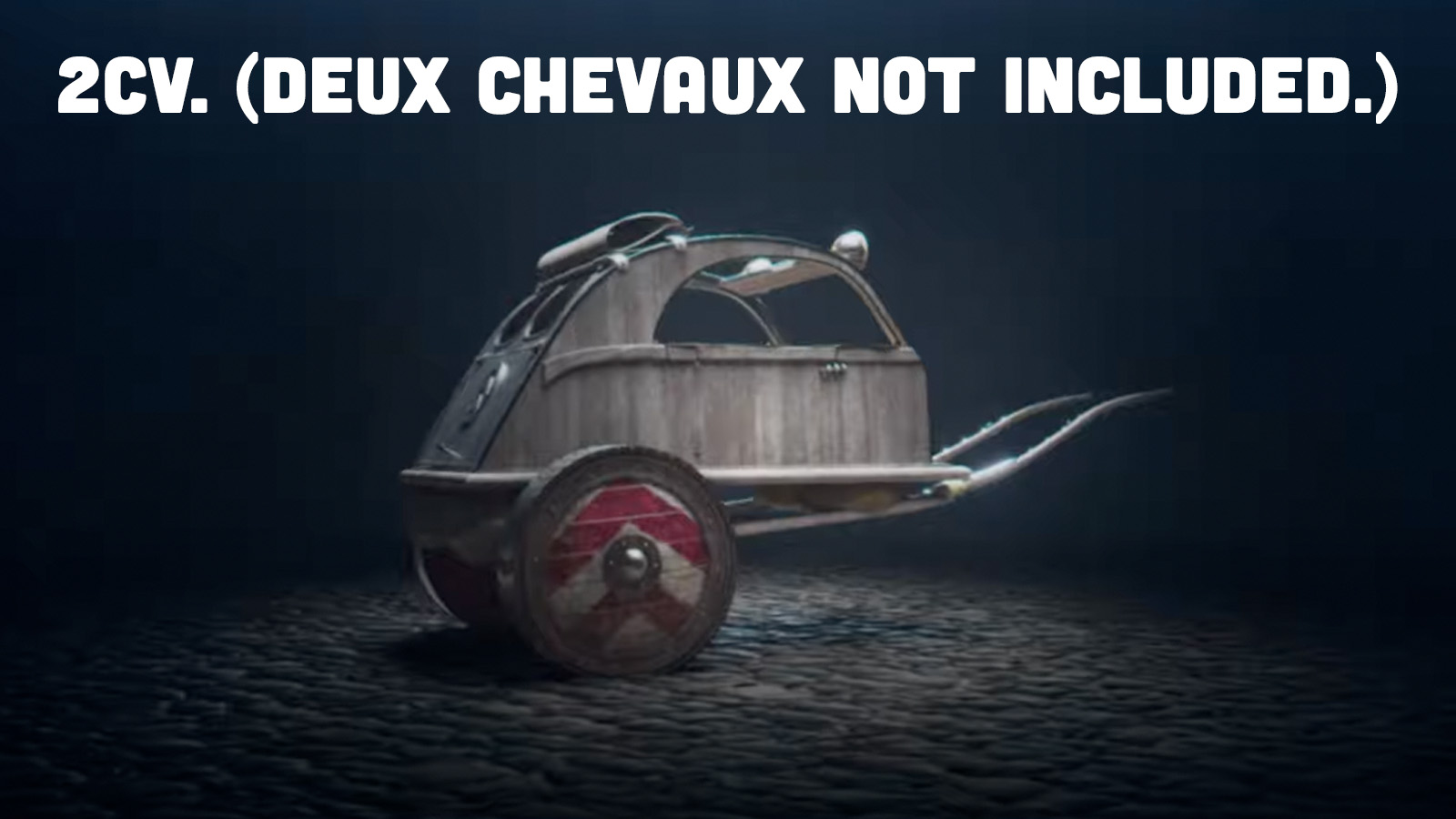 It’s pretty late in the year to be showing off concept cars, but Citroën isn’t in the business of playing by The Man’s stupid rules, so I can’t say I’m too surprised that the French brand is bucking trends and showing off a bold new concept. This one makes extensive use of recycled and sustainable materials, has zero tailpipe emissions, and appears to be a retro design inspired by the iconic 2CV. Plus, the lighting setup appears to reference one of my favorite stories from the development of the 2CV. Also, based on what I can gather from the short video of the concept car, it appears to be packing somewhere between zero and none horsepower. It may be worth mentioning that I think this is all for a movie, too.

If you’re a non-French speaker, like me and I’m assuming at least 10% of our readership, here’s what those callouts mean:

Okay, so by now I think we all understand that what Citroën is showing is something like a chariot. Well, it is a chariot, and keeping true to the 2CV’s nickname, the deux cheveaux, it’s capable of having up to two horsepower. The reason they’re showing a concept chariot made with Iron Age technology is because this is a tie-in with an upcoming movie — part of a series that’s not particularly well-known in America outside of the in-classroom libraries of middle school French classes: the Asterix and Obelix series. 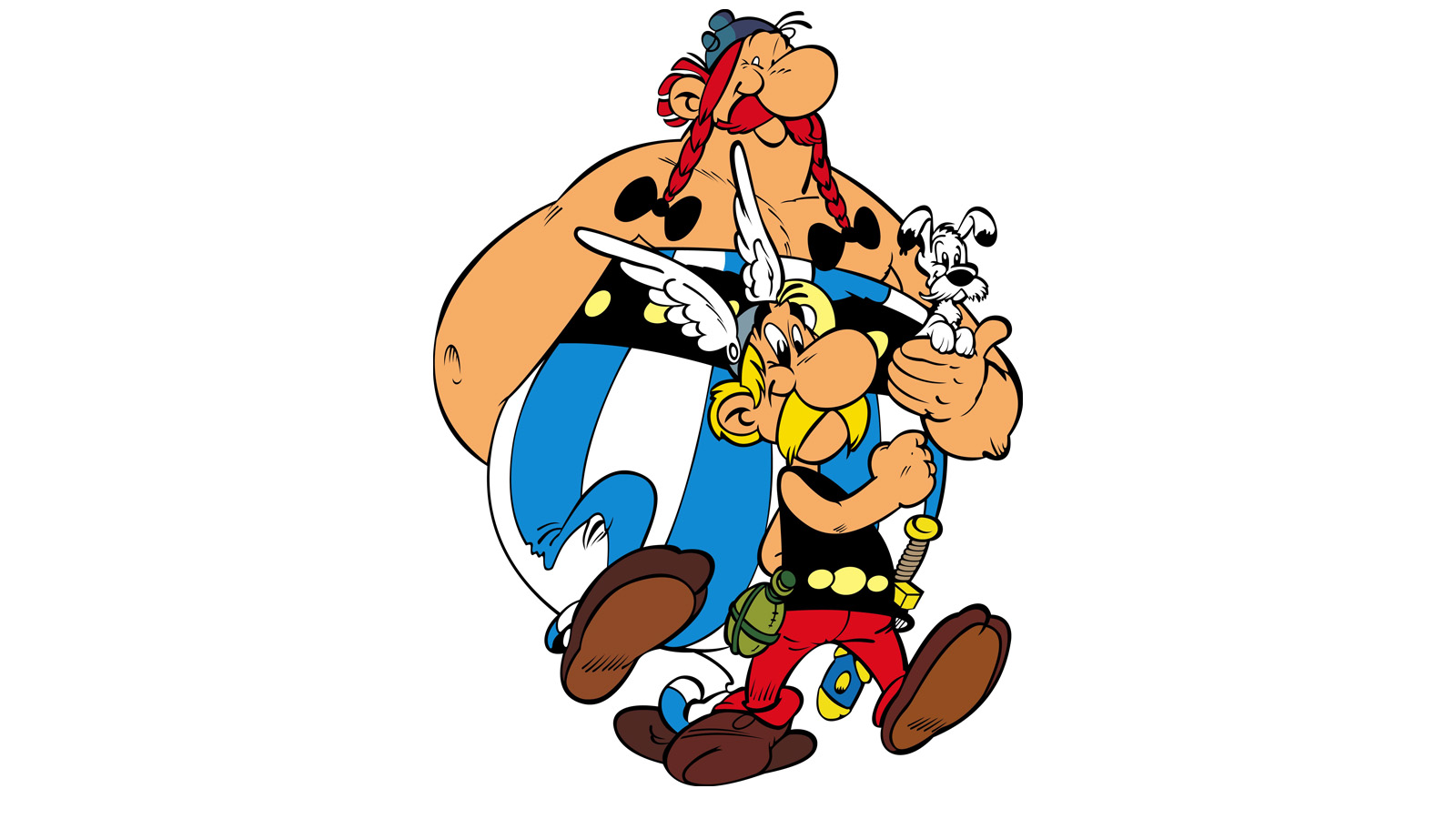 Asterix and Obelix is a cartoon series about ancient Gauls who do a lot of fighting the Roman Empire, and is very popular all over Europe. It’s been around since 1959, and I suppose if I had to come up with an American analogue, imagine if Mickey Mouse were all about colonial Americans fighting the British, and there were tons of movies and comics about that, all taking place in the mid-to-late 1700s. Really, I’m not sure we do have anything really analogous, but whatever — Europeans love the little winged-helmeted Gaul, and that’s good enough for me.

It seems the 2CV-inspired chariot will show up in the actual movie. Oh wait, want to see a trailer? I have one here somewhere… Oh yes, here:

Sadly, the 2CV chariot doesn’t appear in there, but Stellantis tells us in their press release it’s actually in the movie:

A lot of thought has gone into the creation of the concept chariot for this movie. There are several sequences where this is illustrated. The sequence where the heroes are about to leave their village to go to China shows a team which is united and heading off for a great adventure. Before they set off, Cétautomatix presents the chariot to Obelix and shows off the latest innovations which he brought to it so that their trip goes as smoothly as possible. Further in the movie, when Cesar’s army reaches China, there is a first advertising billboard at the entrance of the country promoting the best car at the time: the 2CV, an incredible chariot made in Gaul, pulled by 2 horses. This is a subtle allusion to the famous Citroën advertising film made on the Great Wall of China.

I just want to pause a moment here so it can sink in that Stellantis actually issued a press release for a fake 2CV-inspired chariot made for a movie about cartoon Gauls. There’s nothing about this I don’t like.

I think the “advertising film” referenced up there is this one from the ’80s, where a Citroën AX is driven over the Great Wall of China:

It seems 10 of these chariots, electric powered, were actually built for the film. It’s not clear if the boar’s stomach air-bag suspension performed as designed, but I do like that designers did at least consider Citroën’s long history with novel suspension setups. 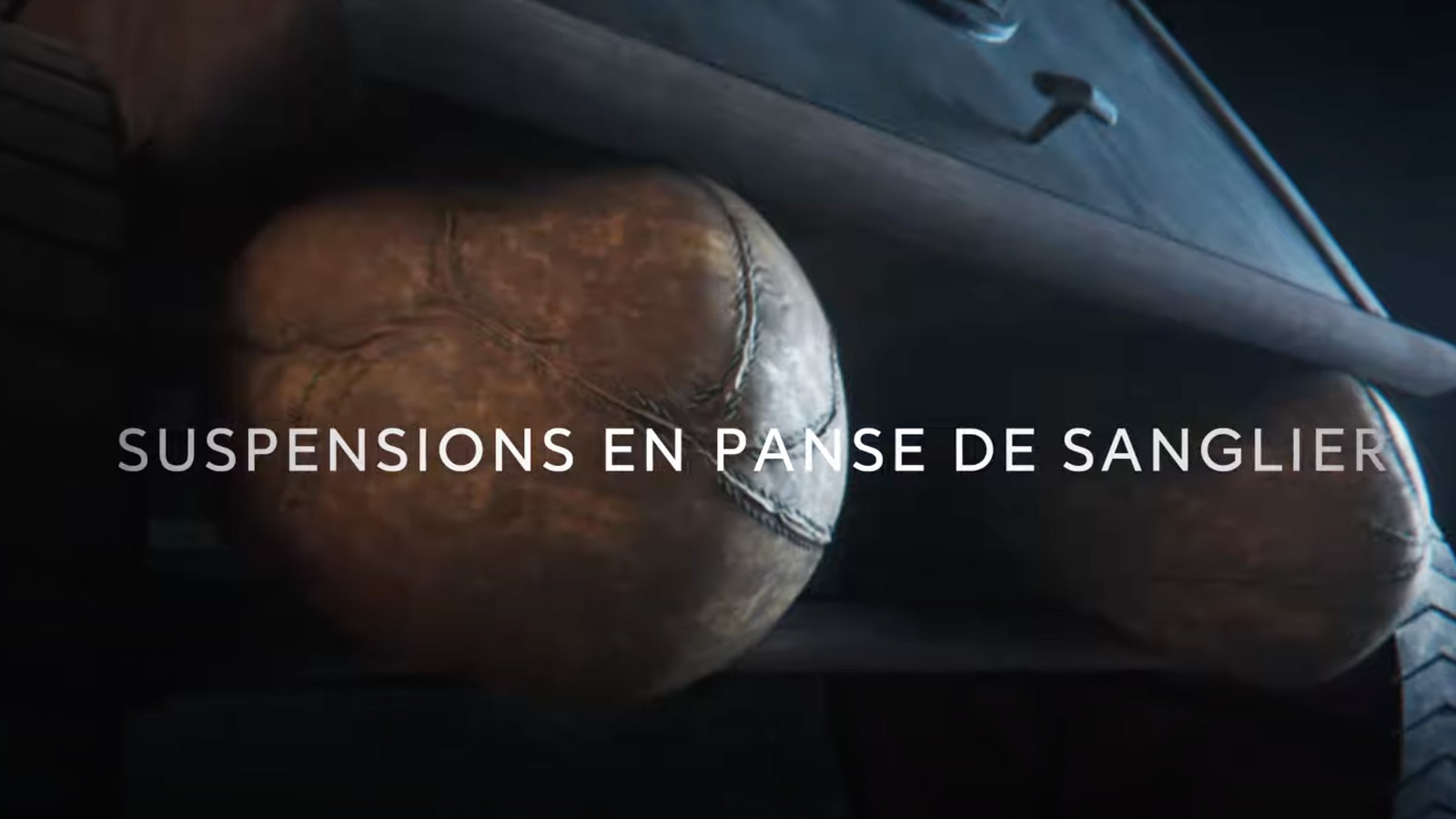 There’s also a little bit of an Easter Egg showing the herringbone gear pattern on the wheels that André Citroën used when he first went into business making gears: 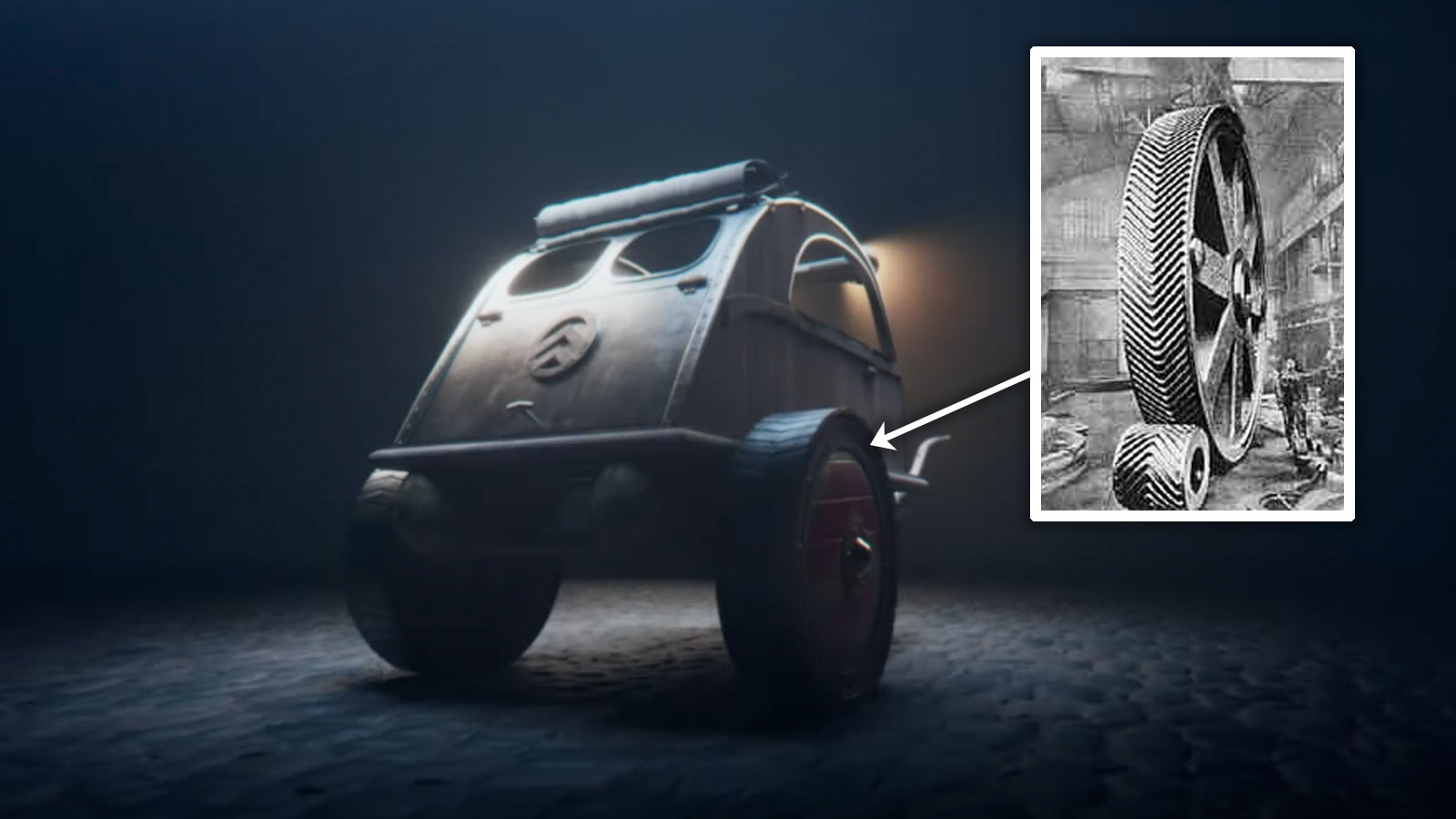 That pattern is also where the Citroën logo comes from.

I think the most interesting detail of the chariot concept, though, is the lights: 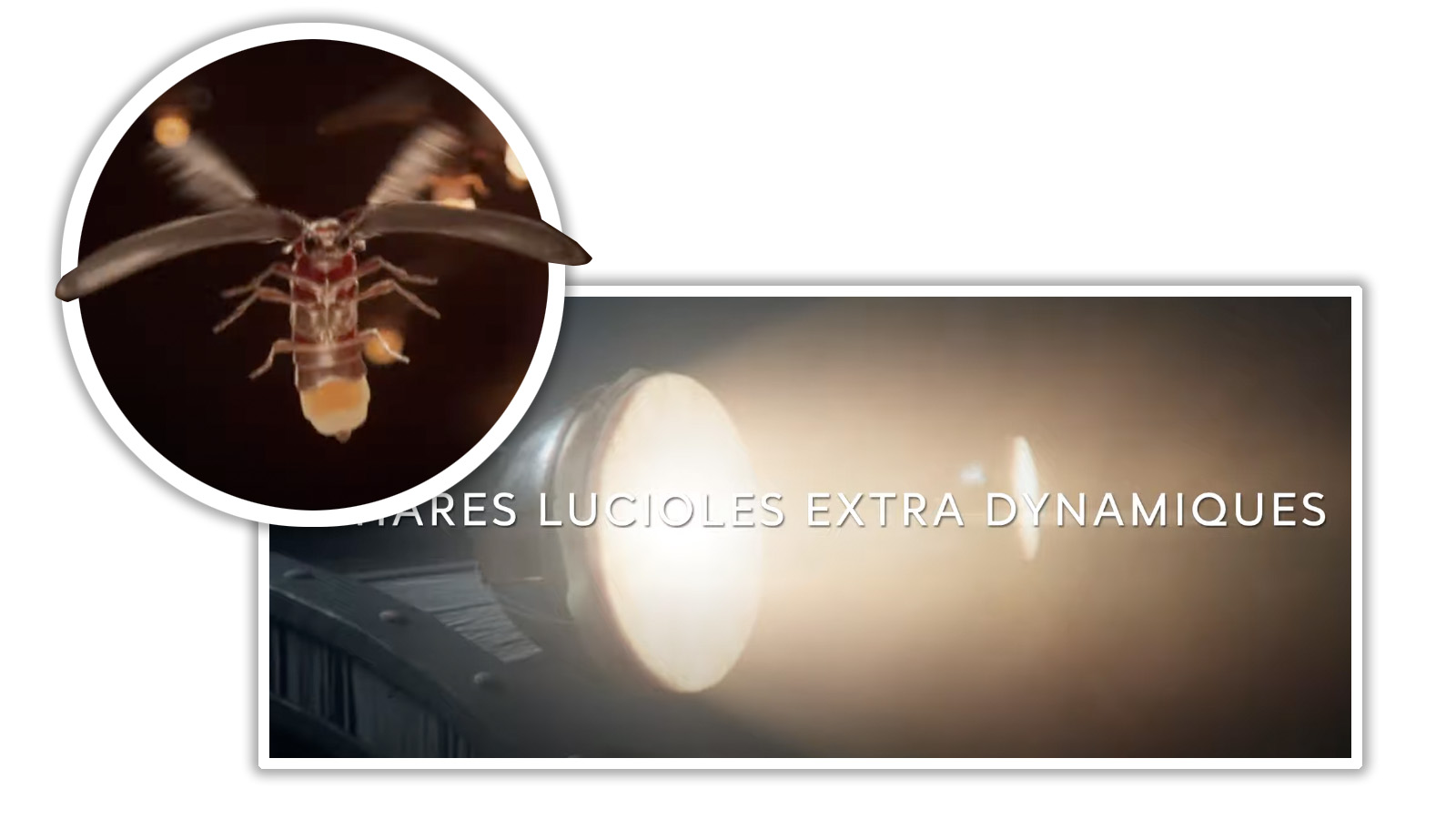 According to the Stellantis press release, they work via

“headlights, taken from Gallic helmets, operated by fireflies boosted with the magic potion”

…and the bonkers thing is that there is actually a historical Citroën precedent for this concept! I wrote about it months ago. Here’s a description of the firefly-lighting experiments being conducted on the TPV (the 2CV’s prototype development project):

For months, Pierre Boulanger tamed fireflies and lampyres to try to understand how they worked and see if it could be used on the TPV , instead of electricity . To balance the impulses of these brains, the laboratory, directed by Maurice Pompon, tests their findings and technical methods . Often Boulanger wants to find out for himself . He tries the models and with each evolution of the car, he wants to drive it in person. Thus are developed all sorts of surprising solutions : 1 oilcloth bodywork or even with phosphorescent wings.

Okay, maybe no magic potions involved beyond whatever Maurice Pompon kept in his flask, but Citroën once really did experiment with the use of fireflies for marker and running lamps for cars.

It’s also worth noting that I learned about the firefly-as-lights project from a French engineer I randomly met in Detroit and who had this information ready to go in case he ever met someone who would be interested. He definitely did. 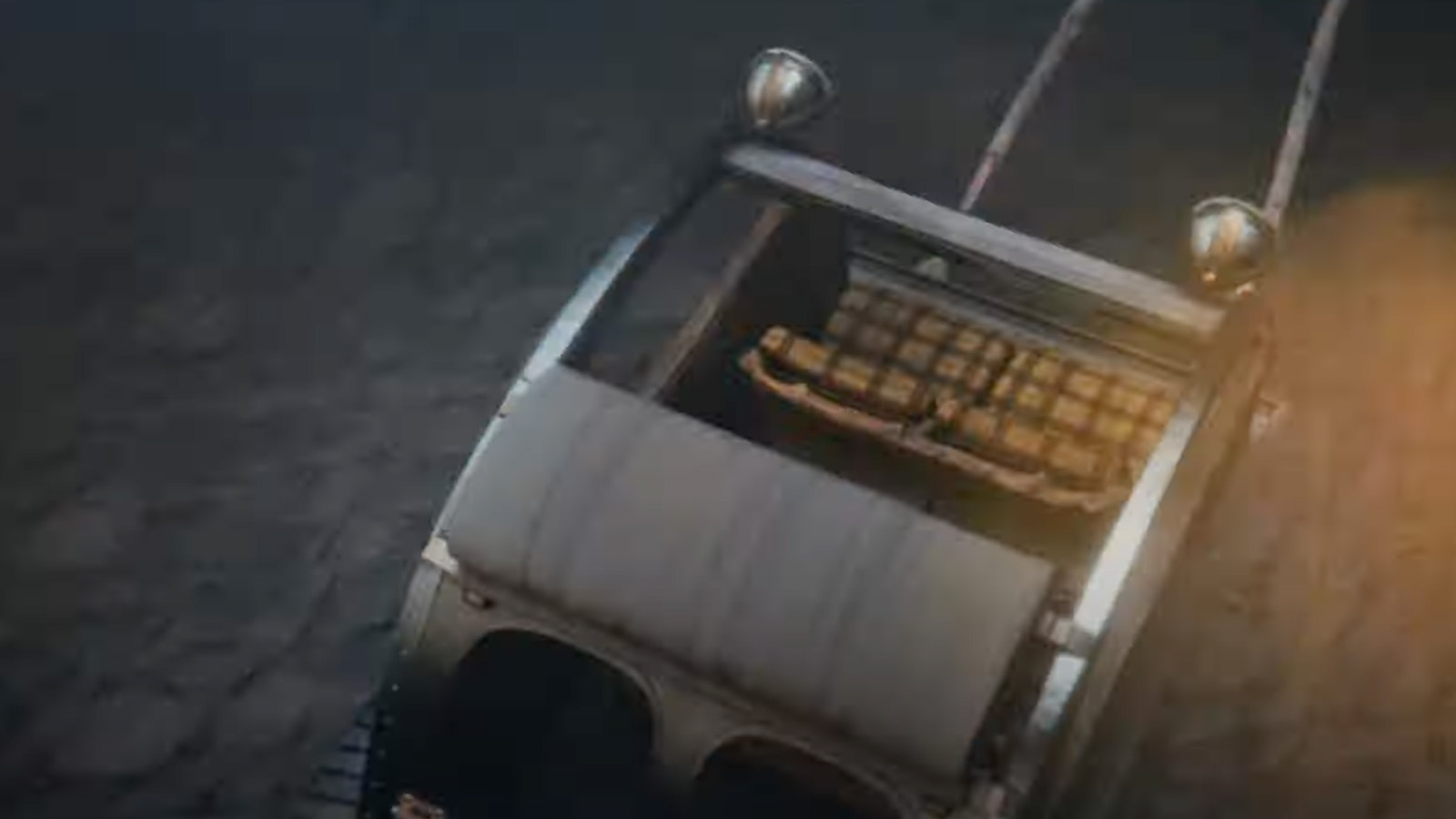 One last thought: can this be considered a retro design if it’s designed to appear in something that takes place centuries before the original source design? Conceptually, can this chariot be said to be a 2CV-inspired design if the 2CV wouldn’t be built until well over 1000 years later? Or is the 2CV inspired by an Iron Age chariot, in the Asterix Universe? It makes my brain hurt.

Anyway, glad to see Citroën still knows how to be weird.

I'm a co-founder of the Autopian, the site you're on RIGHT NOW! I'm here to talk to you about taillights until you cry and beg me to stop, which I absolutely will not. Sorry. Hug? Also, David's friend.
Read All My Posts »
PrevPreviousWatch Jay Leno Joke About Setting His Face On Fire In A Steam Car Accident
NextThe Highly-Underrated World Cup-Themed 1990 Fiat Panda Has The Greatest Hubcaps Ever And Also A BedNext