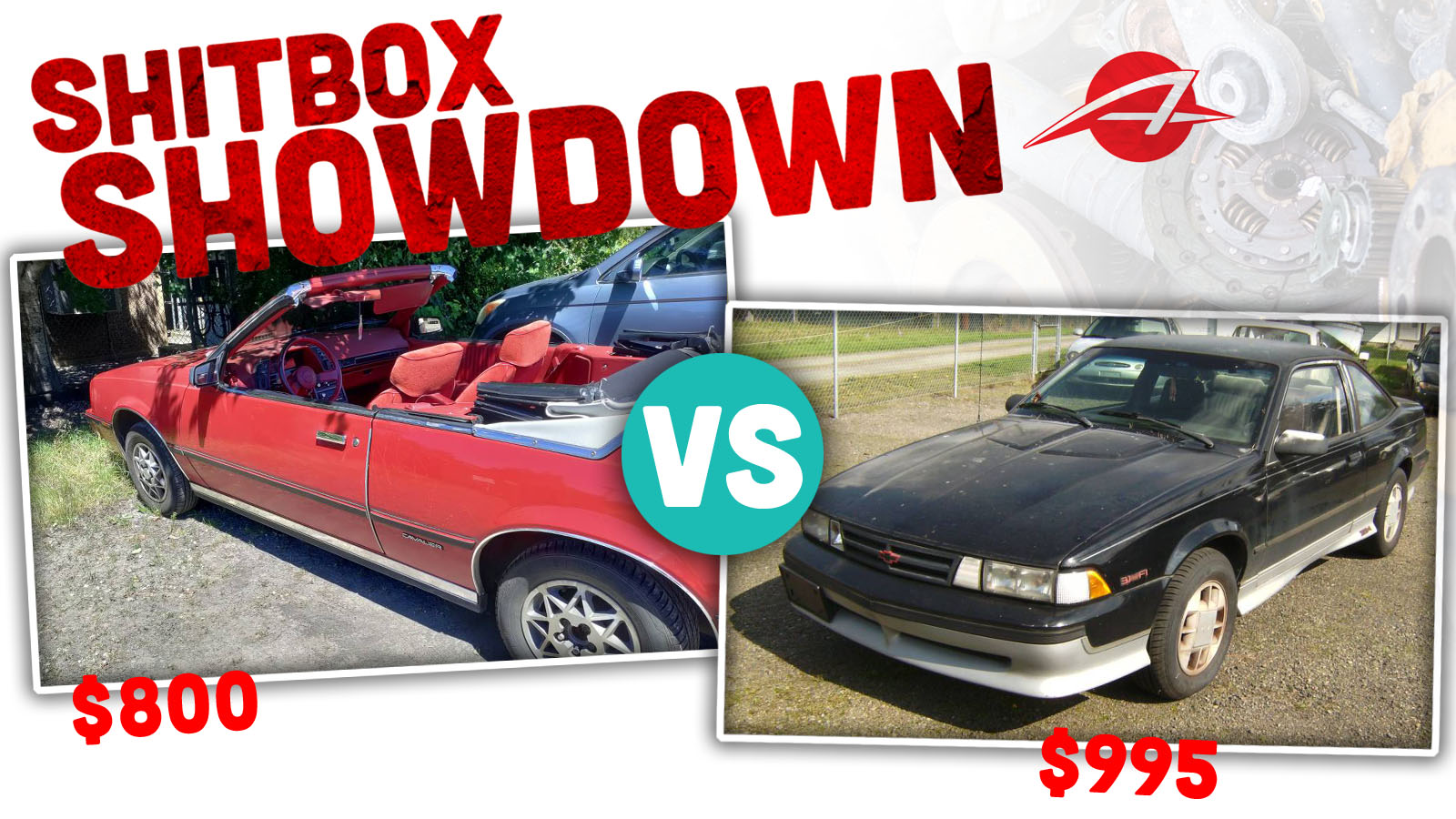 Welcome to another exciting week here on Shitbox Showdown! This week, we’re going to limit the purchase prices to three digits, and try our damnedest to find something cool that’s worth having. Will we succeed? You’ll just have to read on to find out.

Last Friday, we didn’t have a poll, but that doesn’t mean we don’t have results. The general consensus seems to be that the Grand Am would make the best daily driver out of the bunch, and I’m inclined to agree. But a lot of you want to attempt to track that Infinit convertible and set the Pinto ablaze, and to me that seems backwards. The Pinto is a blank slate, and there are just so many things you can turn it into. The Infiniti, while a fine second choice as daily driver, would be useless on the track, slow on a dragstrip, and probably too bendy for off-roading.

Anyway, let’s take a look at today’s competitors. I make no secret of my fondness for GM’s J-body cars, even though I’ve had mixed luck with them: I have a tale of woe and misadventure that I may tell someday involving two Cavaliers that rivals some of David’s exploits, but I’ve had plenty of good experiences with them as well. What’s less well-known is my love of history. The name “Cavalier” was first applied to mounted soldiers in support of King Charles I of England, who had a bit of trouble during his reign. (His son, Charles II, did a bit better after some trouble early on.) I have no idea why GM chose to name a compact car after these guys, but as the UK welcomes King Charles III, we here at Shitbox Showdown felt it was only fitting to honor him with a pair of Cavaliers.

Or maybe I just really like these crappy little things. Either way, here they are. 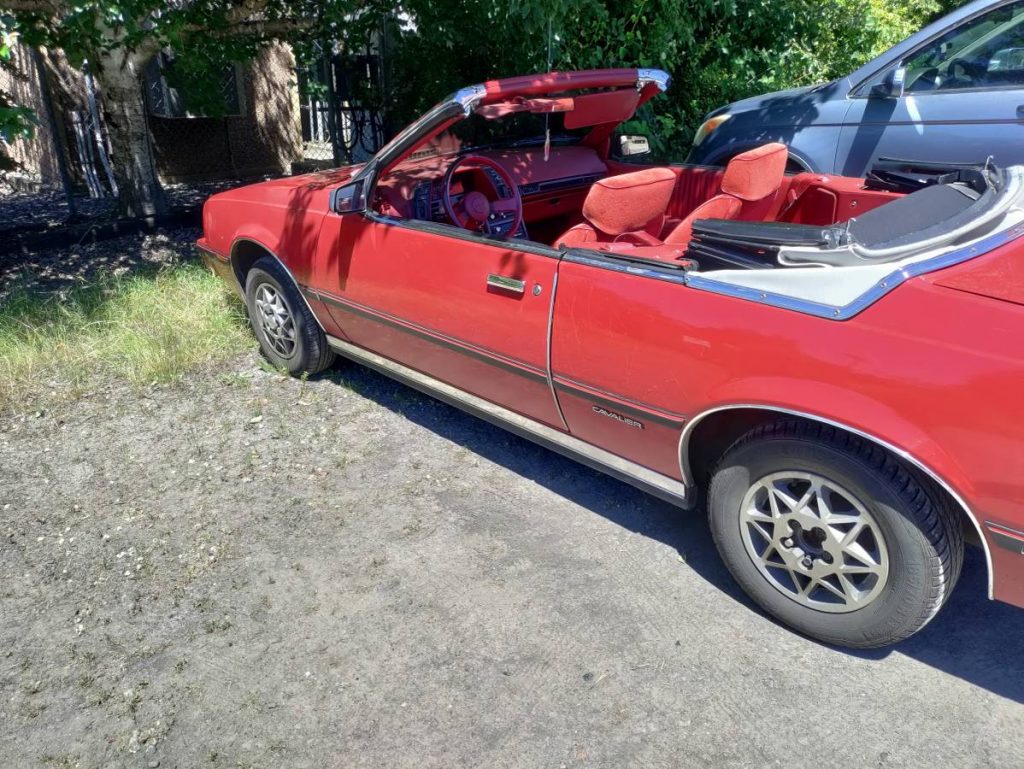 The first generation of Chevy’s Cavalier was available in four bodystyles: a four-door sedan, a four-door wagon, a two-door fastback hatchback, and a two-door coupe, which was really more of a two-door sedan, sharing the same squared-off roofline as the four-door. Starting in 1983, ASC beheaded a few two-door Cavaliers (and Pontiac Sunbirds) every year and turned them into convertibles, as a response to the newly-introduced Chrysler LeBaron and Dodge 400 convertibles. They were never as popular as Chrysler’s ragtops; this 1985 model is one of only 4,108 produced that year. 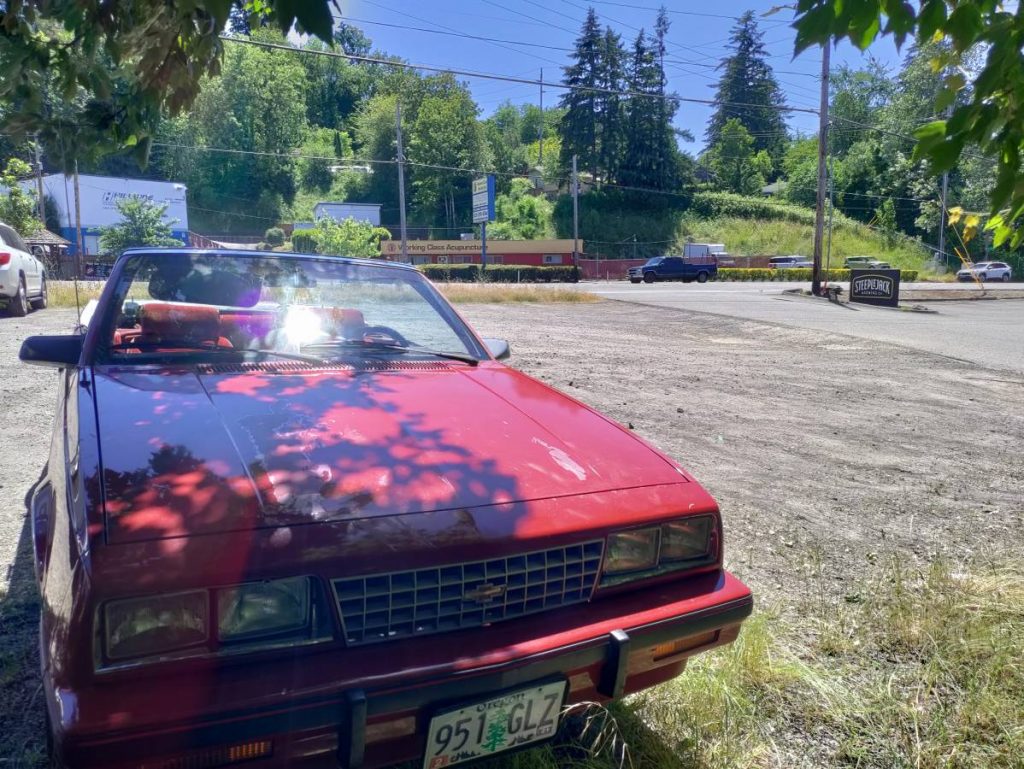 This Cavalier appears to be a Type 10 model, an appearance and option package available for a couple of years in the mid-1980s. Type 10 Cavaliers had a few more standard goodies and red side trim instead of chrome. Under the hood, it’s standard-issue J-car, with Chevrolet’s “122” overhead-valve four-cylinder, equipped with throttle-body fuel injection, sending power to the front wheels through a three-speed automatic. It’s nothing ground-breaking, but it gets the job done.

The seller doesn’t give us much to go on; all they say is that it has been sitting a while and has “issues.” It appears to have 2021 registration, so it hasn’t been sitting for too terribly long. They also only give us three lousy photos, but what they show is encouraging. Mechanically, these are simple and durable cars, and the top is shown both up and down, so evidently it works. For eight hundred bones, it seems worth a look, at least. 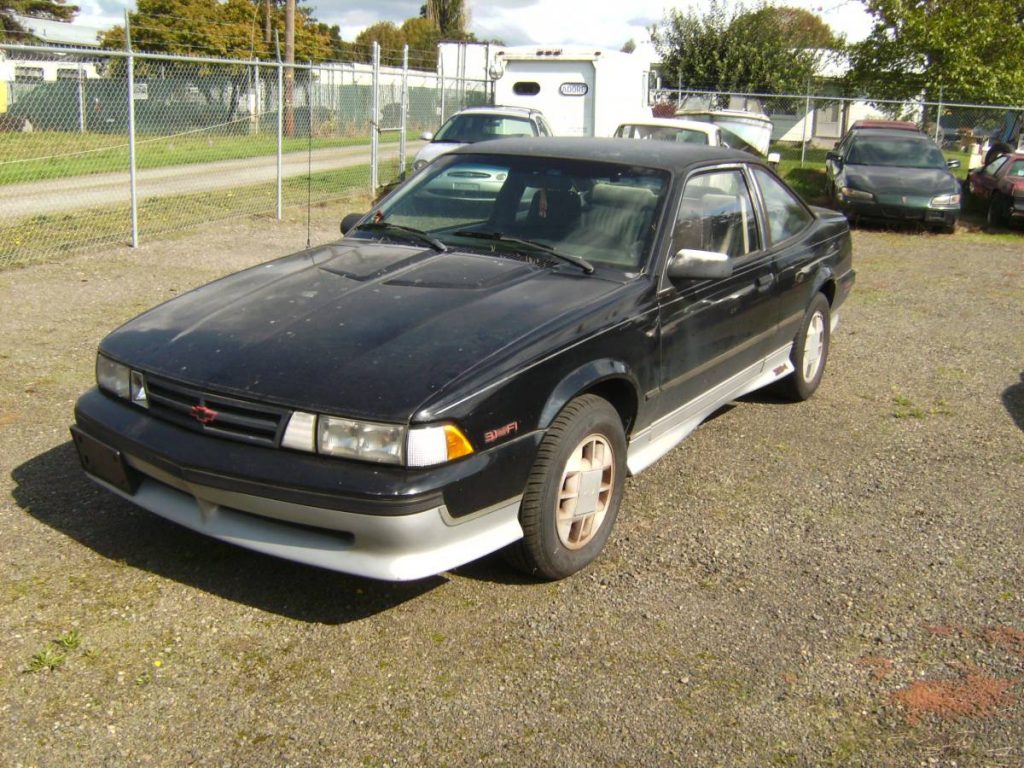 Runs/drives? Well, according to the seller

In 1988, Chevy redesigned the Cavalier and in the process dropped the hatchback. The 2 door received a new sleeker roofline, while the sedan and wagon carried over the square look. The top of the line was the “Z24” package, which included a V6 engine, some suspension tuning, a front spoiler and ground effects, and couple of “power bulges” in the hood. This one sends the V6’s power through a five-speed manual to the front pair of those wonderful checkerboard-looking alloy wheels. 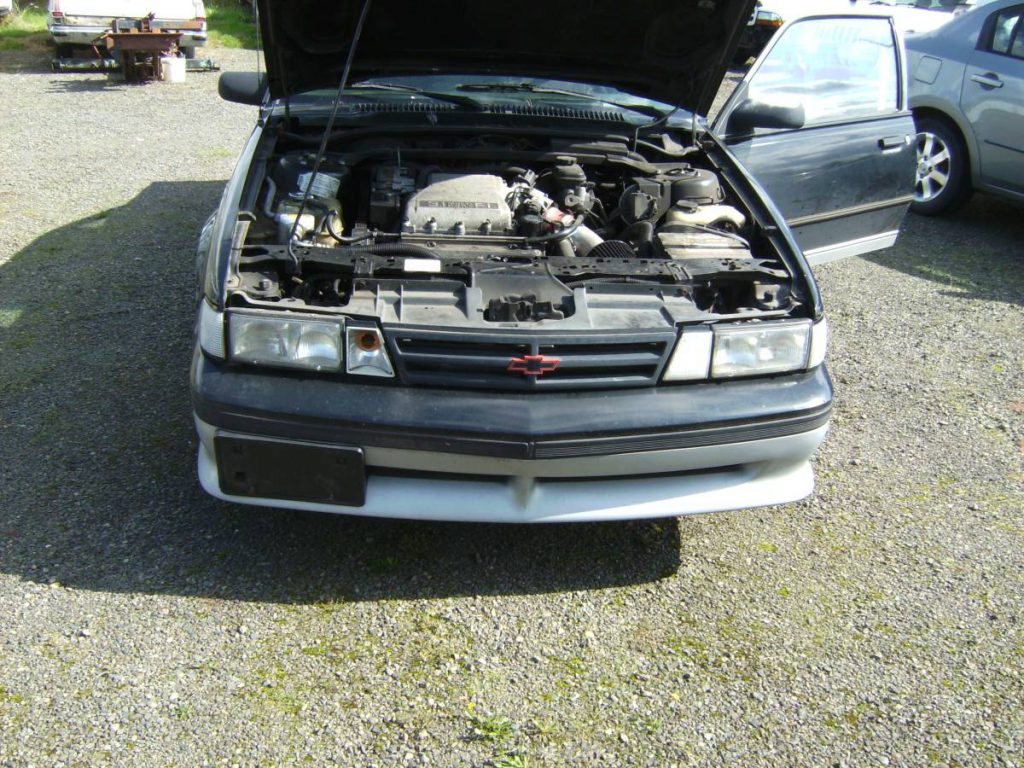 This car has a ton of miles on it, a little over a quarter million, but the seller says it still runs and drives well. I have seen this car for sale on Craigslist for a long time, years maybe, so it may have some issues now from sitting. The ad does say its registration is two years out of date, so we know it has been sitting at least that long. I believe the two reasons it has been for sale so long are the mileage, and this: 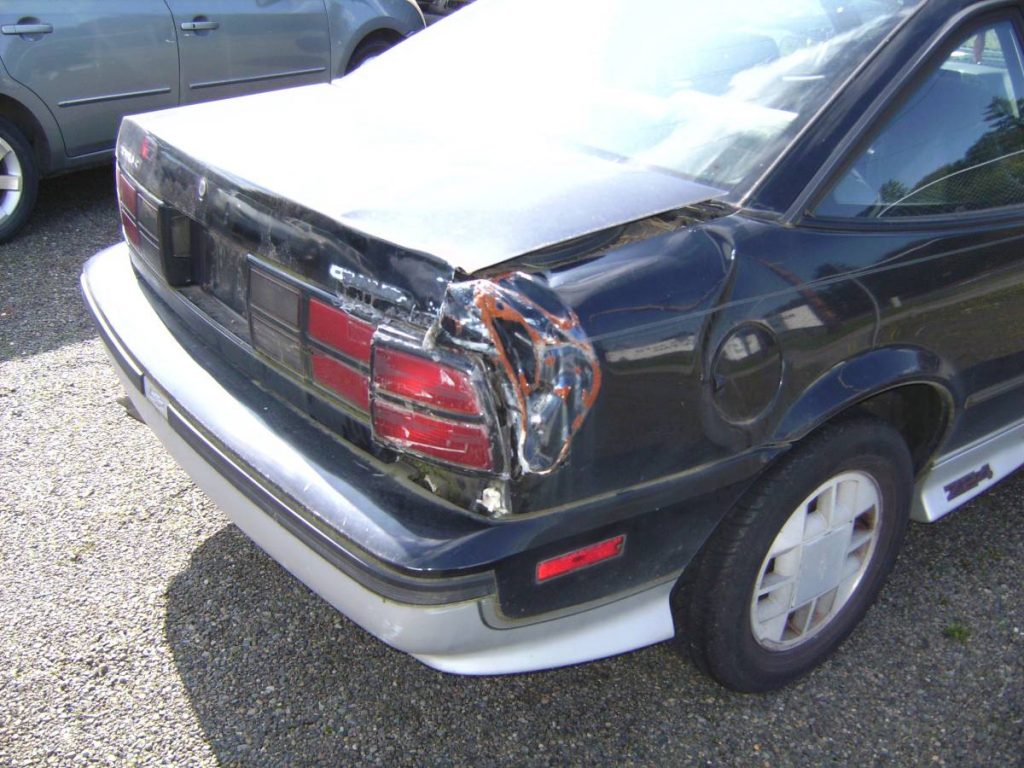 Ouch. I’m certain that trunk lid doesn’t seal properly any more, and it may not even open. At least it didn’t break the rear window. Someone stuck a replacement taillight in place of what I’m sure was a smashed one and taped it in place. It works, but it ain’t pretty. And it’s not really fixable either. 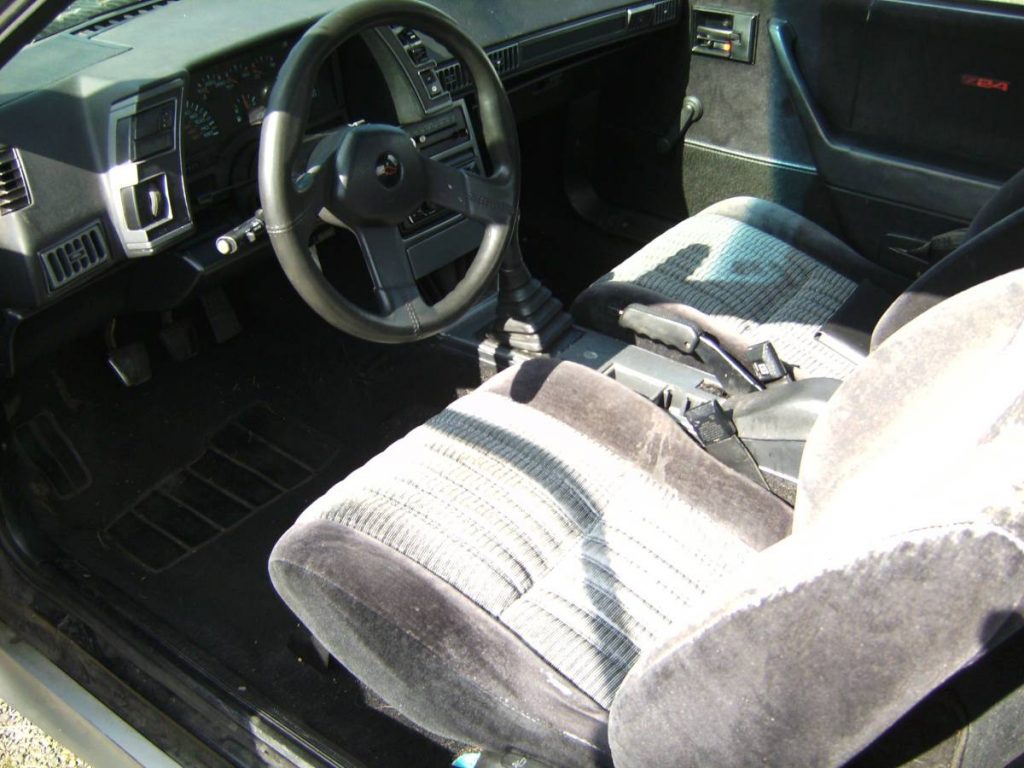 It’s a shame, because the rest of the car looks passable, especially for less than a grand. It still might make someone a good beater, but it’ll never be “nice.” It’s just not worth the effort and cost to make it so. But since it has been available for so long, if you’re willing to put up with the damage, you could probably show them $500 cash and drive off with it.

Love ’em or hate ’em, GM’s J-cars are likely to be a fixture in the cheap used car market for quite some time to come, despite having been out of production for seventeen years now. They make good beaters, and the end of their useful lives has a long tail. These two are at the bottom end of the price spectrum, and neither is perfect, but both are at least interesting. Which one is more your speed?

Pacific Northwest-based self-taught DIYer of all the things. Current fleet: 1971 MGB GT, 1989 Chevy K1500, 2013 Chrysler 300C, 2003 Infiniti QX4, and 1966 Aristocrat Land Commander trailer. Not to mention about 40 RC cars and around 100 model kits...
Read All My Posts »
PrevPreviousHere’s What A ‘Shed Skid’ Is And Why Australians Do Something This Ridiculous
NextThe Daydreaming Designer Shows How To Make A Budget Tiny House From A Broken RVNext