Who doesn’t like a quirked-up cab-over truck? Just a few days ago, EarthCruiser unveiled a four-door version of its CORE commercial vehicle that seems to roll many things that we love into one vehicle. Going off-road, cab-over trucks, proper four-wheel-drive systems, weird commercial vehicles, all that awesome stuff. Let’s dive into this unusual off-roader to see exactly what makes it so cool.

You might be wondering why we’re covering this random commercial vehicle. Well, mostly because it’s cool. Hands up, how many of us played with Tonka trucks as a kid? While an enormous commercial dump truck is another level of impractical, there’s still something cool about a tall, fit-for-purpose commercial vehicle that delights the little bit of childishness inside every vehicle enthusiast. Okay, maybe it’s more than just a little bit of childishness, since we never really grew out of playing with cars.

If you’re not familiar with EarthCruiser, it’s a small Oregon-based company that builds some of the coolest high-dollar overlanding rigs around. From unique four-wheel-drive systems to RV-style interiors, EarthCruiser does everything necessary to make its rigs turn-key alternatives to chalets, cabins, and the like. In addition to overlanding rigs, EarthCruiser builds commercial vehicles for proper rough-and-tumble use. 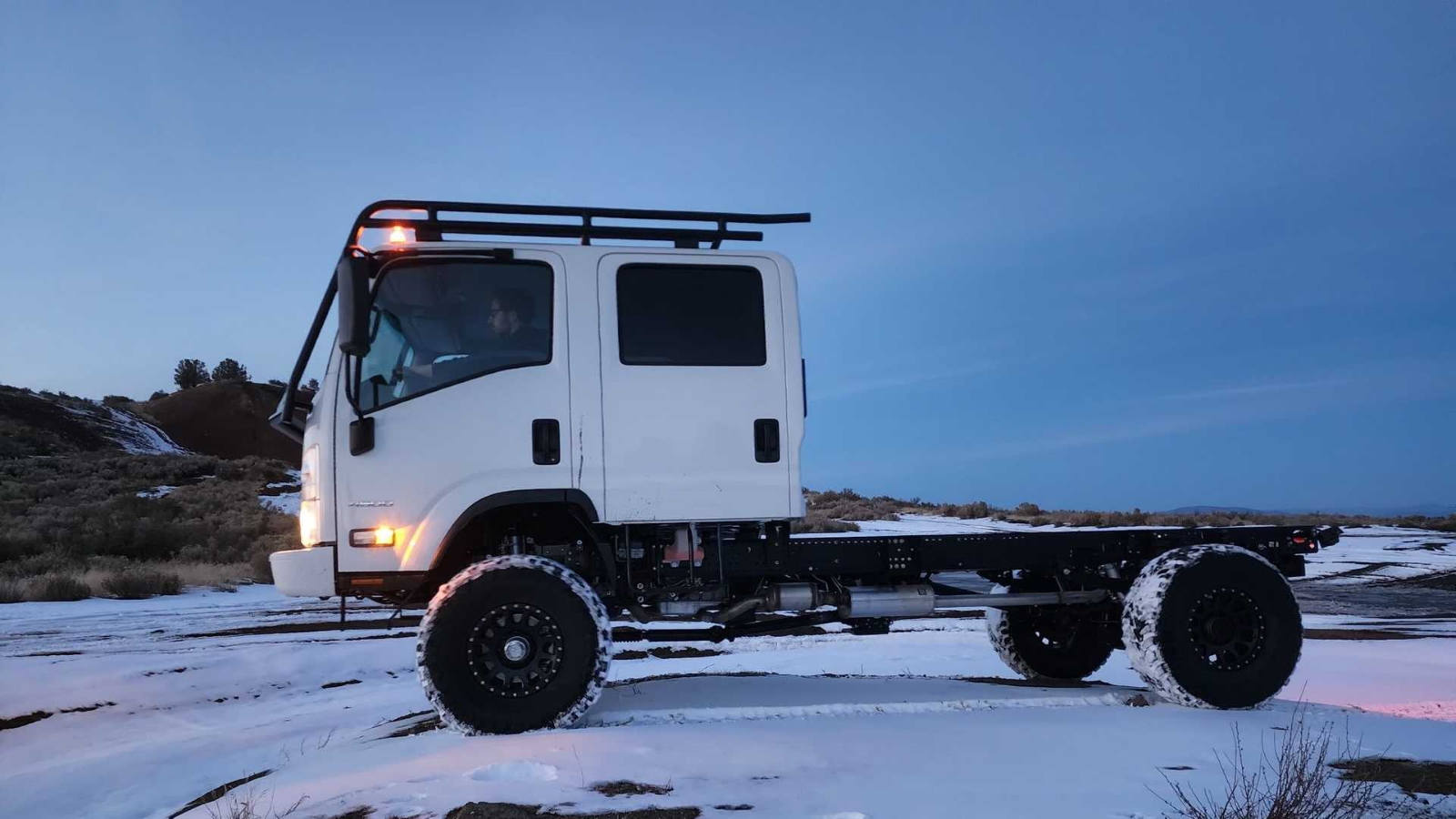 Based on the Isuzu NPR, the EarthCruiser CORE Dual-Cab Chassis looks to be everything you need to start a big off-road build. While 350 horsepower may sound a bit low for a 6.6-liter V8, the Core cranks out a strong 425 lb-ft of torque and puts it through a six-speed automatic gearbox. From there, torque can be split through a two-speed transfer case to both axles, both the front and rear differentials are of a locking design, and the front hubs are manually-locking. Of course, tires are the real points of traction, so EarthCruiser has equipped this thing with massive 37-inch E-rated mud terrains on 17-inch wheels to offer plenty of sidewall.

As articulation is the name of the game when it comes to getting over really uneven terrain, the CORE gets solid axles front and rear with unique leaf springs and dampers. While EarthCruiser doesn’t list ground clearance on this thing, it looks pretty damn good. The cab-over form should also help with approach angle as the front overhang is short and the bumper is way up in the air. 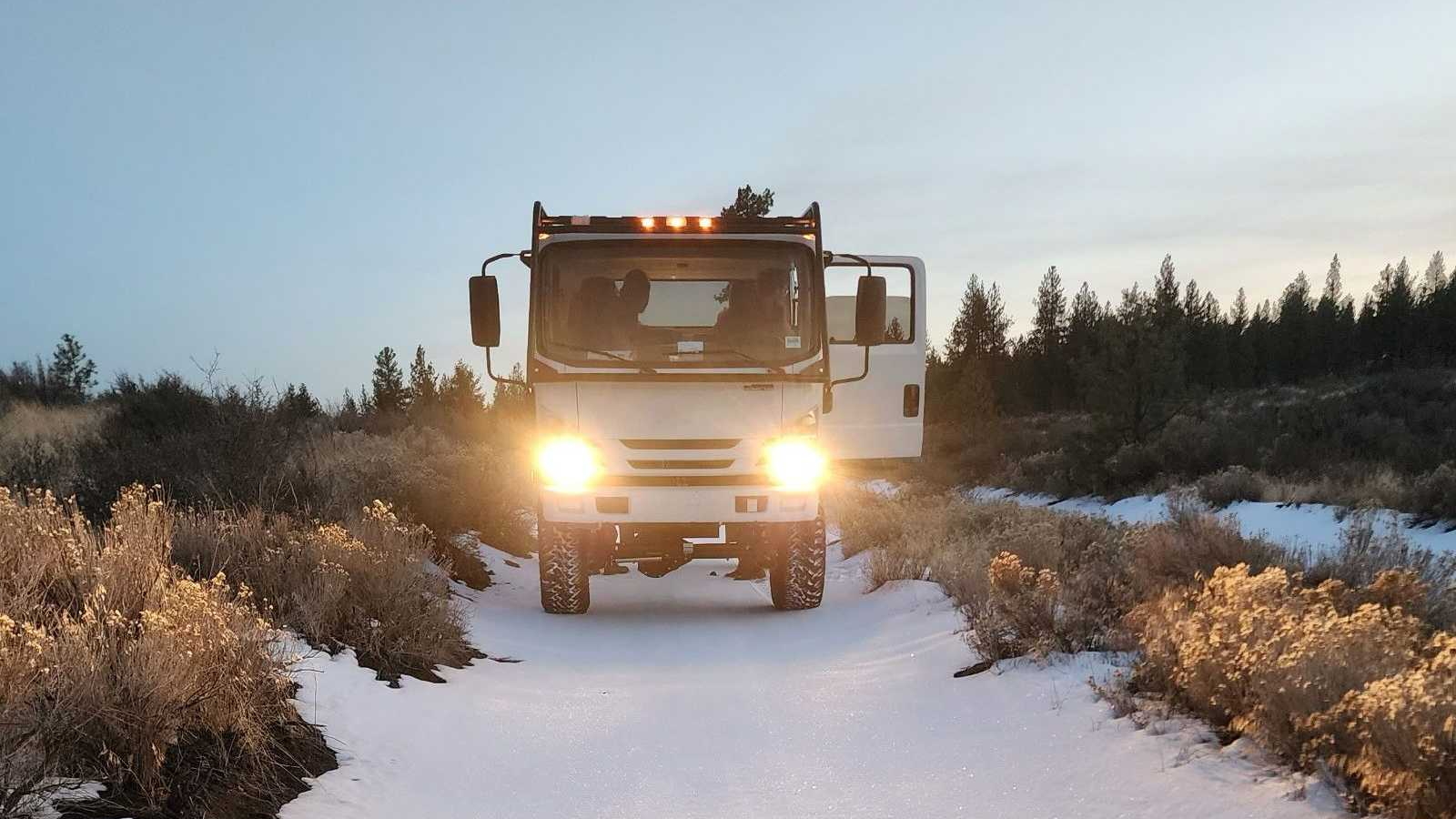 Despite looking formidable in press photos, the CORE Dual-Cab Chassis isn’t that massive compared to a half-ton pickup truck. Figure a width of 81 inches, or roughly an inch wider than a standard Ford F-150. However, width isn’t everything as the CORE Dual Cab is a long vehicle on a long wheelbase. EarthCruiser figures 241.5 inches in length excluding the rear bumper and a wheelbase of 150 inches. While that surely isn’t the best thing in the world for breakover angle, it does allow for 88 inches of room behind the cab to mount whatever you might want.

Granted, EarthCruiser doesn’t aim for the CORE Dual-Cab Chassis to be a mass-market vehicle. It’s a commercial rig through and through, with focus on remote operations from UAV deployment and recovery to wildland firefighting. Still, wouldn’t this make for a sweet mobile concert rig? Imagine a fold-down stage on the back with a sound system and lighting that could all be powered by the combustion engine. Sure, it probably wouldn’t fit every member of Broken Social Scene, but such a platform might be big enough for a DJ or two. Alternatively, you could build your own overlanding rig on the back of the CORE Dual Cab, something that’s a bit more specialized than the pre-built Dual-Cab overlanding RVs offered by EarthCruiser. Plus, think of all the friends you can bring along for the ride. 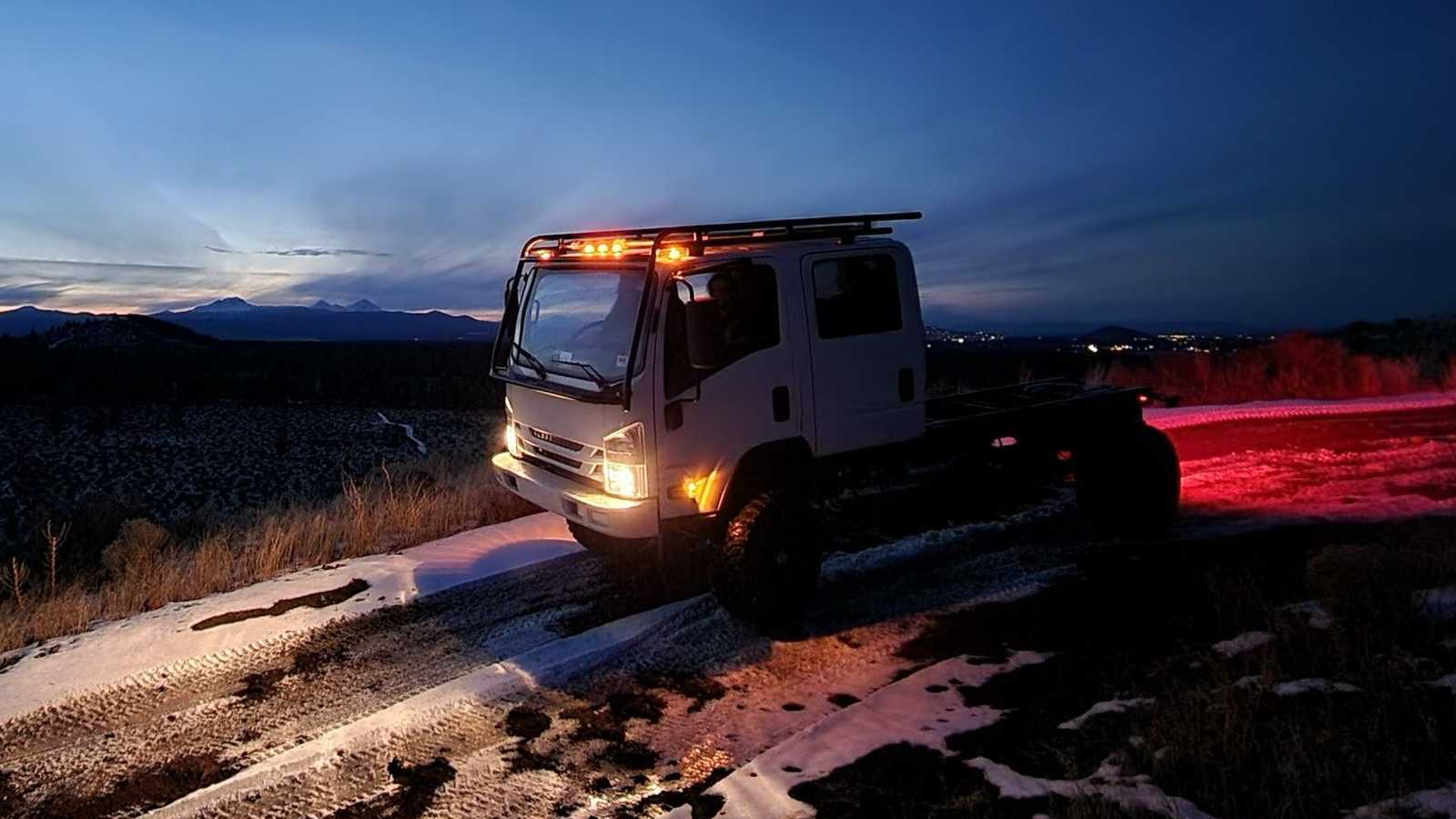 Pricing hasn’t been announced for the EarthCruiser CORE Dual Cab, but don’t expect it to be cheap. The standard two-door version starts at $105,000, which is proper luxury car money. Remember, the whole process for this thing is to buy a brand new Isuzu NPR and re-do almost everything that isn’t body or emissions-related. Still, we love a good cab-over truck, even if it’s pricey.

All photos courtesy of EarthCruiser