Last month, I detailed the incredible water damage that has sidelined a 2007 Thor Adirondack 31BH travel trailer that my family has owned since 2016. Things looked grim after years of water getting through a bad seal in the roof, with floors so broken that you could fall through and walls so rotted that you could easily peel them away. Replacing every damaged part would have cost at least $25,000, but the dealership figured out a way to get the job done for just $7,800. Here’s the clever way an RV dealer fixed our travel trailer’s damage.

As I explained in my last entry on the condition of this trailer, when my family travels, we take a travel trailer with us and stay at a campground rather than in a hotel. Our road trips have taken us just about everywhere from Sandusky, Ohio to Orlando, Florida and various other spots around America. We love being able to bring a piece of home with us, and honestly? I’d take just about any campground over most hotels. You can’t beat the magic of grilling and a campfire while the sun sets. Or in some situations, perhaps jets tearing through the sky above your head.

Somehow, despite having two large travel trailers, my family hasn’t gone camping this year. And I’ve only slept in the back of my Volkswagen Touareg or in a tent. During the summer, I explained how my parents bought a new Heartland Mallard M33 fresh off of the lot. But we haven’t been able to take it anywhere yet because every time we try to, something major has broken. 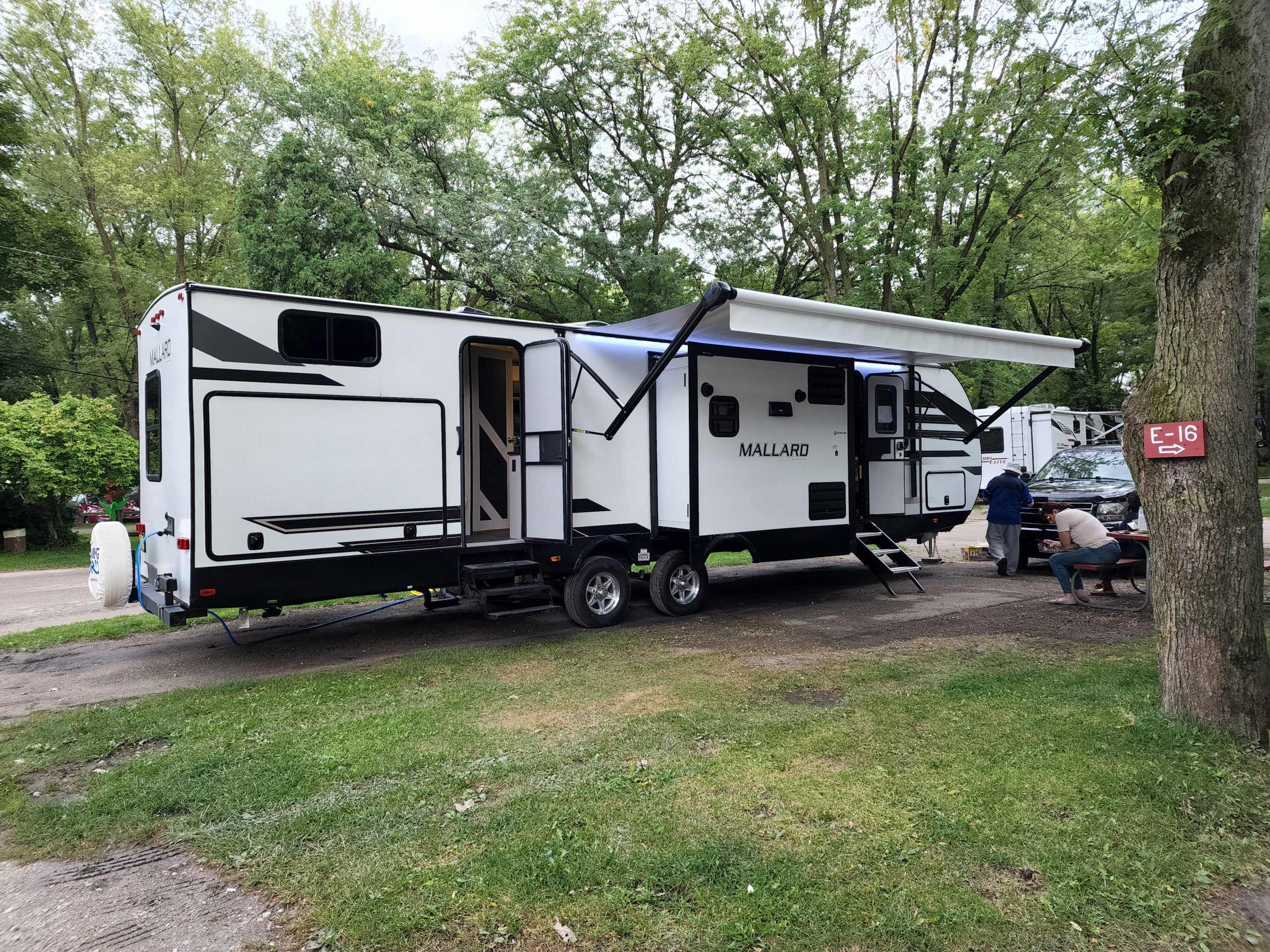 Most recently, on an attempted test run, the water heater sprung a huge leak. Due to parts shortages, the camper spent the entire season broken, waiting for parts.

That led my parents to consider the trailer that the Mallard was supposed to replace, a 2007 Thor Adirondack 31BH. It’s a towable that weighs in at 6,256 pounds and is about 36 feet-long. To correct my previous entry about this trailer, I found the sales documents for it. My parents actually paid $9,000 for it. From what I can tell, they were confusing the price paid for the trailer with the price that they paid for a used Ford Expedition.

When my parents picked the trailer up in 2016 I immediately noticed the telltale signs of water damage: bubbling exterior skin.

The Water Damage Was Bad 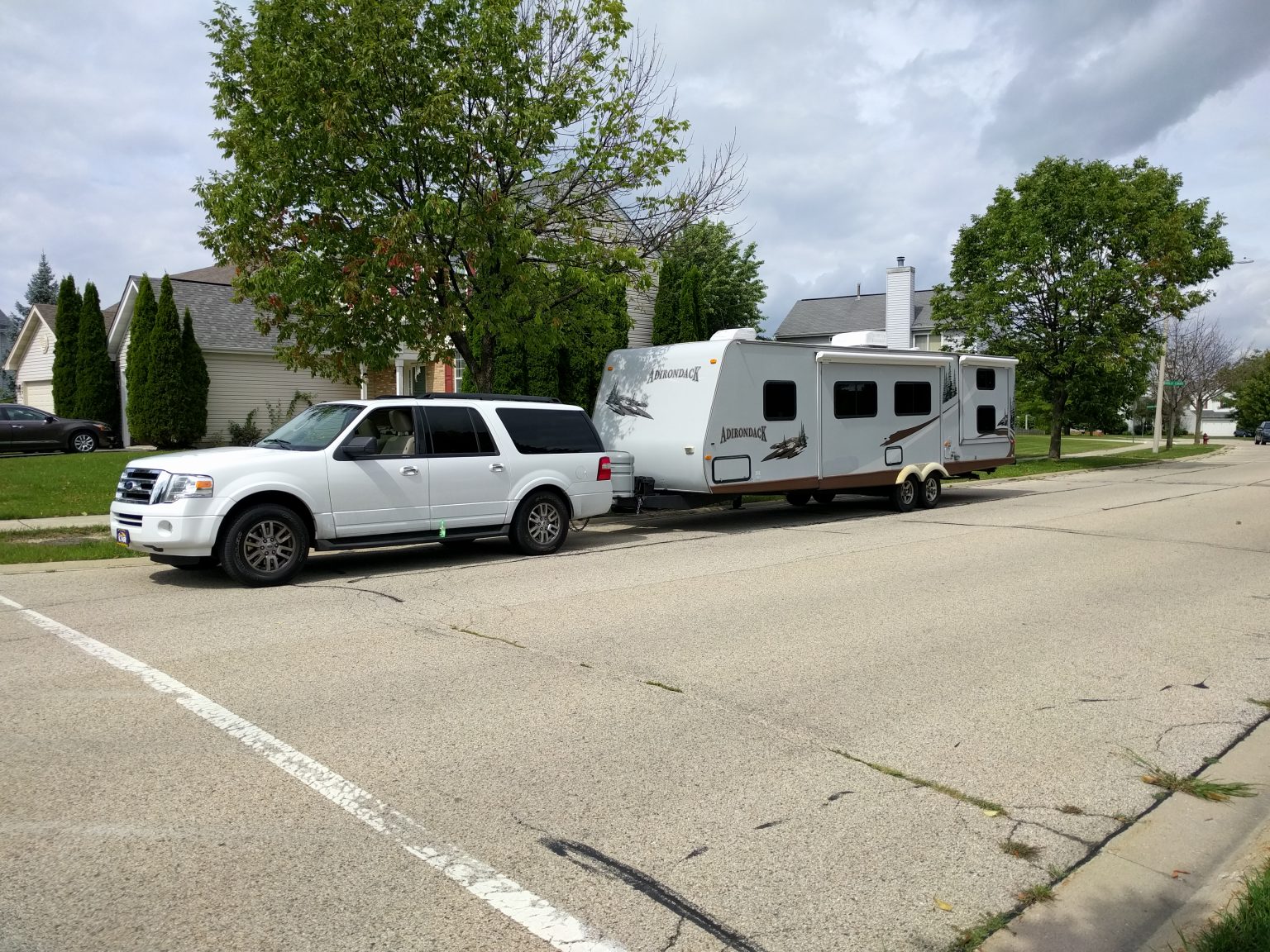 For a quick review, travel trailer walls are typically built with a vacuum-bonded sandwich of materials. The exterior siding is fiberglass. It’s sandwiched together with two layers of wood and styrofoam, with the interior wall serving as the other side. Those layers of wood often consist of thin lauan, a tropical plywood product also called luan.

Things were fine for a few years, as the floor towards the rear seemed a little soft, but still solid. And the bubbling on the outside was not too bad. The dealership that sold us the camper (a different dealer than the one that did the repairs) said the bubbling was normal, and nothing to worry about. Well, as my parents learned the hard way, bubbling is definitely something that you do not want to ignore. 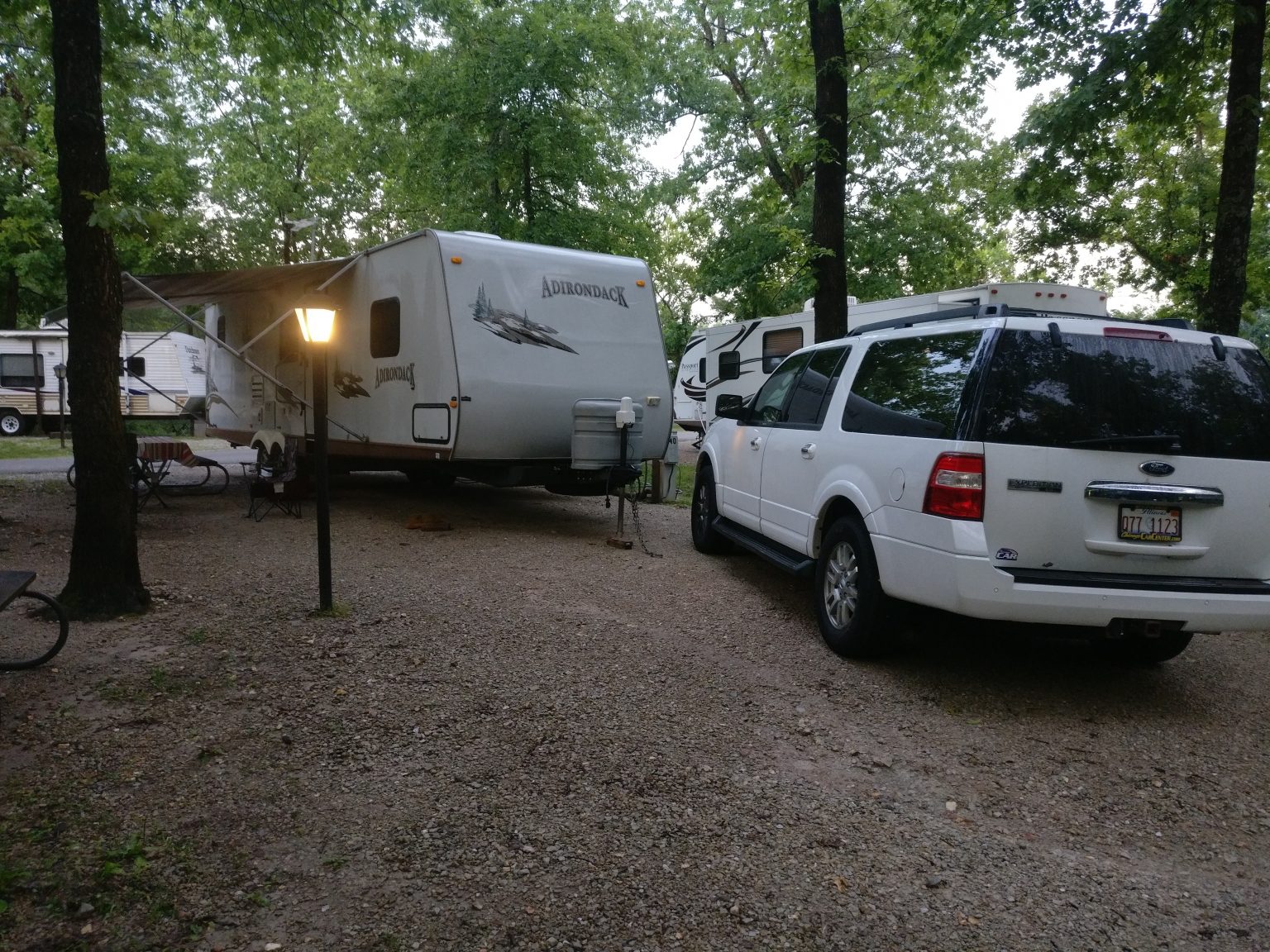 The bubbles increased in size and the floor got just a little bit softer. Then, in 2020, I walked into the camper and felt the floor crack beneath my feet. And on the outside, it looked like the bathroom unit had been in a fender bender. We realized that things got much worse.

My parents sat on the trailer, not knowing what to do. This year, they decided to just bite the bullet and get it fixed. Two more years of water leaks did some heavy damage, resulting in the skin literally peeling off of the trailer and the floors splintering. 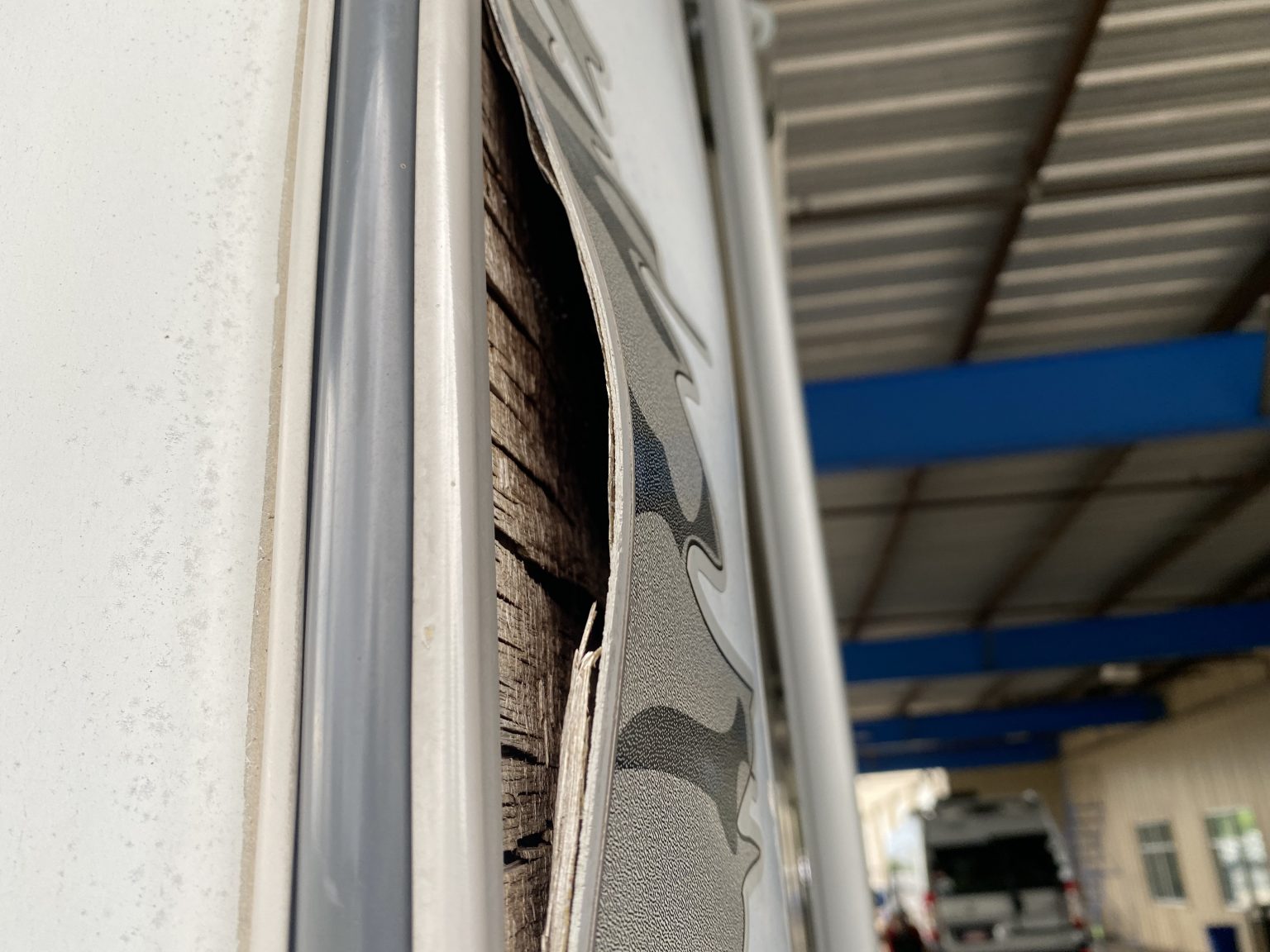 As the dealership explained to me, water damage occurs from seam seals failing or from other forms of damage that exposes the luan to the elements. The damage happens slowly, first with saturation and cracks in the luan that are behind the fiberglass siding, and thus you can’t see. Then, over time, delamination occurs. As the materials deteriorate, they separate, leading to the bubbles. The dealership further explained that once you see the delamination, you’re witnessing damage that has been occurring for months, if not years.

However, the dealership told me that not all delamination is the result of water damage. Some delamination occurs simply because the luan sandwich begins failing due to defects or wear. 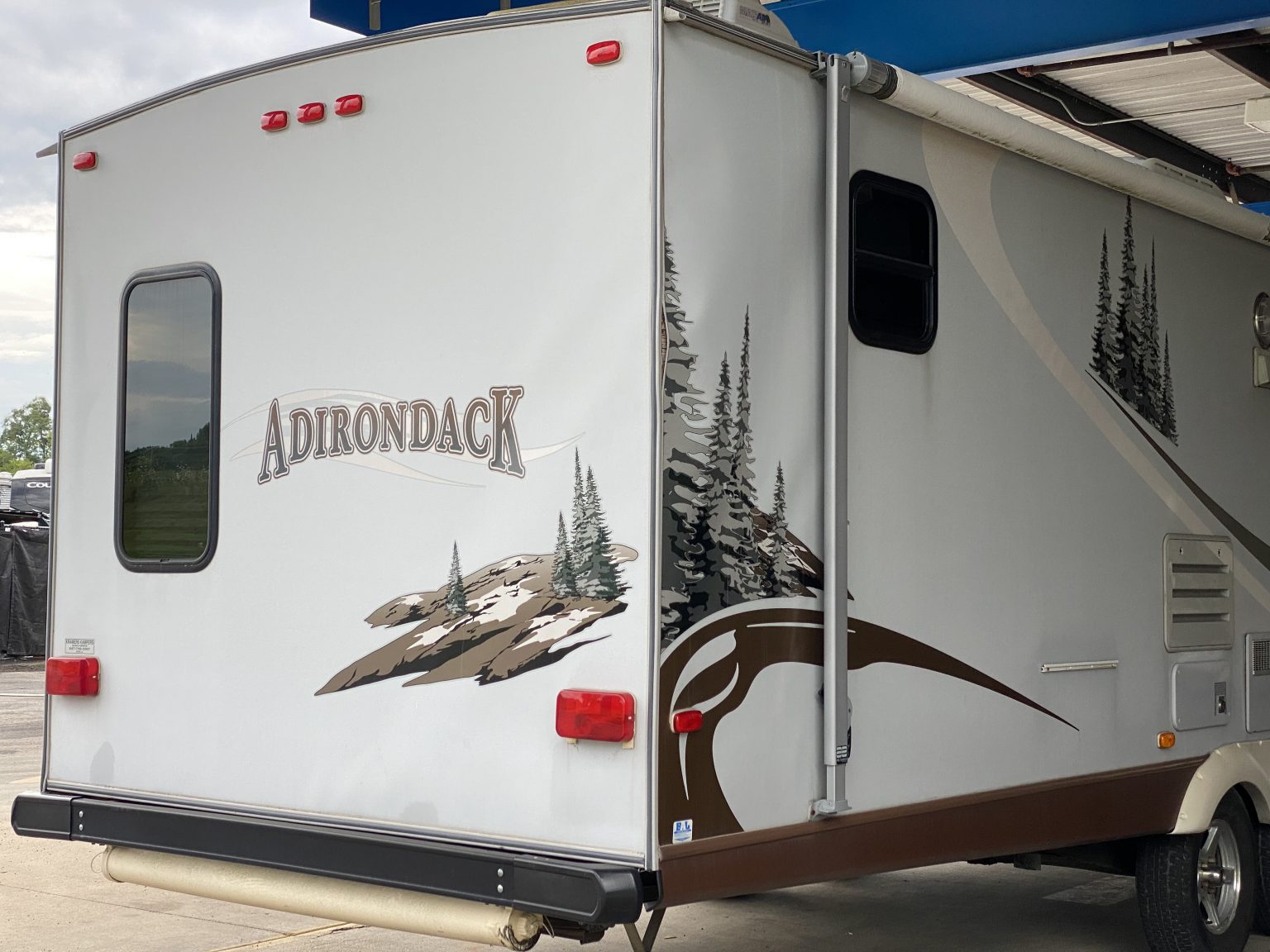 How The Dealer Fixed It

The camper has been in the RV operating room for a few months and we learned a lot. Technicians from the dealership found the source of the leak to be the plastic skylight above the shower. The skylight provides some light, but also just a few more inches of headroom for tall people. Unfortunately, the seals around the skylight apparently failed years ago. So every time it rained, water leaked through the skylight and into the surrounding luan walls and the floor. Rinse and repeat for years, and while the bathroom looked fine, behind the scenes everything was getting wrecked. 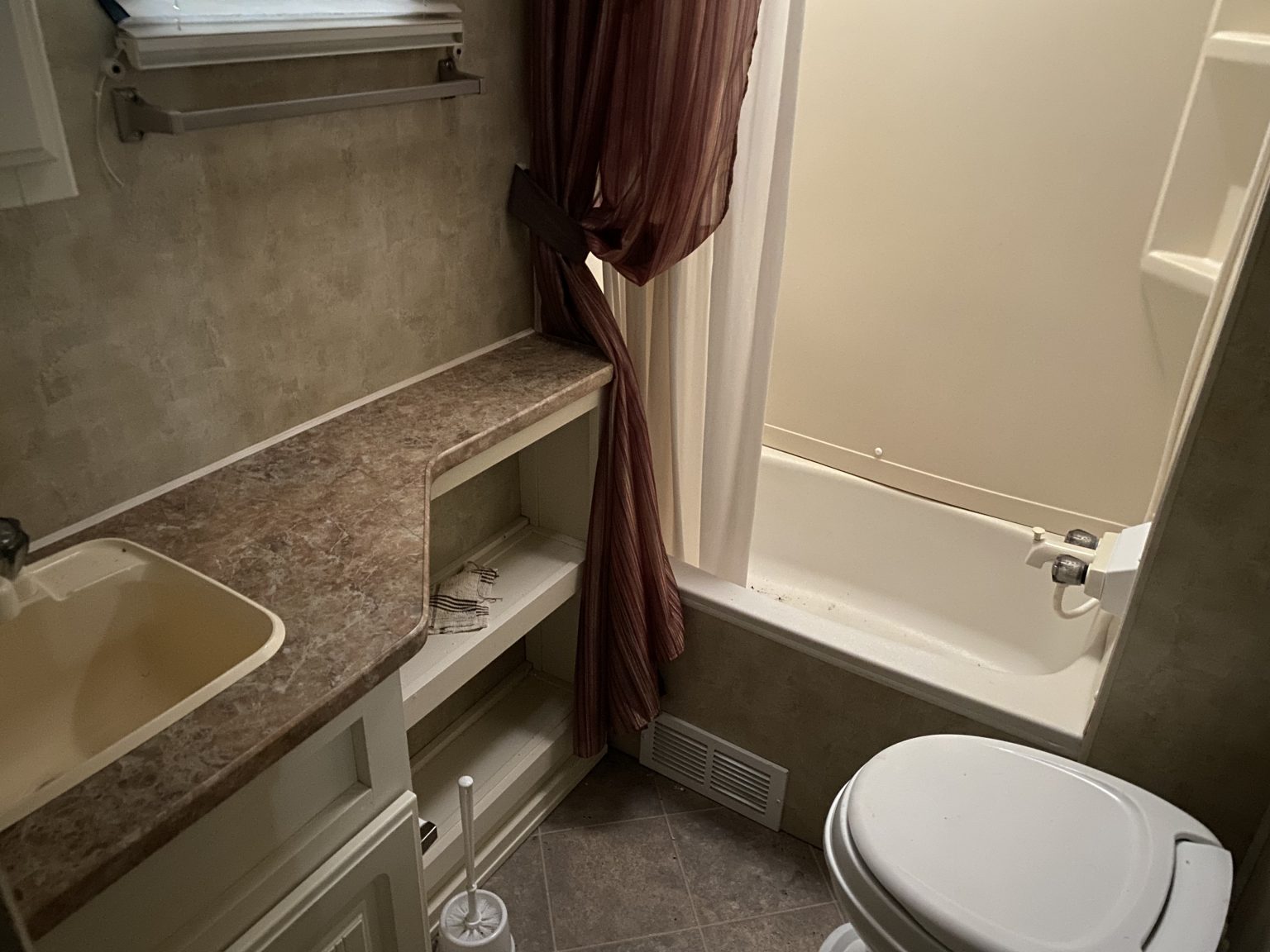 Thankfully, the technician believes that we dodged a bullet with the front of the trailer. From their inspection, they found that the outer fiberglass siding had delaminated, but the remaining layers underneath were undamaged. This, they think, was likely a manufacturing defect, not water damage. My parents asked how much all of this would cost to fix, and they were given a couple of choices.

To completely fix the damage in the rear, the dealership said that it would have to pull up the entire rear floor section. This would require the rear section of the trailer to be torn down, then rebuilt. And fixing the wall would require tearing down the wall and rebuilding that, as well. The estimate for that restoration was $25,000, and didn’t include any curveballs that might be thrown during the process, such as additional damage. And that number did not include redoing the front wall. 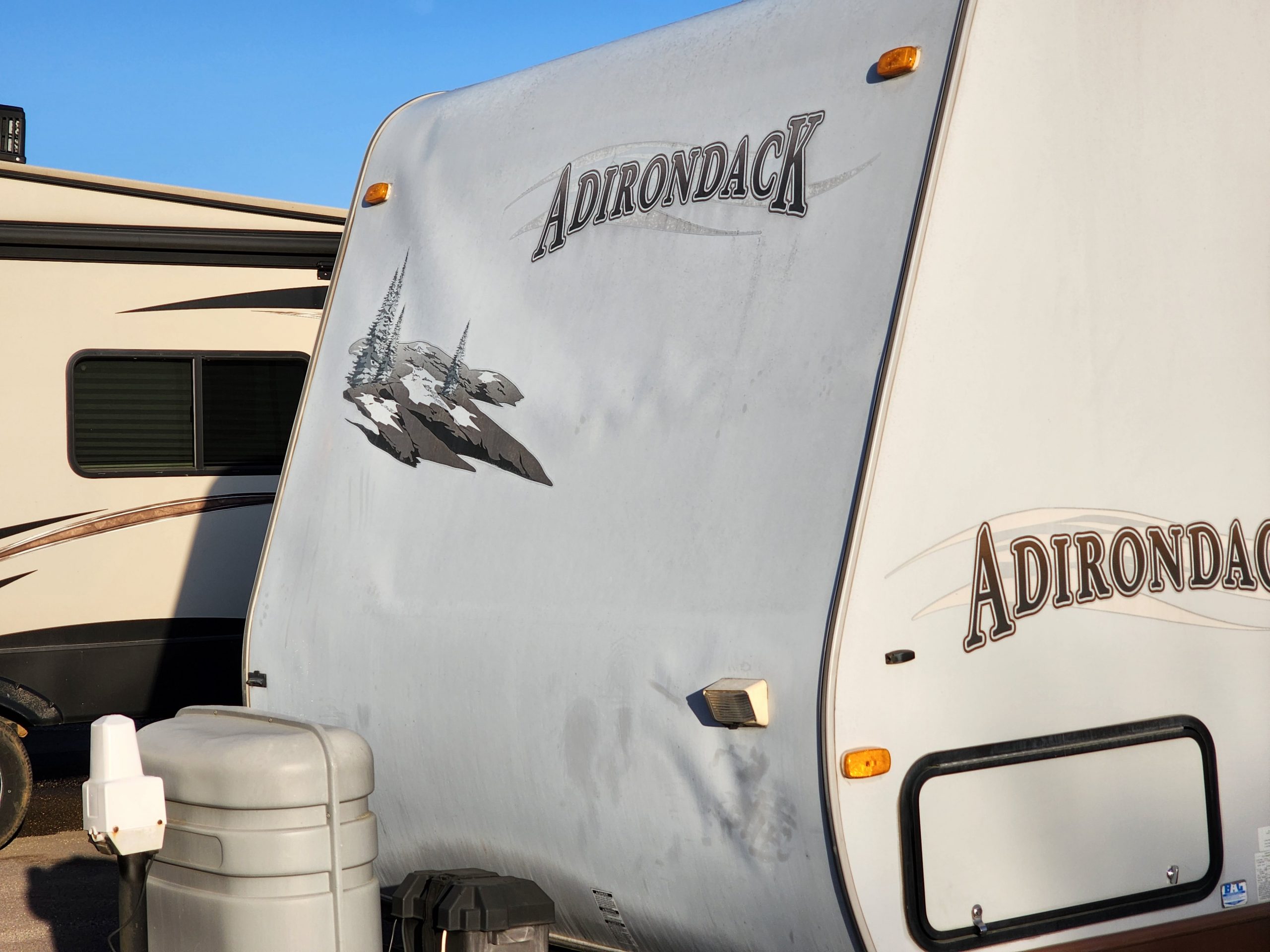 This is why water damage is so catastrophic. By the time that you notice it, the damage will set you back five figures to fix. However, the dealership offered another idea. The dealership could do what’s essentially a patch job, and this would cost $700 for the walls and $7,100 for the floor.

As the technician explained to me, they first cut out the bad portions of the wall and ripped out the vinyl floor from the damaged sections of floor. The camper then sat in the service bay, getting dried out using a dehumidifier and agents that soaked up moisture. Once everything was dried out, the technicians applied sealant to the existing floor, then applied a layer of plywood on top. 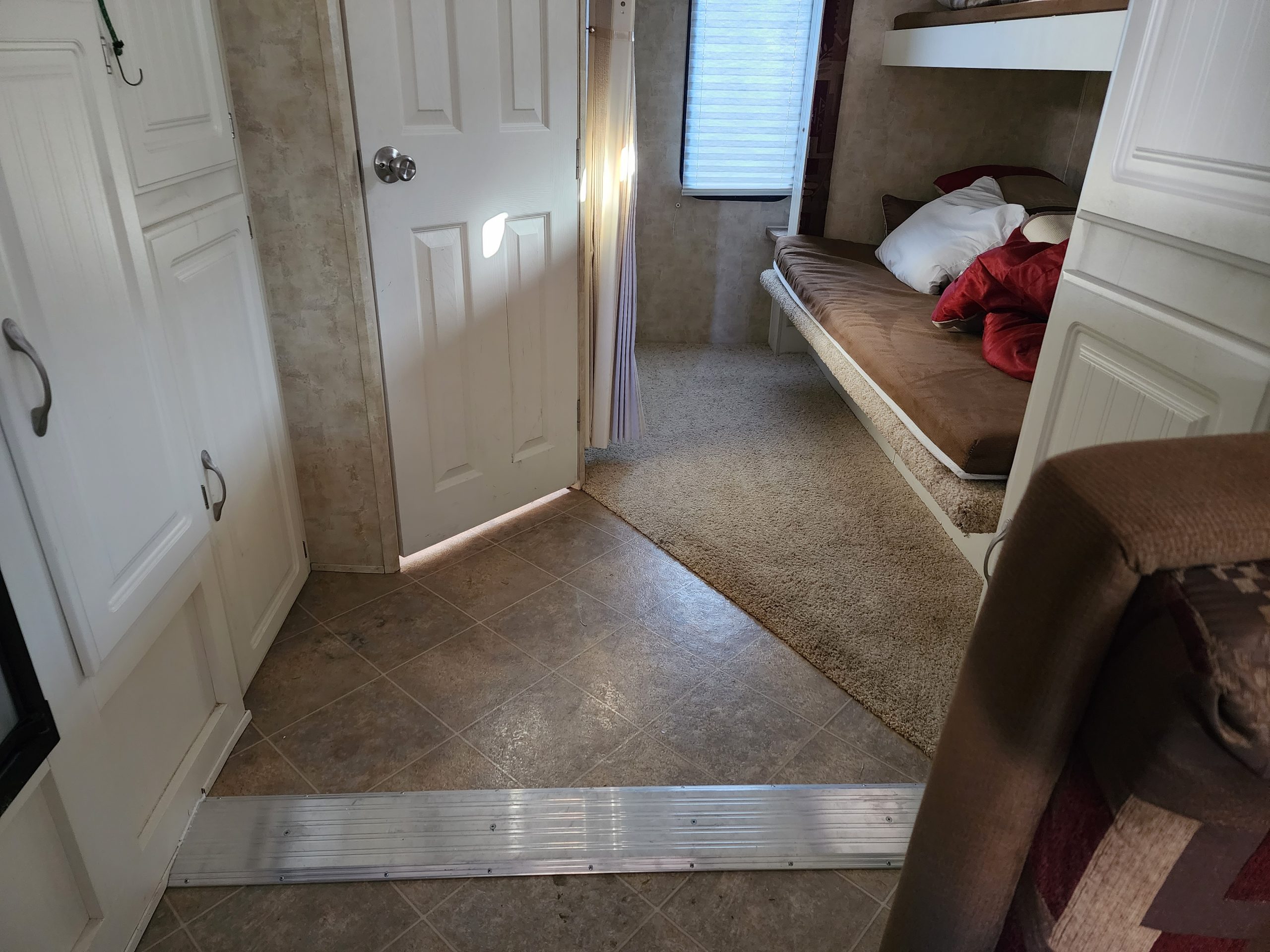 The team then installed new vinyl, installed the camper’s existing carpet back into the rear bedroom, and moved some fixtures up just under an inch to on top of the new plywood. There’s also a metal transition strip between the center floor section and the rear section. That’s there because the transition is a rise of roughly an inch, and that can cause tripping.

During this process, it was discovered that the shower unit itself was a major source of water damage as its seals failed. Thus, every time we took a shower we made things worse. Fixing this apparently required the removal of the shower unit and further cleanup of the walls. It was put back in and sealed as well.

The repair team was able to reuse some of the flooring, but not all. Check out what got tossed: 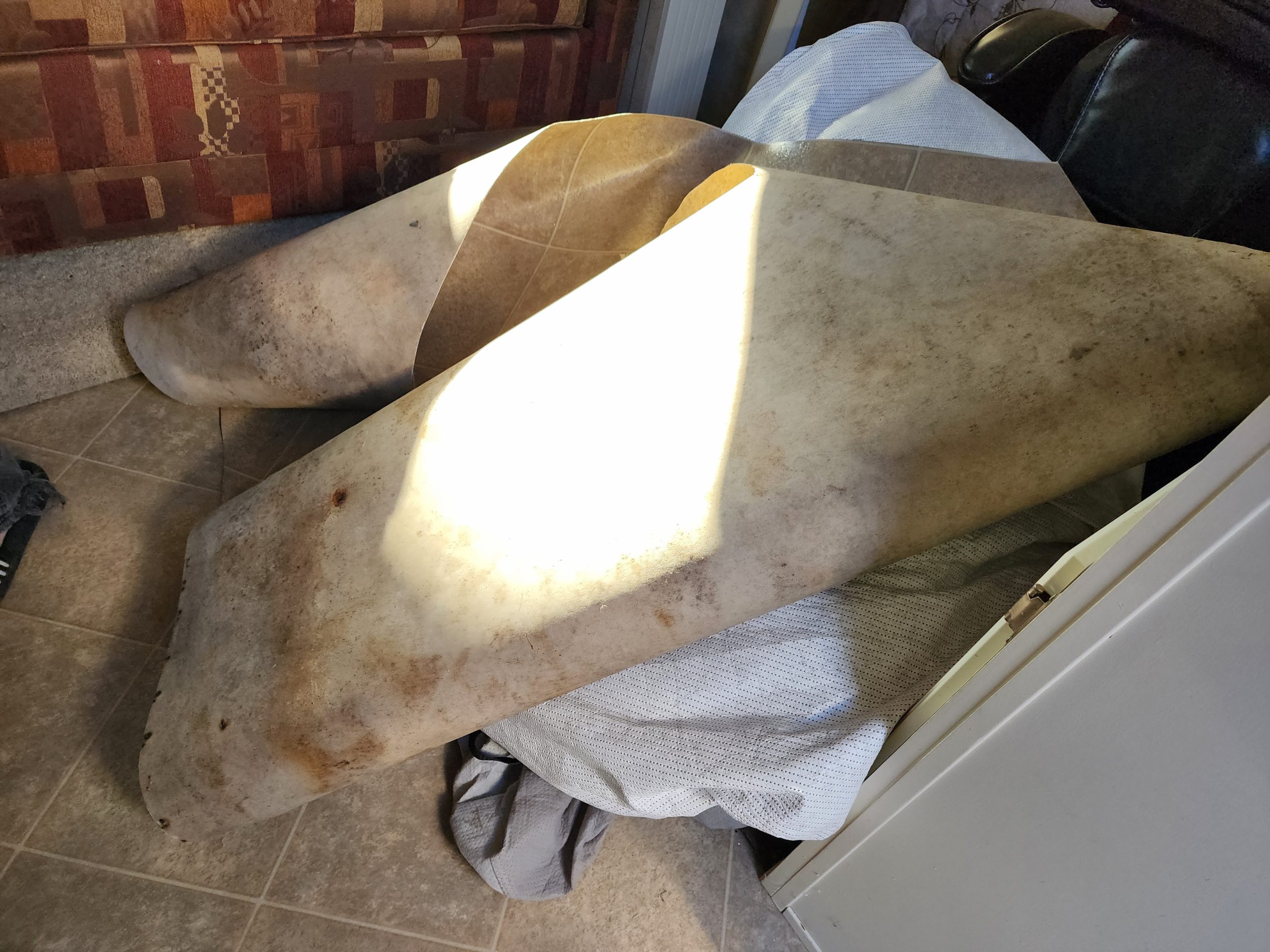 You’re looking at a mix of residue from fittings that were rusting and mold. None of us have gotten sick, but who knows how long that mold has been there. [Author’s Note: The technician called this stuff linoleum, but as a reader helpfully points out, this is most likely vinyl flooring.]

On the outside, the rotted plywood was replaced with new plywood, then sealed up. This job doesn’t repair the delamination. Instead, it uses a brace and self-tapping screws to secure the fiberglass layer back onto the trailer. 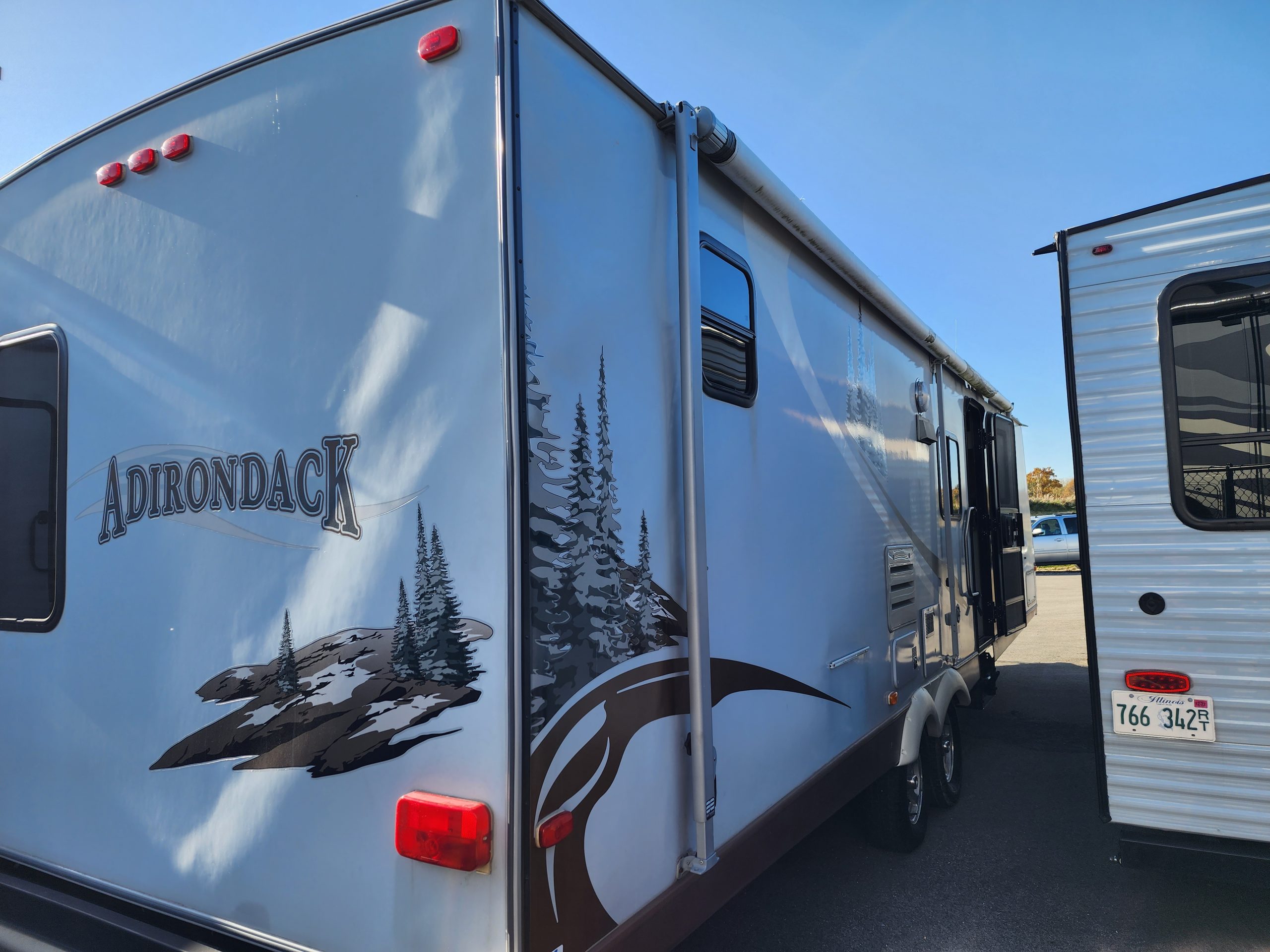 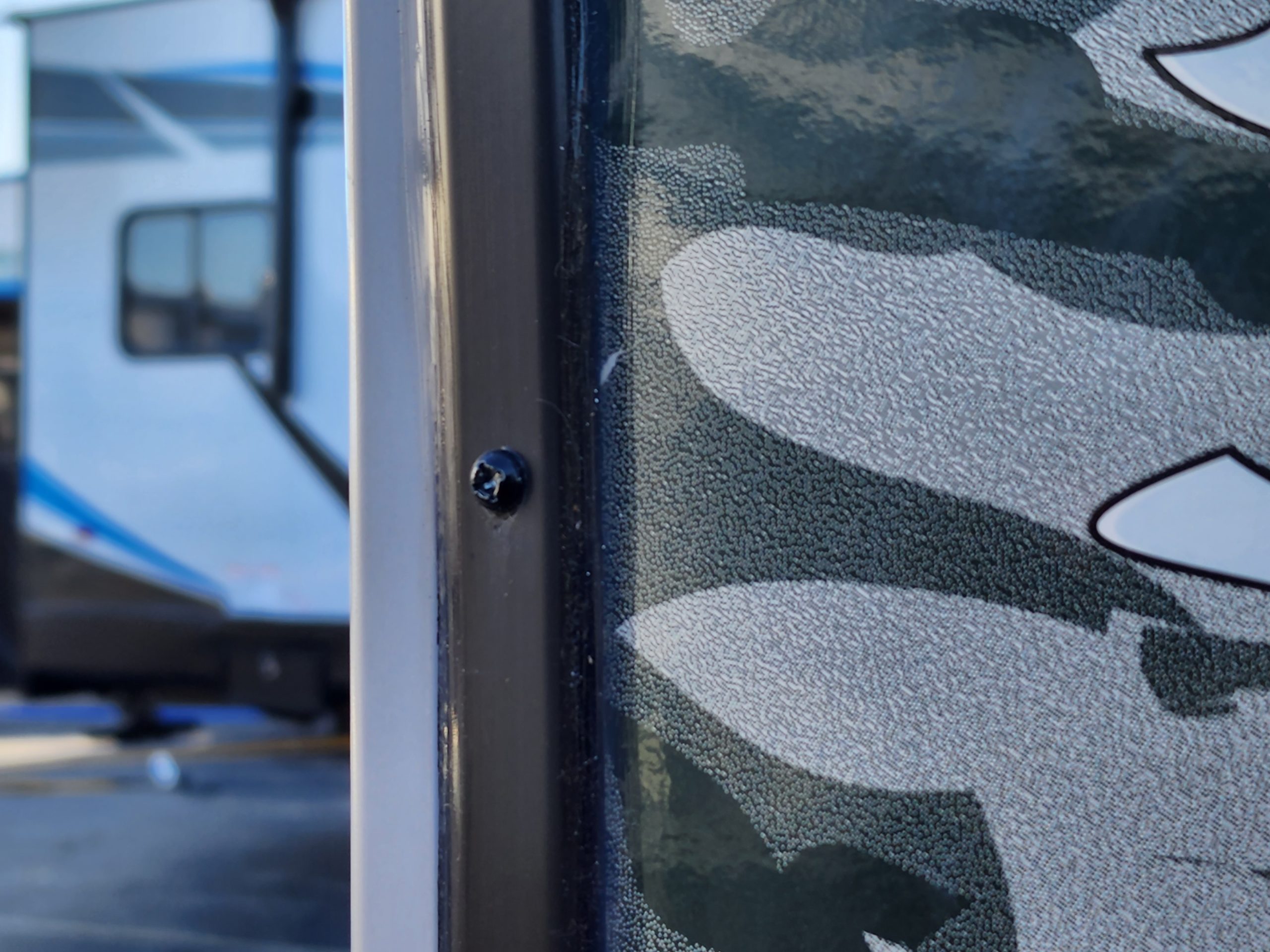 The technician says that it may look unsightly, but he’s confident that the trailer’s water leaks are now behind it, and thus the repairs should last a long time.

Touring the camper for the first time since the repair, things feel great! The floor feels just as solid in back as it does in front. And the rear bedroom, my bedroom, looks as cozy as it did in 2016. And the bathroom never felt this solid, even when we got the trailer in 2016. 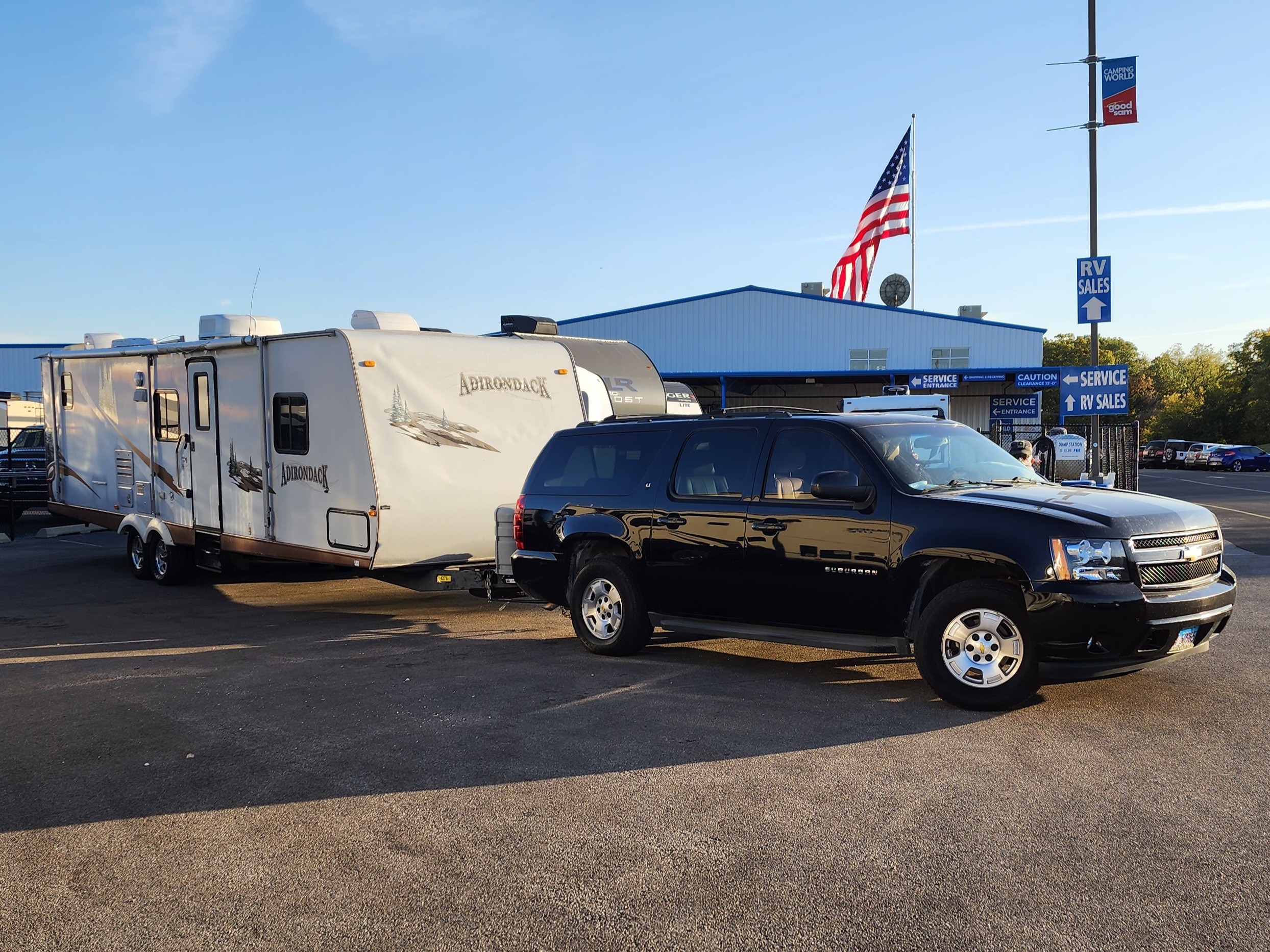 I helped my parents tow it to where it’ll be stored for the winter. There are two problems left to fix, and it’s a rat infestation and the trailer’s torn awning. We know that the rats are eating a fake, decorative apple in the trailer. But we otherwise don’t know where they are.

I’ve warned my parents to take care of that before they start chewing up wiring. Hopefully, that gets sorted. With luck, this thing has some more years and adventures left in it.

Mercedes is a lifelong fan of all things powered by an engine. When she isn't driving one of her five Smart Fortwos or her 14 other vehicles she could be found in the cockpit of a Cessna 172 or perhaps swimming in any body of water that she could find. She also has a deep love for buses of all kinds. Please send her buses. mercedes@theautopian.com Instagram: @mistymotors Twitter: @Miss_Mercedes30 Facebook.com/neonspinnazz
Read All My Posts »
PrevPreviousHere’s Why Michigan, Illinois, And So Many Others Are At War With Carvana
NextWe Need To Talk About The Alfa Romeo Arna, The Car That Foolishly Blended Japanese Styling And Italian EngineeringNext