The four-wheel drive system on a 2000 Chevrolet Tracker is a complicated nightmare that takes a conventional system and adds cost, weight, and complexity to save maybe 0.1 MPG and some wear on a few cheap parts. It’s been driving me so mad that I’ve taken matters into my own hands, enlisting the services of a blood pressure bulb pump so I can get rid of annoying electronics that don’t seem to work. Check out how I got my Tracker’s four-wheel drive system fixed for just $17.

At first, I thought my $700 Chevy Tracker was the deal of the century. After all, once I’d replaced the main fuse that was preventing the 4×4 from running (and that enabled me to snag the machine at such a low price in the first place), the Tracker fired right up. Between the healthy motor, the lack fo rust, and the beautifully-shifting five-speed manual transmission, I was elated with my purchase. But that joy has subsided in recent days, as the formerly mouse-infested Suzuki-turned-Geo-turned-Chevy has become an electrical nightmare.

At first, the charging system didn’t work, so I replaced the alternator with a junkyard unit. Sadly, the alternator continued struggling to make even 12 volts. Then I bought a new alternator, which also didn’t work. Then, for some reason, it began working! And now it, once again, doesn’t. In fact, it left me stranded in a drive-through the other day when my friend stalled the car and couldn’t start it up again due to a low battery state-of-charge (we just push-started it in the drive-through; it was not ideal).

Given these charging gremlins, when I yanked my transfer case lever into 4×4 and saw no four-wheel drive light pop up on the dash, I can’t say I was really surprised. What did surprise me, as I started digging into the fault, was just how complicated the 4×4 actuation mechanism is on this Tracker.

Disconnecting Hubs Aren’t Uncommon, But Many Are Garbage And The Tracker’s Is Possibly The Worst

To drive home this point, allow me to show you the four-wheel drive mechanism on my 1992 Jeep Cherokee XJ. I simply pull a lever like the one shown on the bottom left of the image below, and — boom — I’m in four-wheel drive:

The Tracker also has a transfer case lever (see below), which actuates the front driveshaft in much the same way that the Cherokee’s transfer case lever does. The difference is that the Cherokee’s front driveshaft is always mechanically connected to the front wheels through the differential, axle shafts, and wheel hubs. So once you’ve moved the lever, the vehicle is locked into 4×4. The Tracker, on the other hand, has a disconnect in the front diff. 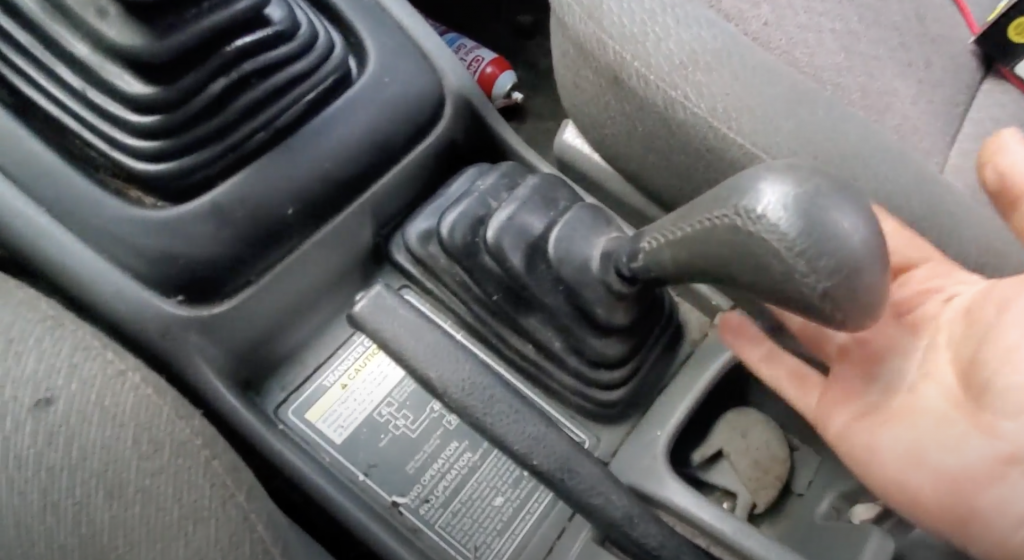 A 4×4 front-end disconnect isn’t really uncommon. On older trucks, you’d have what’s called “locking hubs” at the center of each front wheel (see below). These required you to put the transfer case lever into four-wheel drive, then walk out to each front wheel, and literally spin a hub dial from “free” to “lock” to connect the hubs to the front axle shafts to activate four-wheel drive. 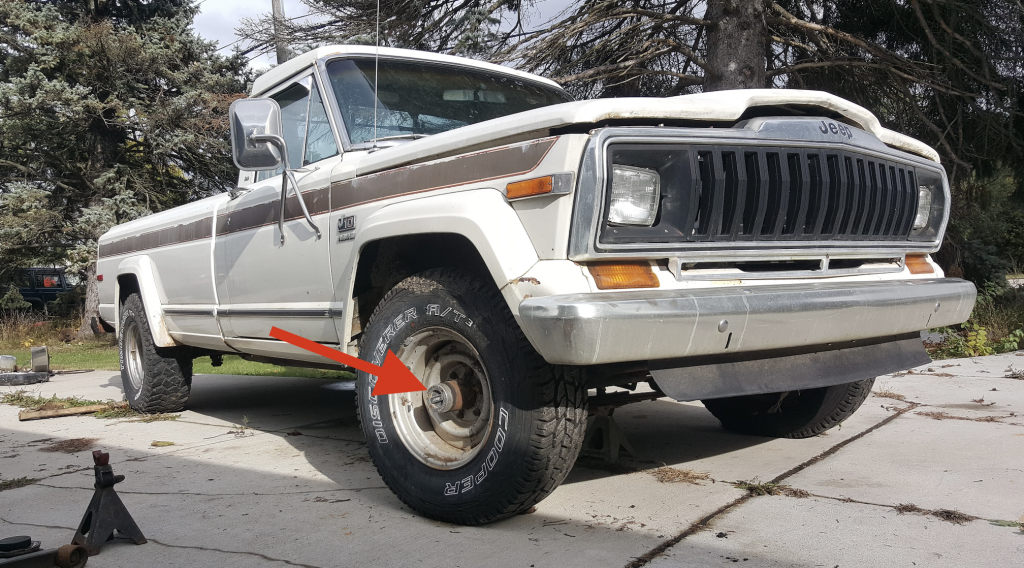 I don’t have a closeup of my Jeep’s hubs, but they’re not too different from these Warn units:

On early Jeep Cherokee XJs (prior to my 1992) and Jeep YJ Wranglers, there was a vacuum style motor (see below) that used a diaphragm and engine vacuum to slide a fork, which would move a collar onto and off of two pieces of an axle shaft, either locking them (and thus the “hubs”) to put the vehicle into 4×4 or unlocking them for maximum fuel economy and reduced component wear. Even the current Jeep Wrangler JL uses a similar system to the early XJ’s, though it’s an electric motor and not a vacuum.

Actually, while we’re on the topic, I noticed while at the press launch that the Ford Bronco Raptor even has a vacuum-disconnect front axle disconnect at each front hub: 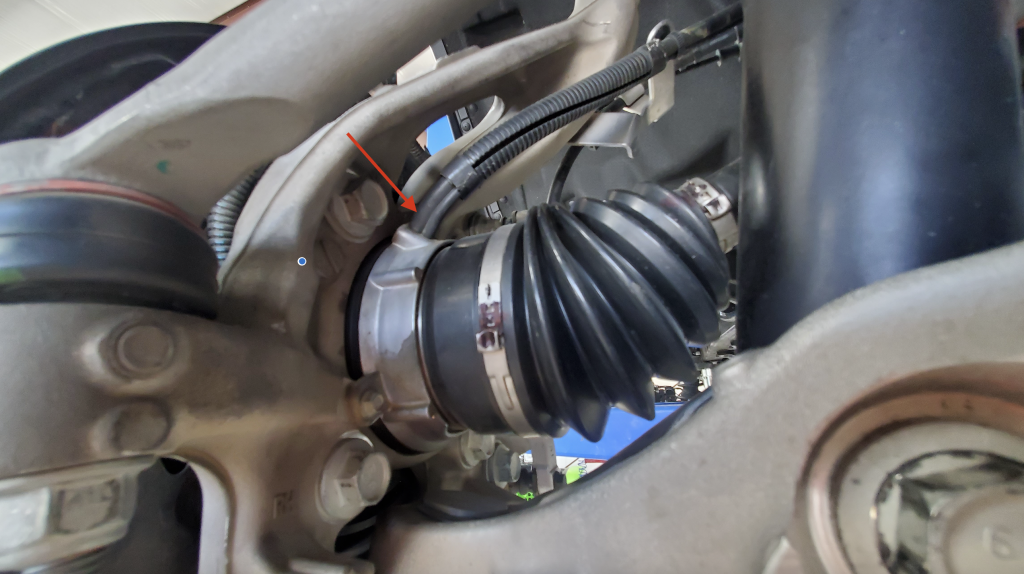 Anyway, the point is that, even though my 1992 XJ doesn’t have a disconnect function, it’s not uncommon to have some kind of system to prevent the front drivetrain from spinning unnecessarily when the vehicle is in rear-wheel drive. The problem is that many of these “front axle disconnect” systems tend to fail early and often (the XJ/YJ vacuum disconnect one does), so people just replace the systems with something that they can switch by hand.

But even that Jeep system isn’t as bad as the Tracker’s. Just look at this nonsense:

A Look At The Tracker’s 4×4 System

As previously mentioned, the Chevy Tracker’s four-wheel drive system starts with a transfer case lever, just as my Jeep XJ’s does. Yanking that sends power to the front driveshaft, which drives the front differential. But unlike on my XJ, that doesn’t mean the axle shafts are being driven, since there’s a disconnecting front hub system meant to improve fuel economy and reduce wear of rotating drivetrain components. To lock that front “hub” system and engage four-wheel drive requires an army of components to all function properly.

Pushing that transfer case lever in the cabin into four-wheel drive actuates a switch, labeled “1” in the image above. This then tells the 4×4 controller (or ECU on later models), labeled “5” above, to send current to an air pump located behind the front bumper. The air pump is labeled “7” in the diagram above. This pump creates about 6psi of pressure in a rubber hose that runs into the differential, triggering the actuator, labeled “8,” and putting the vehicle into four-wheel drive.

Here’s a look at the pump: 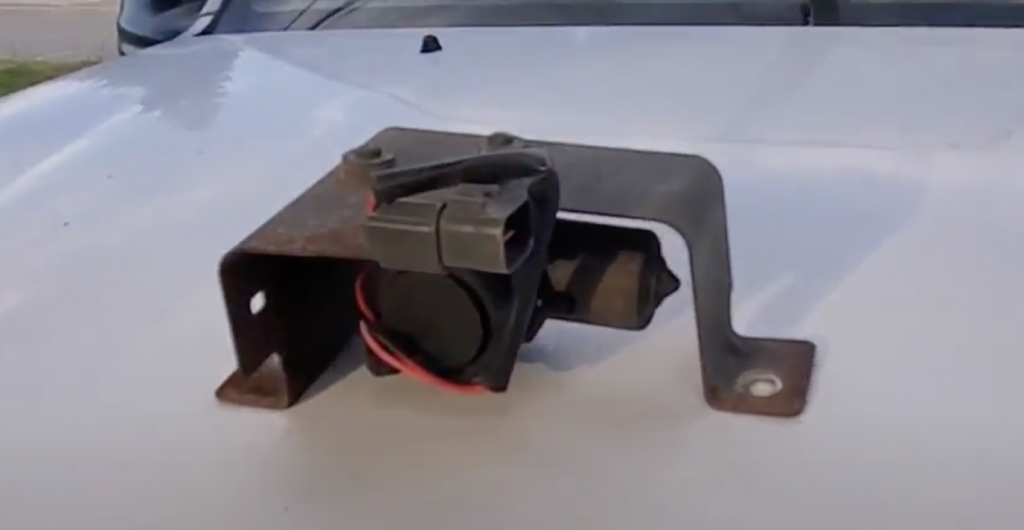 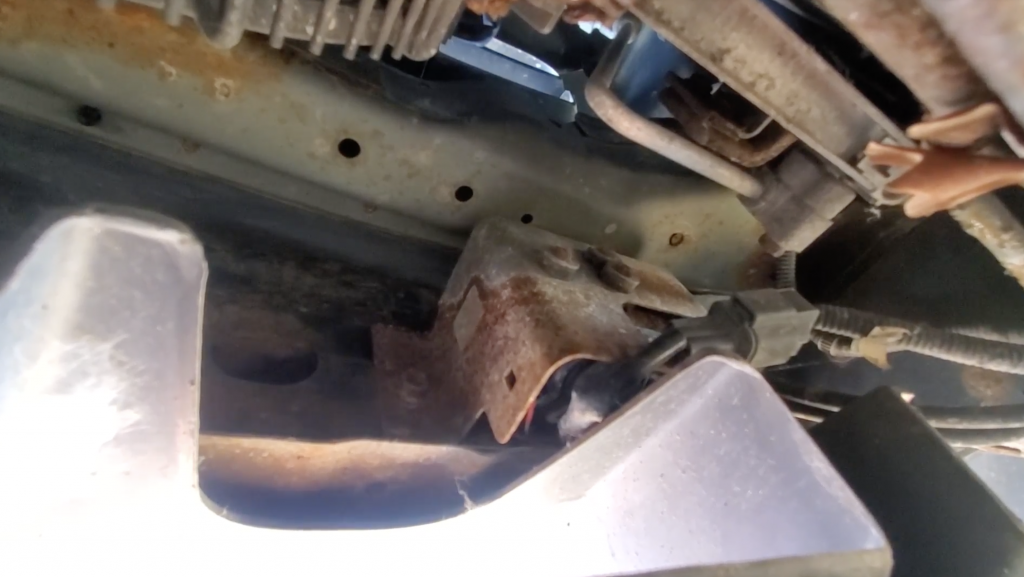 And here is a video and some pictures from eBay of that actuator in the front differential that the pump sends pressurized air to: 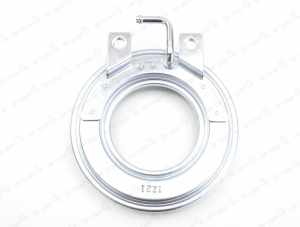 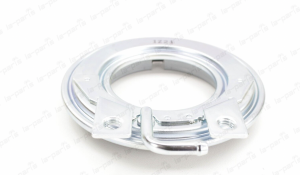 This electropneumatic system introduces lots of components that can fail. The switches in the transfer case can fail, the ECU or the wiring from the ECU can fail, and the pump can fail. In any case, the pump would no longer create pressure to trigger the actuator in the front differential. Worse than any of those failure modes is the differential actuator failing, as this would require one to tear apart the whole diff, which is a humongous job.

In my case, it seems that my pump works fine, as it turns on when I hook it up to 12-volts. Oddly, when I hook up a multimeter to the wires going to the pump, I see about 12 volts. So what gives? Well, “12 volts is not 12 volts,” as my brother Tom, a computer engineer, told me. When I hook the pump to the connector, I’m adding a load, and it’s clear that the source (ECU) sending current to the pump is unable to handle that. I bet if I hooked up a multimeter in line with the pump, I’d see a major voltage drop.

In any case, my pump isn’t working, and neither did a replacement junkyard unit. Luckily, I found out later, the actuator in my front diff is functional. This meant I could leverage a brilliant trick.

After considerable research, I learned that some folks had used hand pumps in place of that electric pump behind the front bumper, meaning any issue with the transfer case switches, wiring, 4×4 computer, or electric pump could be bypassed. I had to try this myself, so I headed to harbor freight and bought a bulb-style pump:

This pump is exactly the same unit as the one you might have noticed being used to check blood pressure:

I simply plugged the electric pump’s air inlet hose with a bolt, and pulled the electric pump’s outlet hose off the hardline mounted to the frame. Then I slipped the hand pump’s hose onto that hardline, and zip-tied the bulb in the grille opening (I didn’t want to tie it below the bumper, since this could get damaged while off-roading). Here’s a look at my setup: 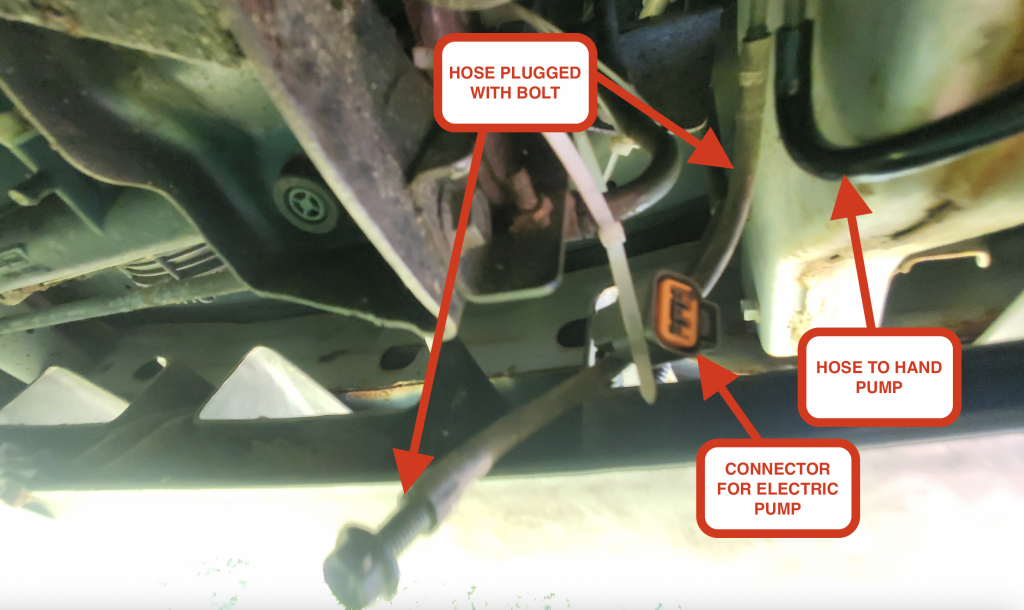 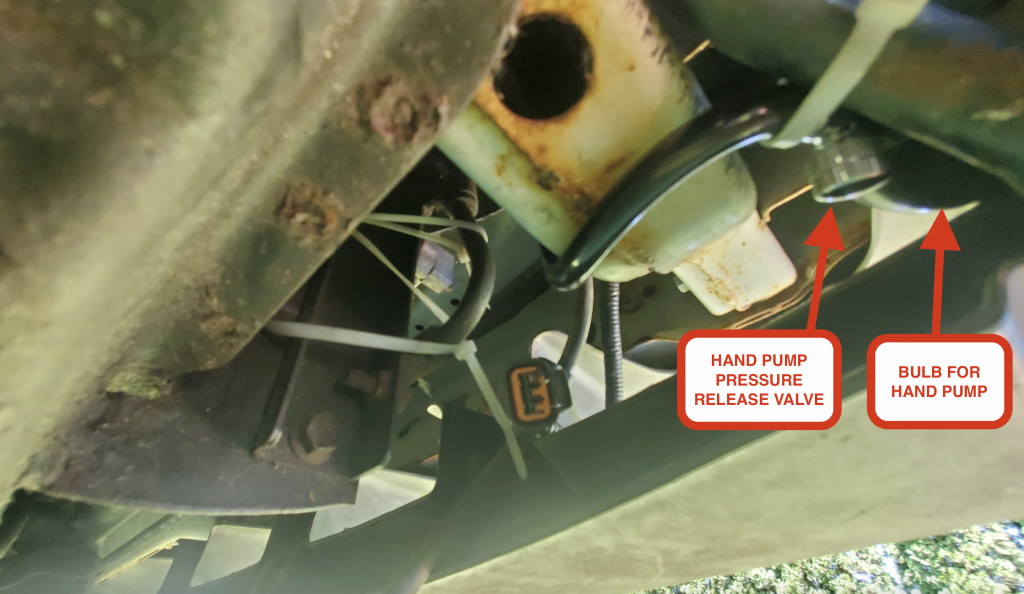 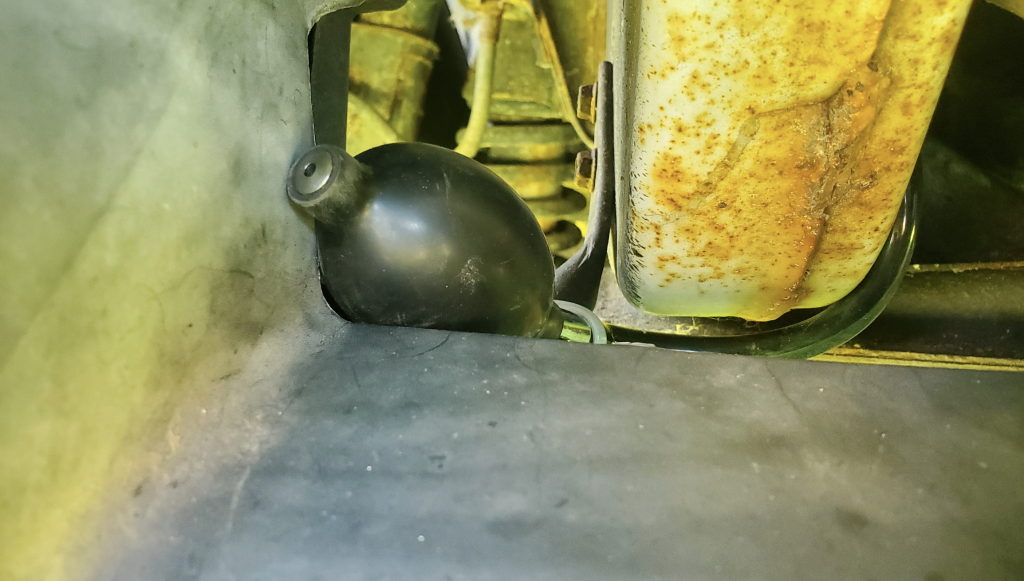 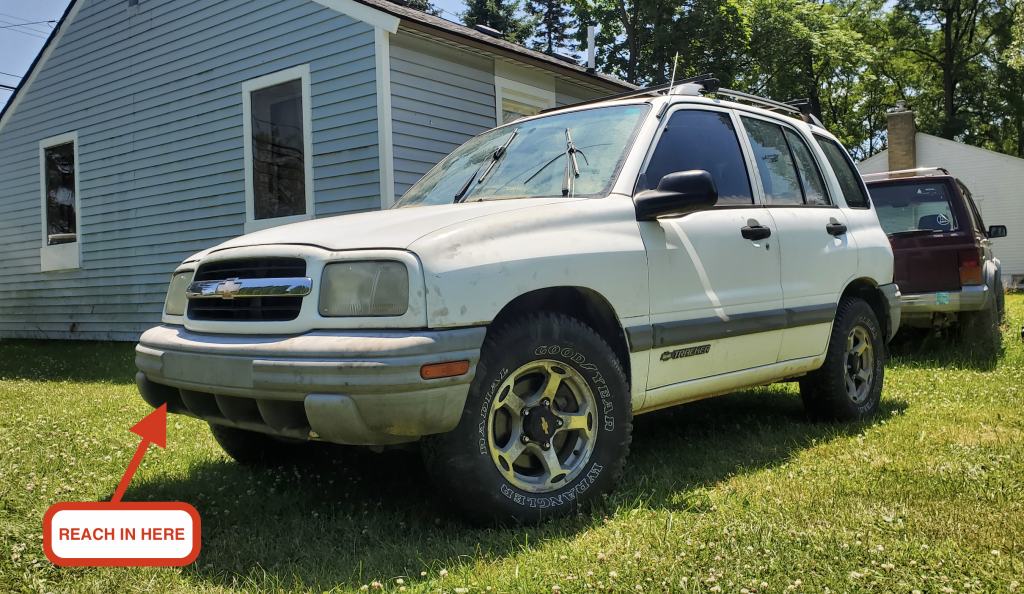 After some testing, it seems that three pumps of the bulb is enough to actuate the clutch in the differential, connecting the axle shafts, thus activating four-wheel drive. It’s a $17 fix to an electrical problem that I just don’t want to deal with right now, and though I could route the hand pump hose all the way into the cabin, I don’t mind walking to the front of the vehicle to go into four-wheel drive. It’s no more inconvenient than my Jeep J10’s manual-locking-hubs four-wheel drive system, and it just works.

My coworker Jason has demanded that I mention that these blood pressure bulb-style pumps have been used in vehicles before, specifically to adjust lumbar in the Merkur Scorpio. Here, have a look: 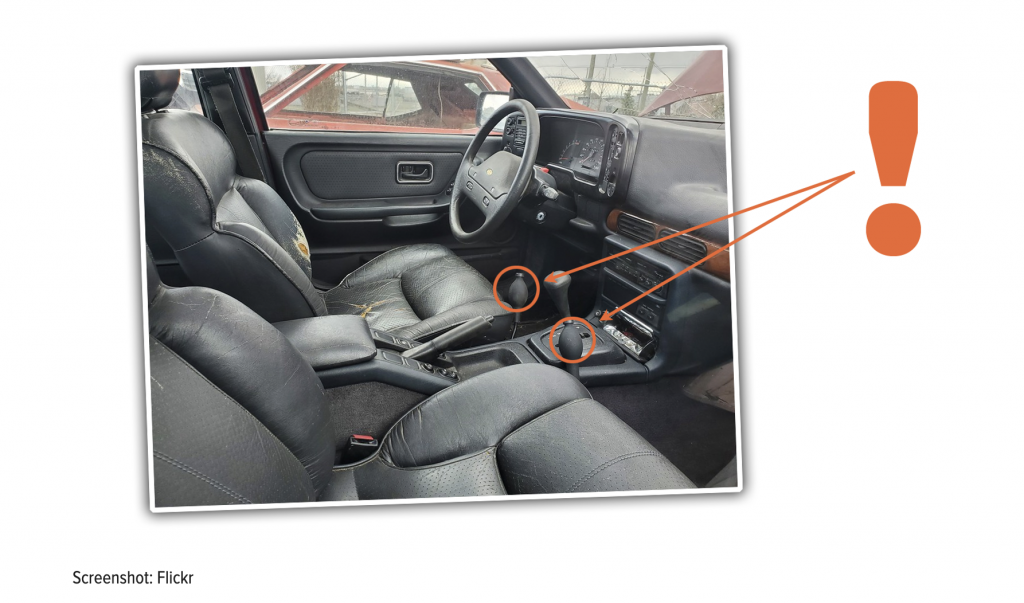 The bulb-style hand pump really is a brilliant contraption.