I speak from experience when I say that a tiny, slow-ass, ridiculous-looking electric car is actually a really useful thing. My time with the cheapest EV in the world, the Changli, has taught me this lesson, because I’ve found that a surprisingly large percentage of my day-to-day transportation needs can be easily met with a tiny, slow-ass, ridiculous-looking electric car. I do love my Changli, but even keeping in mind that this Alibaba-sourced car has far more amenities than I’d ever have guessed (backup camera, MP3 player, metric tons of sex appeal) it’s still pretty marginal for most people who, unlike myself, feel like its below their station to, say, drink out of a plastic cup. That’s where a company like Wink comes in. It’s importing low-speed EVs from China, but it’s using models multiple notches above the Changli in terms of amenities and quality, and the company taking care of all the importation and federalization stuff. The crazy part is that it’s started doing this because of my original video. What?

Yep, that’s right. I just got off the phone with Wink CEO Mark Dweck, and he told me that he had the idea to import little useful cars like these after watching my first Changli video two years ago. “You don’t know this, but you’re the one who woke me up to this. I saw your YouTube video!” he said. I’m as shocked as you are, especially when I learned that Mark is a genuine, no-joke car guy — the sort of person that has owned multiple Aston Martins and Cords and Duesenbergs and all manner of remarkable cars. His thinking was that the market could use a car like the Changli, just, you know, better — something that he himself would own and drive.

[Ed Note: This is a real conversation I got to listen to. I called up what I thought was the press number for Wink after they emailed us and, rather than get a PR person, I got the CEO! When I told him I worked with Jason he was excited because that’s where he got the idea. Some other things he said during the conversation: “I’m a very experienced car collector and I restored an MG when I was 14 in my parent’s hallway in Brooklyn.” He also had these words of wisdom: “It’s easy to make cheap products in China, it’s harder to make good cheap products. And bad cheap products are just shit, pardon my English.” Finally, he invited us down to drive the car and told us he’d even take us to a fancy dinner at some place called Gray’s Papaya, which I assume has at least three Michelin stars. – MH]

You know what? Just in case you’re unfamiliar with the Changli, here’s a little video recap I did after a year of ownership for The Old Site so we’re all on the same page regarding the general category of these kinds of vehicles:

Okay, so essentially Wink is importing somewhat higher spec vehicles and selling them as street-legal, Neighborhood Electric Vehicles (NEVs) for prices that go from $8,995 to $11,995. That’s a good bit more than the $3,300 or so I paid to buy and import my Changli, but avoiding the decidedly non-trivial hassles of importation and registration is unquestionably worth at least some amount of money.

In fact, making one of these street-legal isn’t exactly easy. Maybe mine isn’t exactly right. I’m not saying, and what are you, a lawyer? But Wink does seem to be doing the work to make these DOT-approved and a bit more comfortable for the American market. From them:

“Wink’s vehicles are fully street-legal, DOT-compliant LSVs that are legally allowed to operate on roads posted up to 35 mph. They’re ideal for commuting in crowded urban cities, suburban grocery runs, beach and island towns, retirement communities and anywhere else that large or expensive cars are a disadvantage.

As a separate class of vehicles, LSVs aren’t technically cars but rather fall into their own legal category. They must adhere to certain production standards, include specific safety equipment, and have VINs on file with the NHTSA. Wink’s vehicles are produced to exceed these safety and production requirements, and our factory is fully registered with the NHTSA.”

Mark also explained just how much is added to the cars to make them acceptable for Wink. There’s DOT-compliant lights and mirrors, DOT compliant special windshield, a unique dashboard and instruments, dual-circuit brakes with an electronic e-brake, DOT-compliant seat belts, and more. These aren’t the same as what’s sold for the Chinese domestic market.

There’s two main models of Wink, it seems, the Sprout and the Mark 1, and each of those is available with solar-panel-equipped variant. The Mark 2 appears to be a four-door variant of the Mark 1: 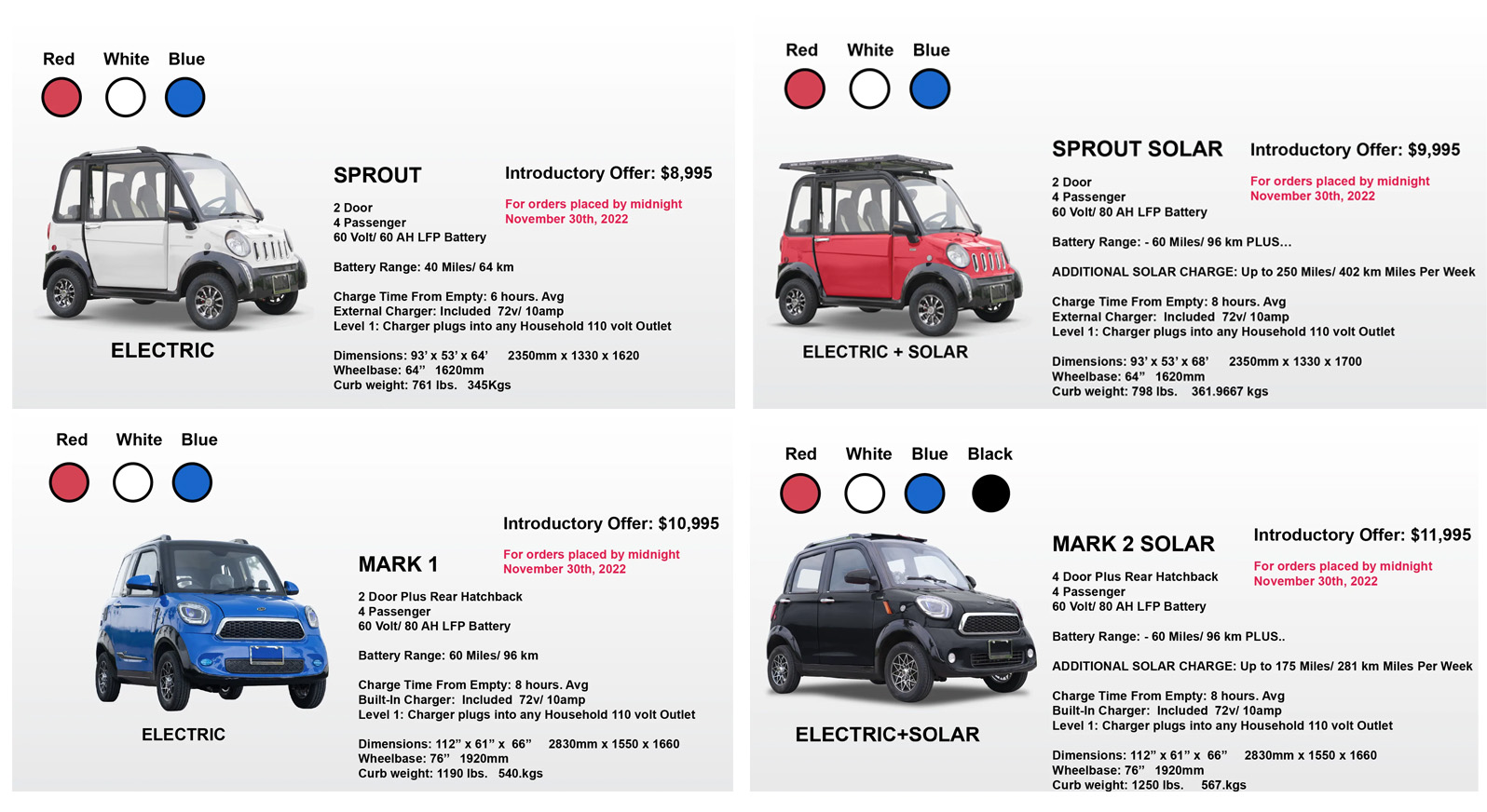 Wink seems to be pushing the very Mini-inspired Mark 1 currently, so let’s dig into that a bit. Also, they emailed me a bunch of pictures of the Mark 1, so that doesn’t hurt, either. 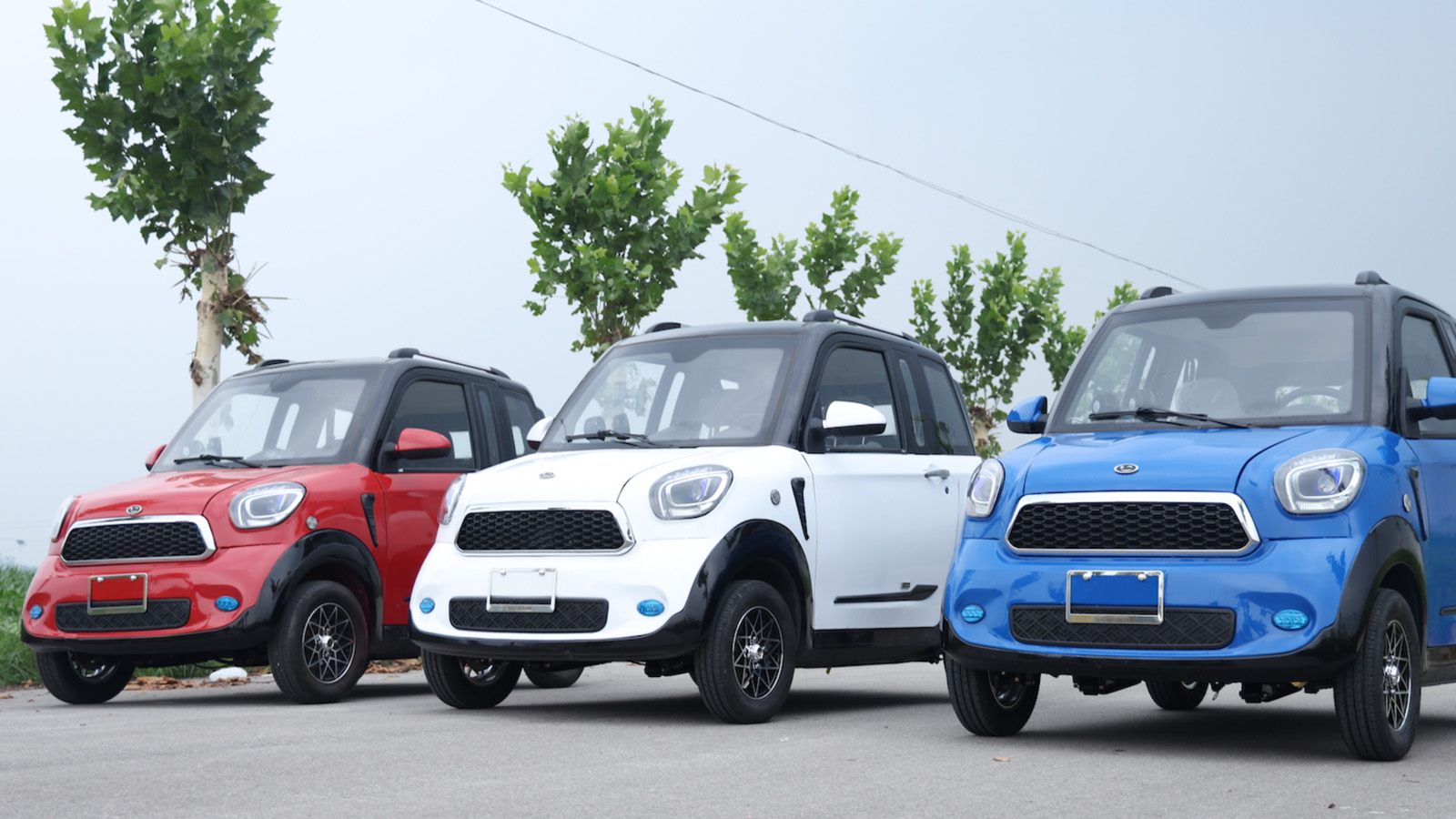 Wink isn’t trying to pretend that these cars are being hand-made in their own workshop by specially-trained Swiss craftsman who have been passing down the art of making small EV city cars from generation to generation since 1541, but they don’t exactly come out and say what Chinese EV they’re importing, either. I was curious, though, and a bit of digging on Alibaba soon revealed something that looks like it may be similar to this one: 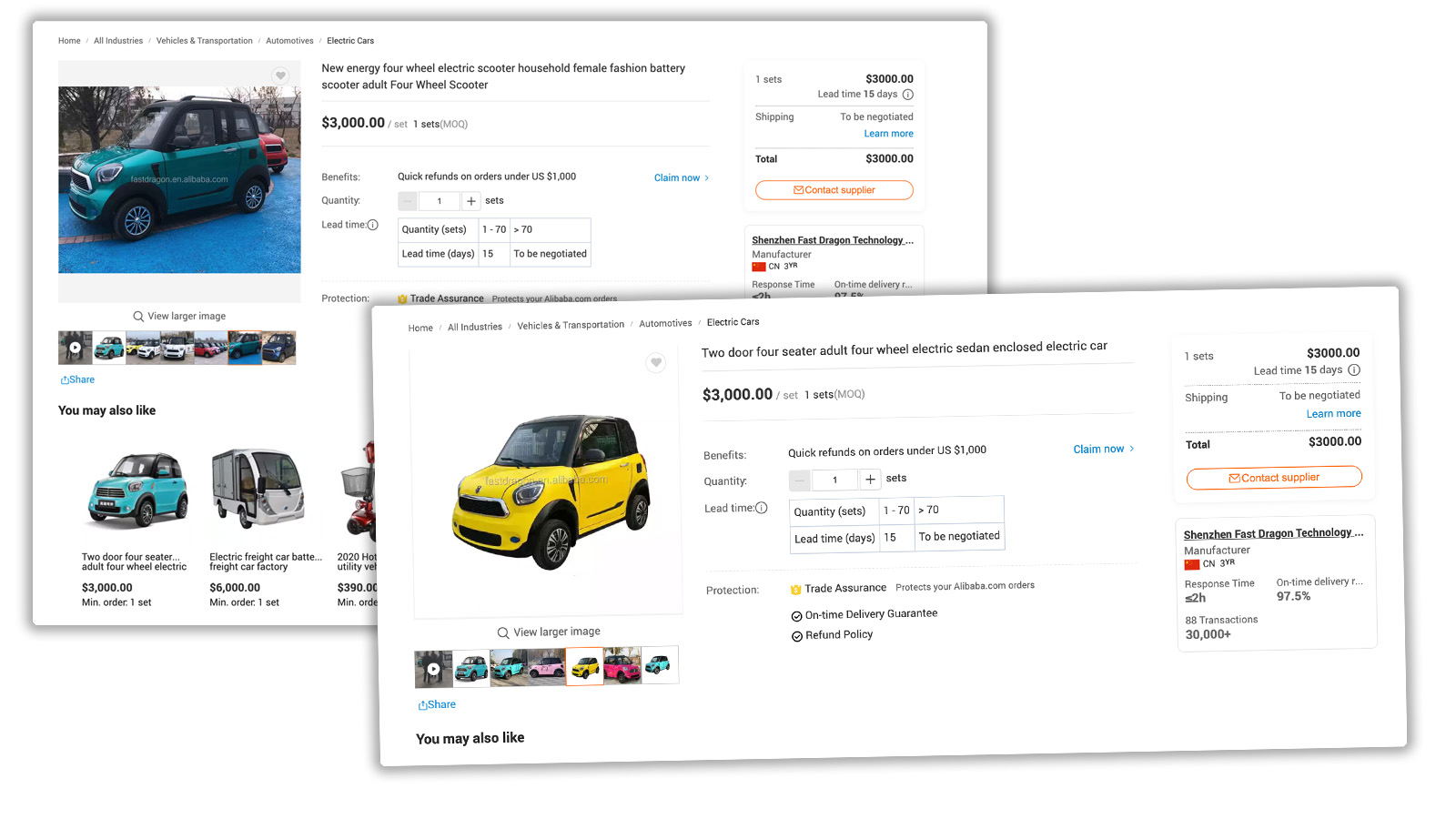 The Wink Mark 1s seem to be just about identical to the Shenzen Fast Dragon Technology (hell of a name) cars that sell for $3,000. I asked CEO Mark about this, and he said he did not deal with Shenzen Fast Dragon, as they are not the original manufacturer, and that he surveyed dozens factories,  and sent in inspection teams to find the actual source. They eventually settled on a modest-sized factory/carmaker, because that allowed them more flexibility to undertake the customizations they wanted.

Also interesting: those big fans on the dash: 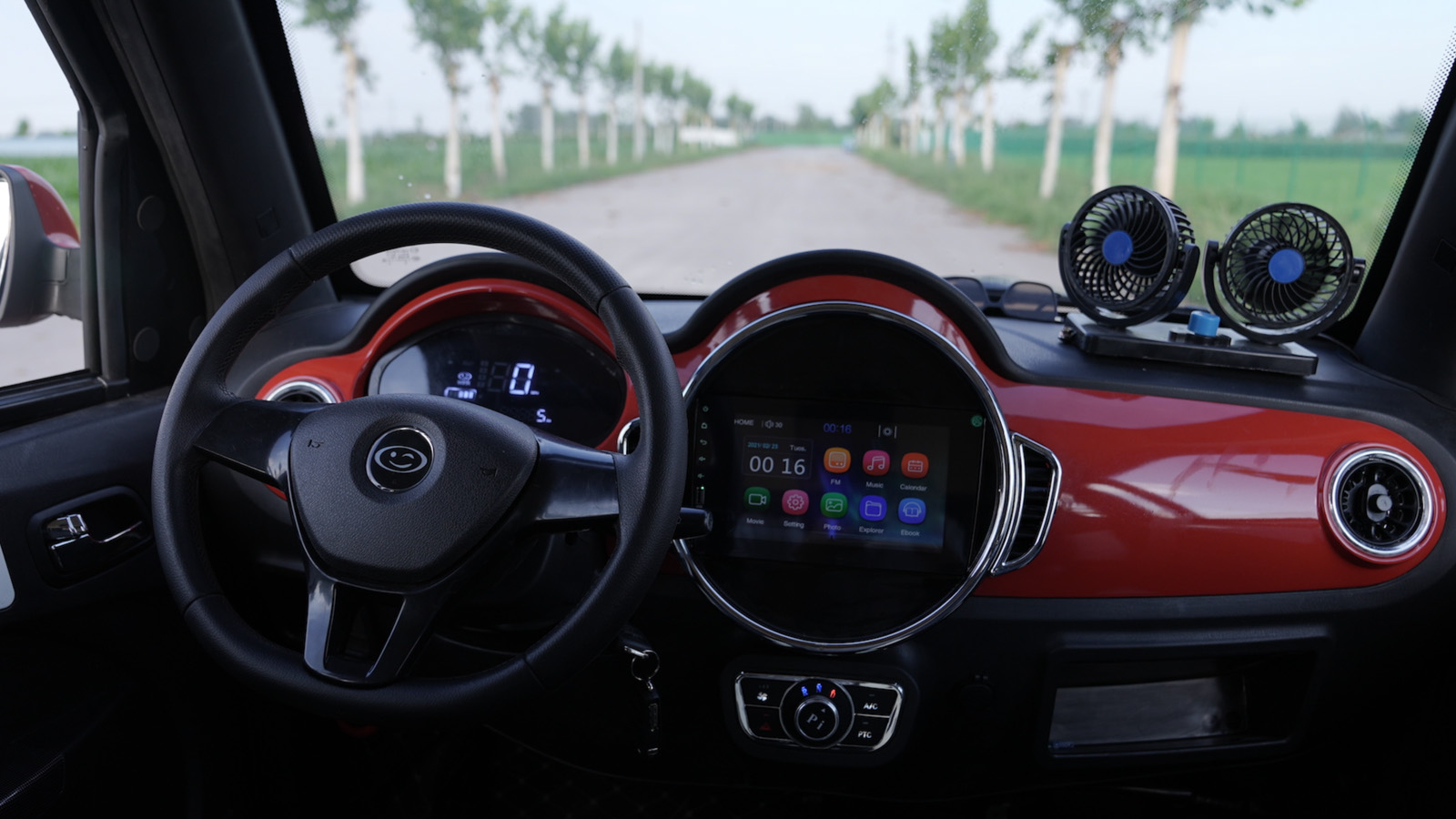 The interior has some elements and materials I recognize from the Changli, but it’s very clearly much more refined. The headliner material looks familiar, which is fine, because, despite it being the color of a fuzzy band aid, has proven to be durable. The seat vinyl looks similar to the Changli also, which makes me wonder about how well the stitching will hold up, but at the same time my experience has found it to be quite adequate. 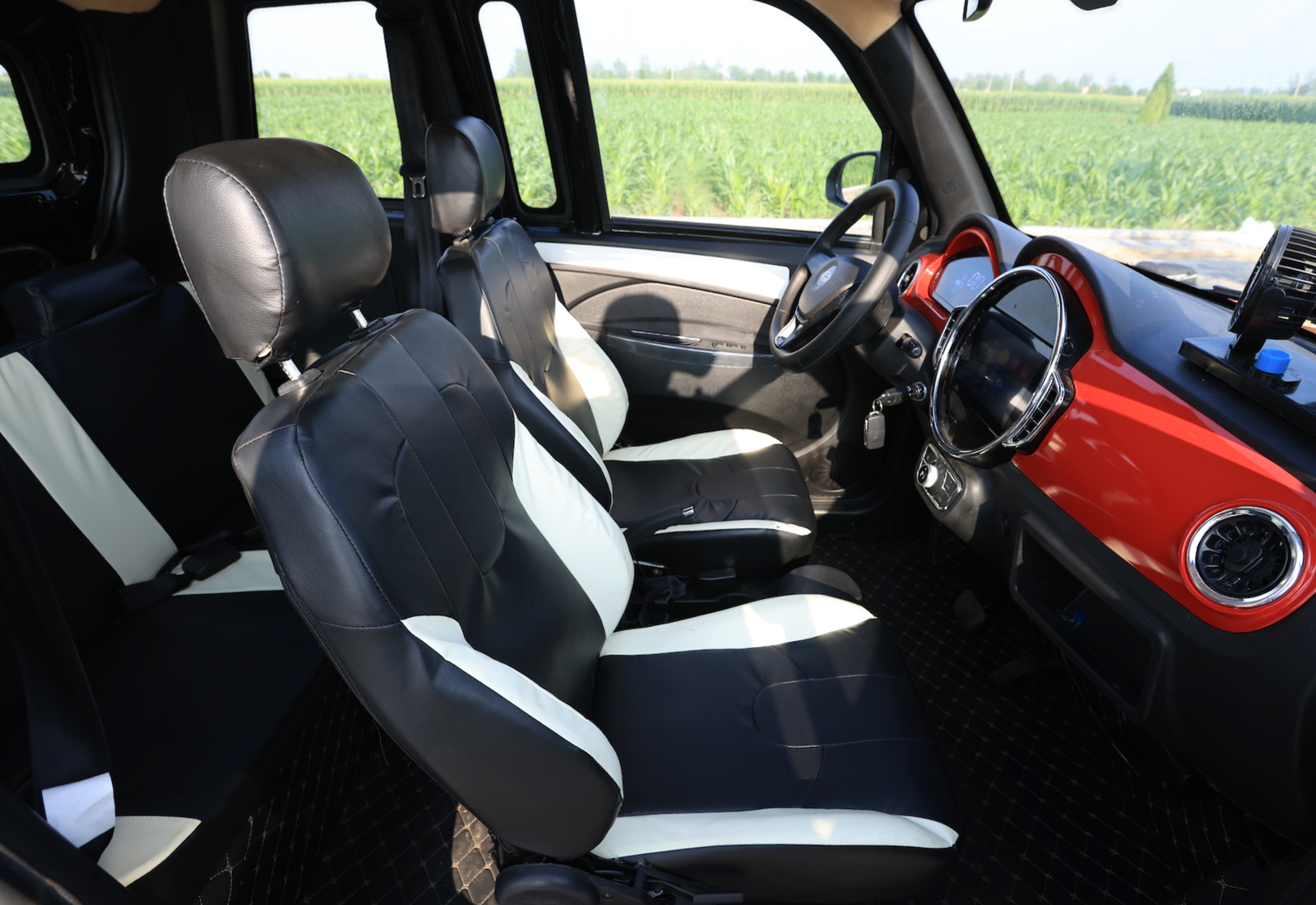 The basic range for the Mark 1 and 2 is 60 miles from its 60V/80 amp-hour lithium-iron phosphate (LFP) batteries, which is certainly good enough for the sorts of use this car will get. The top speed has been limited to 25 mph, and based on these specs that tell me the Winks have a motor that makes 3kw/4 horsepower (peak power 7kw/ 9.,3 hp!), I’d bet this accelerates a good bit better than my 1.1 hp Changli.

The specs for the solar-equipped version also say “up to 175 miles per week” but, like anything solar, there’s so many variables that can affect these results, I wouldn’t feel comfortable trusting any numbers for how much extra range could be expected. 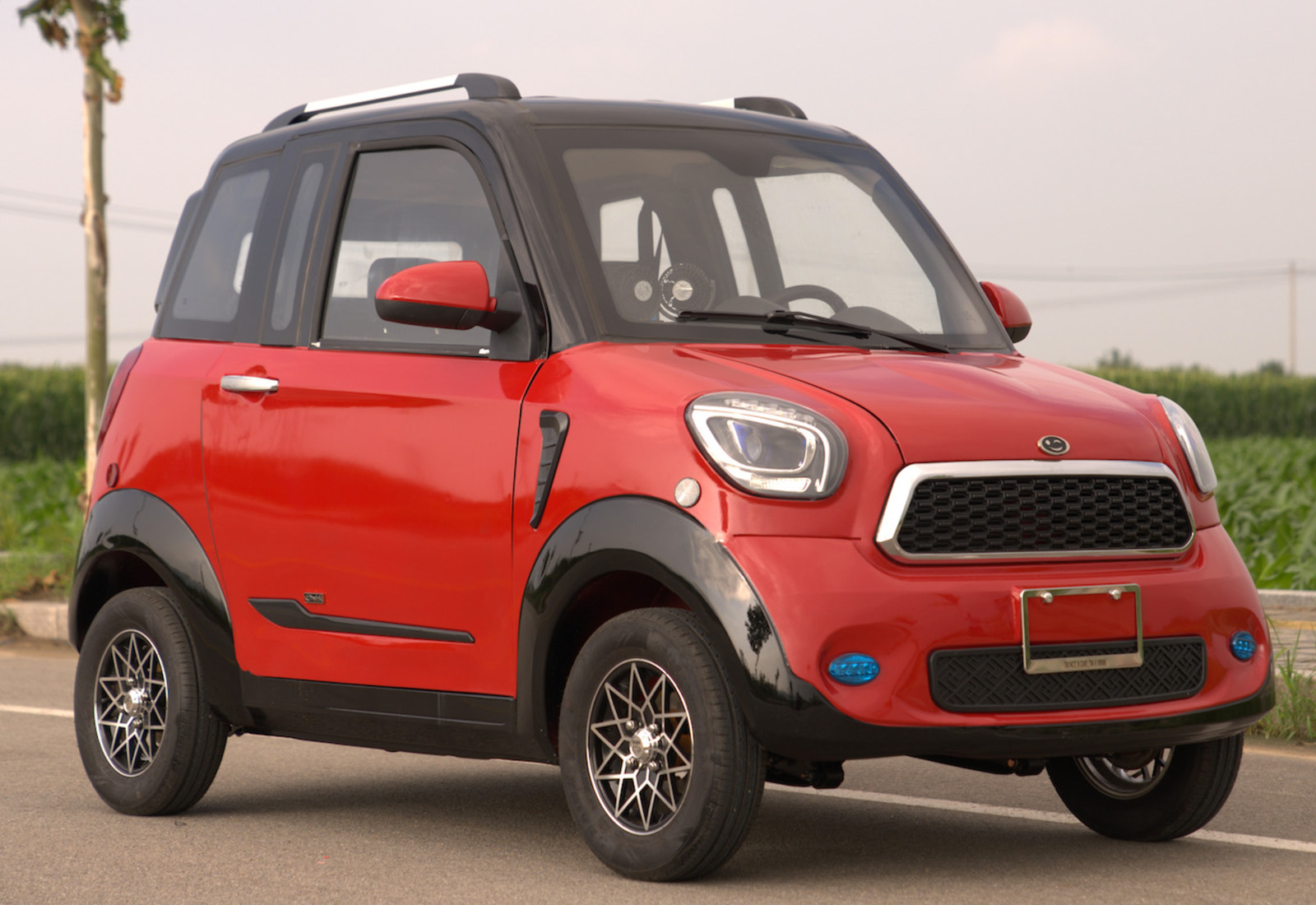 My biggest question about these Winks is why they decided on a model that looks so much like a car that already has a presence in the US market, the BMW-owned Mini? I feel like by picking this design, they’re just asking for trouble. Remember the whole shitshow that Indian carmaker Mahindra went through with their Roxor off-road vehicle because it looked like a Jeep? And Mahindra even had a long history with official Jeep licenses, something that Wink definitely does not have with Mini. 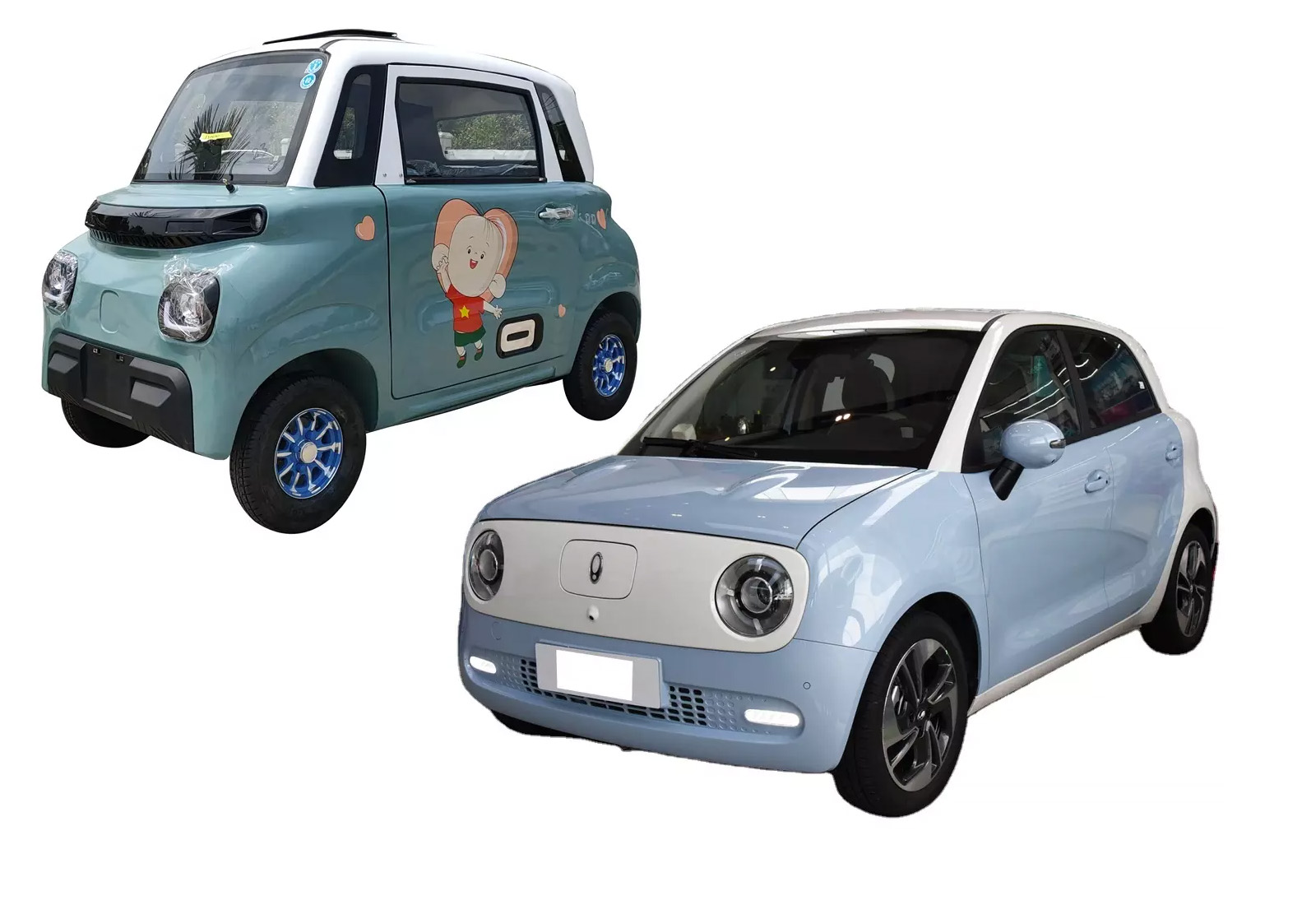 I did ask Wink’s CEO Mark about this, and he told me that he has had years and years of experience in copyright and trademark law, and he’s certain that there are enough significant differences between this and Mini’s designs that he’s not concerned. 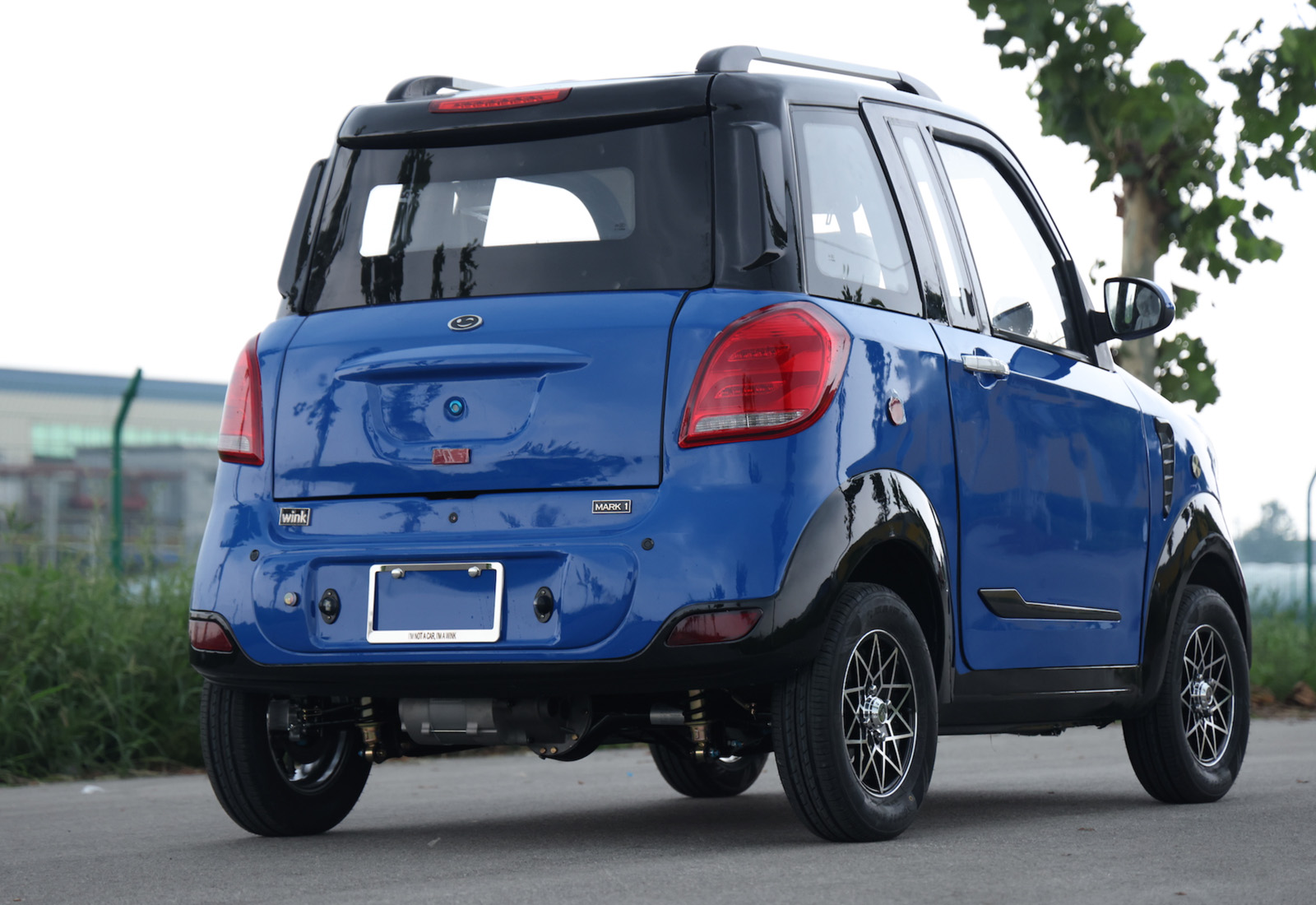 Overall, though, I think the American market needs more cars like these, because they can absolutely fill a transportation role while being environmentally friendly, cheap as pickled dirt to own and maintain, and even fun. Because they are! Parking becomes a non-issue with these things, and the process of driving a couple miles to grab groceries or takeout just feels easier and more fun in some little thing like this than a whole 4,000-pound SUV. Save your big car for the longer, faster trips, and use one of these guys for the close work.

It works, and I know because I’ve done it. If a company like Wink can take away the hassle of registration and importation, they may be worth a look, even at $9,000 or so. Plus, after talking to the CEO, I really do think these have been significantly upgraded for safety and DOT compliance. The CEO claims that they are the only company that sells cars like this that are absolutely legal and compliant. I can’t prove that at this moment, but they do seem to have done the hard work.

I’m going to try and get Wink to let me drive one of these so I can really see what they’re like. If I can pull that off, you’ll be first to hear about it!

I'm a co-founder of the Autopian, the site you're on RIGHT NOW! I'm here to talk to you about taillights until you cry and beg me to stop, which I absolutely will not. Sorry. Hug? Also, David's friend.
Read All My Posts »
PrevPreviousJewelry Made Of Leftover Paint From Old Car Factories Is Fascinating And Beautiful. Check Out My New Gift
NextA Deep-Dive Into The Absurdly Active Flying-Car Industry In ChinaNext