Jewelry Made Of Leftover Paint From Old Car Factories Is Fascinating And Beautiful. Check Out My New Gift 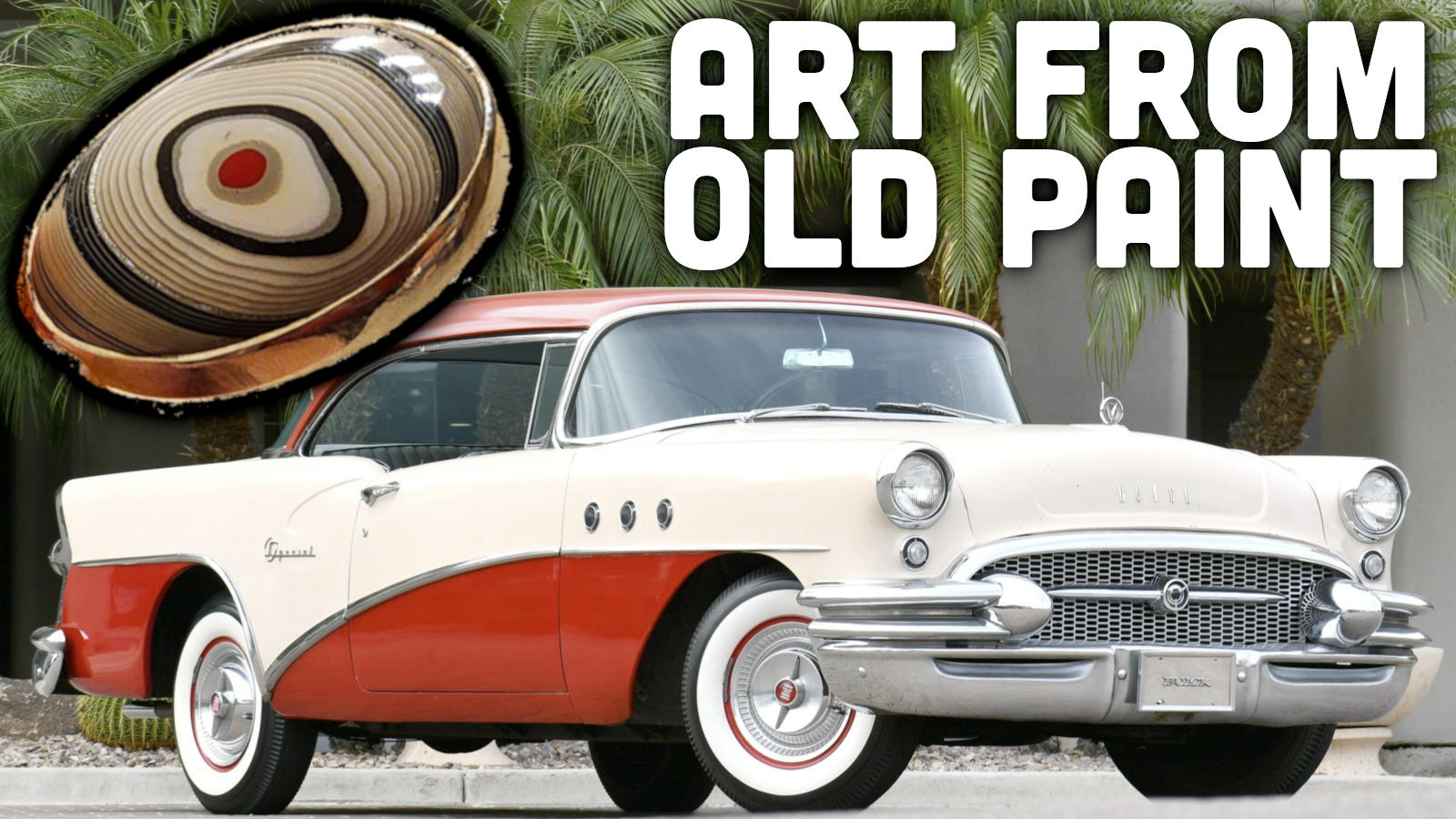 On Wednesday, my wife gave a present that was small, yet mind blowing. Out of a little baggie came a pendant, and its colors dazzled me. But what’s up with it? Sheryl loves giving me gifts with some sort of significance, and this just appeared to be a groovy necklace. This is actually a piece of “Fordite,” also known as “Detroit Agate.” It’s several layers of several decades-old car paint hardened into something almost rock-like, and it’s pretty amazing.

Somehow, I made it 30 laps around the sun. There was once a time when I couldn’t fathom completing my 20s, let alone making it to 30. But some wonderful events in life corrected my course. I have a lot to thank for that, including finding my own way to writing about the silly adventures that I subject myself to. Those adventures all helped me become the person I am today, and turning 30 Wednesday marked a personal milestone. Now I’m ready for the next 30 years and beyond! My darling wife, Sheryl, showered me with unique gifts for the occasion. She sourced a recreation of a Master Systems Display from the USS Voyager from Star Trek: Voyager. I also got a set piece from Star Trek: Picard and some other goodies. Then came this little gem.

What you’re looking at is a piece of Fordite, but it’s also sometimes called Detroit Agate (like I said before), Motor Agate, or Motor City Agate. Calling them agates–stones formed within volcanic rocks where silica-rich water percolates through and minerals crystallize–isn’t entirely correct; they just look the part. In fact, Fordite isn’t forged over thousands of years in volcanic rocks at all, instead, it involves how the automotive industry used to paint cars.

Urban Relic Design, a supplier of Fordite, notes that the material was created several decades ago during car painting processes. Paint chemistry and application have evolved through the history of the car. A century ago, a car would get an oil-based paint, applied with a brush. As industry magazine BodyShop Business writes, paint spray guns have existed since 1887, but the first car to get painted with a spray gun was the 1924 Oakland. Chemist Edmund Flaherty at DuPont invented Duco, nitrocellulose dissolved in a solvent, enhanced with plasticizers, and able to be sprayed.

This painting process would spread and by the 1930s, automakers were coating cars with nitrocellulose lacquer and alkyd enamel. These paints would be applied in a downdraft spray booth then baked in an oven for hardening and curing.

This process resulted in racks, skids, and conveyors getting covered in overspray. That overspray would then get baked in the oven alongside the car. This process would repeat, as a new car would come in and get painted in a different color. Over time, this created layer upon layer of colorful paint overspray buildup on equipment. Eventually, the paint built up into a rock-hard, multilayered and multicolored mass of acrylic. This sort of “enamel slag” would get removed from equipment and discarded. Some of them were possibly 100 layers thick.

Paint processes evolved, as have the paints themselves. Perhaps the coolest part is that Fordite reflects the time in which it was created. Fordite from very old vehicles might have more brown or green in them. But Fordite from the 1960s and 1970s might come in bold and bright colors, reflecting the vehicle colors of the day. And you might even find metallic colors embedded in Fordite rings.

Yep, that means that you could get Fordite in famous vintage colors like Mopar’s Plum Crazy, AMC’s Big Bad Orange, or Ford’s Anti-Establish Mint.

As I said before, a lot of this paint buildup was trashed. However, at some point, a lightbulb flickered on in someone’s head and the material found a second life. It’s not known exactly when or who came up with the idea, but it was discovered that the discarded material was actually hard enough to be formed into jewelry, and polished into something incredible.

Cindy Dempsey, the owner of Urban Relic Design, says that she first discovered the material in the 1970s. A family friend who worked in car manufacturing brought a piece of what he called “paintrock” over, capturing Dempsey’s interest. She didn’t like that name, and decided to name it like one of her favorite stones, applying the “ite” suffix to “Ford.” Dempsey found that when you sanded through the surface layer of the material, it looked a lot like a real, naturally-occurring agate.

It should be noted that the term “Fordite” has no official relations to Ford. The material came from all sorts of factories, from Ford, General Motors, and Chrysler, to Harley-Davidson, Kenworth, and more.

Sheryl won’t reveal where she got my Fordite, but she says that the supplier claims it came from the 1950s. It’s not known which car factory mine came from, but it seems that black and white were popular colors for this sampling. What I love is that a couple of bands appear to be metallic silver.

And on the backside, there are some browns, some red, and more metallic.

That’s the other cool thing about Fordite; every piece is unique. And it might become rare someday. As the American Coatings Association notes, the 1980s brought a major change in how cars are painted. Lacquer topcoats weren’t known for their durability, and auto manufacturers were looking for a way to increase paint endurance. At the same time, the Environmental Protection Agency began limiting volatile organic compound emissions. Painting processes changed, including water-borne base coats and two-part, self-curing polyurethane clear coats. These materials are electrostatically-applied.

Painting a car in the modern day is a pretty awesome process, check out this video from Toyota UK going over how the process worked in 2013:

These modern painting processes have given us better paint, and it also means that the huge overspray build ups are a thing of the past. Fordite suppliers say that paint changes of the 1980s means that the fordite “mines” are now dried up. Thus, there is a finite amount of the material left. Exactly how much isn’t known, as who knows how many collectors are sitting on batches of the stuff. As of now, you can buy all kinds of jewelry from a number of suppliers. Heck, you can even buy huge chunks of fordite to do whatever you want with.

But, I will warn you, this stuff can run you a few hundred dollars just for a piece of jewelry, and I have to think it’ll get more expensive as time goes on.

While Sheryl got my piece expecting me to wear it as a necklace, I’m actually going to store it in my display case of my favorite car artifacts. This stuff is just too cool for me to end up losing while off-roading, or inevitably torn up by my adorable, yet destructive conures (basically mini parrots). Can you get some fordite in time for Christmas? Maybe. But honestly, fordite is cool enough to buy any time of year.

Mercedes is a lifelong fan of all things powered by an engine. When she isn't driving one of her five Smart Fortwos or her 14 other vehicles she could be found in the cockpit of a Cessna 172 or perhaps swimming in any body of water that she could find. She also has a deep love for buses of all kinds. Please send her buses. mercedes@theautopian.com Instagram: @mistymotors Twitter: @Miss_Mercedes30 Facebook.com/neonspinnazz
Read All My Posts »
PrevPreviousHow My $700 Chevy Tracker Got Stuck On Flat Solid Ground
NextHow My Changli Inspired A Man To Start Selling Cheap, Low-Speed, Street-Legal EVs In The U.S.Next