How My $700 Chevy Tracker Got Stuck On Flat Solid Ground

I’ve gotten cars stuck hundreds of times in my life, sometimes in snow, sometimes on ice, sometimes in mudpits that destroy my engines, but usually in grassy yards that I turn into muddy yards that reduce property values. But yesterday I got my $700 Chevy Tracker stuck on completely solid, flat ground — and that makes almost no sense. I looked like an absolute fool to my neighbors and to passersby — and I mean more of an absolute fool than typically.

Before I even begin this blog, I have to address Project Cactus, because many, many people have been asking about that dilapidated ute I flew all the way to Australia to attempt to fix. A new episode is coming NEXT WEEK, and then the finale will run on Christmas day. I know, that’ll be almost three months from wrench to screen, but we’re doing our best! And it’ll all be worth the wait, I promise!

With that out of the way, here’s a bit of an update on things: I’m back from Los Angeles, where I covered the (rather lively) LA Auto Show for two weeks, not long after talking with #brands at SEMA to see if we can figure out some partnerships that make sense. (I’m really pushing for my drink of choice, PB Blaster). I also may or may not have found a place to live out in LA, despite not having a real plan of execution for my move from Detroit. A shitshow is brewing on that front.

Anyway, upon my return here to Michigan I had to drive somewhere to eat breakfast at 5 P.m. (my house is devoid of any sustenance, and things here at The Autopian are so busy I didn’t have time to step out until late). As the streets have been salted due to a recent snow, I broke out my winter beater, my beloved $700 Chevy Tracker. 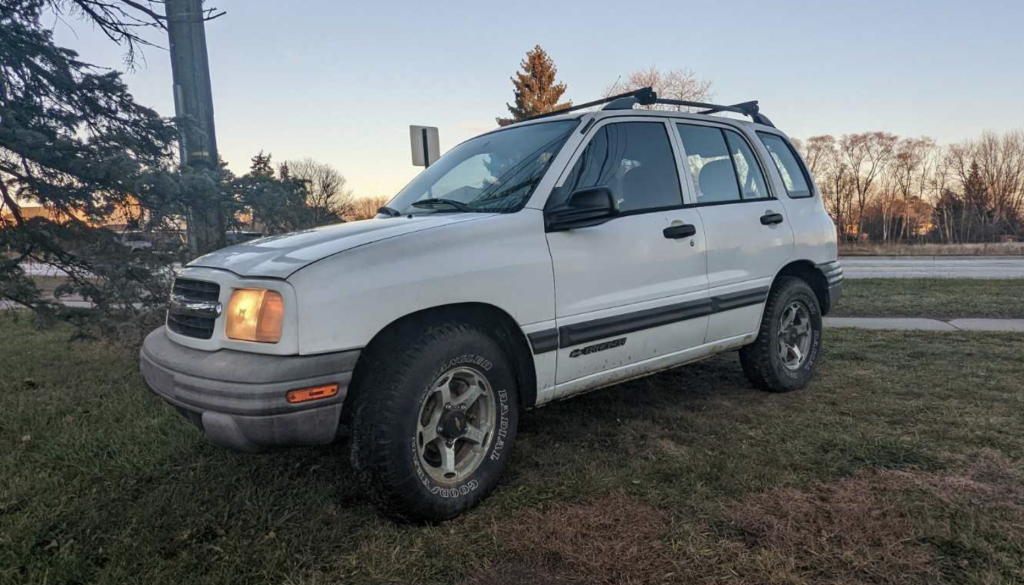 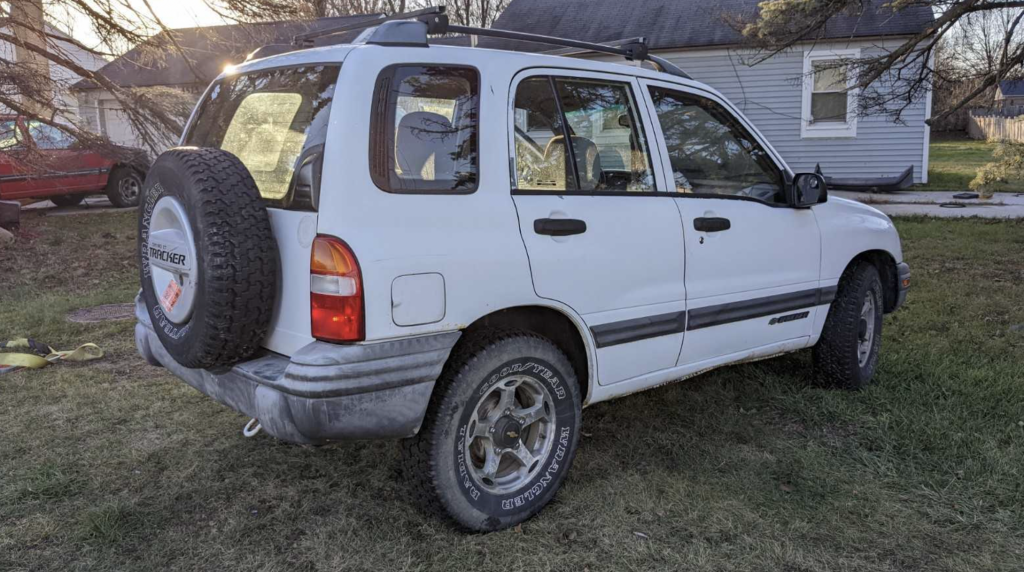 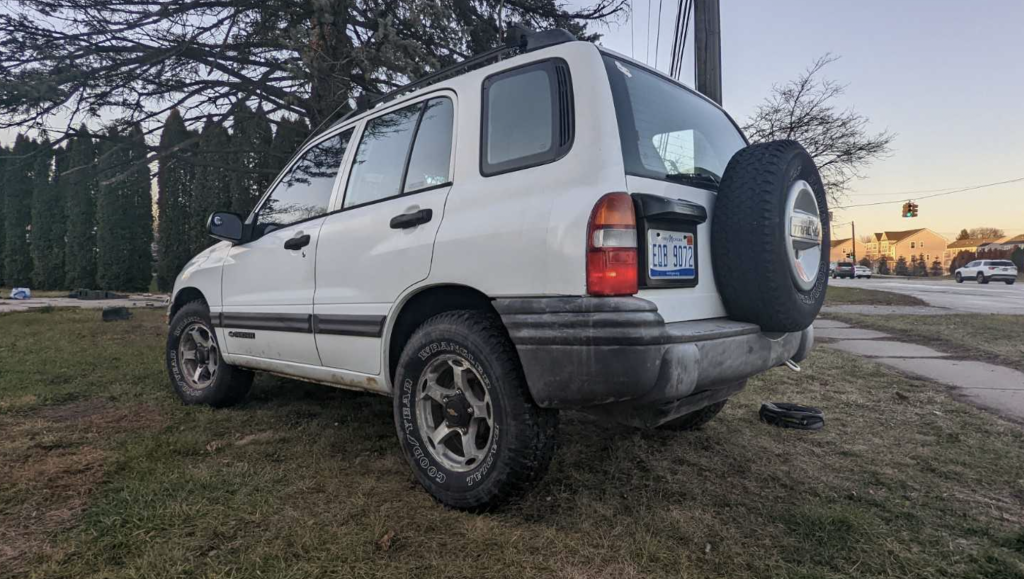 I fired up the 177,000 mile J20A four-cylinder motor, popped the five-speed manual into reverse with my left foot on the clutch, depressed the gas pedal a bit, then let off the clutch. There was no motion.

“What the hell?” With my left foot on the clutch, I grabbed the gear shift, shoved it into first, then back into reverse and made sure it was really in gear. I let off the left pedal again with my right foot on the gas — “whirrrrrr.” That was the sound of a spinning tire, a noise I’ve heard all too many times. It was coming from the right rear: 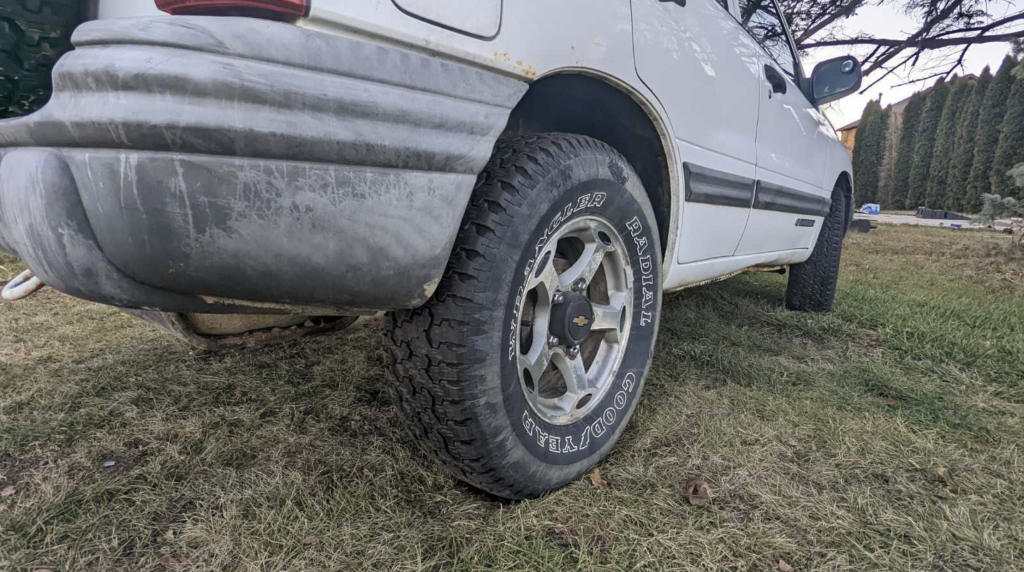 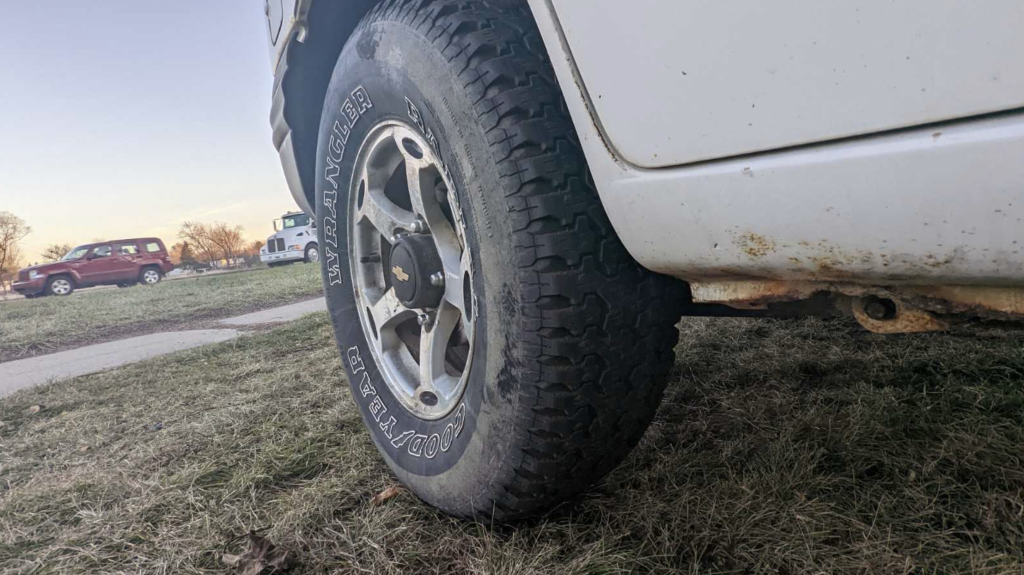 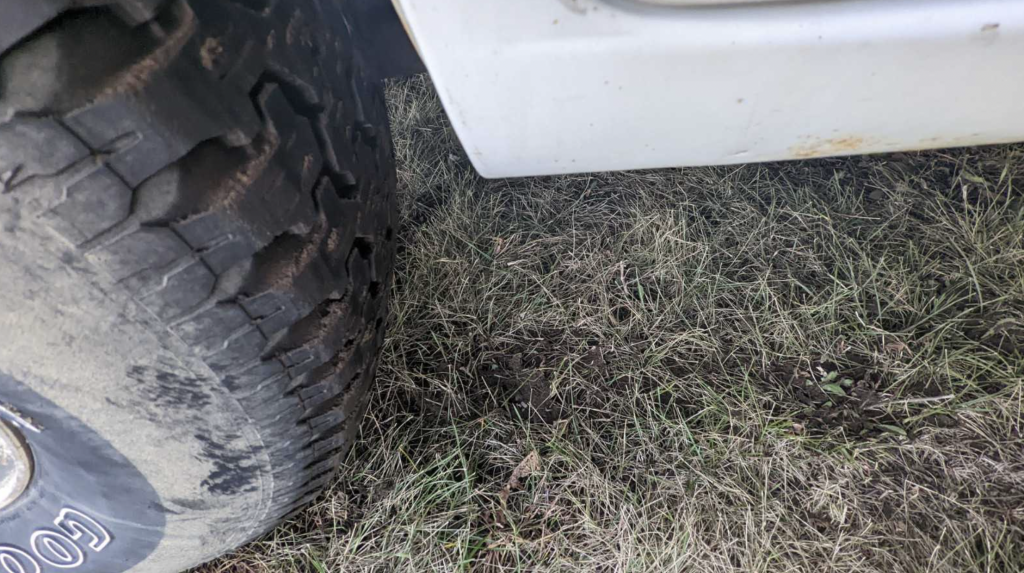 I didn’t recall there being a mud pit in the front yard, so my first thought was that one of my tires had gone flat from sitting, and that my wheel was just spinning inside my tire. Like this:

I’d had this happen before. I hopped out of the little Suzuki-badged-as-a-Chevy, and did a full 360 around the little off-road brute. All the tires looked fine, and what’s more, they were all sitting on solid ground! I stepped right next to the tires, and the grass was neither icy nor wet. I hopped back into the Suzuki, popped the shifter into reverse again, and tried accelerating. The tire just shot up a plume of steam as its tread heated up from friction against the ground: 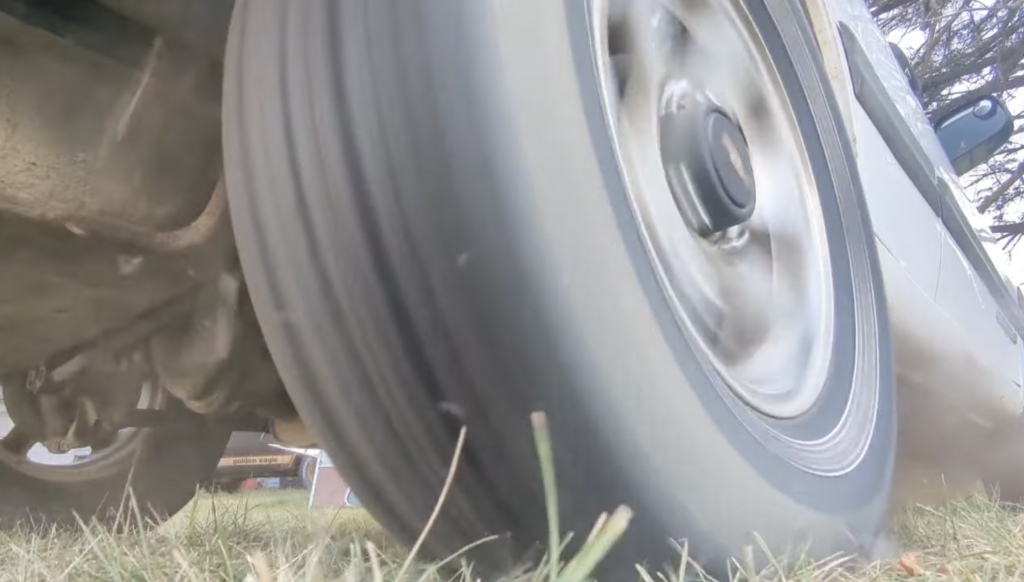 That little four-cylinder engine revved to the sky, its rusted-out exhaust making a racket that the neighbors could likely hear over traffic on the road out front. There I was, sitting in a car, stuck in my front yard, which was completely flat and solid. I must have looked like a complete fool.

“Maybe someone’s messing with me, or maybe I forgot to take this thing off a jack stand?” I questioned. But no, there was nothing under the car: 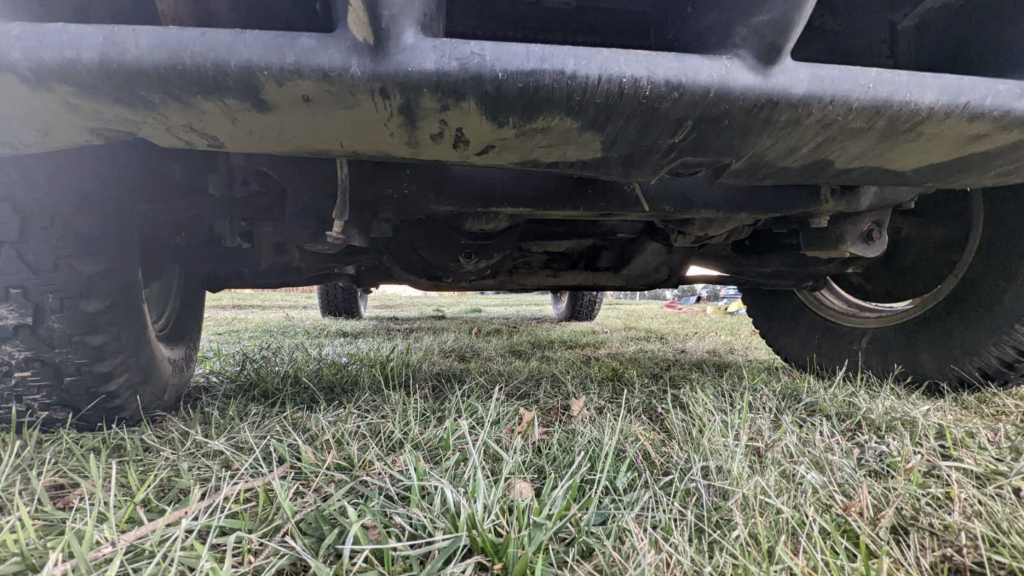 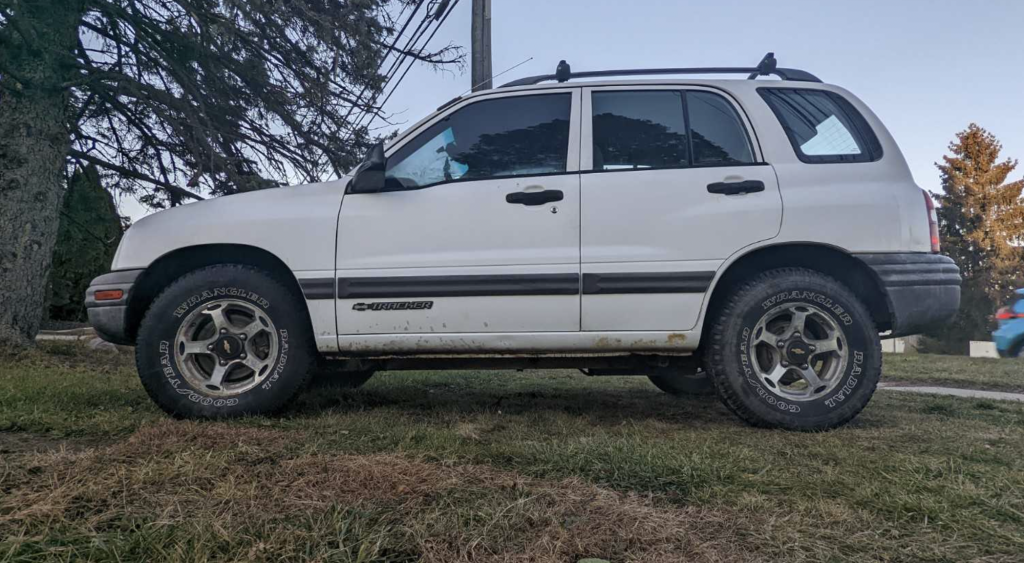 Here’s a video of the bizarre situation:

After a few attempts to reverse out of my yard, I heard a “POP!” followed by the vehicle rolling rearward. This made it clear to me what had happened: My left rear drum brake had seized, either from just sitting for the past few weeks, or from all that mud and water that I’d driven through during a recent off-road trip freezing in there and locking everything up. In any case, that left rear brake was causing so much drag that the right rear wheel — which, because of the nature of an “open differential” design, spins despite the left wheel remaining stationary — didn’t have enough grip to get the Tracker moving.

(To be clear, I could have put the vehicle into four-wheel drive, and that’d have solved it. The only issue is that the blood pressure bulb that actuates the front axle is filled with mud from my recent off-road trip, so it’s not working right).

This situation is, of course, a good excuse to link my favorite tutorial on how an open differential works:

The short of it is that wheels on the same axle can rotate at different speeds (and indeed, that’s the main advantage of an open diff — it allows your outer wheels to spin faster so the car doesn’t “hop” around turns), but they receive the same amount of torque, and that’s limited by the wheel with the least traction. This means that, even if I had given my Tracker “the beans” and revved it to the sky, that spinny wheel with less “traction” (that’s in quotes because we’re talking about a seized brake here, not the type of tire-ground traction you normally think of) is only get as much torque as the surface allows, and the thrust from that torque isn’t enough to move the car against that immovable wheel held in place by a stuck brake. Giving the Tracker gas won’t help much to break the brake free, since the immovable wheel’s maximum torque is limited by the spinny wheel’s traction.

Anyway, this is a pretty random little blog; I should sell this Tracker before it actually breaks.

Rust-loving Jeep man, cofounder and EIC of The Autopian, Jason's friend. Email: david@autopian.com
Read All My Posts »
PrevPreviousBritish Car Insurers Busted For Undervaluing Crashed Cars, Like Cheapskates
NextJewelry Made Of Leftover Paint From Old Car Factories Is Fascinating And Beautiful. Check Out My New GiftNext