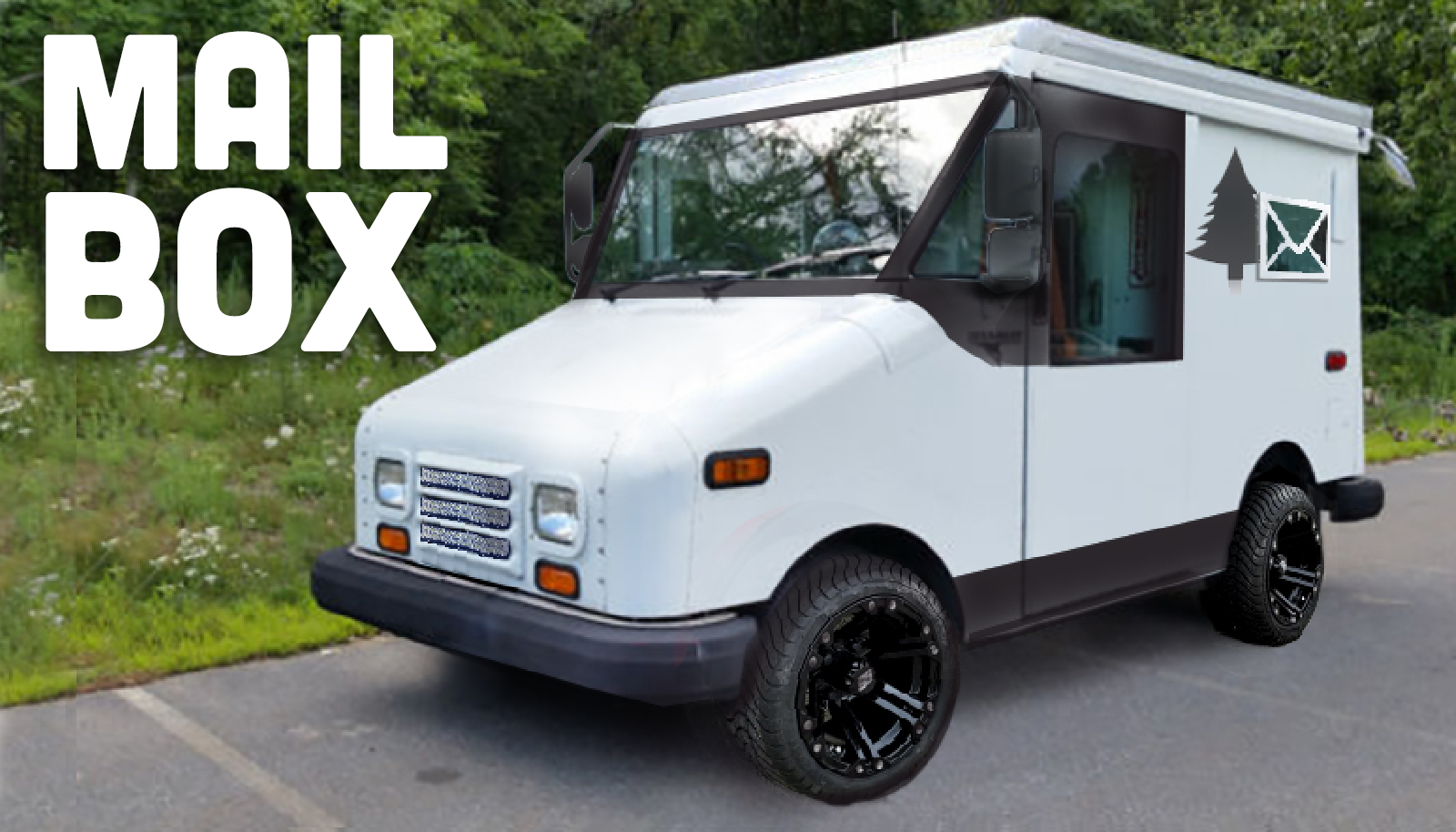 There’s a timeless quality to all-aluminum recreational vehicles. Even if you look beyond the light weight and almost matchless durability, there is something iconic about the exposed rivets, the rounded corners, the sliding doors you can hang out of while driving..

Yes, I said sliding doors. Did you think I was talking about an Airstream? No, I’m referring to something equally iconic and soon to be extinct: the Grumman LLV. Yes, I know it’s a US mail truck and not a camper, but I will fix that.

Much has been written about the Grumman LLV (Long Life Vehicle) mail trucks; our own Autopian staff has gone into great deal about its history, details, and even a strange alternate reality; I highly encourage you to click on the links and waste precious work time learning more. I won’t take the deep dives they have done, but this ubiquitous vehicle was made between 1987 to 1994 by defense contractor Grumman, a company that also made civilian products like canoes. With aluminum bodies and durable chassis components and ‘Iron Duke’ engine from a Chevy S-10 truck, the 100,000 or so built seem to have lived up to their ‘Long Life’ name. 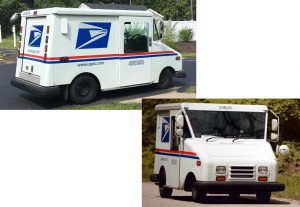 It’s hard to believe that the last LLV left the factory almost thirty years ago, yet they’re still out there roaming the streets. They’re part of the fabric of suburban living, taken for granted by almost everyone except for superfans like our own Mercedes Streeter or my oldest kid who, when still thumb sucking, demanded things like LLV Christmas tree ornaments and ‘to be a mail truck’ for Halloween, which is not something you can go to Party City and purchase: 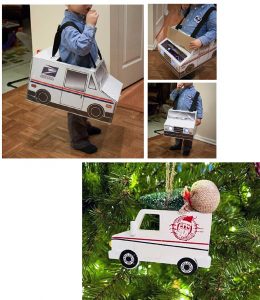 While the aluminum bodies of LLVs typically in the same condition they were thirty years ago, the moving parts of most are not faring as well. Mechanics are supposedly getting sick of patching them back together, and you’ll often hear the awful blatty exhaust sound of the one in your neighborhood approaching before you see it come around the corner. The LLVs were all supposed to be out of service years ago, but the search for a replacement vehicle has taken much longer than expected.  The new mail truck, made by Oshkosh Defense, is finally arriving, so the days of the LLV are finally numbered.

The fact is in today’s litigious society the government will likely choose to crush all of the remaining LLVs. Despite many being in such poor condition, it does seem a shame to destroy something that is such a part of our history and that was finely crafted (at least the body) by an aerospace firm out of such durable materials. My parents recently got rid of a Grumman canoe that was purchased by us new, run through rocky streams, sat outside for forty years, and was still in identical condition to the day it was brought home. It’s like when you replace a harvest gold colored 1976 refrigerator in an old house with a brand new one that runs for just a couple of years before it shoots craps.

Anyway, let’s take a look at this thing: 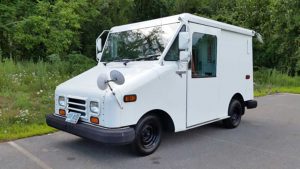 What could be done? Well, the overall shape and size seems ideal for a ‘van life’ style camper. It’s boxy and has maximum interior space for its exterior size. Also, the mechanical parts could be upgraded in stages from refurbished current parts up to electric power- it could be ready for the next thirty years.

[Mercedes Note: The Bishop surprised me with pictures of his ideas for what to do with all of the Grumman LLVs that may soon no longer have a job. As I’ve said before, the Grumman LLV is a dream vehicle of mine. I’d love to just use one as a small mobile motorcycle garage and drive around with the sliding door open. I have visions of my foot propped up in the open door like I’m driving a Jeep. But an LLV turned into a camper? Woah, that’s an even cooler use!]

Outside, I’d want to keep it mostly stock. I’ve seen bare aluminum ones and it just doesn’t work- the trick is to keep the classic mail truck look. I did black out the metal around the windows to make it more ‘Cybertruck’  than cobbled-together-Government-job in appearance, and rocker panels to try to visually tie in the bumpers. I stripped off a few of the mirrors, added new wheels, and on electric models you could add more lights up front into what were the radiator grille openings: 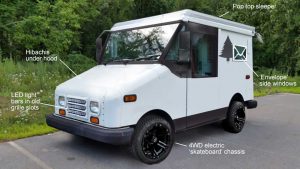 The space in back of an LLV does not allow you to stand up, but that’s no different from a Ford Transit Connect or other ‘Van Life’ vehicle. The space can be configured with a ‘kitchen’ on one side with a tiny sink, cooktop, and cabinets above. Opposite this would be a large ‘couch’ where the center cushion could become a small table. There’s another seat next to the ‘kitchen’ that can also become a table or worksurface.

These items could be reconfigurable; you could even add a toilet module if you chose to. 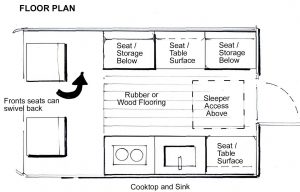 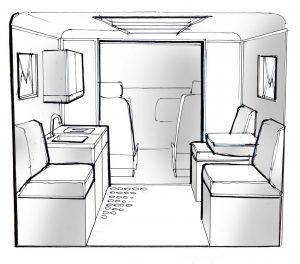 You could sleep on that couch, but why not pop the top for a large sleeping area? An access opening (with fold down ladder) allows you to get to this space without going outside of your camper and risk people seeing you naked or bears consuming you.

The rear sliding door would block roof access so it’s replaced with a bump-out featuring a standard door with a screen option. Torch detail: note that LLVs have an extra set of blinkers at the top of their rear light clusters, independent of the rear signals. These would be replaced by two ‘porch light’ outdoor lamps. 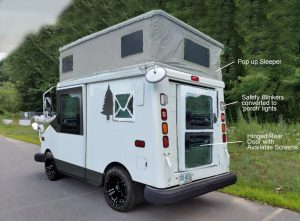 Extra light comes into the space through plexiglass side windows shaped like mailing envelopes. The ‘flap’ of the envelope opens for light ventilation or the whole ‘envelope’ can tip outwards. 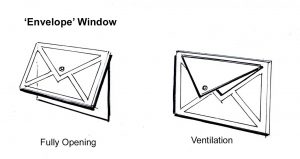 So we have the overall design, but what about those mechanicals that have been slammed around suburbs every day for the last thirty years? As I mentioned earlier, I see two approaches to that, or stages if you will.

Phase 1 would be a mechanical refresh. Considering that the LLV was based on GM’s popular S10/s15 trucks, parts are readily available to get one back in shape. Plus, after three decades the common problems are known, and well-known fixes and improvements could be implemented. The same goes for the ‘Iron Duke’ four cylinder engine under the hood, though I do wonder if adding an upgrade, like the popular 4.3 liter V6 from the time, would be a worthwhile improvement.

Phase 2 could happen now or years from today, considering the durability of the LLV body. This solution involves ripping out most of the old mechanicals and adding a full electric chassis, something like a ‘skateboard’ all-in-one battery and motors unit that could slip under the old body. There are companies offering these kind of things now, and converting 100,000 LLVs might be a good boost to their business. This chassis-under-a-chassis might lift the height of the truck a bit, but I am imagining a dual motor four wheel drive system so the extra height will be ideal.

The all-electric version would have the engine compartment empty and available for other uses, be it cargo, shrimp on ice, or even twin hibachi-style grilles. The grille idea would be outstanding, but you’d need to change the hood to steel if it’s gonna act as a lid. 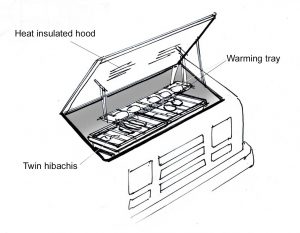 Sadly, it seems like the optics of such an option might be bad, considering that recently a number of time-worn LLVs have become engulfed in flames (but a refurbishment should prevent that possibility). 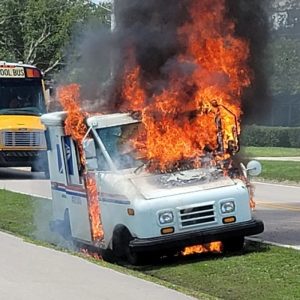 Is this a lot of work to preserve something obsolete? Is it better that it might be left to die? Possibly, but you could say the same thing about old trolley cars, Piper Cubs, or even SJ Grand Wagoneers (and you KNOW how much those are worth today).

I promise you that thirty years from now a 2023 Ford Transit Connect will be a pile of brown rust dust while the body of an LLV will still likely look exactly the same as it does today. You might find that despite being obsolete in many ways, some objects have intrinsic qualities that make them worth saving.