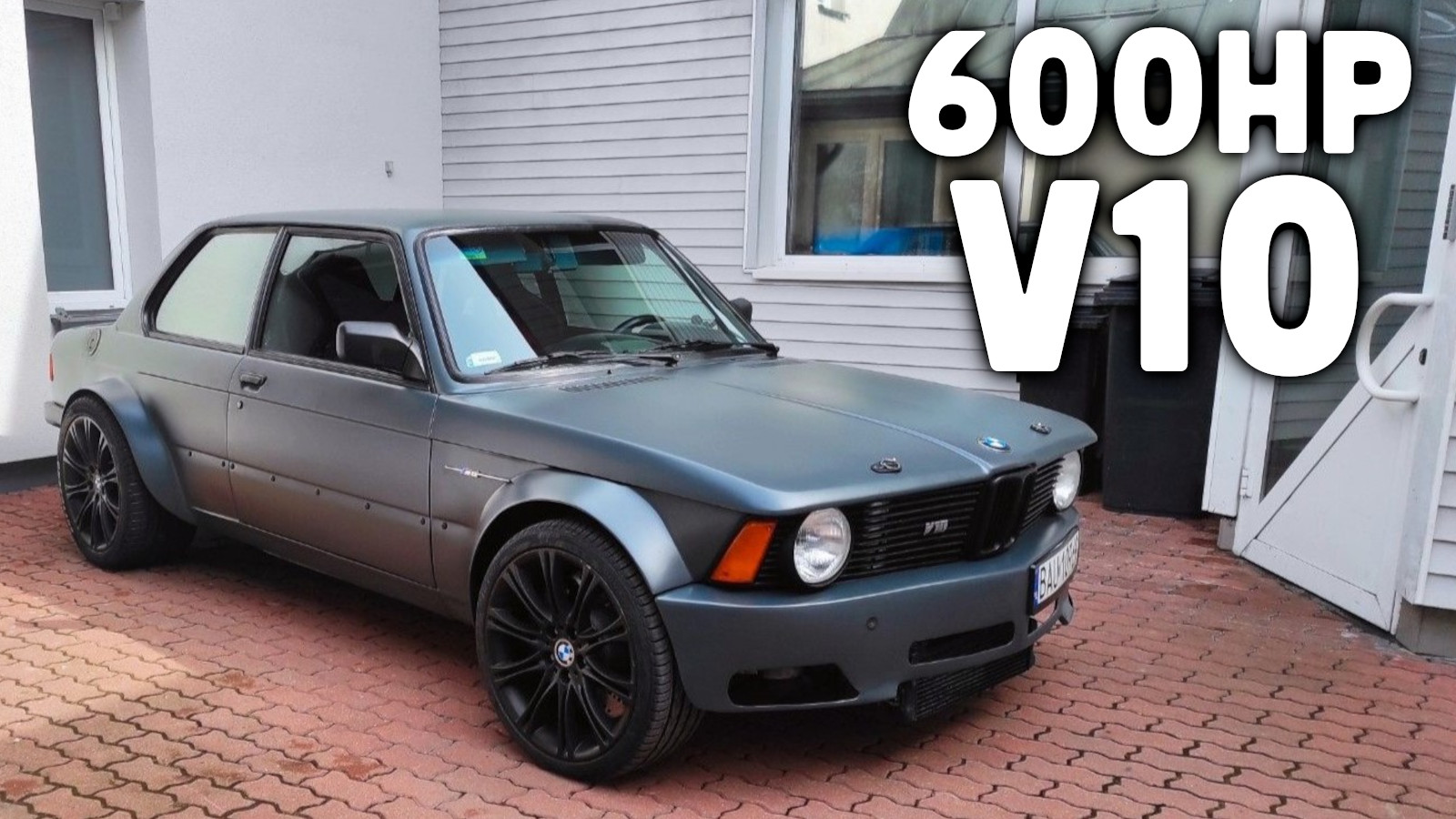 I’ve been bitten by the BMW bug. Since picking up a manual BMW X5 and the Bishop’s E39 5 Series, I’ve been falling into the rabbit hole of fangirling over “The Ultimate Driving Machine.” I see why BMW has such adoring fans and now, like how I did with Volkswagens, I’m looking for the dumbest, best BMWs to have ever graced this planet’s roads. This morning, I found not just a bonkers BMW, but just a wild car build in general. A shop took the 5.0-liter, 500 horsepower V10 from a late 2000s BMW M5 and crammed it into a 1983 3 Series. Then they cranked the power up to 600 horsepower.

BMW’s M division has produced some epic cars throughout history. Founded in 1972, BMW Motorsport GmbH started producing hits right out of the gate. In the early days, there were greats like the BMW 3.0 CSL and the M1. And later, cars like the BMW E30 M3 would excite enthusiasts. E30 M3s remain insanely popular today and people will pay frankly insane money for one. I mean, the E30 M3 is so cool that I’d probably be among them if I had the cash.

However, the E30’s predecessor, the E21—actually the first car to be called a 3 Series—seldom gets much love, for reasons I’ll soon explain. But all of that is nothing a good V10 can’t fix, obviously.

The E60 M5 marks an interesting point in BMW M history. Launched for the 2005 model year, this nutty thing features the first and the only V10 engine that BMW has bolted into a production car. And it’s one of the only V10 engines that you’ll find in a sedan, with the Volkswagen Phaeton V10 TDI being another notable vehicle. This beast was actually sold in America, too, which couldn’t be said for the V10 diesel Phaeton. BMW M Magazine describes the E60 M5 like this:

What a reputation! Tank’s too small, transmission’s too rough, in neutral it sounds more like a diesel than a sports car. And yet more people than ever wanted one. We’re talking about the fourth generation of the BMW M5 which came out in 2005. A personality with some rough edges.

When planning began for the fourth generation BMW M5, there was no question it was time to boost the engine’s power beyond its predecessor’s 400 hp. The new M engine became the means to an end. In racing, 333 cubic centimetres per cylinder are considered the golden measure; in a series engine, it’s 550 ccm. If we assume 100 hp per litre of displacement is state-of-the-art for an aspirated engine, we’d be looking at five litres displacement and ten cylinders, accordingly: a rarity among engines.

What further underscores the technological link to racing is that the engine blocks come from the same foundry that makes engines for Formula 1. The 507 hp, however, does not just pay homage to one of the most expensive BMW cars, it’s a nod to the US American measurement of performance. At an even 400 hp in Europe, the predecessor remained stuck on the main sales market in the USA with an equivalent of 394 SAE hp. The new M5, however, was able to get a top performance ranking in the States as it made it into the jaw-dropping 500 SAE hp range.

That’s right, under the hood of the E60 M5 sat a 5.0-liter naturally-aspirated V10 making 500 HP and 384 lb-ft torque. MotorWeek found the E60 M5 able to accelerate to 60 mph in as quick as 4.4 seconds. And it was wrapped up in a sleek sedan or stately wagon package. But if you want to go for vintage vibes, that V10 makes a lovely swap candidate.

The seller doesn’t explain how this came to be, it appears to be the work of Osewski Motor Sport (OMS) in Augustów, Poland. This BMW tuning shop decided that this magical drivetrain needed to be in a first-generation 3 Series.

Launched in 1975, the E21 3 Series had big shoes to fill. It replaced the BMW 02, which produced greats like the famous 2002. This new car was tasked with maintaining the sporting characteristics of its predecessor while improving on comfort, safety, space, and style. The E21 certainly nailed it on style, featuring a prominent kidney grille and Hofmeister kink. BMW even contoured the hood into what it calls the “power dome.” Accompanying these upgrades was an array of engines, including what BMW calls the first six-cylinder engines in its class. Indeed, you could get a 315 with a 1.6-liter carbureted four making 75 horses, or splurge for a 323i with its 2.3-liter fuel-injected six making 143 HP.

E21s are overshadowed by more popular generations like the E30, but here’s an E21 that could probably take the E30’s lunch. While the inspiration for this isn’t said, the seller says that it was done from scratch. The E60’s V10 takes up all of the E21’s engine bay, and it’s said that we’re not looking at a stock setup here. The seller says that this car is making 600 HP. It’s said that the car has an ECU tune and a custom, catless exhaust, but it isn’t said if anything else was done to pump the engine up to this output.

Thankfully, they do offer more details and they are pretty awesome. The seven-speed SMG-III transmission makes it over, as does the front and rear suspension and all systems. Yep, that means that this car has working ABS, traction control, and stability control. The seller says everything from the E60 M5 made it over, including the interior.

Looking inside, the E60’s interior incredibly blends fairly well with the E21’s door panels. Well, about as well as they could considering the decades between them.

Once again, the seller says that everything works here, including the active exhaust system. It seems that this car is more or less an E60 M5 wearing an E21’s body. You can even see M5 wheels poking out from the car’s custom wide flares. It looks like the build has been around since at least 2014, and perhaps built by

The build has about 70,382 miles (113,270 kilometers) on it, but it isn’t said if those are the miles on the body or the drivetrain. Though I wouldn’t care, I’d just love to see how quickly this thing converts its rear tires into smoke. In fact, here’s an interior video of the car seemingly doing just that!

As for getting it into the United States, that could get tricky. In the past, I reached out to importers about how importing an engine-swapped vehicle would work, and the answers were mixed. Some said that so long as the base vehicle was old enough it would be fine. Others said that the swapped engine needed to be at least 21 years old to satisfy the EPA. Of course, this engine was sold here in the E60 M5, so perhaps you’ll need a letter from BMW. If you’re interested, you can buy it from German car marketplace mobile.de. Incredibly, it has a valid MOT inspection and insurance!

Even if it can’t come here, this is just too cool not to drool over. As if you need any other reason to love this thing, watch it accelerate away from a camera. I hope you get a chill down your spine like I did!

Mercedes is a lifelong fan of all things powered by an engine. When she isn't driving one of her five Smart Fortwos or her 14 other vehicles she could be found in the cockpit of a Cessna 172 or perhaps swimming in any body of water that she could find. She also has a deep love for buses of all kinds. Please send her buses. mercedes@theautopian.com Instagram: @mistymotors Twitter: @Miss_Mercedes30 Facebook.com/neonspinnazz
Read All My Posts »
PrevPreviousHow Our Daydreaming Designer Would Turn An Old Mail Truck Into An Amazing Mini Camper
NextHere’s A Sneak Peek At The Latest ‘Project Cactus’ Update: For Autopian MembersNext