While the Volkswagen Jetta GLI has always run in the shadow of its GTI brother, now might be its time to shine. Not only is it well-priced, it’s on the same MQB platform as the GTI and doesn’t have a center stack comprised entirely of haphazard touch-sensitive controls. To shine the spotlight on its hot sedan, Volkswagen has built a special GLI for SEMA — the Jetta GLI Performance Concept — and it includes bits from England and California. Check it out.

While the city of Milton Keynes may be better known for office buildings and startups, it also has some automotive pedigree. Red Bull’s F1 team is based there, as is Volkswagen U.K., so it shouldn’t be surprising that RacingLine hails from this pocket of Buckinghamshire. RacingLine may have started out as Volkswagen U.K.’s motorsports effort, but it’s morphed into a tuning shop offering all manner of bits for Volkswagen and Audi products, some of which have ended up on this GLI. 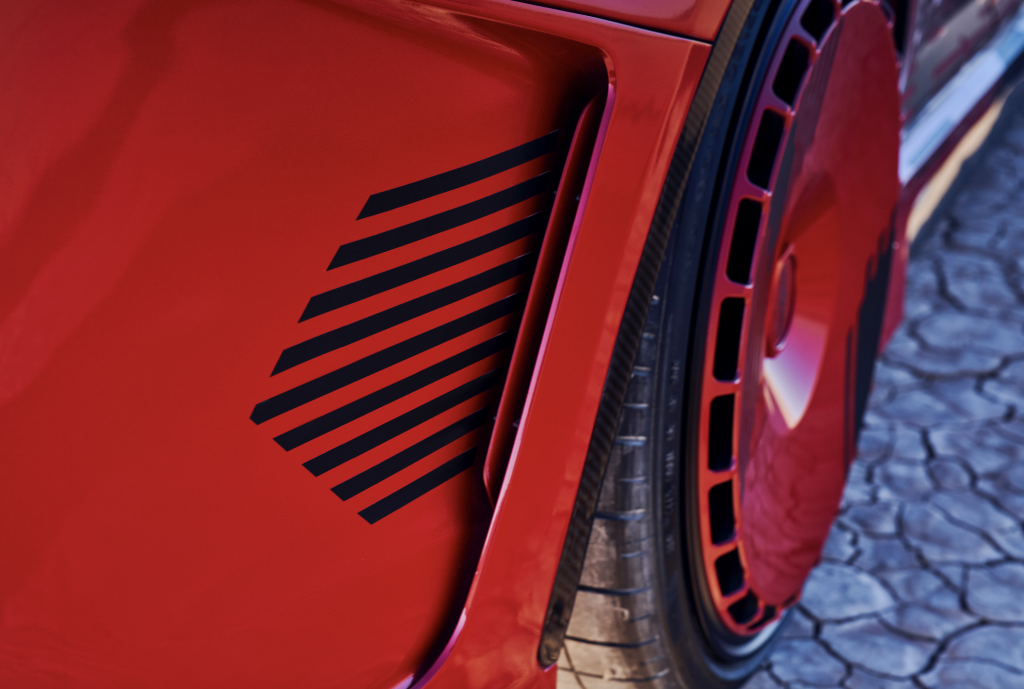 The build starts with a 2022 Jetta GLI Autobahn with a six-speed manual; powertrain wise, there’s a IS38 turbo from a Golf R that’s been reworked with new bearings and new turbine wheels. Frustratingly, Volkswagen didn’t publish any engine bay shots, but here’s a standard photo of an IS38 — because hardware photos are the best photos:

This bigger turbocharger breathes in through what RacingLine calls its R600 cold air intake, along with a bigger intercooler. The result is 350 horsepower and 372 lb.-ft. of torque — big numbers for a compact car. 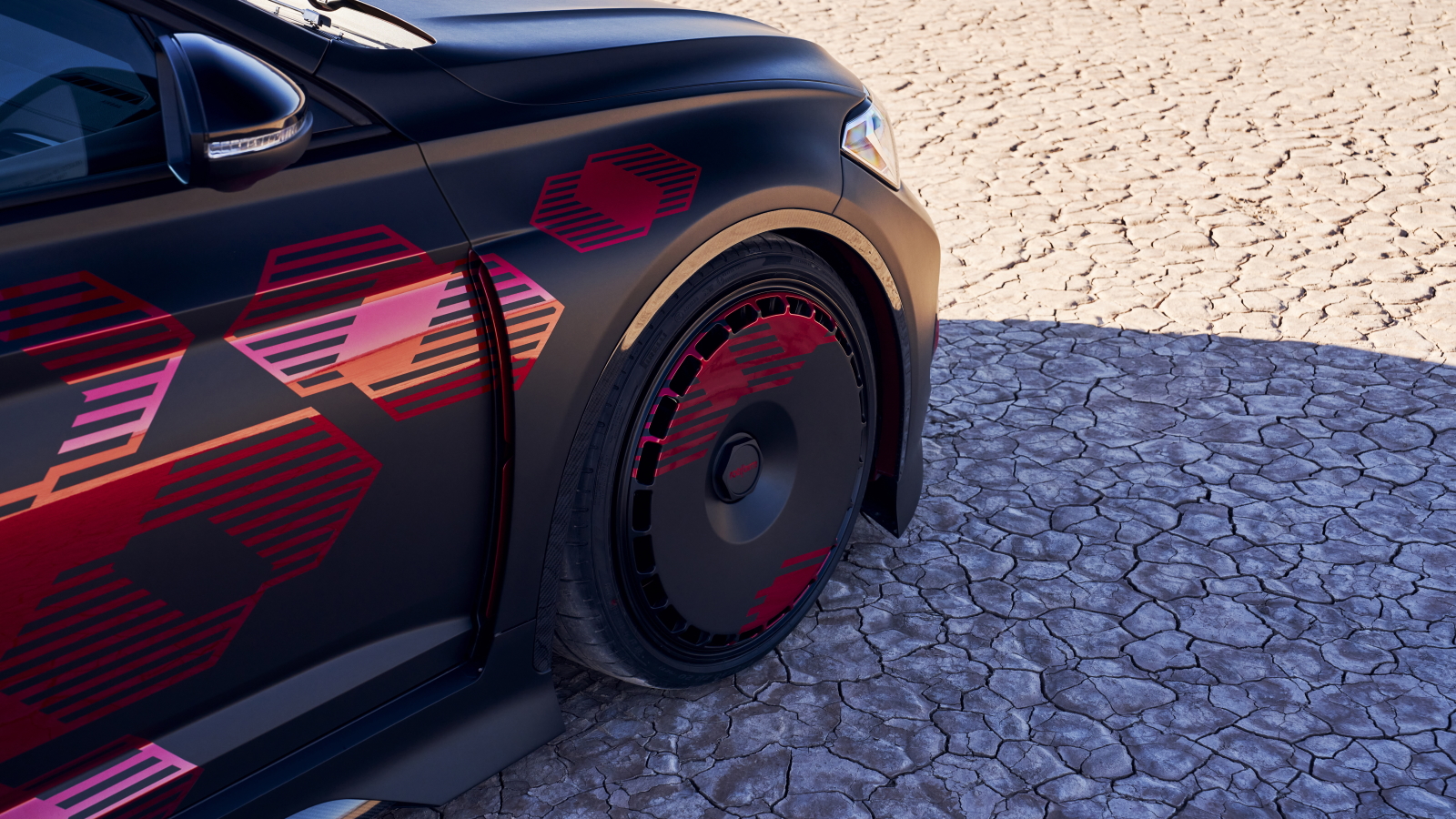 To support all this thrust, the clutch had to be upgraded, while RacingLine’s oil cooler kit should keep a lid on oil temperatures. The chassis has more bracing, while the brakes are now 15-inch carbon ceramic discs with six-piston calipers up front. Coilovers are common on SEMA builds, but the RacingLine Tracksport units on this special GLI seem better than most. Not only are the front dampers inverted, the top-mounts are fully-adjustable and the damper bodies are made from aluminum. Mind you, there hasn’t been any mention of tires, but they appear to be Pirelli PZero Corsas wrapped around some interesting Rotiform wheels. 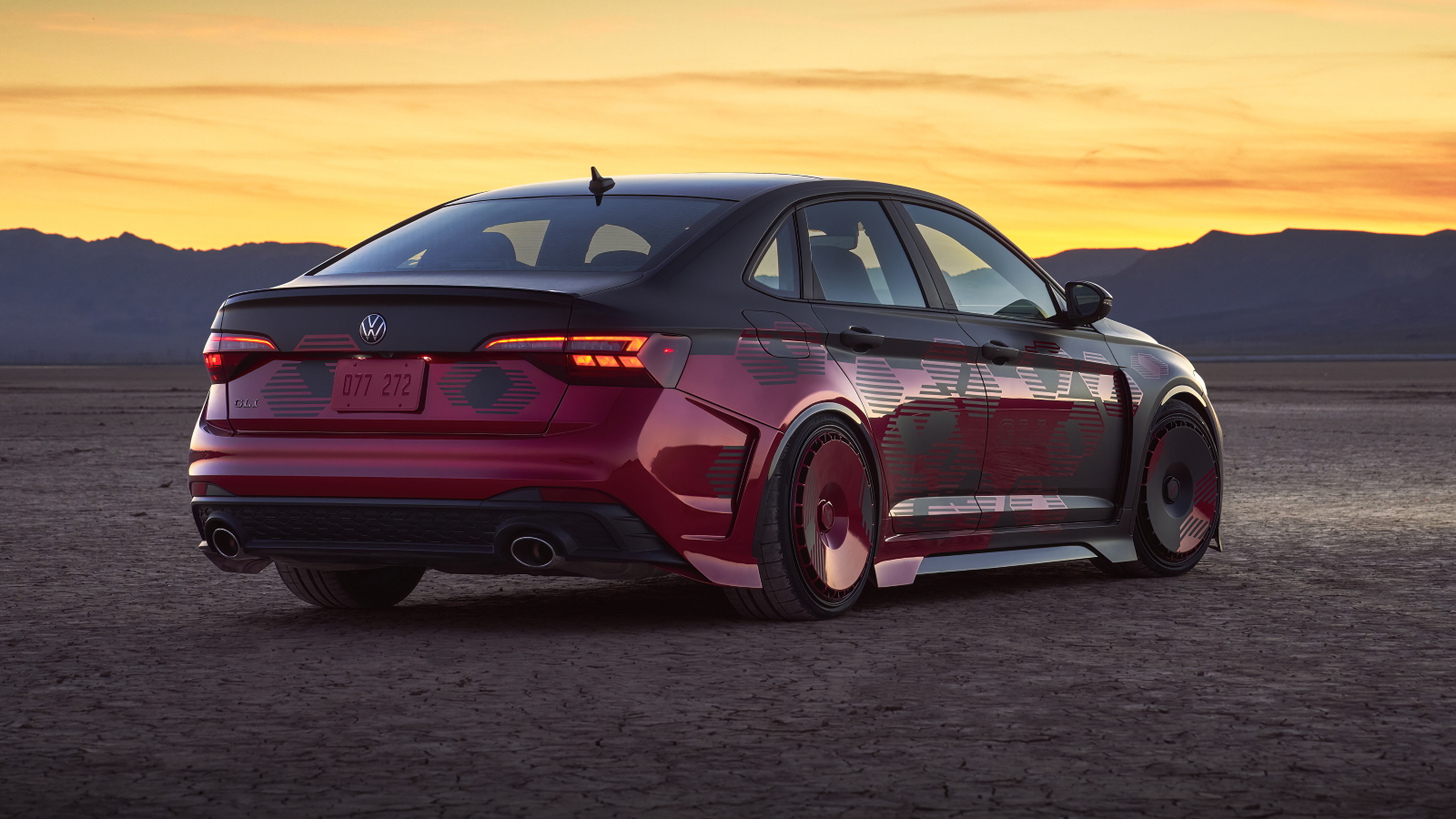 The forged Rotiform GRZs were likely chosen because of their screw-on hubcaps that can facilitate aerodisc fitment. Think turbofan-lite. However, because this is a SEMA build, the wheels are a bit wider than what a stock GLI body can handle. Time for Volkswagen’s Design Center California team to go on a power play, pumping the arches up by eight tenths of an inch over stock, then connecting the flared panels with the rest of the car through gracefully-massaged rear doors and a slightly 2005-esque set of custom side skirts. The front and rear valences also get a lift, with the latter incorporating a lovely set of twin exhaust tips. I’m not entirely sure about the rear bumper vents, but custom styling is always subjective. 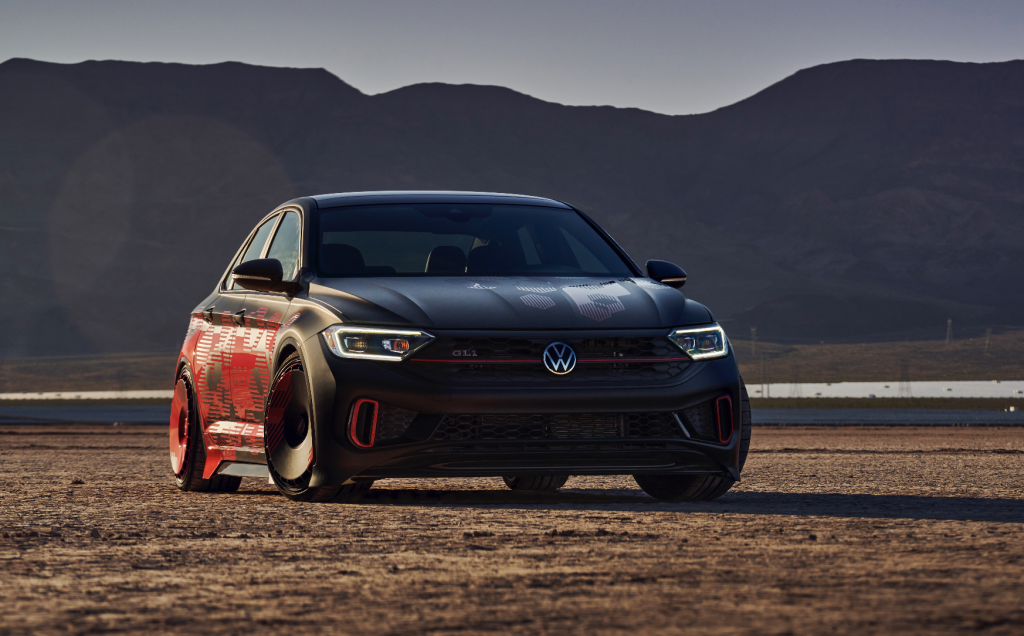 Speaking of subjective, you’ll think the vinyl wrap is either terrific or terrible, and I’m leaning towards the latter camp. The hexagonal motif is a neat concept, but the execution is like a kid just discovered the vinyl editor on Forza Motorsport 4. Plus, I feel matte black is a fairly stale color, and the Kings Redpaint underneath is quite a good shade. Mind you, I have nothing but lovely things to say about the Recaro Pole Position seats. The red hexagonal pattern and stitching looks retro in the right way and is a fun antidote to all-black interiors. 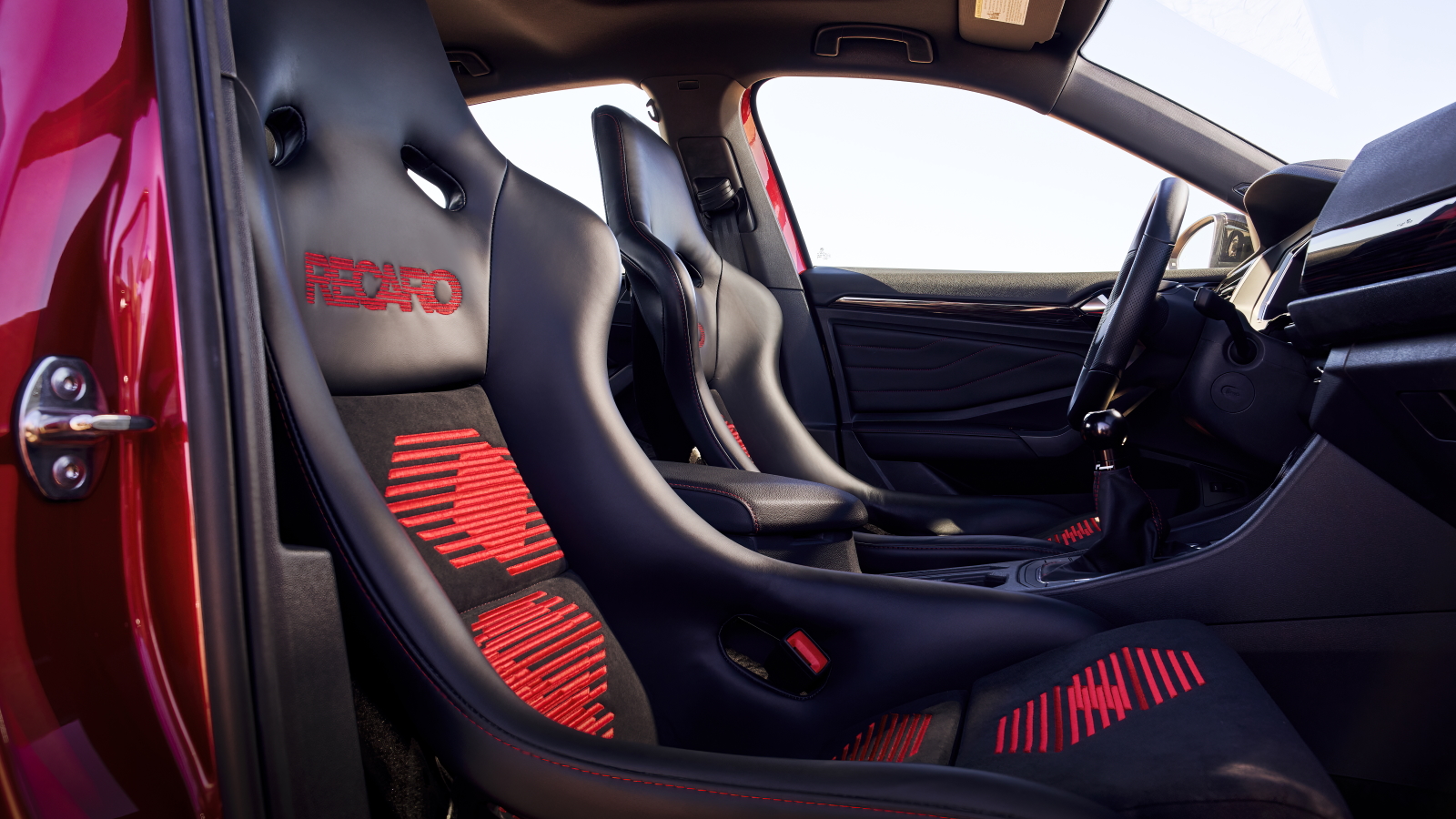 Apart from the cosmetic tweaks, it’s possible to put most of this Jetta GLI together in your garage at home, RacingLine sells its IS38 big turbo kit and coilovers, Rotiform will happily sell you a set of GRZs and aerodiscs, and Recaro offers its Pole Position seats in several different upholstery options including a lovely houndstooth pattern. What’s more, a similar GLI built at home will likely be even quicker than Volkswagen’s show car. RacingLine touts an awesome 480 bhp from its turbo kit — plenty of shove in a compact car.

All photos courtesy of Volkswagen unless otherwise stated

Thomas is a Nu Rave-blaring, heel-toe downshifting, maple syrup-swilling, chassis-geeking, junkyard parts-hauling, floppy-haired scenester who's been writing about cars since college. His current ride is a 2006 BMW 325i with the six-speed manual gearbox. Instagram: @thomas.hundal Twitter: @thomashundal
Read All My Posts »
PrevPreviousThe First ‘Realistic’ Computer Animation Was A Drive Down A Highway In 1961. Here’s A Look
NextHow Austin’s F1 Race Became ‘Too Cool’ For Normal Car Nuts. And How I Enjoyed It AnywayNext