Right off the bat I’m going to come out and just let you know that you’re going to have a small barrage of Volvo EX90 posts coming up, because I’m here in Sweden surrounded by it all, so what the hell else should I do? It’s an important car for Volvo, and more importantly, there’s a lot of interesting things going on with the car that are good to discuss. You can get the basics in our earlier post here, but that just includes just the facts provided by Volvo. I’m here in the shit, surrounded by Swedes and hors’ d’oeuvres made with salmon roe and actual, full-size preproduction versions of the new Volvo EX90 right here. So let’s talk about this new, important Volvo beyond the simple specs and numbers. We’re going to start with bubbles.

Yes, bubbles. Volvo sure likes to throw a party, and for a people that everyone tells me prefers to avoid attention and ostentatiousness, these Swedes sure like some drama in their car reveals. So there was a band and dramatic lighting and when the car was revealed it emerged from a huge cloud of illuminated, pulsating glowing orbs, as you can see above.

Now, I’ll be honest: When Volvo revealed the car, I was underwhelmed. I mean, I know it’s Volvo, and I wasn’t expecting something with triangular wheelarches or a bubble dome or anything like that, but I also felt that what I was looking at I could probably manage to lose in a Target parking lot in a matter of moments; I mean, it’s a silver SUV. 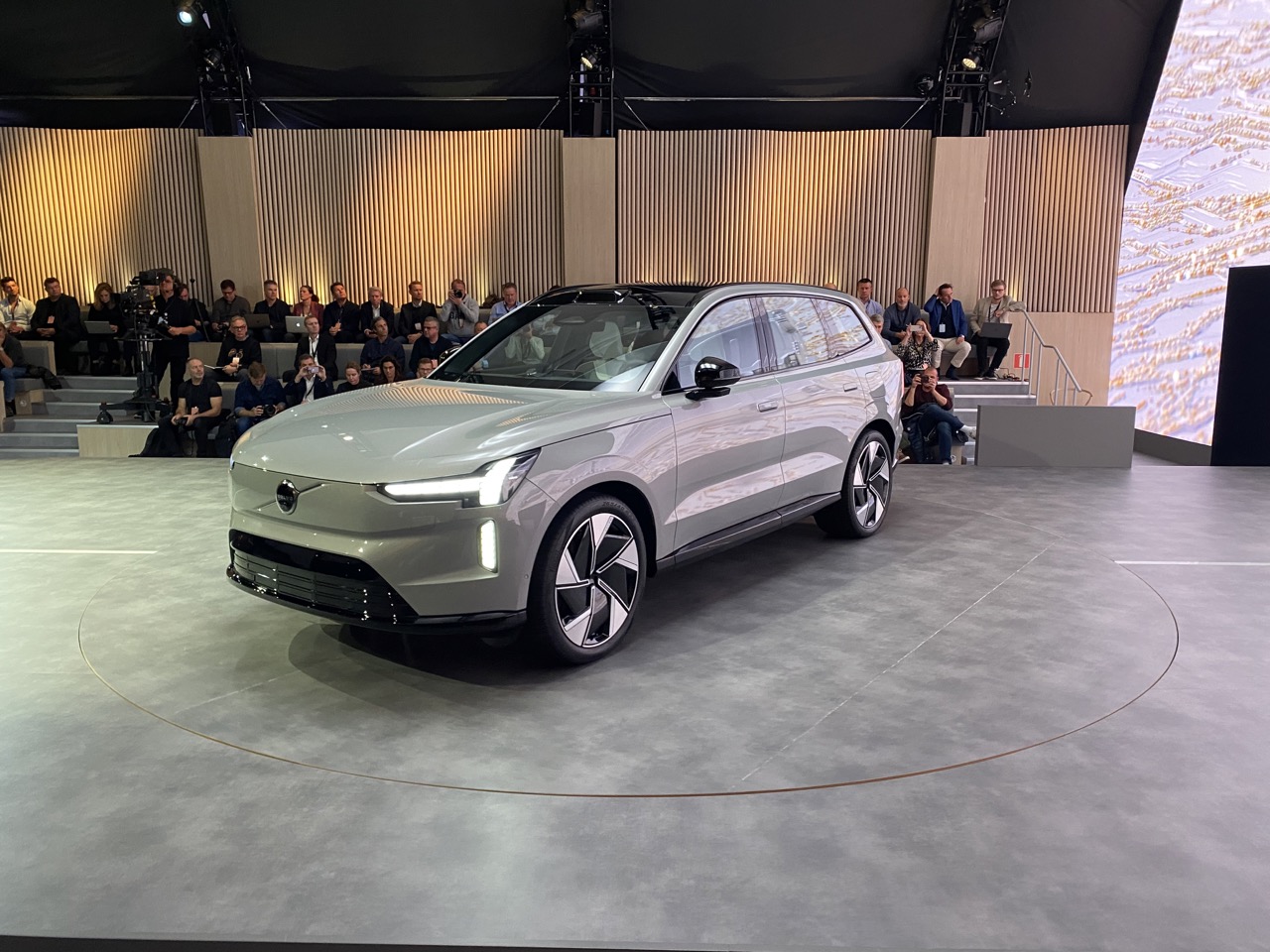 However, as I looked at it more and the presentation went on to reveal more and more about the car, I realized that this car’s beauty is firmly embedded in its details. The speakers, including Robin Page, the affable and charming Volvo head of Global Design and User Experience, among others, made a lot of references to “Scandinavian Design” and how it “brings the user closer to nature,” something that certainly holds true for a beautiful minimalist cabin out in the snowy forests of Sweden but a lot less so when it comes to assembling an Ikea MALM 6-drawer dresser with a tiny hex wrench. 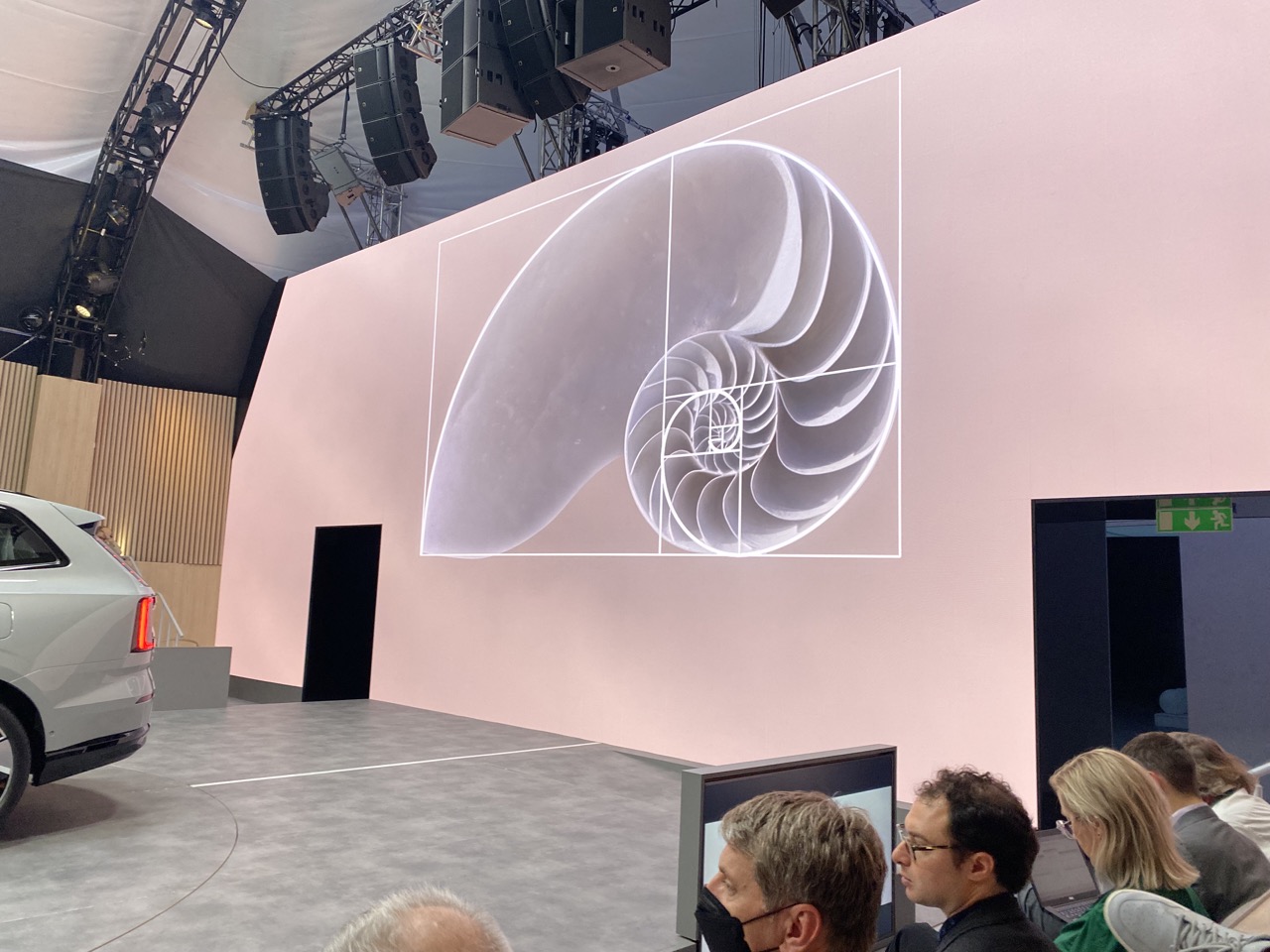 Oh, also, the presentation referenced the Golden Ratio, which I’ve learned over the years gets trotted out whenever a company wants to really hammer home that you’re wrong if you think a design is boring, because it’s actually perfect, and they did the math to prove it, and maybe you’re just kind of an ass for not seeing it, dummy. 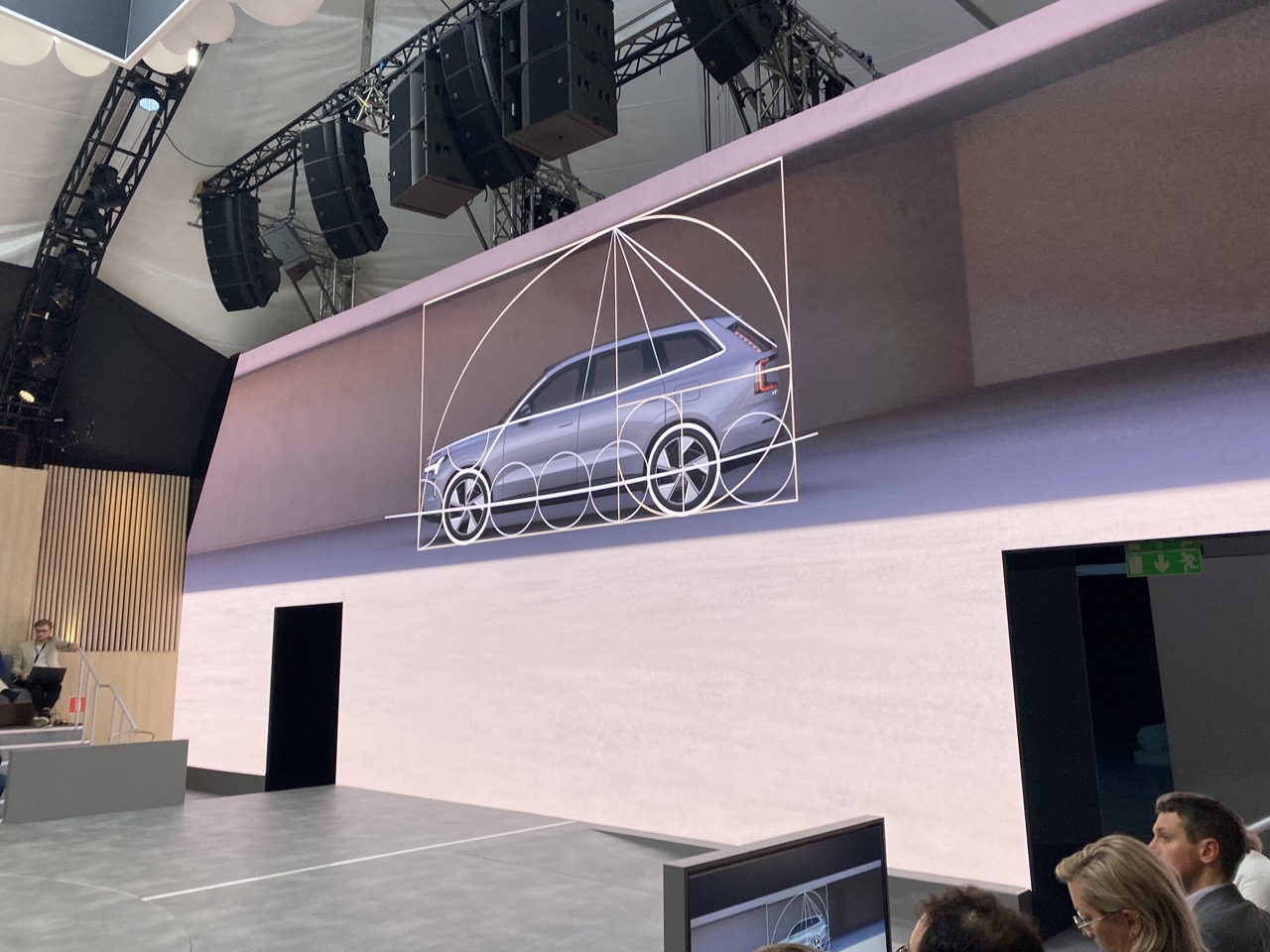 Whatever. I’m sick of seeing that seashell.

In the case of the EX90, I’m still not sure how much any of this marketing talk is true or not, but what I can say is that the look is clean and calm and sleek and there really are some masterful details in this thing, not the least of which are the headlights, which I think are a design triumph. 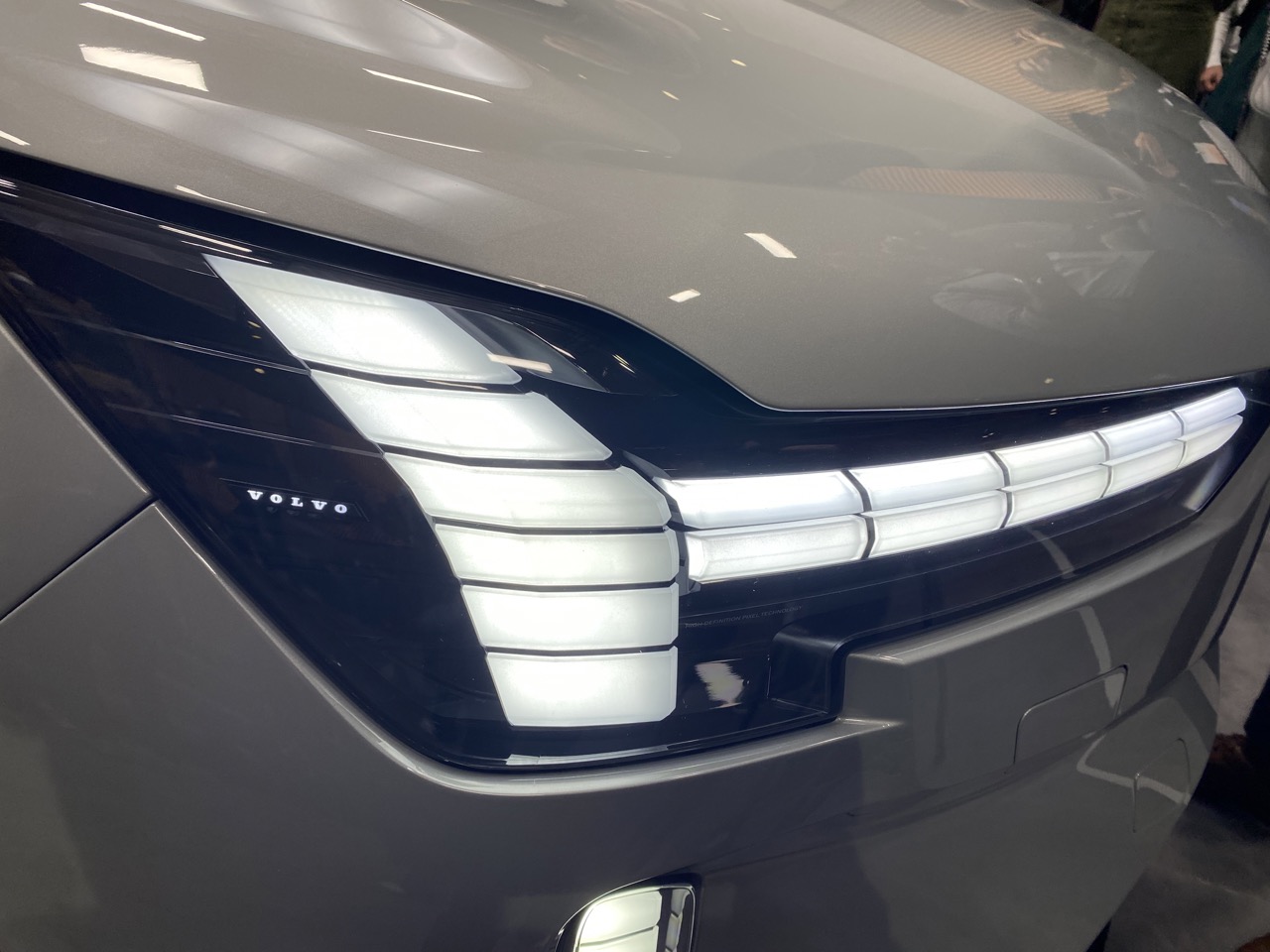 When I first looked at them, I thought that they seemed to be some sort of pre-production car/concept car frippery, because while they looked cool there’s no way those things could be legal for actual real headlights. DRLs, sure, but not real headlights. While I was feeling all smug from seeing right through this rouse, the headlights did this:

As you can imagine, I executed a massive and drenching spit take when I saw those DRLs open up to reveal the true headlamps, liberally soaking the hapless European journalists in front of me with a foamy wave of saliva and Diet Coke. Dear god, what hath Volvo wrought? In case you think this is just some sort of video trickery, I got a video of it happening on the actual car:

These headlights will be the first production headlights ever to incorporate some sort of pop-up or hidden headlight under a lens on any car, ever. Plus, the cover is illuminated as well, which I think is another first. These are really exciting and dramatic headlights that do an awful lot to add to the character of the car. I was so taken by them, I cornered Robin Page and had him tell me about them:

Of course, it makes me a little woozy to think about how much these units would cost if you broke one in a wreck. My advice would be for any EX90 owner to grow an extra kidney (try growing yours in the middle, between the usual two) to sell as a precaution for potential headlight replacement costs.

Other nice design details include the materials used in the car, which Volvo claims to have taken great pains to make sustainable, with extensive use of recycled plastics and textiles and aluminum and steel. The use of wood on the interior is novel as well, as the wood is illuminated from behind, giving it a lovely glowing pattern: 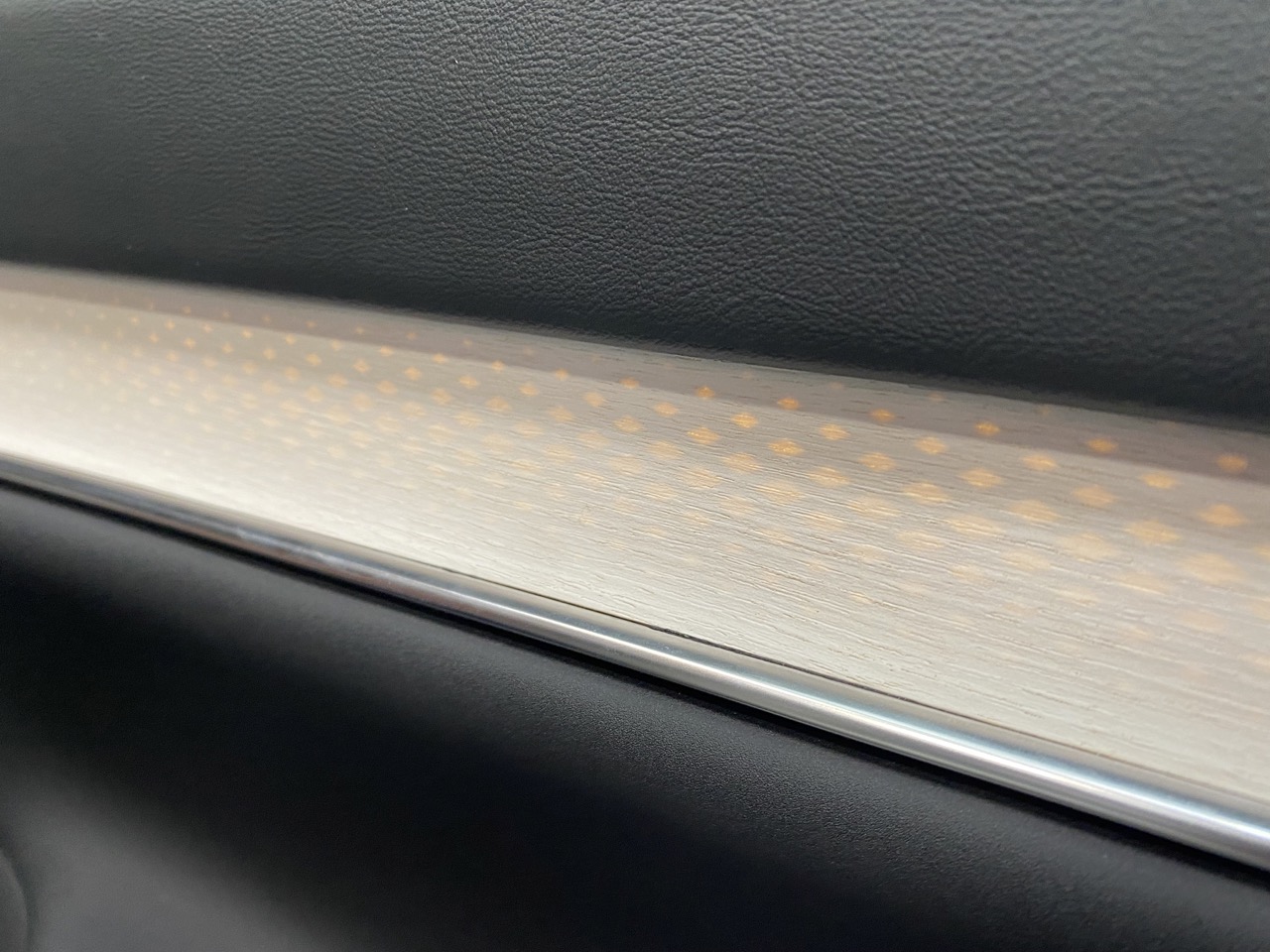 Volvo’s interiors have always been great, even back in the days of their Oreo-looking vent controls, and this new one is no exception. 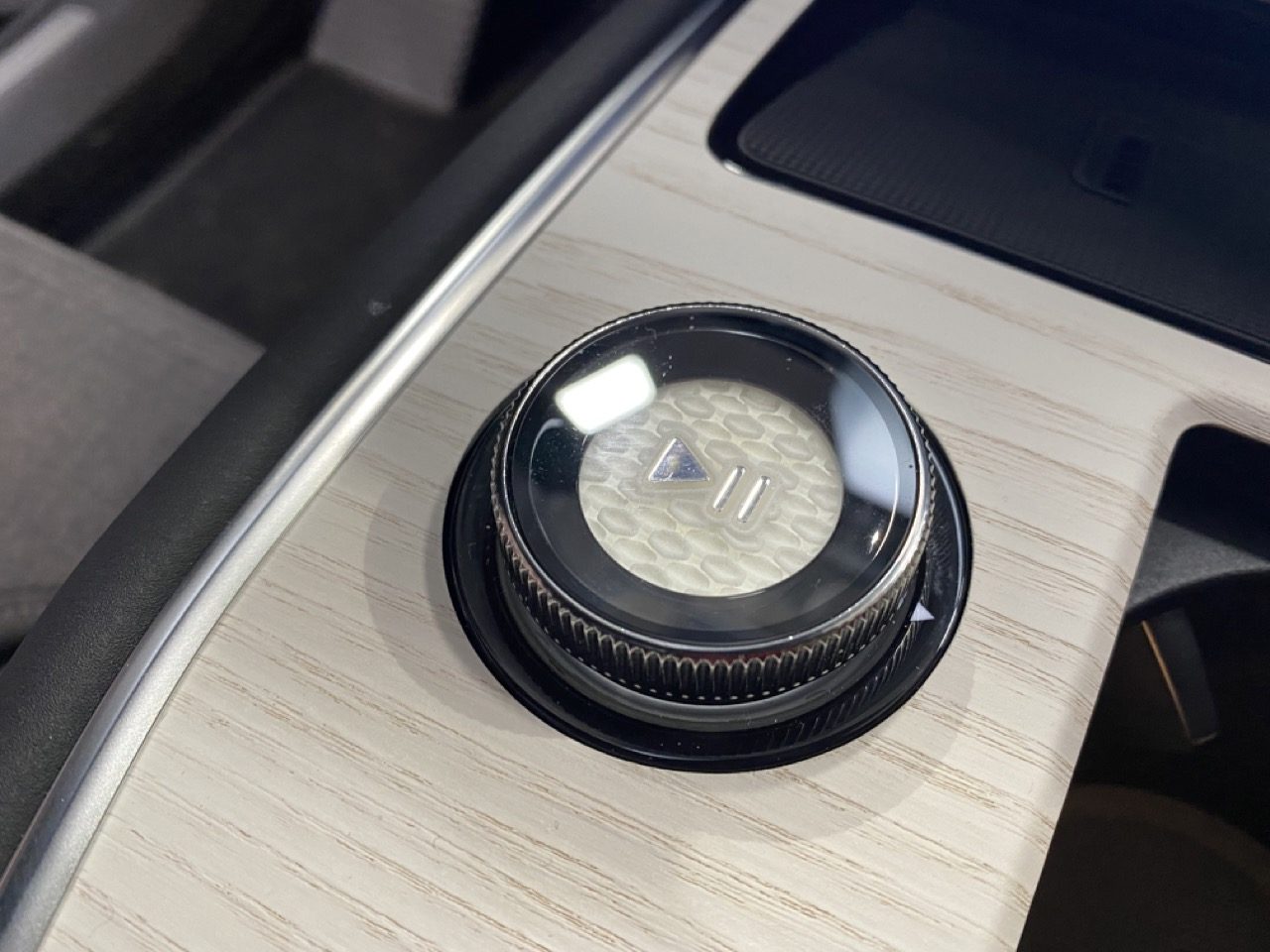 The things you touch feel wonderful and everything looks elegant and clean, and, yes, Scandinavian. The instrument cluster is a narrow little minimalistic screen about the exact same proportions as a Tandy Model 100 ’80s laptop, and there’s Volvo’s now signature portrait-oriented screen in the middle. 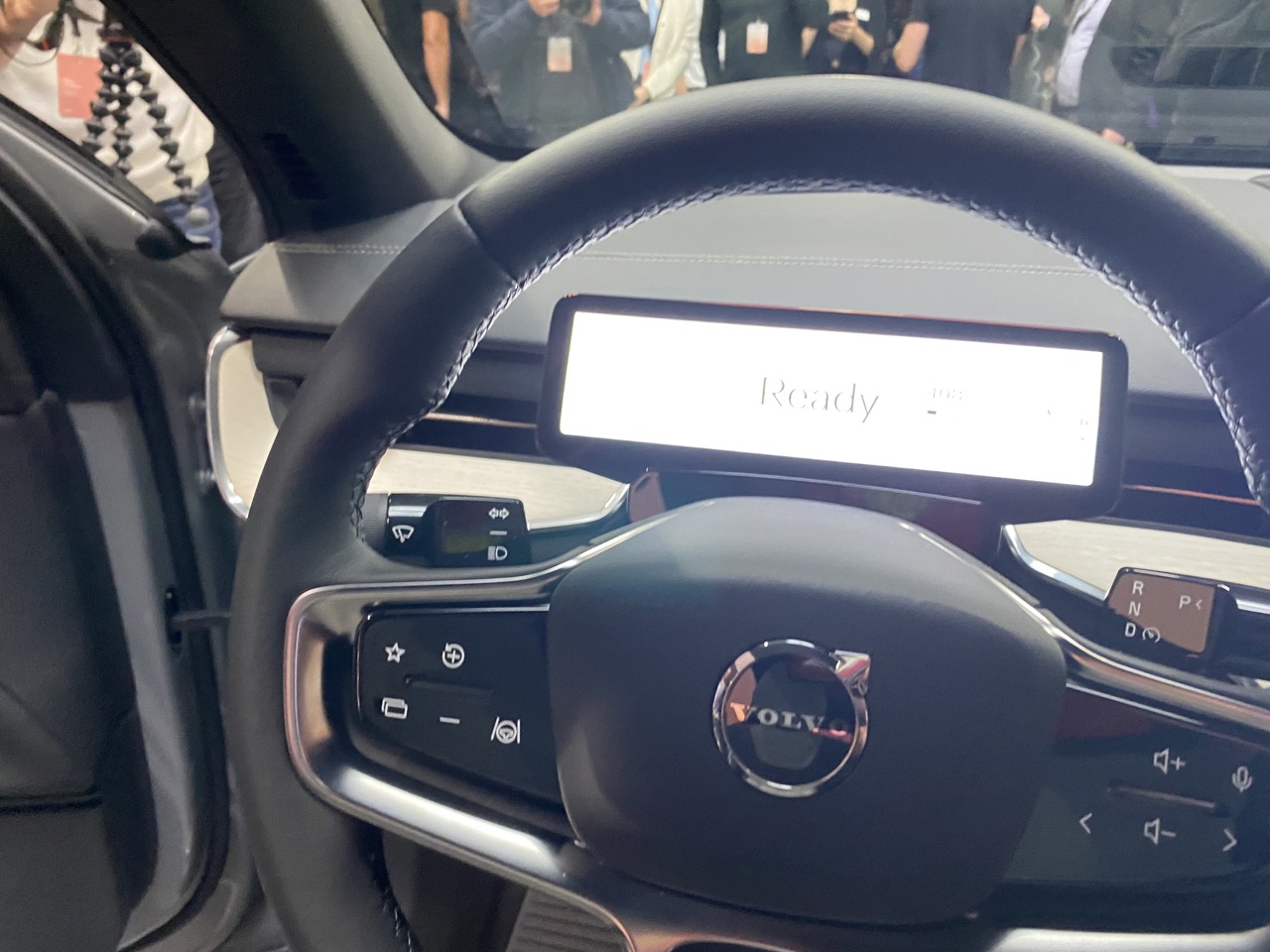 There are also some more subtle details like this nifty little cargo-packing chart molded into the tailgate plastic: 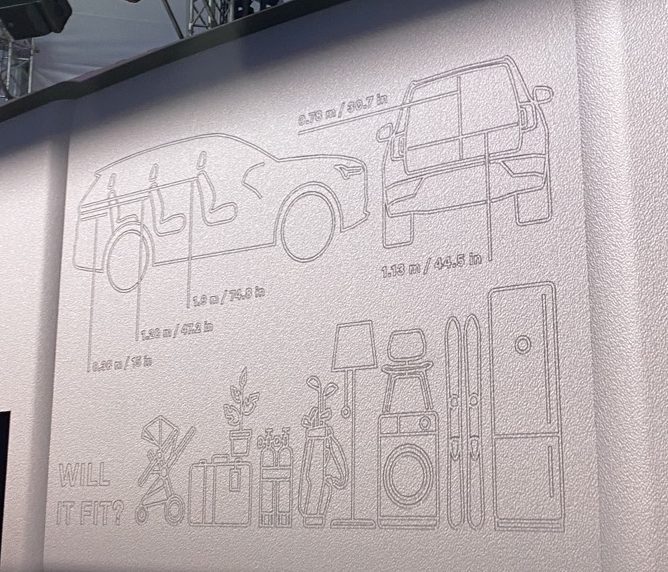 I think it’s bold of Volvo to include the washing machine and refrigerator in there. They also note the cargo dimensions with the third and second rows up and down, which is nice. Also nice is the design detail of the frameless side-view mirrors, which also incorporate a pretty substantial camera unit: 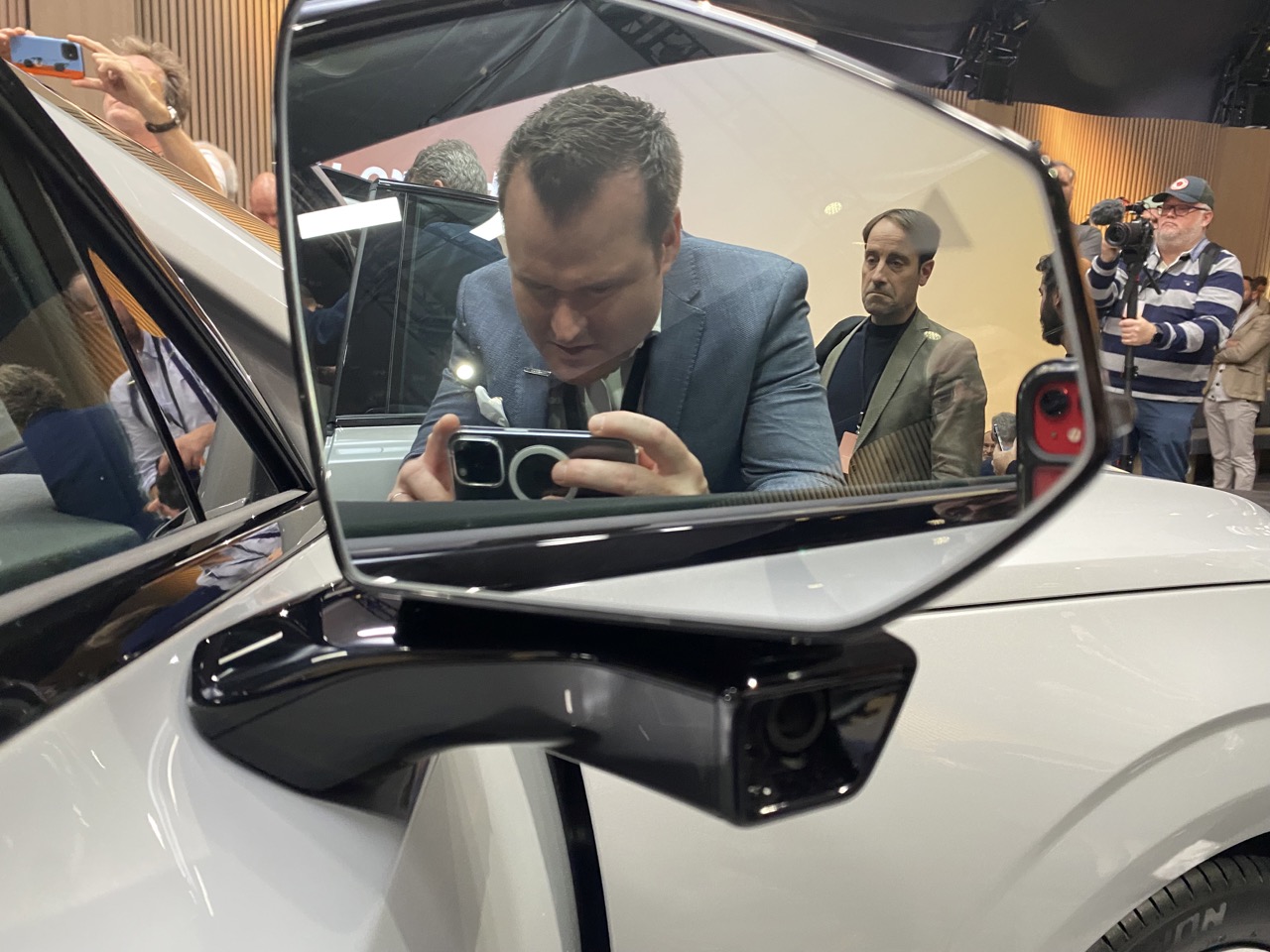 And no, I don’t know who those guys in the mirror are, but hello, fellas. Now get out of the way, because I have a car to scrutinize, which includes opening the hood to see if the designers could be bothered to carve out some manner of frunk, something that’s important to me. You can see this process in this video where I attempt to do a bit of a walk-around in the dense crowd of eager journalists:

As you can see, yes, a frunk exists! I mean, it’s not exactly a colossal frunk: 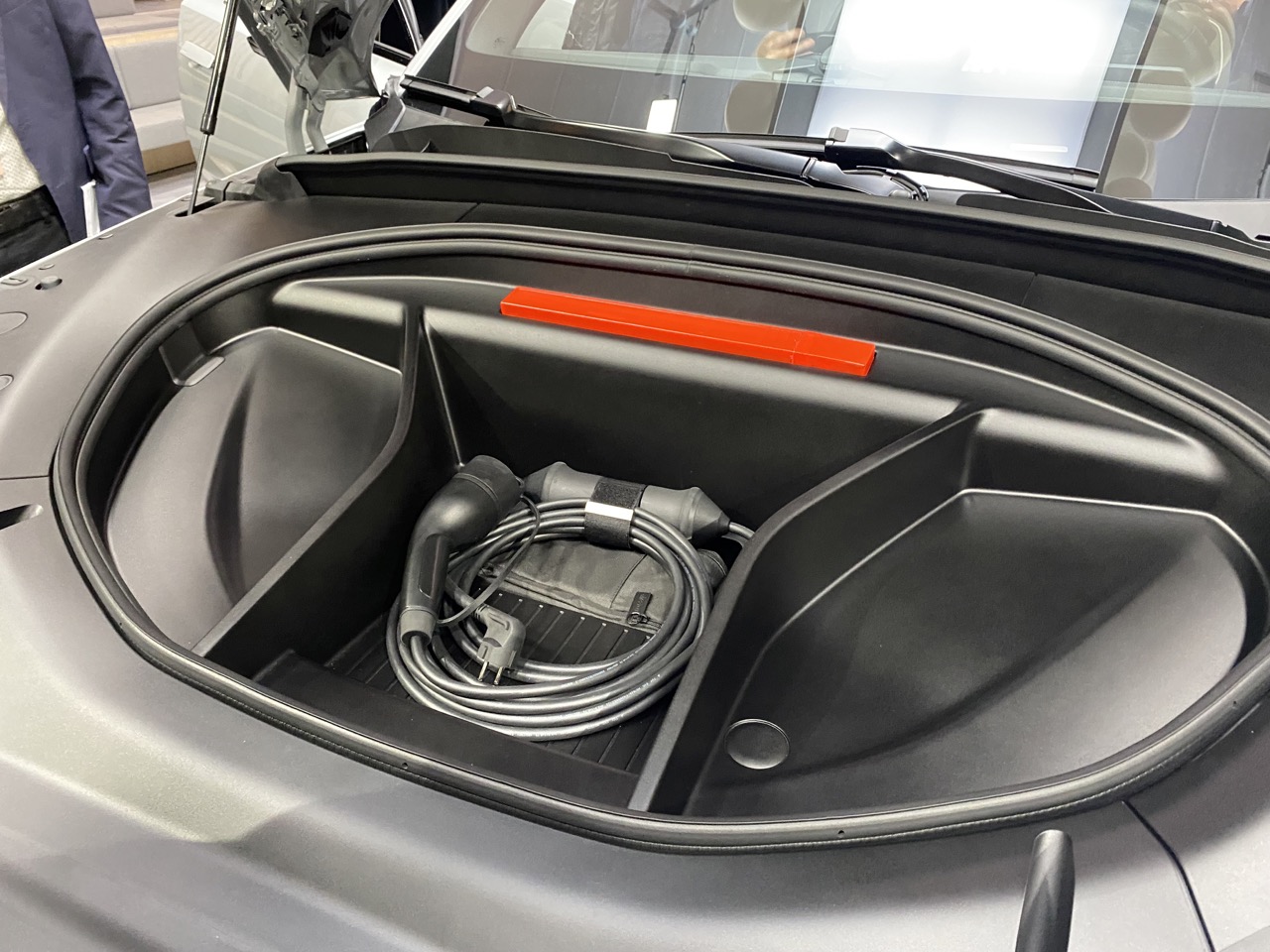 …but it’s something, and, most importantly, it’s usable for charging cables and other crap that you wouldn’t want to have to dig out from under all your other luggage when you were on a road trip or whatever, and that’s worthwhile. Honestly, I just appreciate the efforts to give as much usable volume as possible to the car’s owner, and there’s definitely usable volume here. 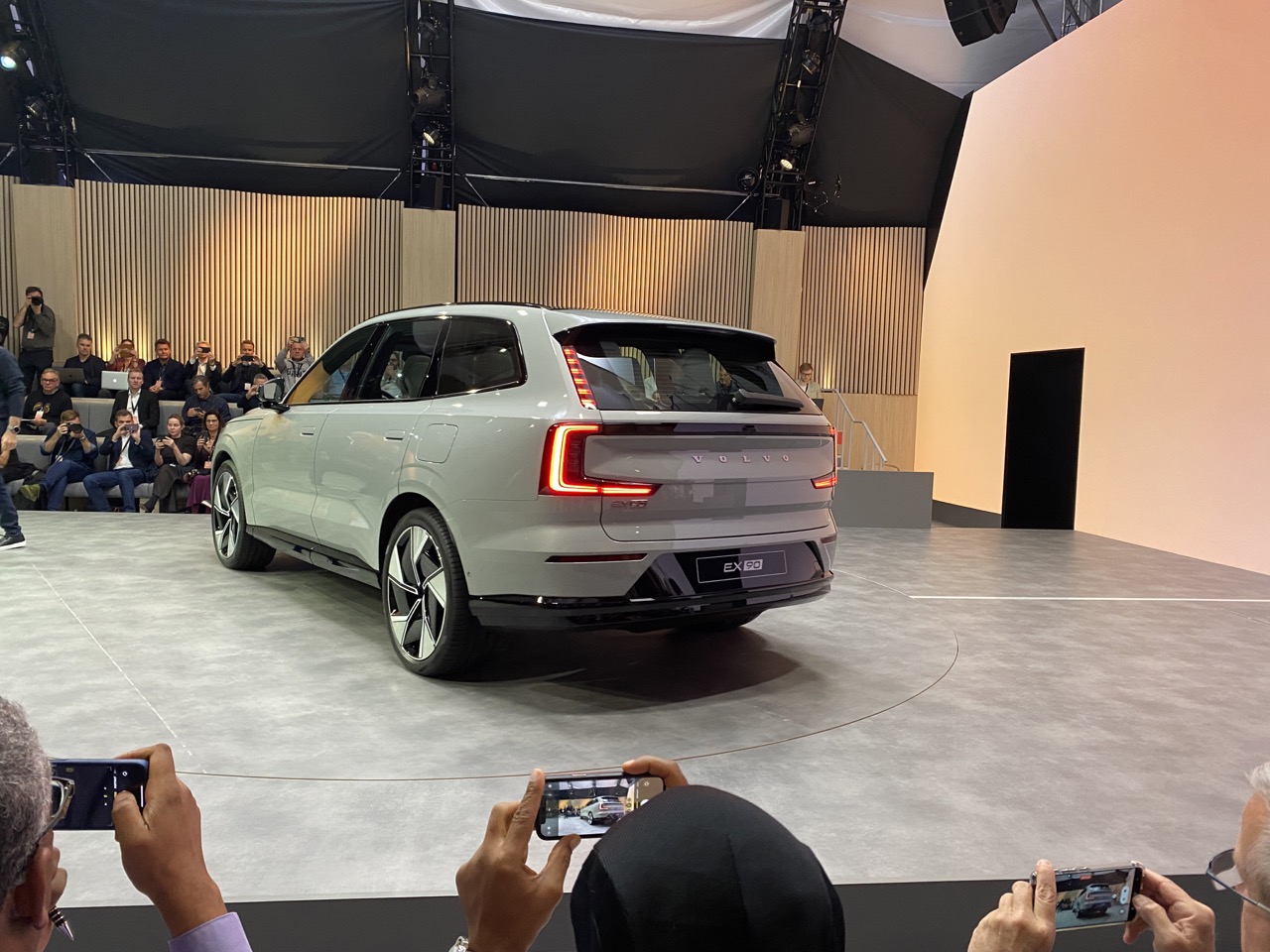 The big, overarching theme of this whole reveal event, and, really, this car, was safety, which shouldn’t be a shock for anyone who has been paying attention to Volvo for the past, oh, ever. Volvo really, really wants to have no one be seriously injured or die in one of their cars, and as a result have been putting in enormous effort to achieve this goal. They claim that the EX90 is the safest Volvo ever made, and a lot of why has to do with their interesting and unusual for the industry approach to semi-autonomy.

Volvo made a big deal about how the EX90 has one central main computer, a Snapdragon-powered unit capable of 280 trillion operations per second, and has two separate Invidia AI platforms embedded within. They claim the system has “exactly the amount of computing power for the future, no more, no less,” which gives me unpleasant reminders of a certain quote about 640K of RAM, but perhaps could be true depending on their eventual goals. 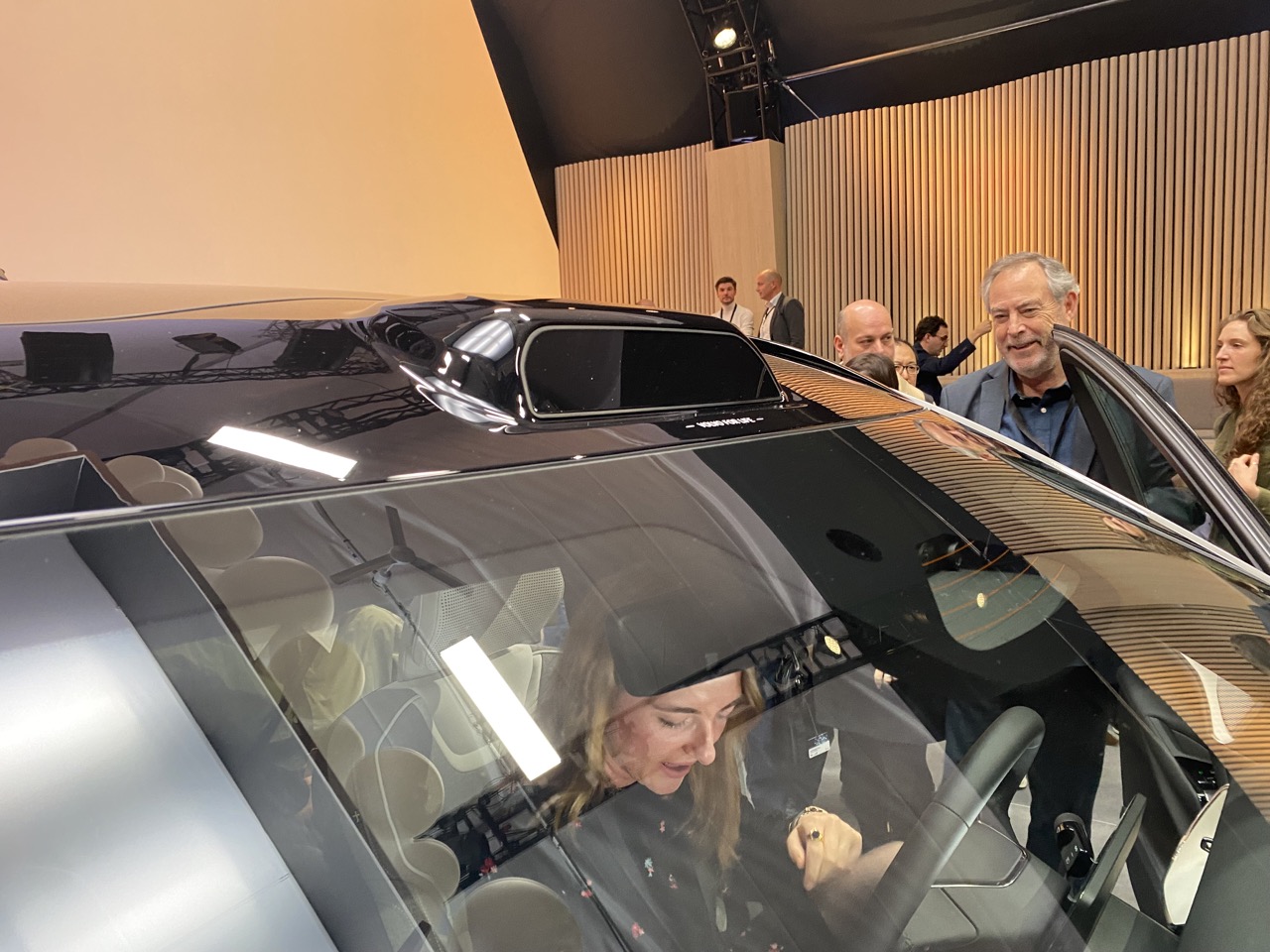 The EX90’s sensor system is significant because it’s the first global car to include roof-mounted LiDAR, the laser-based computer vision system that, in this application, gives the Volvo 250 meters (820 feet) of vision, even in complete darkness. The LiDAR is fused with eight cameras and five radar systems to give the EX90 a 360° view of its surroundings, a sensory bubble that Volvo is using primarily as an assist to the driver instead of as a way to let the driver pay less attention.

I think this is such an important point that I interviewed Volvo automated driving partner Luminar’s CEO, Austin Russell, about Volvo’s approach at length, and I’ll have that for you to read as soon as I can. I promise it’ll be interesting. Here’s one fun thing I learned from Russell that I can tell you now, though: there is a sensor cleaning system for the LiDAR transceiver, and it works by having one of the wipers swing up and spray washer fluid right at the LiDAR window.

The idea of safety was hammered in over and over, to the point where I was expecting Volvo to hand us mandatory helmets to wear for the short walk back to the hotel. But it all makes sense; Volvo is taking an approach with a tech-slathered, premium EV three-row SUV, and to differentiate it they’re leaning hard into safety, as fits their long-established image, and pushing back against the pervasive idea of gadgetry and tech just for its own, often silly, sake. 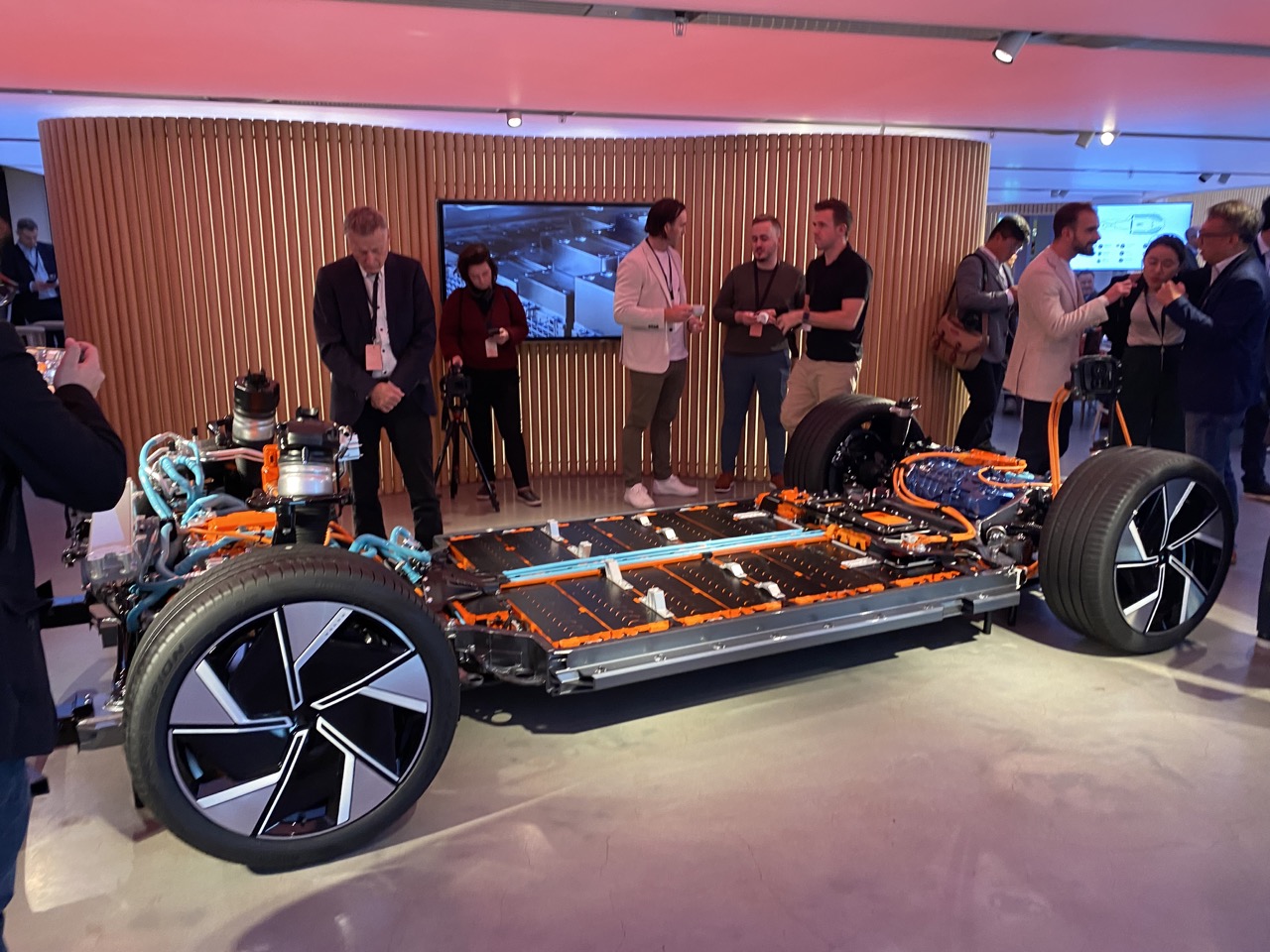 Volvo also noted that its battery modules are designed to resist puncture and intrusion into the body, a good precaution considering how intensely flammable lithium-ion batteries can be. 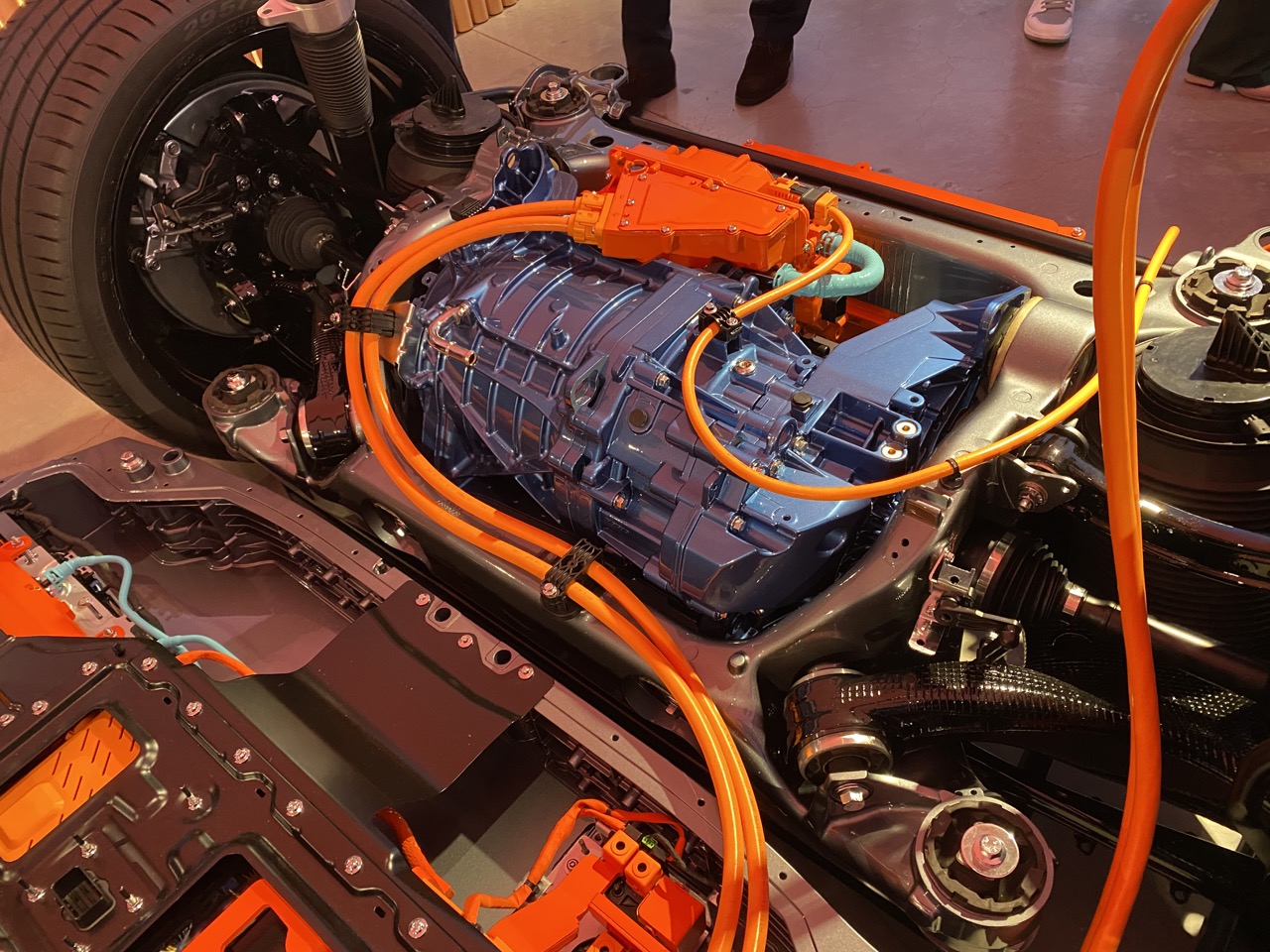 The two-motor platform is all-new, and we’ll look into doing a deeper dive on it in the future.

Despite my initial reaction, I now understand why this is such an important car for Volvo; it’s an impressive collection of clever design details and extremely cutting-edge tech in an unassuming and tasteful shell. Its motivations are practical and serious, safety and efficiency, and there’s a lot to respect here, especially their approach to semi-driving automation.

I just hope it’ll come in colors other than grayscale ones.

I'm a co-founder of the Autopian, the site you're on RIGHT NOW! I'm here to talk to you about taillights until you cry and beg me to stop, which I absolutely will not. Sorry. Hug? Also, David's friend.
Read All My Posts »
PrevPreviousDetroit-Area Autopians: Let’s Go Off-Roading On Saturday
NextCheck Out This Tiny Jeep-Branded Off-Road Trailer With An Available Kitchen And FridgeNext