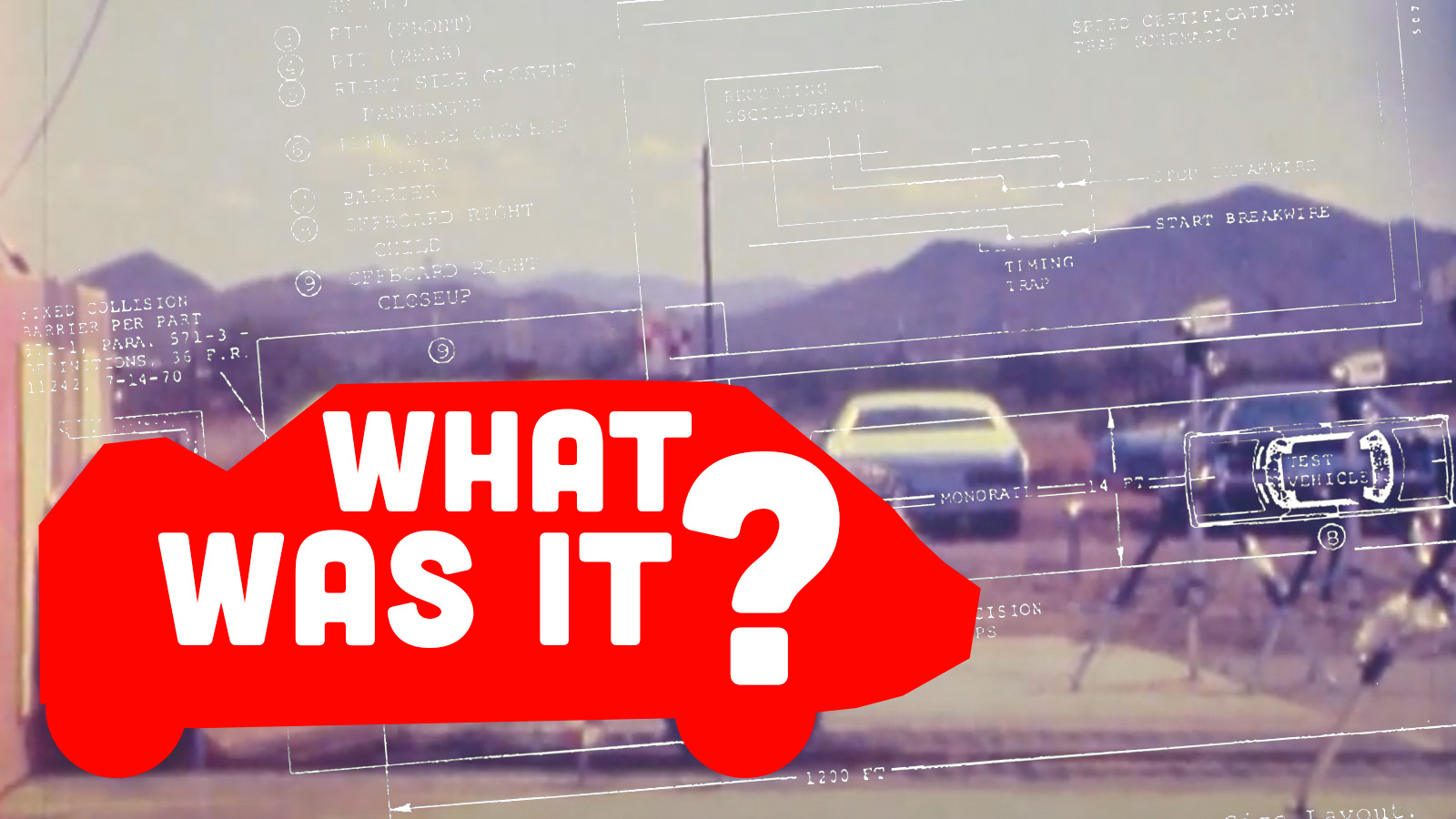 I mean, maybe you know this, but it feels like a pretty niche bit of trivia, even to a dork like me. I feel like it’s a sort of unexpected choice given the American car market on May 21, 1979, when the National Highway Traffic Safety Administration (NHTSA) undertook their first official frontal crash test, driving a car about 35 mph into a solid concrete barrier. Thanks to NHTSA being a public, governmental agency, you can access all the available information and documentation about this historic crash test online, complete with some video and a full-in depth report. It’s really quite fascinating, and I’m going to tell you what the car was, but not until the second paragraph, because I want to be sure you click through to the whole story. I’m greedy, you see.

Okay, thanks for that. Here’s what the first official NHTSA crash test car was: a 1979 Plymouth Champ! Yes, a doubly-rebadged car, since the Champ was actually a captive import version of the Mitsubishi Mirage, which was sold in Europe as a Mitsubishi Colt, and in America through Chrysler as a Dodge Colt or Plymouth Champ. 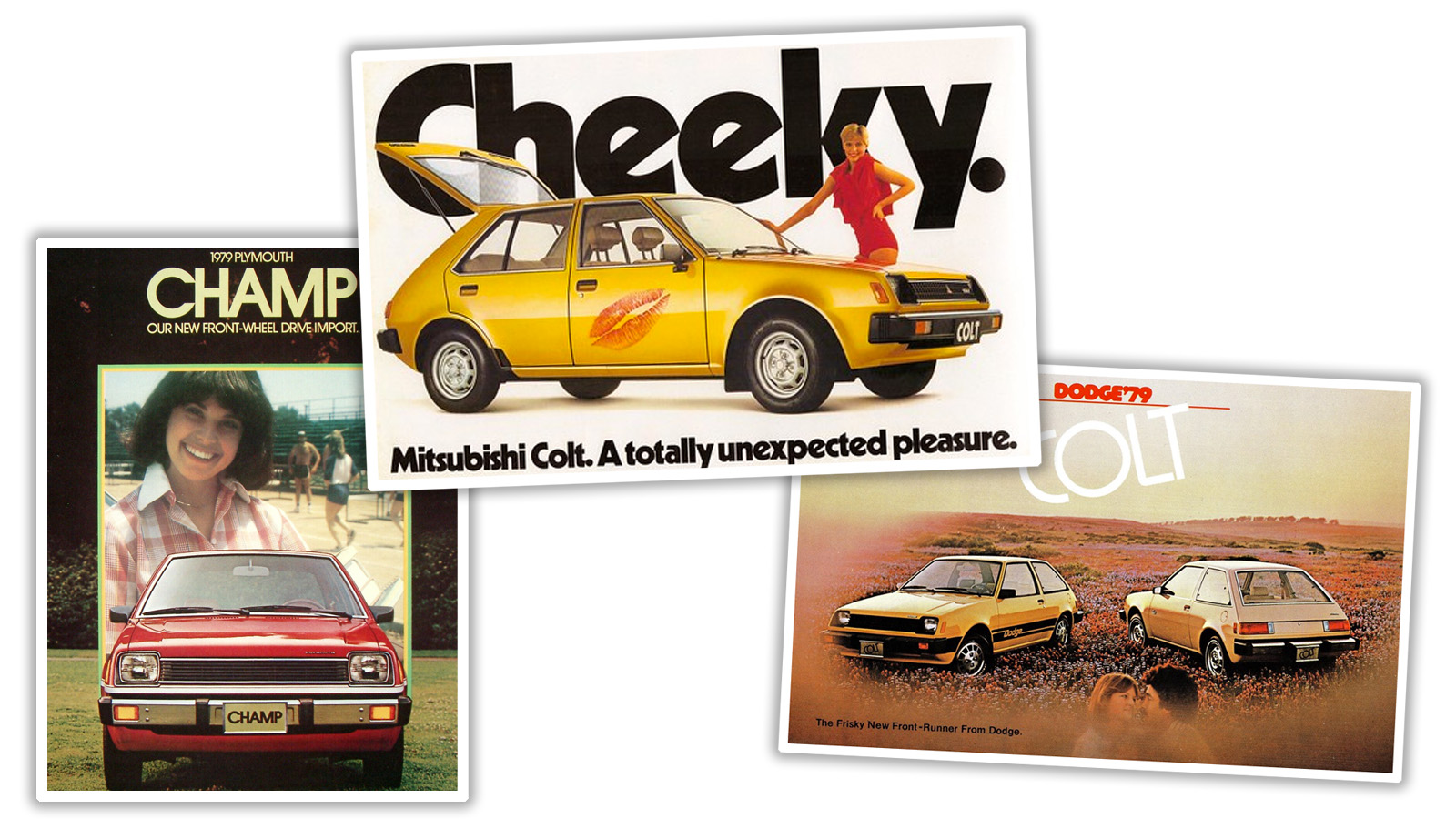 I suppose I find this an odd choice because you’d think NHTSA would have started these tests with much more popular cars, or even maybe the best-selling car in America at that time, which was the Oldsmobile Cutlass, selling over 500,000 cars in 1978. Plymouth only sold just over 27,000 Champs in 1979, so this was kind of a niche choice. I have always been fond of these little hatchbacks design-wise, as they’re so clean and kind of sleek compared to so many similarly-shaped cars of the era.

I’m not sure I’ve ever felt they were particularly safe, and perhaps NHTSA thought the same, which could be why they selected the Champ for their first NEW VEHICLE ASSESSMENT AND STANDARDS ENFORCEMENT INDICANT TESTING, as the first report was titled. There’s one video of the event, so if you want to watch a ’79 Champ smack into a wall, hot damn is today your day:

The impact was recorded at 35.27 mph, and if you’re wondering how the Champ fared, the report goes into plenty of detail. If you’d like to know more about the scene where this was shot, the report includes a diagram of the whole setup: 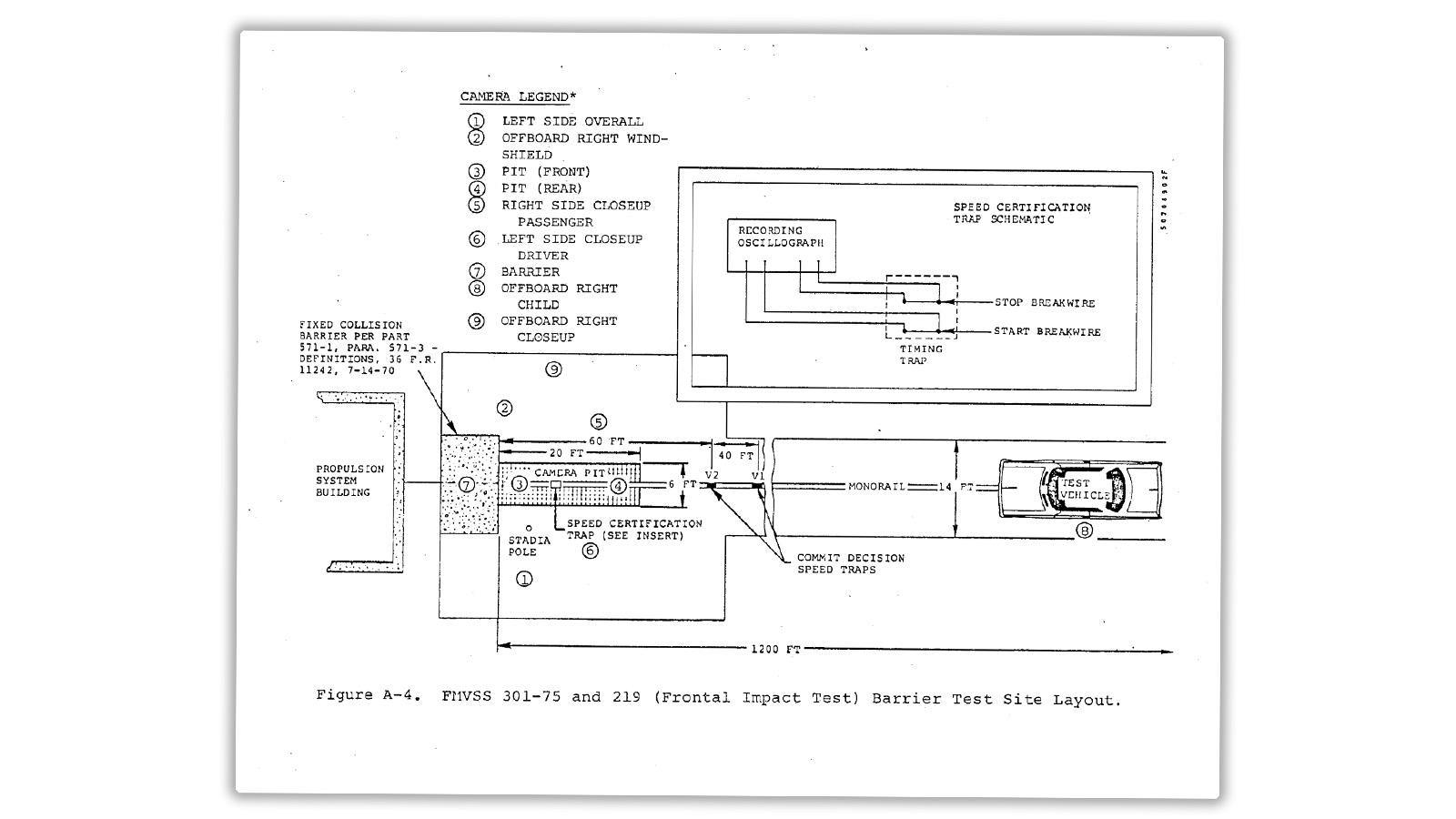 So, if you’re planning on re-creating this scene for a major motion picture about the First Frontal Crash Test (starring Tom Hanks as NHTSA, Cate Blanchett as the Champ, and Nathan Lane as The Barrier) you can use this as your guide.

I should note that this isn’t the first deliberate crash test into a barrier ever; GM did that back in 1934. I can’t find specific video of that first test, but this is a fun video of a Chrysler Airflow of the era getting shoved down a rocky hillside, so that should be just as much fun, anyway:

NHTSA helpfully has a searchable database of their crash tests, which includes video and full reports for most of the cars listed. It’s a little bit confusing because numerically, the tests don’t match chronologically. What I mean is the crash test that is numbered “1” is actually a test of a Chevrolet Citation from July 6, 1979, a few weeks after the Plymouth Champ test, which is confusingly numbered test 33. I don’t get why it’s like this, but I’m guessing fixing it is not a huge priority over at NHTSA. 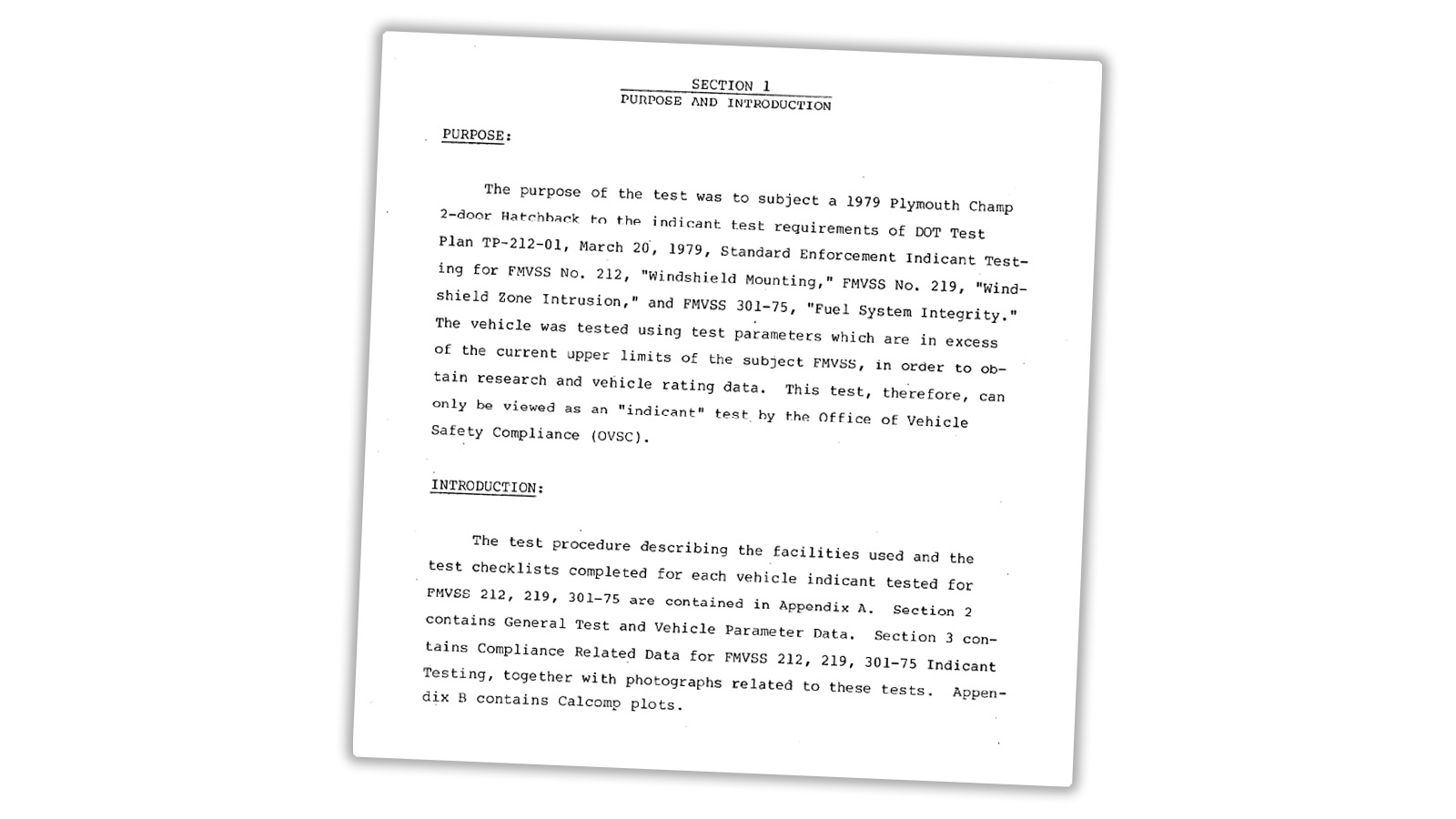 The stated purpose of the crash test is interesting; it appears that NHTSA was primarily interested in three criteria: “Windshield Mounting,” “Windshield Zone Intrusion,” and “Fuel System Integrity.” The fuel system integrity one is perhaps the easiest to understand, especially given the uproar caused by the Ford Pinto’s dangerous fuel system design from a few years before. The windshield-related tests would certainly be good metrics to evaluate overall frontal crash performance, since if that “windshield zone intrusion” is found to be significant, that’s a pretty good indicator that the crash didn’t go so great for the people inside the car. 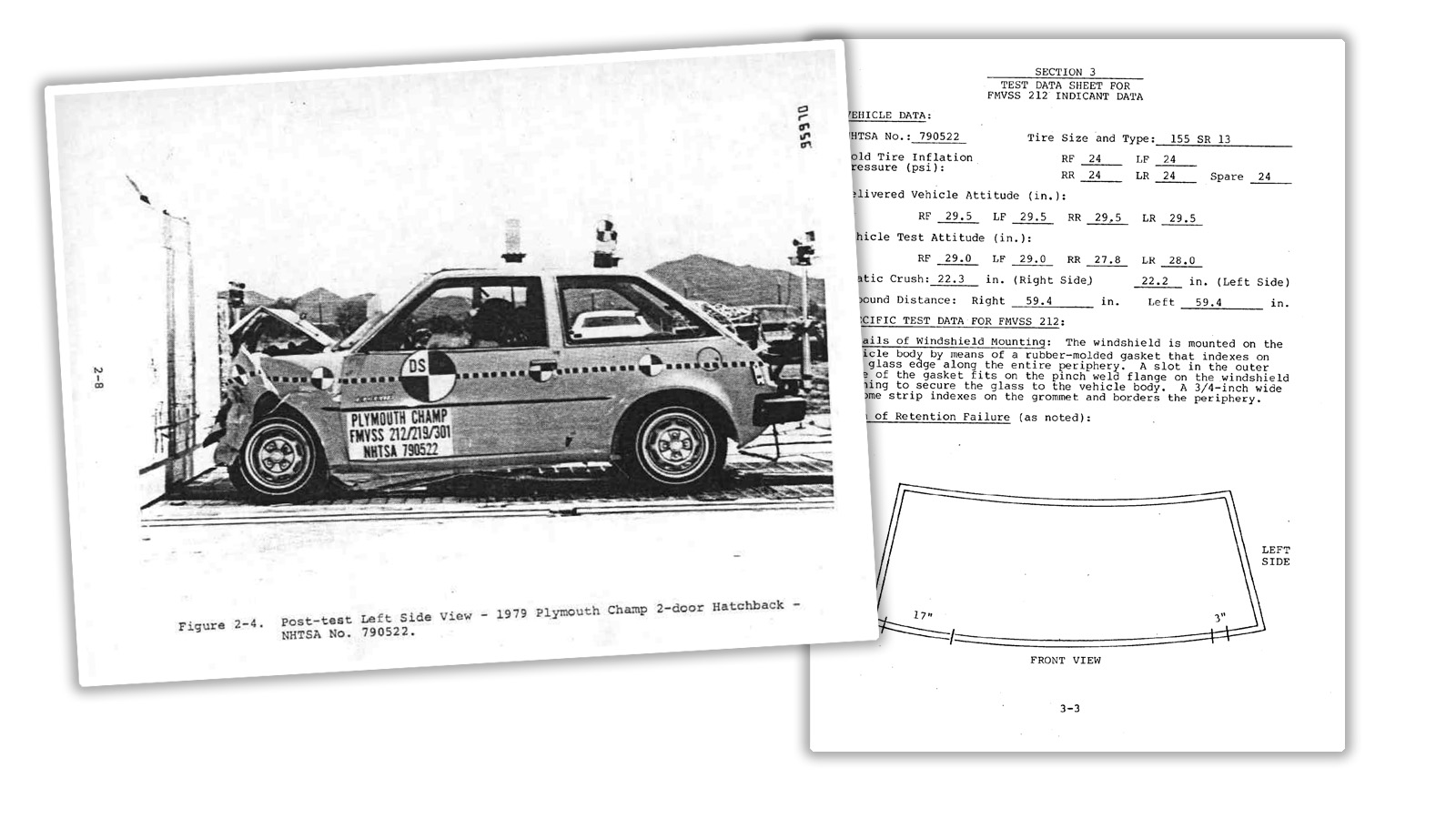 The Champ took quite a whack on the front end there, as you’d expect, and we’re well before the airbag area, so the results weren’t wonderful for the car’s occupants. Those occupants were some crash test dummies, which are described here: 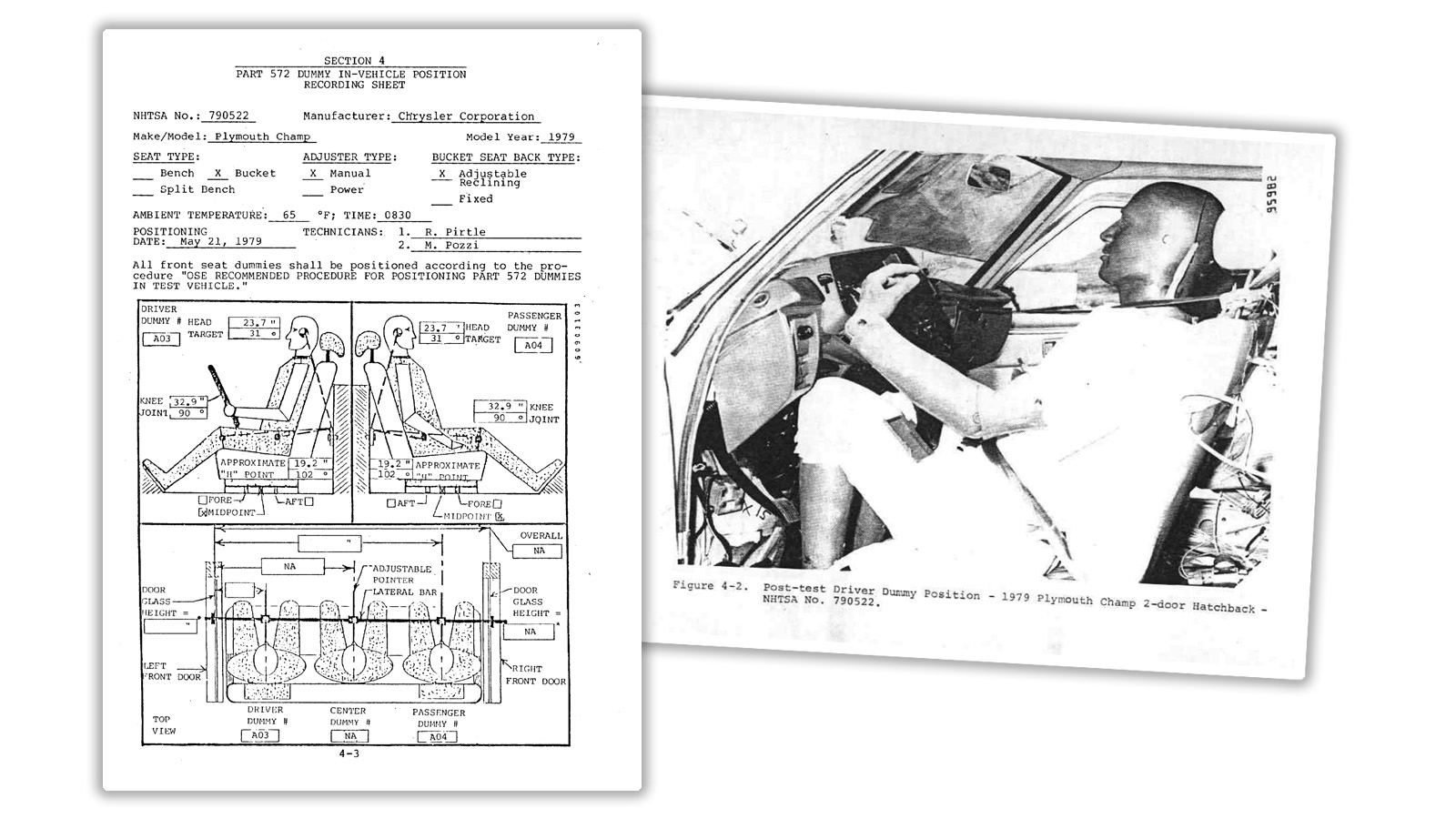 It looks like only three dummies were used in the Champ test, and this is how they fared, two adults and a child: 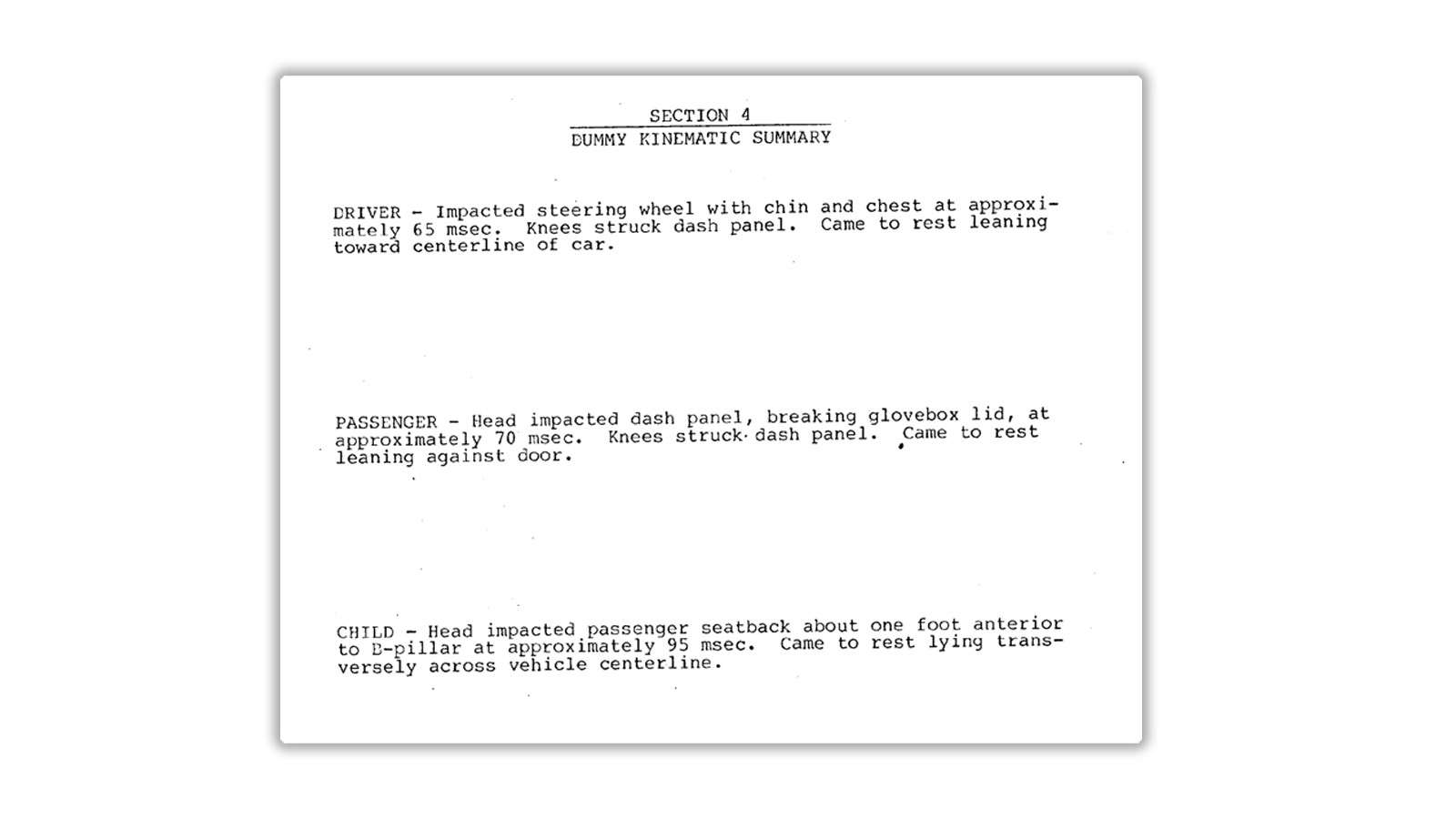 Both front seat passengers took smacks to the head, with the driver’s chin hitting the steering wheel and the passenger’s head hitting the dash, in that case with enough force to break the glove box lid. The kid hit the passenger seatback and ended up laying sideways in the rear. Not fantastic, though the car actually held up a bit better than I might have predicted. 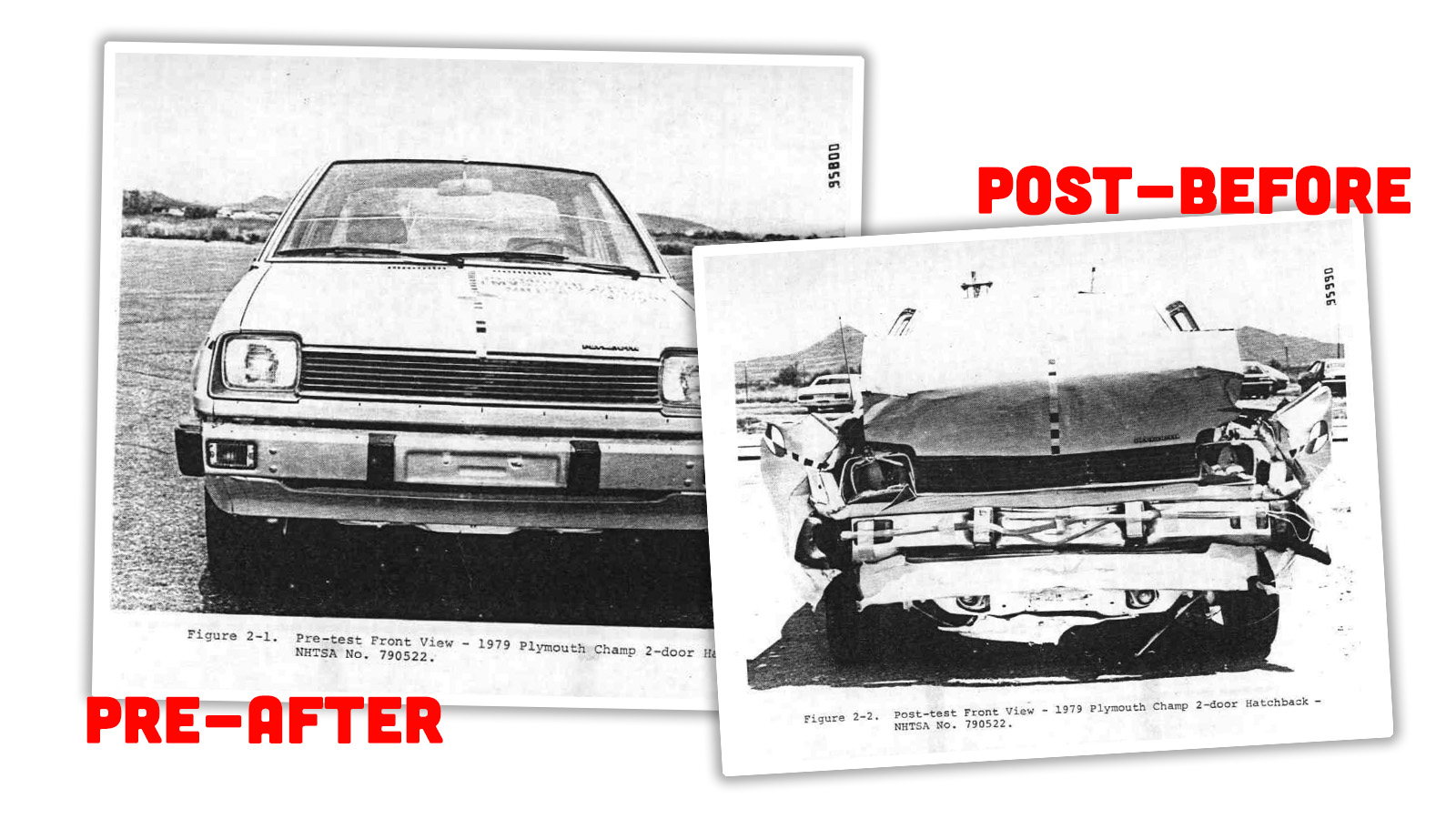 The Champ seemed to have fared pretty well regarding fuel system safety, with the fuel tank not appearing to leak at all post-crash: 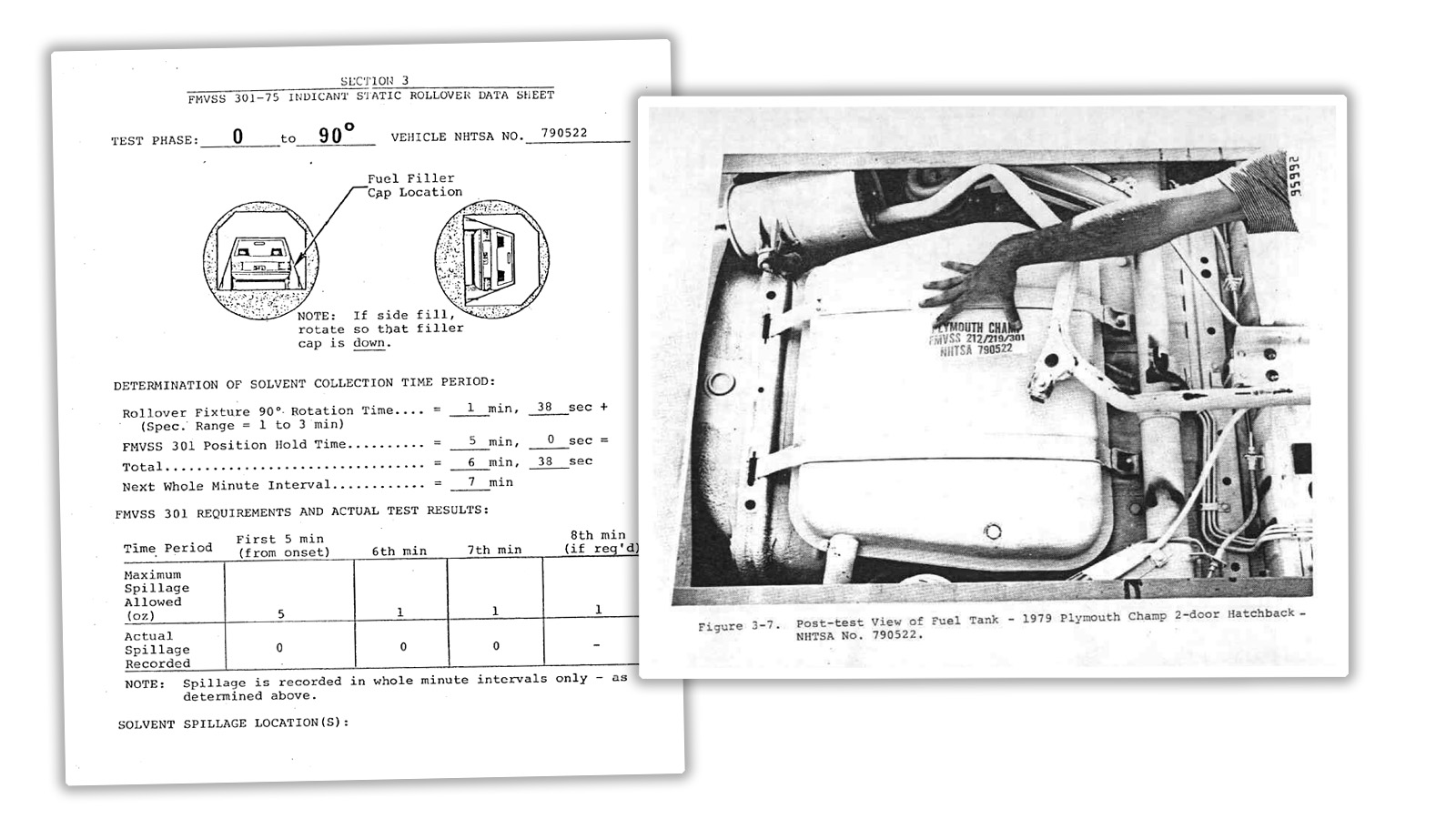 I do like the low-tech, not-gonna-bother-to-find-the-tape method of labeling the picture there, too. Note that there’s zero actual spillage recorded on the rollover test, so way to go, Champ. It’s not too surprising considering the tank is way at the rear of the car, under the trunk floor.

Also interesting to note: the example car used to note measurement points and establish the coordinates used to pinpoint locations appears to be a Ford Fiesta: 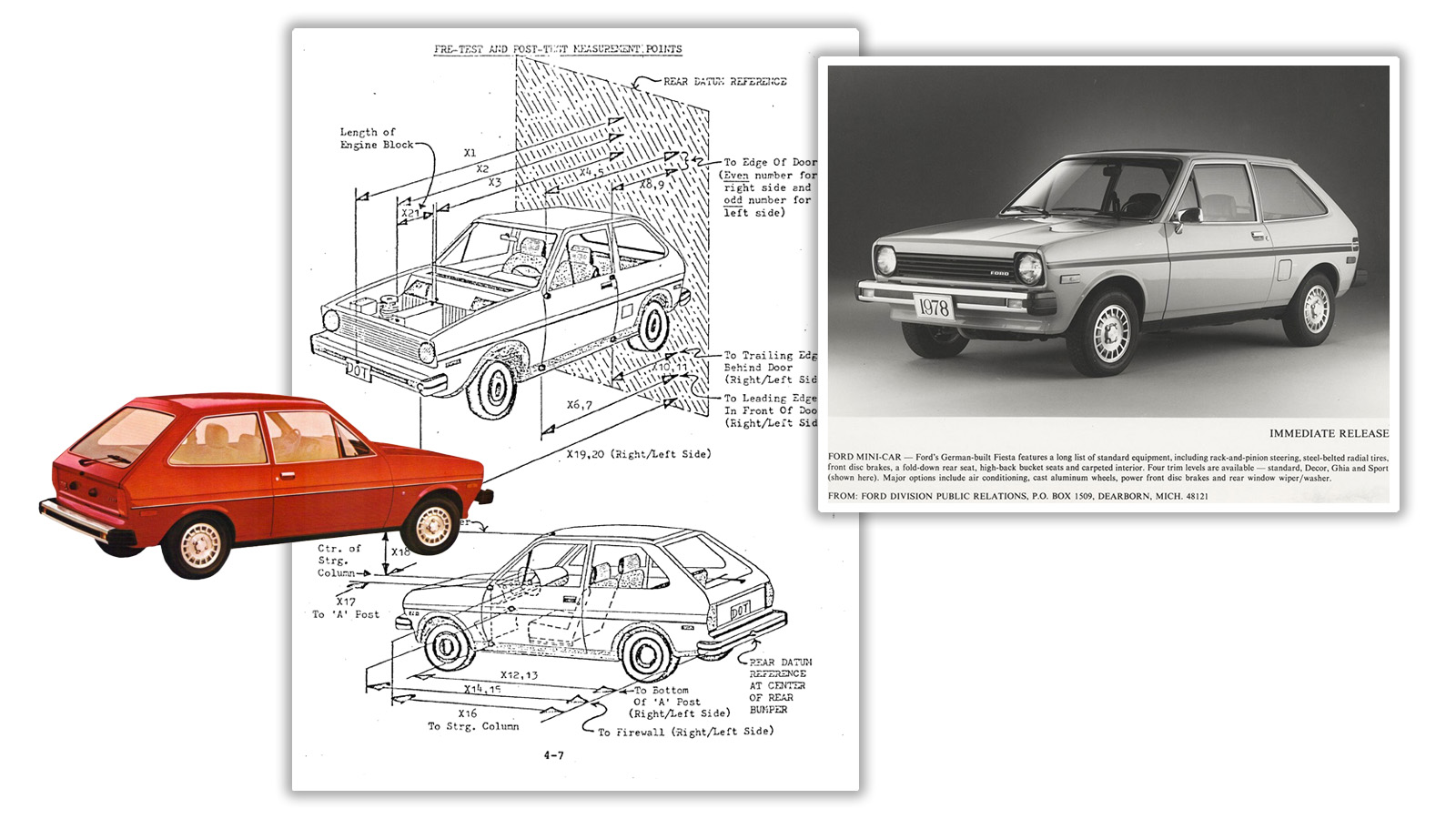 I’ll be honest; I’m not sure why I initially found myself interested in this first NHTSA crash test, but after digging around in this data I find I have a renewed appreciation for NHTSA, mostly because all of this information is so readily available. If you’re looking at a used car, you can go through this database and find really detailed information about how it performed in crash tests, and get a lot of good insight into the design and build of the car. And it’s all free! Our EIC and dedicated wrencher David knows this already

The American government doesn’t do everything right by a longshot, but sometimes, in some humble places, you can see some examples of when things do actually sort of work.

I'm a co-founder of the Autopian, the site you're on RIGHT NOW! I'm here to talk to you about taillights until you cry and beg me to stop, which I absolutely will not. Sorry. Hug? Also, David's friend.
Read All My Posts »
PrevPreviousHere’s What Experts Think Could Happen To Used Car Prices In 2023
NextLet’s Dive Into The Subscription Services BMW Offers In AmericaNext