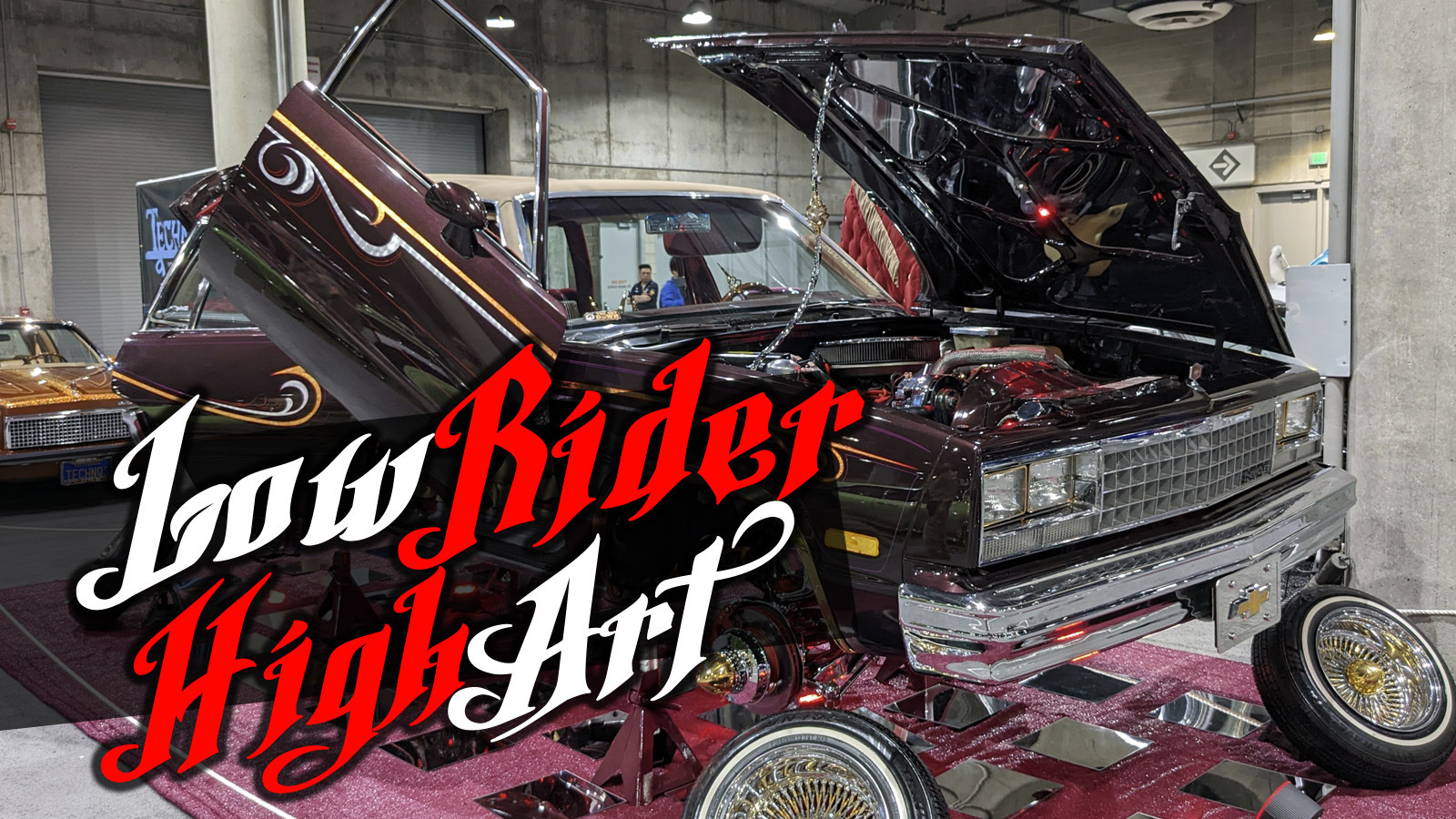 “What was the nicest, most intricately-detailed, most luxurious car at the LA Auto Show?” If I asked that to 100 people, I bet all 100 would list off high-end luxury cars offered by, say, Aston Martin, Lexus, or Alfa Romeo. But then all 100 would be wrong, because the true gems of the LA Auto show were hidden in the basement. I’m talking about the lowriders — vehicles detailed with such precision that owners confidently place mirrors beneath them to display how every single square inch of every surface has been meticulously crafted with a true artist’s vision.

I want to begin this article by stating that I’m not qualified to write about lowrider culture — like, at all. I’m writing this as someone who is, frankly, completely ignorant but at the same time highly appreciative of what I consider a consistently underrated subculture largely under-covered by mainstream automotive media. This is going to change, and The Autopian’s first step in fixing this egregious oversight is to bring you this small video from the LA Auto Show Floor:

“Freakin’ white people don’t known about lowriding!” joked Anthony, the gentleman who organized the Rockin’ Chicano exhibition at the LA Auto Show. On some level, he’s playing around, but on another level, he isn’t wrong — at least not in reference to Torch and me, two people who most would consider car “experts.” And yet when it comes to lowriders, we’re idiots, but so, so keen to learn more. Thankfully, Anthony schooled us a bit. 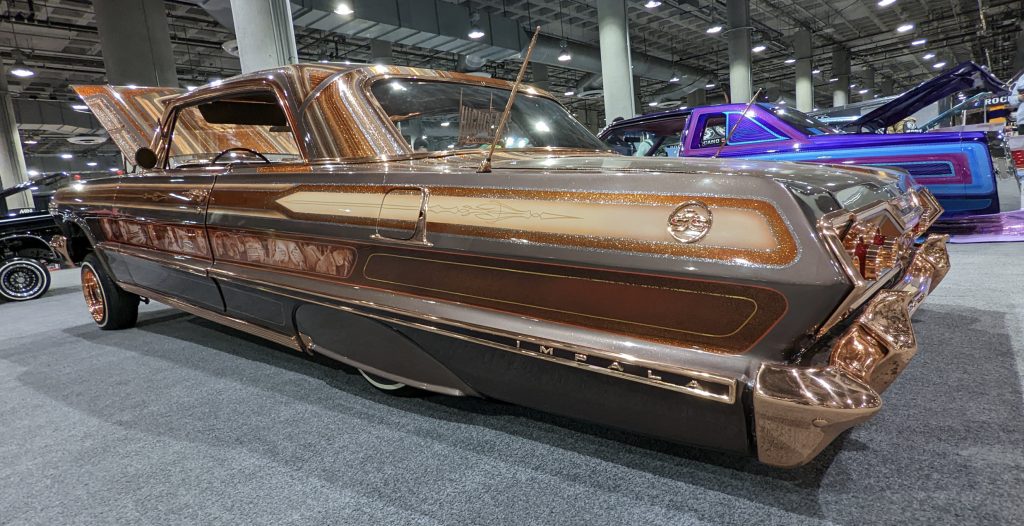 While standing outside this incredible copper 1963 Chevy Impala, Anthony broke down what we were looking at:

LS engine on it, they modified everything, they copper coated it, and then they got the rims, the laces. And then all the murals on it, the lining on it — it takes a long time. This you could do anywhere from six months to two years. Price wise, if this car was off the lot, easy $300,000. 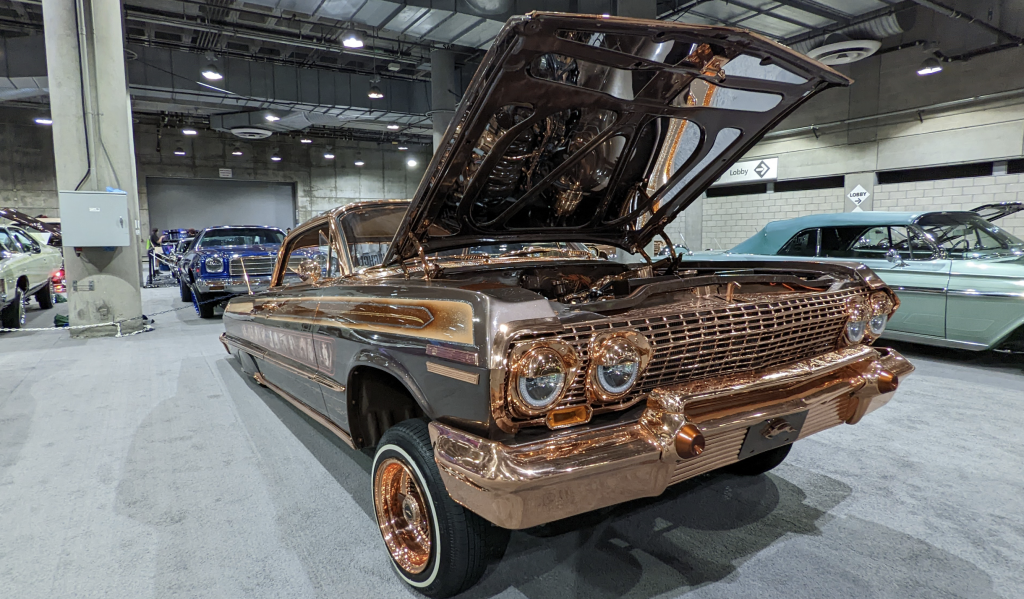 I asked about the mirrors under the cars — I knew they were there to show off the undercarriage, but was keen to learn more. Anthony’s reply:

Everything has to be done. It’s called undercarriage, so right when the judging comes in — it’s: “What do you got, undies?” — like undercarriage. The undies has to be chromed out, copper…rose, or whatever the color that they gonna use. And I know that he has it, so when they lift it and he has the butt up, you gonna see the same color matching up on the trimming.

This Impala in question belongs to the LA chapter of the High Class Car Club, the most hated, feared lowrider club out there due to its members’ incredible workmanship, Anthony told Jason and me. “They’re feared — it’s like ‘We come, and we come strong.'” This Impala and others from this club are actually cars that are driven on public roads, whereas Trailer Queens “never see daylight and they never see rain,” Anthony explained. 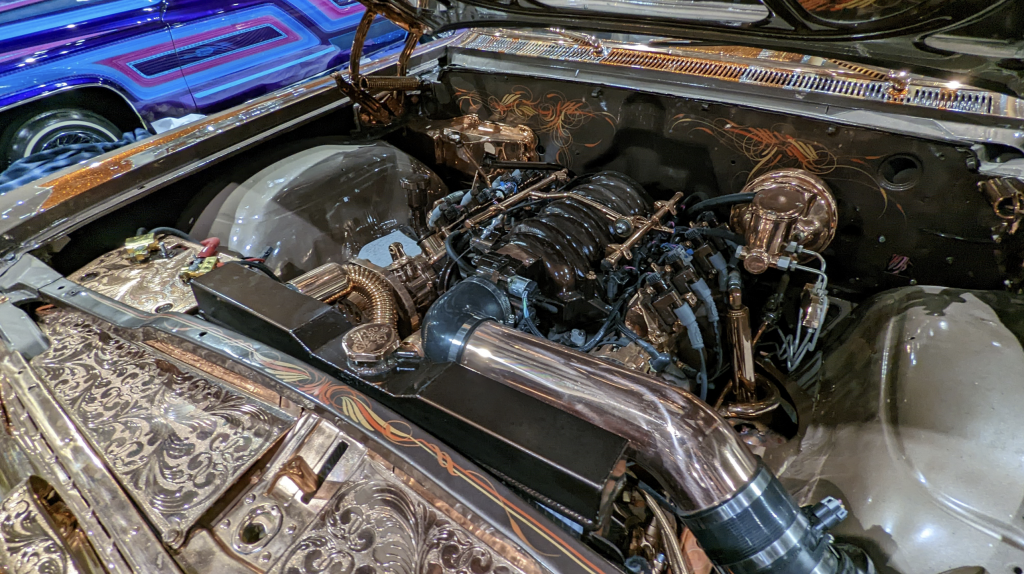 I was curious about how these machines are built, since there are so many elements that need to be meticulously created — surely it’s not all done by the same person/shop, right? Referring to the Impala, Anthony told us: “[The owner/shop] does engravement and a gold dip, chrome dip — he does it all. You trade off, you barter work. They build the vehicles, but they send out certain things.” The artwork, which was sprayed, brushed, pinstriped, and gold-leafed, probably took eight months and $40 grand, per Anthony. 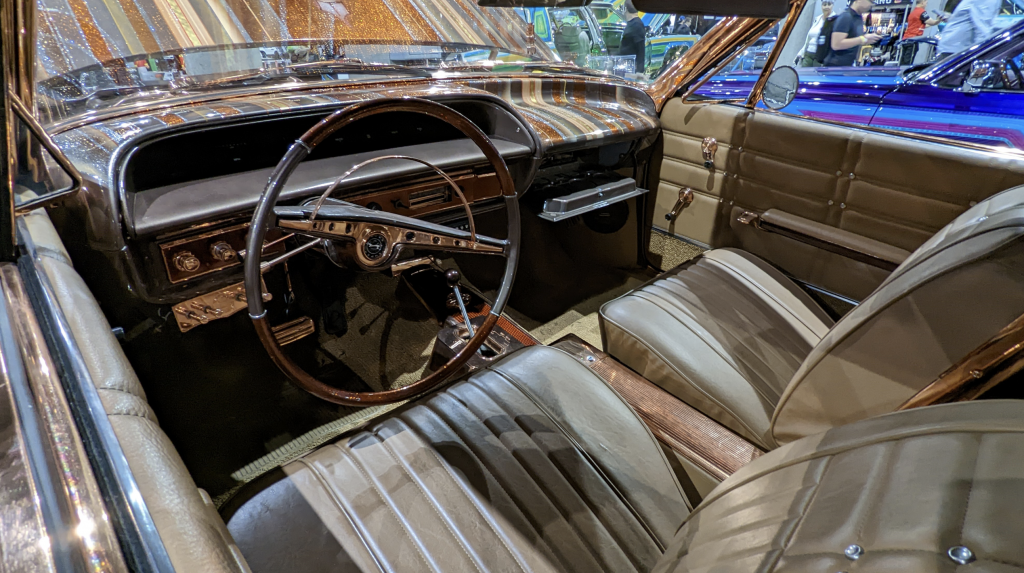 Jason and I thanked Anthony for his time, and walked around to check out the rest of the automotive art exhibit sitting there on the floor in the LA Convention Center’s basement; while we saw cars you might expect, like big-body Cadillacs and Impalas and Lincoln Continentals, we also saw some regular, run-of-the-mill malaise-era GM sedans. These are machines that are largely unloved, as they’re slow, inefficient, poor-handling, unsafe, under-styled, smog-era vehicles with pretty much only one or two redeeming qualities: they ride well, and I suppose they’re big and spacious and imposing. These rather few positive attributes, though, are apparently among the most important ones to the low-rider community. I mean, just look at the 1970s Chevy Malibu: 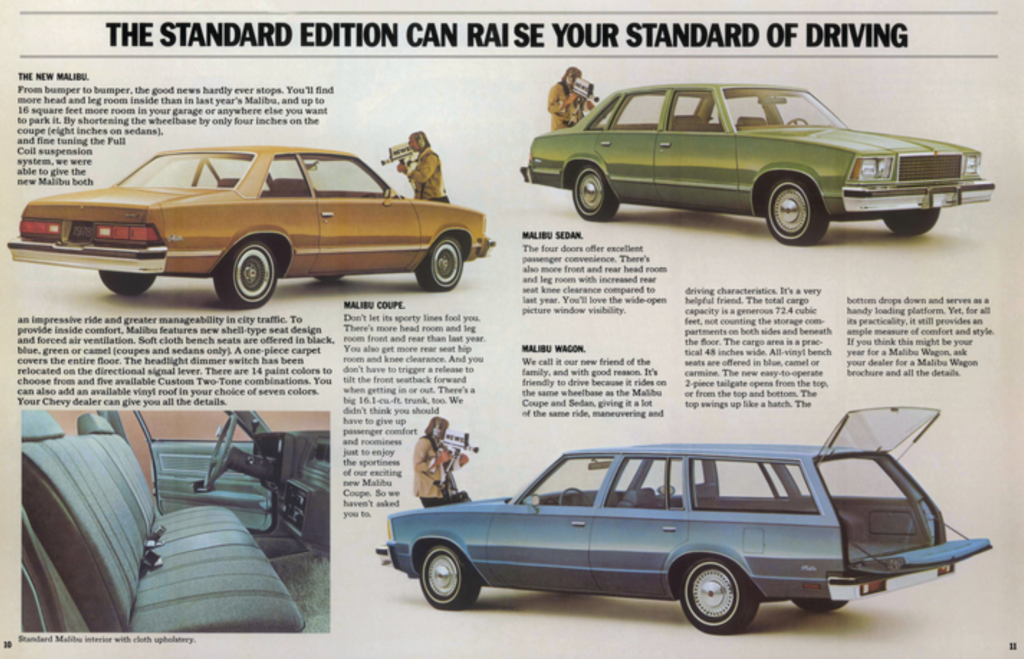 Nobody gives a damn about a 1970s Chevy Malibu, and yet someone did this to one, and it just works: 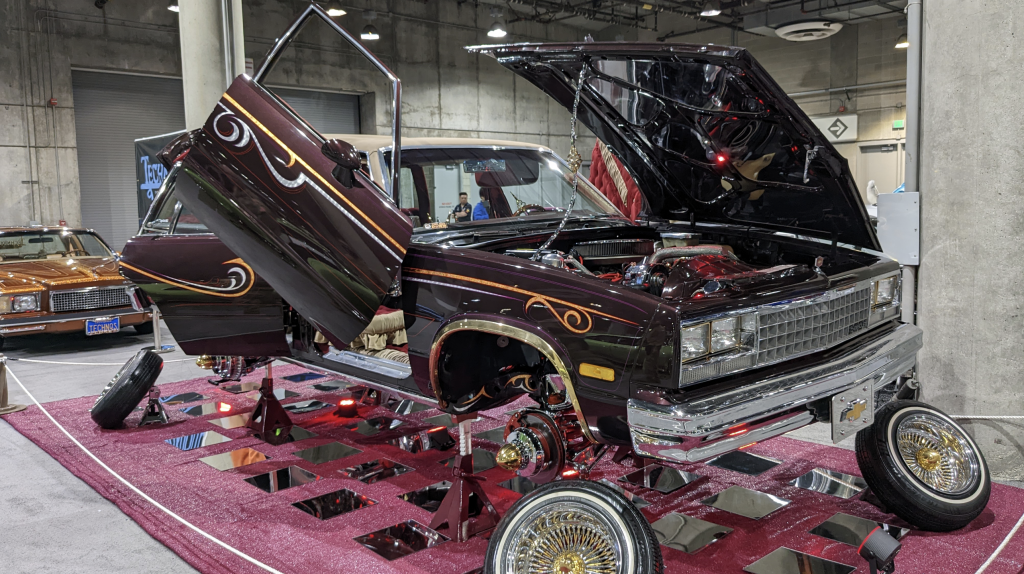 Yes, someone (the_wagon_one on Instagram) took a boring 1970s Chevy Malibu wagon that would blend into any crowd of 1970s-era cars, and turned it into a legitimate work of art: 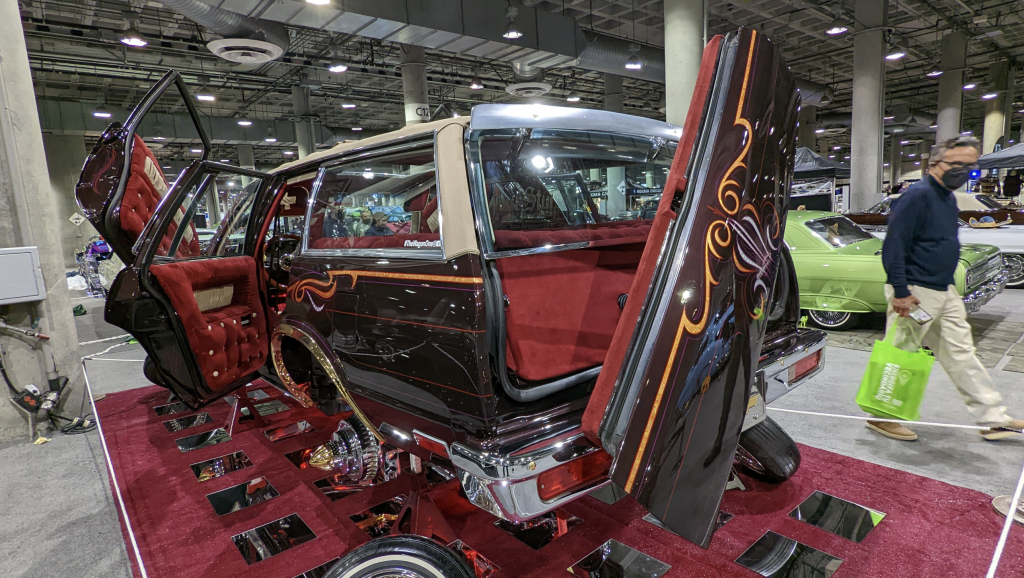 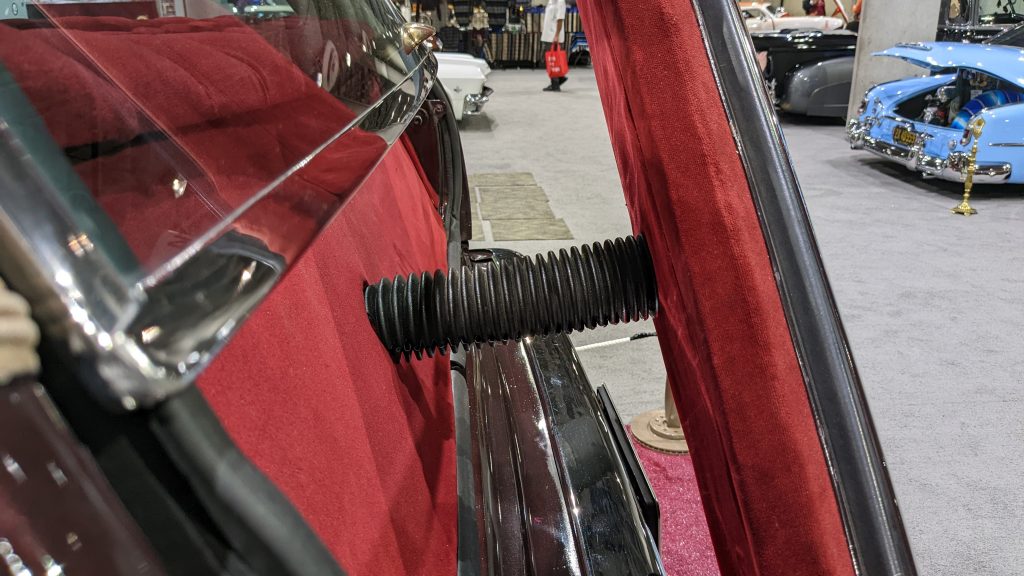 Is it over the top, with a tailgate that pops out and spins, a red velour interior, chrome everything, etc. — absolutely. But over-the-top is the whole point! And the fact that this started off as a mundane family wagon brings this into an entire new category of artistic brilliance. But I’m no expert when it comes to art, so I’ll let my artist colleague Jason Torchinsky voice his thoughts on all this. From Jason:

I call these lowriders cathedrals (see headline) because that’s what they feel like to me, and I suppose I should explain that more, since most of you don’t live in my head — only a select few. When I think of the aesthetic of a cathedral, I think about how it’s sort of a record of skill and craftsmanship and labor, all done in service of intense faith and belief, and effectively written into the very material of the building.

You see it in ornate details and carvings and paintwork and stained glass. It’s almost fractal in that way, in that you see more and more levels of ornament and design the closer you look. You can feel the time it took to do this sort of work — minute in detail and massive in scale.

No other cars save for lowriders have this same quality. Every bit of a lowrider is ornately detailed, every little bolt is worthy of aggrandizing and making beautiful. You see this sort of attention to details and a complete willingness to lavish this attention on the smallest bits of a whole all over the car, like you’d see it all over Notre Dame. It’s the same idea, just different mediums — cars instead of churches.

That’s well put, and Jason really does mean “every bit of a lowrider.” Look at that Malibu’s rear driveshaft! It’s an incredible chrome twisted shaft unlike anything I’ve ever seen: 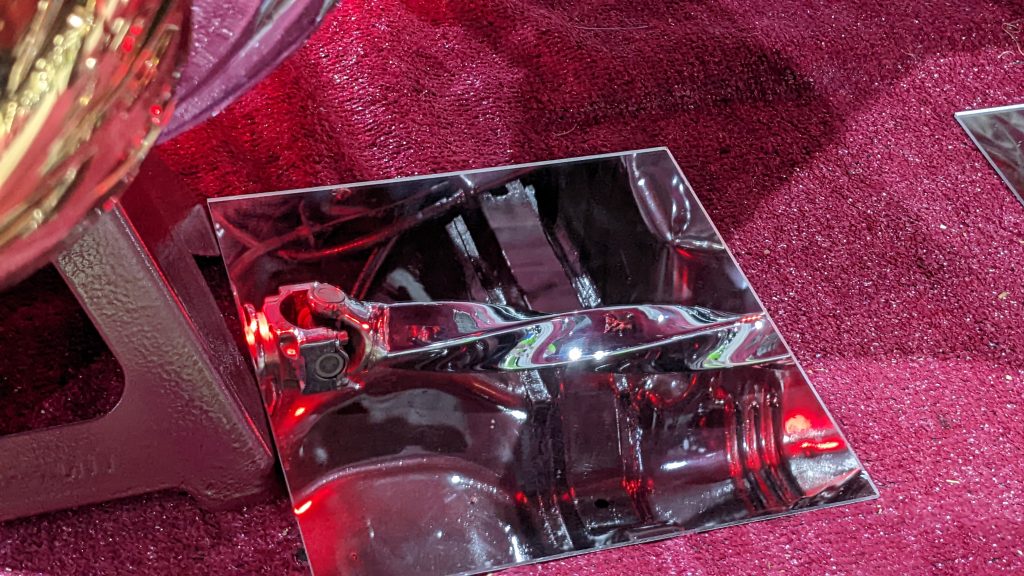 The sway bar has the same look! (It looks like a chrome Twizzler in the image below): 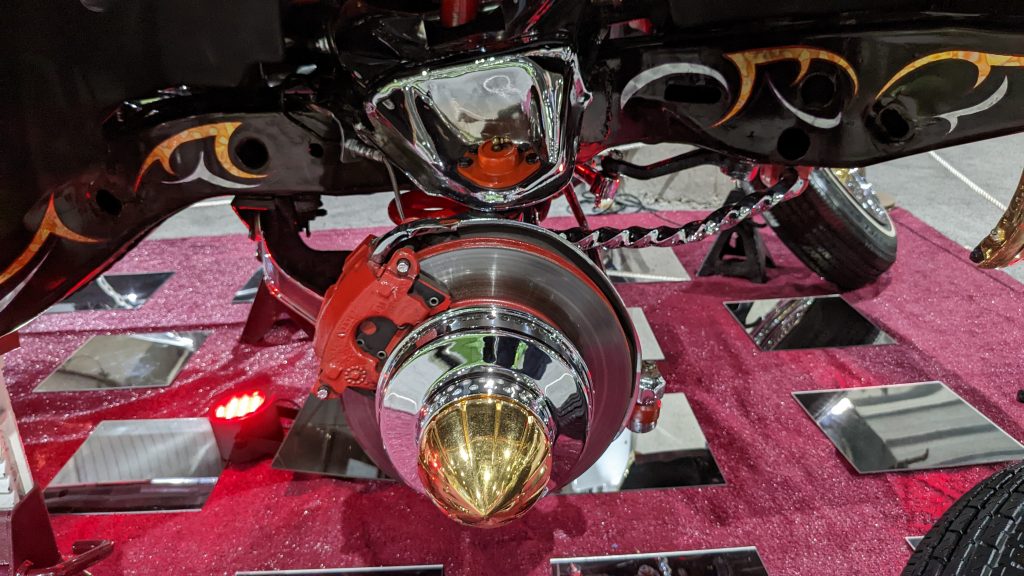 Notice all the mirrors on the floor — the builder wants to show you every surface on this thing, because every surface is a “class A surface,” as an OEM automakers would put it — that is, a surface that someone will see, and that should therefore be meticulously designed to look good. Trust me, no mainstream automaker has ever put this much effort into making sure their production car looks this good from every angle: 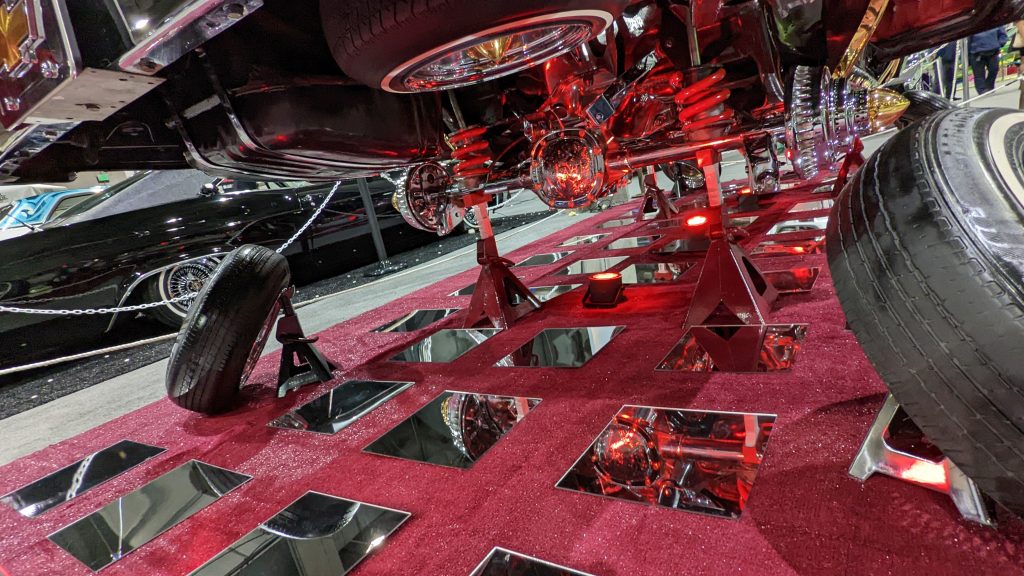 And then just look at the cabin — my god! Look at those seats!: 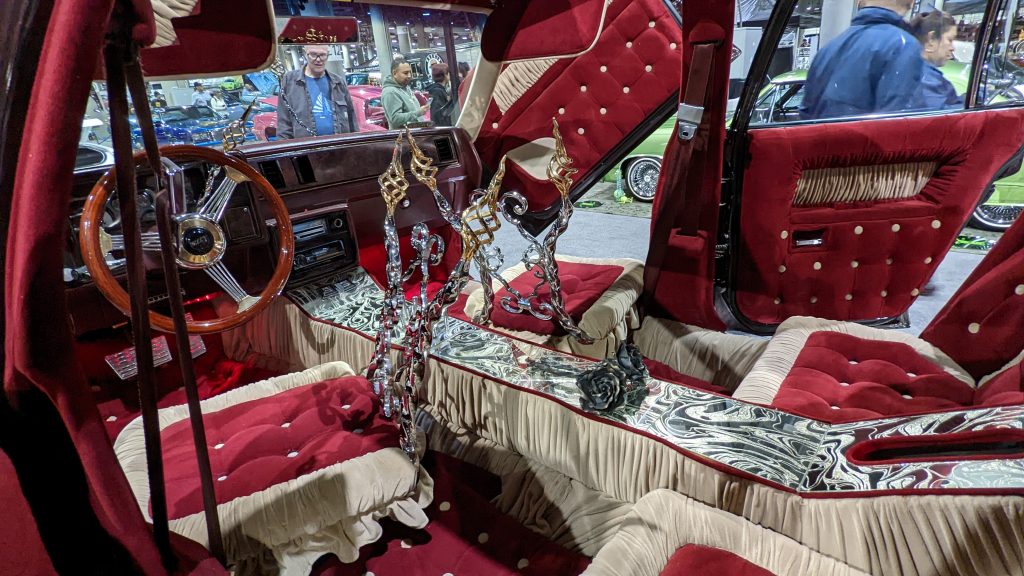 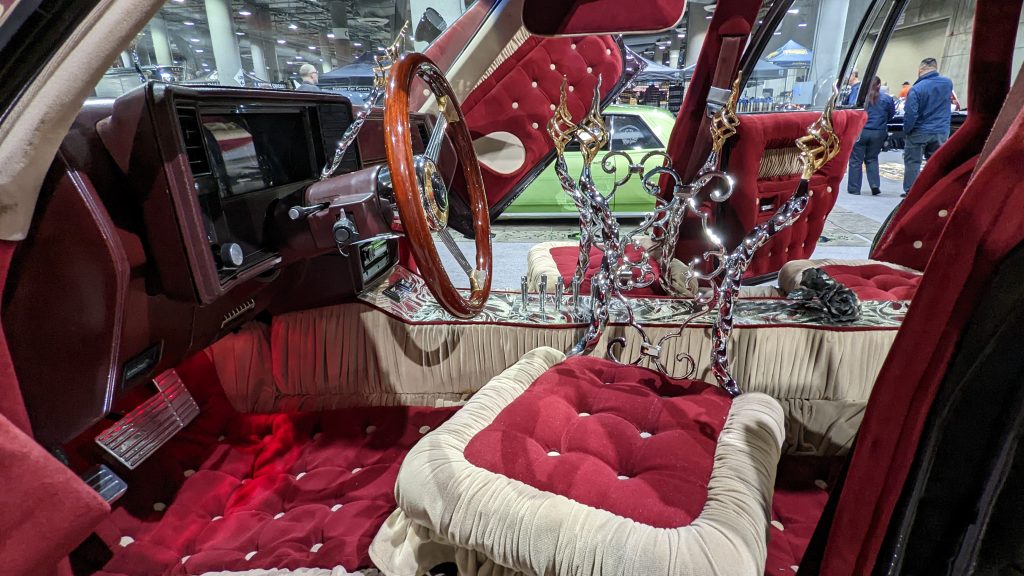 There’s something about those sharp chrome seatbacks, the red color, and that draping tan interior fabric that gives this interior a menacing, almost evil vibe — like the car belongs to the devil himself.  It’s incredible how much looking at this car makes one feel, and that’s a high compliment for any kind of art.

Anyway, here’s a look at some other gems Torch and I saw in the basement of the LA Auto Show: 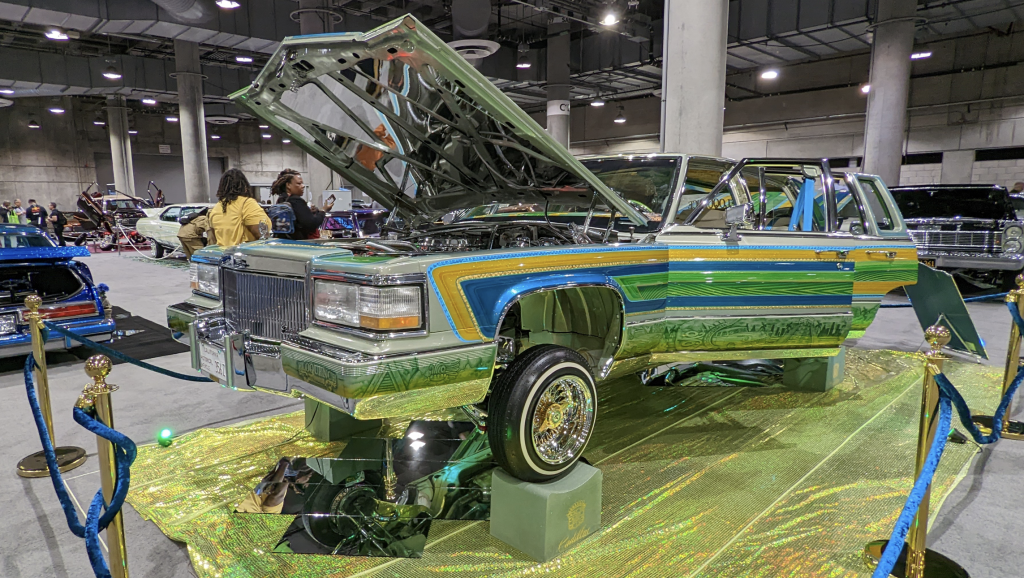 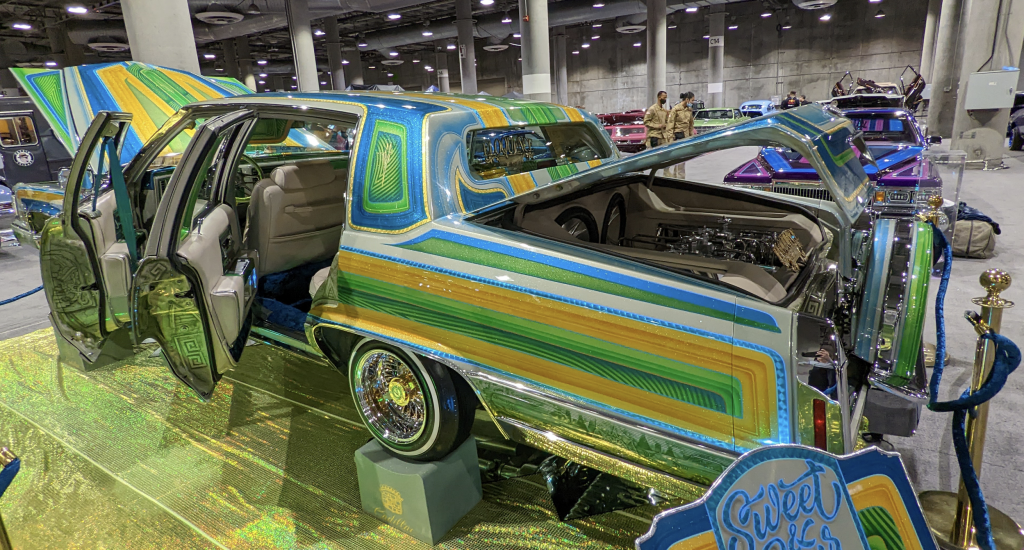 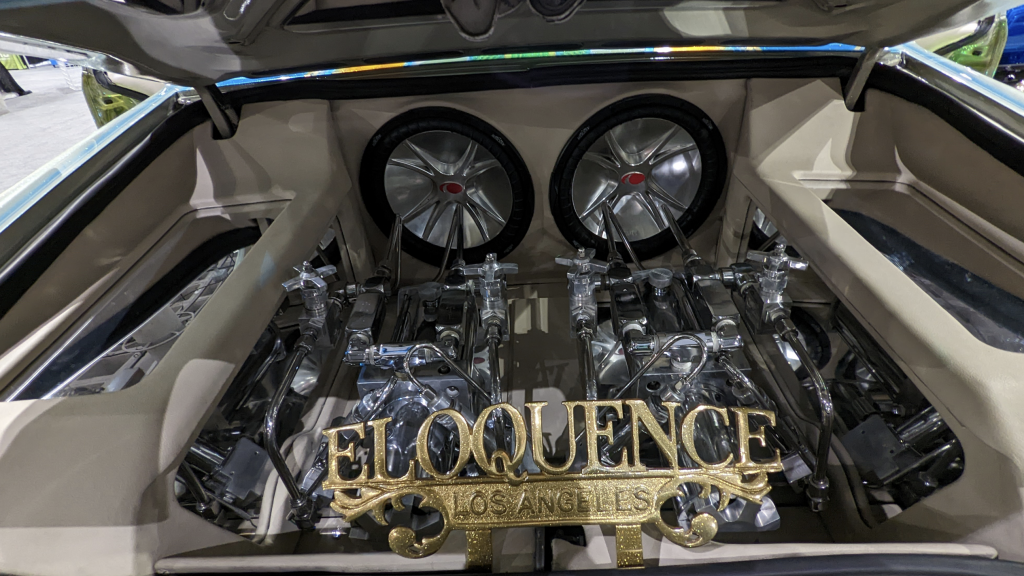 That’s a late ’80s Cadillac Brougham equipped with a beautiful trunk-mounted hydraulic suspension system. The car is part of the Eloquence Car Club in LA.

Torch and I also saw a bunch of gorgeous Impalas — that’s a nameplate that’s clearly the king of the lowrider scene: 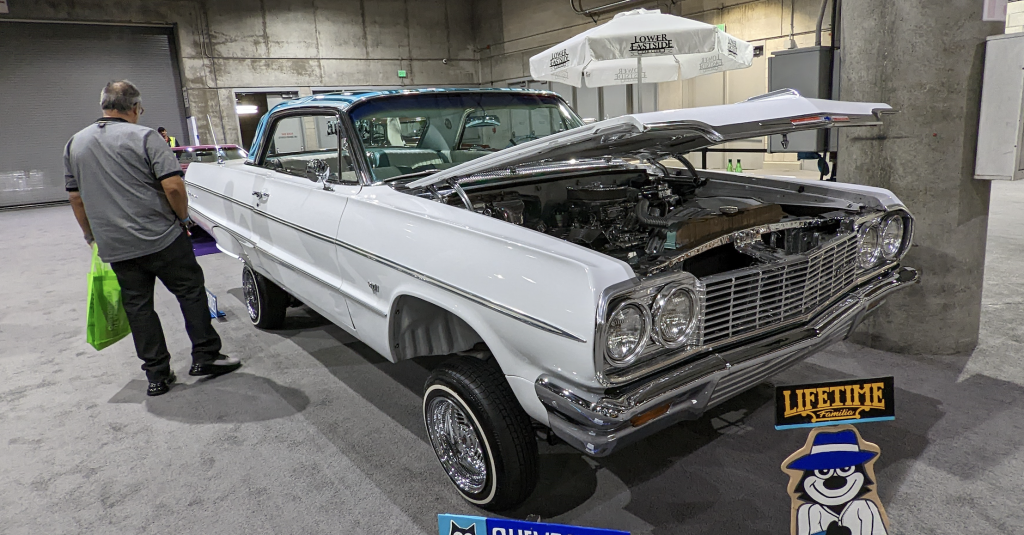 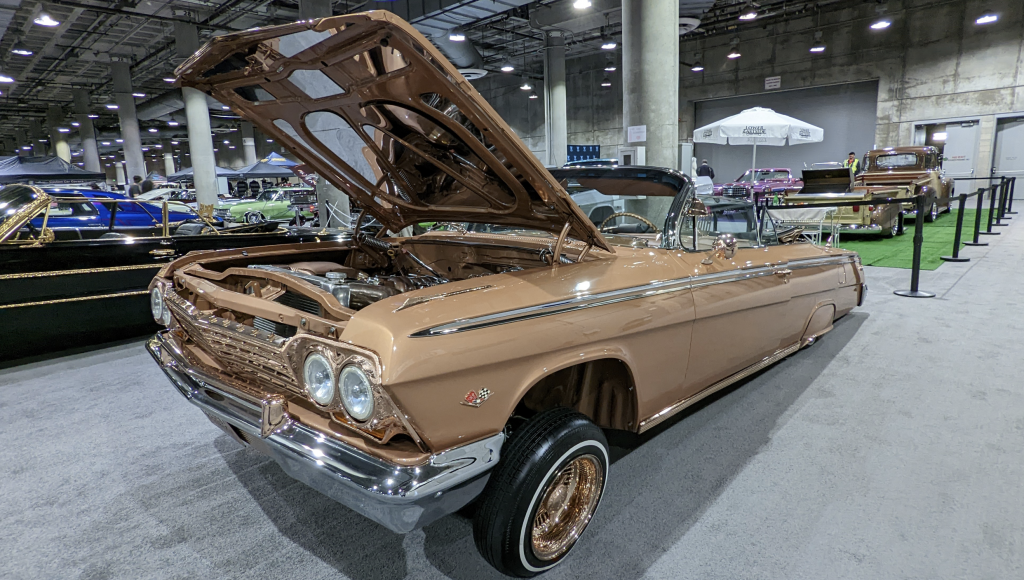 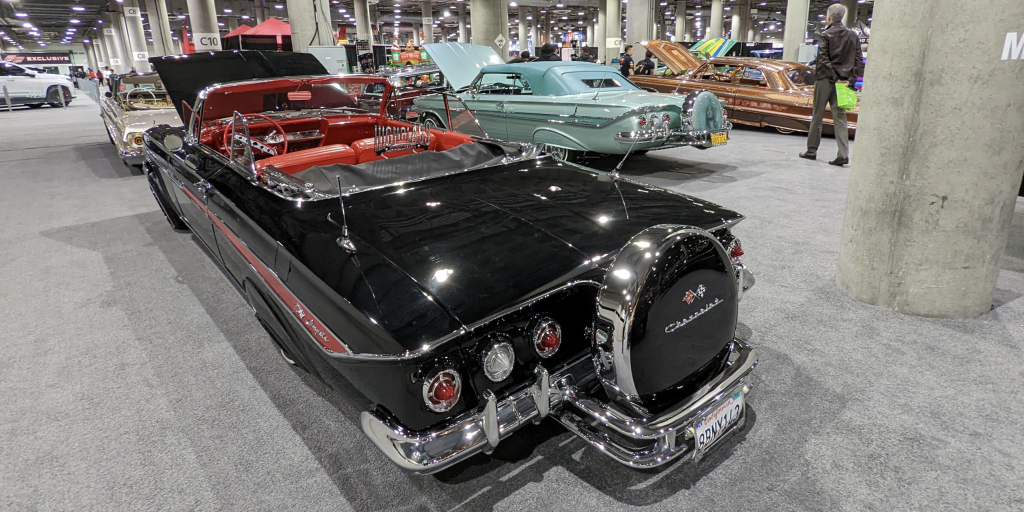 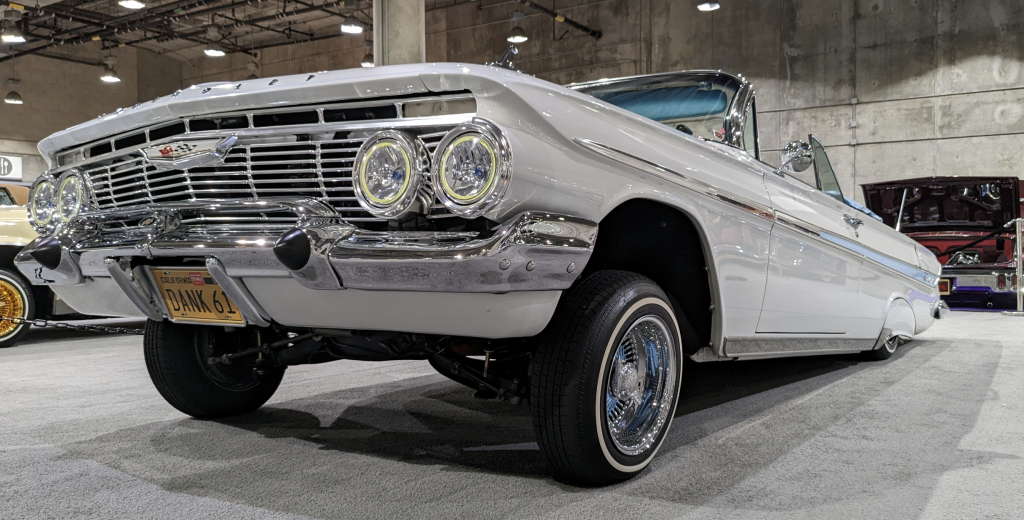 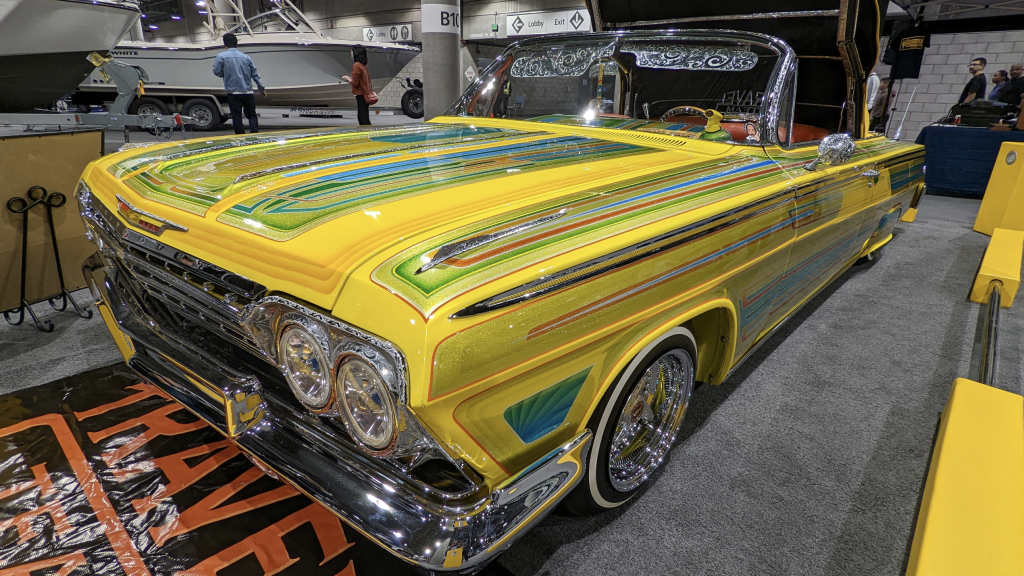 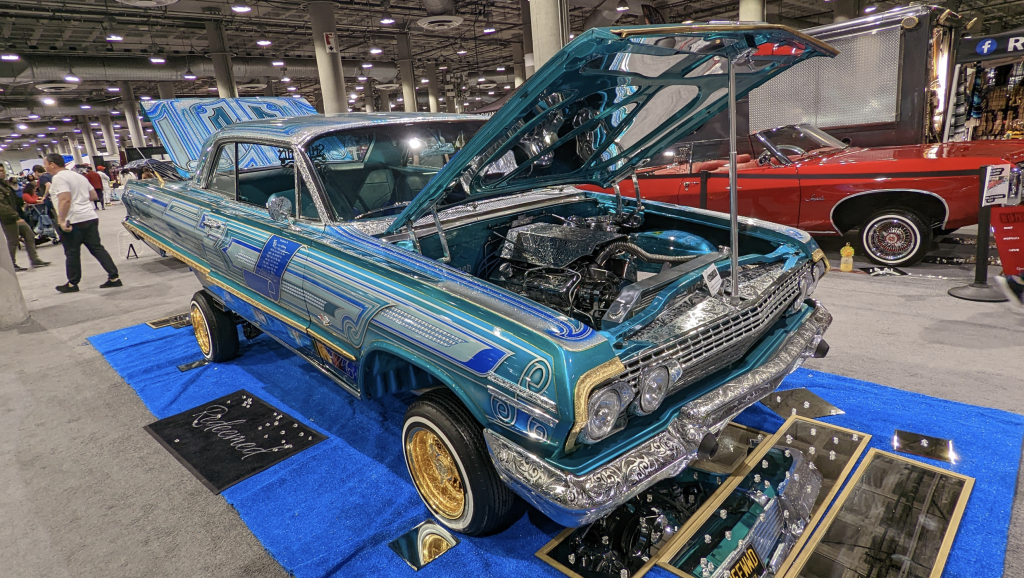 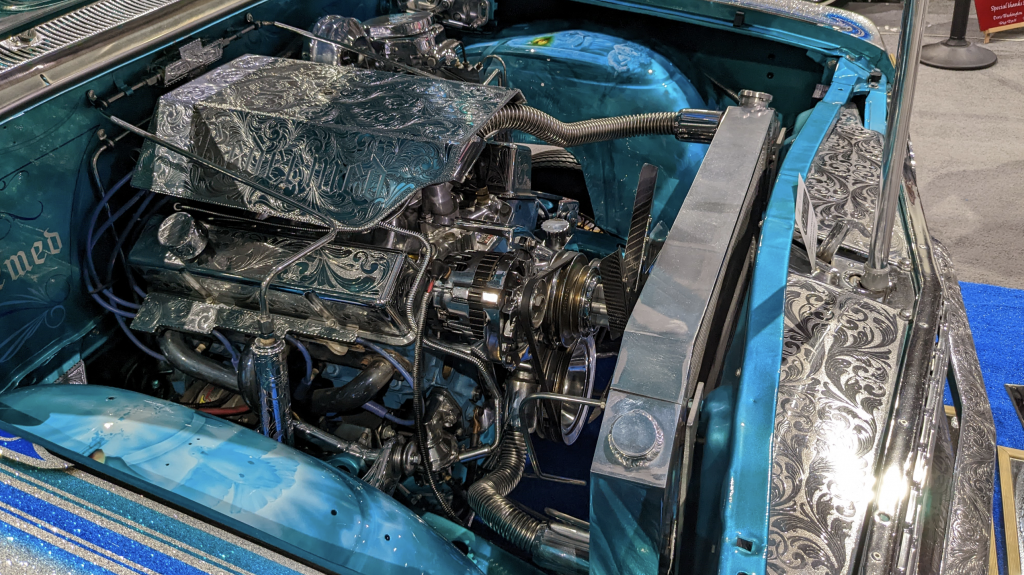 Check out the etching on the blue Impala’s engine and pump — and look at the artwork inside the engine bay! It’s just sensational! 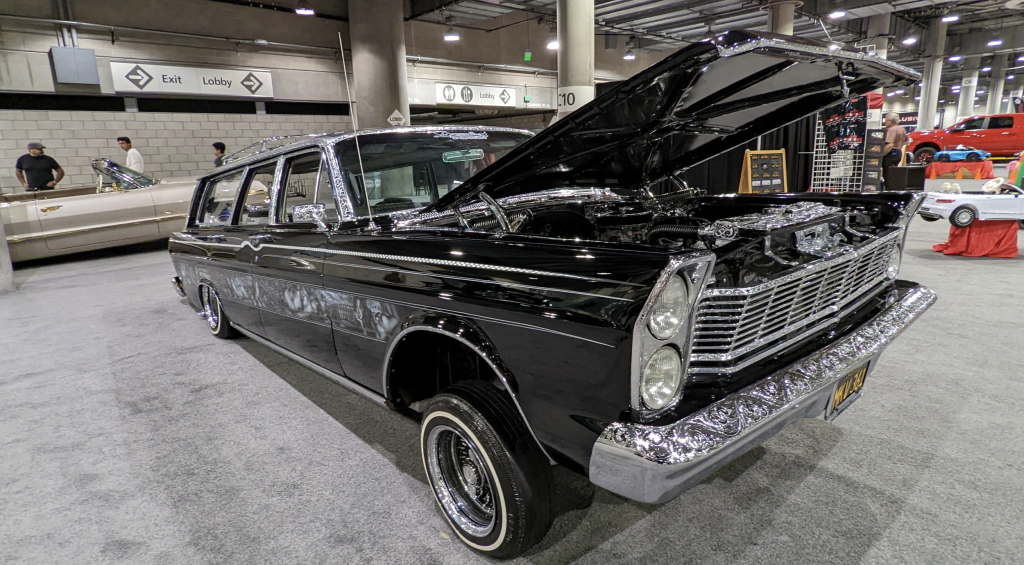 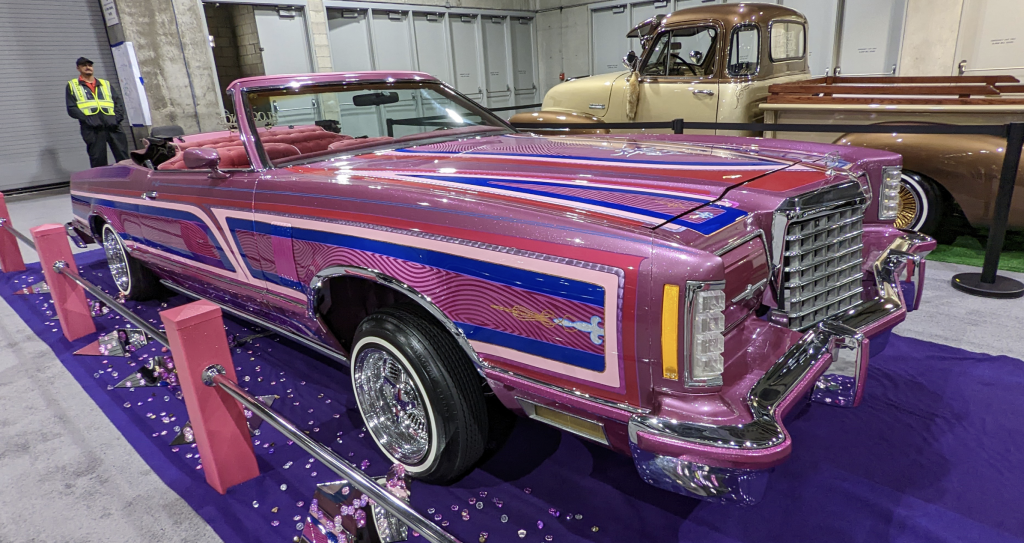 That’s a nice Ford Thunderbird and Galaxie wagon above. The paint, the chrome, the perfect interior — it’s all so vibrant and fun, which is probably what I love about this culture the most. It’s clear that the people doing this work have incredible senses of humor; I mean, the spinning rear door on that wagon — it’s just nutty!

“LA is the Mecca of lowriding,” Anthony told Jason and me before we parted ways (though he still gave love to Española, New Mexico, an incredible lowrider capitol of its own). I’m beyond excited to exploring that Mecca soon.