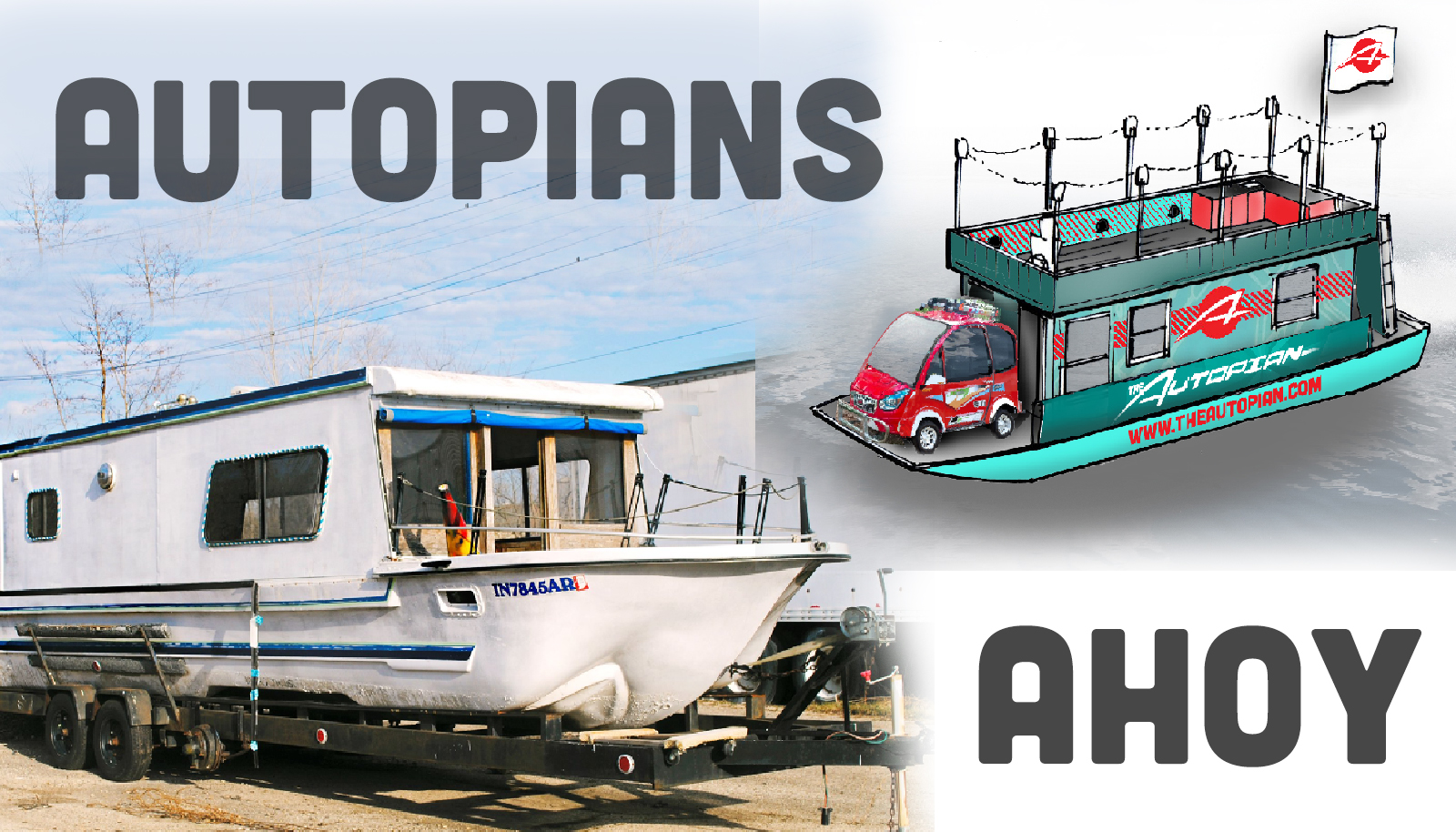 The magnitude of certain opportunities is sometimes not obvious. Things that we might perceive at first to be a curse can turn into be blessings in disguise. We were reminded of that reality the other day here at the Autopian.

Communicating on the infamous Autopian Slack channel, David Tracy was describing the odd items he had been offered in trade for one of his numerous vehicles, many of which he shared with all of you in a recent article. One of the most intriguing items to the rest of us on the team was the houseboat you see below. A freaking houseboat, because I guess anyone selling an old SUV will naturally want to replace it with a floating living space, right? 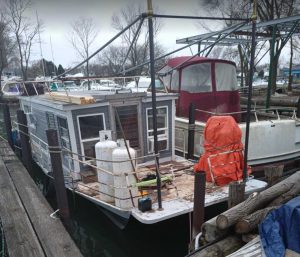 While David somehow expected us all to laugh or berate the potential boat/truck barterer for such a silly offer, the reaction was surprisingly positive from the team.

If I recall, Jason responded with a resounding “DO IT…JFC JUST DO IT” or something along those lines. Indeed, essentially all of the staffers immediately warmed to the idea of The Autopian Boat. This would be a tremendous opportunity to delve into an area of transportation that there has been admittedly a dearth of coverage of here on this site. Not only that, but this vessel could prove to be a testbed for a way to finally “flip the script” on amphibious vehicles. How could David lose?

The boat on offer is a single level. We’ll start by adding a party deck on top, complete with a low perimeter wall finished in a rough paneling we will call “SHIT-lap” (a play on “shiplap.” Also, we’re gonna cover it in graphics anyway). Speakers will be built into the wall, wired to amps in the house section below pumping out OONZ OONZ OONZ sounds for all present. There’s a wet bar added to one end, while the other features a “flying bridge” to pilot the damn thing down Lake Tetanus from up there. Retractable tiki torches can hold string lights. 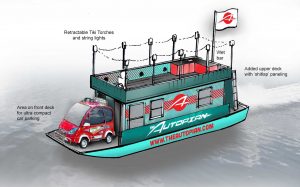 There appears to be a rectangular front “deck” to this houseboat that a bold man offered David for his Chevy Tracker; this would be great for a car to park so you’d have a “land dinghy” to drive places when you reach your destination (like some barges do). However, the deck appears to be too small for a car unless you had staffers with Smart Cars or a Changli. And as luck would have it:

But maybe we don’t need to have a little car on board. We’ll just drive the boat on land. Say what? How?

Well, today’s electric “skateboard” car chassis systems are so low profile, flat, and self-contained, we are finding that they can underpin almost anything. A questionable-condition houseboat absolutely qualifies as “anything.” 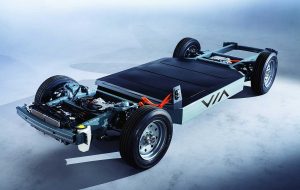 Presenting NautiSled, an answer to a question that you’d be afraid to ask, and probably should be.

Here’s how it would work. You start by positioning the NautiSled unit at the boat ramp half submerged like you would with a trailer. 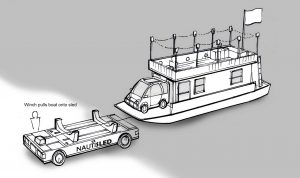 You would use either RC car-type controls or something rather similar to a gamer system controls (see below) to move the Sled (but with gauges like a speedometer that will be needed later, or a holder for your phone or tablet that could sync up with the NautiSled app and provide speed, battery info and such). 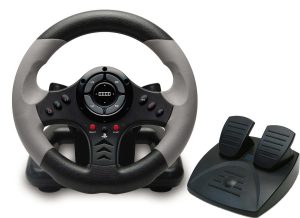 A winch pulls the boat into position on holders mounted to the top of Nautisled.

Once secured in position, you place the controls into whatever forward facing position on the boat that works for you. For this thing, you could put them up on the ‘”lying bridge” up top for a commanding view, or even inside the forward-facing Changli. This would be a wired controller of course; wireless is certainly possible but even if you don’t fear death I am sure that someone on board this monstrosity would. 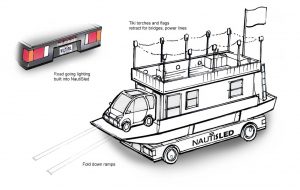 I particularly like the idea of this tiny low-powered Changli seeming to be the face of this big-assed thing. It’s sort of like the giant vehicle in Fury Road that had a w123 Mercedes limousine as the ‘driving’ compartment.

I mean, with around 64 horsepower, the real 240D limo was only marginally faster than the tombstone replica that exists in a New Jersey graveyard:

Anyway, the nice thing is that on most boats, the pilot sits on the right hand side, so the controls for operating he NautiSled unit could be mounted ahead of the “front passenger” seat of your vessel and you’d be driving on the correct side of the boat/car for the United States. Then you hit the road!

The NautiSled features headlamps, signals, and area for a license plate so you would at least be legal there. Of course, driving on the street in a vehicle with no seat belts, no air bags, and the possibility that a collision could allow the boat on top of the sled to become a flying machine might make this legal nowhere in America except the State of My Mind. Still, add a few lap belts, strap the boat down real good and all is well.

[Editor’s Note: A bit of an aside: For years, Jason has been suggesting that Automakers build amphibious capability into vehicles, especially minivans. One of his main points is that the boat doesn’t have to be great — it just has to float and be fun. People will like that. Recently, there’s been disagreement among The Autopian’s cofounders about whether it’s more important for an amphibious car to be a good car or a good boat. This zany mockup by The Bishop is clearly a better boat than it is a car. But for someone who has some property in a nice small town with various canals, it could be fun. Boat around, then drive into town for lunch, maybe launch somewhere else — ideal. But that’s a narrow use case. I agree with JT: Good car, bad boat for amphibious vehicles. -DT]

This SUV-For-A-Boat trade would be a win-win-win for everyone from David that gets a good deal for a car he no longer needs, Autopians that get a place to party like it’s 1999, and the transportation world that gets a new mode of amphibious motoring.

What could possibly go wrong?

Would You Sleep In An RV Made Out Of A Hearse? – The Autopian

Read All My Posts »
PrevPreviousHere Are The Cheapest Cool Cars Set To Cross The Auction Block At Paris’ Legendary ‘Retromobile’ Classic Car Show
NextWhen It’s Time To Say Goodbye To Your Car: Tales From A Service AdvisorNext